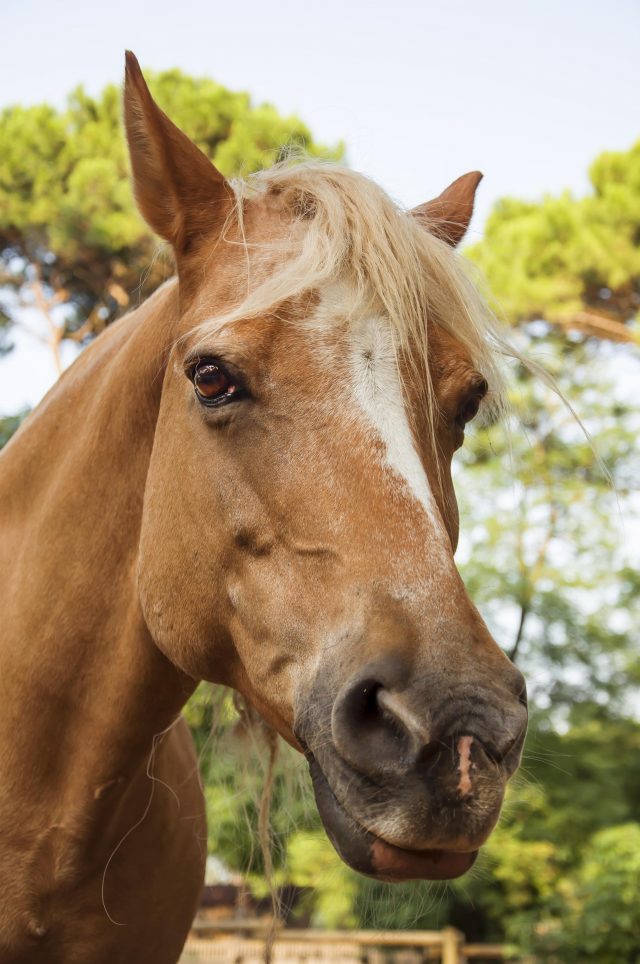 Lindsey Partridge has a new filly in the barn, but when she arrived she wasn’t quite ready to learn. Read about how Lindsey recognized the horse’s stressed state and what she did to address it.

This past month I purchased a new filly — an adorable palomino APHA three-year-old I named “Shiney.” It’s short for Shine Like a Diamond. She has some really nice reining bloodlines and shows a lot of performance potential. She is by Big Shiney Gun out of Diamonds To Cash.

She shipped to me in Ontario from Florida through a commercial shipper (because of the pandemic only commercial shippers can haul horses). When she got off the trailer everything seemed normal, but when I went to touch her ears she really got freaked out, rearing up very high in the cross ties.

Now this could be a young horse that is just upset, but interestingly when we went in the arena to do some groundwork and lunging the next day, she made some very big rears again. They were impressive — right up on her back legs, not just mini threats. She also did reared some more in the cross ties when I was looking at her ears. 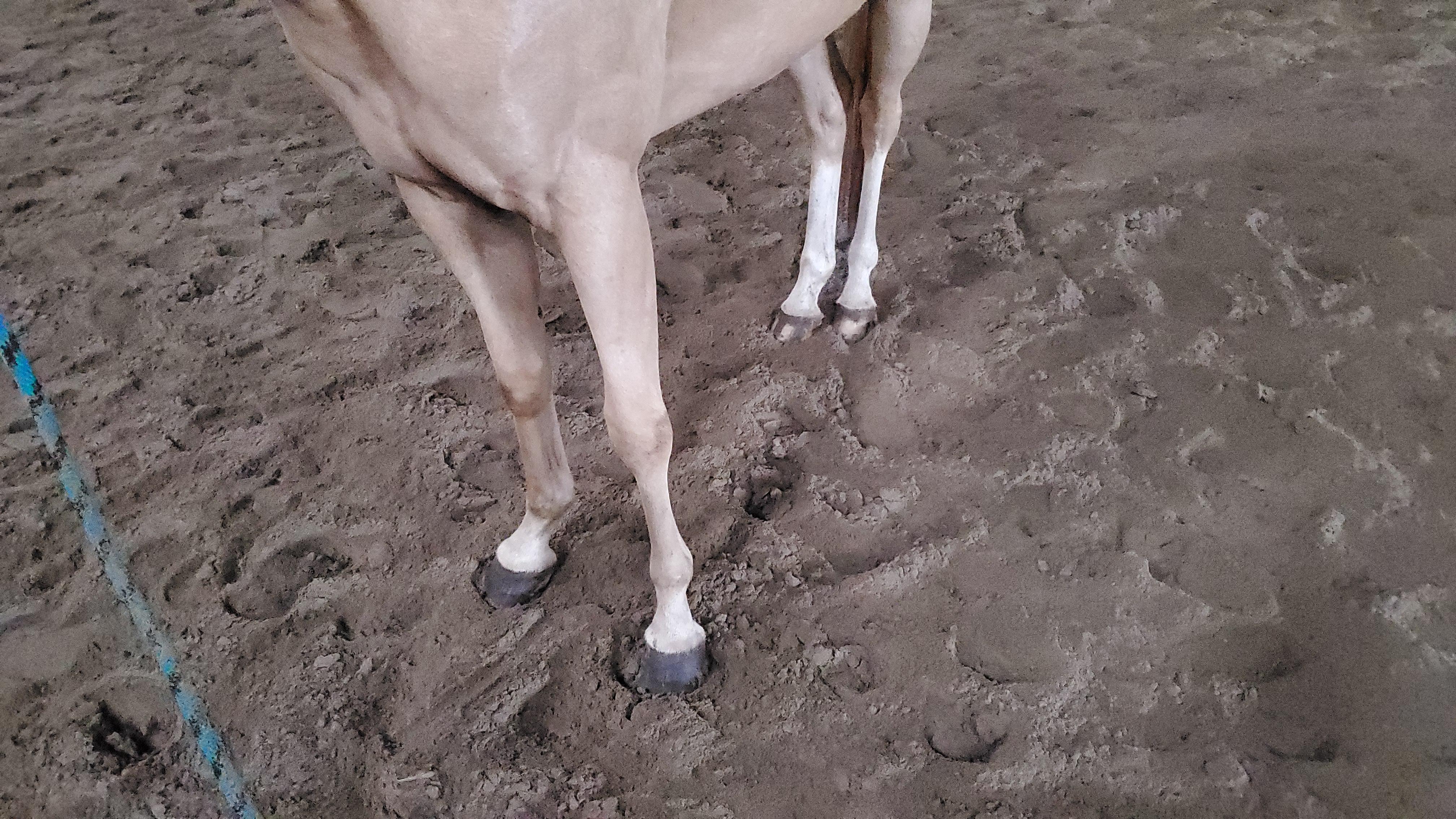 Shiney before the relaxation work, standing defensively with her front hooves spread and back legs together. Photo by Lindsey Partridge.

Although she doesn’t have much training, she had some handling and lunging experience and never any issues. I’ve also trained several wild Mustangs (and countless other breeds and horses) without having this issue. So what happened?

There were some other signs that gave us some clues. She seemed to hold her head up and was making an upside-down U-shape with her body rather than a more rounded shape. Essentially, she looked like she was using her lower muscles and not her topline muscles, she was very reactive to her head and ears being touched, especially at her poll. She was also attracting more flies than other horses, even other palominos in the same field. 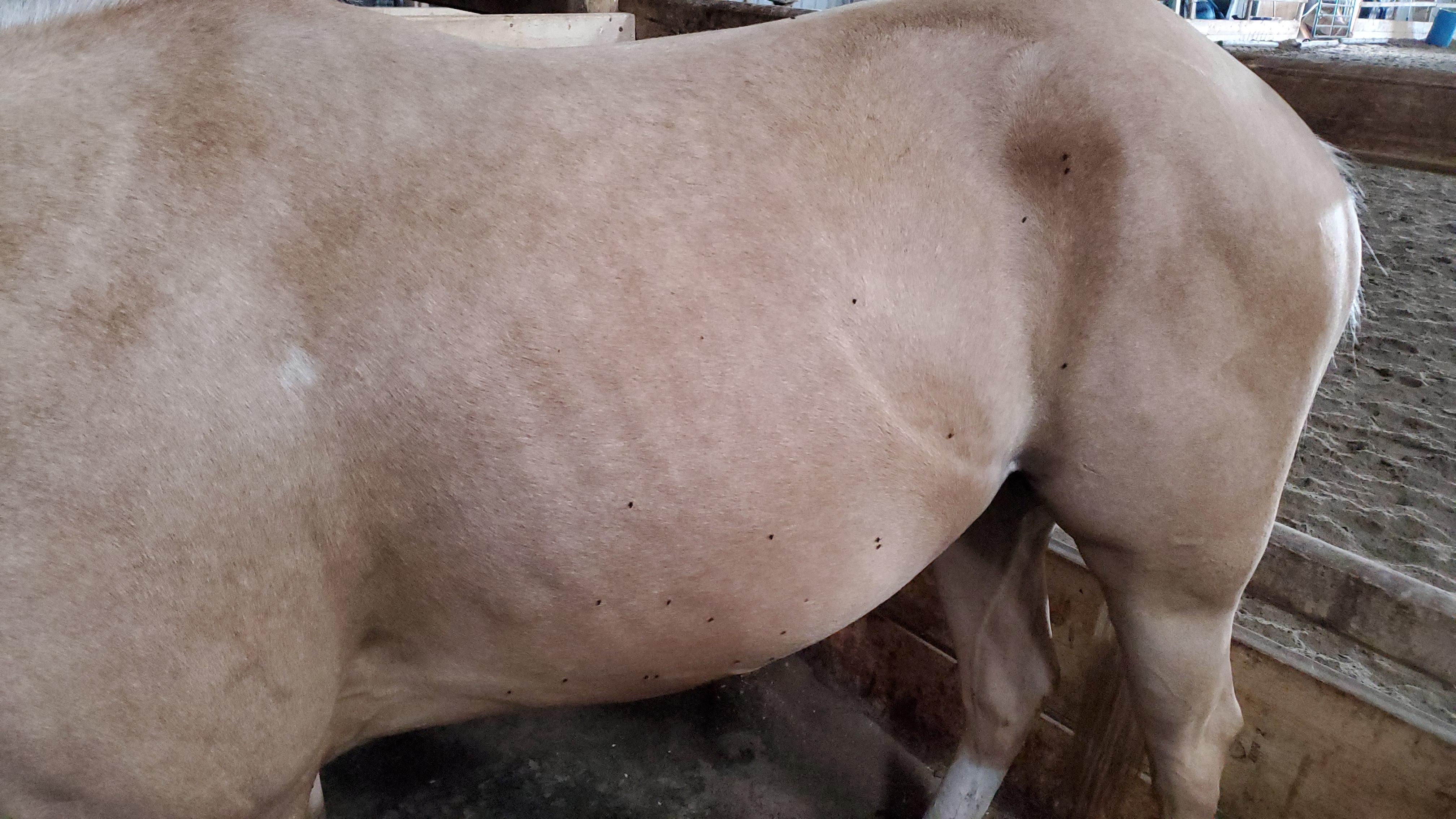 These are all signs of being stuck in the sympathetic nervous system. What does that mean?

Why does it matter if a human or horse is in SNS or PNS? The sympathetic (SNS) division generally prepares the body for an emergency and puts you in fight or flight mode.

The parasympathetic (PNS) division is for ordinary circumstances and lets your conserve, restore, play, learn, heal and digest. For example, if you are in sympathetic division your heart rate is increased, your airways widen, your body releases stored energy, pupils dilate, hair stands on end, and body processes that are less important during emergencies (such as digestion and urination) slow.

It is possible for your body (and a horse’s body) to be stuck in sympathetic division — sometimes that can be triggered by an event or stressful situation. This can cause a horse to be very reactive because they are stuck in fight or flight mode. In my filly’s case she was rearing to try to escape what she felt was pressure and was easily triggered into this response.

How do you help a horse get out of SNS (fight or flight mode)?

There are many things you can do to trigger the PNS (rest, digest, learn, play mode) including:

I practiced some lowering of Shiney’s head after doing some calm connection exercises. It was incredibly interesting, after just a couple minutes her knees started buckling and she actually face planted into the dirt. It was like she was crashing so hard off of an adrenaline high that she was being flooded with endorphins and she was so overwhelmed by a sensation of relaxation that she literally fell. 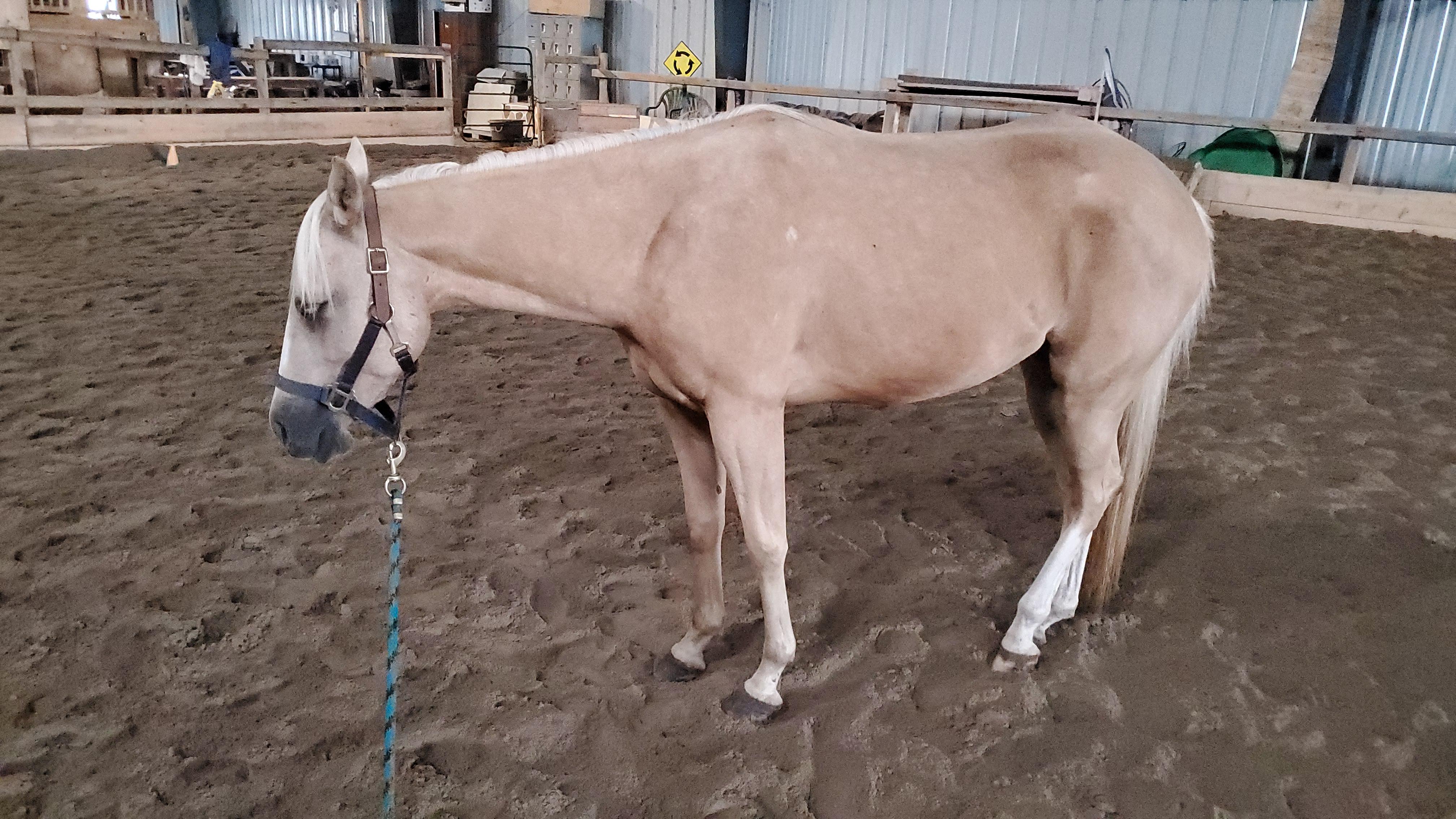 Shiney in a more relaxed posture after she letting go of tension. Photo by Lindsey Partridge.

Even when I asked her to lunge and worked on her confidence with a hanging curtain she found very scary, there was no rearing  and we haven’t seen the high rears since.

So why did Shiney get triggered into SNS?

I think the long trailer haul triggered Shiney to go into sympathetic division — maybe she bumped her head while on the journey. When I went to look at her ear (because there is a sarcoid there I wanted to inspect), I probably triggered her fight or flight instincts. Being lunged may have felt like a lot of pressure. She was good for walk/trot and when I asked for canter is when we got the explosion of rears. When a horse is in SNS it is easy for them to seem like they are overreacting — they are already in fight or flight more and are very alert. It can take very little to trigger them.

What were the signs the horse was stuck in SNS (fight or flight)?

Now Shiney is doing really well and we are starting training. Her mind needed to be in the PNS first before she would be able to learn and process information. Now that she’s there, we can look forward to the training ahead. 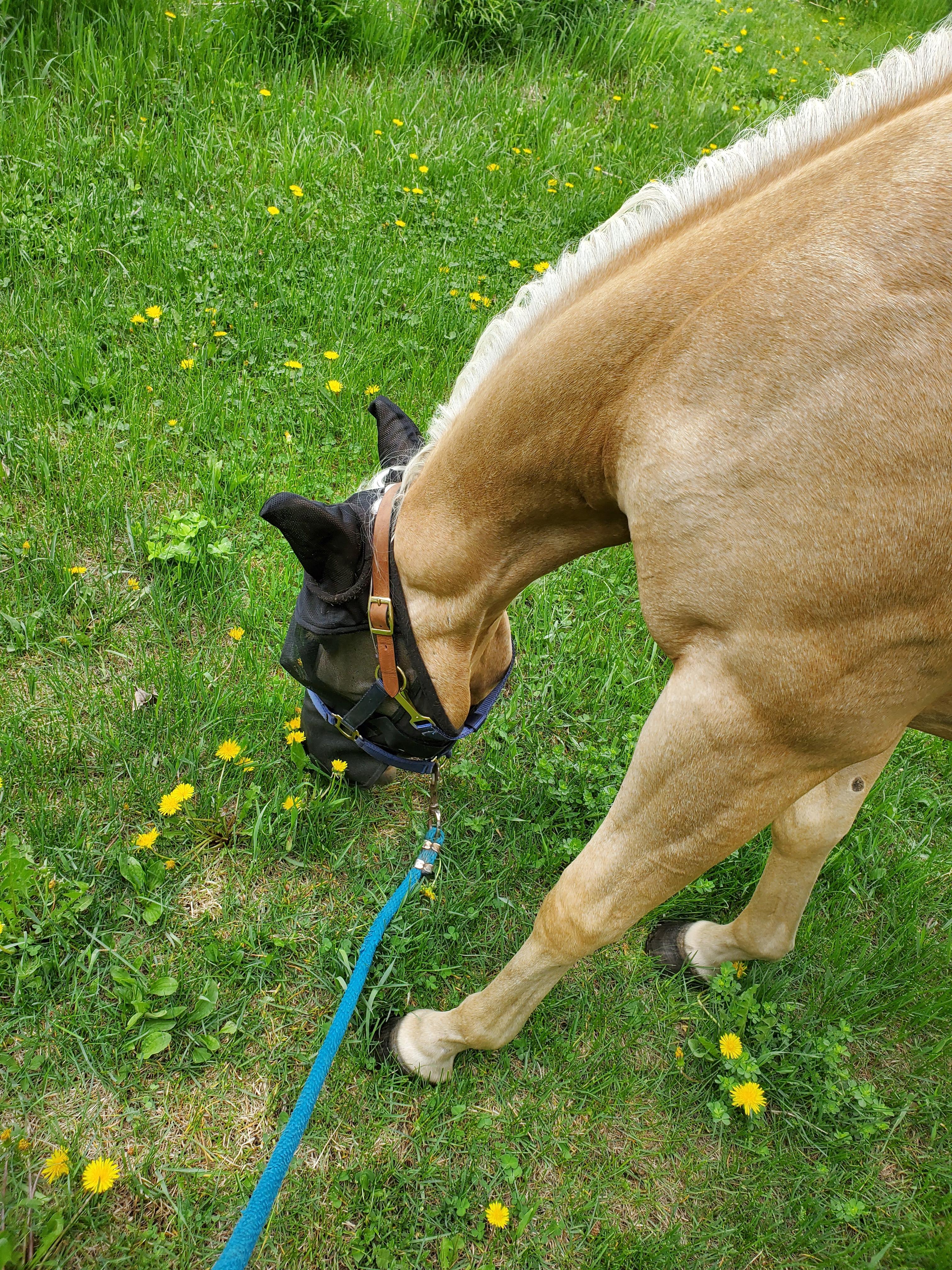 Hand grazing Shiney just to hang out a bit. Photo by Lindsey Partridge.

This video of Shiney shows what I am talking about with the flies and the different postures she is standing in:

The lesson we learned this month is that we need to help a horse be in the right frame of mind before we can expect them to learn, heal or be responsive to our requests. Being able to recognize if a horse is in SNS or PNS is an essential skill, and how to help them be in PNS is crucial to having a successful and safe relationship with horses.

Lindsey Partridge is a multi-year champion and top-five finisher of the Thoroughbred Makeover in a variety of disciplines; she has also competed and placed highly in Mustang Training Challenges. She is the founder of Harmony Horsemanship. Find out more at www.HarmonyHorsemanship.ca or www.LindseyPartridge.com.