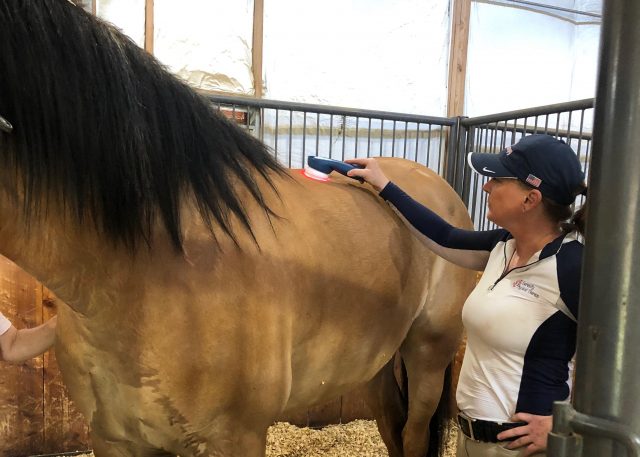 Sharon Classen is a prominent equine and human physical therapist in Omaha. She has come to the aid of the Omaha Police Mounted Patrol Unit to help treat the horses that worked the protests surrounding the death of George Floyd.

The Omaha Police Mounted Patrol Unit was founded in 1990. In 2005, ConAgra Foods built a state-of-art equine facility for the horses. With many fans in the community, the unit’s 12 to 14 horses regularly receive donations of tack, trailers and even new stablemates. But what they’ve sorely needed lately is physical therapy. They’ve been on the front lines of violent riots that erupted alongside protests surrounding George Floyd’s death. While they’ve been trained for crowd control, what they’ve faced is physically and mentally more like working in a war zone, says Sharon Classen, the prominent equine and human physical therapist who lives in the Omaha area.

“I’ve never seen anything like it,” she states. Long a friend of the City’s Mounted Patrol, Sharon received a call from a director in the early days of unrest following George Floyd’s May 25 death.

“He said, ‘We may need to vacate. The horse barn is a soft target: it could be set on fire,'” Sharon relays. She immediately offered her family’s Serenity Ridge Farm in nearby Bennington to house the horses if that threat materialized. “Stop and think about that,” Sharon states. “For anybody who owns a barn and has horses they love, as these officers do, think about the scare of having your barn lit on fire.”

Being on stand-by was not enough for Sharon. The lead physical therapist for the World Equestrian Games in 2018, she normally spends much of her life traveling the show circuit to help horses and their people prevent, recover from or manage injuries related to their sport. She’s known for long days of scheduled appointments made longer by fulfilling impromptu requests.

“Can I come down and help?” Sharon asked the Mounted Patrol officer. At his relieved “Yes,” she packed for the half-hour trip from the family’s Serenity Ridge Farm to downtown Omaha.

Into the truck went icing and wrapping gear, handheld RRT and multi-radiance laser and vibration equipment. The “MASH” (Mobile Army Surgical Hospital) unit they made included a portable nebulizer to treat horses who’d inhaled tear gas. Most importantly, she brought strong, highly-skilled hands: her own and those of her adult daughter and fellow horsewoman, Kelly Davis, to assist.

With veterinarians on the scene for wound care and immediate pain relief, Sharon “did all the things I normally do, but in a very acute setting.”

Working alongside unmounted law enforcement, the Mounted Patrol officers and horses have sustained serious physical injuries and traumas. Sharon shudders to think that’s the reality for police horses in cities throughout the country.

“They’ve had big rocks, bricks and water balloons filled with urine thrown at them and people screaming at them. They’ve had Molotov cocktails and firecrackers thrown at them. They are standing on cement for 15 hours a day, just like the officers are. The most tragic thing is the look in their eyes when you walk in their stalls. They are listless. Like droids…machines. As a horse person, it is gut wrenching.” 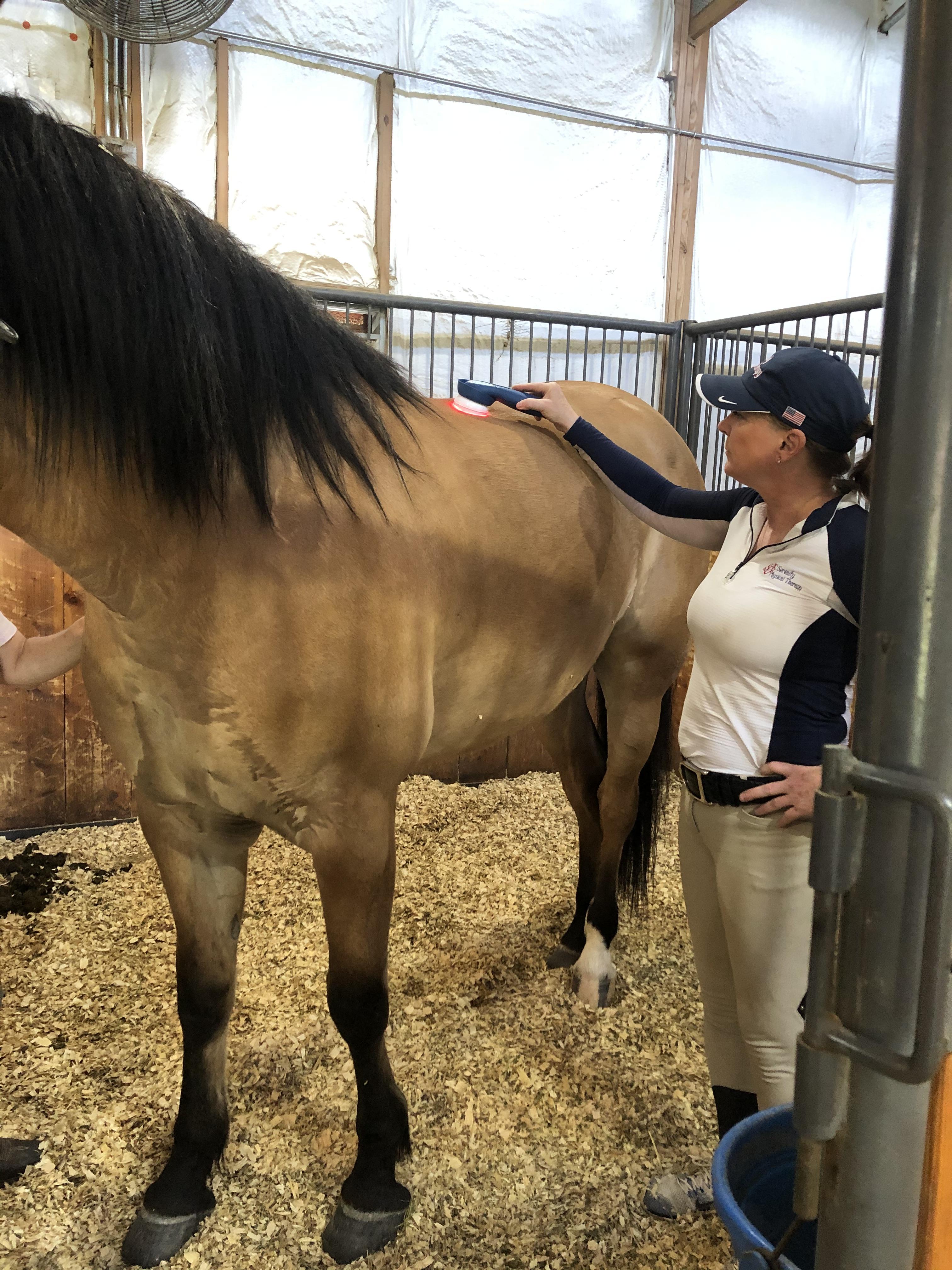 Sharon Classen using a multi-radiance laser shower on an Omaha Mounted Police horse. He had a brick dropped on him from a second story window. Photo provided by Kim Miller.

She doesn’t want accolades for doing something that comes naturally. She doesn’t share the frontlines experience for recognition. And she has no qualms about horses having police work careers. They were trained for it and typically have an aptitude for it that enables them to enjoy what is often a mostly ambassadorial role in their communities.

She shares the story because she wants fellow equestrians to know the impact of these unprecedented circumstances on the horses. “I’ve been working in equine sports medicine for over 40 years, including the WEG, where the stakes were very high. This is something I’ve never experienced before. It’s really unbelievable and I want the horse community to know what these animals are enduring. Horseman would be aghast if they understood.”

Every horse’s job has physical wear and tear, Sharon notes. The high-performance equine athletes she cares for on the circuit have the advantage of cutting-edge medicine, body work and physical therapies. The wear and tear on the riot horses is beyond the pale and beyond the physical. Where the show horse gets scheduled rest and recovery, the Mounted Patrol horse stays on or returns to the job for however long the crisis continues. While they are well cared for in normal times, they don’t have access to sport medicine’s latest advances and equipment. Already tight budgets have been stretched thin by overtime.

A relentlessly positive person, Sharon has faith things will eventually settle down throughout the country. As of the first weekend of June, that had happened in Omaha. Witnessing and participating in the City’s return to peace has been an honor. “It has made me even more proud to be an America,” Sharon says of how all facets of the community came together.

On Monday June 15, the gates at her Serenity Ridge Farm and rehab facility will welcome the Mounted Patrol horses for critical R&R. The horses’ downtown barn is beautiful and safe normally, but they are city dwellers without access to expanses of fresh grass, fresh air and quiet. “We are going to put them out in pasture to rest,” Sharon says. “We’re going to feed them, clean them, let them be horses. I hope it will help. I hope they won’t have PTSD. When horses are psychologically stressed, it always manifests physically.”

Fortunately, they’ll be recovering in the care of one of equestrian sport’s top providers of what they’ll need most: TLC and 40 years of physical therapy expertise.

The Omaha Mounted Foundation is a non-profit 501c3 organization that supports the Mounted Patrol’s horses. If you would like to donate, visit www.omahamountedfoundation.org. Or, reach out to a local Mounted Patrol unit in your area.