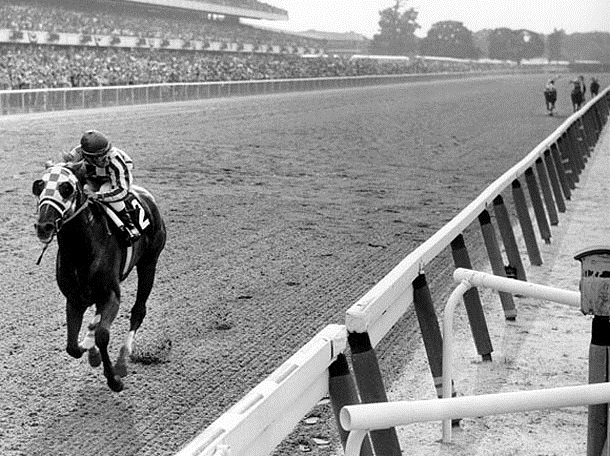 “He is moving like a tremendous machine!” On June 9, 1973, Secretariat won the Belmont by 31 lengths.

On this day in 1973, the legendary Secretariat made history. He won the Belmont Stakes to become the ninth Triple Crown winner and the first in 25 years.

Only four horses competed against Secretariat for the 105th running of the Belmont Stakes, including Sham, who had finished second in both the Derby and Preakness, along with three other horses thought to have little chance by the bettors: Twice A Prince, My Gallant and Private Smiles. With so few horses in the race, and with Secretariat expected to win, no “show” bets were taken. Secretariat was sent off as a 1–10 favorite to win as a $2.20 payout on a $2 ticket and paid at 20 cents more – $2.40 – to place.

Before a crowd of 67,605, Secretariat and Sham set a fast early pace, opening 10 lengths on the rest of the field. After the six-furlong mark, Sham began to tire, ultimately finishing last. Secretariat continued the fast pace and opened up a larger and larger margin on the field. CBS Television announcer Chic Anderson’s described the horse’s pace in a famous commentary: “Secretariat is widening now! He is moving like a tremendous machine!”

In the stretch, Secretariat opened a 1/16 mile lead on the rest of the field. At the finish, he won by 31 lengths, breaking the record for the margin of victory, which had been set by Triple Crown winner Count Fleet in 1942 (Count Fleet won by 25 lengths). Secretariat’s win on 1½ mile dirt track was the fastest in history — 2:24 flat, which broke the stakes record by more than two seconds. This works out to a speed of 37.5 mph for his entire performance, and the record still stands. No other horse has ever broken 2:25 for 1½ miles on dirt. If the Beyer Speed Figure calculation had been developed during that time, Andrew Beyer calculated that Secretariat would have earned a figure of 139, the highest he has ever assigned.

We still get chills watching the race.

5,617 winning parimutuel tickets were never redeemed. Presumably bettors held on to them to keep them as souvenirs (and the payout was only $2,20 on a $2 bet).