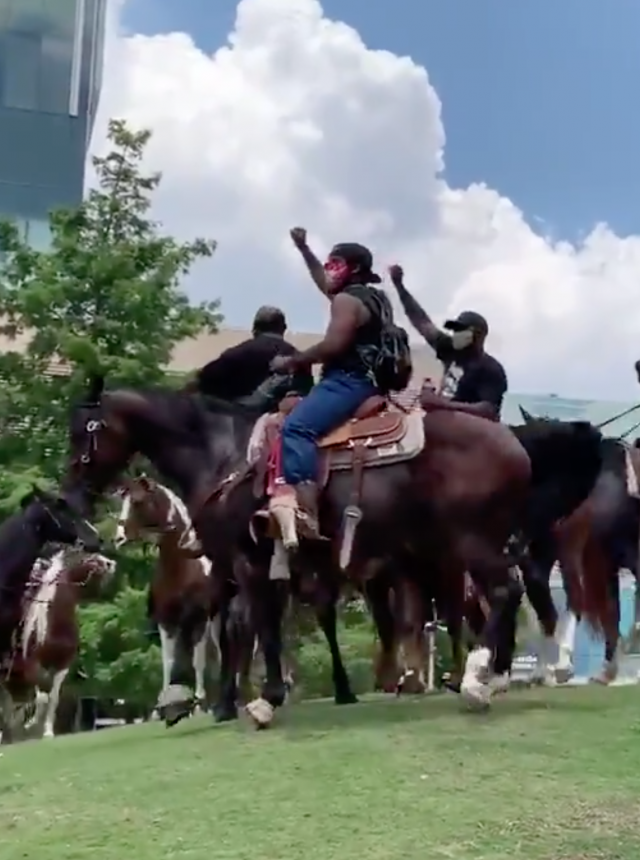 Take a look at how this urban trail riding club is making its voice heard.

Thousands of Black Lives Matter demonstrators took the the streets of Houston on Tuesday, June 2, 2020 to protest the death of George Floyd. Among them were about 50 protestors on horseback. According to Mike Hixenbaugh of NBC News, these horsemen are the Nonstop Riders, an urban trail riding club based out of Houston, TX.

Look at these complete badasses in Houston pic.twitter.com/EyGy4BvRlO

One of the riders told Hixenbaugh, “We’re here representing for all our black brothers and sisters.”

Cheers rose up from the crowd as these dudes rolled up. Clip-clip-clip-clop. pic.twitter.com/x1h8UpmyQy

The protesters gathered in Houston, where Floyd grew up, to show their support following his death last week. Floyd’s death was the latest in a series deaths of people of color at the hands of white police officers. Floyd was arrested on May 25 in Minneapolis after he allegedly used a counterfeit bill at a local Cup Foods convenience store and was pinned down by Minneapolis officer Derek Chauvin, who kept his knee on the black man’s neck for several minutes. In videos showing the arrest, Floyd can be heard repeatedly saying that he could not breathe. Floyd died shortly afterward.

Some protests in response to Floyd’s death have turned violent and many states imposed a curfew or activated the National Guard to assist local police. However, on Tuesday, Texas Governor Greg Abbott became the ninth governor to turn down the use of federal troops to contain the protests.