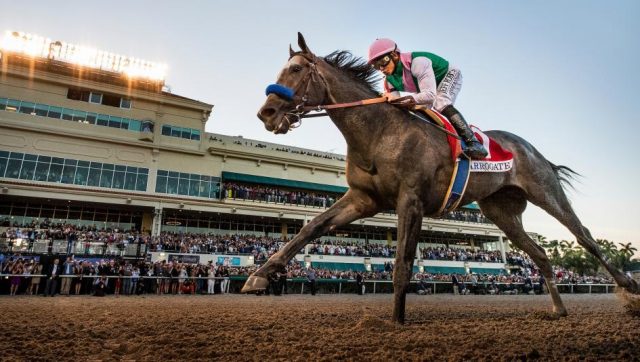 With the passing of Arrogate, we want to take a moment and look back on his performance in the 2016 Breeders’ Cup Classic.

On June 2nd, Juddmonte Farms confirmed that its champion and four-time graded stakes winner Arrogate (Unbridled’s Song – Bubbler – Distorted Humor) had to be euthanized. The stallion’s death came after a battle with an illness that began last week.

The seven-year-old stud was purchased from Clearsky Farms as a yearling at the Keeneland September sale by Khalid Abdullah’s Juddmonte Farms for $560,000. He had one of the most impressive racing careers in recent history. After three wins in California, he took first at the Travers Stakes in August 2016. After that her overtook California Chrome in the Breeders’ Cup Classic, only to best him again in 2017 at the inaugural Pegasus World Cup Invitational.

After winning the Dubai World Cup Sponsored by Emirates Airline in 2017, he was retired that fall with a record of seven wins from 11 starts and over $17.4 million in earnings.

The nature of Arrogate’s illness is still unclear. Up until last week, he was having a successful breeding season. However, breeding had to be suspended due to a suspected neck injury. Later in the week he went down in his stall and could not get back up. The staff at Hagyard Clinic worked to determine the cause of the illness, but despite performing all available tests, including spinal tap evaluation, X-ray, ultrasound, CT scan and many blood tests, Arrogate was unable to stand after four days. Further health complications led to the decision to put him to sleep. A post-mortem is currently being conducted.

“We will never forget the ride Arrogate took us on,” said Juddmonte general manager Garrett O’Rourke. “Those four amazing races established him as one of the great racehorses of our time, breaking two track records, taking down champion California Chrome in a battle for the ages, and then running by Gun Runner  in another worldly performance in Dubai. We hope that the heartbreak of losing him so young can be soothed by proudly watching the achievement of his runners.”

So, in honor of Arrogate, here is the 2016 Breeders’ Cup Classic:

Cheers, Arrogate. You will be missed.