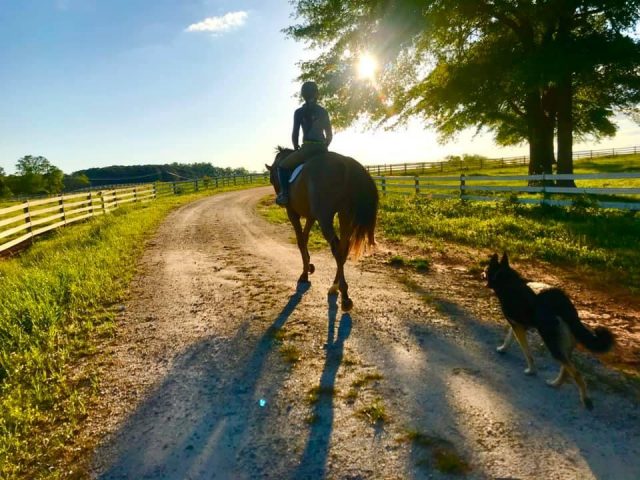 May 28, 2020DeAnn SloanContributor#RETIRED RACEHORSE PROJECTComments Off on Trust Your Gut: Aubrey & Boomer

“For the past couple months, every time I would turn out Boomer, I would watch as he galloped up and down the hills, trotted the flats and meandered happily… There was no discernible lameness, no limping or visible short-step, but something still wasn’t adding up.”

For 616 accepted trainers, the journey to the Retired Racehorse Project‘s 2020 Thoroughbred Makeover and National Symposium, presented by Thoroughbred Charities of America, has begun! Over the next eight months, four of those trainers will blog their journeys, including their triumphs and their heartbreaks, successes and failures, for Horse Nation readers. This week Aubrey Graham discusses the importance of trusting your gut when it comes to analyzing your horse’s soundness.

In the sixth months of post-track training, Boomer (JC Vanderboom Ridge) is well-muscled, shiny and one social Thoroughbred. He nickers when I come to say hi, loves his friends and enjoys time outside and his meals (thanks, MadBarn!). But despite his transformation into the impressive horse he has become, something still isn’t right. 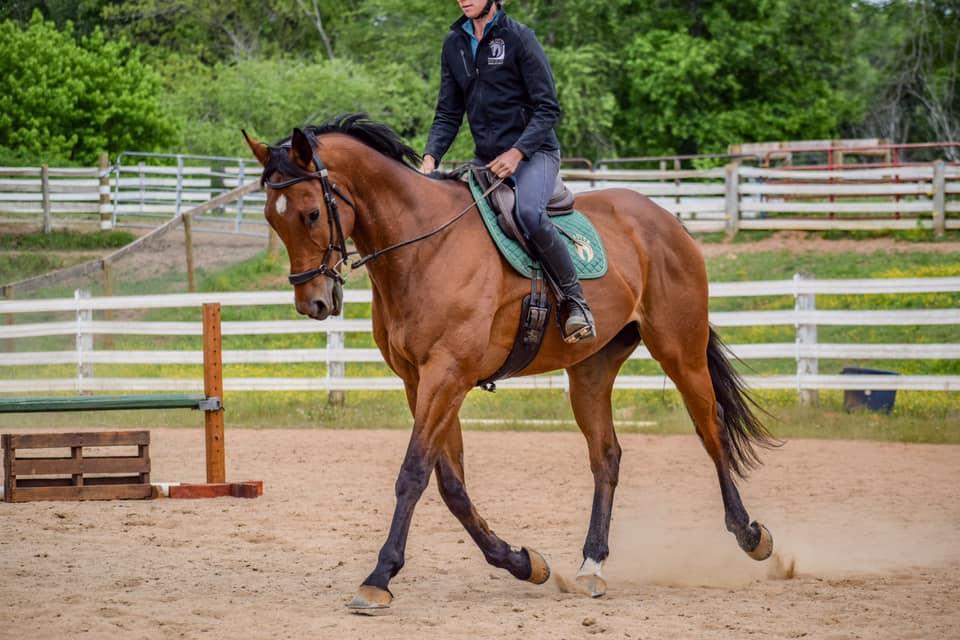 Boomer schools at home on the flat. Photo by Alanah Giltmier.

Working with all these horses over the years, I have learned that sometimes you must trust your brain. Other times, you need to trust your gut. I just wish that in this case, all that trust and thinking were wrong.

For the past couple months, every time I would turn out Boomer, I would watch as he galloped up and down the hills, trotted the flats and meandered happily. Maybe it was his visually-distracting white sock, maybe it was that ankle, general arthritis, or maybe, hopefully, I was completely wrong. There was no discernible lameness, no limping or visible short-step, but something still wasn’t adding up. 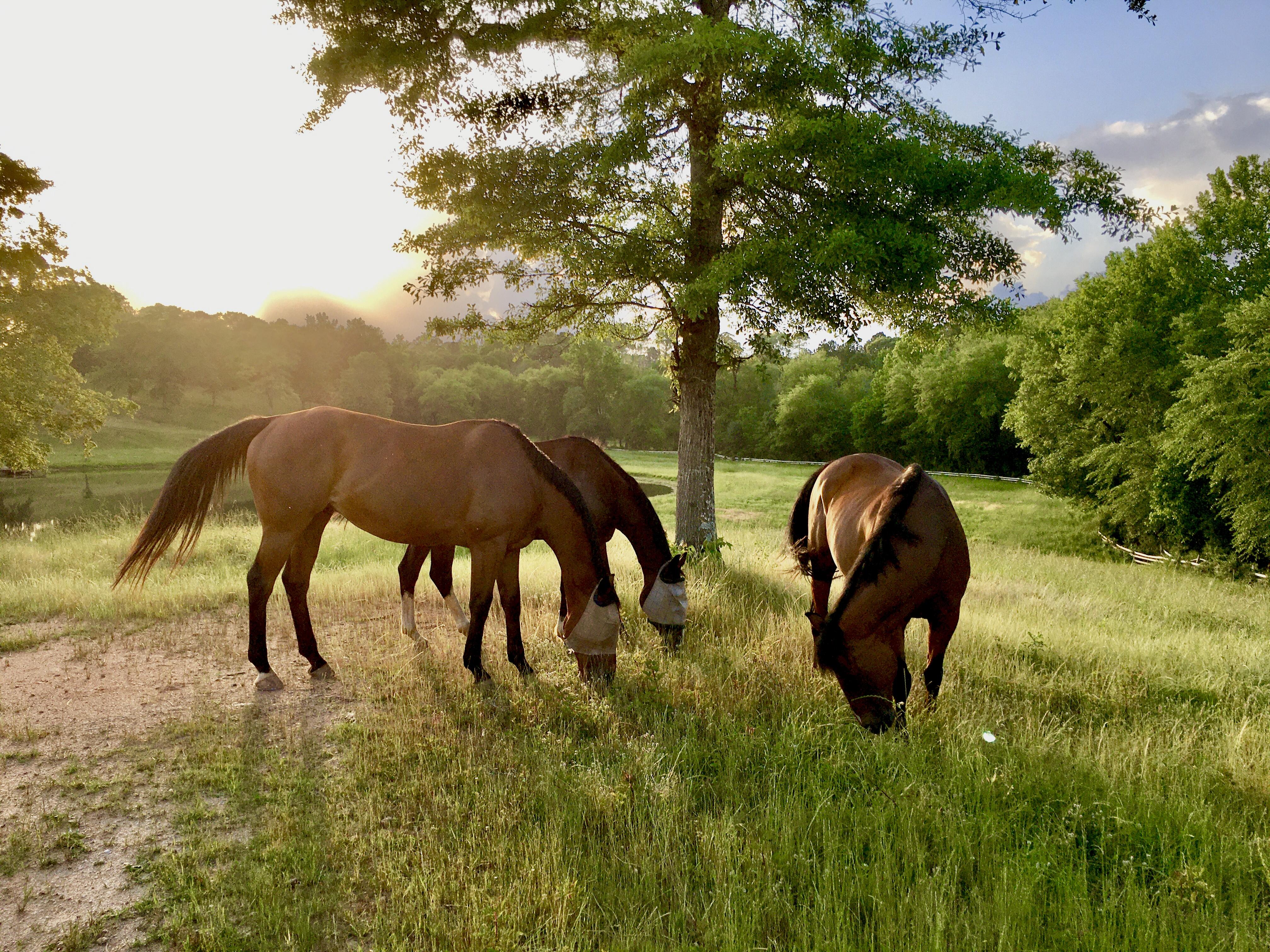 As I moved him into four to five days a week of work, his ground-pole training started to get better. He could trot and canter single poles, and eventually, he would travel quietly through grids. Things seemed to be improving, but I still wasn’t comfortable seriously jump training him. Over the few fences we would do, he would rush and “sag” through his back. He’s so big that at 17.1, he seemed to be using momentum and quick lifting of his limbs to clear the poles; he wasn’t pushing off. I tried to ignore the nagging, sinking feeling in my stomach and decided that I could train towards a dressage RRP entry instead of eventing or jumpers. 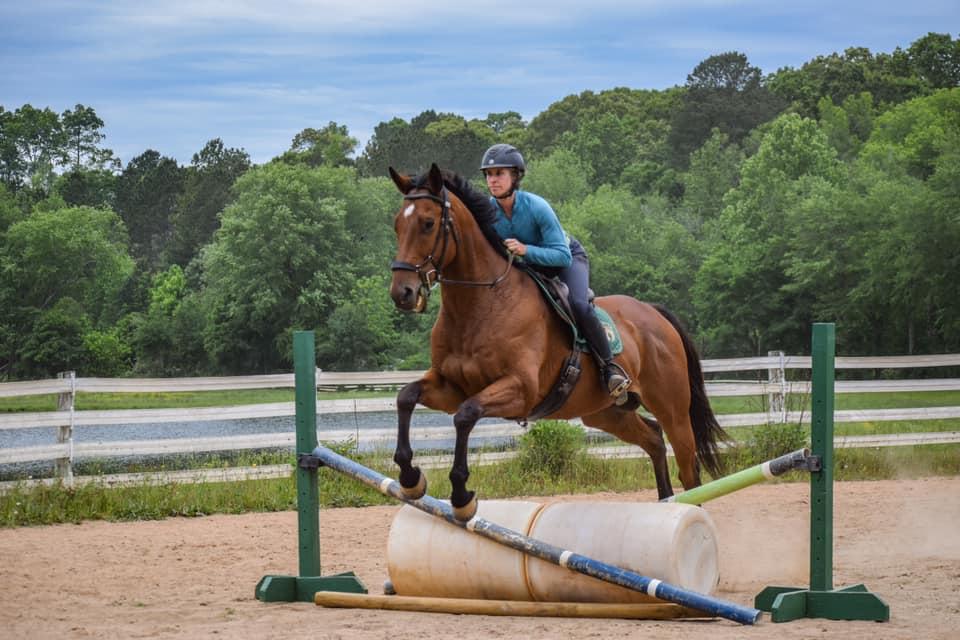 Boomer gets his legs out of the way of the barrels, but there’s little to no push through his hind end. Photo by Alanah Giltmier.

Then, even getting his hind end under him on the flat became more difficult. During the most recent ride, he was beautiful and relaxed puttering around at the trot until I put leg on and sat up to bring him from his hind-end up into my hands. Within minutes he was lathered. When I would stop after a circle or pole, he would look at me with this quiet sympathetic eye that made it clear, “I’m trying, I just can’t.” Some horses will choose not to. That’s not this horse. He’s all effort and kindness. If I asked him, he’d try to jump the giant xc fence, the arena rail, the moon… but that doesn’t mean he could or should. 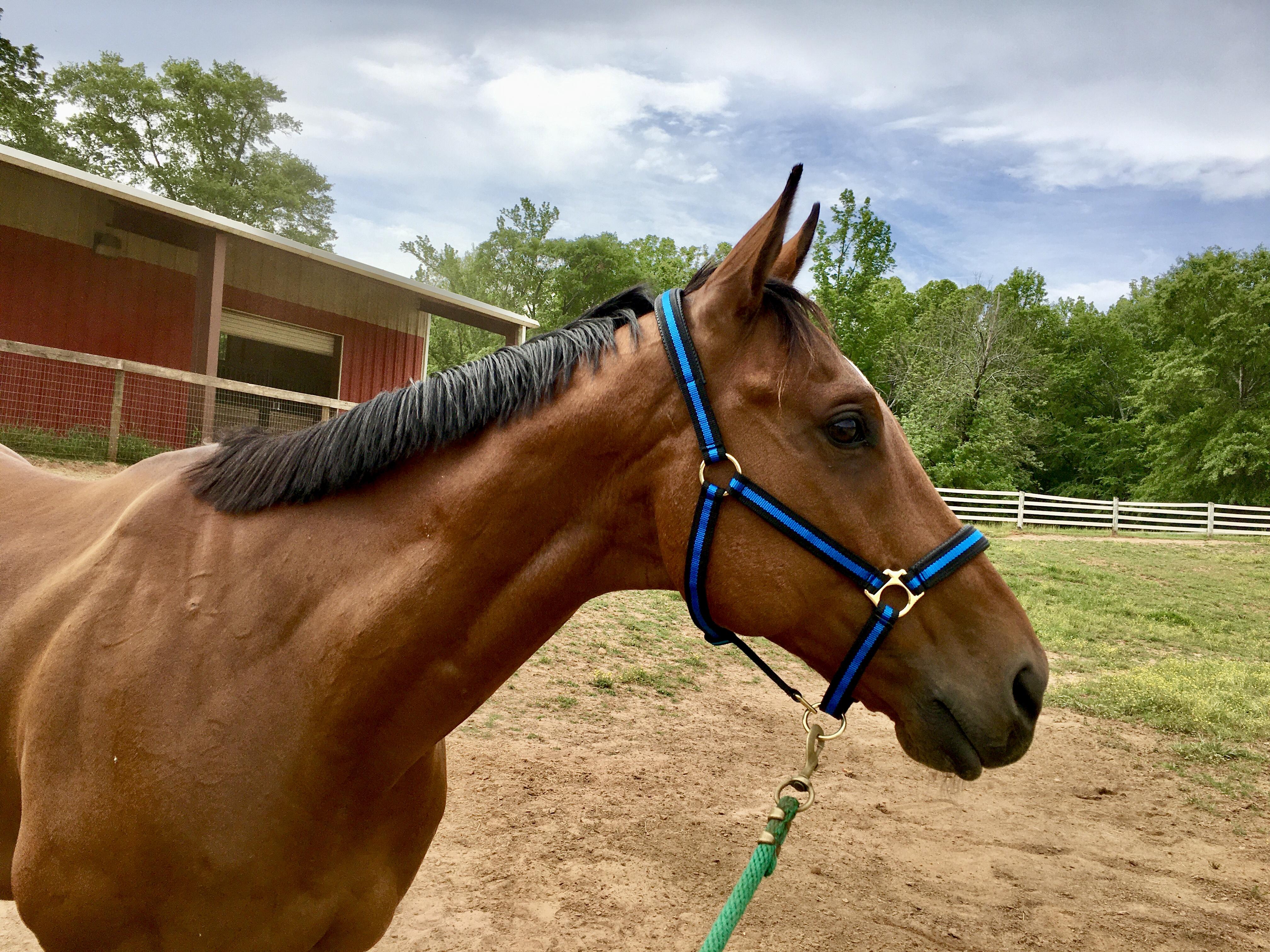 Knowing that I was not going to like what I was going to hear, I called my vet anyway and set up a lameness exam. I was hoping for a diagnosis of something like arthritis or any issue with an easy fix. This past Monday we blocked and identified Boomer’s hind right ankle as the problem. A radiograph showed an enlarged sesamoid bone with signs of increased blood flow to the region. Due to blocking, we had to wait to ultrasound to see if there is any ligament damage causing the bone to take on the extra strain. We’ll be scanning his ankle the day this blog “goes to press.” I’ll be here holding my breath.

It’s cliché, but indeed every horse has something to teach. For this past year it seems that the lesson I’m getting in spades is that despite my hopes and competition goals, slow and steady and right take priority. As I try to build upper-level horses from the ground up, these Thoroughbreds keep reminding me that to do so I need more than the eye, bravery and skill, but also the patience, resolve and heart to do it right.

Six months ago, I was in a very similar place with Juice (JC Pulpituity), my then-four-year old 2019 RRP Makeover entry. I purchased Juice knowing that he had an enlarged hind left ankle. The pre-purchase exam vet called it “turgid” and when we x-rayed, the vet noted some expected imperfections, but nothing that would hold up his career. We didn’t ultrasound. As I was readying this leggy super-star to move up to training level, he came in from the field with an extra egg-sized swelling on that ankle. 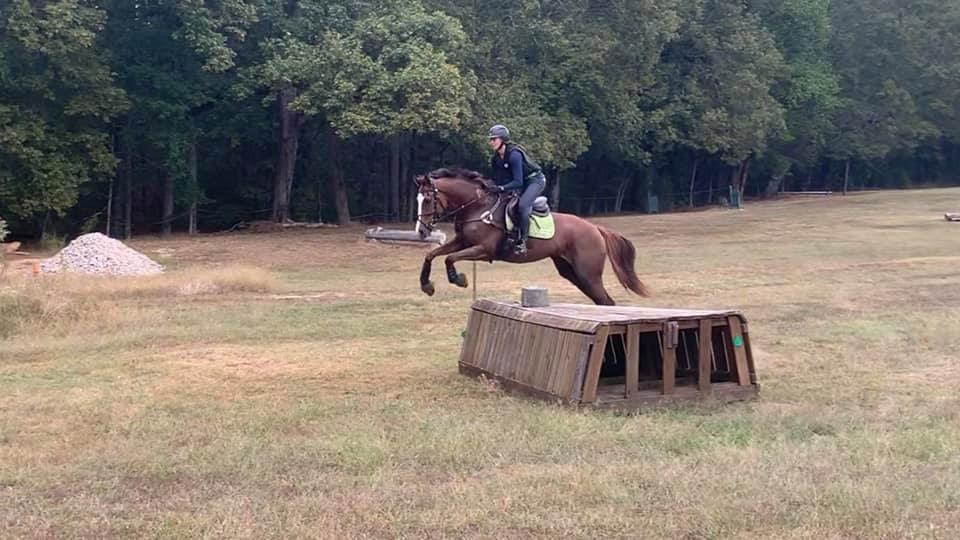 Juice (JC Pulpituity) jumps the corner in the Training Level group at the Lucinda Green Clinic at Ashland Farms in October 2019. Photo by Holly Breaux.

After giving him time off, when I brought him back, his jump had changed – he wasn’t pushing as hard. It wasn’t terribly obvious, but just like Boomer now, Juice wasn’t ‘right.’ I put my hopes on hold, scratched his first training level horse trial, and called the vet. He had re-injured what we now know was a poorly-healed suspensory lesion, likely won during his first and only race. This disappointing news earned him six months of stall rest and fancy shock wave and stem cell treatment. I haven’t seen a doctor in years, but in my barn, we’re the pinnacle of cutting-edge medical advances and slow and steady rehabilitation. 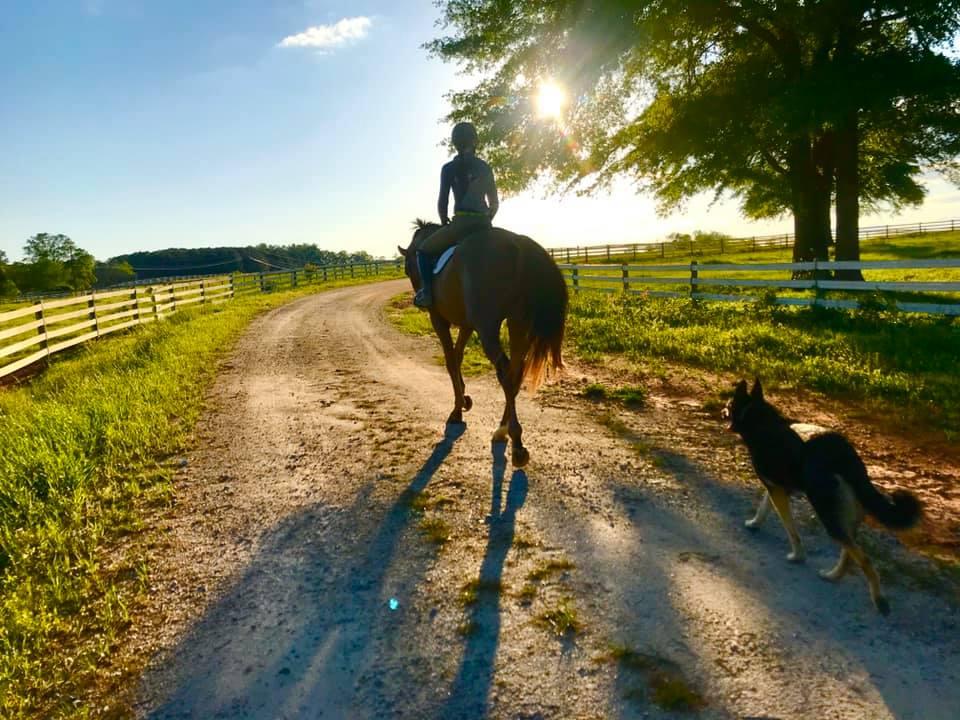 After six months in a stall with limited hand grazing, Juice goes out for his first tack walk, tailed by Walker the dog. Photo by Greg Lyon.

As Juice shows signs of improvement, he follows on the heels of another rehab — Forrest (JC Don’t Noc It) who competed in the RRP Makeover in 2018. This personality-laden redheaded twit (don’t worry, I love him both because of and despite his ridiculousness) ran a set of fevers that nearly cost him his life last summer. For three weeks, I slept in the barn, monitored his temp and drugs, and changed fluid bags while he fought through what eventually turned into a staph infection in his lungs. 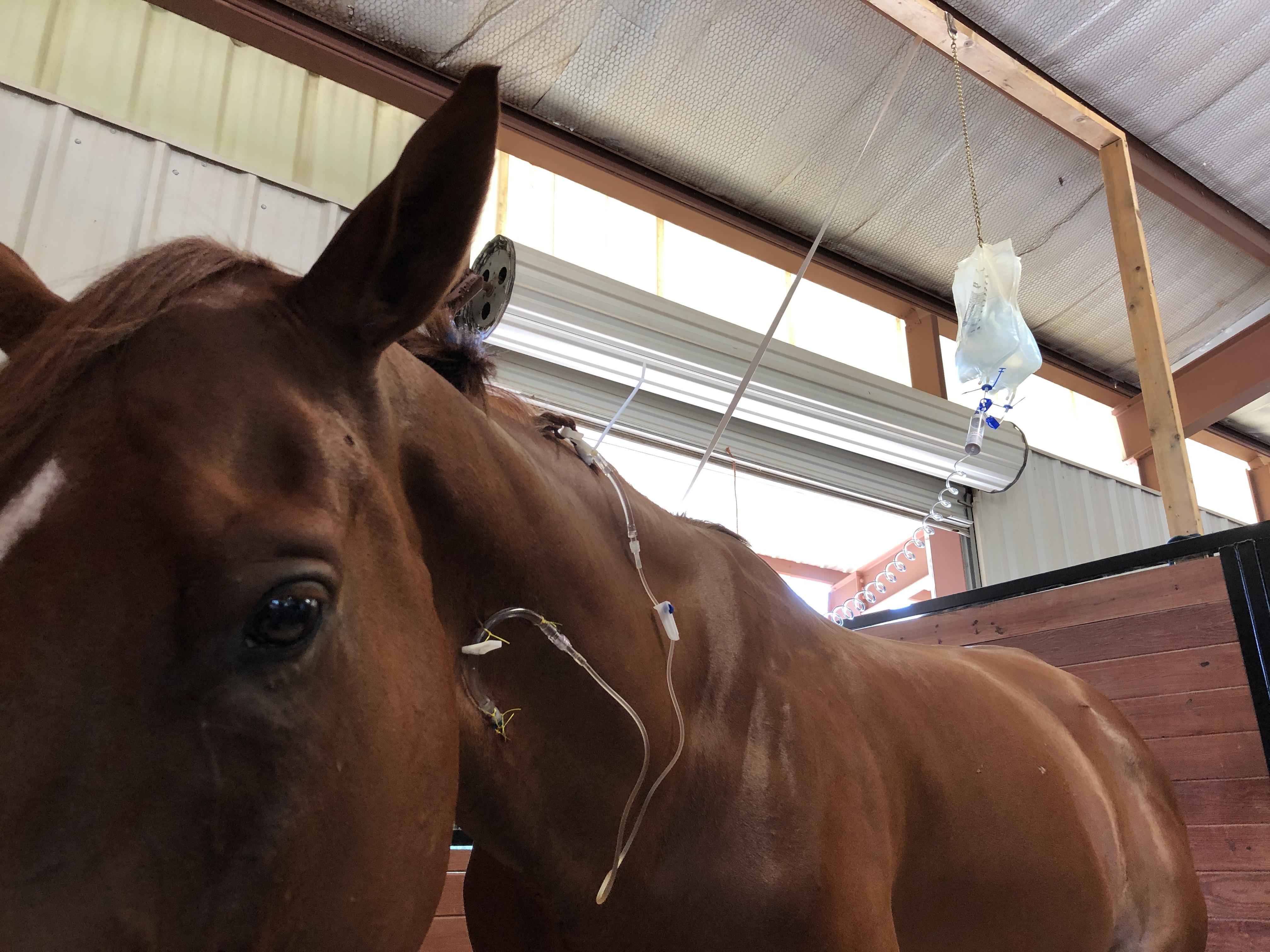 Forrest (JC Don’t Noc It) fights through a hellish set of fevers in the summer of 2019. Photo by Aubrey Graham.

I spent a lot of that time alternating between rubbing his ears and cursing while telling him that he was not allowed to die. By the grace of something, someone, some crazy resolve, he pulled through. It has taken nearly a year, but he’s now back schooling training and prelim questions and gearing up for a re-entry into the show scene as the quarantines lift around the country. 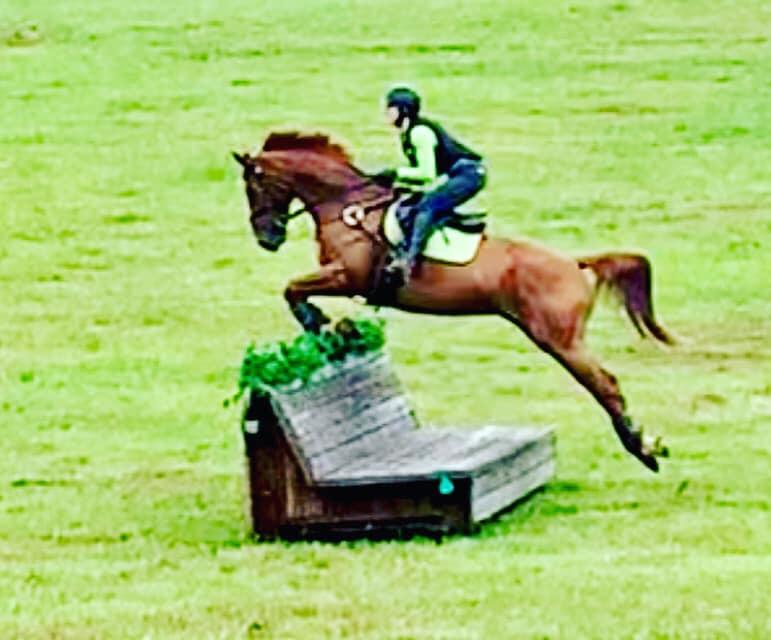 Forrest shows off his recovery by hopping easily over a preliminary fence while schooling at Ashland Farms in May 2020. Photo by Alanah Giltmier.

So, with Forrest back to galloping fences, Juice tack-walking and finally enjoying limited turnout, Boomer’s near future hangs on the results of his ultrasounds. It’s pretty clear that he will need to rest. I don’t know for how long, or what his longer-term future will hold. All I know is that he, like Juice and Forrest, has earned all the time and treatment he needs. If he can’t make this year’s RRP – which is unfortunately looking like a likely scenario — that’s okay. If he can do a low-impact set of classes, we’ll steer for dressage and maybe competitive trail. Nothing wrong with branching out into new fields and learning a thing or two along the way.

Either way, I’m handling this disappointing news the same way I usually do: feel the disappointment for a little while and then cobble together a forward-looking plan. I have two entries for this year’s RRP. Even before this news, I had not settled on who the second horse might be. There are plans in the works, but I’ll wait for those to be actualized before sharing the specifics. That said, with any luck, while Boomer rehabs, I’ll have a chance to start another and ready them for the Makeover, without rushing, in the span of four months. I wouldn’t train these Thoroughbreds if I didn’t like the challenge. So, universe, I see your requirement for patience and resolve, and also, challenge accepted — onward we go.