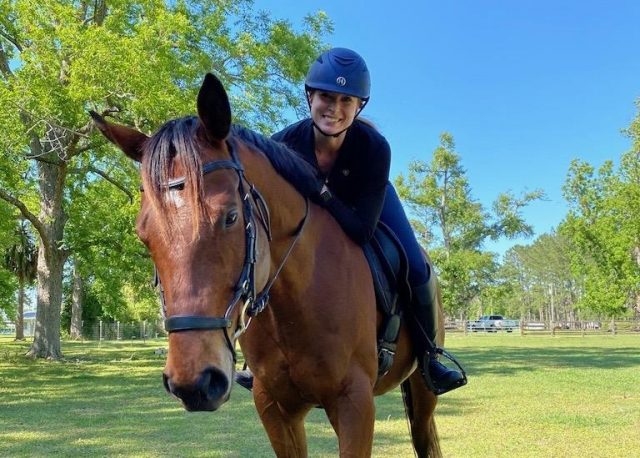 May 21, 2020DeAnn SloanContributor#RETIRED RACEHORSE PROJECTComments Off on The Power of Good Friends: Libby & Spider

“He was quiet enough that I also rode him the very first day. I’m not too embarrassed to admit that I cried. To actually get on and have him walk off quietly … after so much time and worry about him, well, my heart was full to bursting.”

For 616 accepted trainers, the journey to the Retired Racehorse Project‘s 2020 Thoroughbred Makeover and National Symposium, presented by Thoroughbred Charities of America, has begun! Over the next eight months, four of those trainers will blog their journeys, including their triumphs and their heartbreaks, successes and failures, for Horse Nation readers. Today, blogger Libby Henderson talks about how important good friends can be on the Makeover Journey — and getting to ride Spider finally!

I am an introvert. I do like people, and I can talk to anyone – I was called “Motor Mouth” as a child for a reason, after all — but I am usually happiest spending lots of time alone. This has been true even in the barn. I do chores while listening to audio books or podcasts and talk to myself, the horses and the dogs. I can be odd and awkward, and it is easier to be odd and awkward with no witnesses except the horses and the barn cats.

I do find myself wishing for someone to ride with sometimes though, and when it was time to start Spider under saddle, I was stuck. My farm is lovely, but not close to the rest of the local equine community, and I couldn’t imagine that anyone would be willing to come all the way out here to ride him or to babysit me doing it myself. The rules for the Makeover require the trainer (me) to be the primary rider, but that isn’t until after July 1, 2020.  However, I have wanted to avoid sending Spider off to anyone for training. I want to do, or to be involved in, as much of the work as possible. 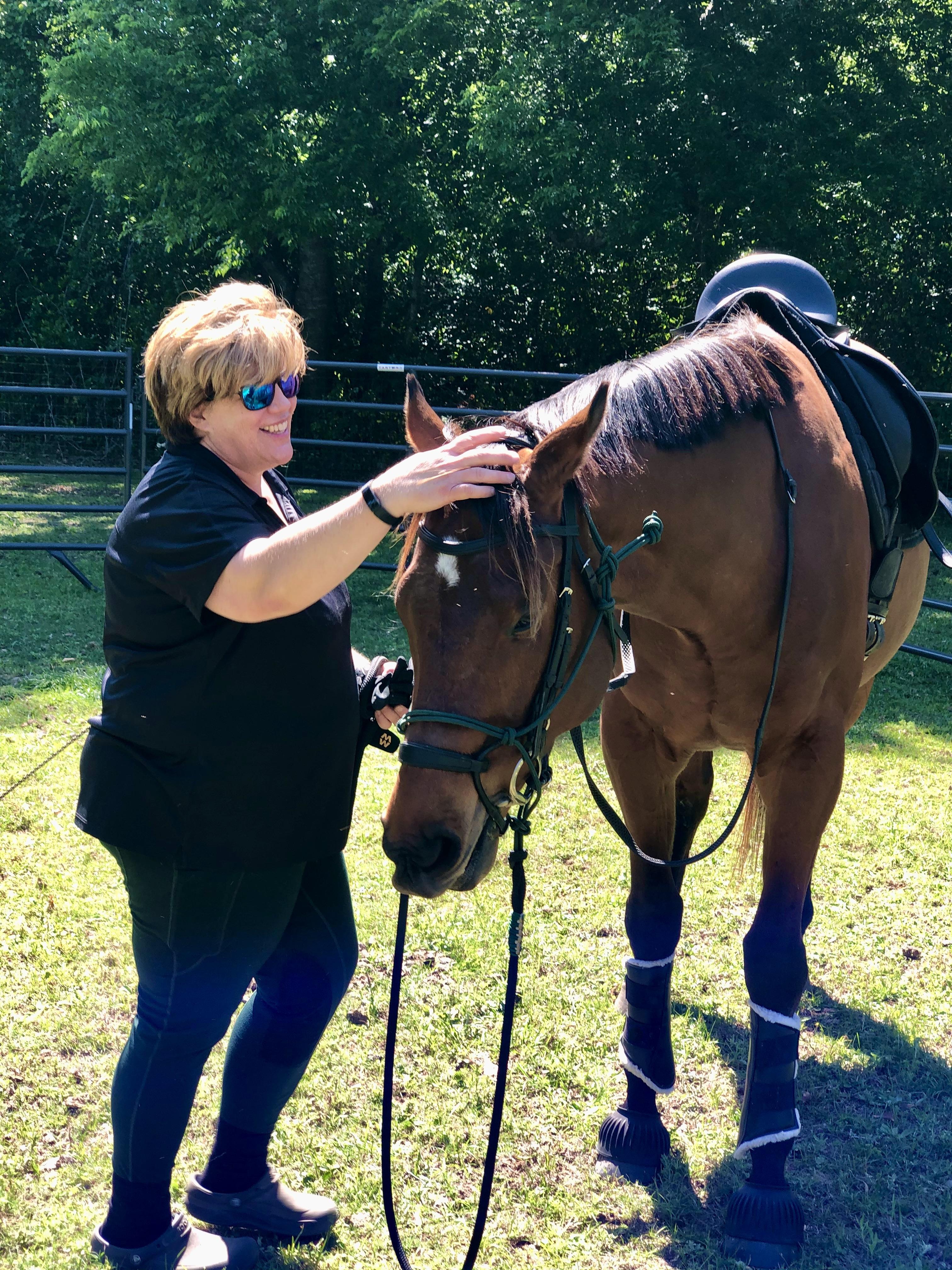 Right around the time my last blog post was published, a friend messaged me and offered to help me to get him started. I was stunned by the generosity of her offer and quickly accepted before she could change her mind! Kristina (I haven’t even changed her name to protect her reputation) is one of my favorite people. We met at a CrossFit competition in the Fall of 2017. I volunteered at my home gym’s competition, working the registration desk (anyone ever volunteer in non-horsey places, hoping to convince people to volunteer in return at your horse trials? No? Just me?). When I mentioned that I’d found zip ties from my horse trials stash in my car that the gym could use, Kristina overheard and asked if I was a horse person. And we’ve been friends ever since! That day I harassed her husband mercilessly about how much she needed her own horse. Fast forward three years and she’s got a big truck, a beautiful bay gelding that she’s evented through Novice, and is horse trailer shopping! She and her husband are also integral volunteers now for Red Hills Horse Trials (yes!!) – absolutely my kind of people. 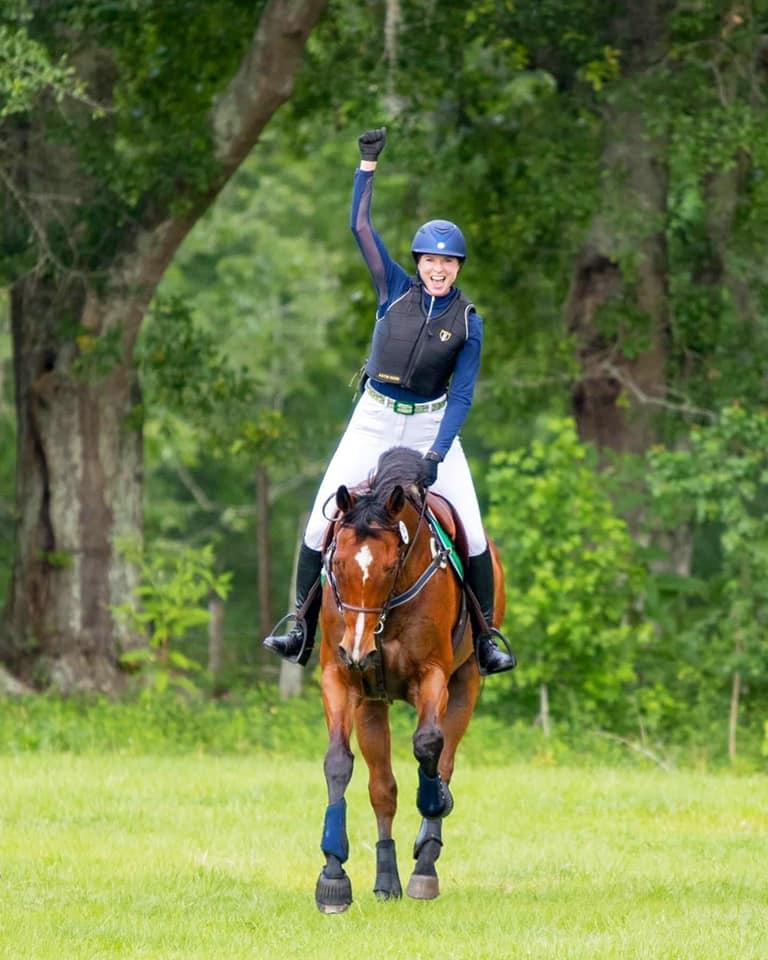 She’s also got a big enough heart to volunteer to help my big baby OTTB learn how to go back to work. Now, if you’ve wondered why his first ride has been such a big deal to me when all TBs retire from a job that require them to be ridden regularly, I’ve got several reasons. (And not just because I am a professional worrier – Enneagram Counter Phobic Six over here, folks!) First, he’s had a year off to heal his badly bowed tendon. Second, though he has recorded works between June 2018 and December 2018, the rest of his life and training – from September 2016, when he was sold as a yearling at Keeneland’s Fall Yearling Sale, until June 2018, when he recorded his first official work in Ocala, is a mystery.

We don’t know where he was or what he was doing. I’ve tried to reach out and research that time, but so far I’ve come up empty. (Still not giving up, though! Stay tuned for more on that later!) He may have stood around in a field, been hacked around the farm, or been injured. We just don’t know. Third, riding any new horse is always fraught with stress for me. Will they be nice to ride? Will they have bad habits? Will they be spooky? Will they be placid and calm? So, yeah. Anxieties.

Enter my friend, Kristina. She’s an amateur, and wants to stay one, so she won’t accept any compensation for driving this far out to ride a goofy horse that has had a full year off. And she keeps thanking ME for letting her help me with him. I’m not sure where or how I won the lottery, but I’m so grateful. She has a good seat, light hands, and a ton of patience.

So far, he’s been actually pretty good. At home, in my riding paddock, he’s been more whoa than go. The very first day we learned he didn’t like it when the lunge whip is popped behind him. I mean, he really doesn’t like that. 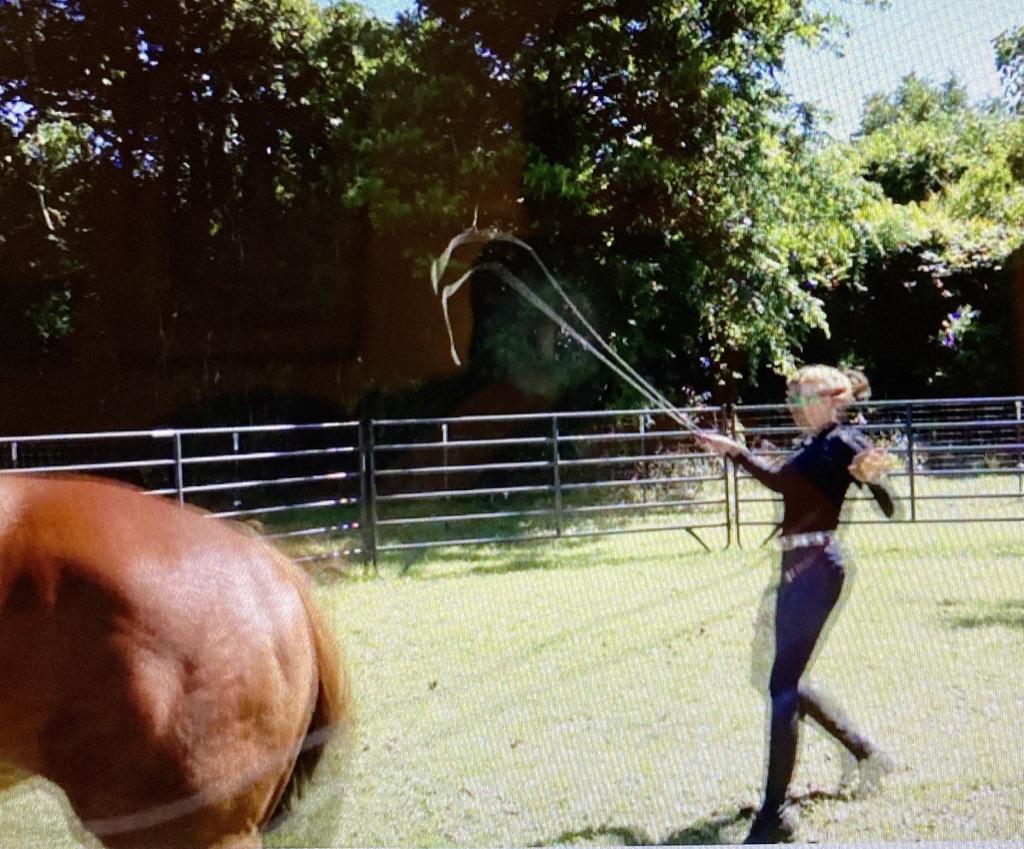 And we’ve learned that he doesn’t, frankly, have enough energy to waste any of it on the lunge line before riding, especially as the days have gotten brighter and hotter. The very first day, it was fascinating to see his puzzlement turn to understanding as she asked him to walk off with her leg in his dressage saddle. He was quiet enough that I also rode him the very first day. I’m not too embarrassed to admit that I cried. To actually get on and have him walk off quietly, to trot a little, and have him stand for me to mount and dismount, after so much time and worry about him, well, my heart was full to bursting. 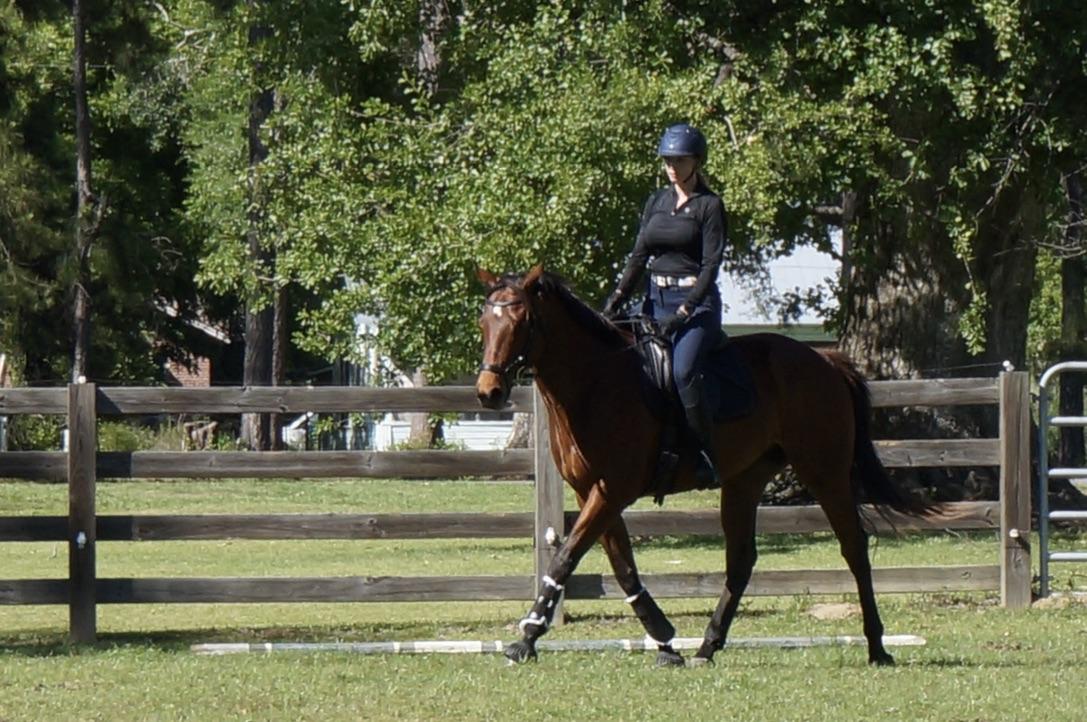 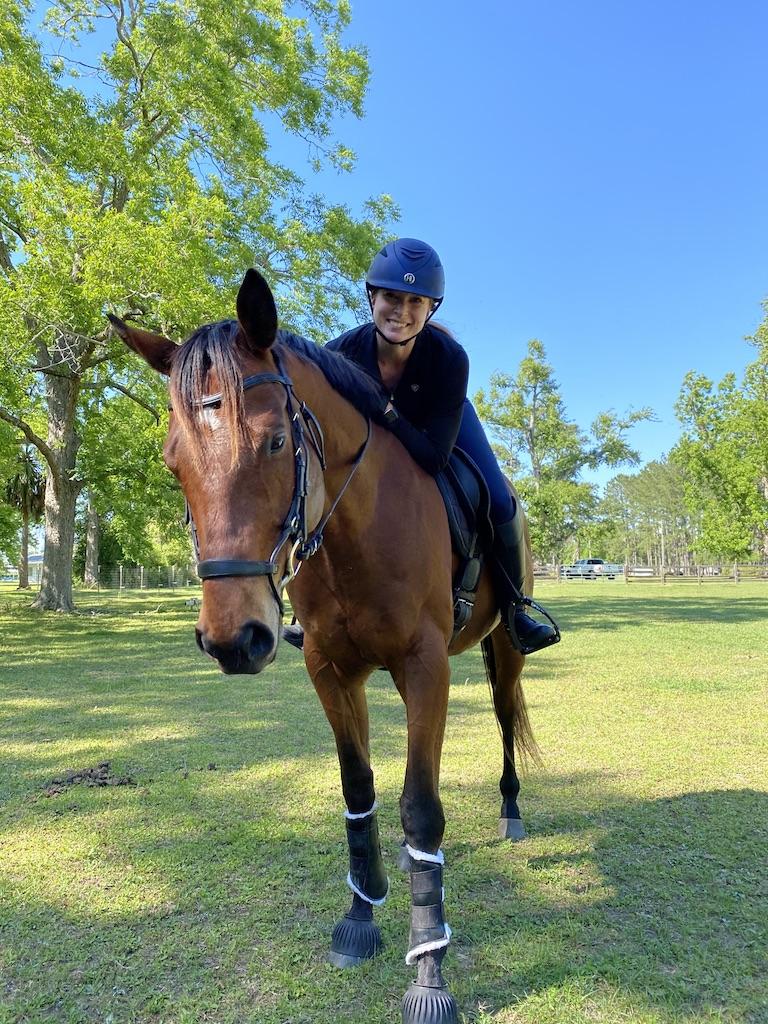 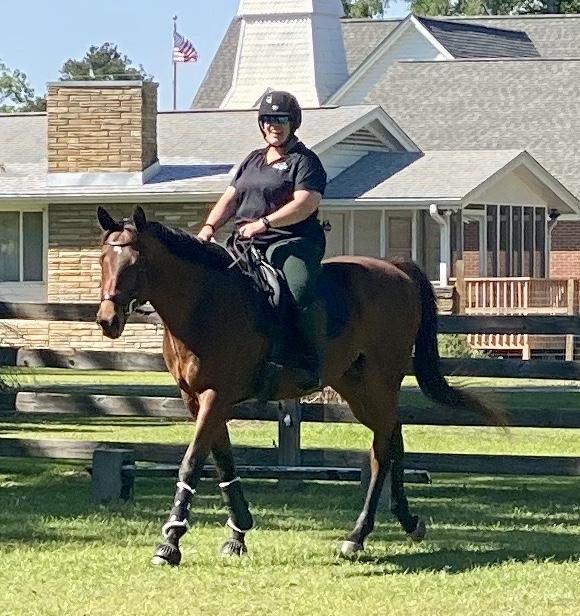 Me on Spider. Photo by Kristina Littlejohn. 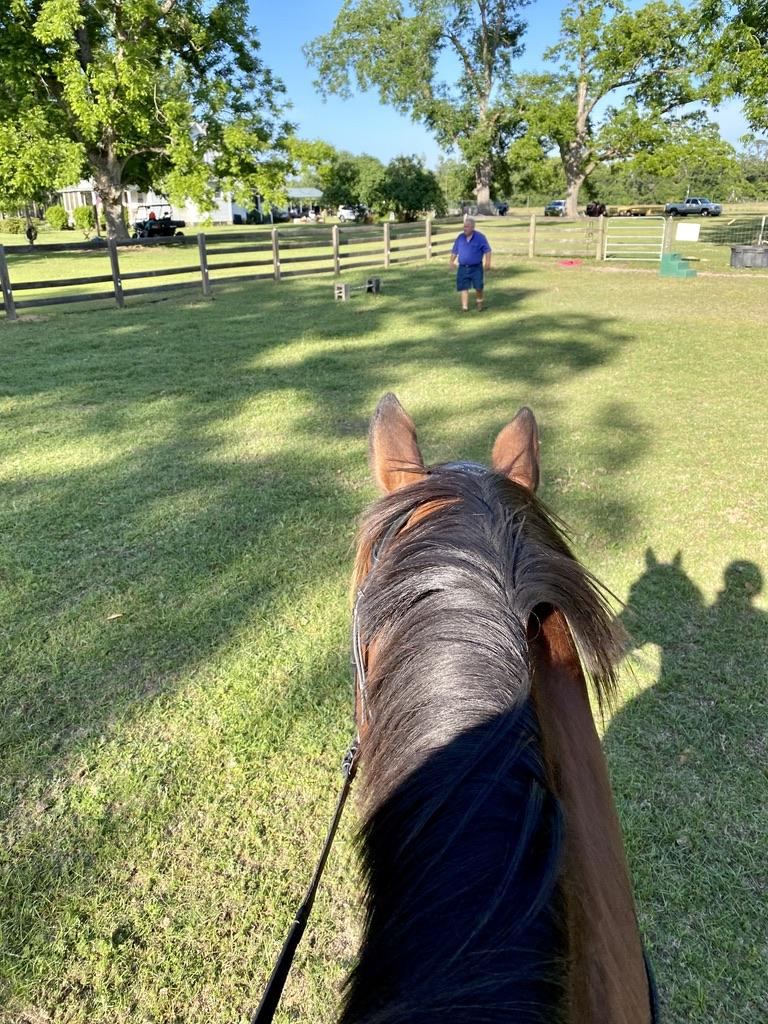 Me looking through his ears on a solo ride. Photo by Libby Henderson.

Ride number nine was this past weekend, when he went on his first field trip. He stood tied at the trailer, and was tacked up and ridden in a real dressage ring away from home. We have learned that he trips over his own feet when he isn’t paying attention, that he prefers to make sure he taps each and every ground pole he walks over, that he can be a little gate sour, and that when he spooks, he does a small spin in place, but running off is, at this point, too much trouble. He’s gone on two hacks out on our property at home, and while he was a little more “up,” he wasn’t bad. In fact, his most anxious behavior came when my husband passed us in the UTV that we use to feed, and the dinner wagon headed toward the barn, at dinner time, without him. The boy is serious about his groceries. I’ve had another friend/longtime trainer come out and give an impromptu lesson to us on his second ride, and my non-horsey BFF entertained him, and read him a story while I was ineptly attempting to dye his sunburned tail. 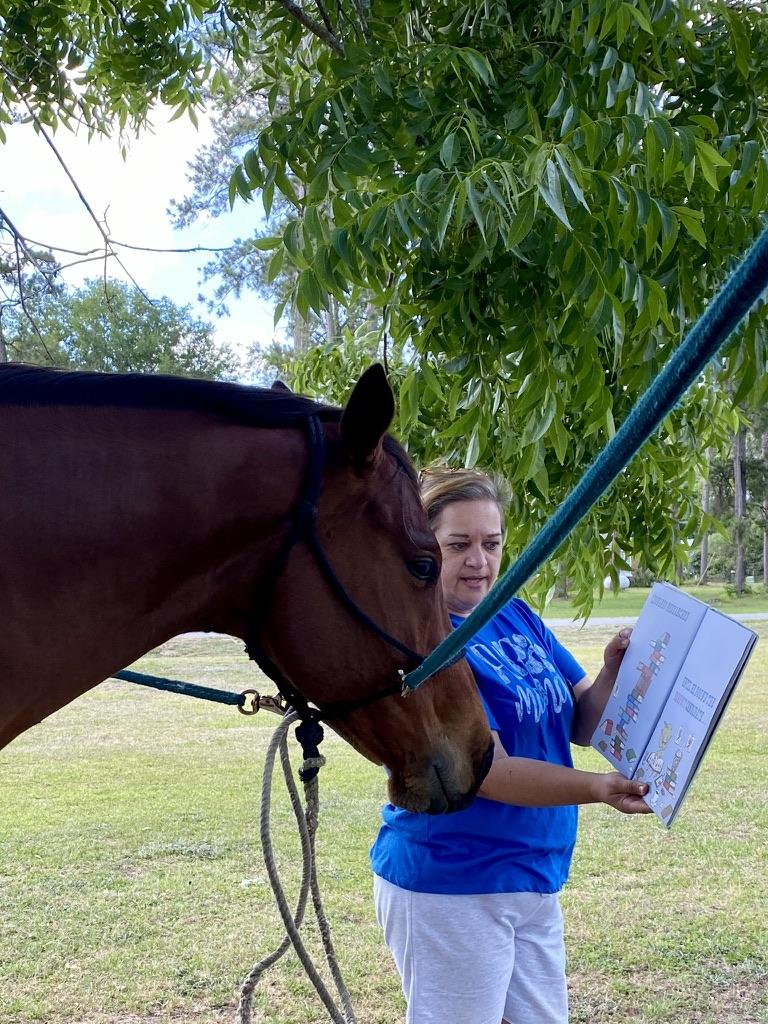 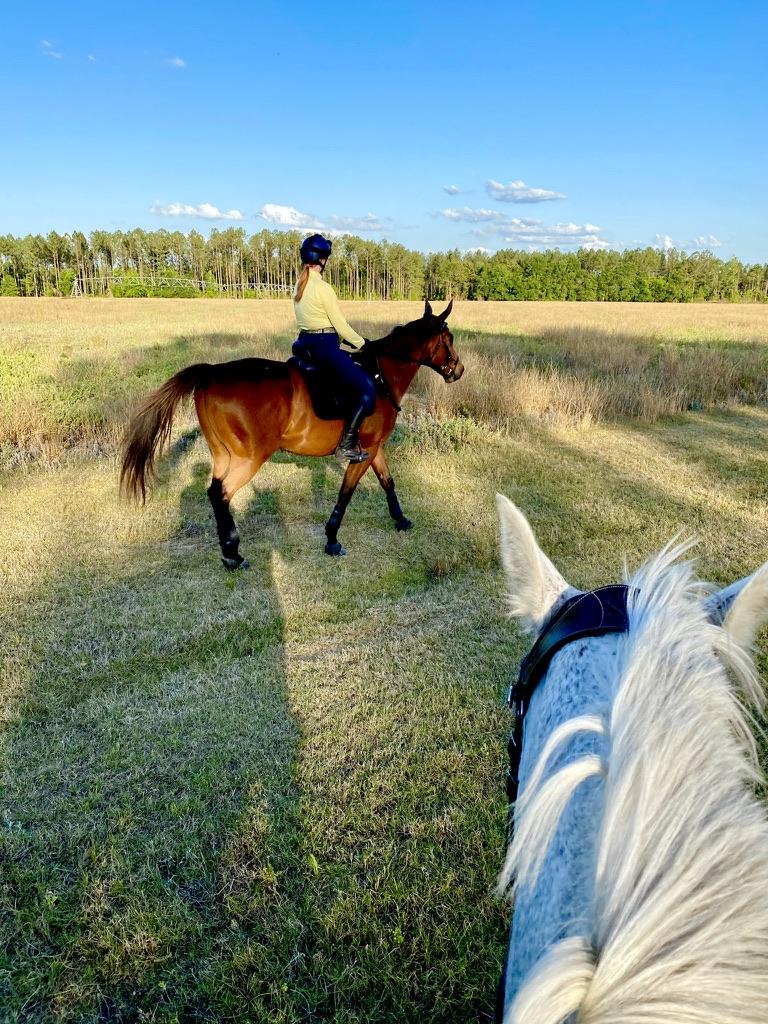 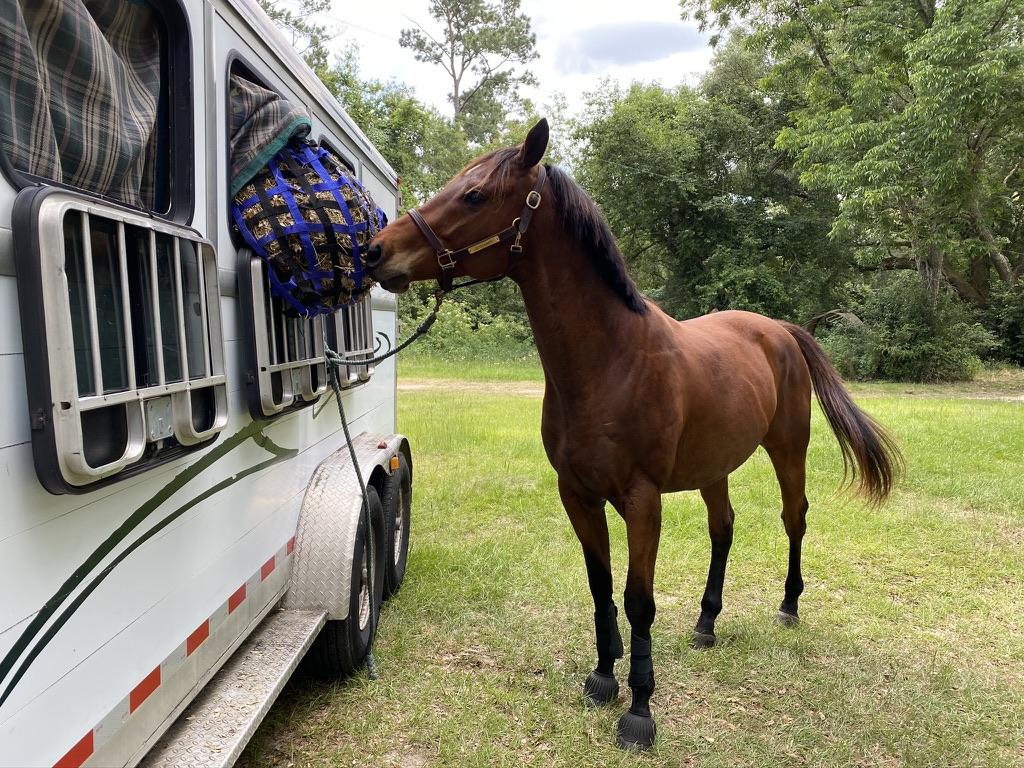 Spider on his first field trip. Photo by Libby Henderson. 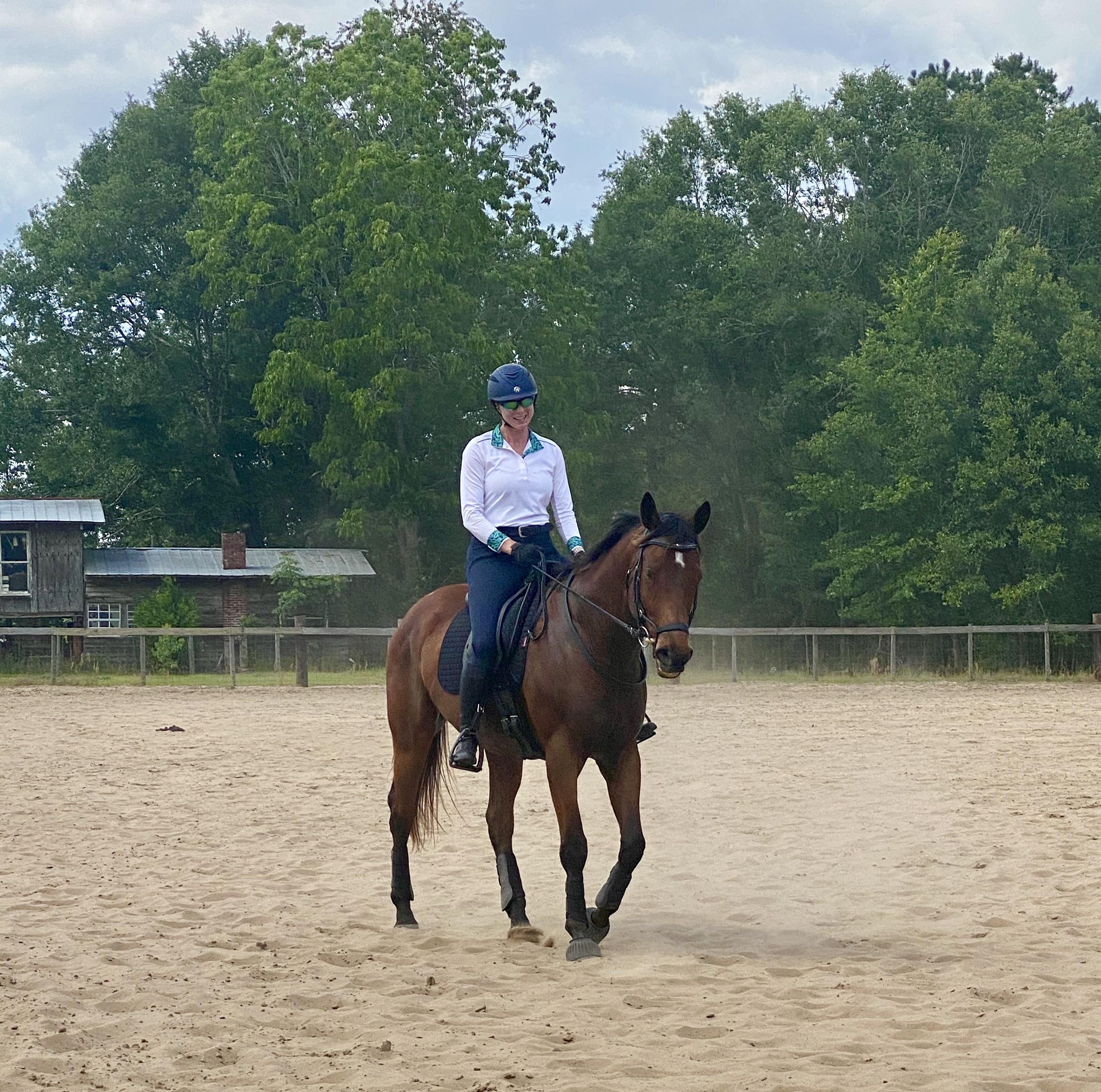 Spider on his first field trip. Photo by Libby Henderson.

We still don’t know for sure whether the Makeover will be able to go on as scheduled, and with horses, you never know for sure that you’ll get there even if it is. Woody Allen reportedly said, “If you want to make God laugh, tell him about your plans,” and I firmly believe that nowhere does this apply more than it does in horses. So, we go forward with the intention of reaching the Horse Park in October and dream of riding into the Rolex Arena to do my dressage test. The real value here, though, is in the journey and your companions on that journey. And I couldn’t have taken even the first steps without the love and generosity of good friends. 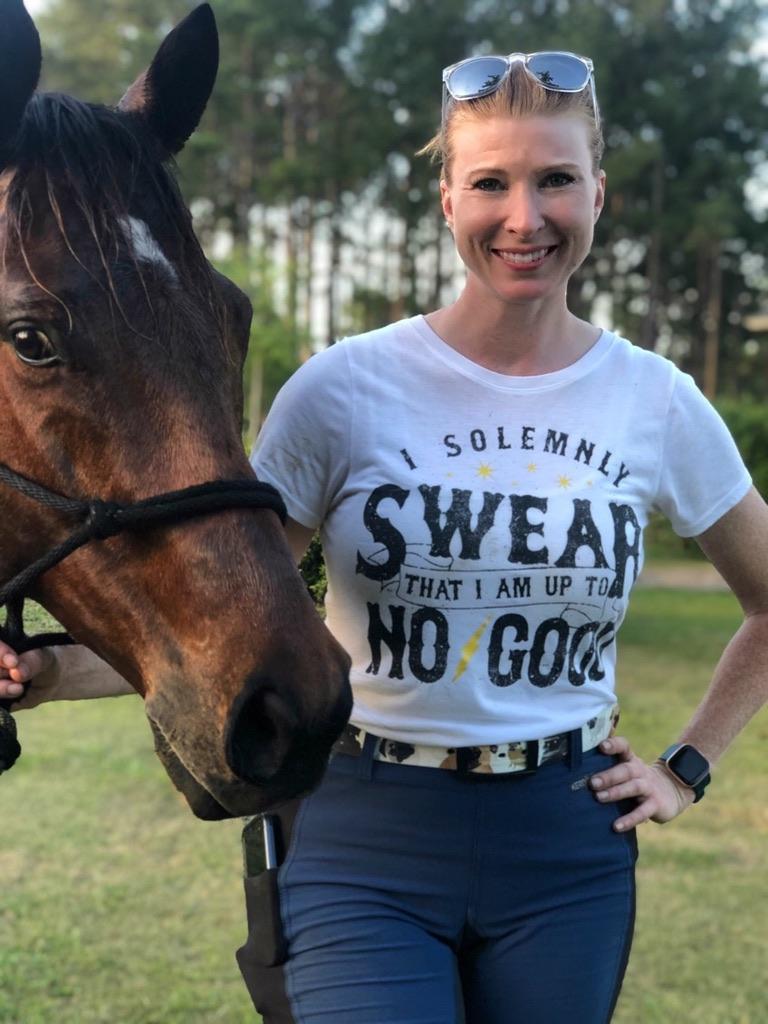 Kristina and Spider after a good ride. Photo by Libby Henderson.