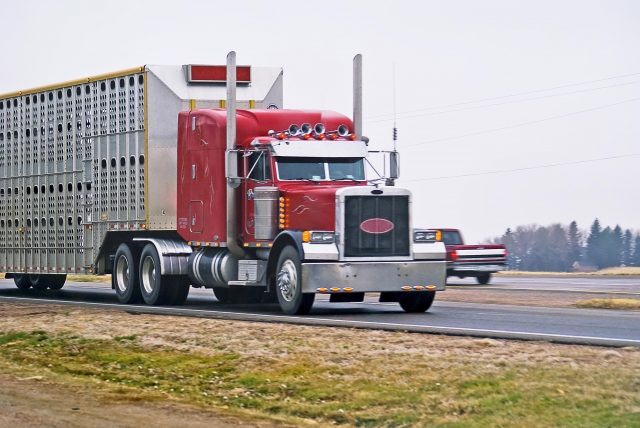 The Horse Transportation Safety Act (H.R. 1400), first introduced in 2008, may have the opportunity to get off the ground this year. If this bill passes, it would be one more step toward ensuring the safety of America’s horses during transport.

The image of injured and dying horses strewn along a highway is difficult to shake. In 2007, a double-deck trailer carrying 59 Belgian draft horses, each weighing thousands of pounds, overturned after colliding with a pickup truck in Wadsworth, Ill. The accident was so severe that it took more than five hours for authorities to extricate the suffering horses from the mangled trailer, which was designed to transport cattle and hogs. Sadly, 19 horses died from the crash. The incident sparked immediate outrage, leading to the introduction in 2008 of a federal bill, the Horse Transportation Safety Act. The bill seeks to promote public safety and animal welfare by prohibiting the transportation of horses across state lines in a motor vehicle containing two or more levels stacked on top of one another.

The important measure has long enjoyed broad, bipartisan support. But, like many animal protection bills, the Horse Transportation Safety Act has stalled in committee due to lawmakers’ competing priorities. In 2010, after passing unanimously out of the House of Representatives’ Transportation and Infrastructure Committee, the bill was never brought for a vote before the full House.

Currently, the Horse Transportation Safety Act (H.R. 1400) is being led by Representatives Steve Cohen (D-Tenn.), Peter King (R-N.Y.), Dina Titus (D-Nev.), and Brian Fitzpatrick (R-Pa.). With 132 lawmakers cosponsoring the bill this session, and the endorsements of all the major animal protection groups, including the Animal Welfare Institute and the Humane Society of the United States, as well as the American Veterinary Medical Association (AVMA), it may finally reach the finish line. The Transportation and Infrastructure Committee is currently drafting a massive transportation package in advance of a September 30 deadline to reauthorize federal transportation legislation. This presents an ideal opportunity to include a provision that would bar transporting horses in vehicles that endanger both animals and motorists.

The potential for catastrophic accidents is not the only issue at play. Even absent such wrecks, the use of these trailers is inhumane and can lead to debilitating injuries. Double-deck trailers are meant to haul animals such as cattle and hogs who are much shorter and stouter than horses. The ceiling clearance in these compartments is woefully inadequate to allow the horses to stand comfortably with their heads up once crammed inside. The AVMA recommends at least a seven- or eight-foot clearance for horses, which these multi-level trailers cannot provide. Most double-deck trailers max out at a ceiling height of just under 5 ½ feet.

The U.S. Department of Agriculture itself concluded that these vehicles “do not provide adequate headroom for equines,” and that horses are far more likely to be injured in double-deck trailers than in single-deck trailers that can better accommodate tall animals. Indeed, the USDA specifically banned the use of double-deck trailers for transporting horses to slaughter, citing concerns that such vehicles could prove “extremely top-heavy and prone to tipping.” Although no horse slaughter plants currently operate in the United States, tens of thousands of American horses are shipped across the border each year to Canada and Mexico to meet a grisly end in foreign slaughterhouses that kill horses for human consumption. It is ridiculous that a practice deemed too inhumane for horses sent to slaughter remains legal for other horses being moved around the country.

When the USDA issued its regulations, the department was unequivocal in its findings that double-deck trailers are inappropriate and unsafe for transporting adult equines, but noted that only slaughter-bound horses fell under its statutory authority. Enacting broader limitations would require a new legislative remedy.

Lawmakers now have the chance to extend protections to all horses hauled across state lines as they work on finalizing the next transportation package. Public opinion polls show that Americans overwhelmingly want to see horses protected from harm. These animals should not be forced to endure long journeys in cramped conditions that can lead to serious injuries and brutal deaths.