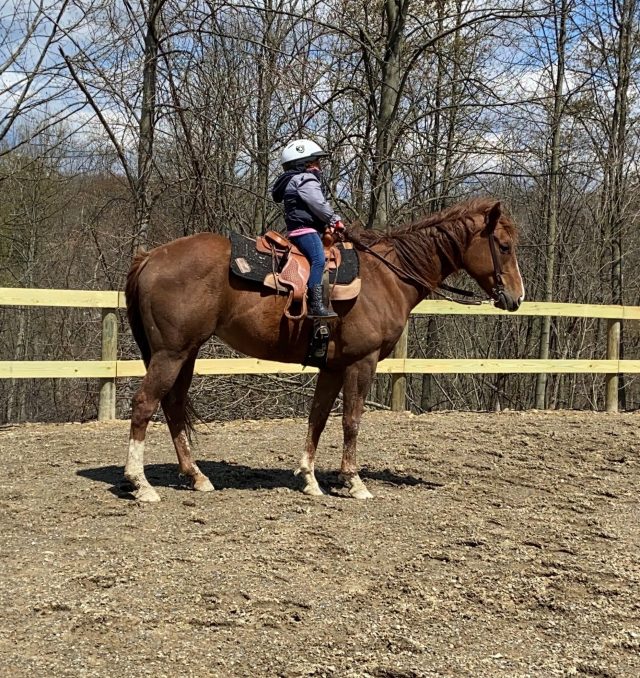 “While he’s been getting most of his workouts from me, I called in some back up…The two helpers I have called upon for exercise help have been riding Buns since he was a three year old…Each of them is getting something out of the experience that they need.”

On his journey to recovery I, along with In Stable Hands, have faced many challenges and educational topics that I have been sharing. We’ve faced and discussed proud flesh, his fracture, the tendon damage and maintaining a healthy weight. I’ve discussed a particular day where Buns decided it was a good idea to jump the round pen and pull down his stall front in a 24-hour period and kept readers up to date on vet check ups.

In my last few articles,  I told you the reasons why I have gone through such extensive care with Buns, rather than thinking about the option of putting him down. I’ve discussed the frustrations of having an injured horse and I recognized horses I’ve had the opportunity of riding while Buns has been healing. I’ve also turned to you guys and gals for your opinions and testimonies on the best sport boots on the market.

My last article was the most exciting, I thought, because Buns was finally back to light riding! I’m going to continue on about how he’s been getting his workouts. Buns gets ridden a few times a week for short periods of time. No tight turns, mostly walking and trotting, unless he’s a bit wired on a particular day and decides he wants to fight that plan.

While he’s been getting most of his workouts from me, I called in some back up. It’s always a bonus to get all three of my horses worked in a day so I decided to call in the troops. The two helpers I have called upon for exercise help have been riding Buns since he was a three-year-old. He’s fond of them, they’re fond of him and they’re lighter than I am. They’re good matches for his light exercise regimen.

My nieces, Kamille, six, and Kaleana, four, have been recruited and are doing a darn good job giving Buns short, light rides. Buns, coming back from an injury, isn’t getting any more of a break from teaching the girls how to ride correctly. He has a lot to offer the girls and the girls have a lot to offer him as well.

They work well together. Each of them is getting something out of the experience that they need. The girls get to learn fundamentals such as cueing to walk, trot, stop and back up. They also learn how to steer and they get to practice correct riding posture. 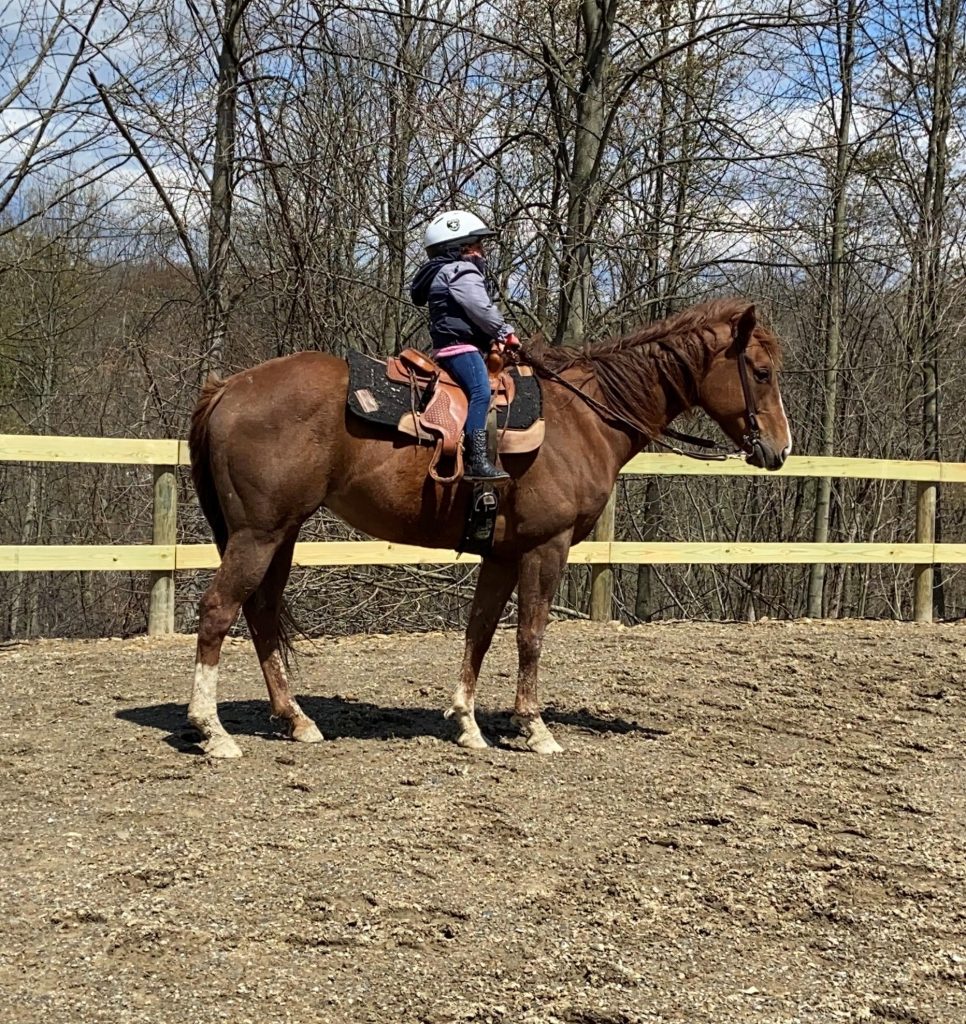 Buns gets 20-30 minutes of light work with light riders so that he isn’t working too hard or straining any of his muscles, tendons or ligaments. Buns has been out of work since October so he has lost most of his muscle mass and is significantly weaker from where he left off.

A typical work out from the girls starts with walking around the arena a couple times so the girls can get comfortable. The girls stop and back him frequently which is good for both parties. The girls get comfortable with asking for a whoa and Buns is building good muscle tone from backing up. 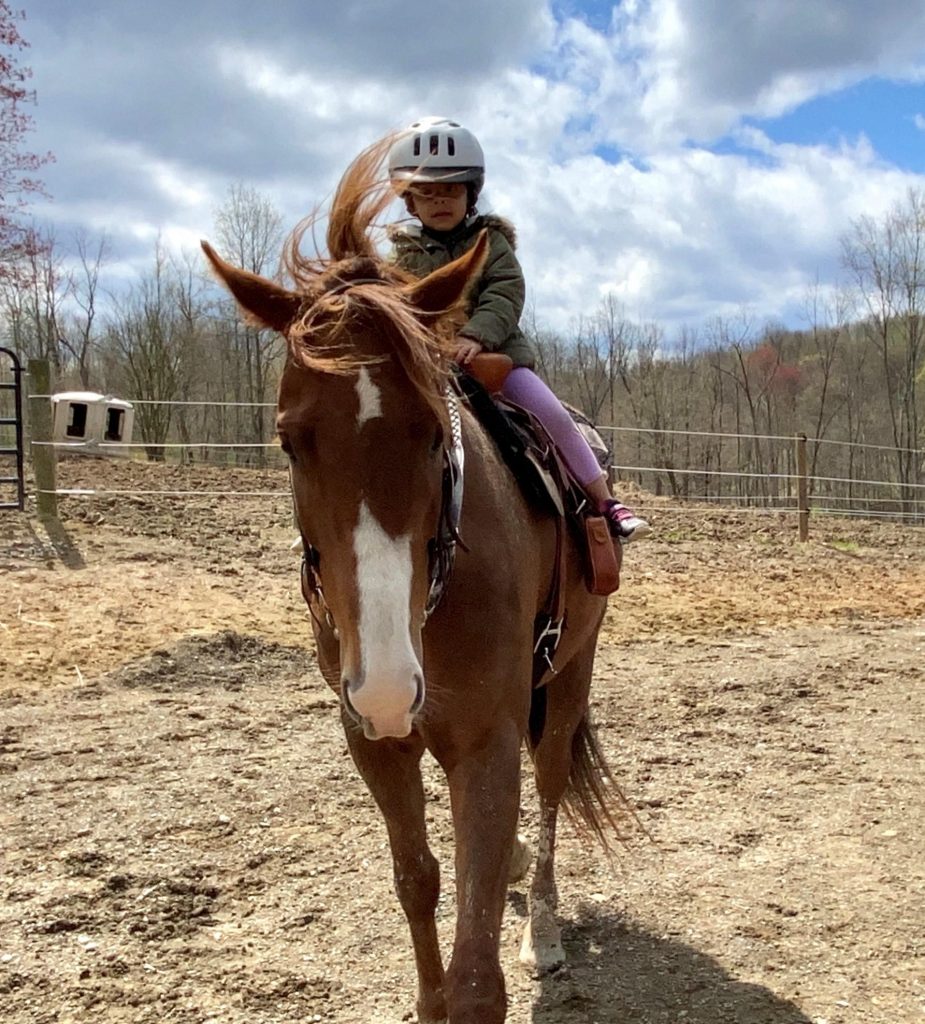 I have to admit, Buns is a bit lazy with them on his back too. He knows he can get away with a few more strides of walking before they get after him to trot. Their little legs just kicking away, they probably feel like a fly landing to Buns so sometimes he doesn’t take their cueing as seriously.

Buns is so good with them, though. It’s amazing that after several months of downtime, most of the time he’s still as quiet as he was when he was getting ridden extensively several times a week. Buns is patient with the girls and the girls are learning what it means to have good horsemanship.

They don’t want to do anything that would hurt Buns. They have his injury and limitations in their minds. A lot of kids that I see at horse shows will run and run and run their horses no matter how old, how thin or how many previous injuries the horse has gone through. I will not let my nieces be those girls. 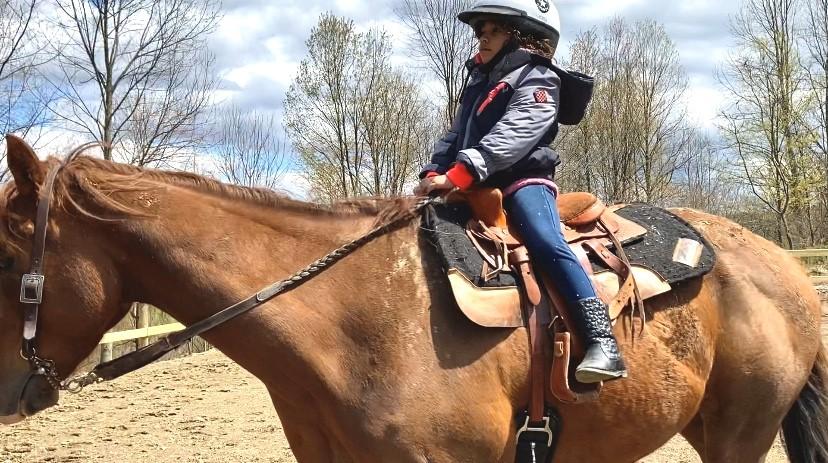 Instilling these good habits starts with situations such as this one. Do they want to canter like wild children? Of course they do. Will they try it if I’ve walked away to work with another one of my horses? Absolutely not. They understand that they could hurt Buns and they do not want to hurt him.

Buns is getting quality care and effective light rides regardless of whether it’s coming from me or from my six- and four-year-old nieces; however, their grooming skills are lacking a bit and need to be revisited!