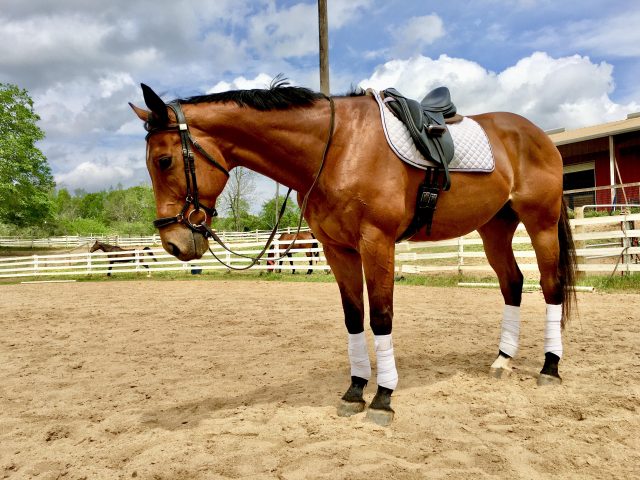 Figuring out horses — what motivates them, what they need to eat, what’s wrong with them, what their personalities are — can be quite the puzzle. For people who have a proclivity for overanalyzing — people like Aubrey Graham — figuring out this puzzle keeps them busy and engaged throughout the training process.

For 616 accepted trainers, the journey to the Retired Racehorse Project‘s 2020 Thoroughbred Makeover and National Symposium, presented by Thoroughbred Charities of America, has begun! Over the next eight months, four of those trainers will blog their journeys, including their triumphs and their heartbreaks, successes and failures, for Horse Nation readers. This week Aubrey Graham discusses how she’s furthering Boomer’s training — and where her proclivity for analysis comes in.

“Don’t you ever miss using your brain?” my father asked back in January. He had come to visit for a week and ended up hunkered down in my barn, refurbishing jumps and bribing my pig into friendship while we rode out some of the worst cold rain of the early winter. 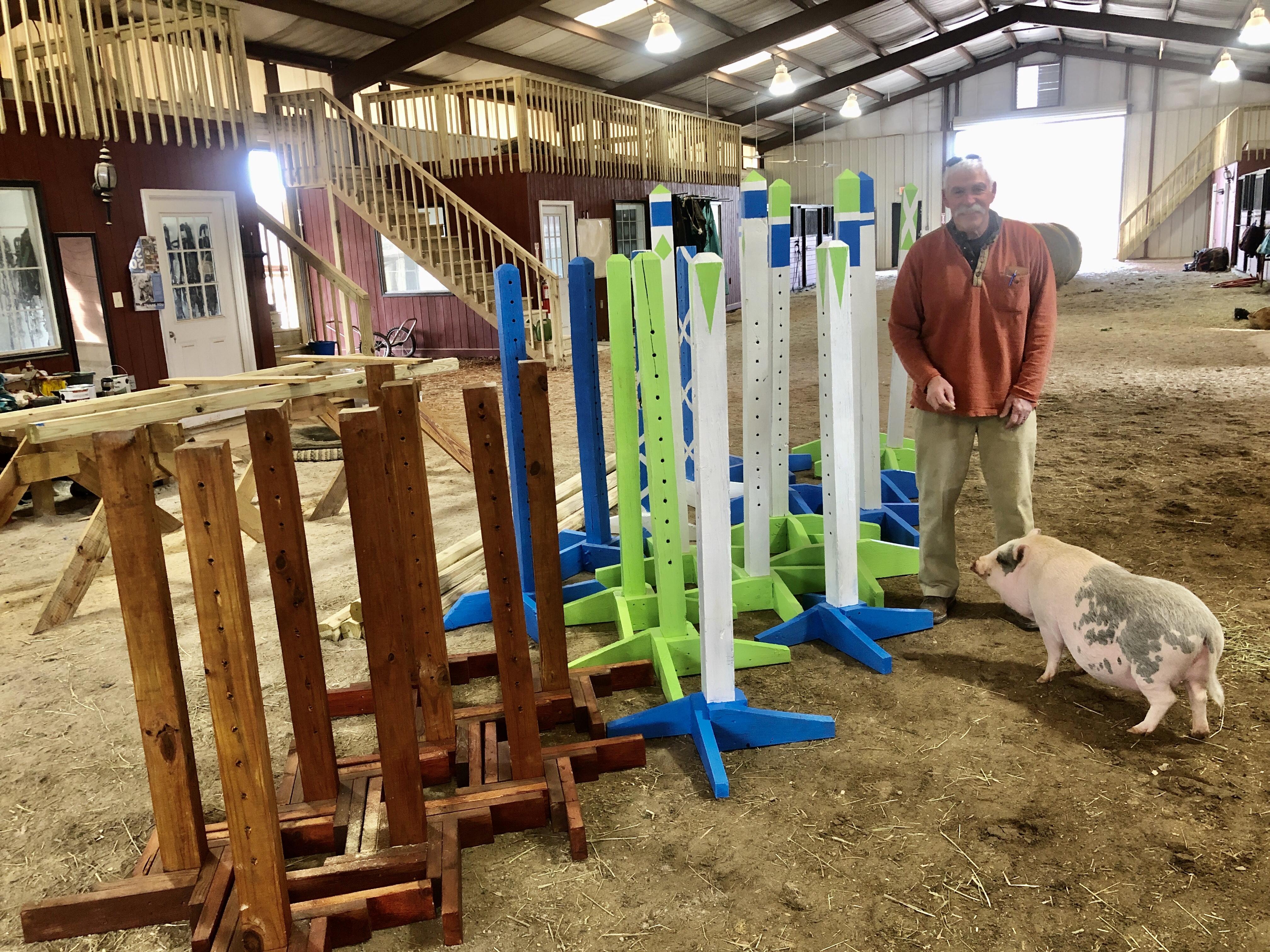 My dad poses with his handiwork and “Pig” the pig. Photo by Aubrey Graham.

The question came over wine after about five days of watching me do barn chores and train in the mud. On one hand, his question was playful; on the other, it exposed what it looked like for me to have shifted priorities from teaching university classes to wrangling a barn full of mostly young, off track Thoroughbreds.

My response at the time had been to laugh and generically insist that, like everyone who rides 1200-pound animals (and particularly young Thoroughbreds), I have to use my brain. Plus, I contended, even stall cleaning gives you the headspace to work through challenges and life decisions. In the months that have followed that conversation, Boomer (JC Vanderboom Ridge) has provided a comical, nearly exaggerated example of the need for critical thinking. The big bay gelding is a contradiction: stoic and sensitive. He is so quiet, unemotional and unphased on the ground that I have both handed him off to my partner at a show and tied him to the trailer before and after a trail ride. 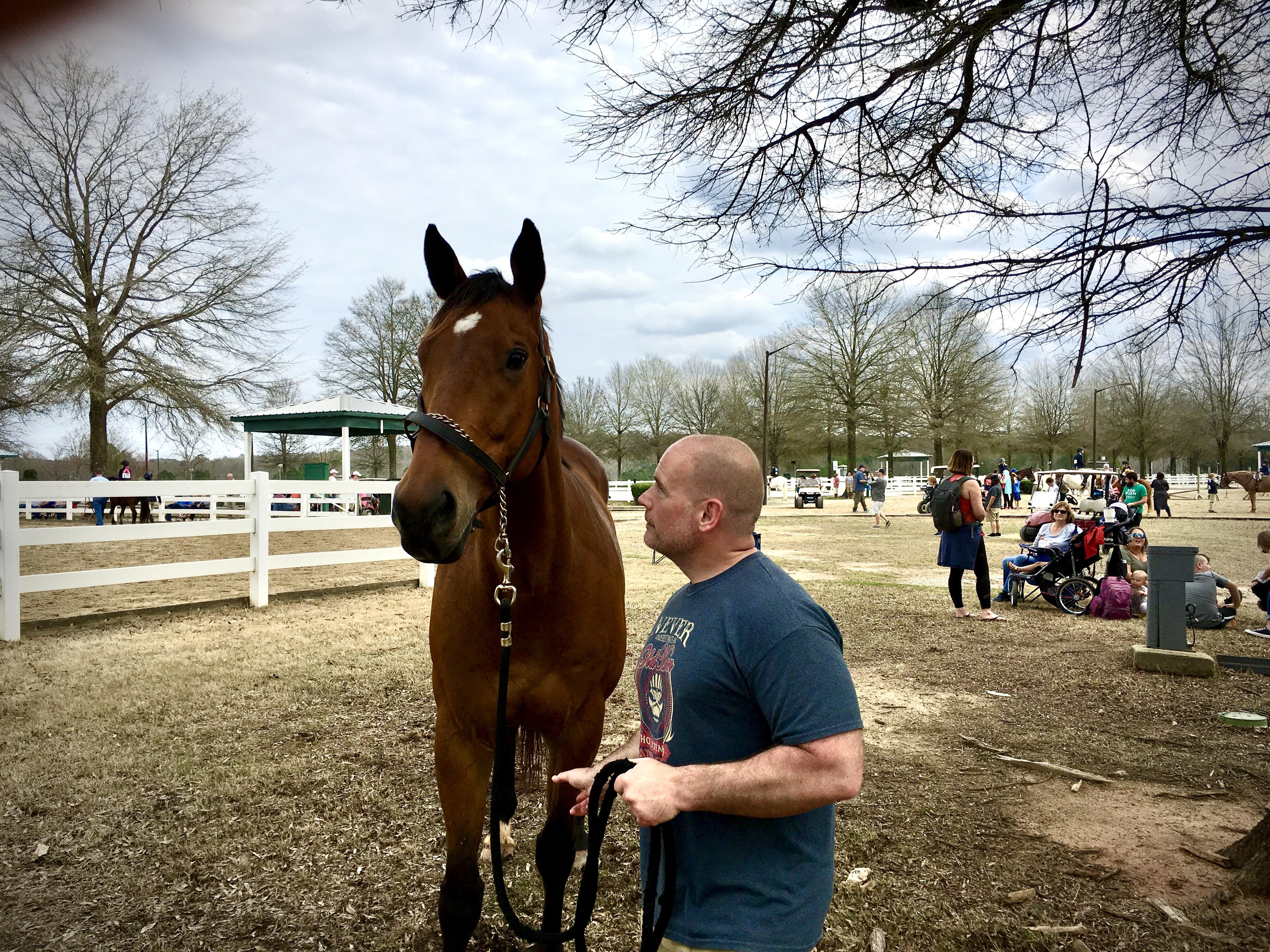 Greg hangs out with Boomer while both sight-see at the HJFox show before the shutdown. Photo by Aubrey Graham.

Both incidences were remarkable due to their utter lack of drama. 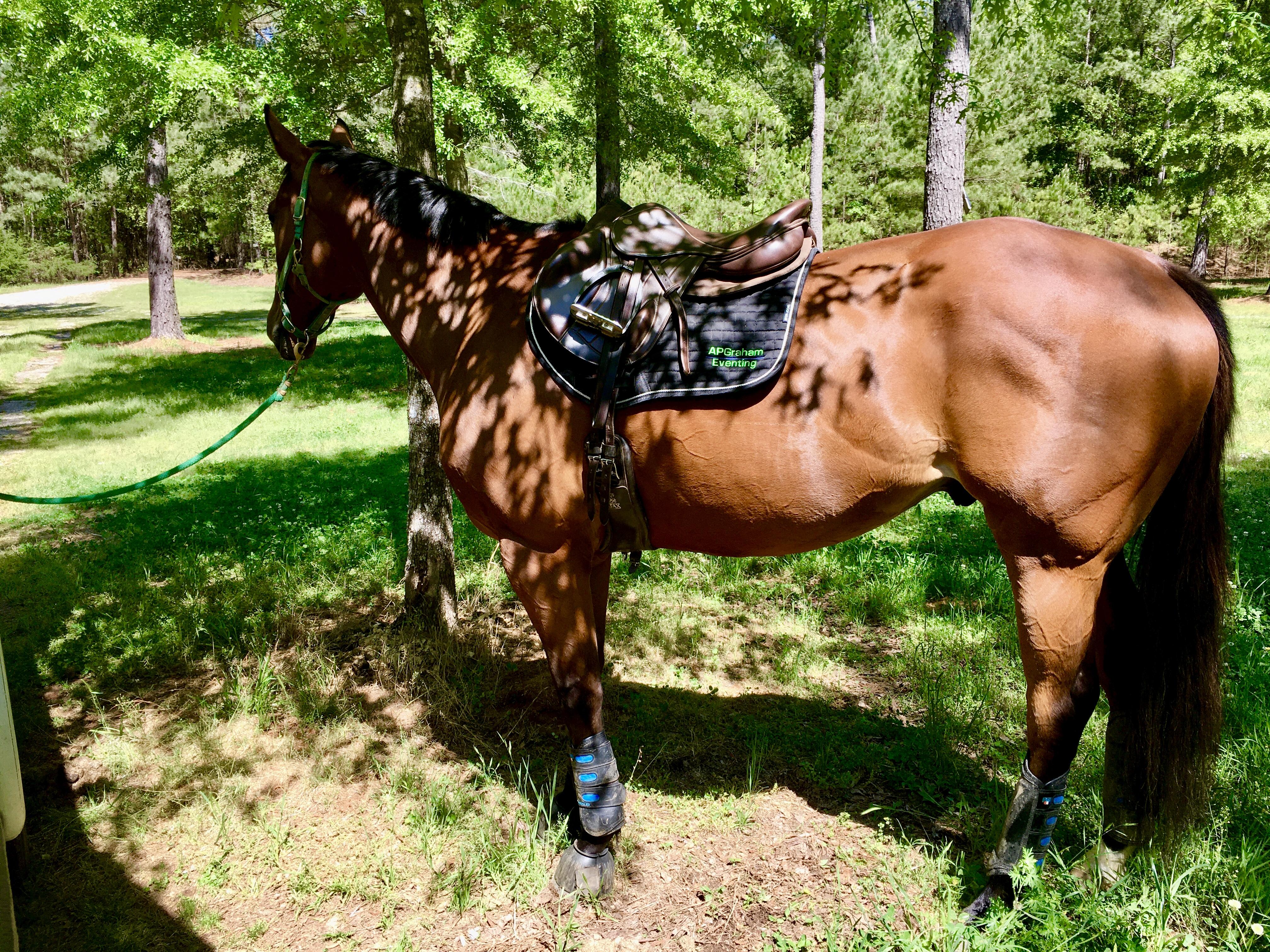 Boomer astounds me by staying quietly tied at Ashland Farms in April. Photo by Aubrey Graham.

Despite his stoic nature on the ground, under-saddle Boomer is simultaneously sensitive and steady. He’s not particularly fussy, but switched-on and sometimes over-responsive. That said, he also finds it easy to ignore subtle corrections until they have been fully made plain. For instance, back during our first handful of post-track rides, Boomer channeled his inner irritated giraffe – head resolutely in the air. For quite a while, I ticked through my usual light-contact go-to options: I offered steady inside leg to outside rein, worked transitions and simple lateral movements, checked saddle and bridle fit and eased him through figure eights. Nope, still a giraffe.

Eventually, I traded subtlety for clearer, more direct communication – “please put your body here.” His ears pricked and his back rounded, head came down and he literally sighed as he trotted in a lovely shape, pushing properly from behind. I could nearly hear him say, “Well if that’s what you wanted, why didn’t you say so sooner?!” 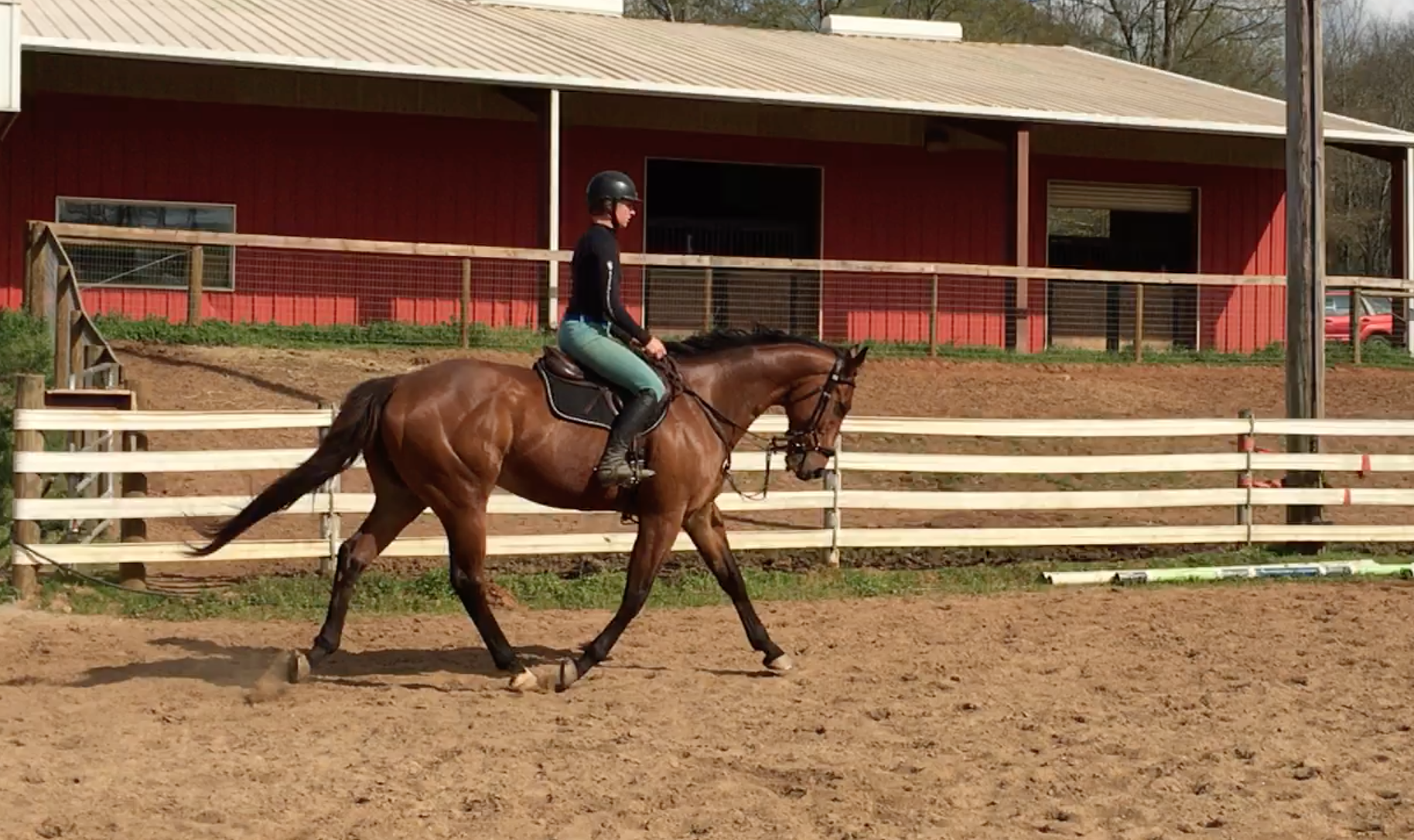 After his giraffe phase, Boomer has really started to figure out how to use his body. Photo by Greg Lyon.

Since then, the proverbial giraffe has disappeared and Boomer’s dressage has continued to grow more composed and confident. However, his efforts over (and sometimes through) jumps, leaves me in a state of suspended analysis. When I watch his videos, I find myself taking mental notes on the placement of his hind end, the shape of his back, his push through his hocks and the lift he manages in an effort to clear the obstacle. The visual information, combined with the feel of riding him on the flat and to the jumps, has produced a set of data (yes, I’m still a nerd) that has loosely shaken out into a three-part training plan. 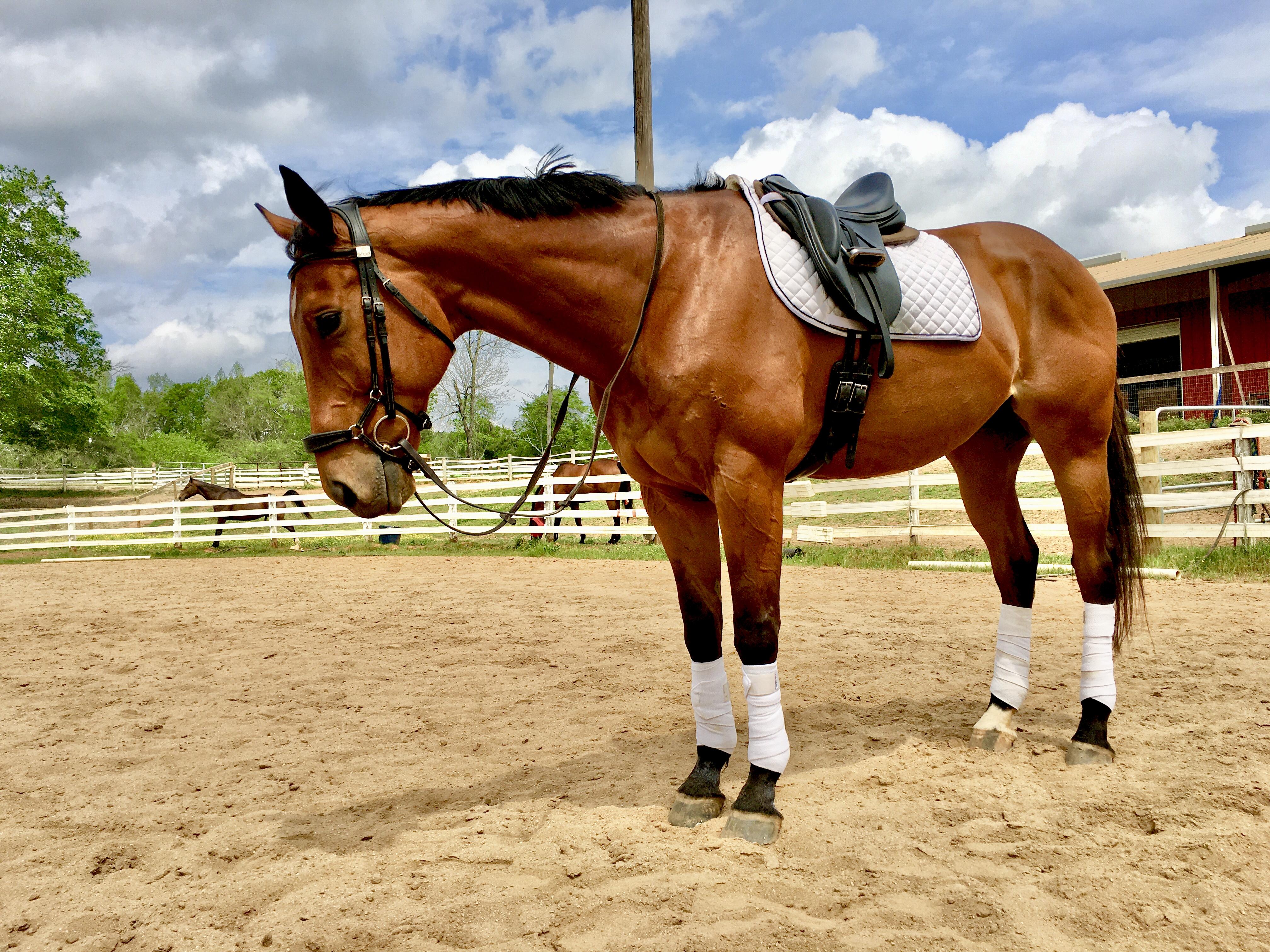 Boomer’s dressage has continued to improve, and he looks pretty snazzy too. Photo by Aubrey Graham.

Before diving into the plan, I need to pause for a second to acknowledge how lucky I am right now. Recently, a number of my equestrian friends have shared an internet meme that posits a picture of farm life and reads, “When you realize your lifestyle is called ‘quarantine.’” Yep, that’s me too – happily situated in a barn at the end of a half-mile driveway. Because I live on a property with an arena, hills, trails, jumps and ample isolation, I am still able to provide the necessary care for the horses here.

I am also remain able to haul to a select few spaces to trail ride and school cross-country (even if I use a tent stake to punch in the farms’ gate codes). While the nation shelters in place and figures out what re-opening might look like, and while the RRP makes plans for what happens at/to the Makeover in October, I am extraordinarily fortunate that I can still train. 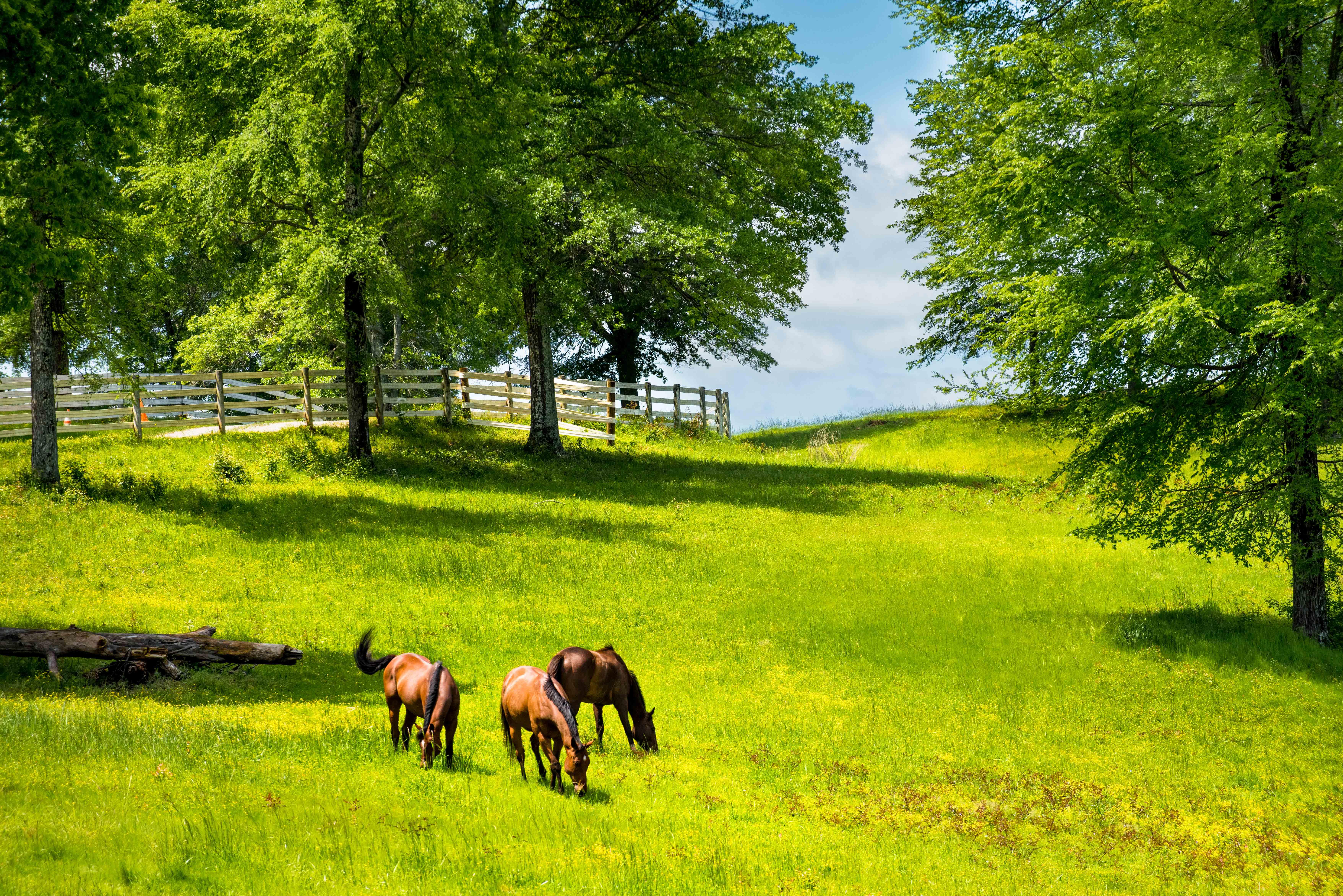 Kivu Sporthorses fields provide a haven in the midst of the pandemic. Photo by Aubrey Graham.

Back to Boomer’s plan: The first part continues to focus on ground poles and eventual gymnastics, working to improve his balance and agility. The second, perhaps more relaxing angle of attack is field and hill work to build hind-end strength. 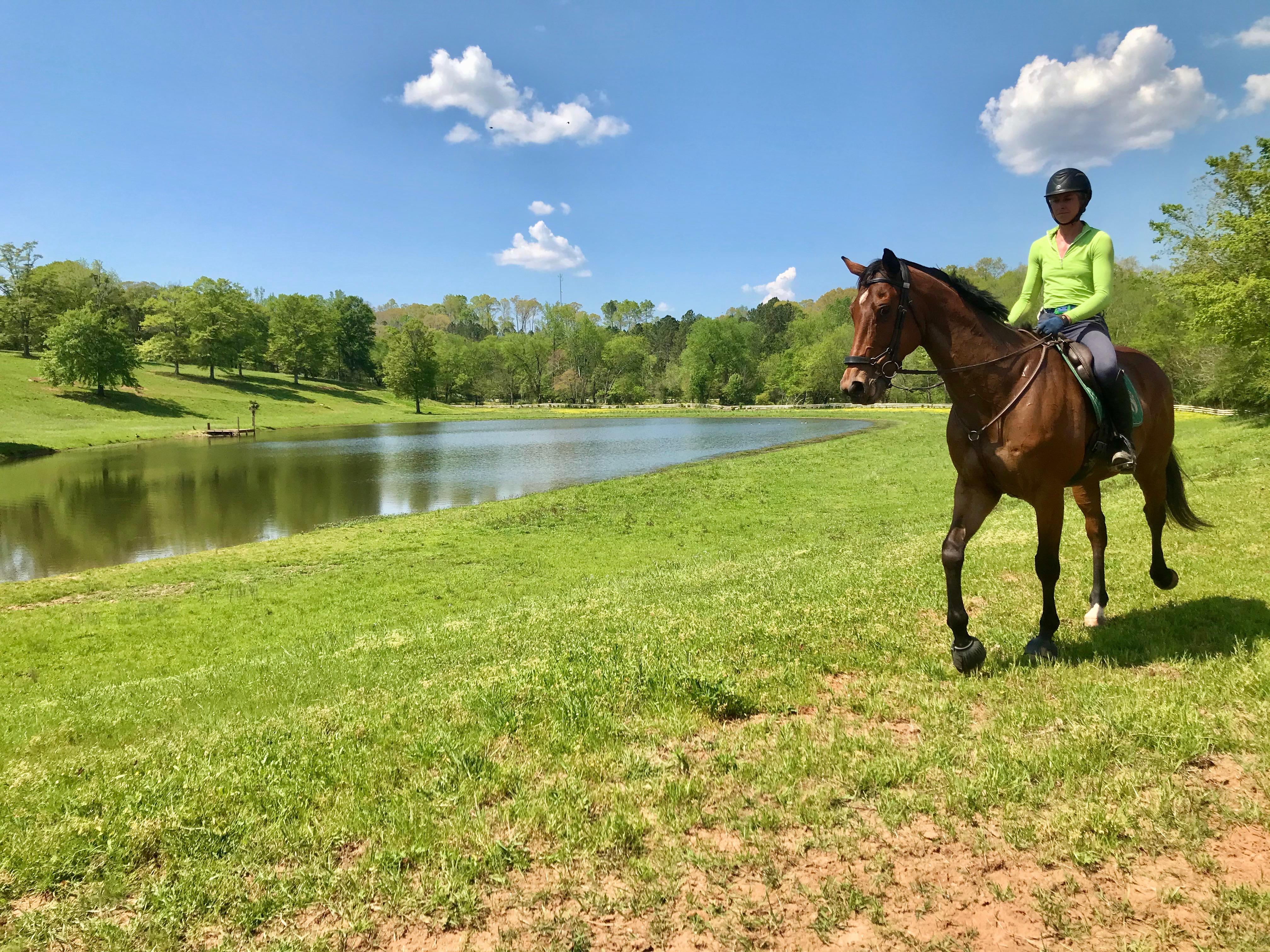 Boomer gets to work in the field. Photo by Greg Lyon.

For the third aspect, I called in the experts. Pulling up his videos, I asked my farrier (Patrick Roth) and my vet (Dr. Dan Carter) to have a look. I had no reason to request a lameness exam — Boomer is as sound as the day is long — but I wanted to know if I was missing something. Was there a subtle uneven-ness of stride? A weakness in a push? Was there something that their specifically trained vision would be able to catch that could explain his proclivity to go through or just barely over the fences?

To their credit, they each stood with me and watched collective minutes of footage. Both raised their eyebrows and noted that they had no reason to be concerned at present with what they were seeing. Squinting a bit at the cross-country recordings, my vet – who used to work on the tracks – paused and then walked out to look at Boomer in the field. “How did he run?” he asked. I explained his 49 starts and that he placed in the top three for more than half of his racing efforts. 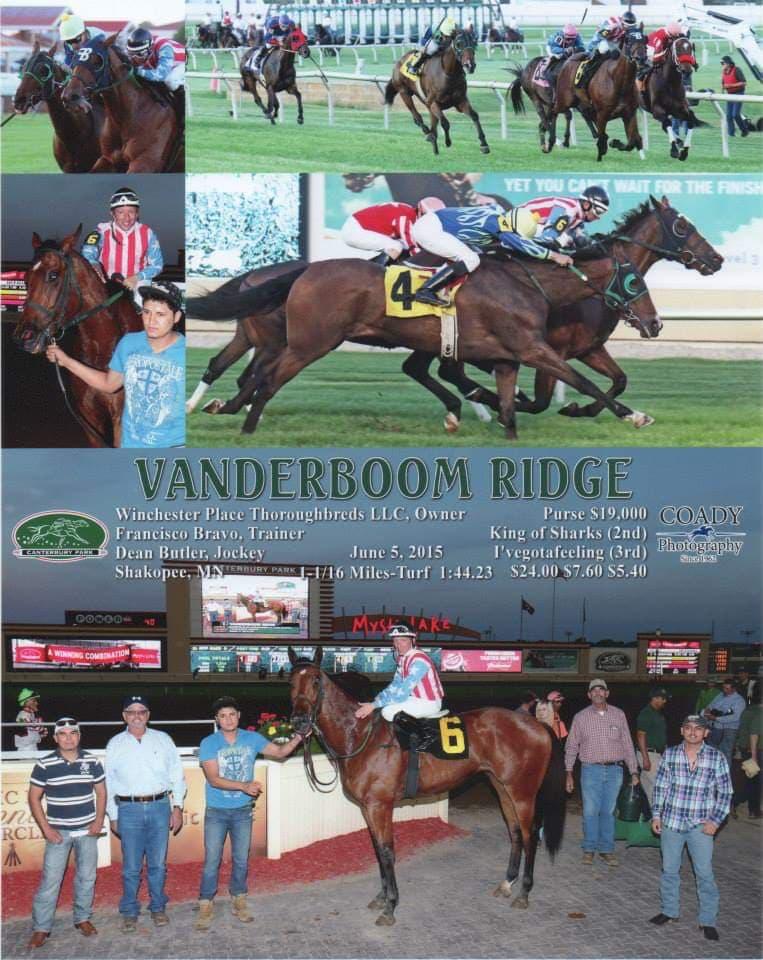 One of Boomer’s win photos from the track. Photo provided by Winchester Place Thoroughbreds.

And thus, the third prong of my training plan was born: finding Boomer’s “give a damn.” The following day, I hauled to Ashland Farms to log some trail miles and school solid, more “remarkable” fences. The first time over a couple of the bigger obstacles he gave a nice push, but he soon realized they were still easy. Overall, like the last time he schooled there, he was brave, mostly careful and game for every challenge, including trotting some novice and lower training-level fences. As he grazed quietly next to the trailer before heading home, I reflected on what seemed to be a mostly successful day. It hit then that the trying to figure out what impresses him is as much about what he enjoys as about what makes him pick up his feet. 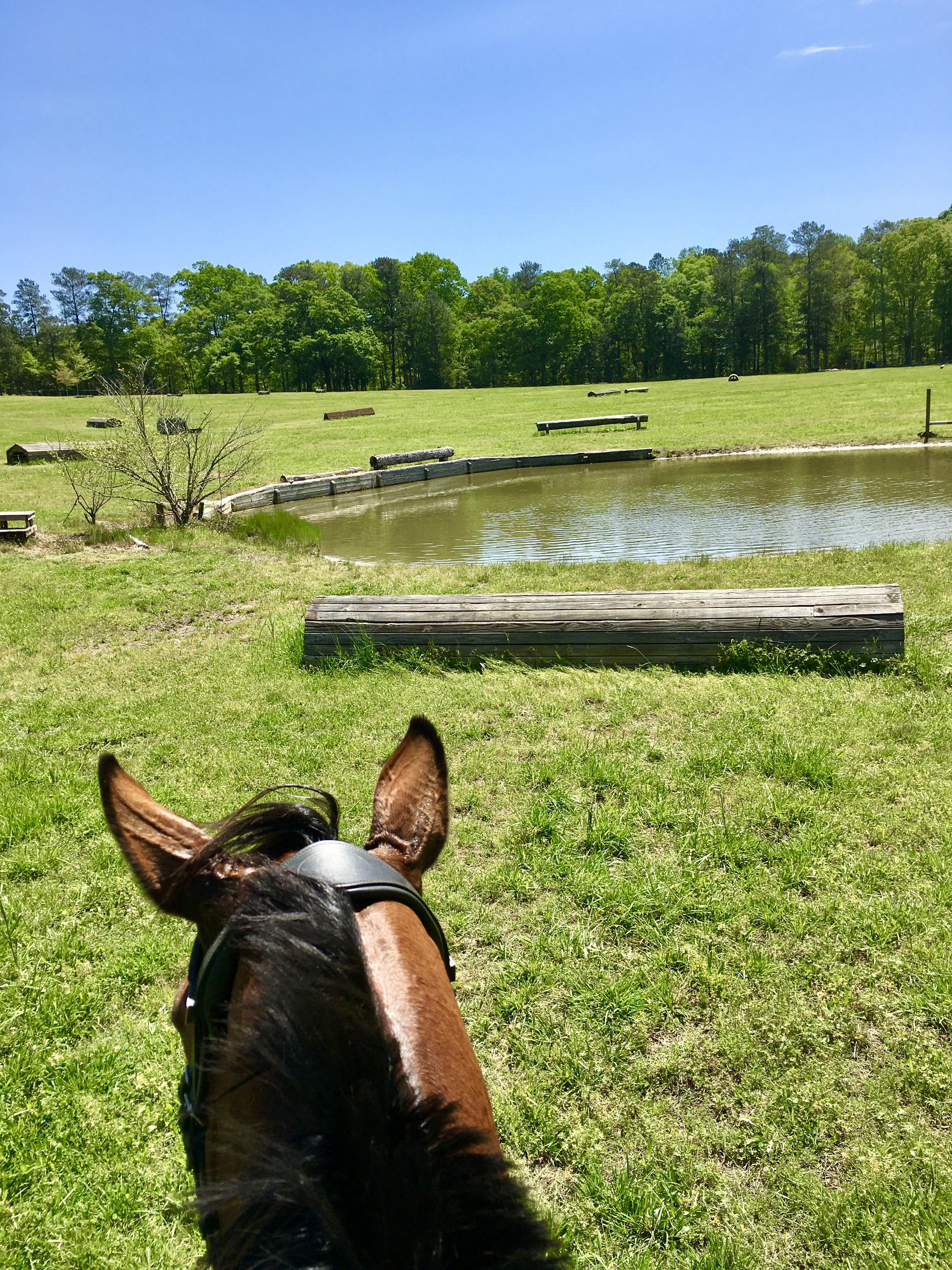 Boomer scopes out some XC fences at Ashland. Photo by Aubrey Graham.

So, as the pandemic continues to shape the present, I’m staying hunkered down and taking the time to put Boomer’s training plan into action. There’s no doubt that I will continue to analyze the various exercises, rides and video footage – and make changes along the way. Because after all, even if I’m based in a barn, the nerdy, over-analytical nature that drew me to academia and Thoroughbreds in the first place doesn’t seem to be going anywhere.