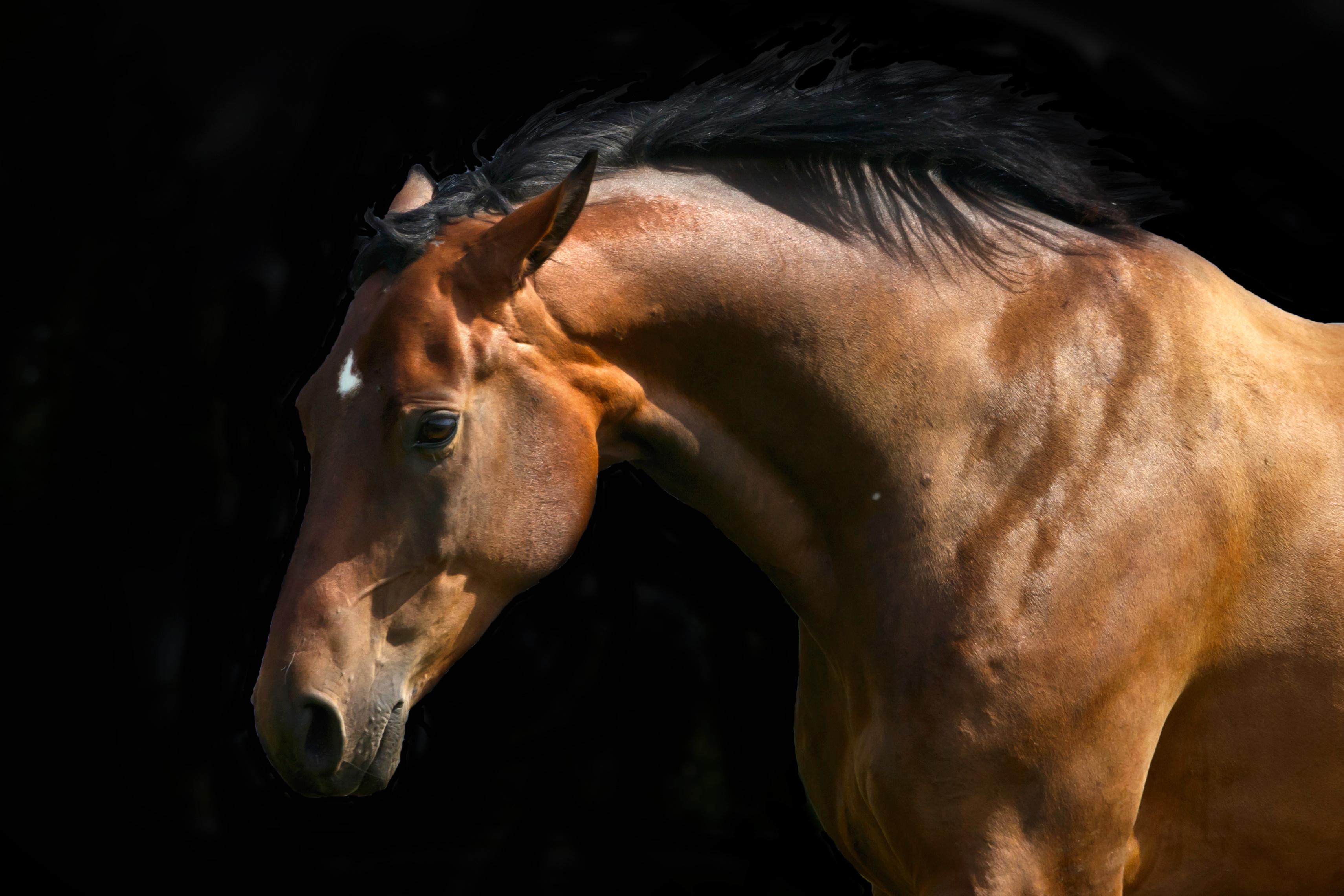 April 24, 2020DeAnn SloanAmanda Uechi Ronan#ESSAY, #OTTBComments Off on Knowing When to Say No: Admitting When a Horse Isn’t the Right Fit

“Horseback riding is a relationship and … should be pleasant for all parties involved. There should be mutual give and take and if the relationship turns toxic, you should have the opportunity to step away without being ostracized by other people in our community.”

I recently returned an adopted horse to the organization from which I adopted him and this is the first time I’ve talked about it. I didn’t post anything about it on my social media and, besides a few close friends, nobody really knows. The secrecy is a direct result of the guilt I feel for the relationship not working out and fear of public shaming. A quick look at the comments on any article about selling or rehoming a horse will give you my reason why. Most are adamant that the author “didn’t try hard enough” or “went in unprepared,” or a million other variations of “shame on you, it’s all your fault, the horse had nothing to do with it.” And maybe that’s all true or maybe none of it is or maybe it’s some combination of both.

Let me back up, though, and give you a rundown of my experience.

In November 2018, I adopted an OTTB from a well-known national non-profit. Beforehand, they did their homework. I filled out a lengthy questionnaire, sent in pictures and a description of my property, and they called my references to verify my answers. I’ve been riding competitively in multiple disciplines since I was eight years old. I worked as an assistant trainer all through college. I live on 10 acres with private pastures, a barn, and own two other horses. I don’t compete often, but I might get out to a local schooling event now and then. My resume checked all the right boxes. When it came time to pick a horse, I spoke with the current trainer for over an hour on top of dozens of back and forth emails. It seemed like Goose and I were a perfect match. 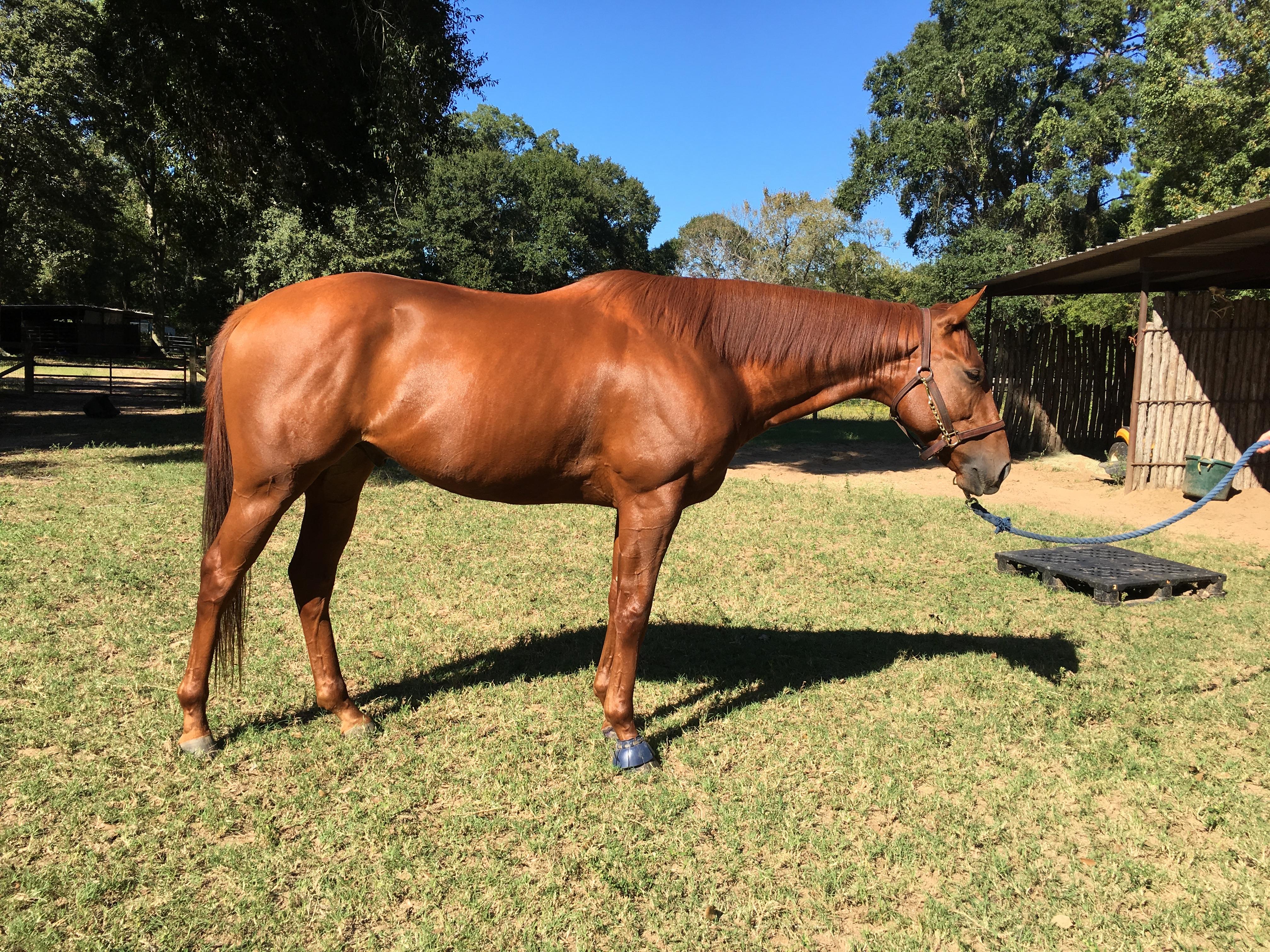 So I sent in my adoption fees and waited impatiently for him to arrive. A few weeks later, when he finally unloaded on my property … he tried to kill my dog. Scary, but understandable. He just endured a cross country journey and he was tired and tense.

Over the next few months, I learned that Goose loved to be ridden and hated almost everything else. He hated grooming. He hated dogs. He hated most other horses. He hated when people came too close during feeding. He hated baths, particularly on his right side. He once pinned me to the wash rack. I had a bruised hip for a week after that incident. I can’t even count how many times he kicked or struck out at me in the grooming area.

I could go on, but you get the idea. He was difficult and ornery. He was … particular. But I tried my best to be patient. He hated groundwork, but we kept trying. He hated being brushed, so I only wiped him with a soft towel. He hated circle work, so I spent hours hacking out in open fields. 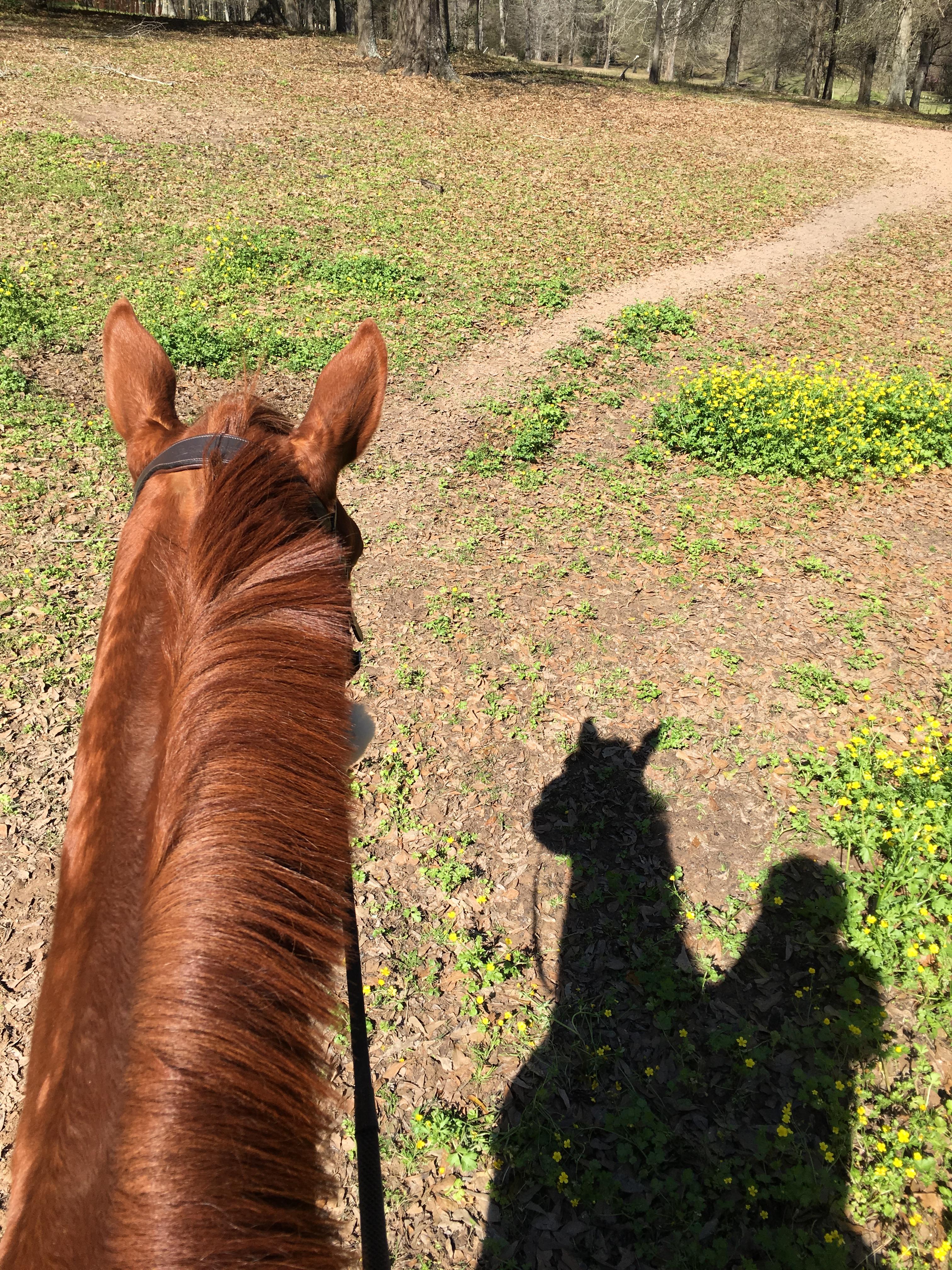 And he rode beautifully, so beautifully I could argue he was one of the best moving horses I’ve ever owned. I began day dreaming about blue ribbons and sailing over cross country obstacles while P. Dutty and Boyd Martin clapped for and admired us from the sidelines … hey, a girl can dream.

He could also be a funny and personable horse under the right circumstances. He loved playing in water, making bubbles with his muzzle submerged in a freshly cleaned and filled trough. He loved cats, following mine around with wide eyes and a curious expression. He loved his ears scratched. 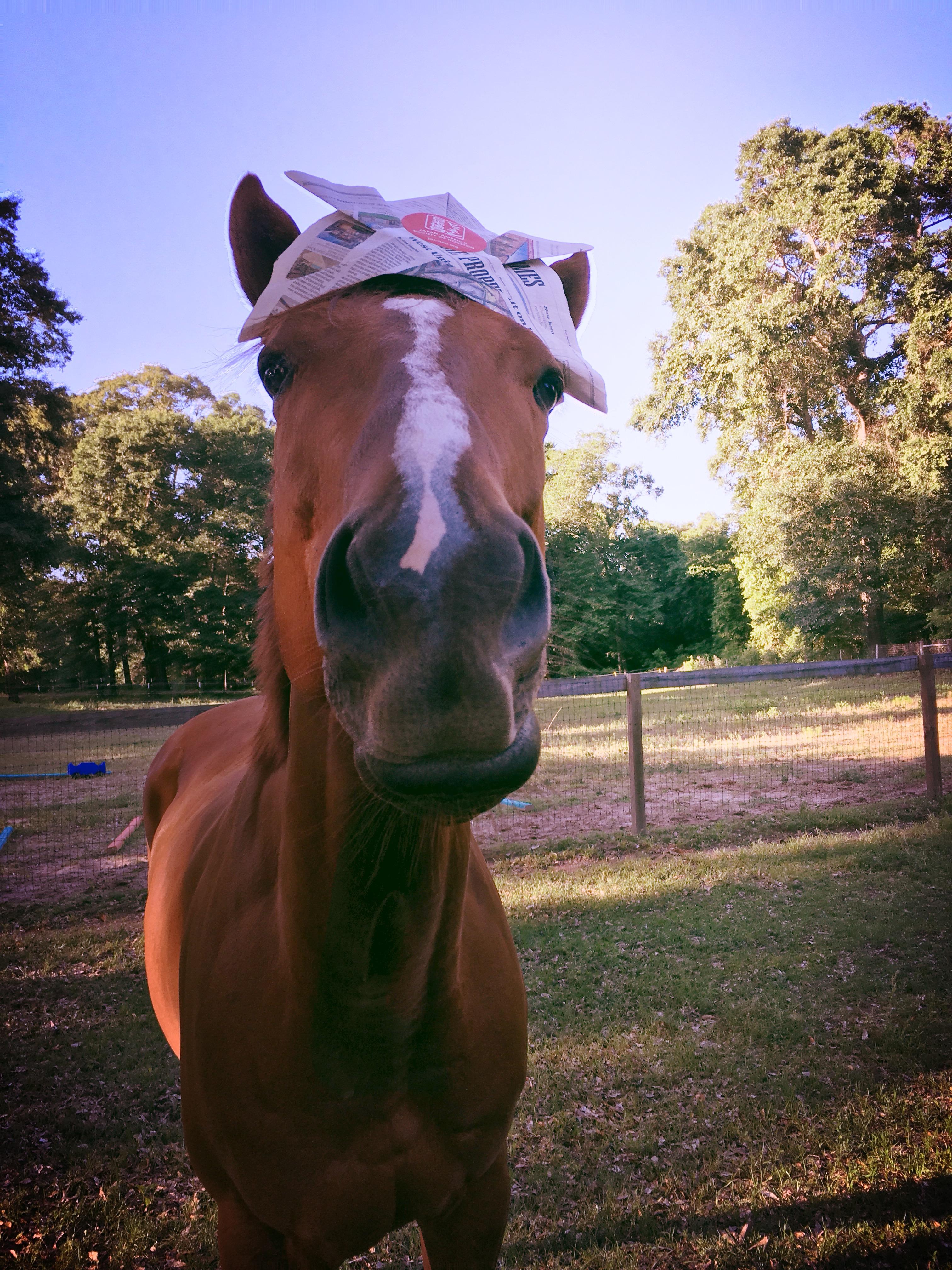 Then, around fall 2019, Goose tried to bite me on the face. It wasn’t just a quick reaction either. He was on the far side of a paddock when he came toward me at a trot with ears pinned and actually lunged at my face. Luckily, I had a lead rope in hand to keep him off of me. Then, a few weeks later, he tried to bite my husband on the face. Same scenario, but without the lead rope. Luckily, my husband can run and jump over a fence pretty quickly.

He also became increasingly aggressive to the dogs and other horses, so we went for a veterinary checkup ASAP. After a gastroscope, he was diagnosed with mild Grade 2 ulcers. We treated them aggressively. After treatment, his attitude didn’t improve. He started tearing the top rails off of fences and kicking at us every time we entered his stall. On one occasion he “killed” the wheel barrow and muck rake.

We took him back to the veterinarian and ran blood panels and even a cryptorchid test to check testosterone levels. Everything came back normal for a gelding. So, we went back to the basics with groundwork … again. He charged me half a dozen times in the round pen, teeth bared, once even grabbing onto the lunge whip with his mouth, before I gave up.

Amazingly, you could still jump on this horse and go for a solo trail ride on a loose rein with a thunderstorm brewing on the horizon and he never spooked. The safest place around Goose was in the saddle. 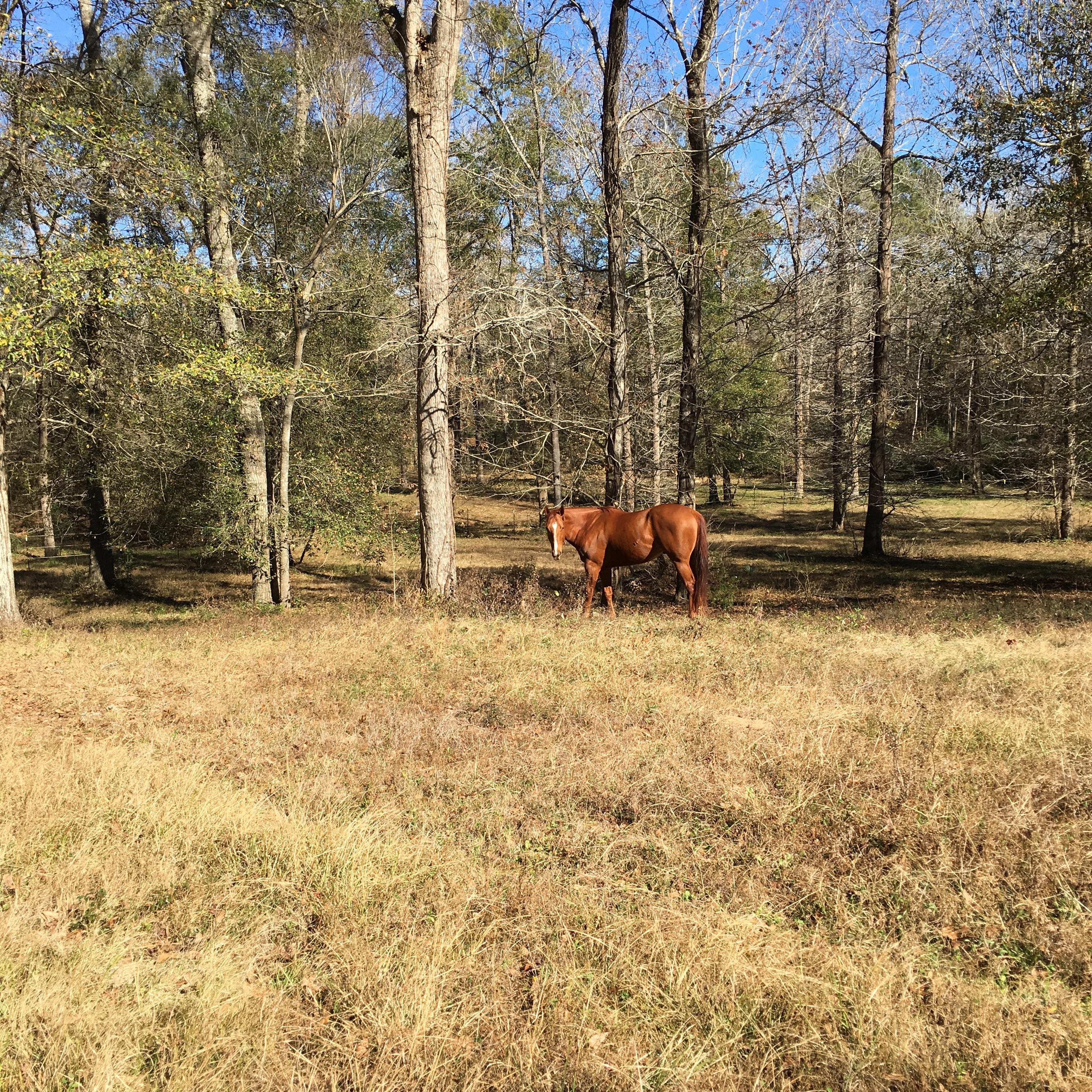 Goose from a distance. Photo by Amanda Uechi-Ronan

But then I started having vivid nightmares about a fence going down and him escaping into an adjoining pasture and injuring my other two horses, killing a dog, or biting my daughter. The fear from the nightmares bled into real life and I became jumpy even leading him to and from his paddock.

That’s when I called the adoption organization and said, “He has to be returned to the program. I’m really sorry.”

He remained with me for a few weeks before being placed at a retraining center at the end of March. During the interim, I groomed him, always with a second handler present, but otherwise left him alone. I felt awful.

Now he’s gone, and, though I worry about him, I feel nothing but absolute relief. I hope his new trainer can reach him in a way I couldn’t, because, if she can’t, I’m afraid he’ll be euthanized.

So why am I saying all of this?

It’s because, if nothing else, this situation has taught me that there are horses that are not meant to be handled by even advanced amateurs. They need professionals. They might always need professionals. I missed tiny problems that snowballed into behavioral avalanches that a professional would have nipped in the bud immediately.

It has taught me that sometimes a horse just isn’t the right horse for you and your living situation. Maybe he’ll be just fine in a busy stable with more daily physical and mental stimulation. Maybe he’s a hustling go-getter and I was trying to pigeon hole him into a “small provincial life” like some Disney villain.

It has taught me that all living things are complicated individuals and maybe he has the equine equivalent of bipolar disorder or PTSD. We barely understand our own brain morphology and function, so I’m sure we’re light years away from understanding brains outside our species.

What I’m saying is, there could have been a million and one reasons why this didn’t work out and there could be a million and one reasons why his next situation will be perfect. So we shouldn’t be ashamed and we shouldn’t condemn each other for selling and buying horses. Horseback riding is a relationship and, like any relationship, should be pleasant for all parties involved. There should be mutual give and take and if the relationship turns toxic, you should have the opportunity to step away without being ostracized by other people in our community. There are plenty of things to divide us nowadays, and our mutual love for horses shouldn’t be one of them.

Amanda Uechi Ronan is a fiction author located just north of Houston, Texas. Fully committed to her “jack of all trades, master of none” persona, she has trained and competed in AQHA western performance events, reining, team penning, dressage, eventing, competitive trail, polo, polocrosse, and is currently attempting working equitation. If you want to talk, i.e., fangirl about horses or books, check out her Instagram @uechironan.