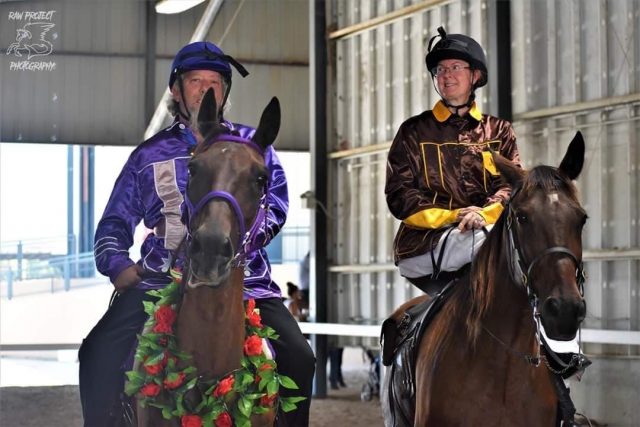 Standardbreds as sidesaddle mounts? Absolutely! The next installment of Stories of Standardbreds serves to remind us just how versatile this breed is. 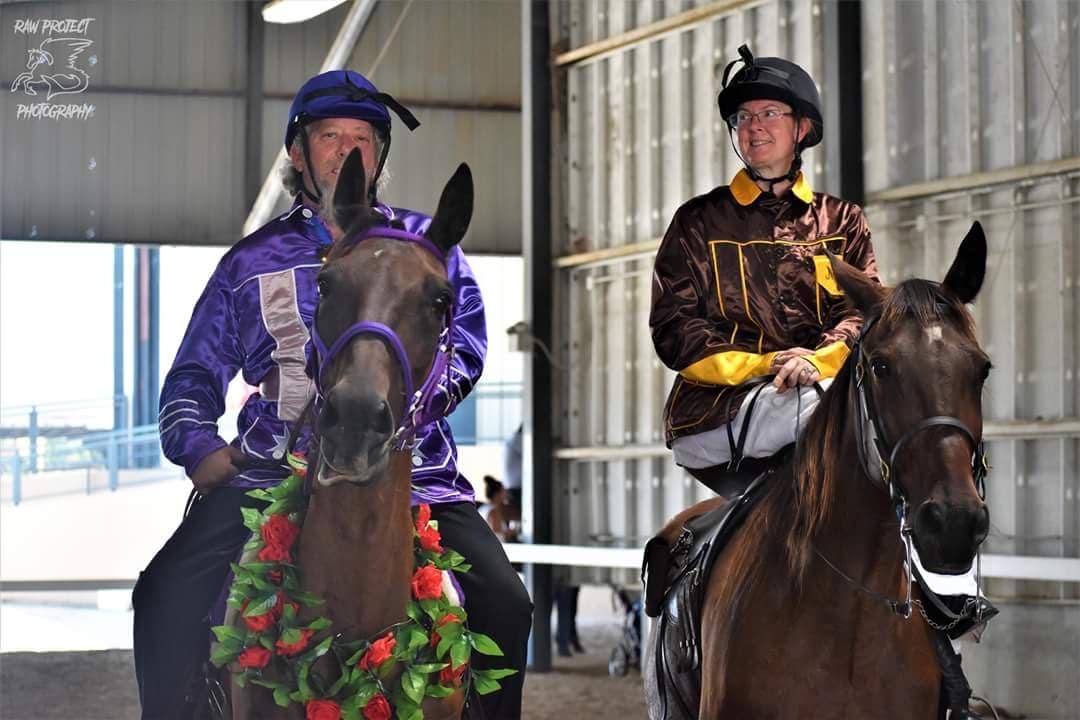 Maggie Pritchard-Herlensky is the President of the American Sidesaddle Association. Maggie started riding as a child, but due to juvenile arthritis riding astride was painful for her. Being a child, she ignored the pain and rode anyway, but when she was a teenager, her mother read an article in the Western Horseman about sidesaddles being used for people who had physical problems. Maggie’s parents went to a poultry swap meet in southern Ohio and picked up a sidesaddle for Maggie. As a 16-year-old Maggie fastened her new saddle onto her Walking Horse with her dad’s belt and attempted to teach herself to ride sidesaddle from a handful of old books written in England in the 1800s. Maggie found it hard to make the books applicable to a teenage western rider from the United States. But that saddle and those books started a love affair that has lasted for Maggie’s entire riding career. 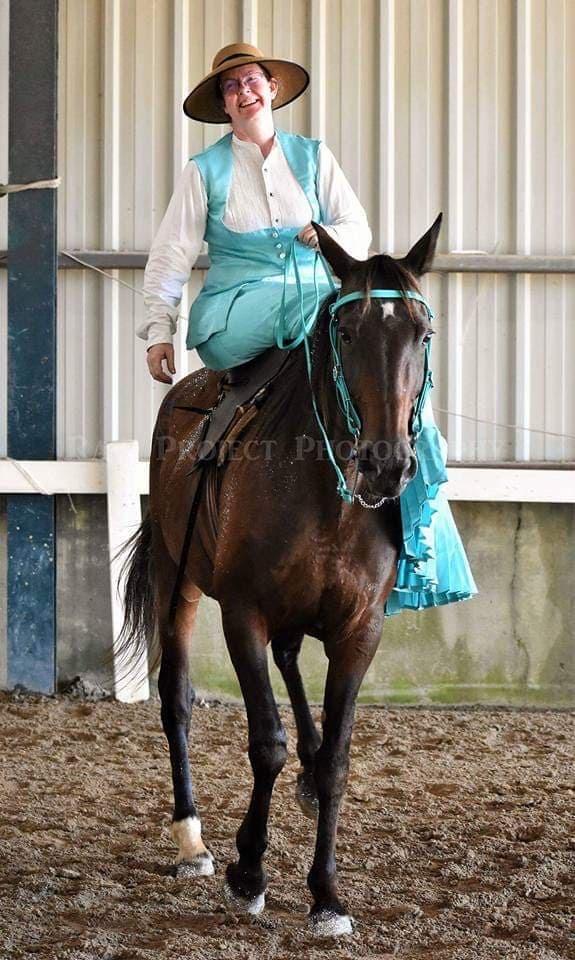 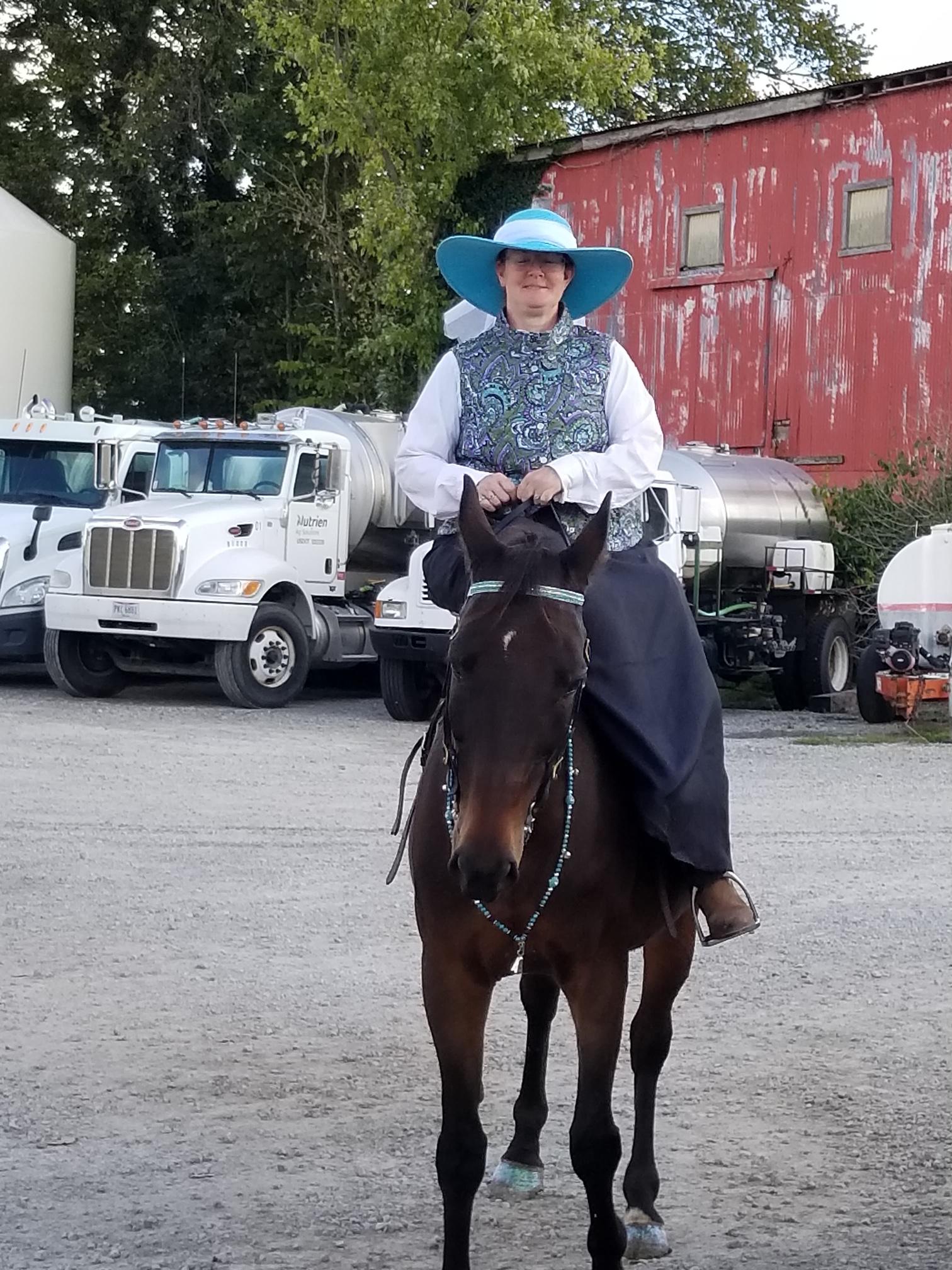 When Maggie was a child attending a camp run through the Harness Horse Youth Association at Scioto Downs in Ohio, she rode her first Standardbred. About 25 years later Maggie took in a Standardbred who had been retired from racing. Maggie hopped on her newly retired racehorse for the first time, expecting him to be nervous and hyper, but encountered a horse who was quiet and game to work, so she declared him broke to ride and off they went.

Maggie has shown a bit in her day, but mainly considers herself to be a parade rider. She and her fiance and his grandchildren ride in parades and promote Standardbreds and sidesaddle riding. Maggie’s main horse is a Standardbred named Cafe Bar, who she adopted through Starting Gaits. Cafe Bar was a pacing mare, who raced for three seasons and who earned over $350,000 during her racing career. After retiring she was used as a broodmare for several years before she went to live with Maggie. Cafe Bar is now 18-years-old and she has now traveled all over the United States with Maggie. Some of the parades they have attended over the years include the Kentucky Derby Festival Parade, the Chicago Thanksgiving Parade, the Gettysburg Remembrance Day Parade and Breyerfest. 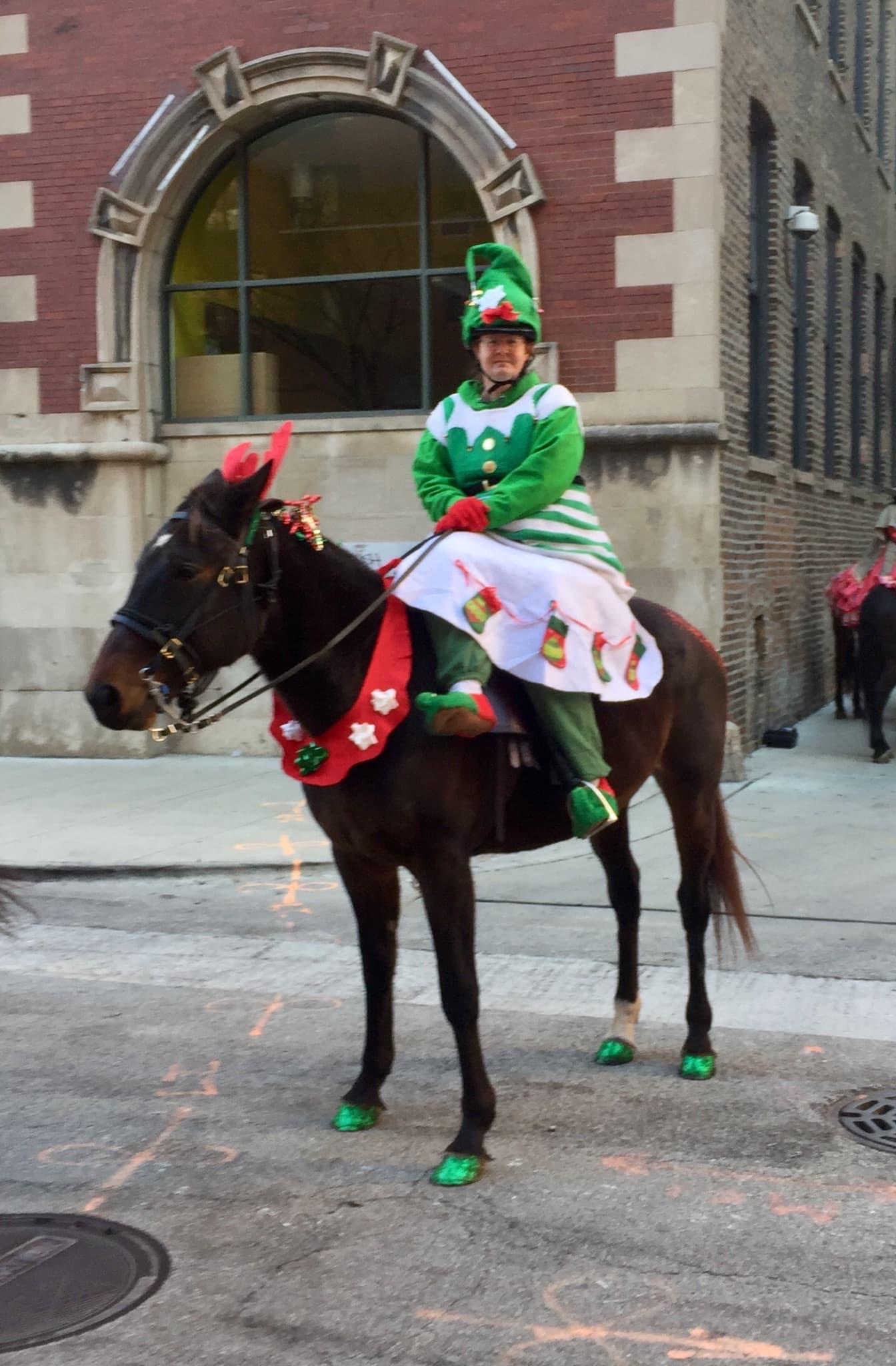 Maggie on Cafe Bar and Bryan on Quent’s Knight at the Chicago Thanksgiving Parade 2017. Photo courtesy of Maggie Pritchard-Herlensky. 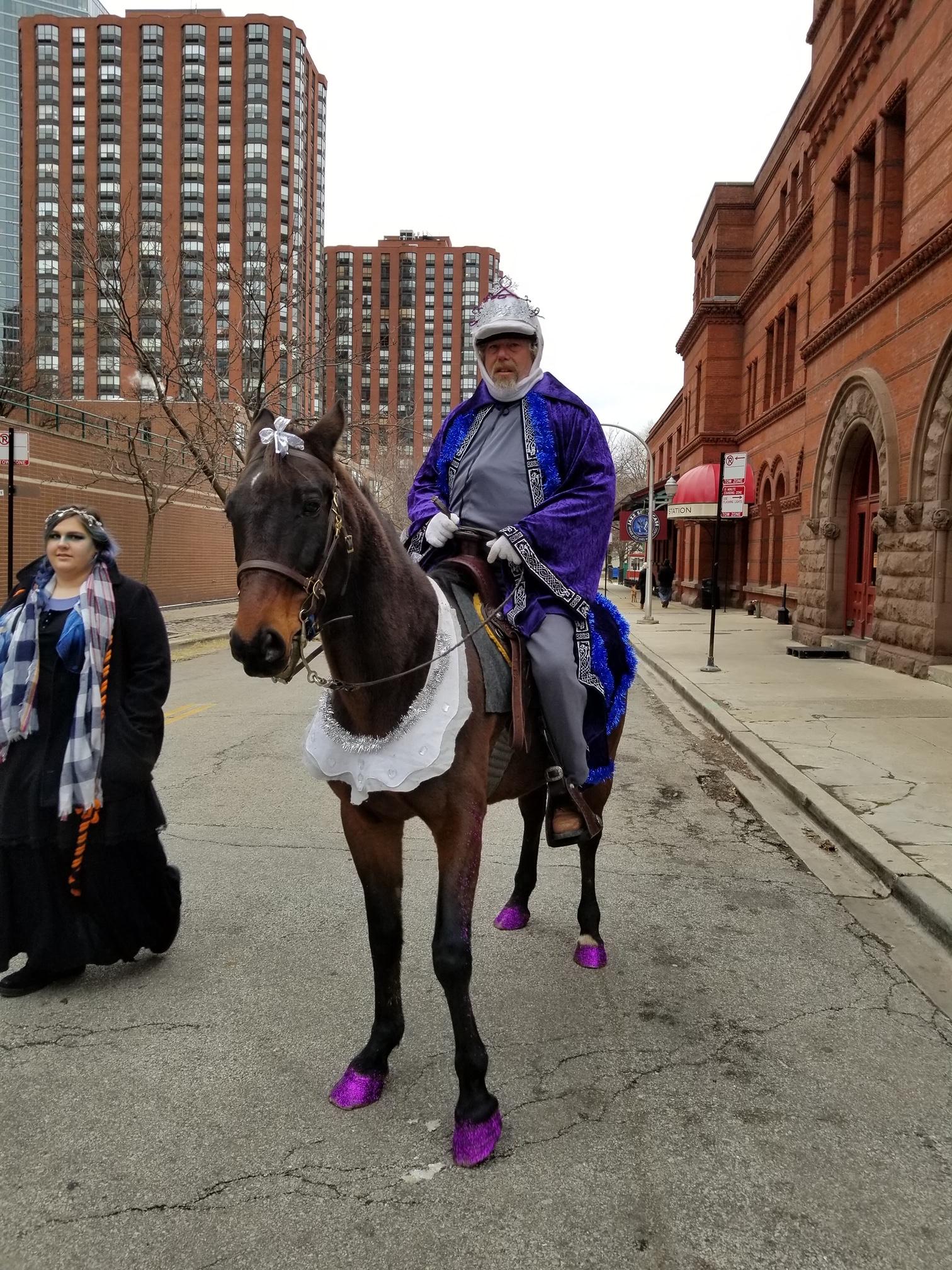 Maggie’s fiance Brian McAllister rides in parades aboard another Standie, SB Quents Knight. Maggie says that Standardbreds are perfect parade partners. They come off the track ready for anything, step off the trailer and go, “Oh, so we’re doing this today…okay.” You could expect them to do anything from trail riding to roping to showing to parading and Standardbreds will just roll with whatever you throw at them. Maggie said that Standardbreds make particularly excellent sidesaddle horses not only because of their calm, game natures, but because they tend to fit well in older sidesaddles that were designed for old fashioned style Thoroughbreds. Old fashioned Thoroughbreds and Standardbreds are very similar in skeletal and muscular structure. So a sidesaddle built in the heyday of Fox Hunting would likely fit well on a Standardbred.

When asked for her advice for people considering a Standardbred as a sidesaddle or parade horse, Maggie said to be open to picking up the first sound Standardbred that comes along. She advocates for giving a home to a horse that truly needs one; be it a horse from a rescue, one coming off the track or one coming from an auction. She says that any level of rider really cannot go wrong with a Standardbred and would like to remind readers of how very many Standardbreds there are retiring from racing or coming from the Amish, who badly need homes and that as a result shopping for a Standardbred is easy.

Maggie’s goals for the future include continuing to ride sidesaddle and to attend parades and events nationwide, spreading the word about Standardbred horses and what loving partners they make. 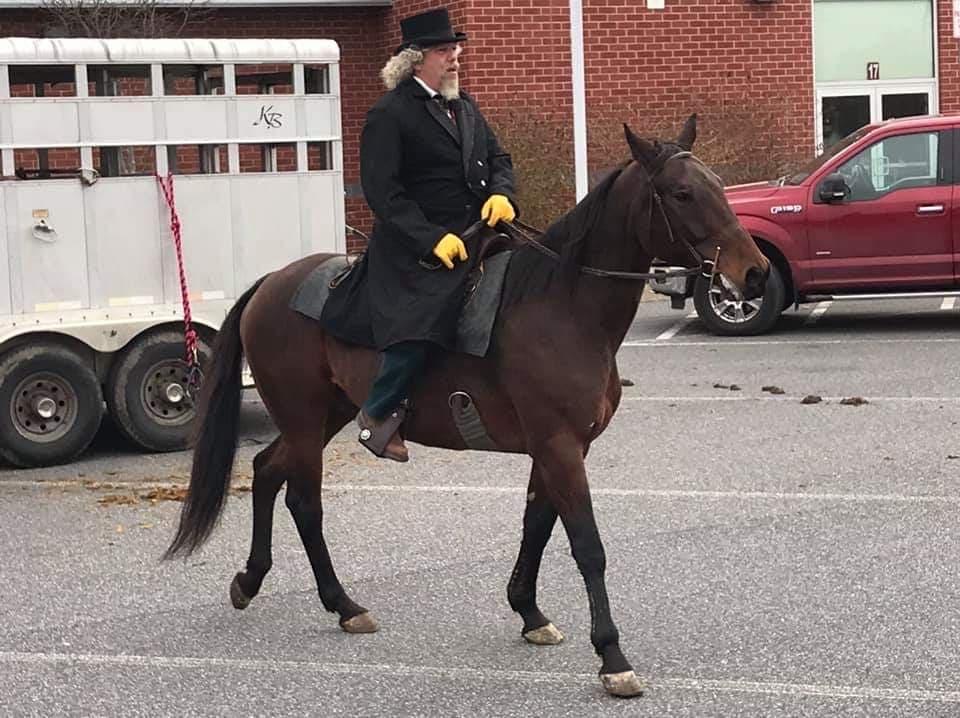 Bryan on This is Wyatt at Gettysburg. Photo courtesy of Maggie Pritchard-Herlensky.