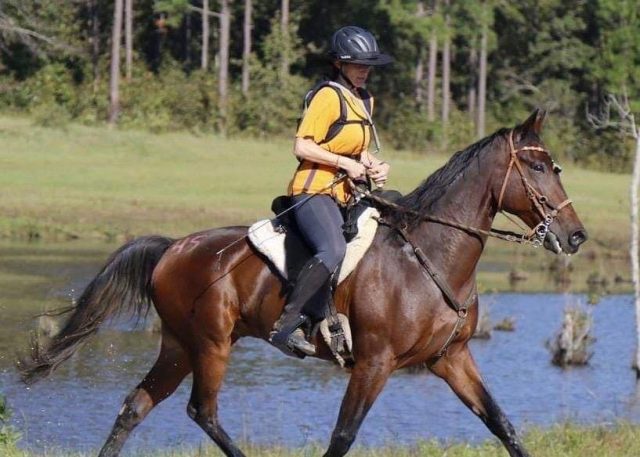 Patricia Clark and her Standardbred East Meets West are true trailblazers when it comes to endurance riding. They are racking up awards and showing how well Standardbreds can do in a sport like endurance.

Patricia Clark and her Standardbred East Meets West turn heads everywhere they go. Patricia adopted East Meets West, known affectionately around the barn as Eli, from New Vocations in 2009. Since then Eli and Patricia have been competing in endurance and limited distance rides. Over the past 10 years, they have accumulated a number of awards. East Meets West was the first USTA Standardbred distance horse of the year. He has won SERA’s 10 Consecutive Finishes award. And he and Patricia have just completed the ride that will award them the AERC Decade Team, an award that is given to a horse-rider partnership that have completed at least one 50 mile ride per year for 10 years. Eli is the first Standardbred to be awarded an AERC Decade Team. Eli has completed 1280 endurance miles and 525 LD miles. Patricia and Eli are pioneers in the world of Standardbred endurance horses and are blazing the trail for Standardbreds and their riders in the endurance world in years to come. 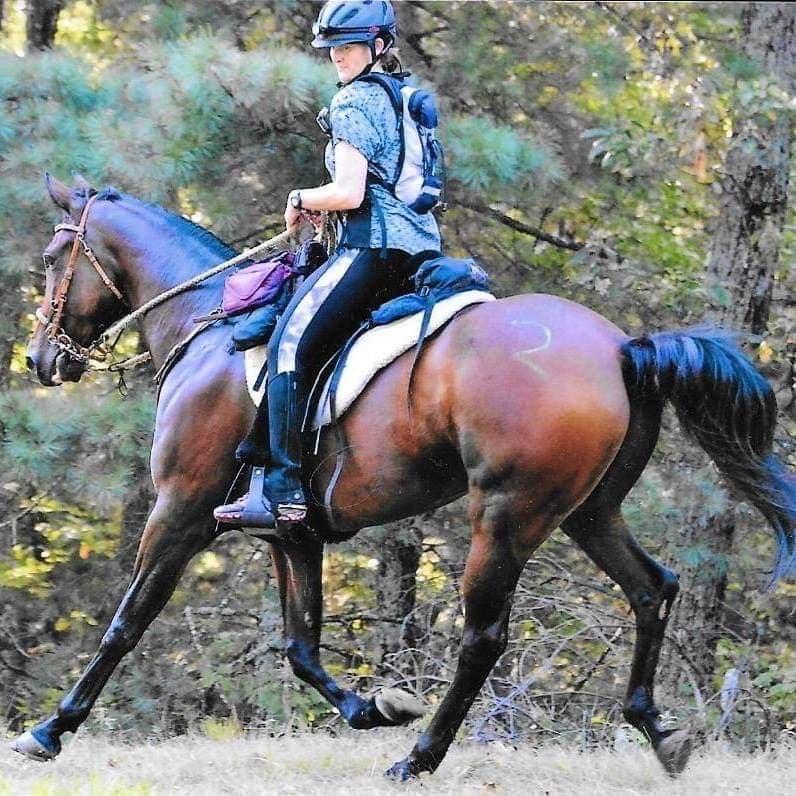 Patricia started riding before she can remember. Her earliest memories are the scent and feel of horses. During her career she has owned trotters and gaited horses. In her younger days, she showed gaited horses on the natural horsemanship circuit before she became disillusioned by the politics of horse showing. While putting herself through college, she spent five years working as a colt starter. Patricia was always and avid trail rider, and regularly would ride 20 miles in a weekend. One day, her farrier, an endurance rider, asked her to join him on a conditioning ride and she was hooked. Endurance was right up her alley and suited her much better than showing had and she took to it like a duck to water. Patricia’s been competing in endurance riding since 2008 and has completed 73 of 79 starts for a 92% completion rate. She has 2865 combined LD and endurance miles, including one 100 mile competition and several 75 mile rides. 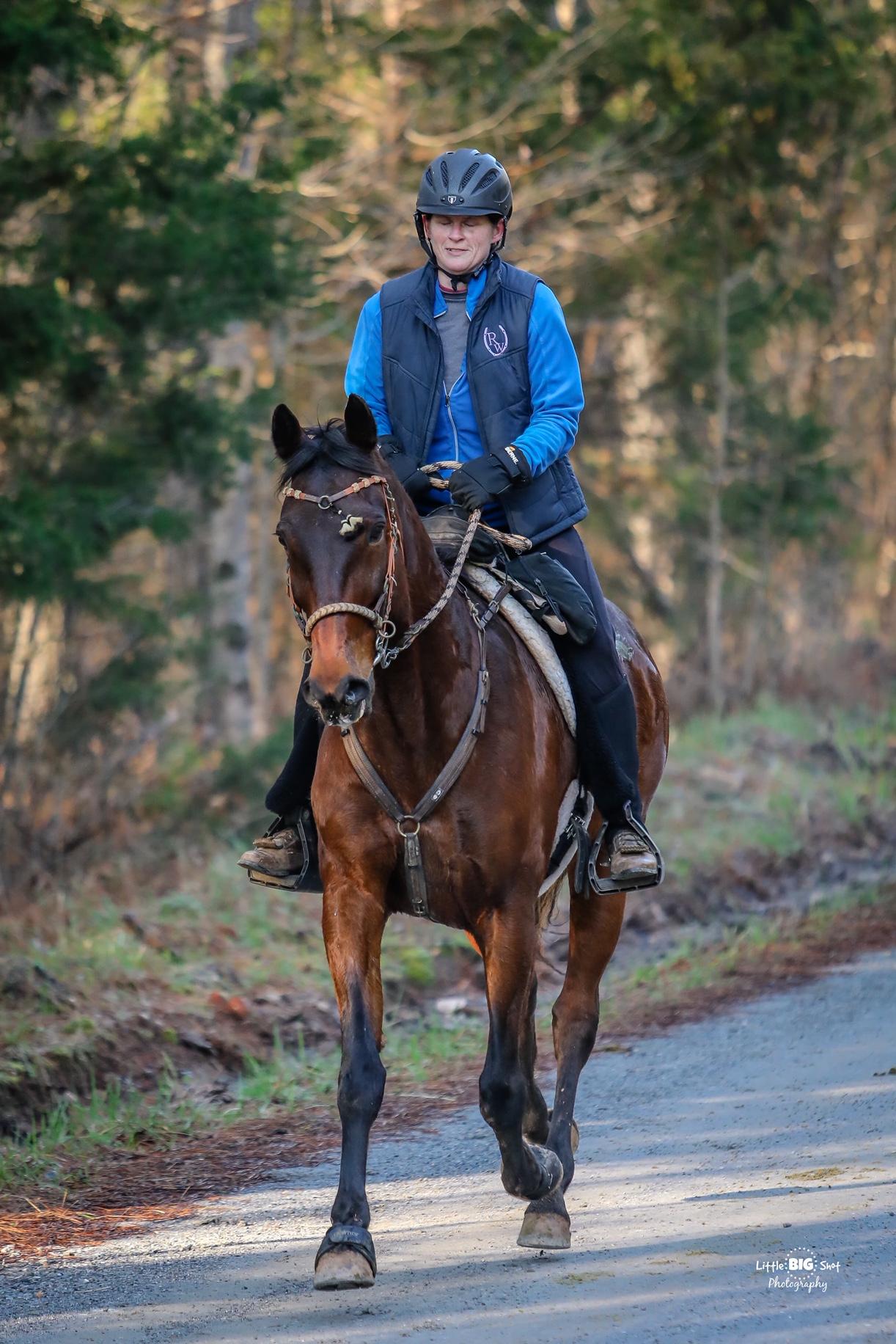 Before getting involved in endurance riding, Patricia had been involved in speed racking. And it was when she was working with speed racking horses that she started being interested in Standardbreds. Just before Patricia found Eli, she had adopted a Standardbred mare, but the mare was a poor fit for endurance riding because she was an aggressive kicker and preferred arena work to the great outdoors. When Patricia saw a video clip on YouTube of Eli under saddle, she knew that she had to have him. She emailed Dot Morgan, the director of New Vocations and Eli was Patricia’s within four hours of his being put up for adoption. When Patricia adopted Eli he was four years old, and had been a rather unsuccessful pacer with only one win on the track and less than $7,000 in earnings. 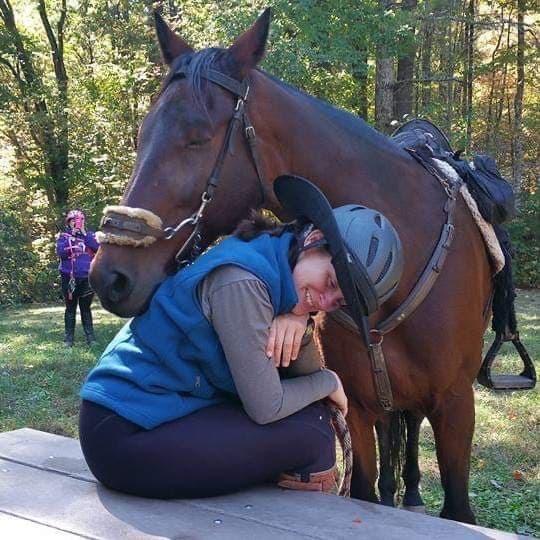 Patricia was attracted by Eli’s regal air and athleticism and said that those are attributes she looks for in an endurance prospect. During their first year on the endurance circuit, Patricia says she got a lot of quizzical looks from people who would ask, “What kind of a horse is that?” But she knew that Eli was the right choice for her. When asked why she would choose to ride a Standardbred over a gaited horse or an Arabian, Patricia said that she really loves the intelligence, power and work ethic of a Standardbred. They are bred to be athletic and it shows in the sheer power, durability and performance of a Standardbred horse. 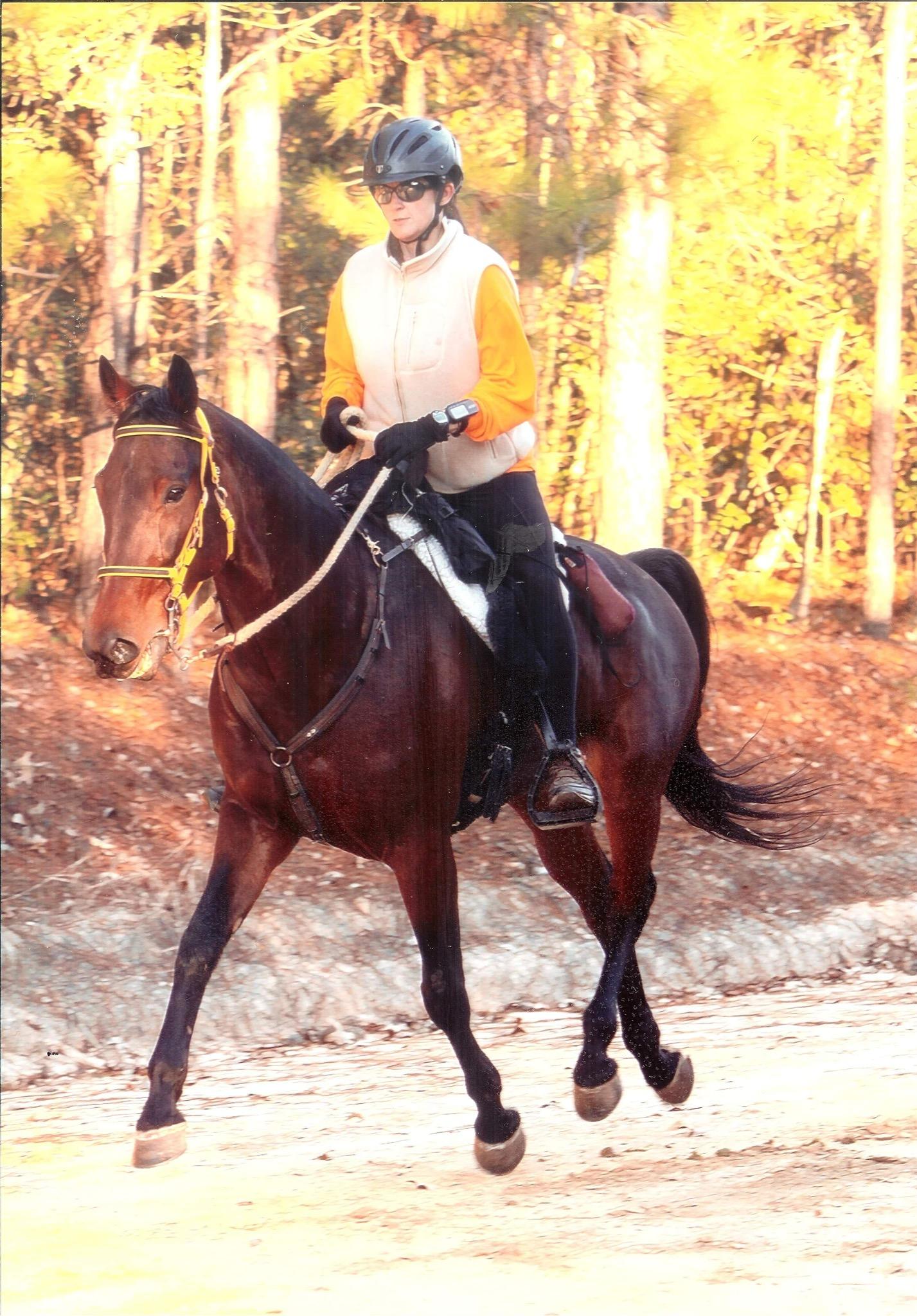 Patricia’s advice for anyone considering a Standardbred as an endurance horse is to ride several Standardbreds before deciding on one. As with any breed, Standardbreds can vary greatly from one horse to another and can be as dissimilar from one another as snowflakes. Some Standardbreds are comfortable to ride whereas others are rough rides and can be very bouncy. Eli was a pacer on the track but actually prefers to trot under saddle. Patricia says she loves his big power trot but that many people have a hard time keeping up with him. 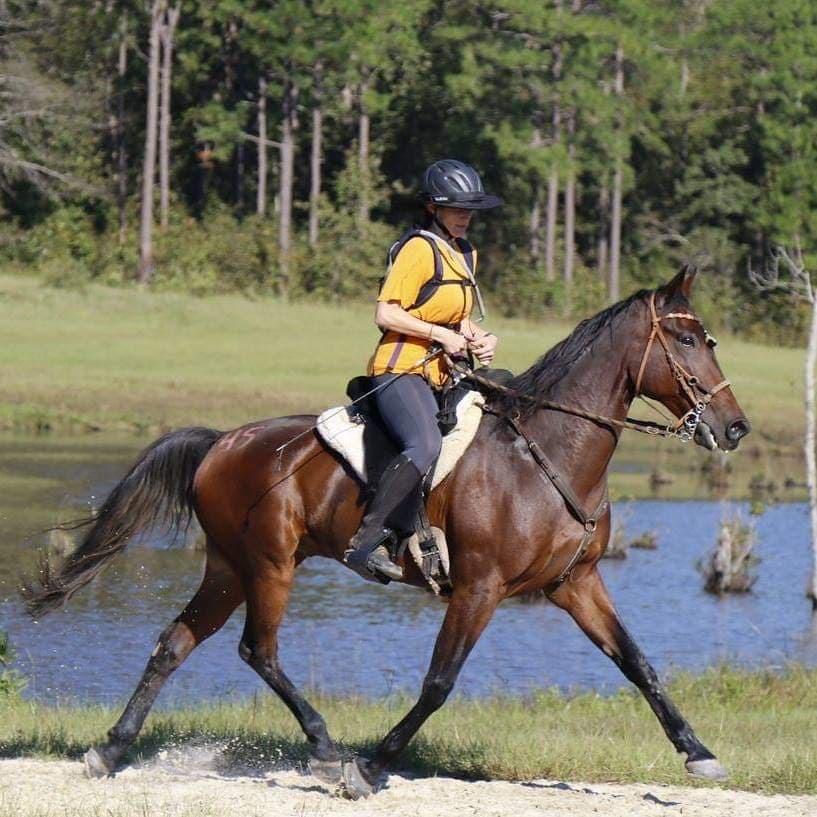 Patricia is proud of how far Eli has come over the past 10 years. She says his feet are still a struggle, as he has under-run heels, so she has to shoe him frequently to make sure his toe does not get too long. She considers their greatest achievement as a team to be finishing the 75 mile ride at Yellowhammer. It is hard for a thicker muscled horse, like a non-Arabian, to compete well at a longer distance ride and Eli completed the 75 mile ride with enthusiasm and gas left in the tank. 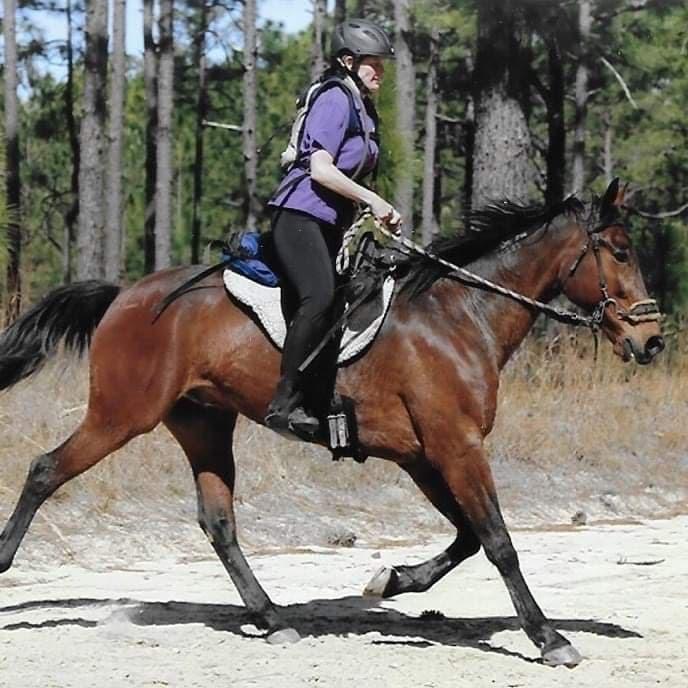 After 10 years of competing together, and achieving many milestones that had previously been unknown to Standardbred horses, Eli and Patricia are still going strong and still enjoying the ride. 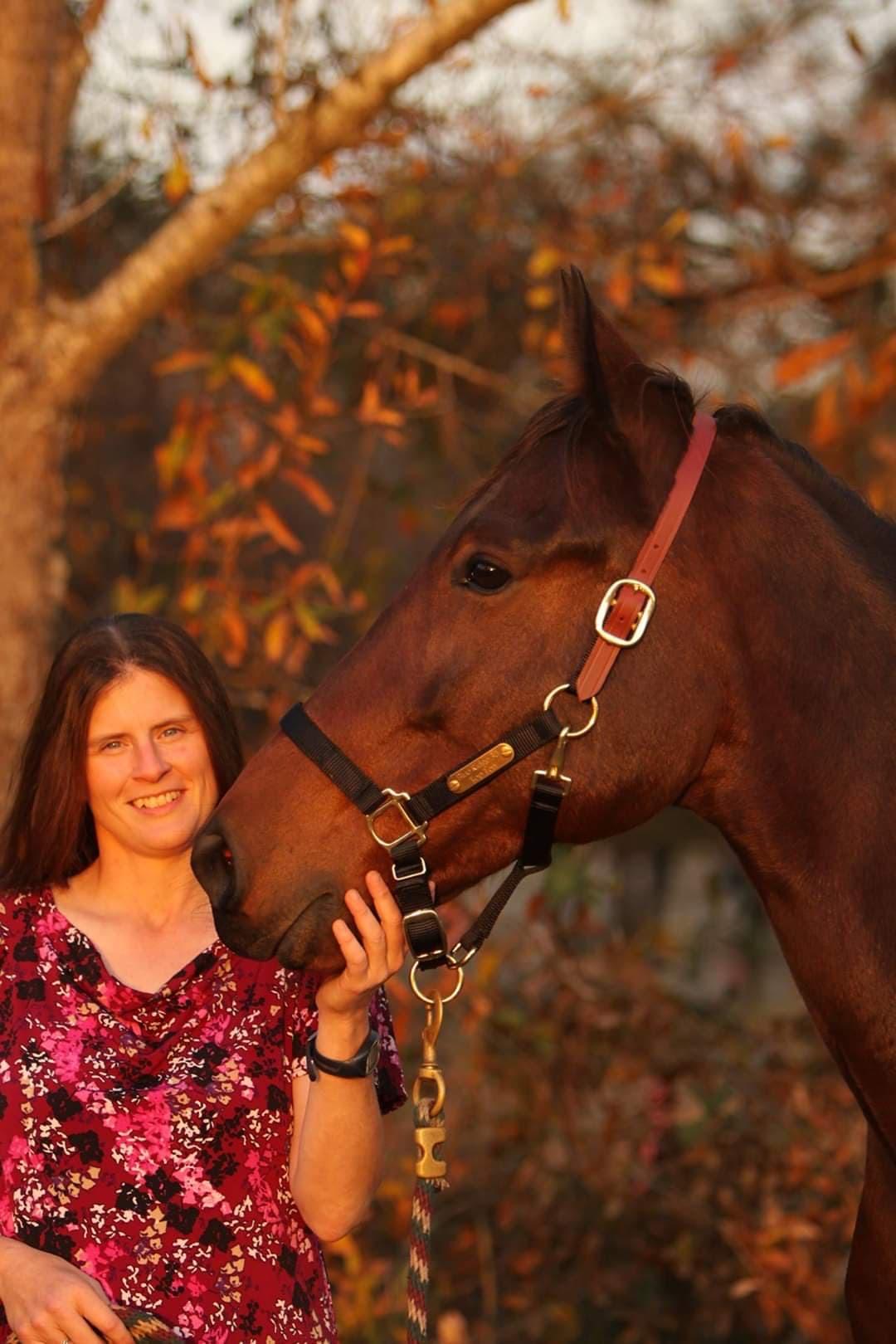