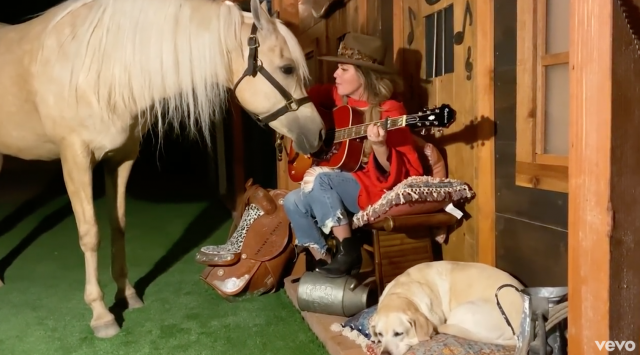 This video of Shania Twain singing to her horse is all you need today.

The Academy of Country Music Awards were originally supposed to air on CBS on April 5th, but due to COVID-19 they have been postponed to September 16th. However, CBS and the ACM weren’t going to leave their fans hanging. Instead, they aired ACM Presents: Our Country, a two-hour special that featured country stars singing from their own homes. Although many stars performed, there were two who really stole the show: Shania Twain and her horse.

Twain sang portions of “Honey, I’m Home” and “Man! I Feel Like A Woman!” acoustic to her adoring Palomino while her yellow Labrador snoozed beside her. And horse-lovers the world over swooned.

We don’t think it matters whether or not you’re a fan of country music or whether or not you ride western. Seeing Shania sing while her horse stands patiently, occasionally nuzzles her and finally licks and chews is exactly we need right now.

If you only watch one thing today, we hope it’s this.