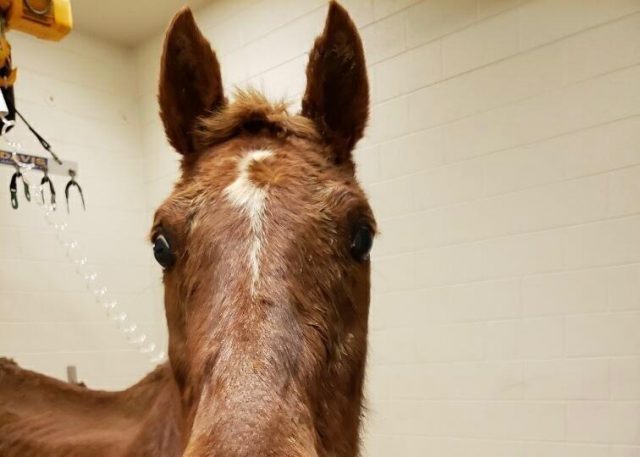 “… my herd has been at full capacity for some time now. So a few days ago, when my cell phone rang, I was caught completely off-guard as I heard the voice of the sheriff’s animal control officer say, ‘There’s this horse . . .'”

“I do not need another horse!” This is a universal chorus amongst us horsefolk, and we sing it often and loudly — typically as we’re en route to go inspect a new prospect, based on some version of, “There was just something special about this particular horse . . .”

More likely than not, we rework our budgets, schedules, turnout combinations and supplement cabinets to accommodate the new member of our equine family.

I myself have rescued, rehabbed and rehomed horses several times. I run a 501(c)(3) nonprofit on my farm specifically to help one slaughter-bound horse at a time get their “starfish” moment.  A couple of members of my own herd are rescues that I’ve never felt comfortable rehoming; some animals have just been through too much to ask them to adapt to yet another new environment.

But my herd has been at full capacity for some time now. So a few days ago, when my cell phone rang, I was caught completely off-guard as I heard the voice of the sheriff’s animal control officer say, “There’s this horse . . .”

The animal control officer was on location with a horrible abuse and neglect situation. All horses were being surrendered. Those animals that could still stand were being taken by another local rescue organization.

“But there’s this horse . . . he’s down, I’ve called every other local rescue, and nobody will take him. Will you give him a chance?”

A field unit from the University of Tennessee College of Veterinary Medicine (UTCVM) was there on scene, as well.

“Let me speak with the vet.”

Soon a familiar and trusted voice was giving me details of the situation. “Esther, he’s down and can’t get up, but he’s trying so hard! He wants to live so badly! His body score is a 1 and he’s a mess, and nobody else will even try. You’re my last option and if you can’t help, I’ll have to put him down. I just hate to kill an animal just because he’s hungry.”

Because there are charges pending against the owner, I can’t share the on-scene photos here. Yet.

But I can tell you the horse was lying in a putrid mix of deep mud and his own urine and feces. Despite being pulled out of that cesspool onto firmer ground, he never could stand up. The vet and on-scene officers literally dragged him onto a trailer and he rode to the vet hospital lying down, unable to rise. Here is a photo of “Regal” upon his arrival at UTCVM. 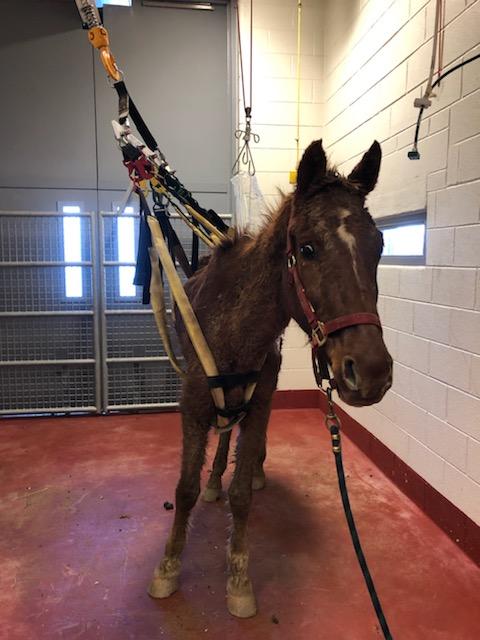 “Regal” within moments of his arrival at UTCVM. Photo provided by UTCVM.

This, my friends, is a 20-year-old American Quarter Horse. Regal (I chose that name because it sounds very similar to his lifelong name, yet is far more inspiring than his original name) stands 15 hands high and should weigh between 1,000-1,200 pounds. Regal’s intake weight was 629 pounds. 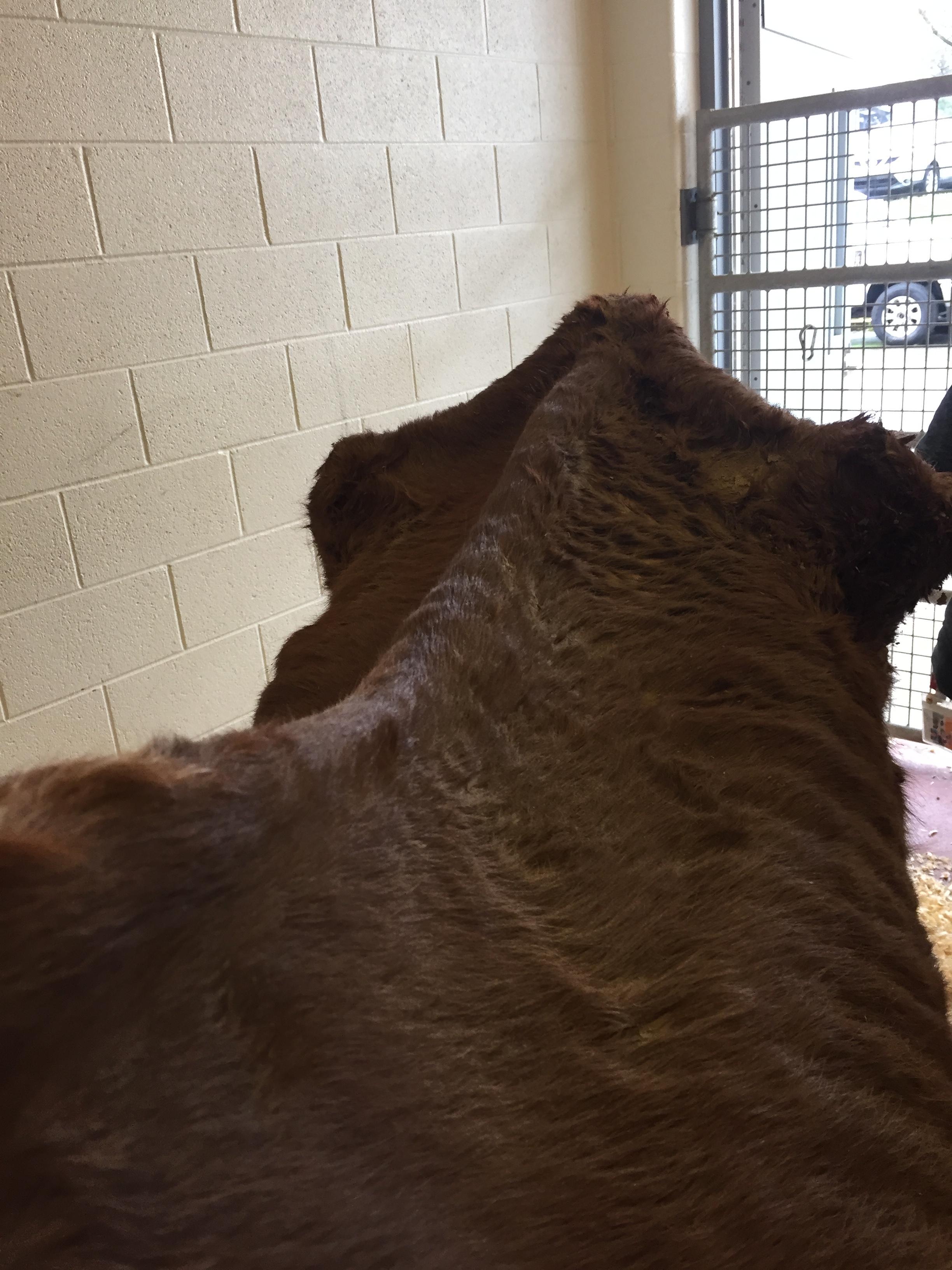 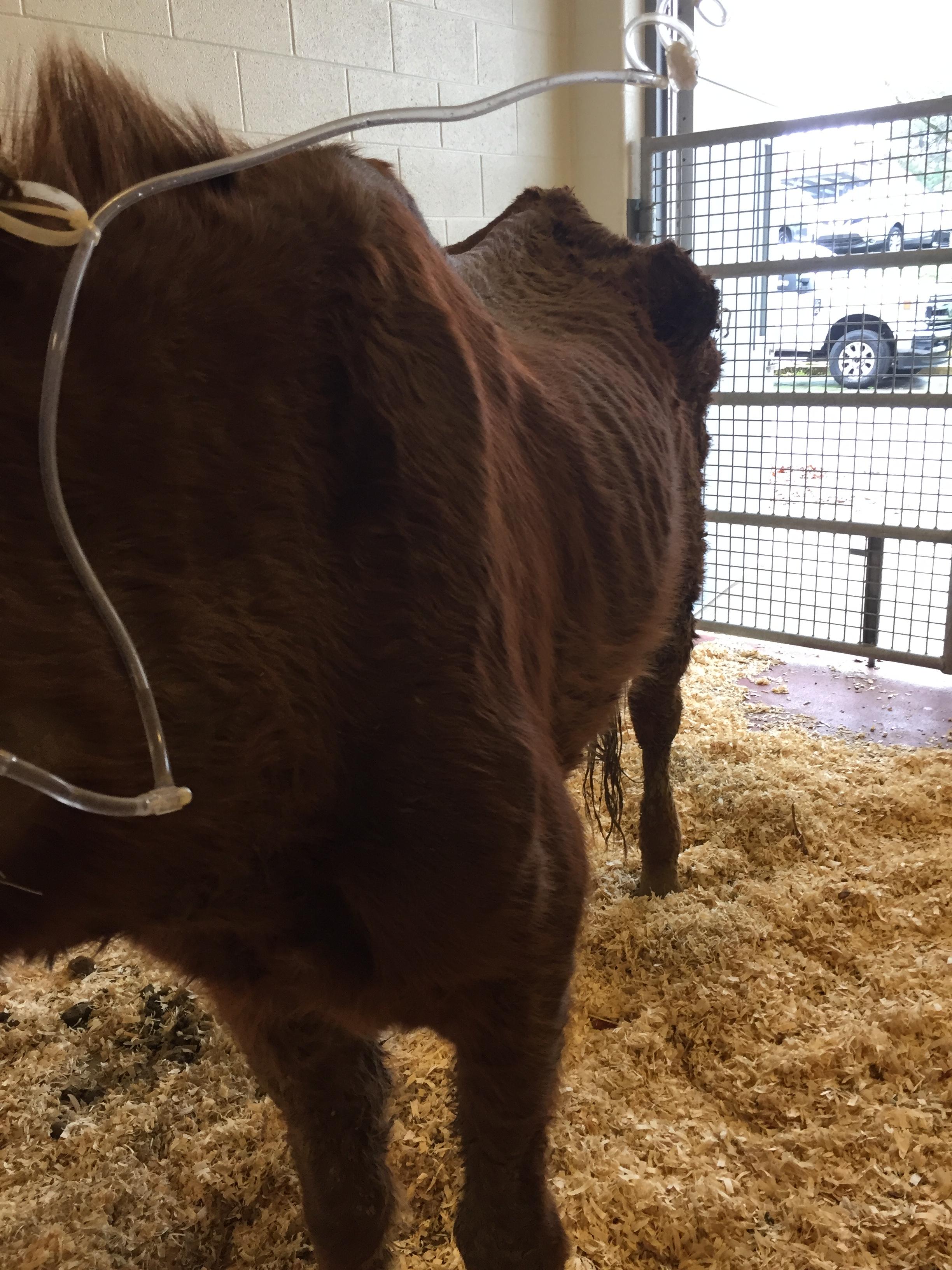 Intake photos of Regal at 630 pounds. Photos provided by UTCVM.

Every rational brain cell I had told me to decline to help and tell the vet to put the poor horse down. I told myself, “He’s too old, too thin and the rehab bill would be much, much too high.” He had been lying down so long he had facial paralysis and an ulcer on one eye. His forelegs, at present, rotate outward because his elbows can almost literally touch. Who knows if they will self-correct over time with adequate groceries? By every medical expectation, the horse should be dead anyway.

And yet, there was something about this horse . . . 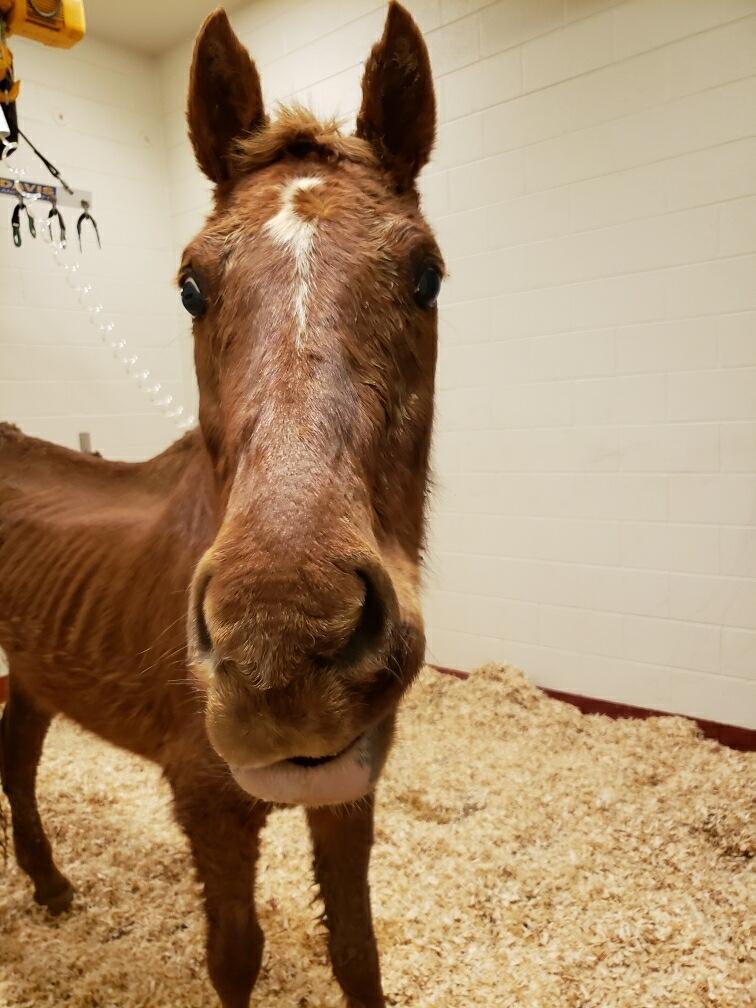 Regal, Rehabilitation Day 4 and he can stand without the Davis sling.

Sadly, I have seen horses this starved before. Typically, by the time they get this emaciated, their gaze is dull and inward as their very life force has dwindled to the faintest of embers.

But this horse was different. Regal had a bright spark of life in his eye, despite being literally skin on bone. He was alert and interested in his surroundings, friendly and cordial, and understandably eager for food. UTCVM began a slow and careful refeeding regimen to avoid a metabolic “crash” as Regal’s body re-accustomed itself to food.

By Day 5, the ulcer in his eye had healed.

By Day 7, he enjoyed a warm bath under heat lamps at the vet school. At last, all the encrusted remnants of his prior living conditions were washed away. His tail became less of a “log” of muck and snarls and more like a sorrel cascade. 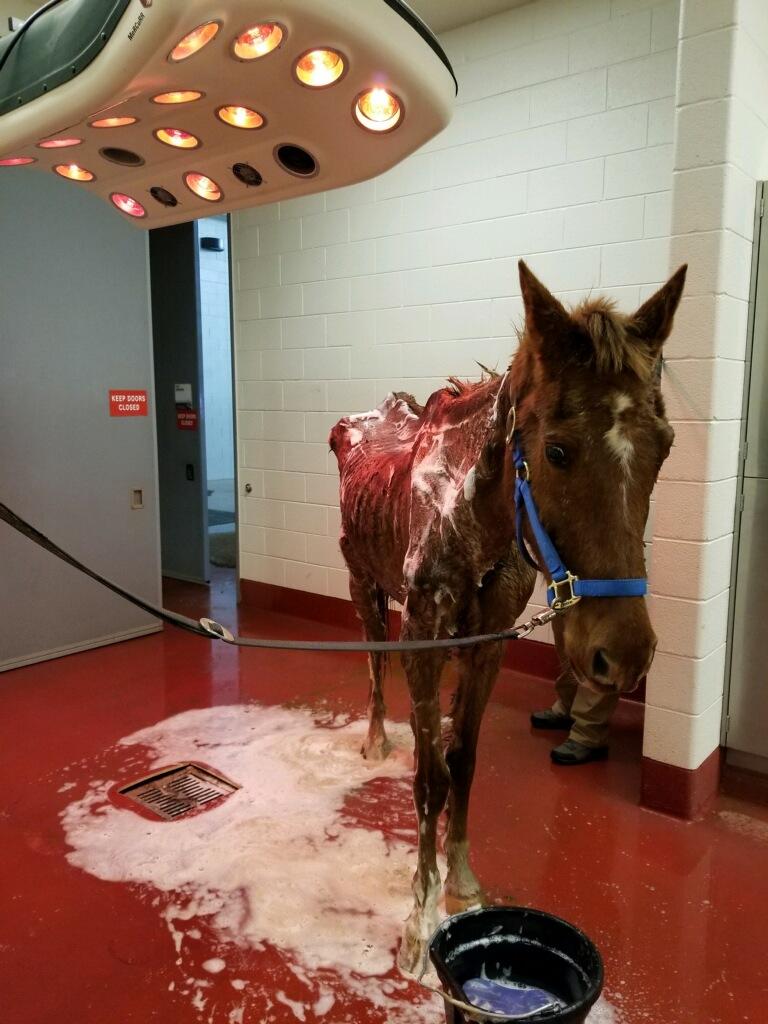 Day 7. Regal can stand on his own well enough to get a bath under heat lamps. Photo provided by UTCVM.

As his biochemistry has stabilized, Regal has been given more to eat each day. He is clean and warm and cared for, and getting stronger every day. Regal is still unable to rise on his own, so he remains at UTCVM in a stall with a sling for when he needs it. 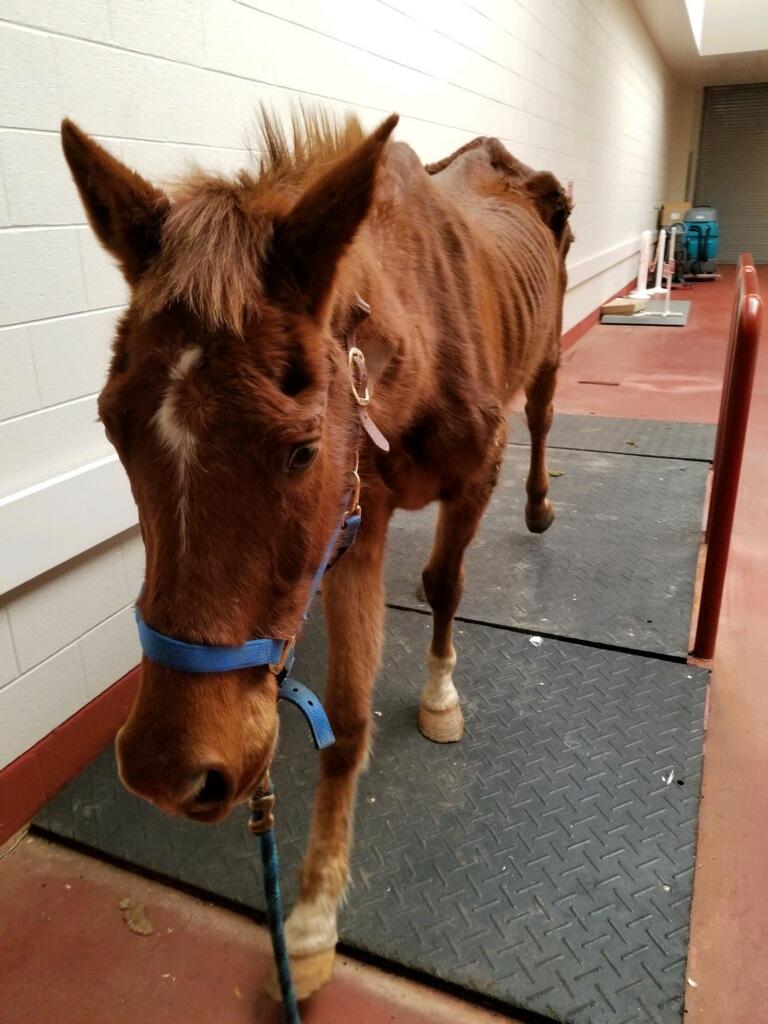 Day 10. Regal weighed in at 679 pounds today, a gain of 50 pounds from his intake weight. Photo provided by UTCVM.

During these days of global pandemic pandemonium, I thought HorseNation readers might find a little hope and inspiration as I chronicle Regal’s recovery here. Yes, it’s “only a horse” — and an old, unwanted, emaciated one, at that.  And yet, perhaps now more than ever, every life matters.

If you’d like to support Regal in his rehab journey, you can visit our Facebook page or donate directly via PayPal at [email protected]. Starlight Farm Animal Sanctuary is an IRS 501(c)(3) nonprofit that is platinum-certified on GuideStar. SFAS is run entirely by volunteers, so 100% of every dollar donated goes directly to supporting the horses in our care.