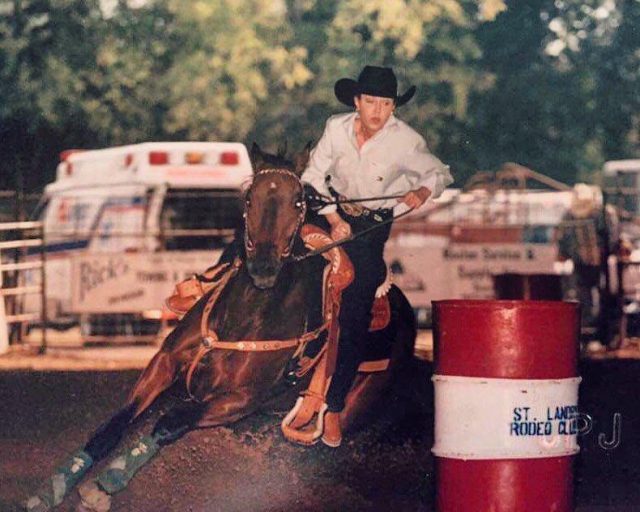 “These tapes were mostly of my high school rodeos — they were the long-lost and forgotten videos of my first ‘real’ barrel racing horse. The one to whom really I attribute everything.” Most of us can look back at the horse that taught us the most and turned us into the horse people we are today. Casey French talks about hers.

Last week I made an unplanned visit back to Louisiana. During my stay there I came across a painted box full of “tiny tapes” from the late 90s and early 00s. I hadn’t watched any of these videos since they were put into this box two decades prior — mainly because the VCR hasn’t been a household item of mine in quite some time! You see these “tiny tapes “ had to be put into a larger tape that then would fit into the VCR for viewing, unless you had one of those ancient video cameras that it was designed to be recorded from, that is.

Once I arrived back in Tennessee, and in the midst of Coronavirus social distancing, I had some time on my hands.

I could not wait to take a walk down memory lane by playing these tapes on the VCR I scored from a relative in Louisiana. These tapes were mostly of my high school rodeos — they were the long-lost and forgotten videos of my first “real” barrel racing horse. The one to whom really I attribute everything.

She was a small Thoroughbred mare, better known as Dorothy.

Dorothy was a horse that we purchased after a very long search of looking for “the one.”

We made the trip from Baton Rouge to Fort Worth one hot July weekend and made the decision on her purchase after a spur-of-the-moment run at the historic stockyards rodeo. The time we ran that night, our first trip ever, was on par to qualify to the American Semi-Finals Performances even today.

After that one run I knew she was the horse for me. After a lengthy process, finally she was brought home to St. Amant, Louisiana, where we would try to achieve goals, which included qualifying to the High School National Finals rodeo.

At the age of 16, I had this new fancy barrel horse that had proven herself. All the tools were in the bag, I just had to hang on — not so hard to do right?

You see, though I had ridden some nice horses, I went from a Lexus to a Lamborghini! And watching these videos 20 years later made it all come back so clearly.

These days I have a very strict policy about bad runs — I watch them only once and I delete them. Sometimes I don’t watch them at all. At this point I know what happened, no need to pour salt in the wound by watching over and over again. As Trevor Brazile says, “Best thing you can have in rodeo is a short-term memory.”

Well back then, unless you taped over these runs, there was no delete button. So when trying to find the good runs, I also had to watch all the bad! It was pretty painful to say the least. But I watched our progression and thought about what that was like. The uncertainty, the pressure of knowing that you’re expected to win but you can’t immediately put the pieces together to do so. It was like riding a wave, sometimes I was able to hold it together for that 16 seconds only for the next wave to come around and we would crash and burn.

As I watched I thought about how differently I would’ve handled things now versus what I did back then. I think about how much further I could’ve gone, all the woulda, coulda, shouldas.

But the fact is, if I had not gone through what I did with her then, there’s no way I could tell you what I should’ve done.

Without her there’s no way I now would know any better.

She was the horse that built me.