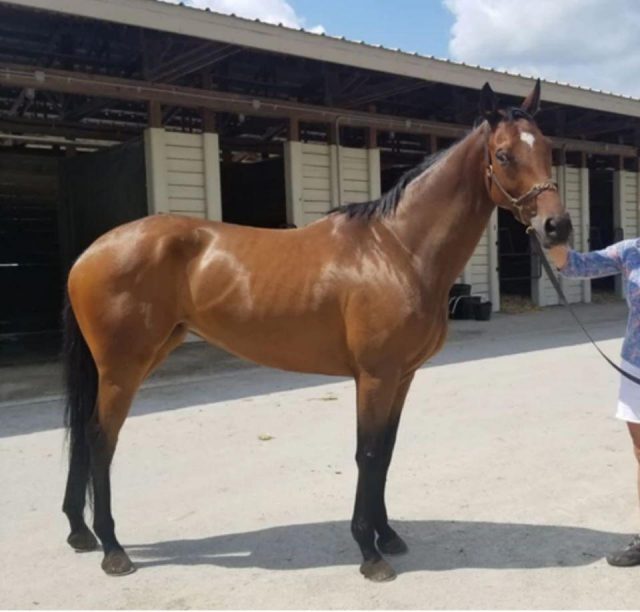 “Hypothetically, if I were to get together with an older warhorse mare (raced 50+ times) with my older warhorse self (50+ yrs old) would y’all sponsor me…” And that’s how it all began for Jen and Louise, two warhorses headed to the 2020 Makeover.

For 616 accepted trainers, the journey to the Retired Racehorse Project‘s 2020 Thoroughbred Makeover and National Symposium, presented by Thoroughbred Charities of America, has begun! Over the next eight months, four of those trainers will blog their journeys, including their triumphs and their heartbreaks, successes and failures, for Horse Nation readers. Today, meet blogger Jen Cleere.

“Hypothetically, if I were to get together with an older warhorse mare (raced 50+ times) with my older warhorse self (50+ yrs old) would y’all sponsor me to buy her off the track and take her to next year’s Retired Racehorse Project competition? I did mention that this is all hypothetical, of course. . .”

The post was accompanied by a photo of a shiny bay mare with a heartish star in a typical track sale photo. She has big ankles and her head cocked toward the camera with a curious eye. 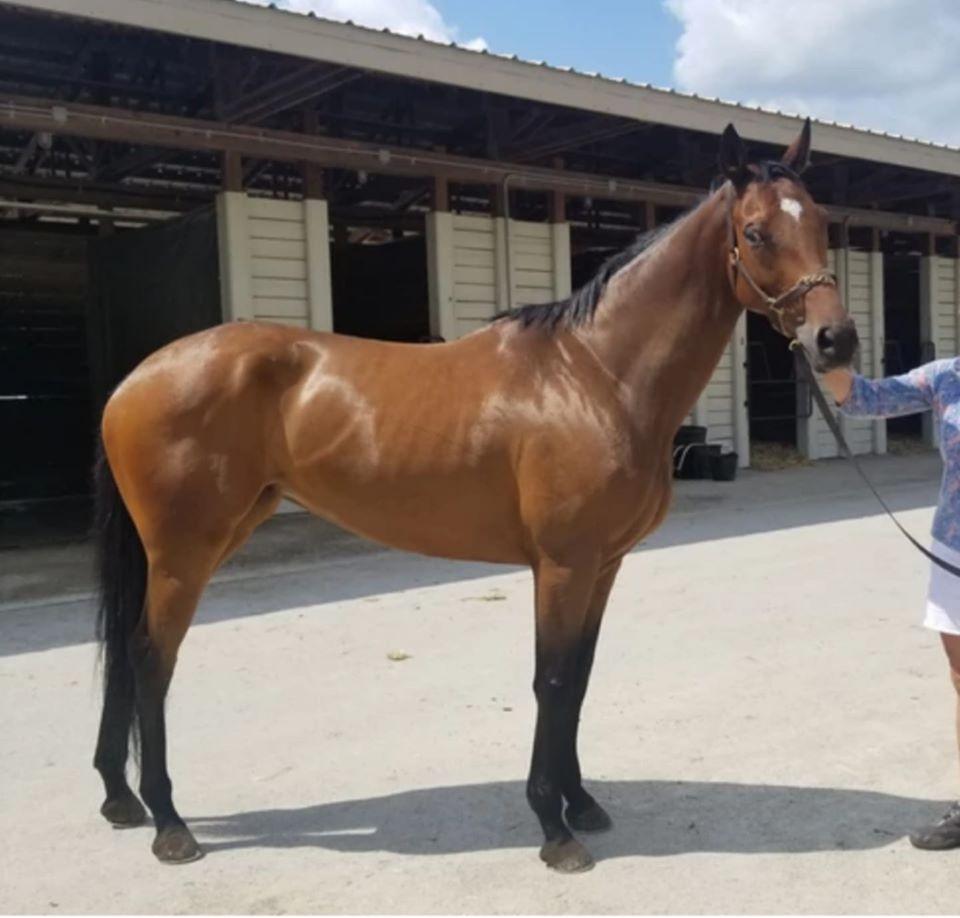 Here is Sweet Hall in her track sale photo. Photo by Amy Paulus.

I’m looking out the window at her in the pasture as I write this, and Sweet Hall, aka Louise, is in her borrowed purple plaid blanket grazing with her Arabian bff Wren & their mini advisor, Butternut. Yep, that facebook post went nuts on my page — friends started sending money that night and one week later, I was walking my very own (very fresh!) retiree down our Prize Turnip Ranch driveway.

Now, y’all, I am an amateur rider. I do some endurance riding, some fox hunting, I have done a little showing as an adult. I live on a horse farm with my wife, Kelly, who happens to be the-best-horse-trainer-you’ve-never-heard-of and she is a stellar instructor of horsey humans as well. In my years with Kelly, she has helped me go from a literal floppy-ass mess to a much more solid and presentable rider. She has replaced the emergency ‘STOP WHOA STOP STOP’ tape in my head with ‘move forward through trouble, you’re always going to be safer going forward, keep your leg on and don’t forget that you can ride’. Oh, and she had me raise my stirrups about seven holes and switch to full seat breeches from tights. 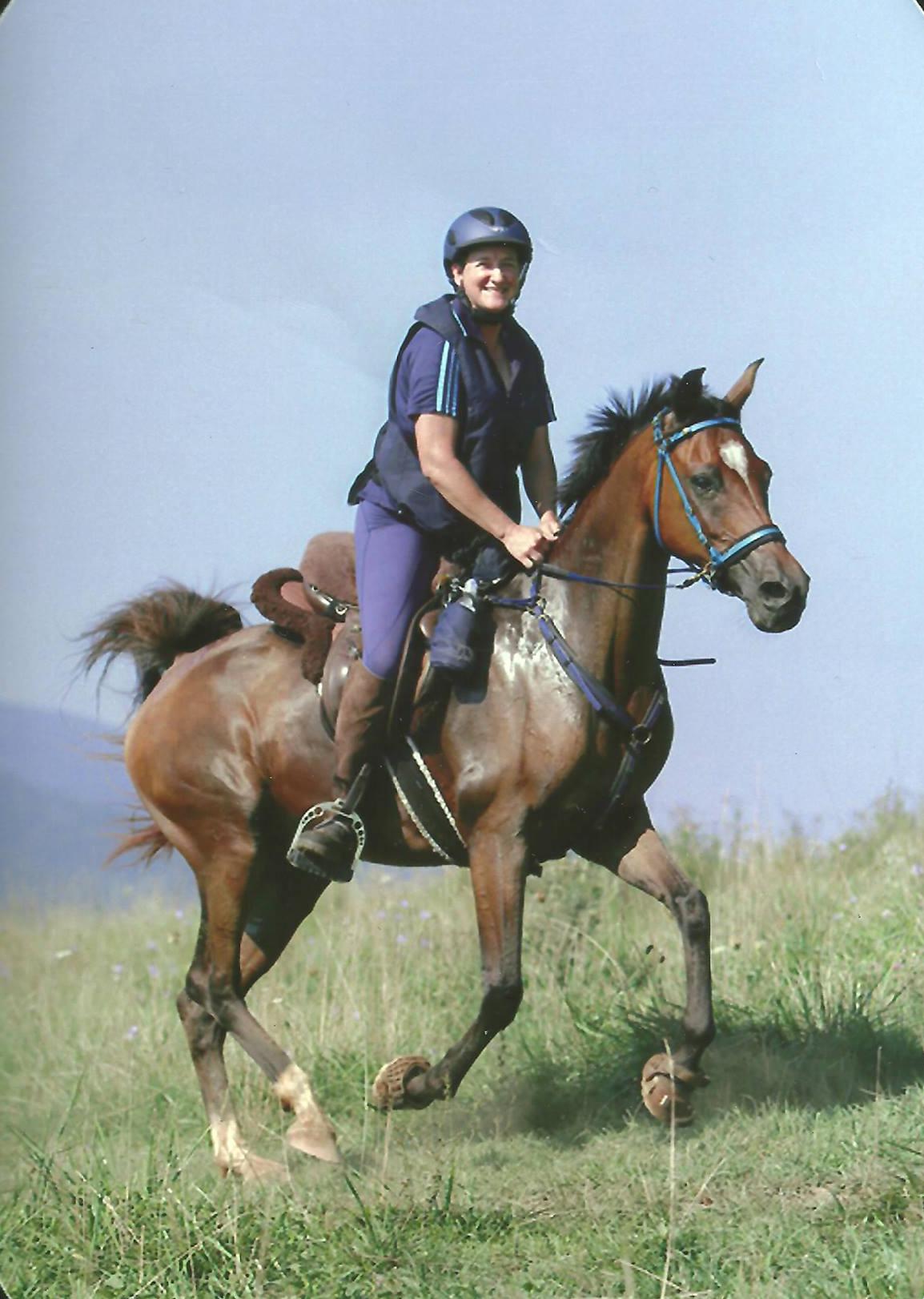 Kelly also inspired me to stop complaining while riding — I remember fondly that first 50-mile endurance ride we competed in together during which I made zero complaints. She asked me at the end if I was okay, as it worried her a bit that I had not mentioned anything wrong. (Note that I said stop complaining, not crying, I still cry a good bit on horseback — silently, of course.) 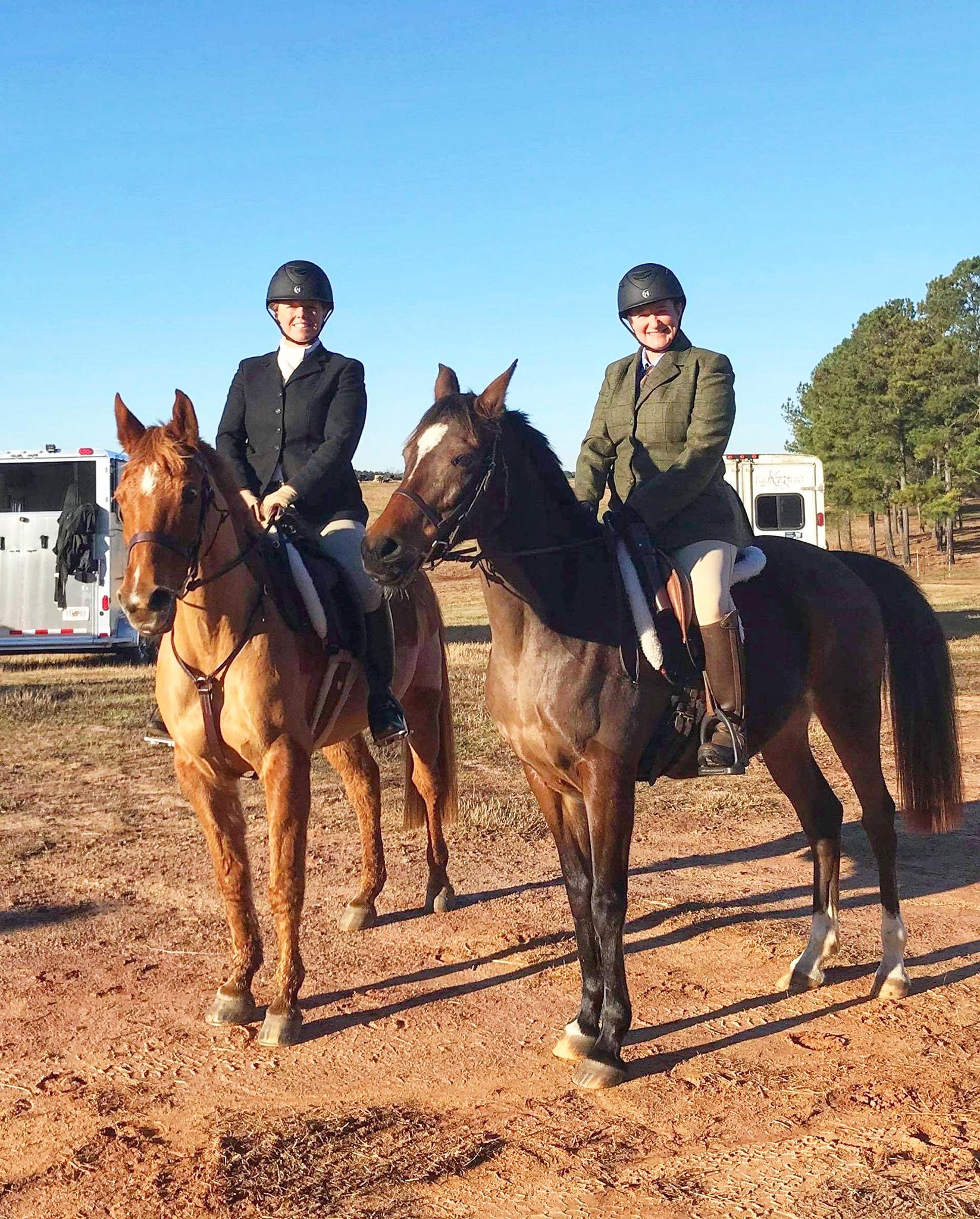 I was the groom and top fan for Kelly through her 2019 Retired Racehorse Project Thoroughbred Makeover journey, from horse selection, through all the training rides, shows and then in Kentucky. I may have put a little pressure on her to enter the Makeover in the first place, and yes, I sent her endless sale ads until she finally said, half-committed, “I like that one, he’s got a good walk.” And via the magic of Paypal, we became owners of our first straight-off-the-track fireball: R Double Trouble. Trouble became Wilbur, because of his slightly piggy face, and who the heck wants a horse named Trouble? Despite the change, he lived up to his JC name, with harrowing hoof issues (we should have bought Gorilla Tape stock), near constant injuries and minor rehabs throughout their Makeover journey. 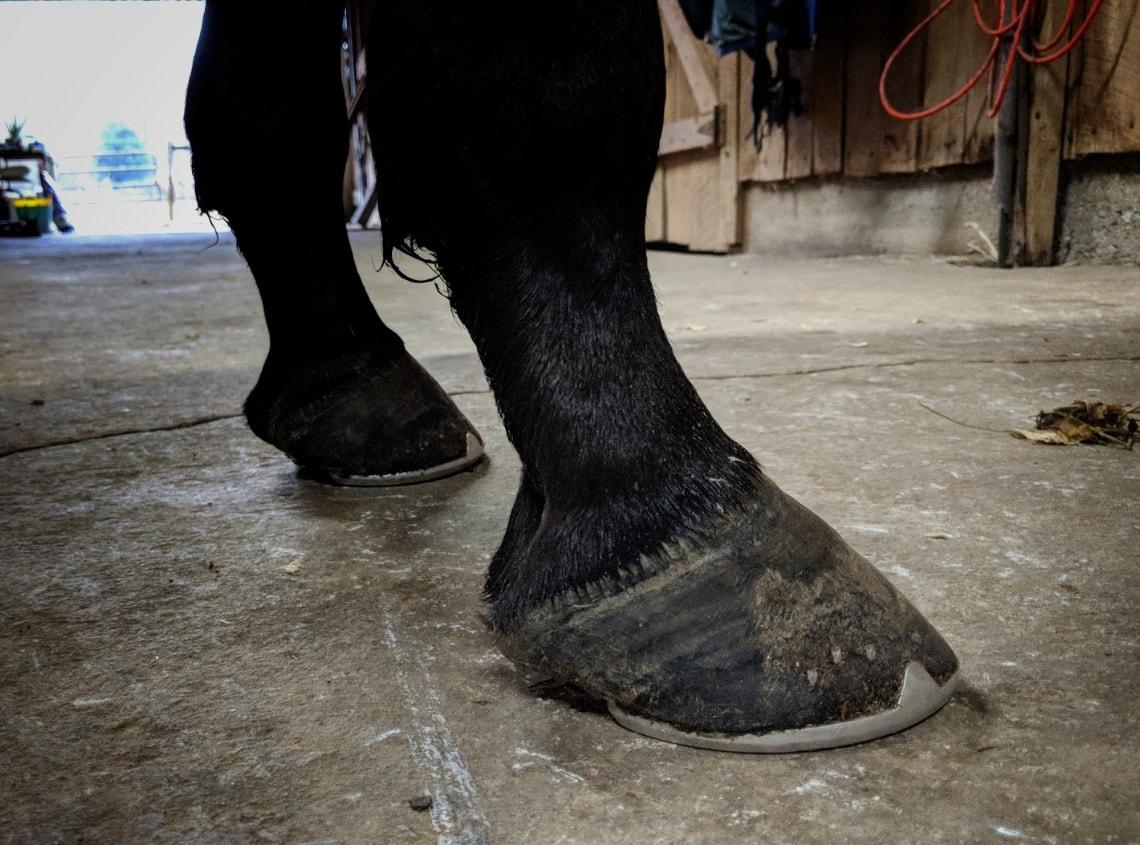 Wilbur’s fronts, one week after his last race. Photo by Kelly Burns.

Now I love Wilbur, and I have held the end of his rope and played lip lip games with him to distract him while he was treated for this and that. I watched him go from a baby wild thing who couldn’t get over a ground pole to a handsome beast who we thought just might be a real contender in dressage in Kentucky. Put a saltshaker on that, I will tell you just how that went at a later date. But nothing about Wilbur made me think that I could or would even want to do the Makeover — he is just, well, not my type and far beyond my skillset.

Somehow along the way, looking at you, Facebook, I started learning about warhorses. And I just flat out fell in love with them. To me they have this palpable nobility, and earnings aside, racing 50 plus times and retiring with new career prospects certainly is winning, no matter the race record! By the end of that week in Kentucky, I was at Amy Paulus’ trailer in the campground, with a BBQ rib in one hand and a margarita in the other, and to my utter shock, found myself saying to her, “I’m not a trainer, but if I did the RRP, I’d want a warhorse mare, a short one, maybe she would have an ugly foot or old injury that would make her adoption prospects slimmer, oh and she would need to be quiet. And cheap. And have great hooves. Actually I would want a grandma-type horse. I mean it, I can’t handle some young pumped up dragon — I need a deadhead. Let me know if you come across one like that.”

Y’all, I said this to Amy Paulus, owner of Changing Saddles, who personally places 500-600 retiring racehorses per year — of course she was going to find my grandma horse. Amy sent links to three horses the day after we got home from Kentucky, one of which was Sweet Hall, who had run her last race less than two weeks before. 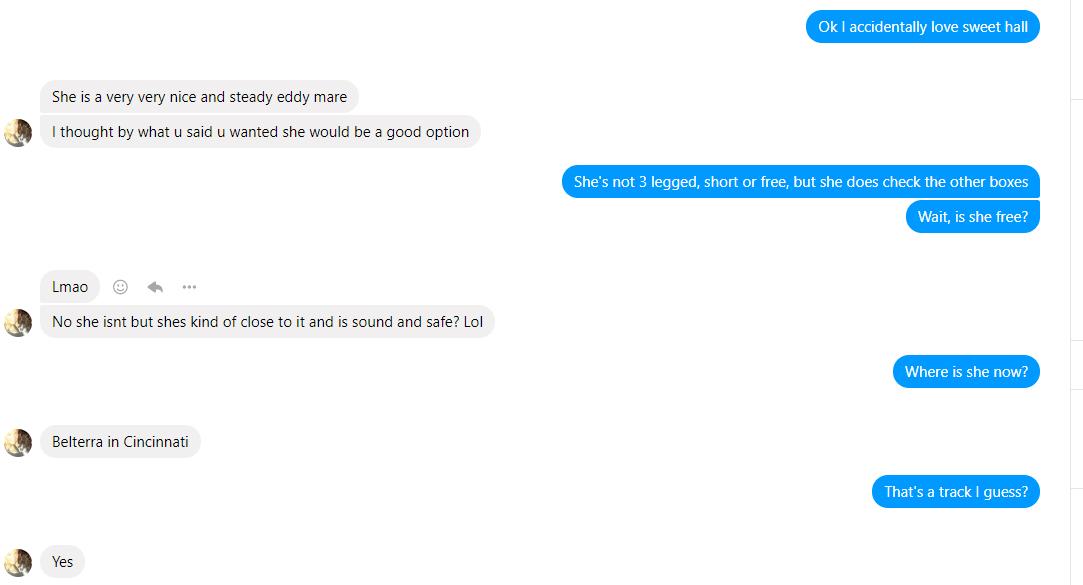 Screenshot of conversation between Jen and Amy. Photo by Jen Cleere.

So, as you now know, Louise has been here since October, so let’s fast forward to your burning question — is she a grandma horse? That, my friends, all depends on your grandma and her riding ability. I did sit on her, with my inflatable vest locked down, in the roundpen for a quick ride shortly after she arrived and we both survived a little walk and trot. 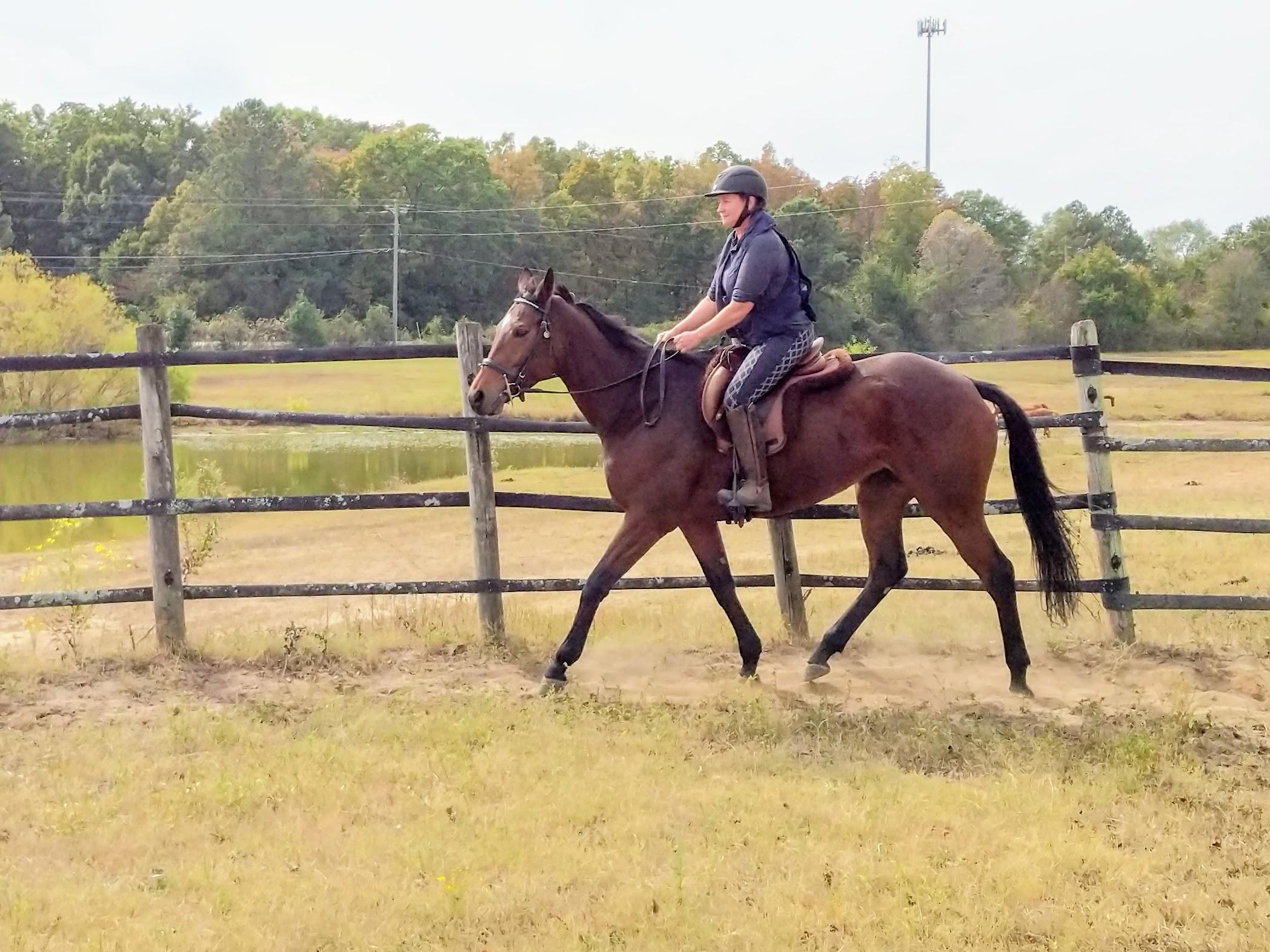 Pure terror, plus the delight of actually riding my racehorse! Photo by Kelly Burns.

Then, as is the fashion for OTTBs, she flung her race plates off one by one, got lamer by the minute and was very footsore for a couple of months. I glued Renegade Boots on her fronts for one cycle just to get her pasture sound. When I casually say that I glued boots on, please know that it took me the better part of an entire Saturday and involved a power sander, heat gun, scary stomping and very loud cursing. Before that was the runaway day, when I was a little too casual about the gate during her turnout and got to see Louise in true race form — straight down the driveway and right out into the road. Quick acting Kelly was in the middle of a workout in the arena and charged after her on trusty Roy as I grabbed a useless bucket of feed and the car keys. We met up at a neighbor’s place where Louise had doubled back and was prancing in full snort by their mare pasture. After I slid the halter on with shaky hands, Kelly and Roy calmly ponied her home like they chase down errant racehorses every day. 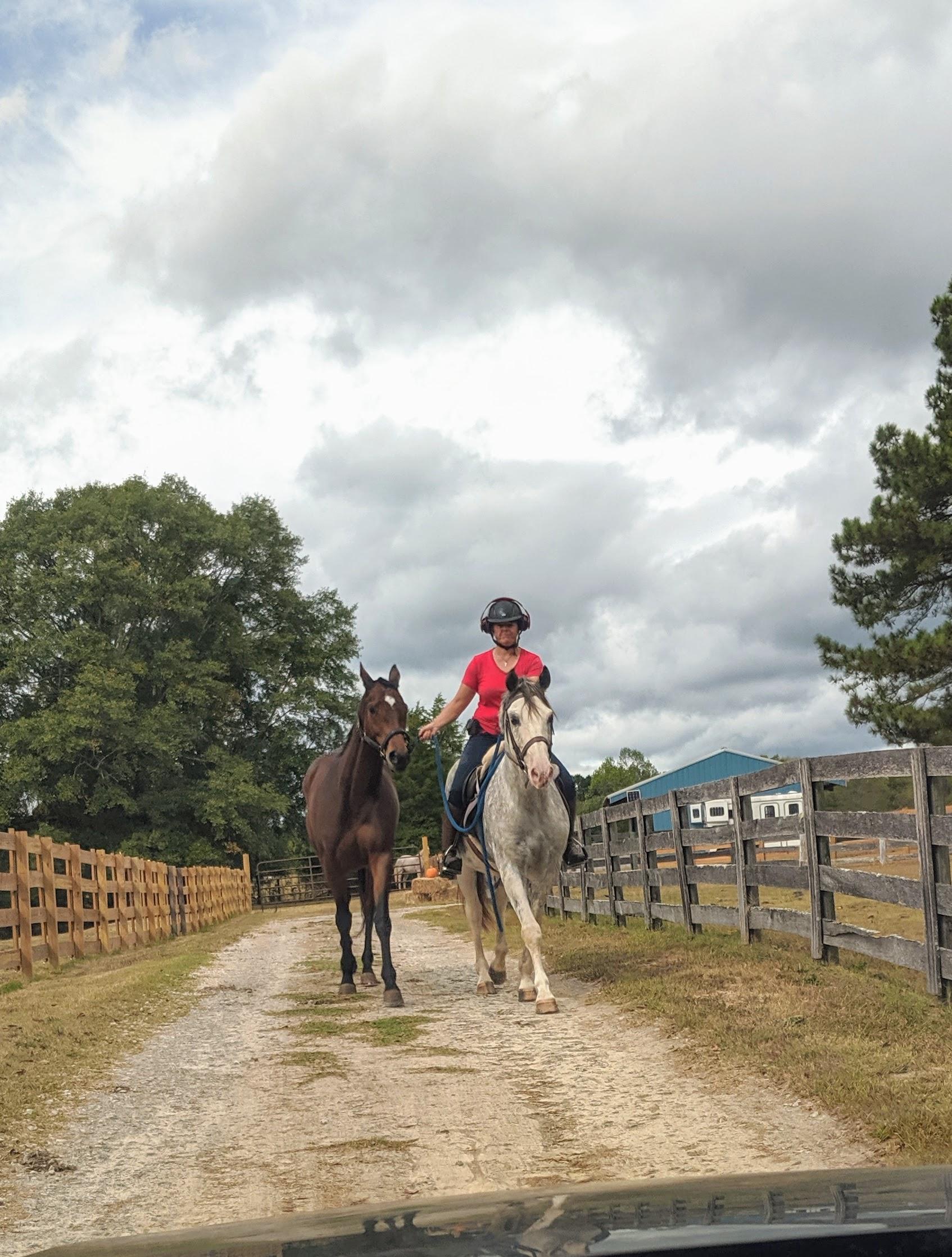 Louise, Kelly and Roy. In my defense, I am great in emergencies that do not involve galloping. Photo by Jen Cleere.

So, yeah, Louise and I were off to quite a start together and aside from actually starting, training and riding, I still had to submit my application (and be accepted!) to the Makeover.

Jen C. Cleere is a metal artist whose studio overlooks the pasture at Prize Turnip Ranch, a farm she owns with wife Kelly Burns, professional horse trainer and private eye. Jen makes keepsake and memorial jewelry and ID tags (for horses, dogs and humans, oh my!). She keeps Alpine dairy goats, loves cheesemaking, gardening and all of the homesteady aspects of farm life. Since 2005 she’s been an Eponaquest Equine Facilitated Learning Practitioner. Find her jewelry on Facebook and Instagram @byandbyart. And you can order tags from www.fetchingtags.net!