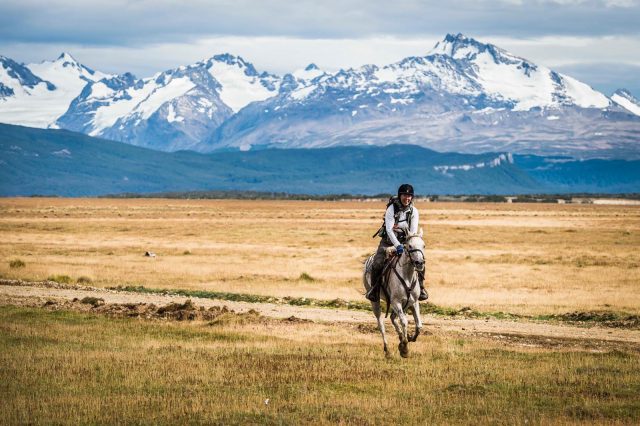 Marie Griffis is crowned the winner of the “greatest test of horsemanship and wilderness skills on earth,” the Gaucho Derby.

Imagine yourself thundering deep into the wilds of Patagonia on horseback. You’ve got your steed underneath you and a pack horse by your side. You’re navigating across some of the wildest terrain on Earth attempting to win one of the toughest and most unusual equine challenges in history…this is the Gaucho Derby 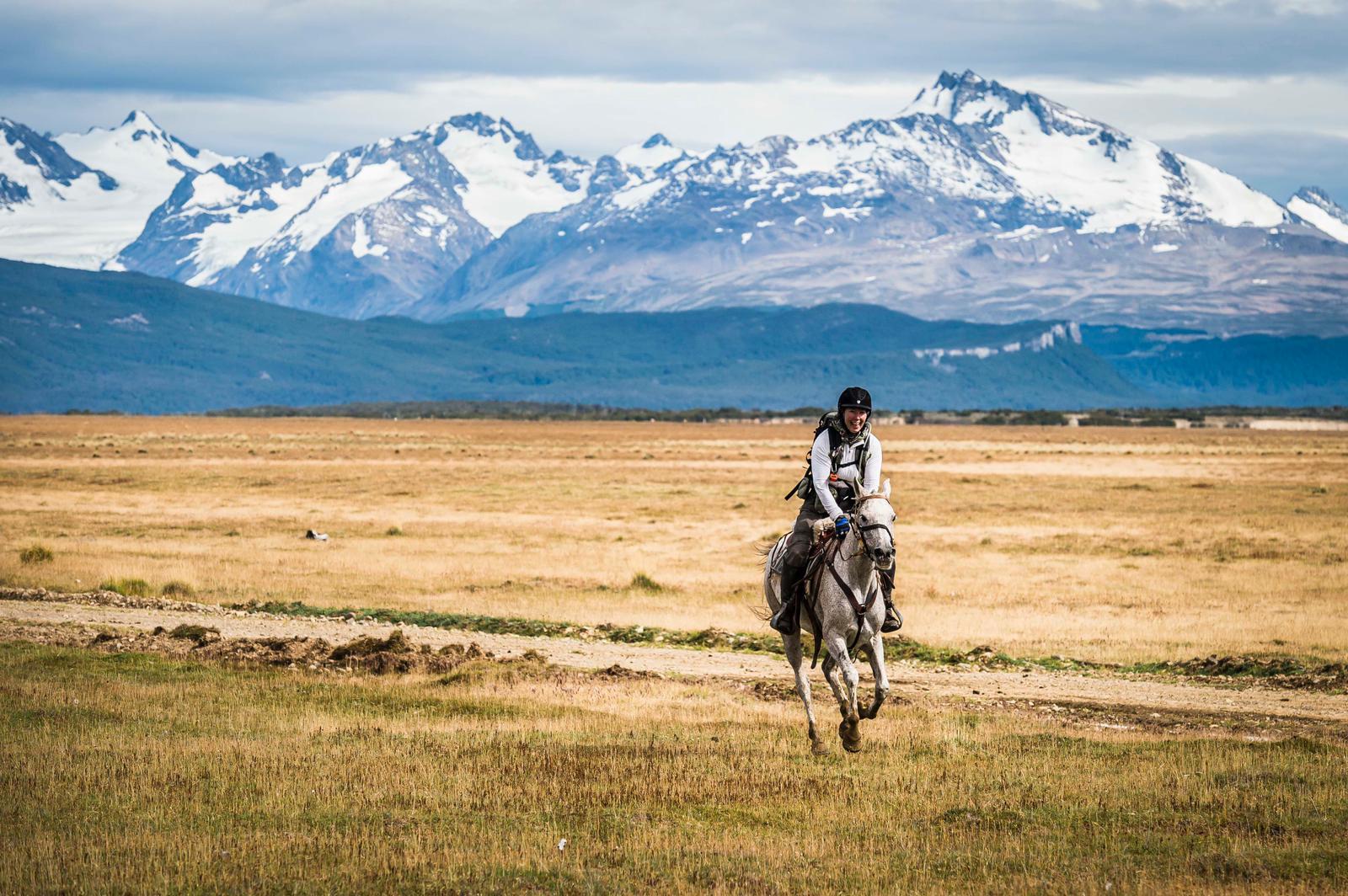 Marie Griffis out on her own on one of the flatter faster sections. Photo by Richard Dunwoody.

After running the Mongol Derby for a decade, renowned as the “world’s toughest horse race,” The Adventurists decided it was time to grow the sport of ultra-endurance horse racing and went in search of the next world beating adventure. They didn’t just replicate The Mongol Derby with new scenery, but designed a new race from the ground up, based on the landscape, culture, history and horses of Patagonia and the Gauchos, and created, what they believe, is the “greatest test of horsemanship and wilderness skills on Earth.” And so, on the 5th of March, 24 riders from around the globe lined up at the start of the Pioneer Edition of the Gaucho Derby and, over the next 10 days, the race certainly lived up to its billing. 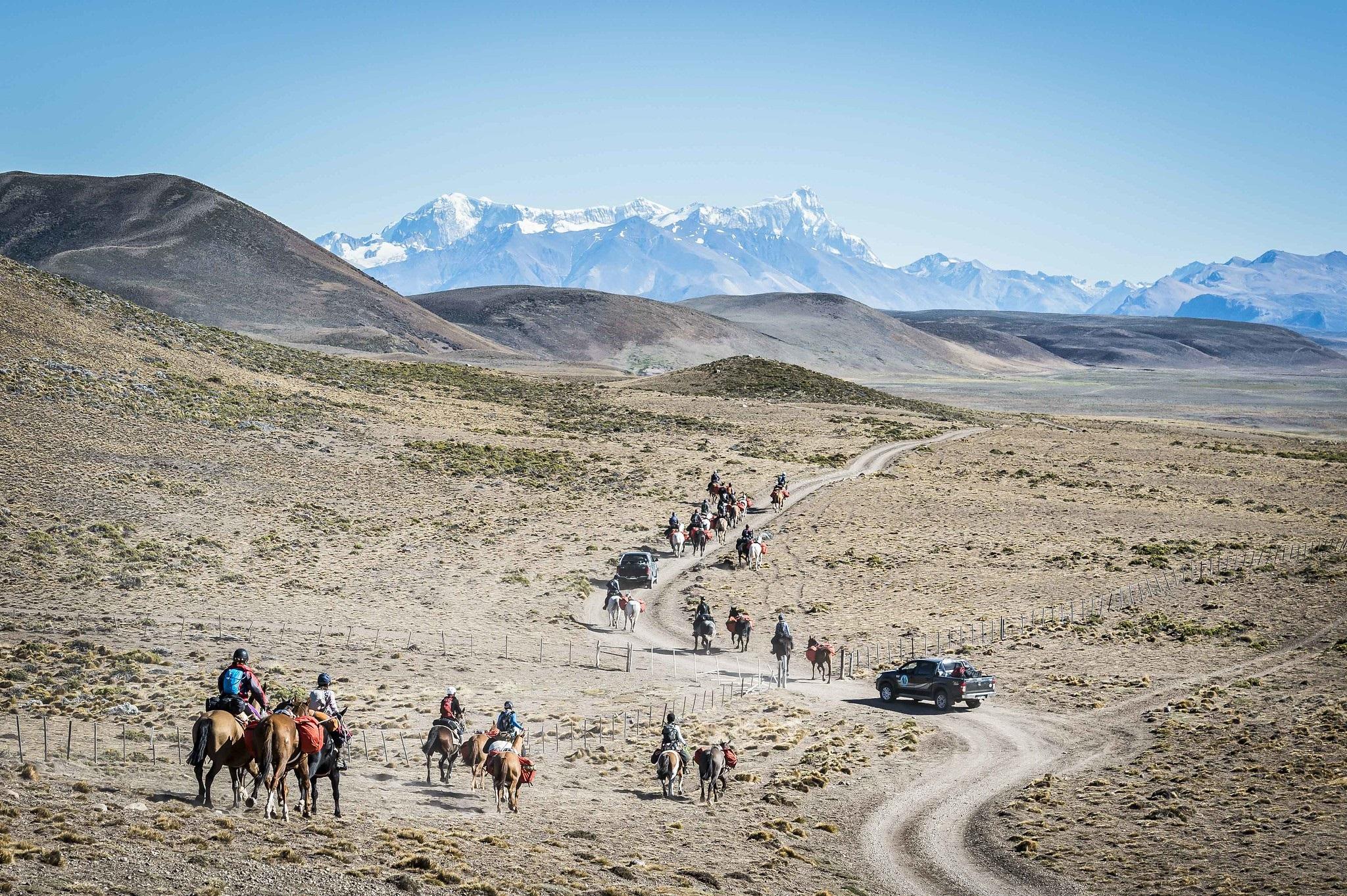 The pioneers on their way to the first vet check. Photo by Richard Dunwoody.

The nine-stage race crossed 500km of Patagonian wilderness, including high mountains and pampas lowlands, making the event not just a test of riders’ skills on a horse, but pushing their navigation skills to the limit and testing their physical endurance and ability to handle the wilderness. 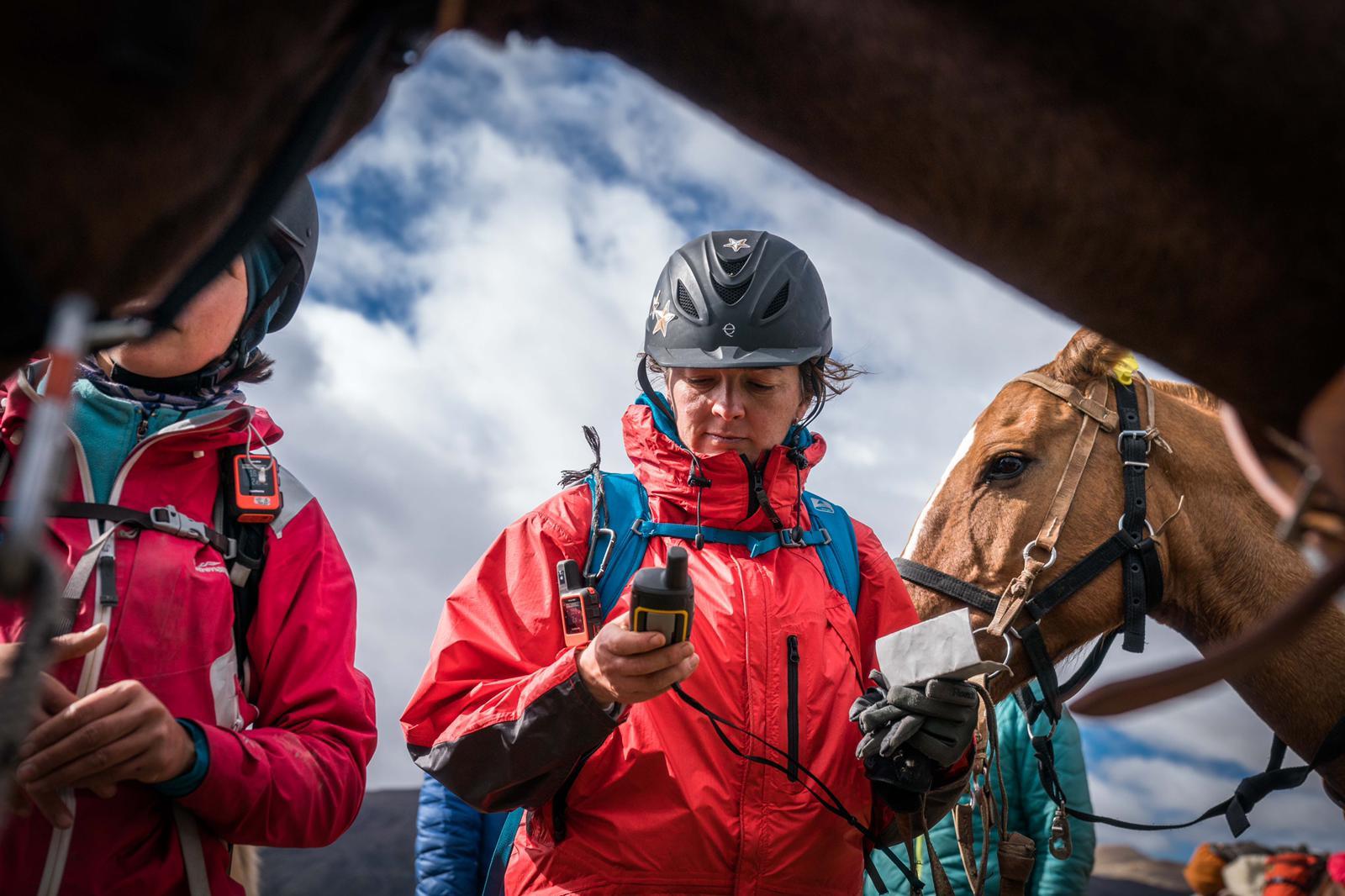 Navigation skills played a huge part in the race. Photo by Anya Campbell.

Whilst The Gaucho Derby is a multi-horse race, it differs from the Mongol Derby. The race is broken down into 40km legs, but riders don’t change horses at every section (as they do in the Mongol Derby). The high mountains are a test of skill, not flat out speed, so the horses don’t run out of steam and can cover several legs at a time. On the flatter pampas sections however, where horses can eat up the miles quickly, riders swap to fresh horses regularly. 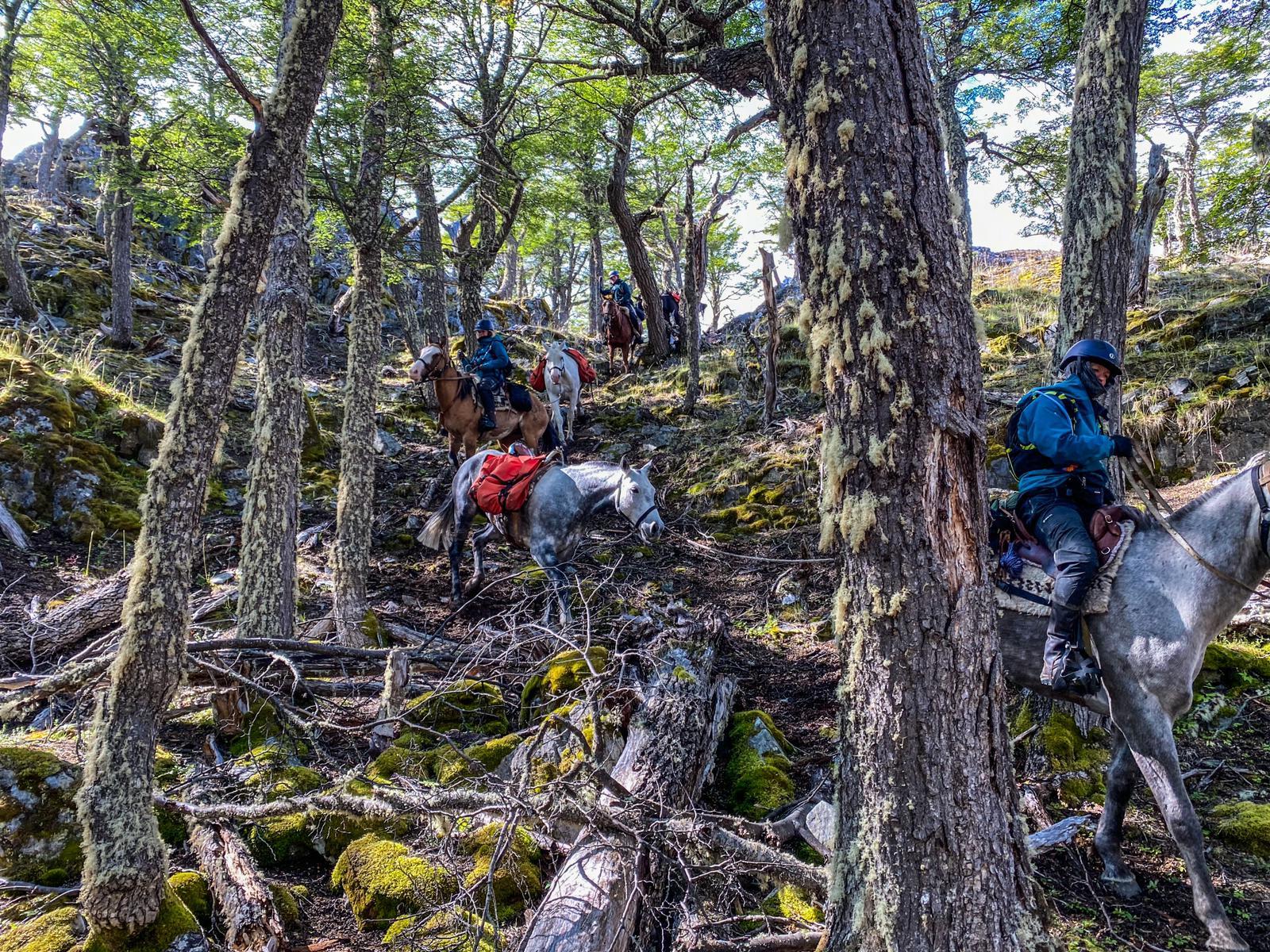 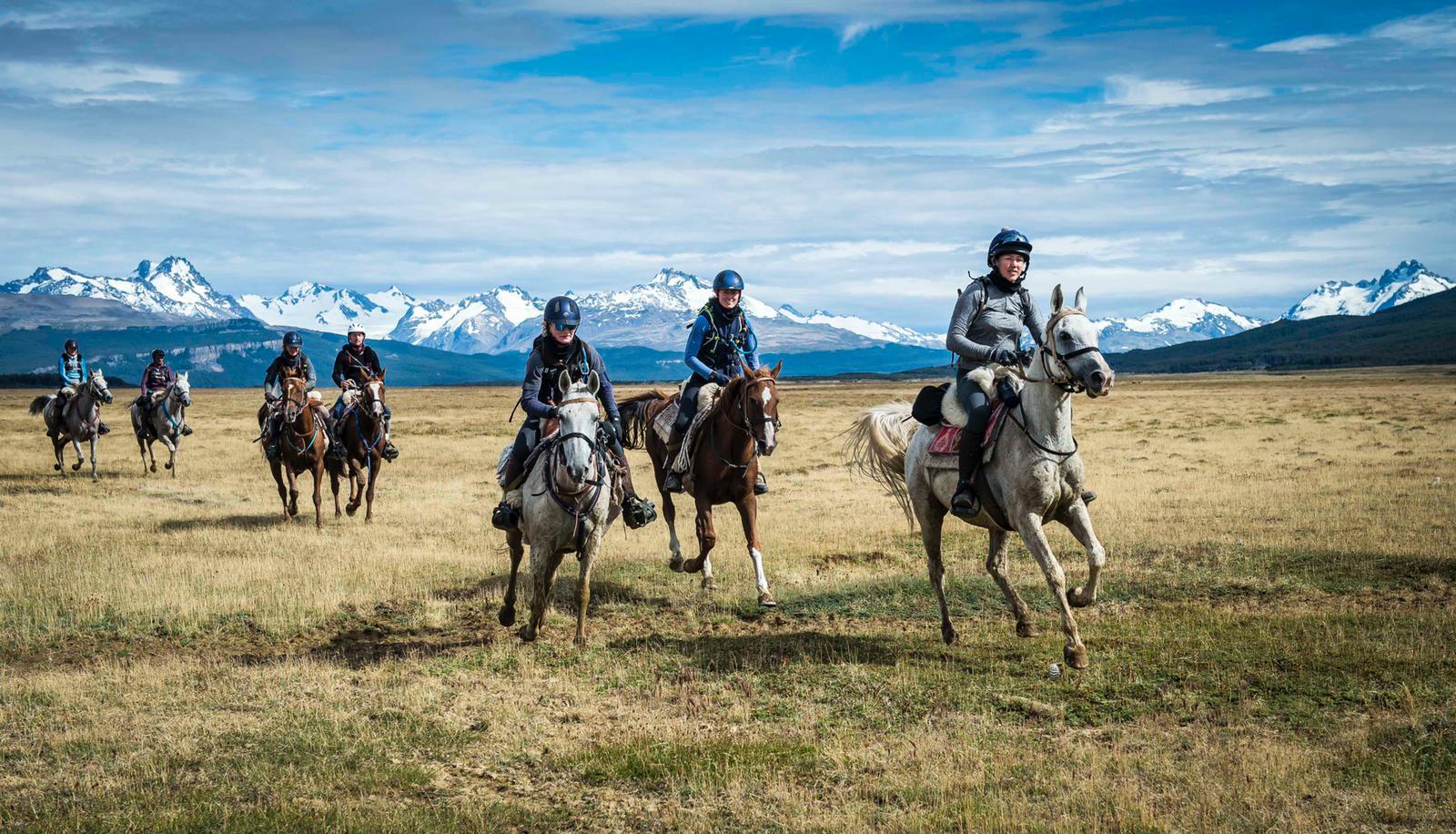 Clare King leading the way on one of the faster stages. Photo by Richard Dunwoody. 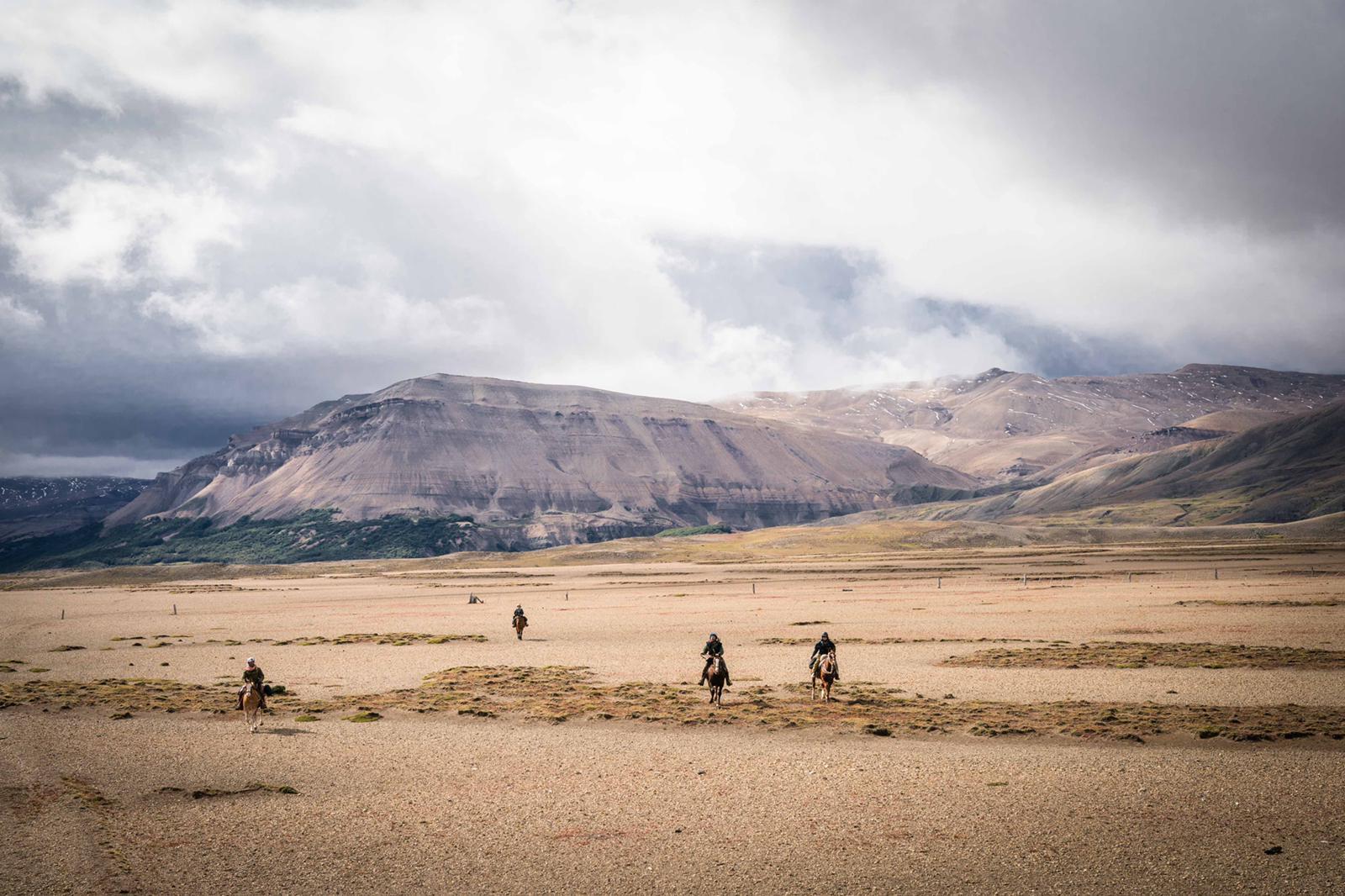 Riders also do large sections with pack horses, to carry extra kit into the mountains. As well as looking after and guiding a second animal, they have to switch mounts mid-leg to ensure the health of both animals by minimizing the work. 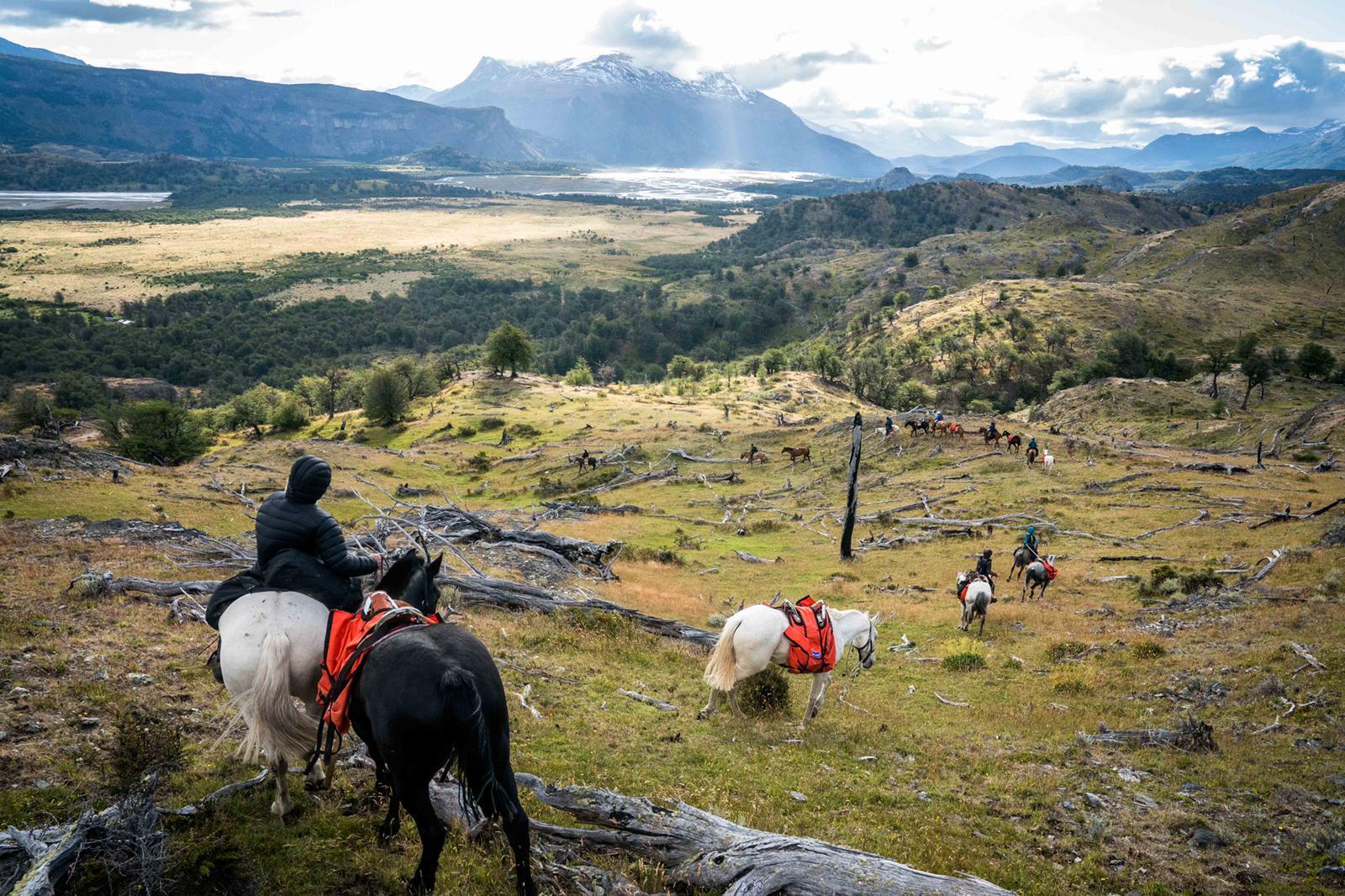 Riders with pack horses coming down from the mountains. Photo by Anya Campbell.

The Adventurists monitor the horses’ welfare at every stage, with vet checks every 40km as well as race marshals and emergency and roaming vets to ensure that no rider puts their own competitiveness before the welfare of the animals. “We would rather nobody wins than someone wins by pushing too hard. Riders seen making bad decisions, riding too fast across difficult terrain or not presenting horses in great condition will get penalties or be disqualified. Full rules will be available to riders as we are developing them with our vet team now.” 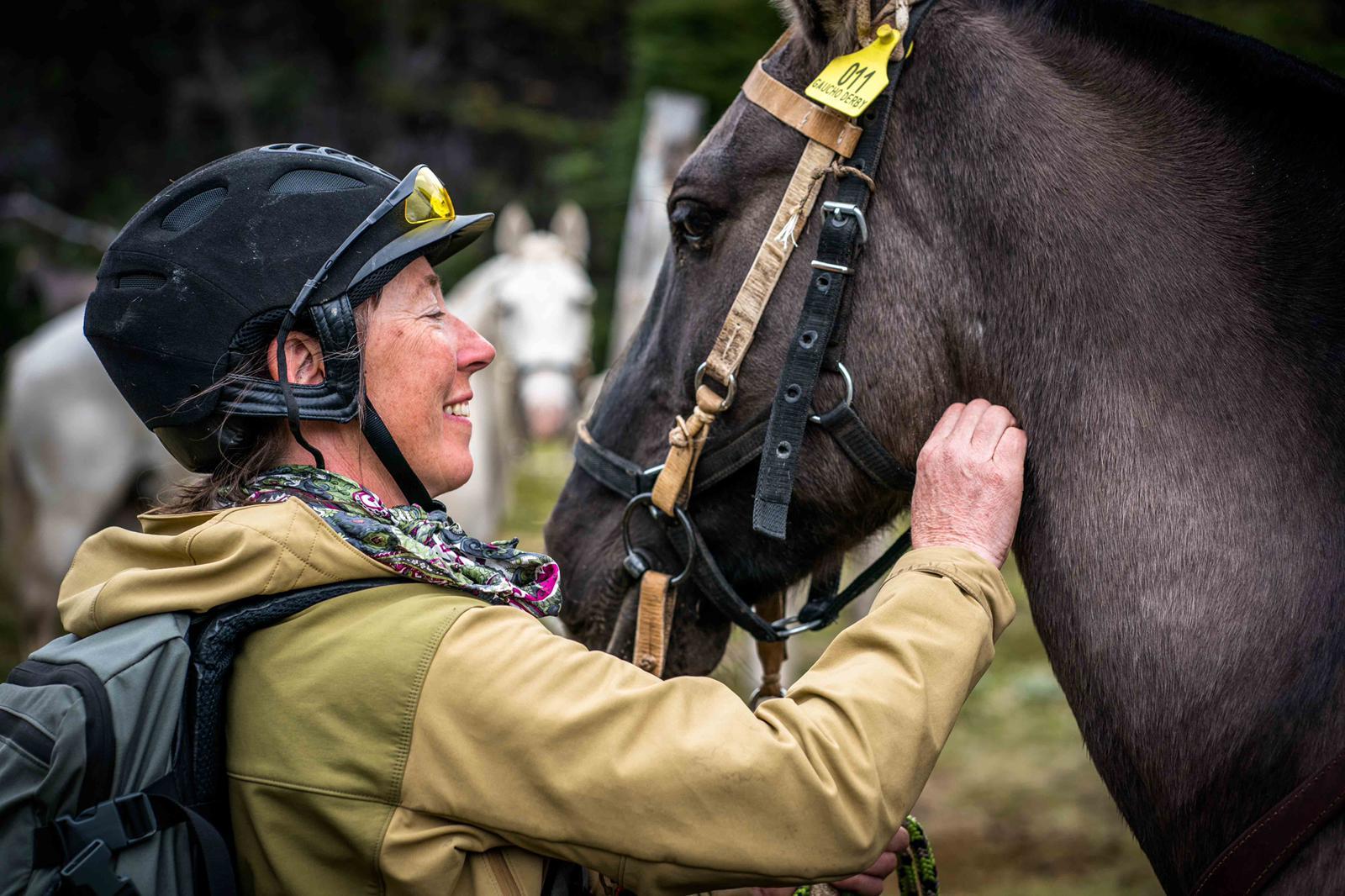 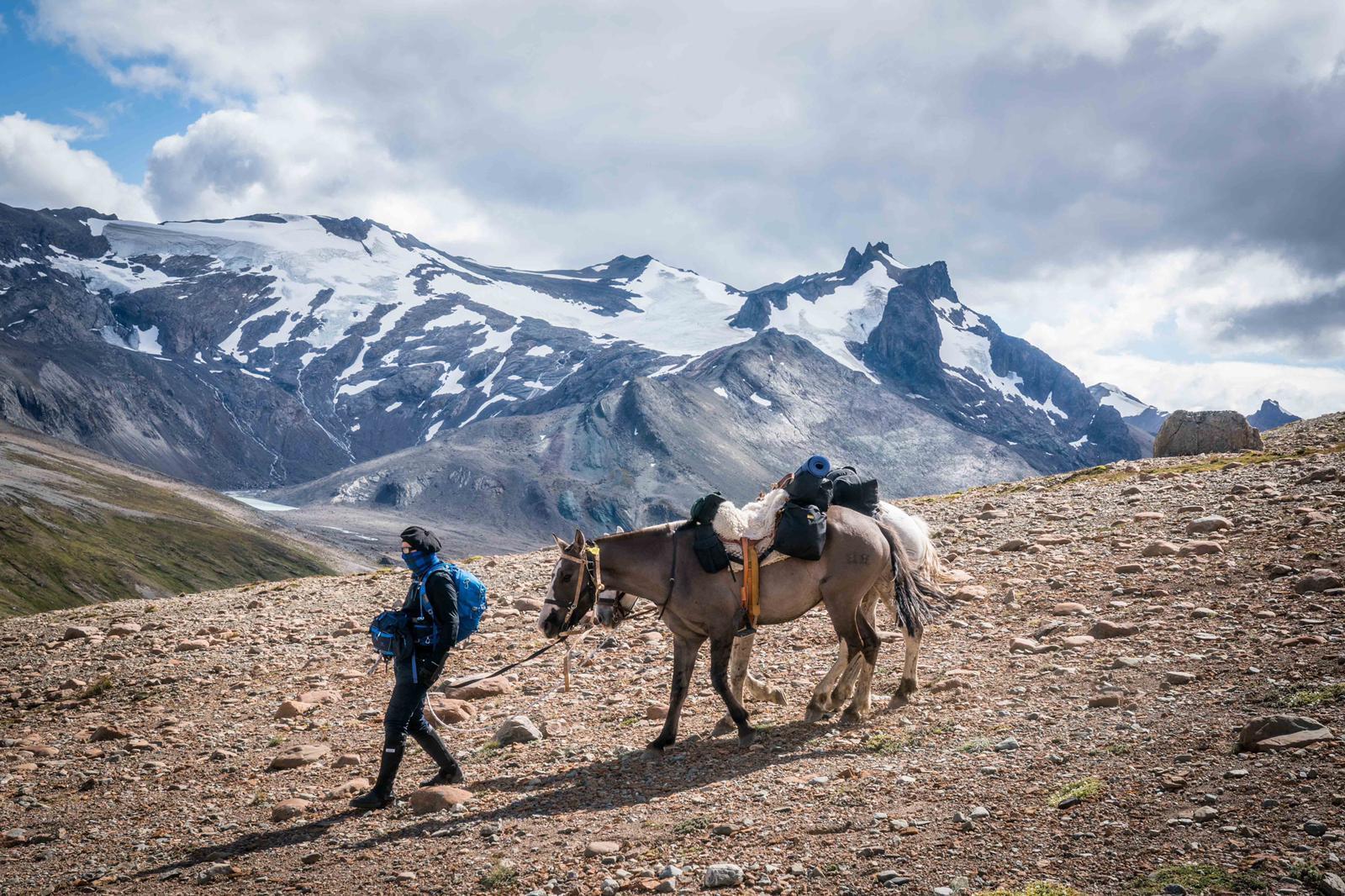 The first Gaucho Derby began with a fast valley ride for some. Other riders took what they believed was a short cut through the mountains, only to have to turn back and lose any hopes of an early lead when they met impassable terrain. Temperatures were hot, with riders wondering why they’d bothered packing so many cold weather clothes, luring many riders into a false sense of security as to what was to come. 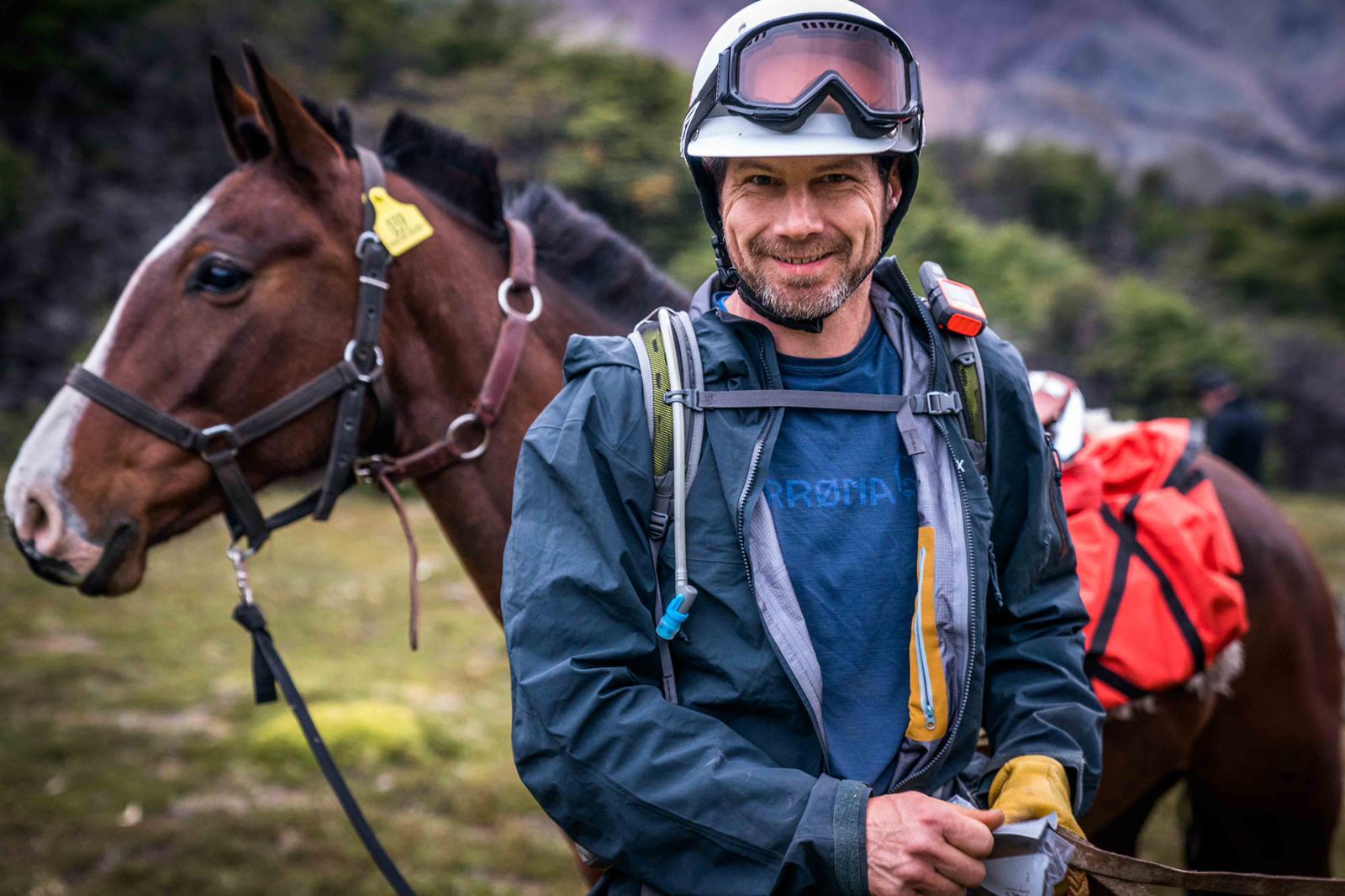 Over the next few days, navigation remained a key part of the race. Riders traversed some breath taking, but “pretty gnarly” countryside, with trails through passes, river valleys, dense forests, and bogs presenting challenges — all whilst individual riders tried to chivvy along a packhorse and keep their own horse on an even keel. 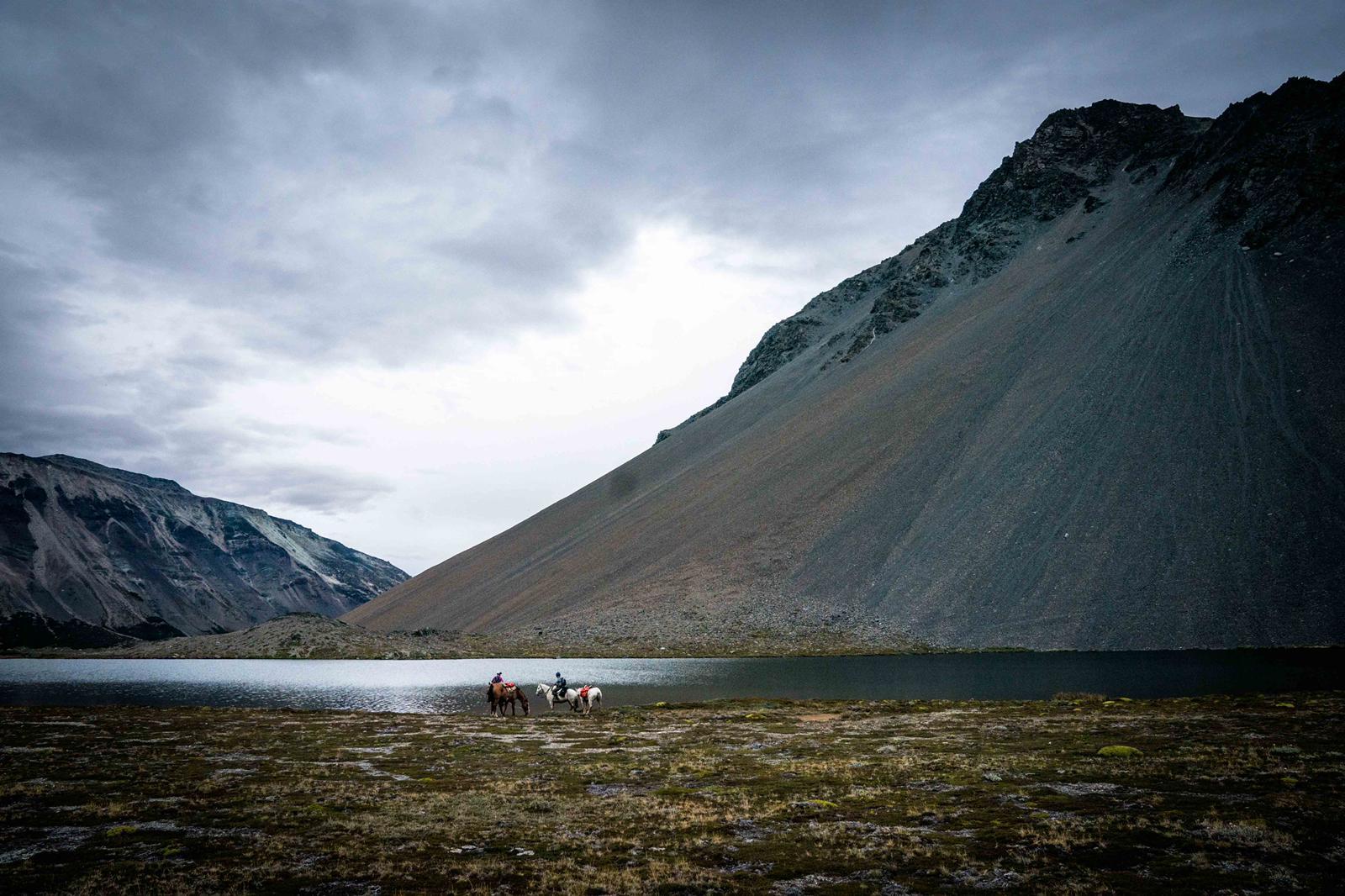 No shortage of dramatic landscapes. Photo by Richard Dunwoody. 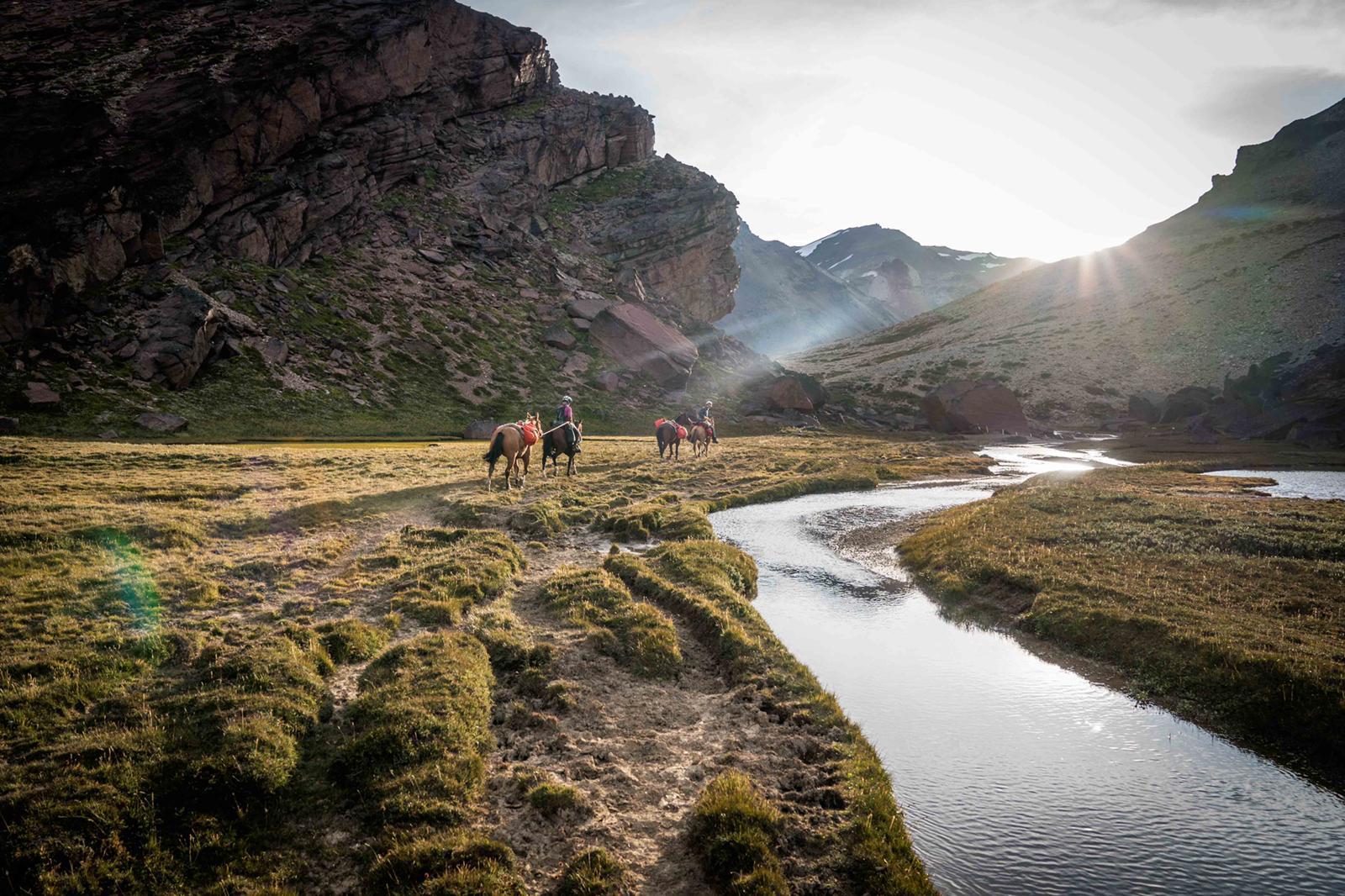 Riders in the morning light. Photo by Richard Dunwoody.

Then came the storm! Drama unveiled as the race headed through the mountains and a ferocious snow storm swept in. Local Gauchos helped guide riders to safe passage and an emergency shelter was created in a forest, with some riders (most to re-join the race later) air lifted out as a precaution. 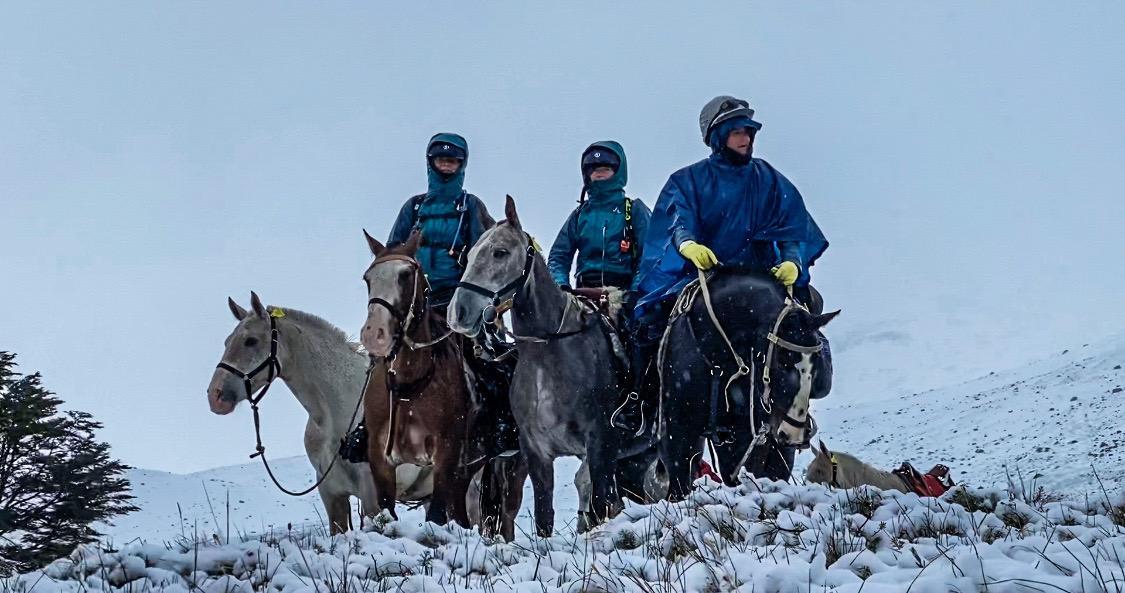 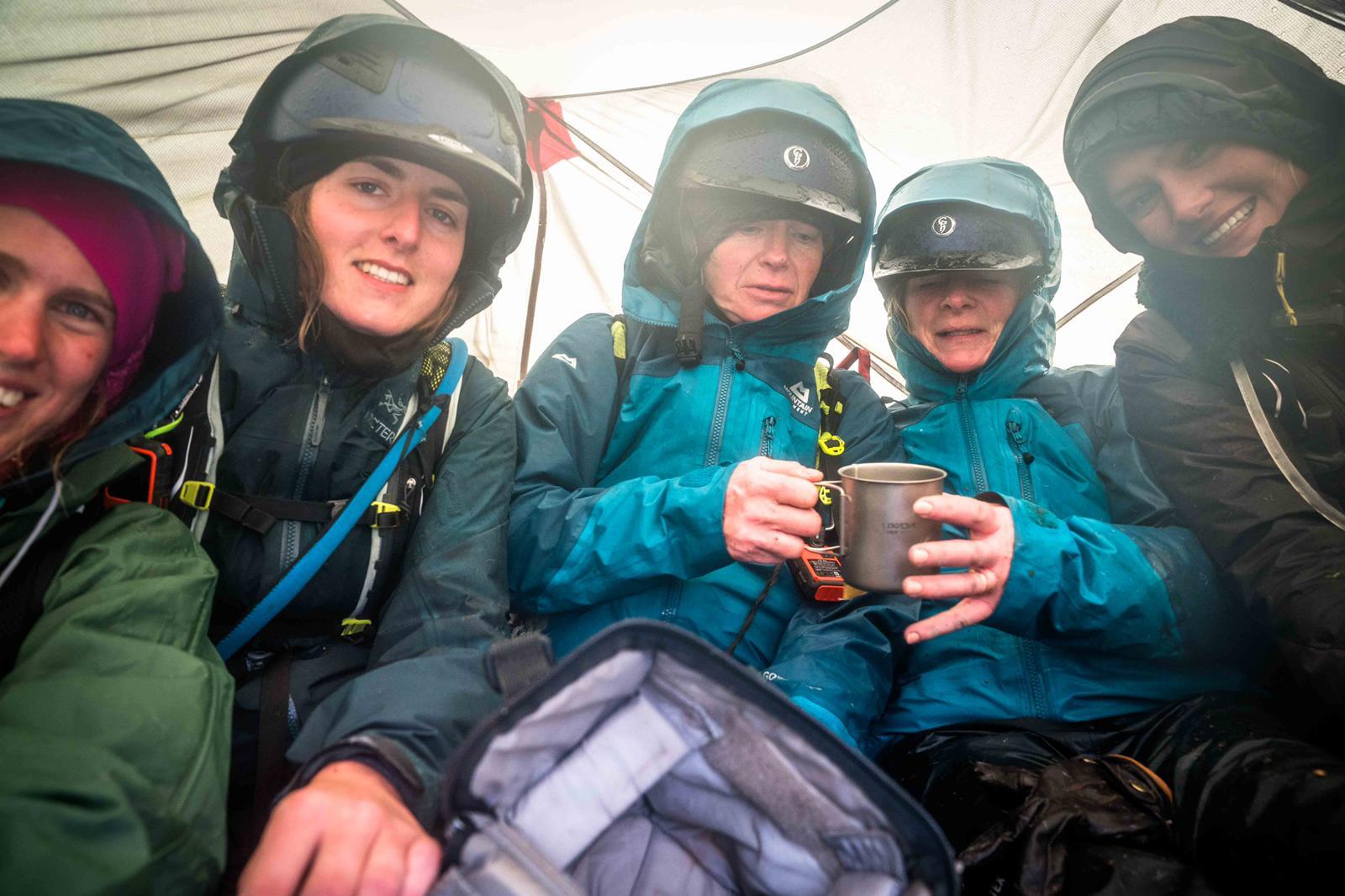 Sheltering from the storm. Photo by Richard Dunwoody.

With further bad weather forecast, the race was reset on day six, with riders carrying forward their accumulated times from the previous stages, before the storm hit. Some faster riding, without pack horses, ensued and in the end, it was Marie Griffis (a 2016 Mongol Derby veteran who runs an annual equestrian trip into the US mountains back home in Montana) who crossed the line first, having “weathered the storm well” and ridden confidently ever since.“It was like a dream, as we crossed the river to the final vet check and finish line all I could think of was there’s no way I’m getting my feet wet again!” 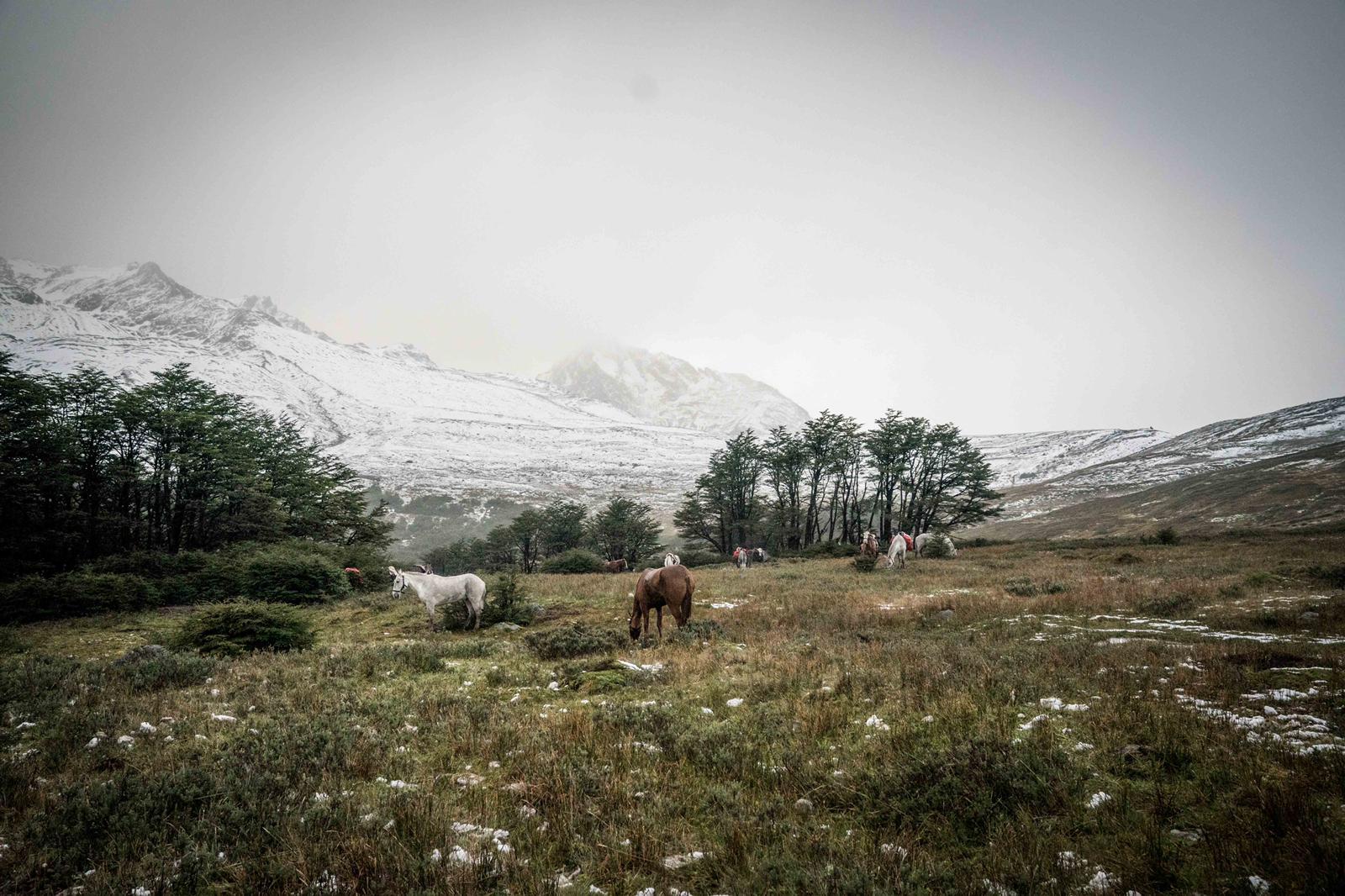 Horses grazing after the storm. Photo by Anya Campbell. 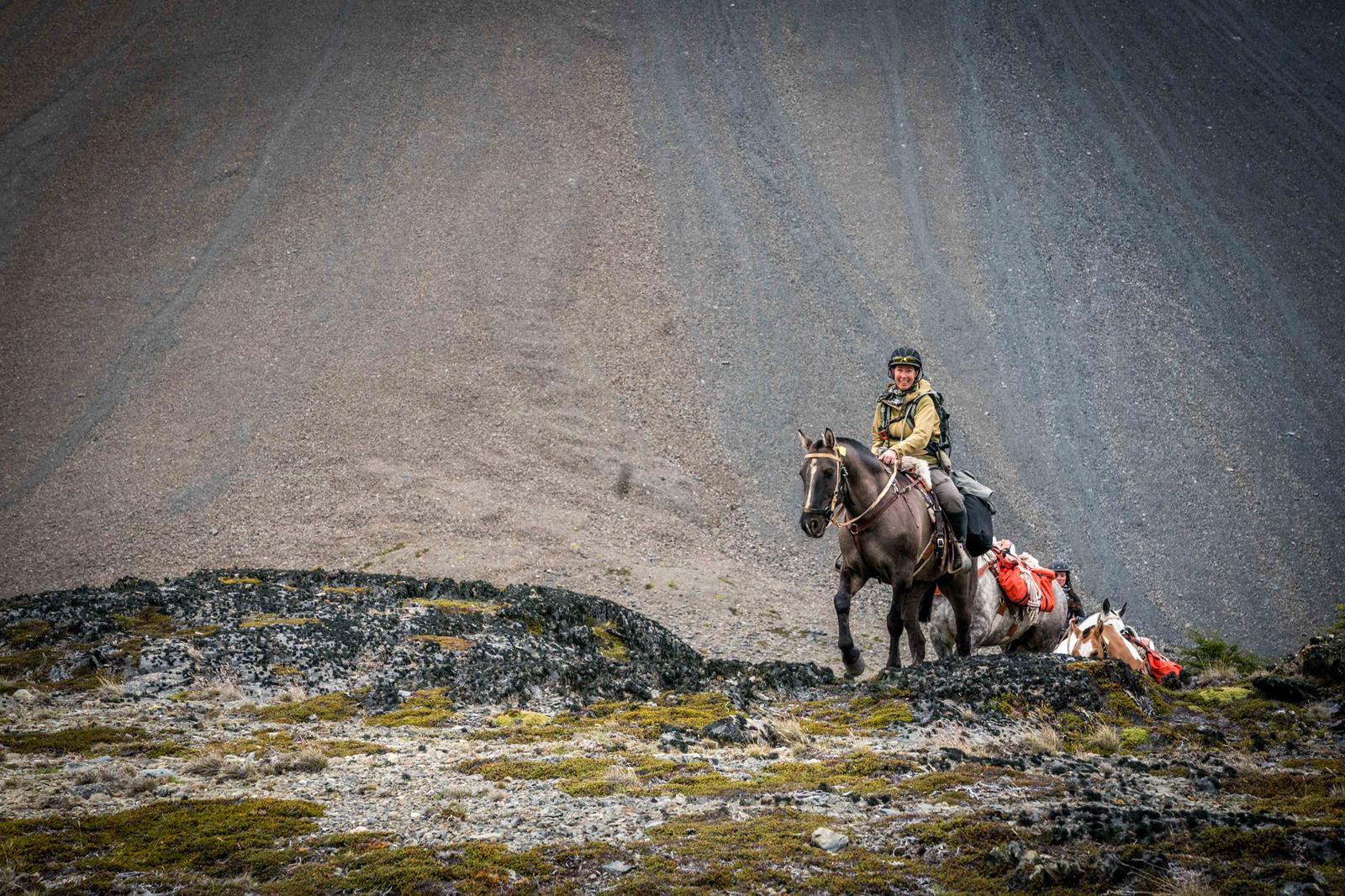 Marie Griffis over the top first. Photo by Richard Dunwoody.

Sharing her thoughts on the race, Marie commented,“The Arabs were the best bit! They were such athletes, ripping through the countryside on them was thrilling. They were really well cared for and highly trained. Plus Andy and Luly, who own them, were the best! The cooks we had, I have great respect for them.”

And it seemed, for her at least, the snowstorm wasn’t the hardest part of the race: “The forest [was the toughest part], bashing through it as it was on an incline, bogs literally everywhere. I had a dead tree fall on me in route to [checkpoint] three.” 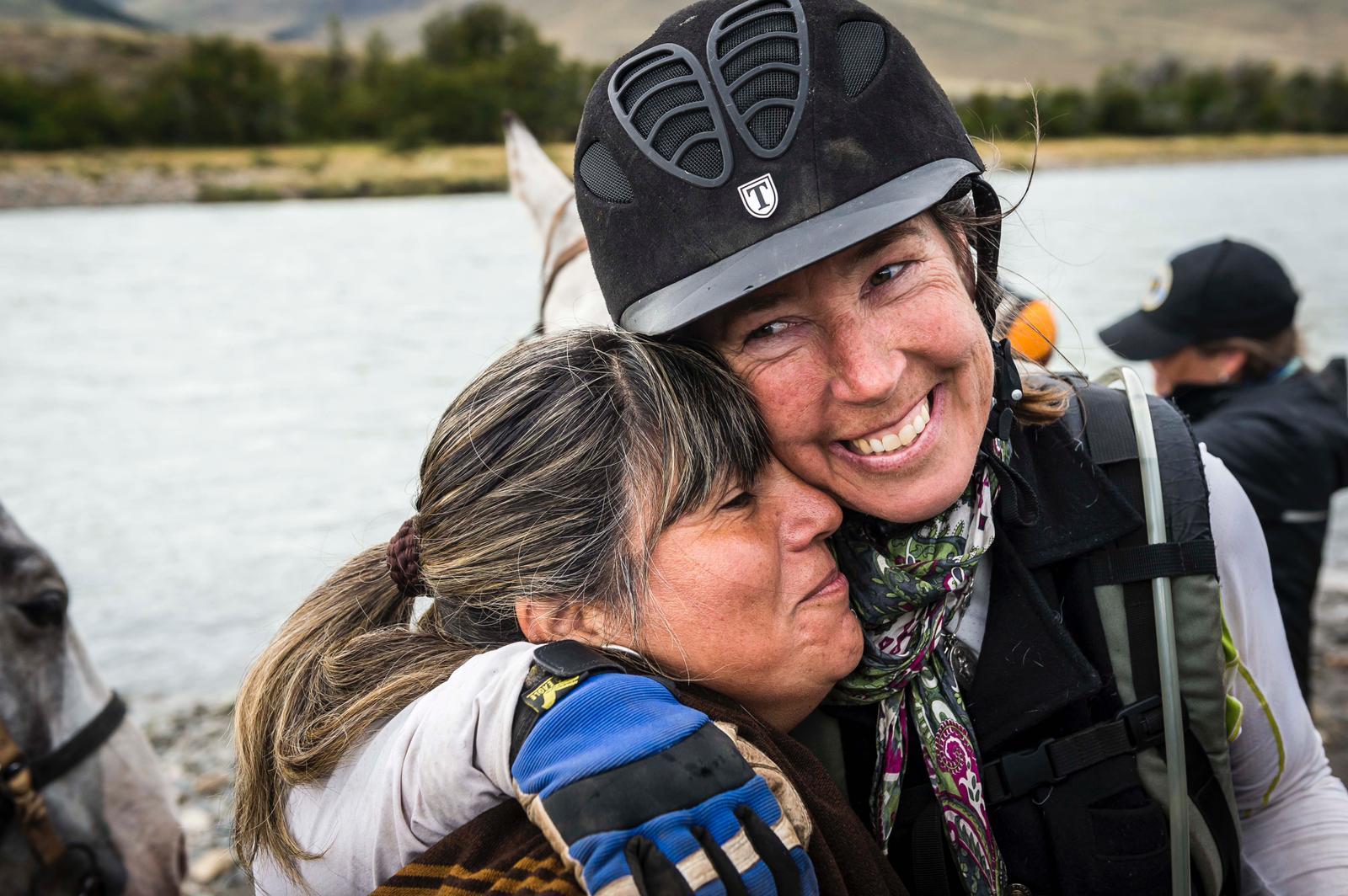 Marie elated at the end of the race. Photo by Richard Dunwoody. 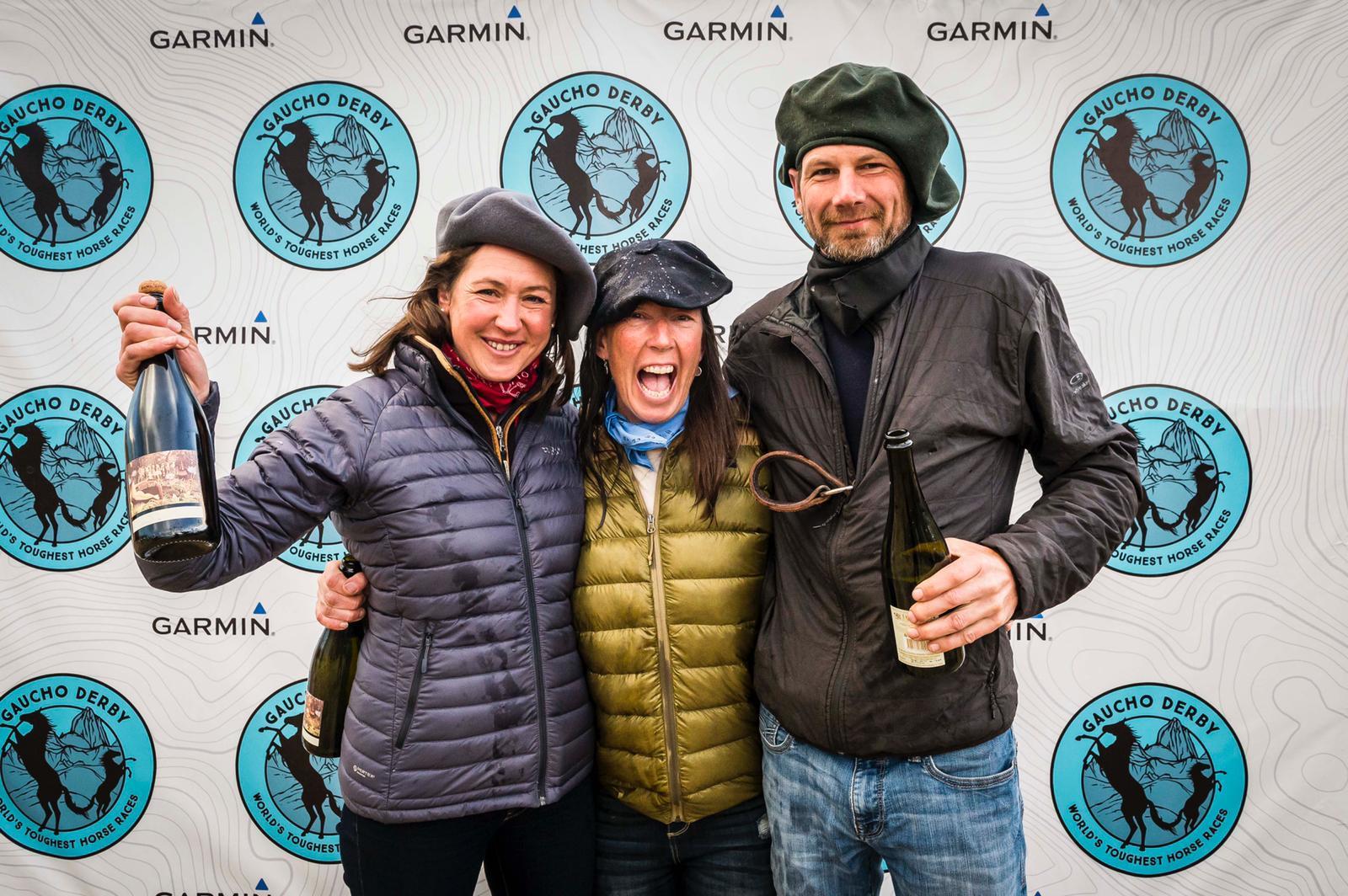 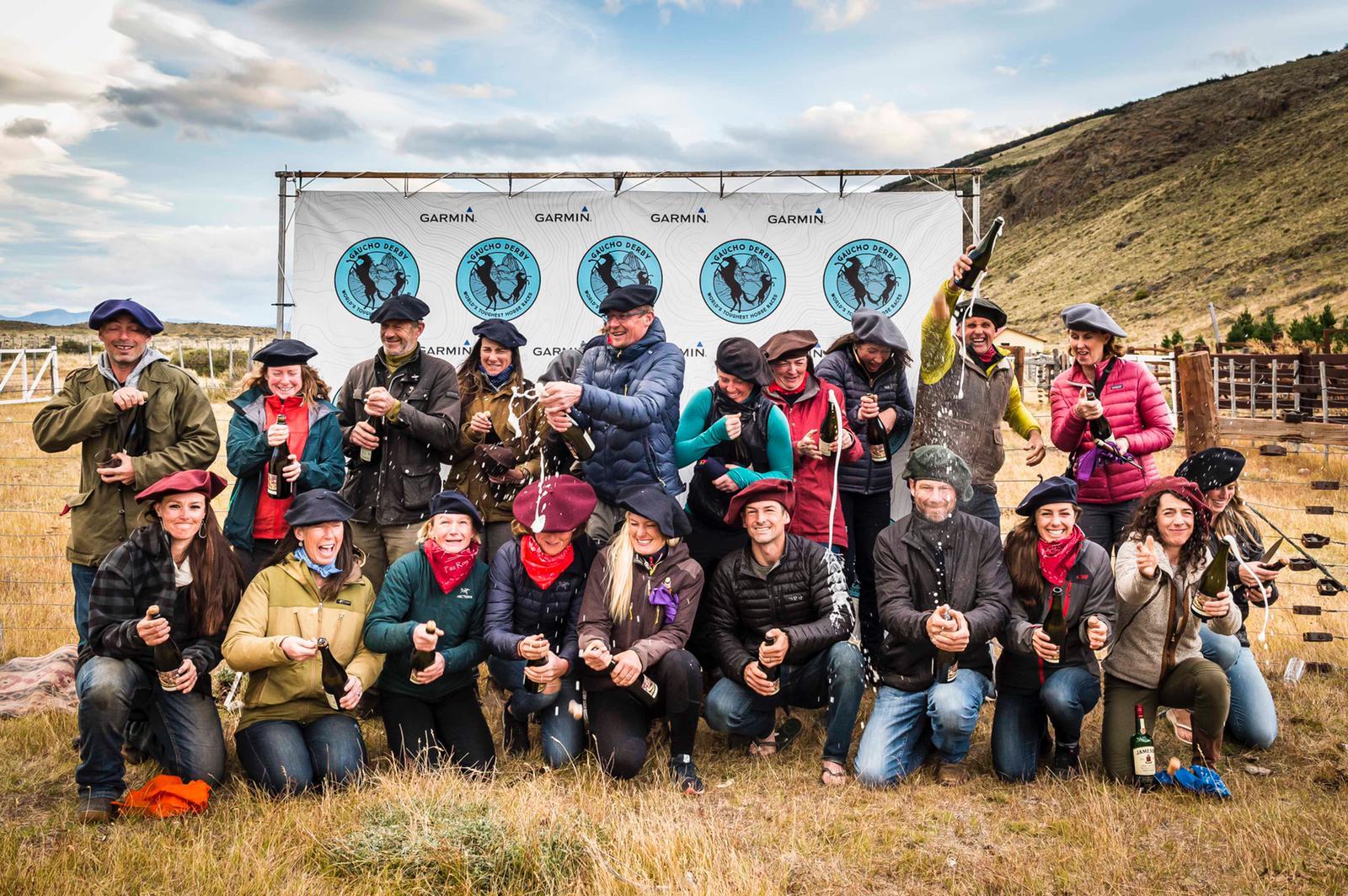 Riders celebrating at he end of a tough but exhilarating 10 days. Photo by Richard Dunwoody.

About the Gaucho
“He has taken his first lessons in riding before he is well able to walk,” said David Christison in the 1882 Journal of the Anthropological Institute. Gauchos were nomadic, skilled horseman and cow herds who were reputed to be brave and somewhat unruly. Greatly admired and renowned in folklore and literature they became an important part of the regions cultural tradition. A way of life that has dwindled as farming practices and land ownership changed.

Clothed in a poncho (which doubles as a saddle blanket and as sleeping gear), a large knife called a facón and loose trousers called bombachas held in place with a wide belt, they travelled far across the wild landscapes of South America. 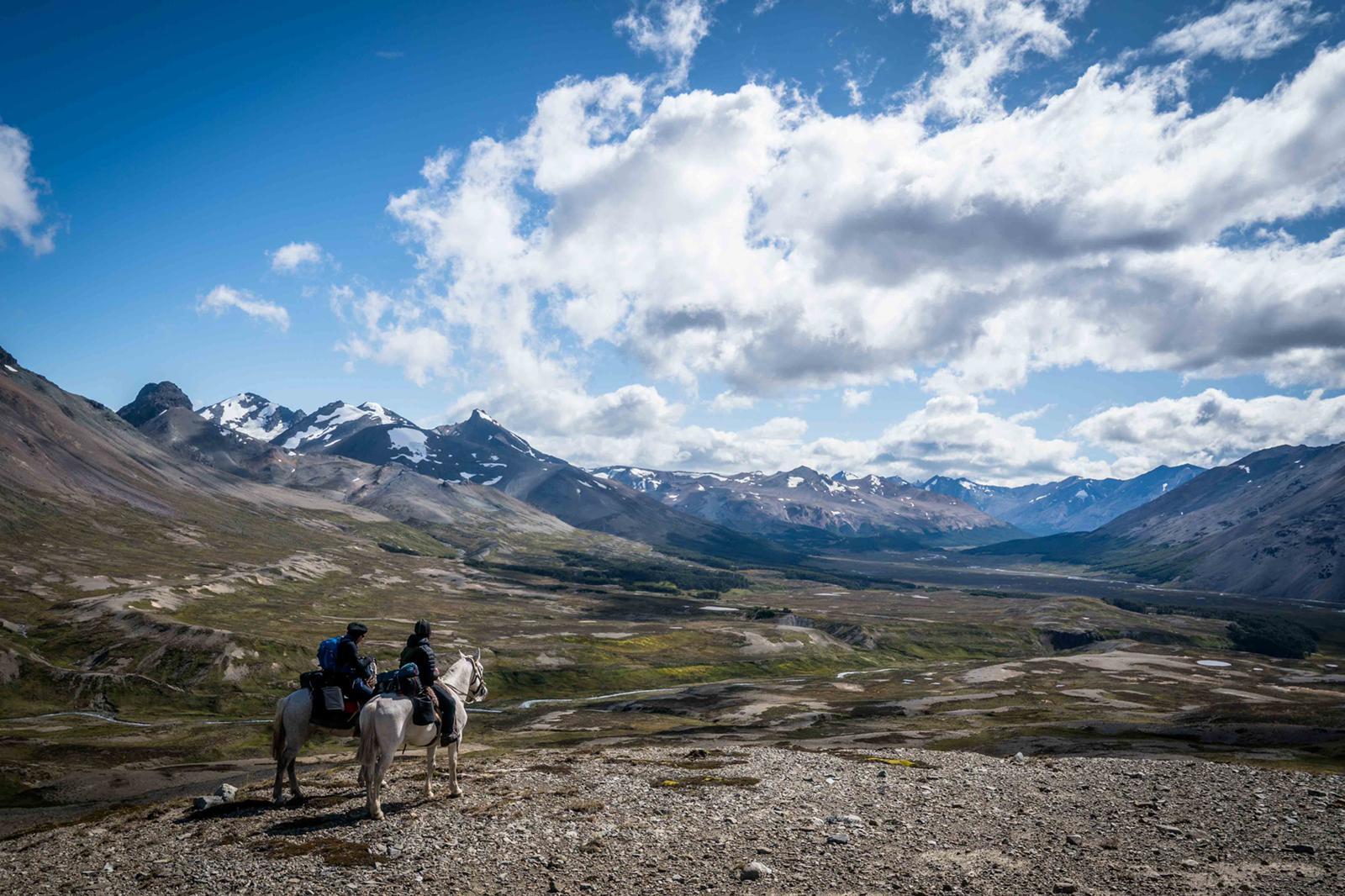 The race is forgotten for a moment to enjoy the view. Photo by Richard Dunwoody.

If you believe you have what it takes to ride in next year’s Gaucho Derby, visit https://www.theadventurists.com/adventures/gaucho-derby/