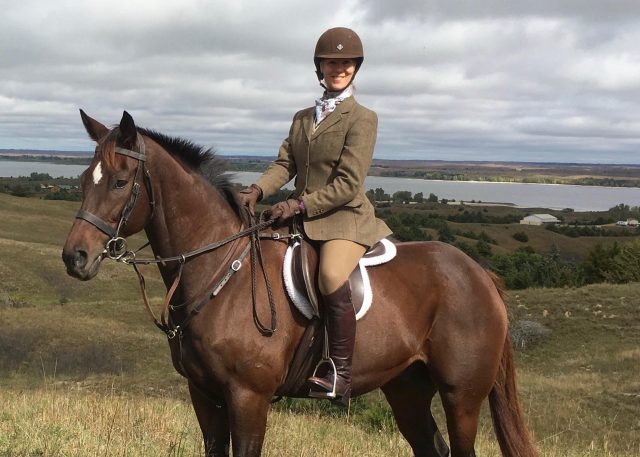 March 18, 2020DeAnn SloanReader Submission#ESSAY, #FUNNY, Field HuntingComments Off on This Hunt Season: How Do You Think That Went?

Sometimes we look back on our riding season and can’t help but admit that it could have gone better. Reader Judith Wilson does just that with her 2019/2020 hunt season. Thankfully, she has a sense of humor. Take it away, Judith…

I love Horse Nation. On March 9, 2020, they posted an article about common expressions used by riding instructors, and what they really mean. Like most of the posts on Horse Nation, this blog was hilarious! Among the various expressions they translated, my favorite was, “How do you think that went?” Translation: “Are you aware of what an utter disaster that was?”

Perhaps that one appealed to me because, as I write this, the 2019 – 2020 hunt season is nearing its close and I’m feeling the need for some deep reflection since I fell six times – that’s right, SIX TIMES – this season! Read on, as I evaluate each fall and its root cause…

Fall # 1: I was behind Ken Trogden when he and his horse, Moseby, took a bad jump over the coop into Gentlemen’s Hill, and Ken hit the ground on the landing and broke his wrist. My horse, Parker, and I were landing after jumping the coop just as Ken hit the ground and his air vest deployed. Parker spun at the sight and sound. I almost stuck it but, in the end, had to bail. When I ask myself how this ride went, I can hear Barbara Lee, one of my riding instructors, in my head, “YOU WERE FOLLOWING TOO CLOSE!” Okay. Mea Culpa.

Fall # 2: My horse, Tucker, and I were jumping the middle coop in the fence line between the Puppy Pond and the BRK house, when Tucker paused mid-lift. Rather than push off with his back feet, he seemed to just drag them forward, into the coop. His mid-air pause rocked me forward slightly, and the abrupt halt from his hind feet crashing into the coop sent me forward over his shoulder and tumbling to the ground on the landing side of the coop. Tucker had to struggle a bit to get his back feet disentangled from the gaping holes he made in the base of the coop. He then kicked them over to join his front end and me on the landing side, at which point I examined him and found only minor scratches. I remounted and, with my friend Kayleigh Wilcher’s encouragement, took some easy coops next to make sure Tucker was alright. He was, so we rejoined the field and finished the hunt.

Kayleigh and others who witnessed our crash were as lost as I was for an explanation. One speculated that shadows confused Tucker. I’ve got nothing else, so I’ll go with that. 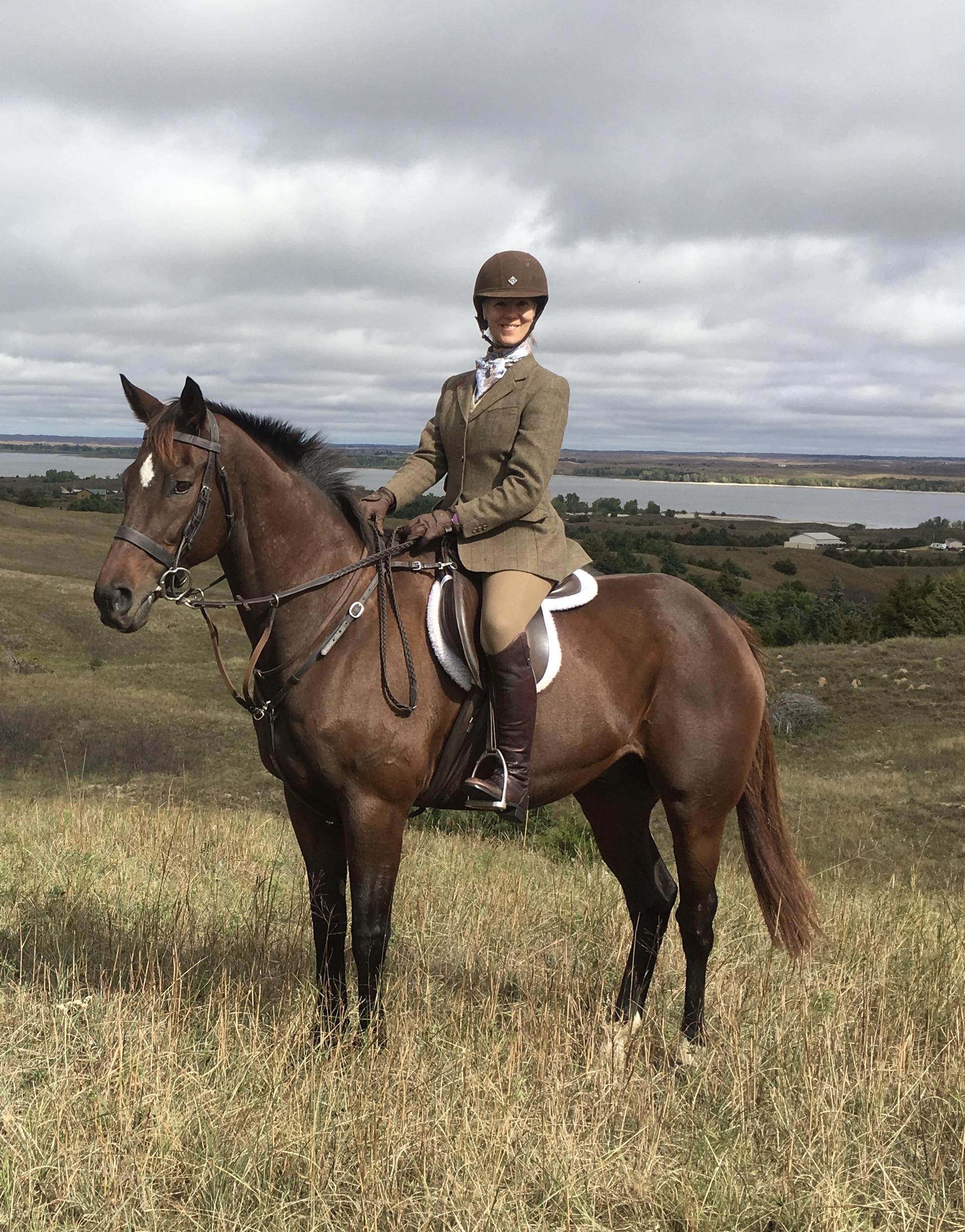 Fall #3: I was hilltopping on my beloved Hobbes this day, and Field Master Leonard Loudermilk stopped the group at the Gentleman’s Hill gate to wait for a road whip to open it for us to cross Stagecoach Road. Saundra Maxwell, car following that day, came along directly to open the gate. None of us, most especially Saundra and Hobbes, were aware that the gate was actually off the top hinge. Saundra had the gate open about one-quarter of the way when the top tilted inward and the gate fell to the earth, pulling poor Saundra down with it! As Saundra face-planted on top of the gate (ouch!), Hobbes spun and lunged as quick as a cat, leaving me mid-air. Eyewitness accounts from Ray Walters and Master Gary Wilkes describe my fall like this: I hung in mid-aid briefly, just like Wile E. Coyote beyond a cliff’s edge, eyes blinking (“doink” “doink”) in confusion, then plummeted downward with legs spread-eagle skyward, into a fluffy patch of tall grass. They gave me a “10” and I gave Master Charlie Lewis another $20 (cropper fee). Who’s to blame is a mystery to me. 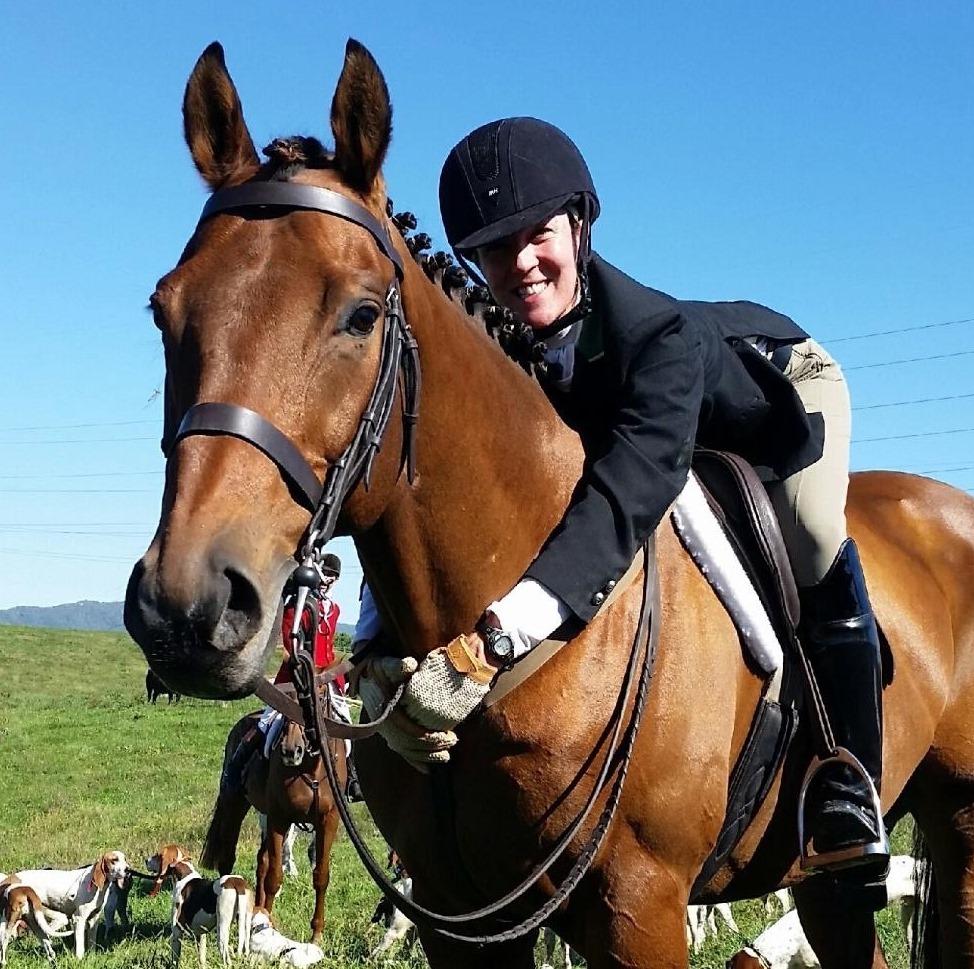 Fall #4: It was Hobbes’ turn in the rotation on this fateful day. Fairly early in the hunt, we crossed a deep, V-shaped gully with boggy, slick mud on both sides, causing horses to slide down in and have to scramble out. Hobbes lunged up the far side then threw a huge buck when he reached the top. The lurch put me off balance, and the buck sent me careening – WHAM! My bell was rung!

Hobbes has never bucked like that before. I always expect him to do his little “rocking horse” bucks with the first gallop of a ride, but I had no reason to expect a bronco stunt like that! I had him checked out shortly thereafter and determined that pain in his withers was probably the reason why he bucked. So then I had his saddle checked. Saddle checked out fine but it was determined I was riding him in a half pad that was too small, thus creating pressure on his withers. So this fall was either a tack issue, or rider error for not knowing about said tack issue. I think I’ve suffered enough, so I’m going to blame this fall on the tack!

Fall #5: My mare, Parker, is perfect. And by “perfect”, I mean she only has two flaws, which is as close to perfect as any horse can get. I mean, NO horse has ZERO flaws, right? Parker’s flaws are 1) yanking the reins out of my hands and 2) she hates anything in her face. Parker will dodge to avoid branches, flying dirt, swishing tails and anything of the sort that she views as a risk to her beautiful face. She is the easiest ride, except for the occasional dodging, and I generally know when to expect it and ride accordingly.

Fall #5 happened when we were trotting up a trail in the vicinity of Deacon’s Coop and had to duck under some cedar limbs. I leaned down next to Parker’s neck. All she had to do was duck her head just a little bit and we both would have been clear of the limbs…but she didn’t. Instead, she stopped and spun away from the tree leaving me, once again, dangling mid-air like Wile E. Coyote, before dropping to the ground below. Ground riddled with cedar roots, by the way. So whose fault was this one? Well, it can’t be Parker’s fault, because she’s perfect, so I’m going to have to blame it on the low limbs. 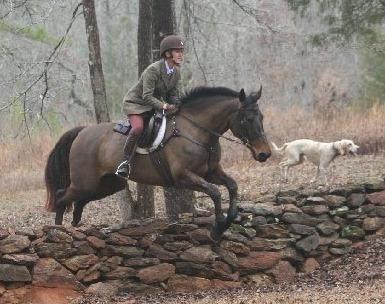 Fall #6: I took 10 days off between fall #4 and fall #5, because fall #4 gave me a concussion, a minor detail I failed to mention earlier. Fall #5 actually occurred during my first time back after said concussion… UGH! Fall #6 happened during my second time out after the concussion… three consecutive rides with falls… double… no, TRIPLE UGH!! This time I was on Flyer and, even though he’s a wonderful jumper, I rode with the hilltoppers in an effort to save myself from further injury. The chase took us out of the jumping country, so Master and Huntsman (and husband) Epp Wilson invited me to ride up with him. I love riding in his pocket, so of course I accepted. 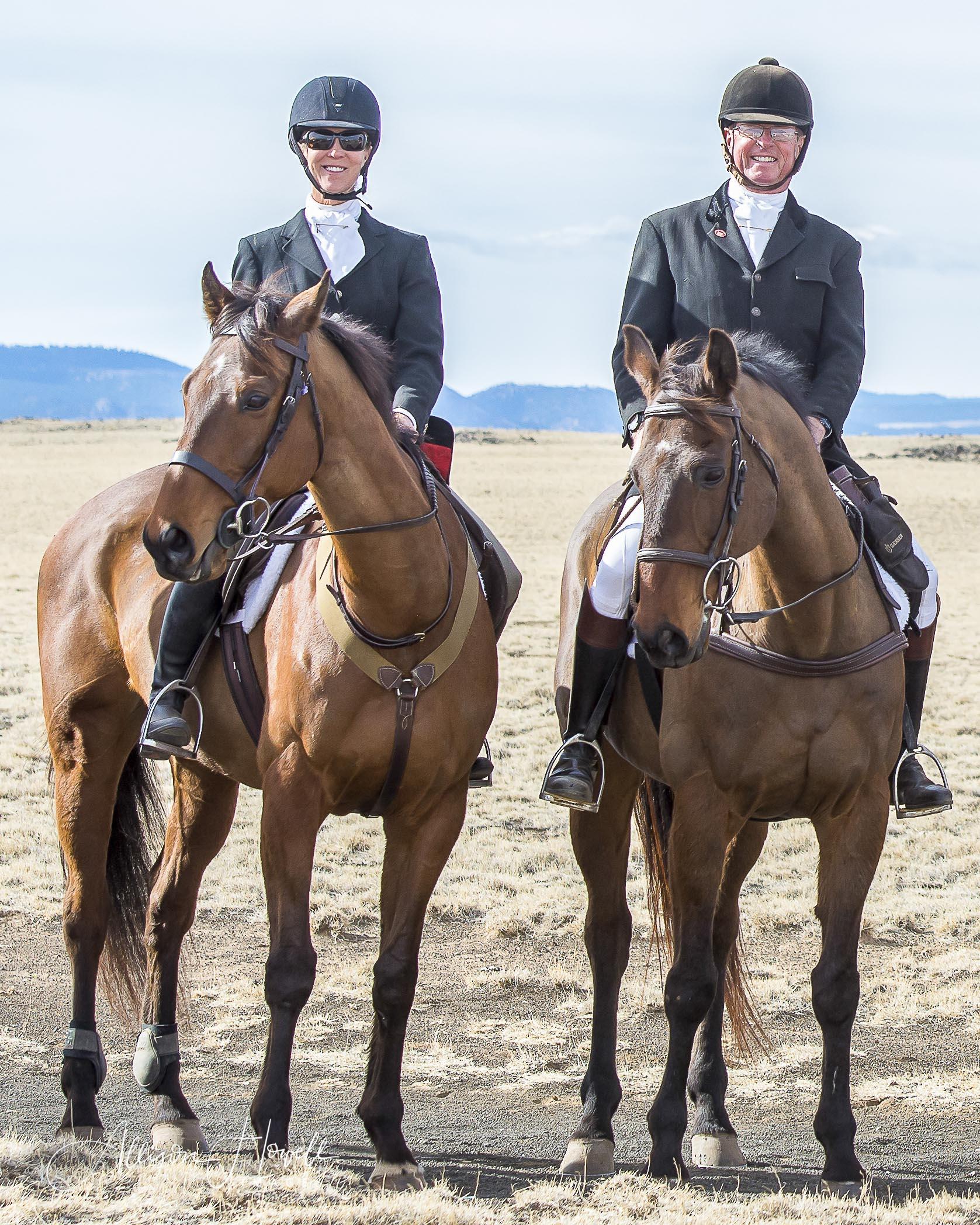 Judith on Flyer with Epp. Photo by Allison Howell.

We came out of the woods in the vicinity of the Old Red Barn and turned left onto the firebreak road around the clear cut beyond Quaker Cemetery. We were galloping after hounds and came upon a tree that had fallen across the firebreak road. It was a dead cedar, with naked branches giving the obstacle substantial height and depth. Epp’s Trebajo sailed over it beautifully. My brain, perhaps still operating at less than full capacity due to the concussion, was looking for a way around. Flyer, however, had other plans, and absolutely ROCKETED up and over that tree, taking both a long and high line, steeplechase style. It happened so fast – or my brain was moving so slowly, or maybe both – that I got left behind. It was another Wile E. Coyote moment for me, and I’m putting this one on Epp. HAHA!! Just kidding!

I guess the adage, “It’s never the horse’s fault”, is true!