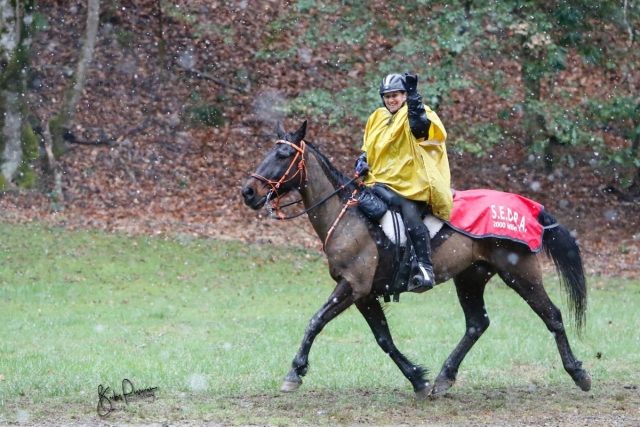 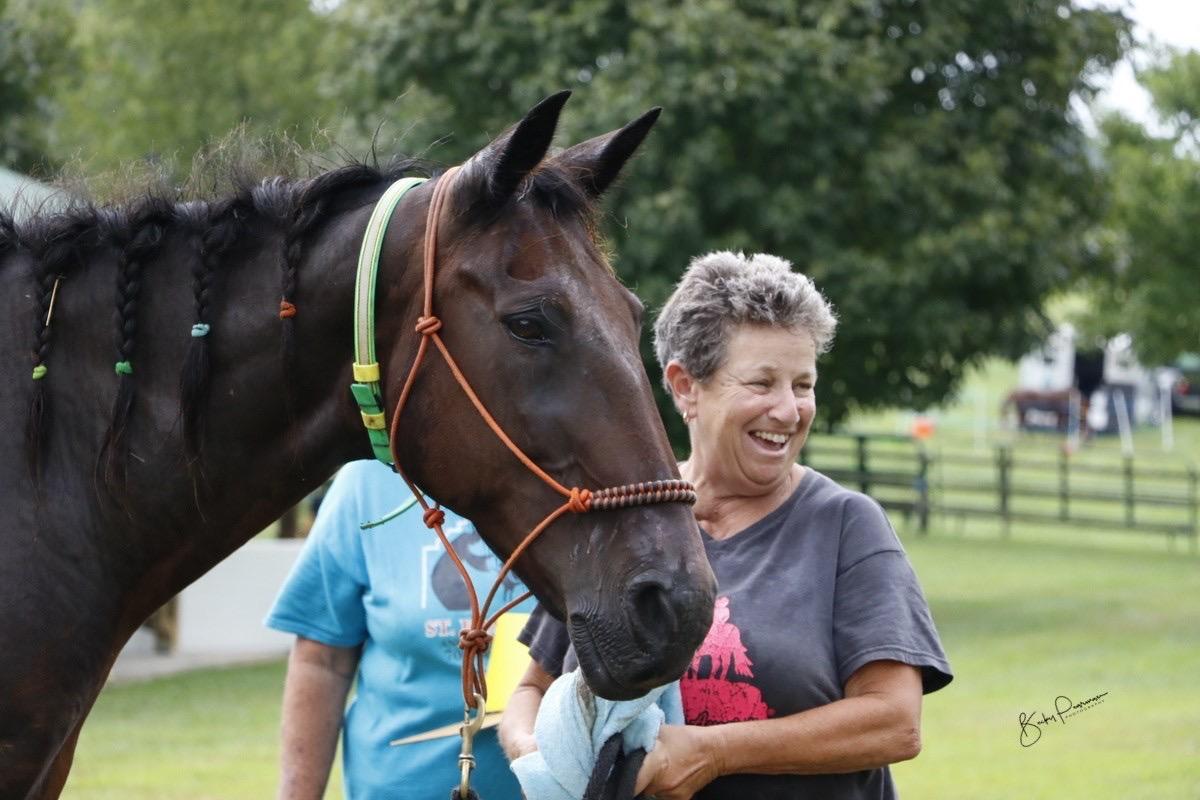 Anita’s first memory of Standardbred horses was riding with her friend Linda in a homemade jog cart on a logging road. They were driving a seven-year-old gelding who didn’t have much of a career on the track, but was the fastest horse she had ever handled. She loved how quickly he’d move from Mach 1 to a slow jog. Throughout much of the 70s and 80s Anita rode Standardbreds and Morgans. In the 1980s Anita started to do competitive trail rides on her Arabian mare and in the 1990s she shifted to competing in endurance and completed several 50 mile and 100 mile rides. For about 14 years she took a break from endurance rides, and focused on trail riding for fun and competing in dressage on her Anglo Arabian gelding.

About 10 years ago Anita acquired her first Standardbred. She currently owns six Standardbreds, five of whom are off the track. The sixth is Shag, a homebred, unregistered Standardbred gelding, with whom Anita has been competing in 50 mile and multiple day endurance rides for the past four years. Shag is 17-years-old and before he ended up with Anita he was competing in speed racking and extreme trail riding. Anita bought Shag as a speed racking horse, but she decided to switch to endurance when she realized just how fast he truly is. Anita describes Shag as extremely competitive and said that she tends to keep him alone on rides to keep him focused on his own race. 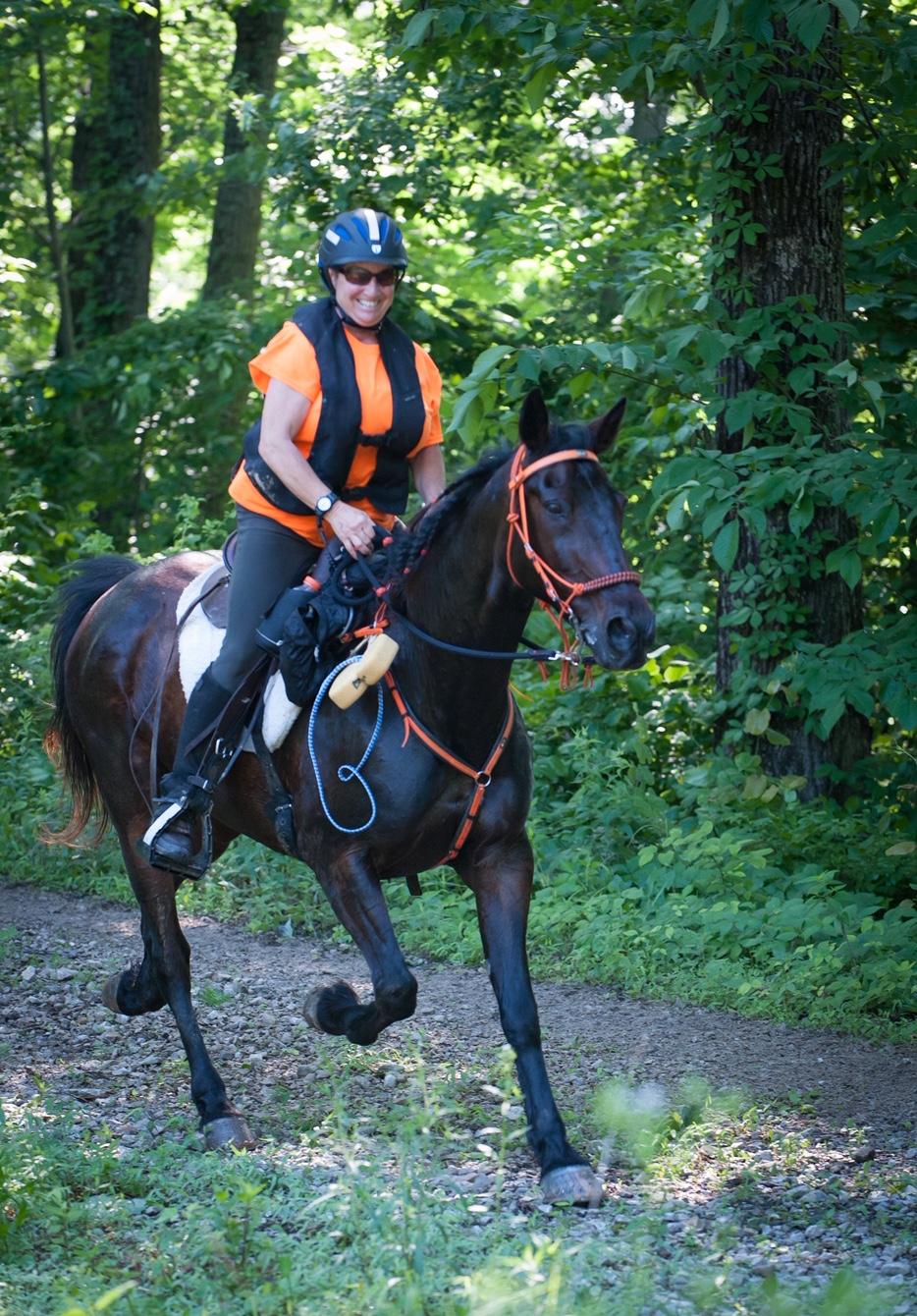 Anita has currently been struggling with deciding whether to retire Shag from competing or not. He has a ton of heart and is never tired at the end of his rides, but he has a crooked right front leg. He tore a tendon in June of 2018 and had a year off. After his rehab, Anita took him to back to back limited distance rides in August of 2019 and he ended the second day sore on his right front. The tendon ultrasounds were clean, but he had developed arthritis in his fetlock joint. Anita had his fetlock injected and Shag is on monthly Adequan, but on their last ride he was sore after 40 miles. 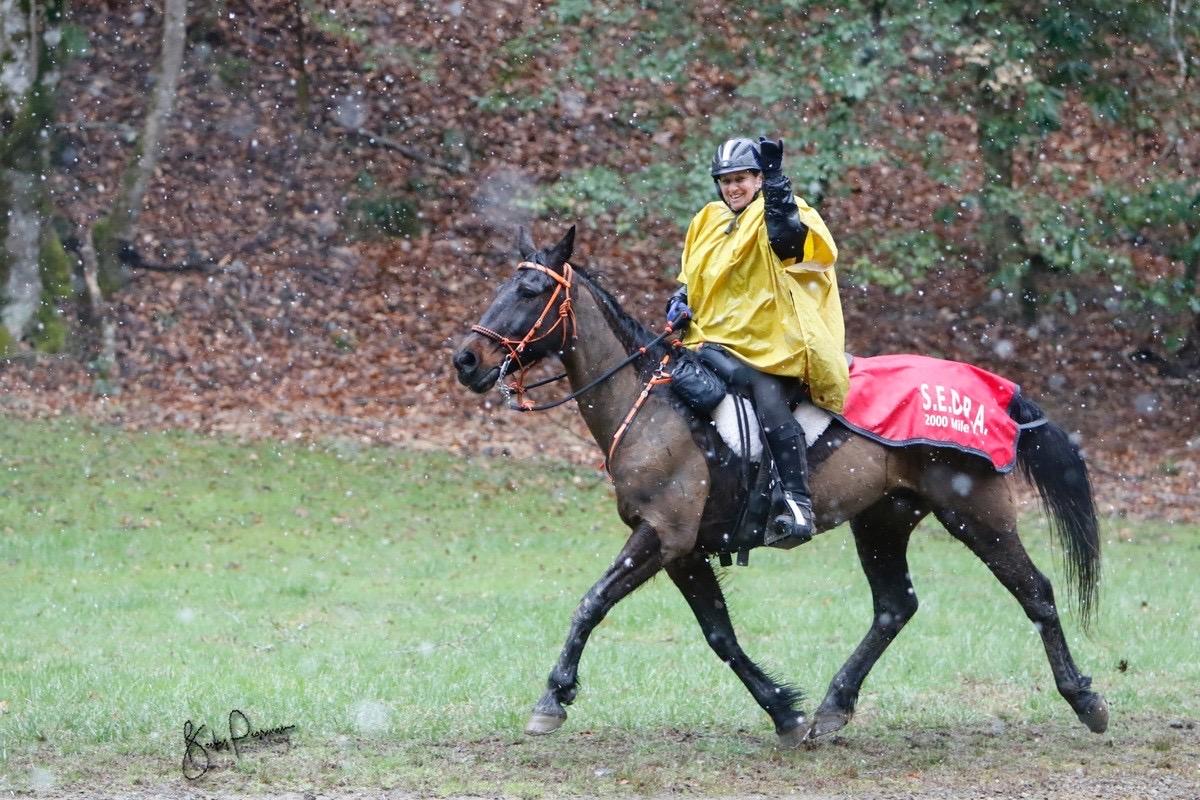 While Anita struggles with the decision about whether or not to retire Shag, she has been bringing along a five-year-old Standardbred named Bubba. Bubba will do his first 25 mile limited distance ride this spring. Bubba’s registered name is Jailhouse Waylon, and he was retired from race training after being injured as a two-year-old. Anita adopted Bubba from Starting Gaits Transition Program in Ohio. Anita describes Bubba as being calm and level-headed. She has taken him camping and on long trail rides and thinks he will take well to endurance riding. 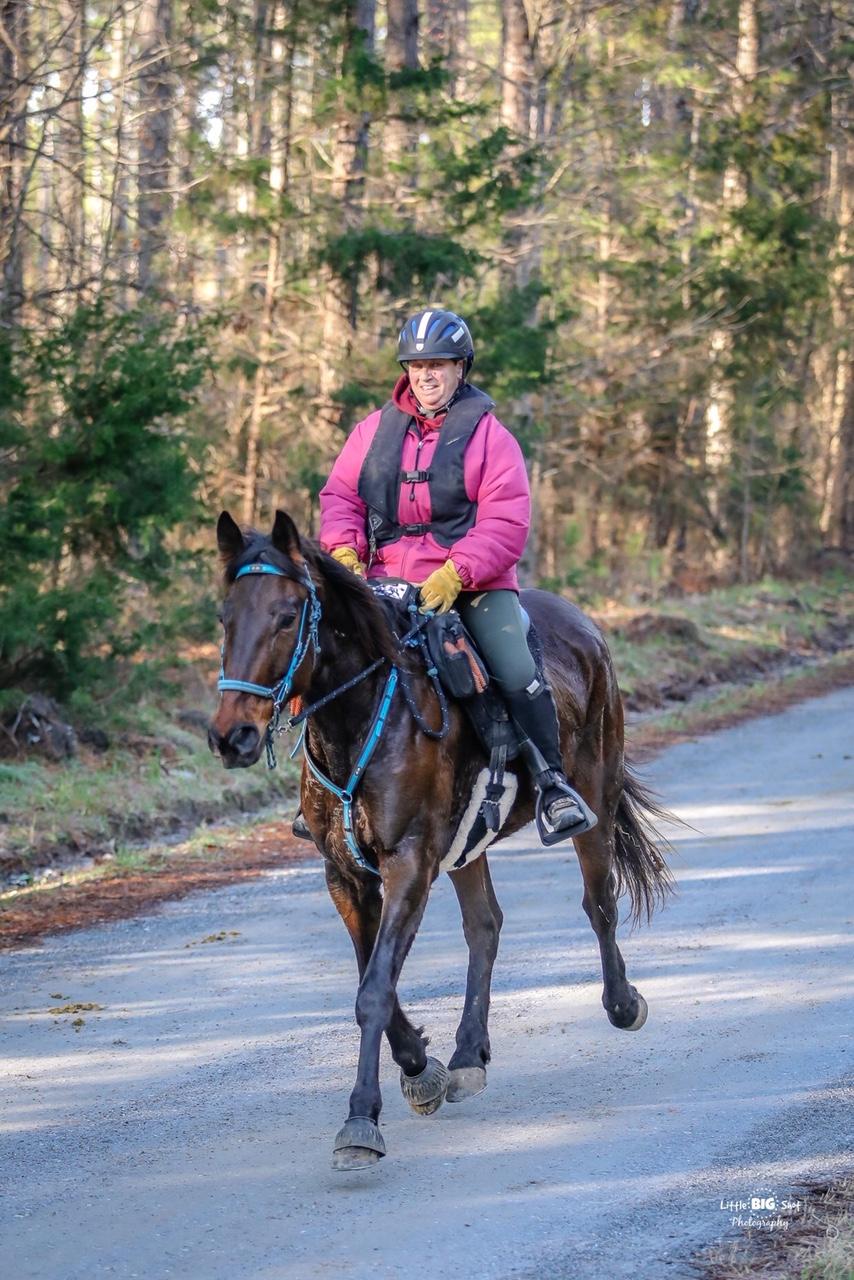 Anita with Bubba at his first ever LD, this past weekend. Photo by Little Big Shot Photography. 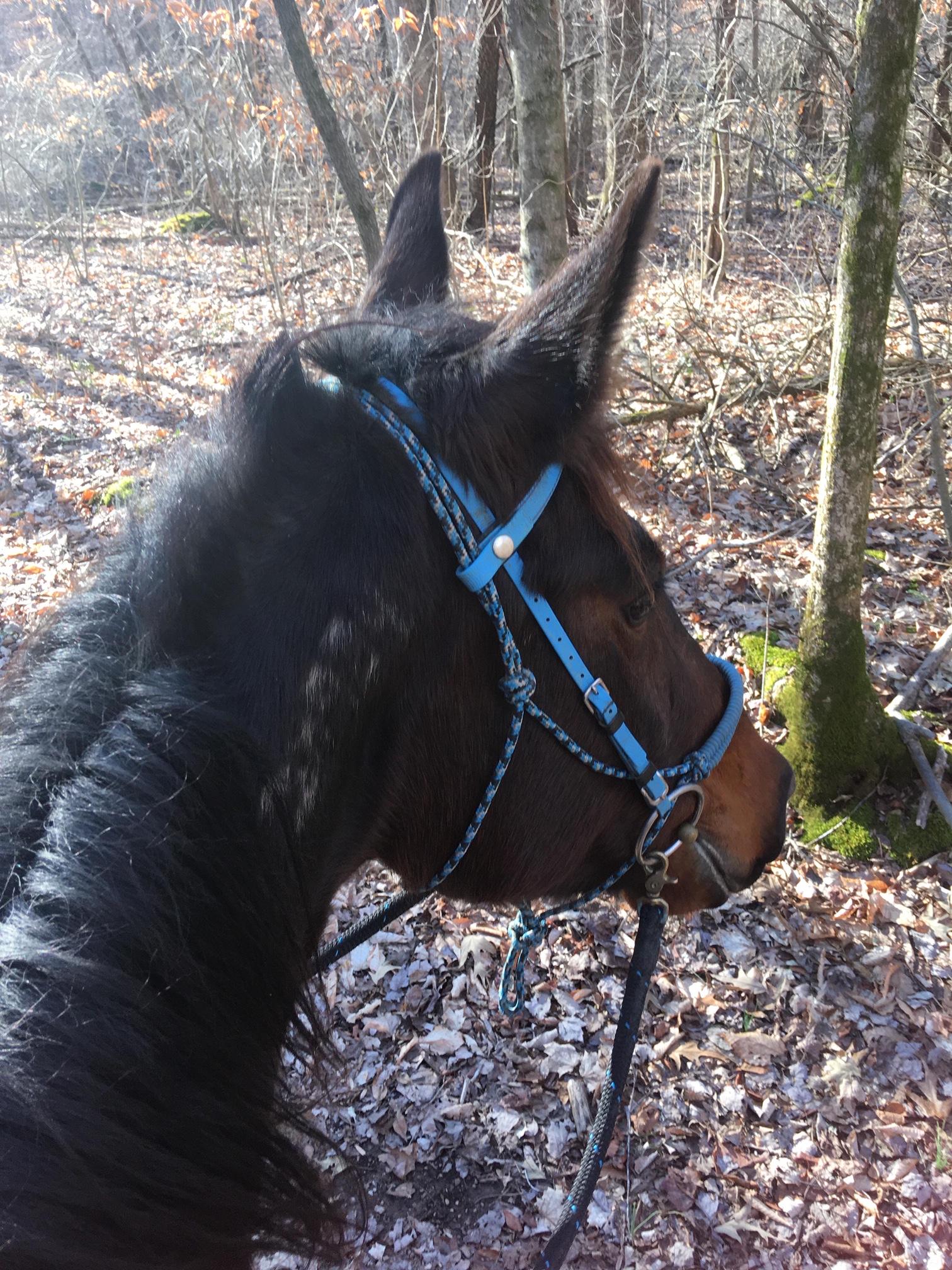 Anita’s favorite thing about Standardbreds is that they are physically and mentally tough. One of her Standardbreds, Hula Lu, had 320 starts on the track and retired sound after over eight years on the track. Even though Hula had no off track experience when Anita got her within a few months she was trail riding like a champ. 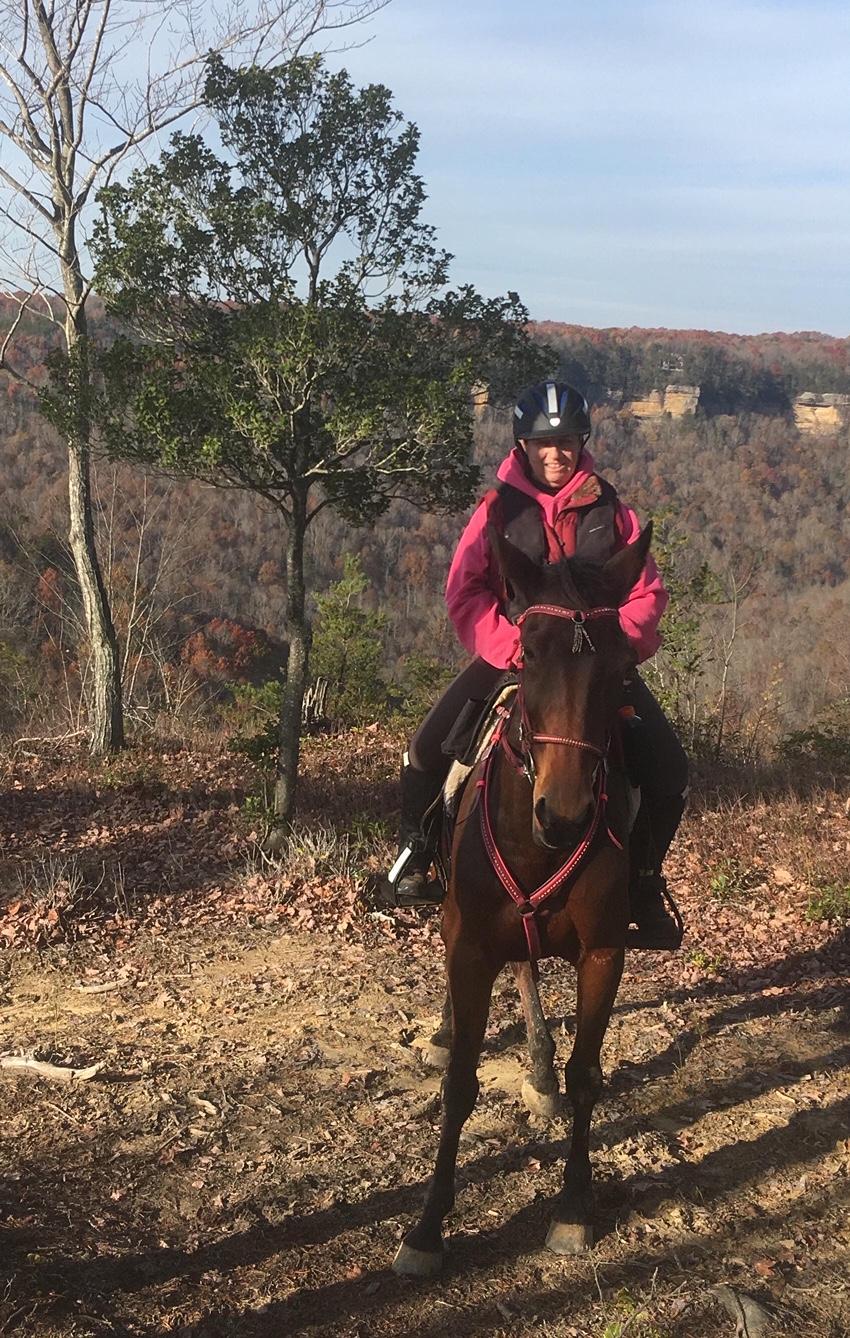 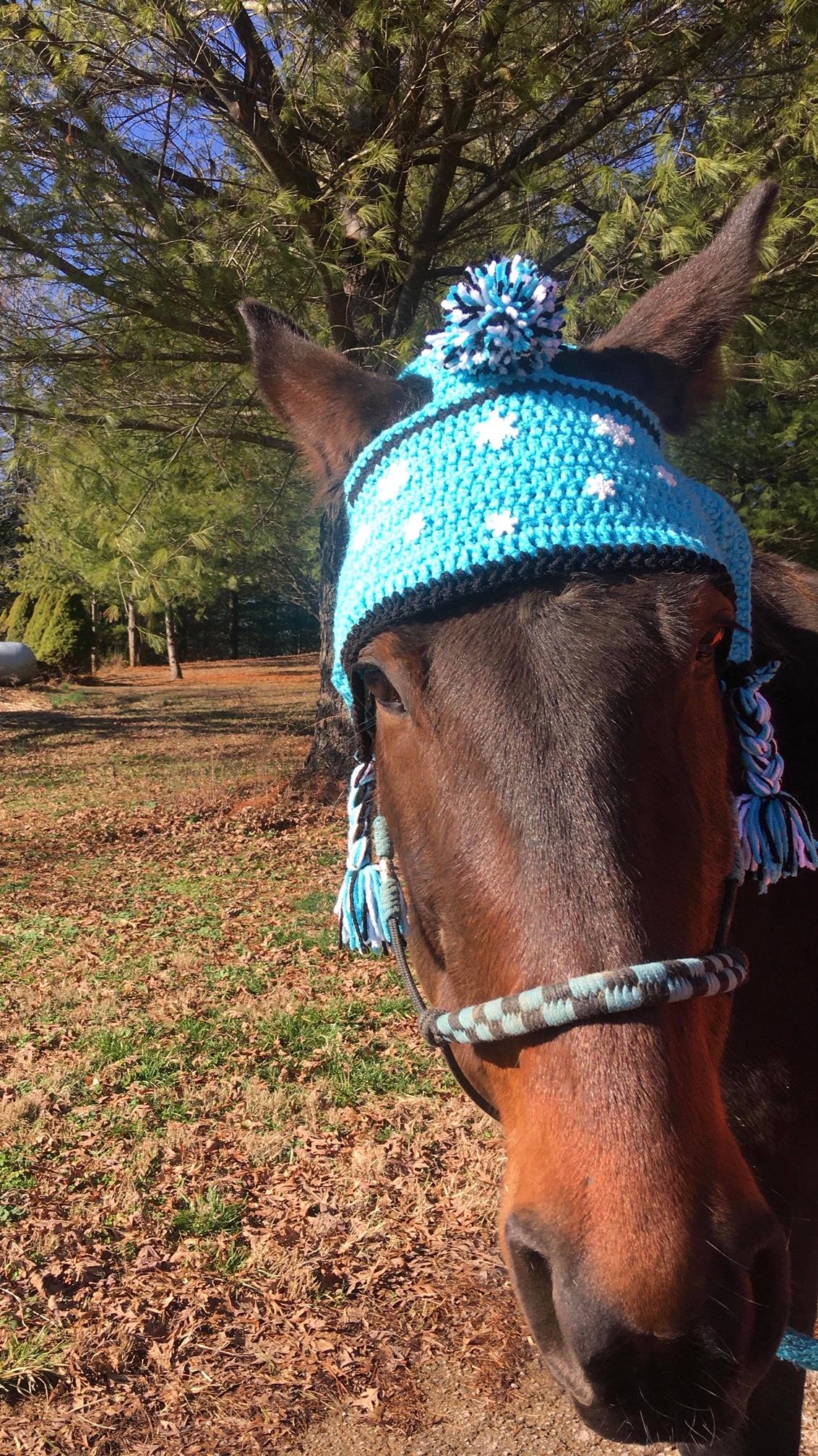