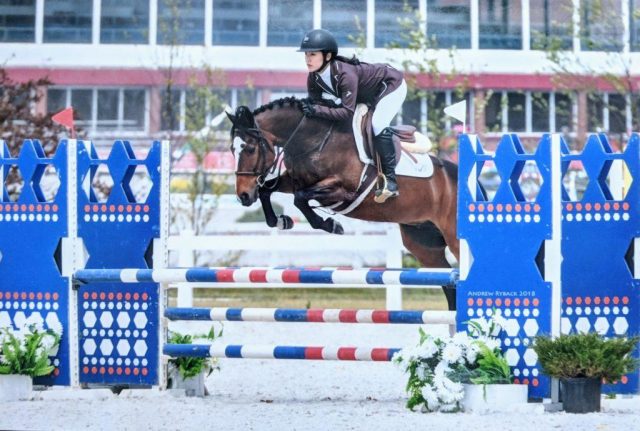 March 6, 2020DeAnn SloanLynn MuellerBest of JNComments Off on Best of JN: Turning the Next Page: Joining the Nation Media Team as Editor

The Nation Media family welcomes a new member — Lynn Mueller takes the helm as the new editor at Jumper Nation.

It was a typical Tuesday when, like clockwork, the Eventing Nation daily newsletter popped up in my inbox. I’m a former eventer who used to eat, sleep, and breathe cross country. With a prior horse, I had a rotational fall at a down bank that left both of us mentally scarred. I ended up carrying some of that mental baggage over to my current mare, and the anxiety started hurting us on cross country. Three years ago, I decided that it would be safer for both of us to switch disciplines to showjumping — a decision where we ended up thriving. I became more ingrained in the likes of a new set of favorite jumper riders and sites such as Jumper Nation. I never did completely leave the eventing world behind, though, thanks to the camaraderie of the sport, and I still keep up with happenings and favorite riders around the nation. Hence, the Eventing Nation newsletter still holds a near and dear place in my inbox.

A particular line in said newsletter caught my eye. Jumper Nation, one of Eventing Nation’s sister sites at Nation Media, was looking for an Editor. I was intrigued as I’d long harbored the writing bug and at the time had a release fast approaching for my second book on mental health awareness. Being involved in both the editing/writing and equestrian worlds would be a truly special way to combine both passions — not to mention that I’d always been a fan of Jumper Nation’s style, both in writing and aesthetics. I typed up an email to inquire about the role and hit “send.”

A series of conversations with the Nation Media team followed. Conversation flowed easily, a rarity in some of today’s social encounters. Maybe it was because we’re all equestrians at heart, or maybe it was because the Nation Media team is simply comprised of some of the most dedicated individuals I’ve met. Accepting the offer to become Jumper Nation’s new Editor felt like I’d at last found my niche. I’m an adult amateur through and through. I started riding when I was a little kid, taking lessons once a week in my soccer uniform and a borrowed helmet. My parents had simply wanted me to become more “well rounded” with my sports repertoire. The horse bug bit, much to their chagrin (as we all know that horses can be very expensive). It took me three years to learn how to post the trot because “up, down” was harder than “up, down, up, up, down, down,” but any time spent on the school horses at the stable was well worth it.

When I was 10 years old, I became a working student and learned how to wrangle ponies and Pine-Sol an entire barn to make the wood shine. I wasn’t able to afford my own horse until I was in my mid-20s and showed up (possibly unwisely) at Hawthorne Racecourse with a trailer, poking around asking random trainers if anything was for sale. I brought my “heart horse” home on that same day. He’s been gone for five years now, but I still miss him.  My current mare is a former racehorse, as well. I call her my “wild woman” because now that we do the jumpers, she is always itching for a jump-off…even if we’re at home doing ground poles.

Like the rest of us in the equestrian world, I’ve shed plenty of blood, sweat, and tears (quite literally) over my horses. Sometimes when (not if) I wind up in the dirt, I wonder why we even do this every day. I’m in awe of the glittering lights at the big horse shows but also enjoy just hacking on the trails and going to visit the neighboring cows — maybe even more so than the shows at times. Thank you to John, Leslie and Meagan for our reflections on where Jumper Nation can (and will!) go. There is a TON to look forward to. Also, please join me in sending outgoing Editor, Meagan, the best of wishes in her next life chapter as she moves on to Phelps Media. I have no doubt that she will be a stunning asset to her new team.

I’m thrilled to join the Nation Media team and hope to truly grow our hunter/jumper community. After all, we’re all in this together: Amateurs, professionals, and everyone in between. We’re horse people.