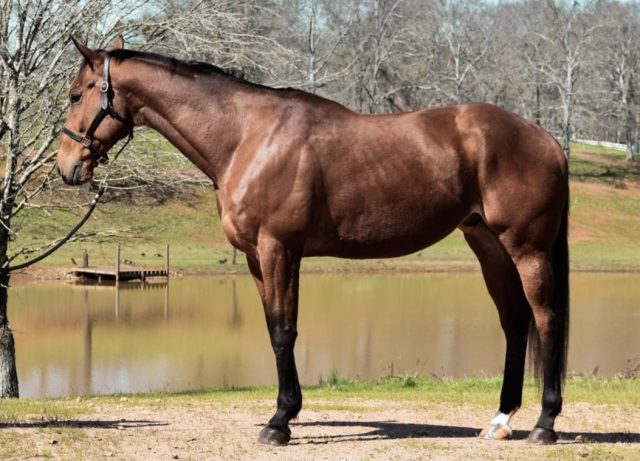 “For the past two years, my RRP personal entries … have been young, lightly raced, red, and well… hot. Boomer, an elegant, 17.1 hand, 2011, big-boned bay was anything but what had become known as ‘my type.'”

For 616 accepted trainers, the journey to the Retired Racehorse Project‘s 2020 Thoroughbred Makeover and National Symposium, presented by Thoroughbred Charities of America, has begun! Over the next eight months, four of those trainers will blog their journeys, including their triumphs and their heartbreaks, successes and failures, for Horse Nation readers. Today, meet blogger Aubrey Graham.

While in Lexington for the Retired Racehorse Project’s (RRP) 2019 Makeover, there was only one thought causing me to hesitate on my purchase of a potential 2020 horse. “Boomer” (JC name: Vanderboom Ridge) was quiet. For the past two years, my RRP personal entries (for Eventing and Show Jumping) have been young, lightly raced, red, and well… hot. Boomer, an elegant, 17.1 hand, 2011, big-boned bay was anything but what had become known as “my type.” 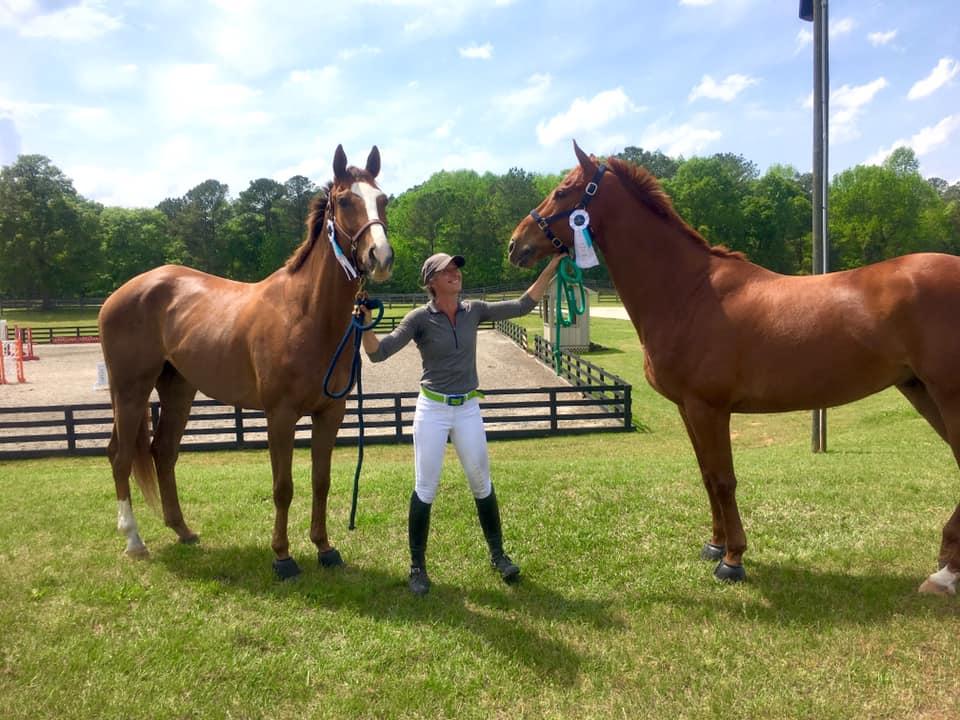 Forrest (JC: Don’t Noc It; purchased from Jessica Redman/Benchmark Sport Horses) was my initial reason for entering my first Makeover in 2018. Even as a four-year-old, his sloping shoulder and powerful hind-end screamed upper-level potential. Age didn’t stifle personality though; the stout redhead quickly earned himself the nickname “the drama llama.” Fortunately, he balanced out his athletic antics with a goofy, intelligent, and somehow massively lovable demeanor.

At our first show, we lapped the grounds bouncing between two and four feet – but once in competition, he settled and got down to business. 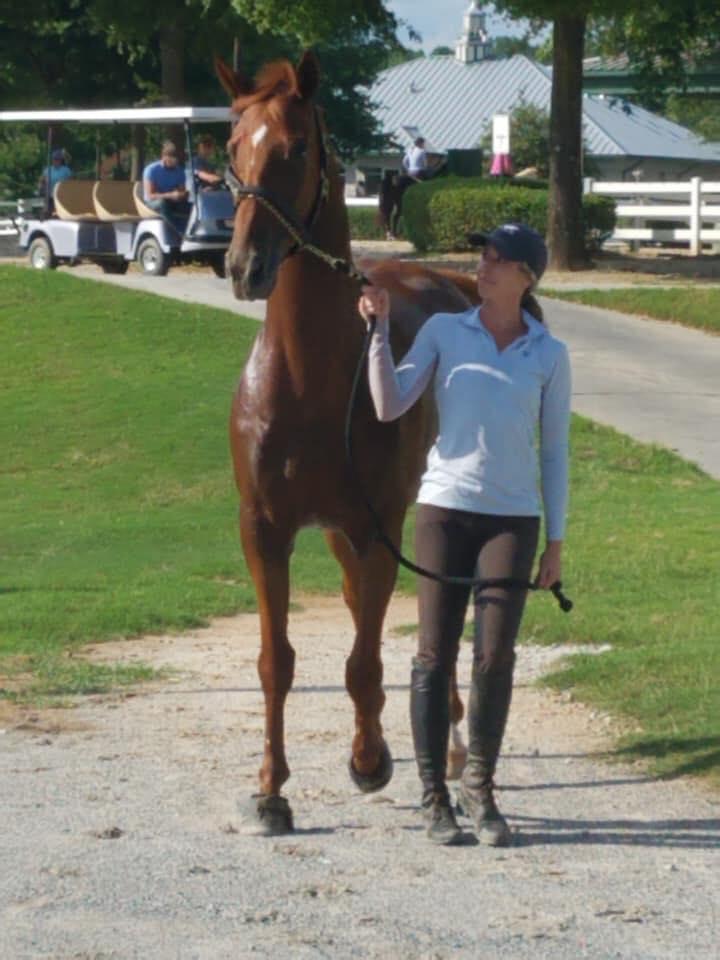 In the Makeover, he did exactly that, laying down a lovely ride in his Show Jumper class, good enough for a 10th place finish. Two years later, Forrest still earns side-eyes and gasps in the warm-up, while I just laugh at him and keep my heels down as far as possible. 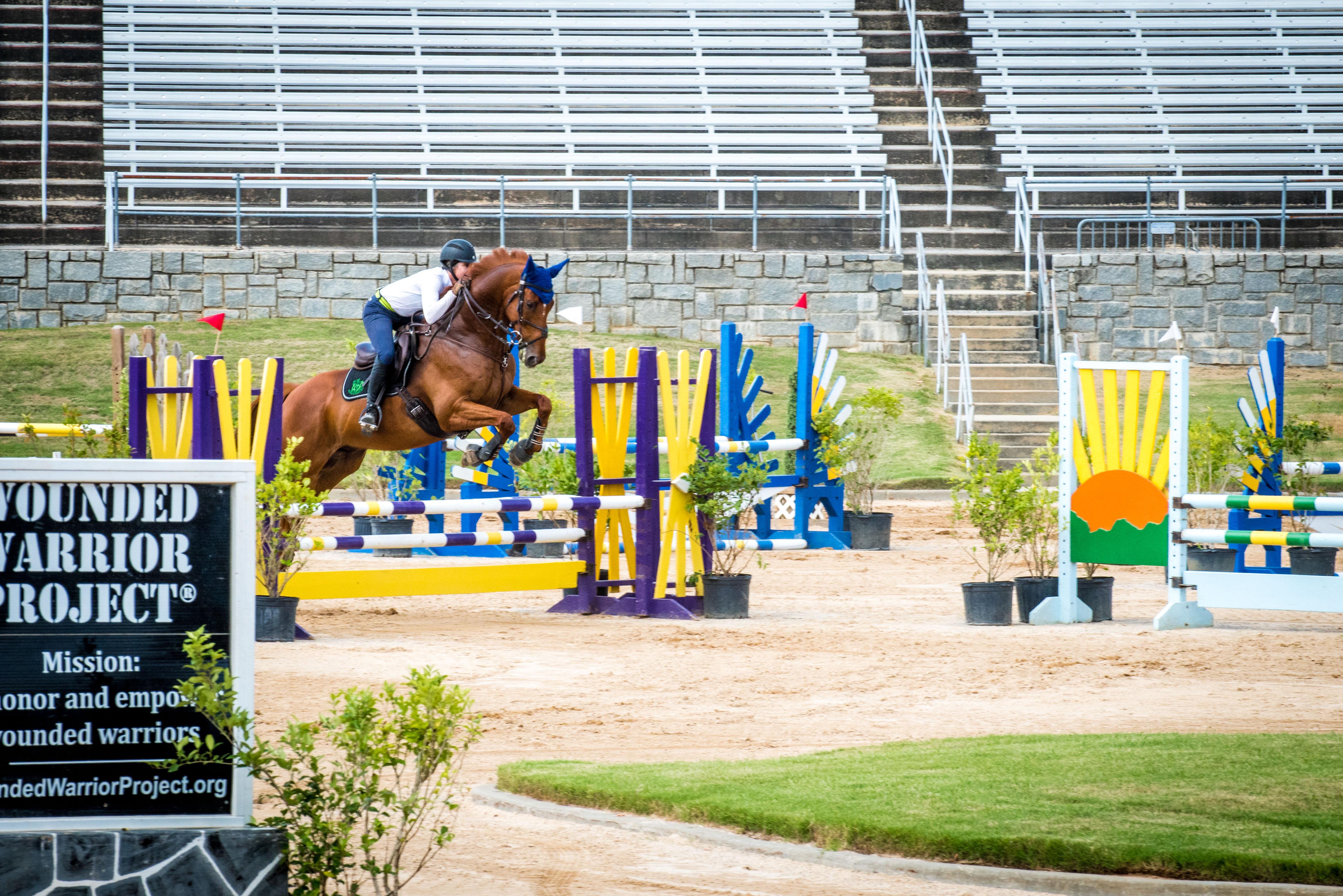 Forrest on course in the 1.0 meters at HJFox Classics in the Georgia International Horse Park Grand Prix Stadium in 2019. Photo by Alanah Giltmier.

Juice (JC: Pulpituity), my 2019 Makeover horse, was similar. I bought the lanky three-year old chestnut from Kelly Lupton and Turning for Home somewhere between deplaning after an anthropology conference and baggage claim. There was something about the gawky horse with the big blaze that warranted swift action. When he arrived at the barn where I was then boarding, photographer Nikki Sherman’s photos soon followed giving me a glimpse into his extremely short racing career. 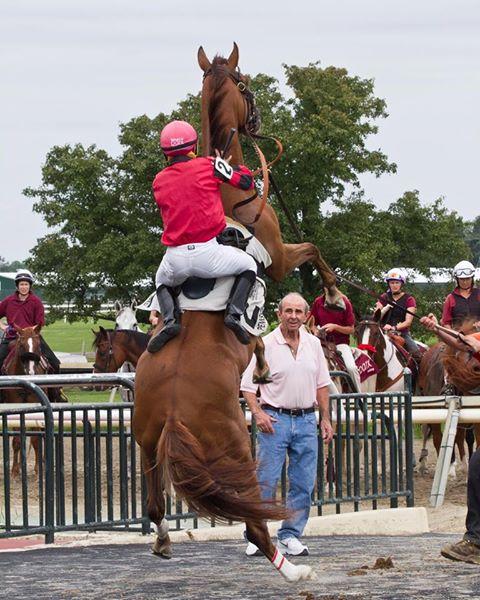 Pulpituity acting up during his only race in 2018. Photo by Nikki Sherman. 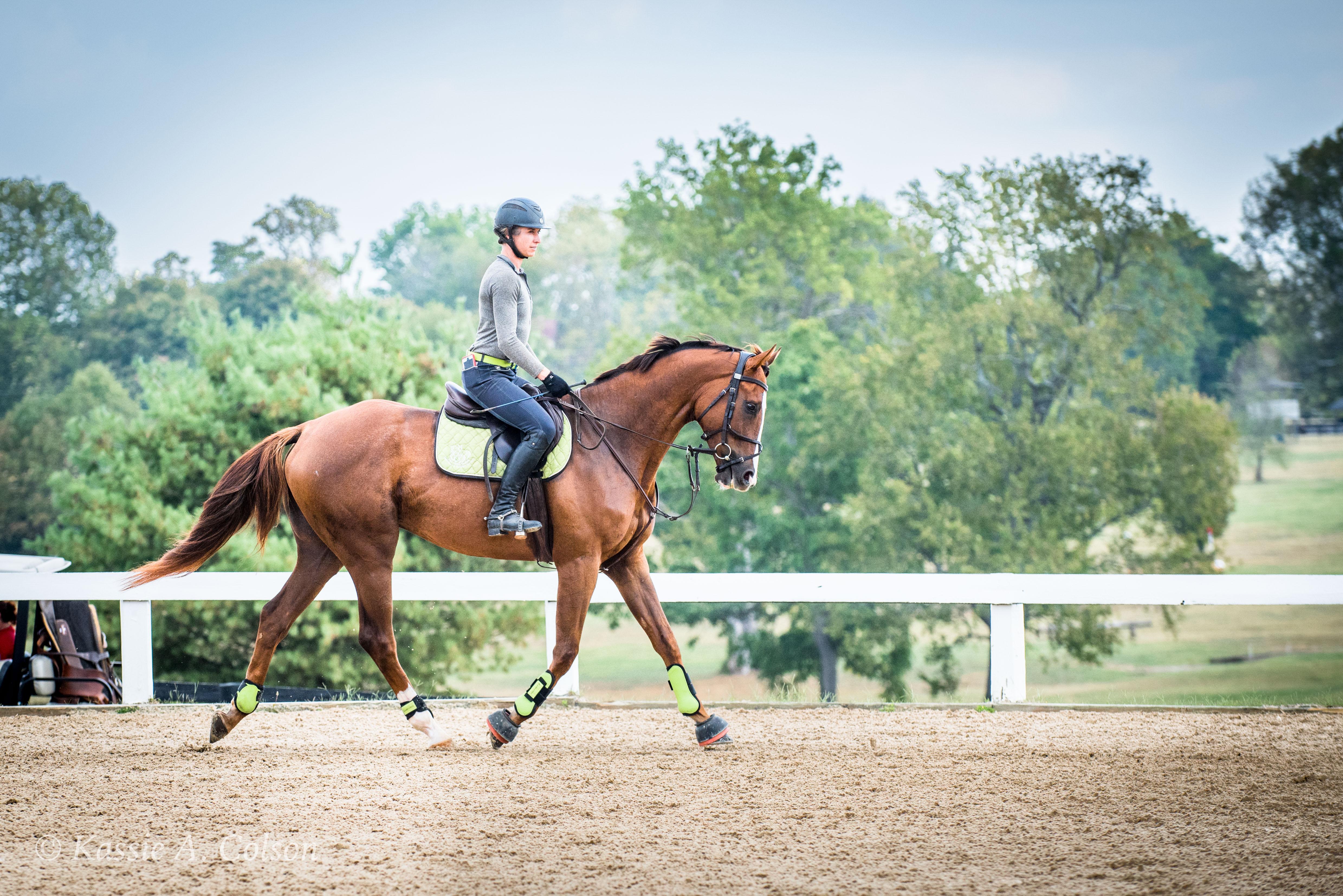 Juice schooling at the 2019 RRP Makeover. Photo by Kassie Colson.

As they headed to their respective Makeovers, both Forrest and Juice were unquestionably brave, but equally, both needed to move their feet to keep their brains in proper working order. Hence my surprise when Laura Newell of Winchester Place Thoroughbreds, pulled Vanderboom Ridge out of the field. Having been retired for six months, Boomer was ribby and lacked muscle, but that wasn’t what made me pause.

Rather it was that he stood quietly while I ran my hands over his legs, admired his substantial build, and generally poked and prodded. Kind, quiet, composed, and not red? What was I thinking? Halfway back to the horse park, I decided to make the gamble and called Laura. As Juice rested up from a respectable finish (14th in Eventing and 17th in Show Jumping), I vetted Boomer (he passed with flying colors) and headed home to Georgia with a full trailer. 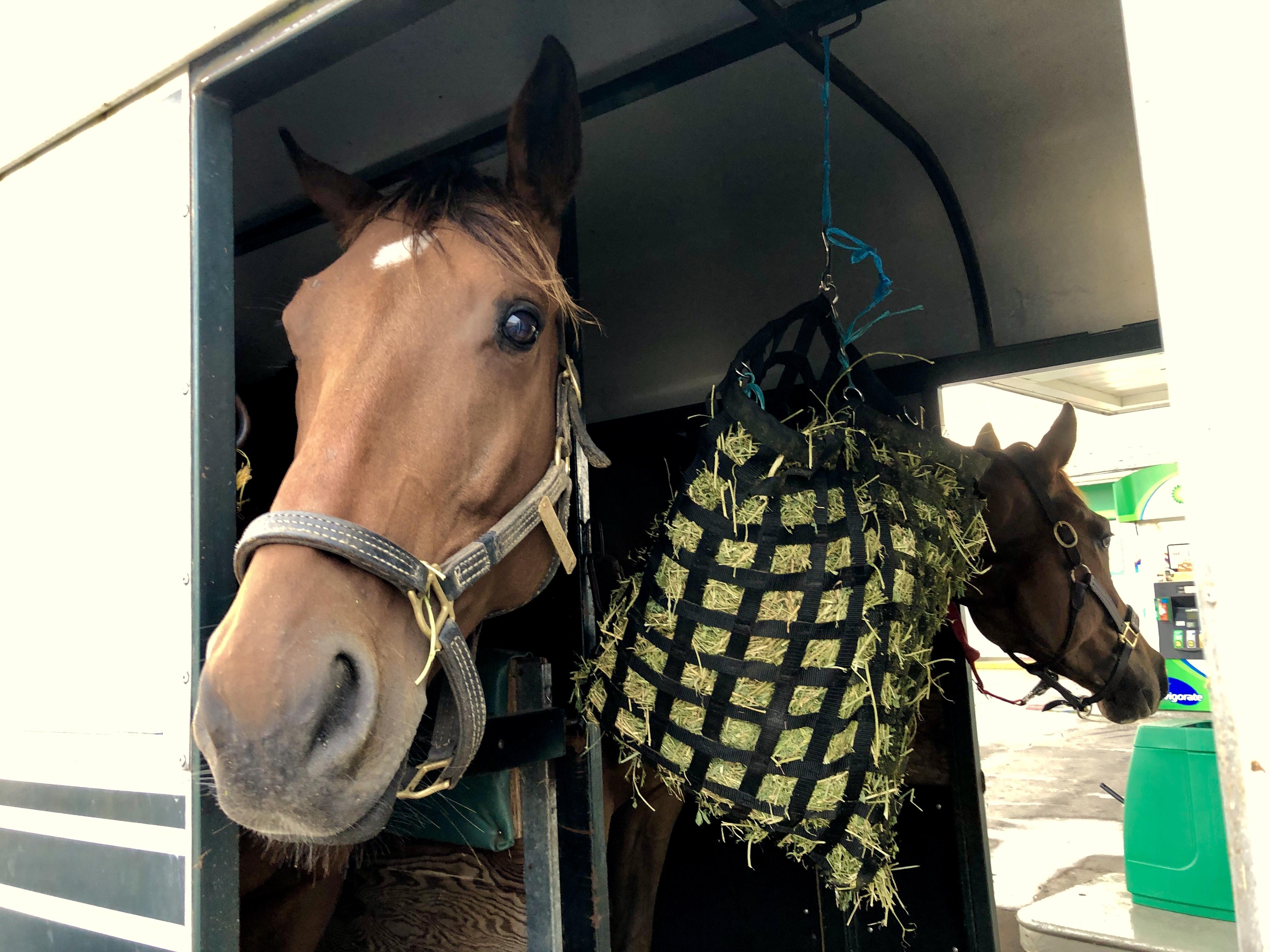 Boomer and Juice heading back from KY to GA. Photo by Aubrey Graham.

By the time Boomer came into my life, I had left academia to train full-time. While I have trained hunter-jumper and eventing horses professionally for years as a sizable side-gig, in 2019, I made the decision not to apply for further professorial positions and instead to make my passion my primary job.

My love of the little successes within the retraining process as well as the amazing support of the fellow RRP Makeover trainers helped me take the leap into full-time horses. I haven’t been happier and haven’t looked back since. My barn, Kivu Sporthorses & Training (named for the provinces where I conducted my PhD research in Eastern Democratic Republic of the Congo), now sits immediately across the fence-line from where I used to board. The fields and stalls brim with young, green, and goofy Thoroughbreds (as well as a couple of Irish Draughts and the like) and Boomer fits right in. 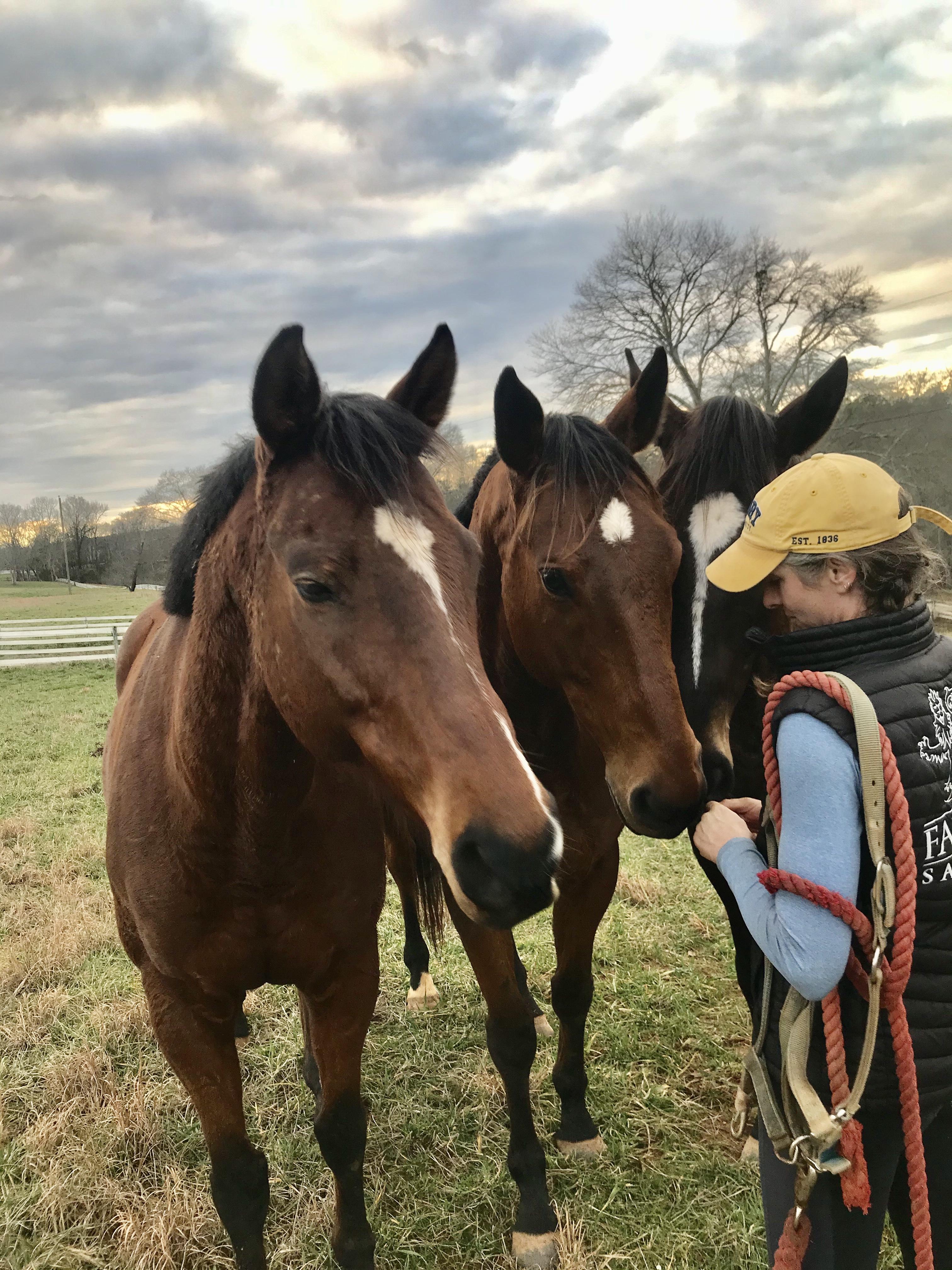 Luc, Boomer, and Lincoln jostle for peppermints in the field. Photo by Greg Lyon.

With most of my off-trackers, I start on the ground. I teach them to lunge first, not to “get the energy out” but to listen, brake quietly and make careful, voice-controlled transitions. From there, I move to in-tack riding, progressing forward to establish trust, rhythm, straightness, and contact. Each horse sets a different pace as we head toward bravely tackling obstacles, such as streams, jumps, ditches, tarps and the like. 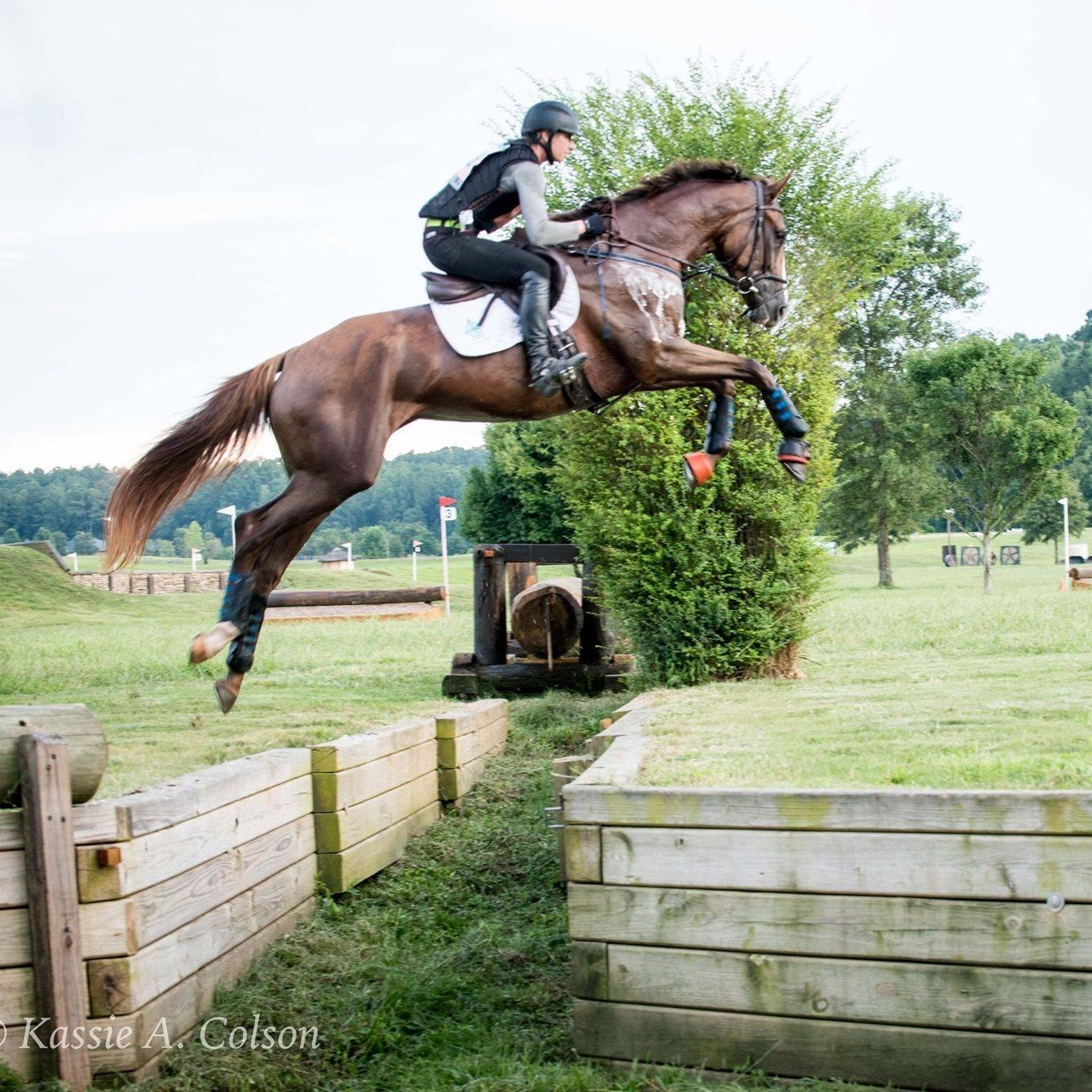 Juice learns how to fly over ditches. Photo by Kassie Colson.

With Boomer, this in-hand work was able to move along quickly. Unlike Forrest and Juice, who had minimal racing experience and washed out young, Boomer ran 49 times, making over $130,000 (for comparison, Juice earned a grand total of $250 and Forrest $1080). He was as professional in the tack as he was on the ground – complete with the classy, stoic air of, “Really, human? I’m pretty sure I know what I’m doing.” 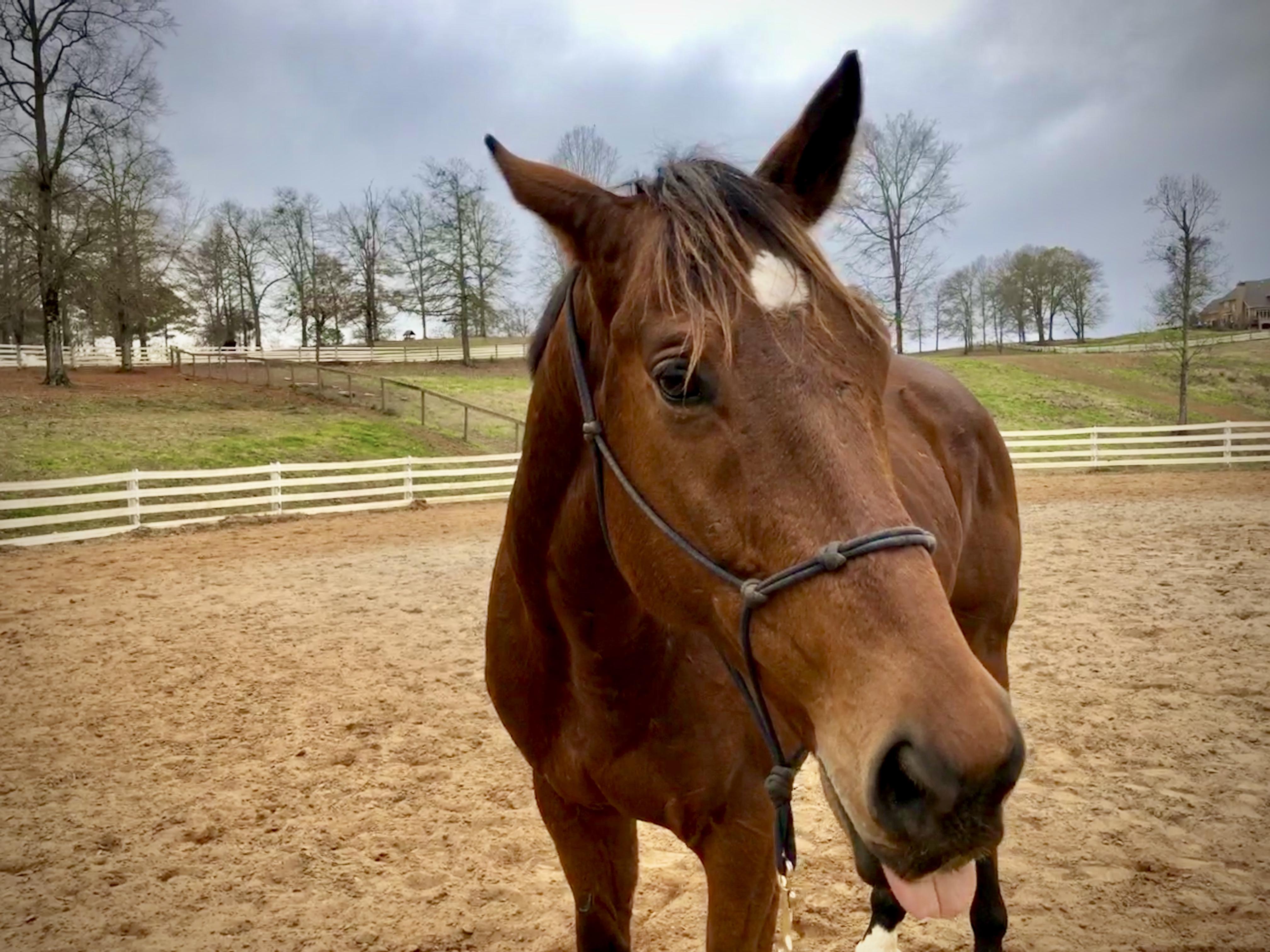 Boomer is entirely unimpressed with groundwork: Photo by Aubrey Graham.

Fancy gates showed out from underneath the ribbiness, and the fitter and fatter I got him (shout out to Madbarn for their awesome nutrition), the better he got. My first under-saddle ride probed his potential – and I grinned at his balanced uphill canter on both leads. This, I thought, was going to be a lovely walk (er… gallop) in the park. Kassie Colson, (a friend and the next-door barn manager) videoed the ride, noting, “I’d even almost ride him.” Kassie is a hunter and while she claims to love my redheaded eventing goobers, she has absolutely zero desire to ride them. Her comment consolidated what I had suspected about Boomer: He was sane and calm. I squinted at him and wondered how we would get along in the long run. 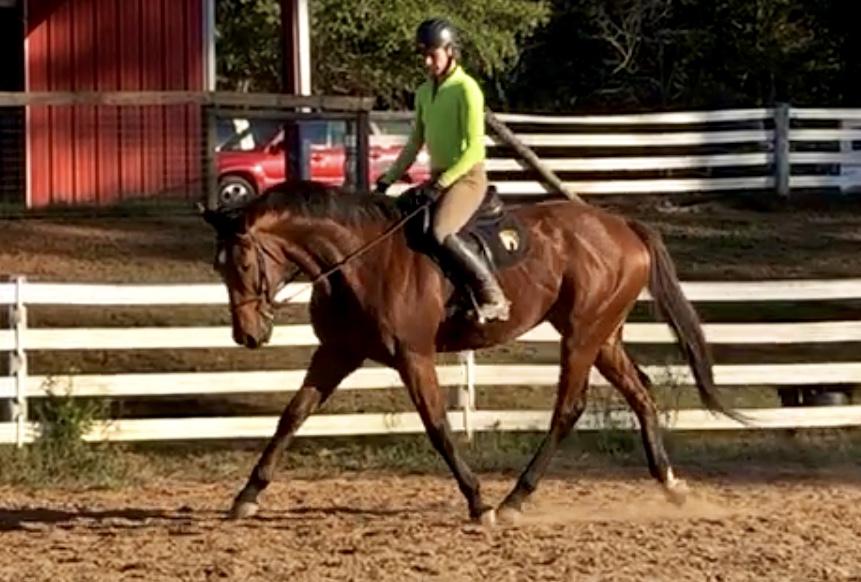 On perhaps his seventh ride, the rain had been impressive, my arena refused to drain, and I headed out to my only dry field – about a ½ mile from the barn and his pasture-mates. We trotted gamely along the farm roads and into the sizable green expanse. Near the main road, I asked him to halt to praise his impeccable manners. Acutely feeling the distance from his friends at feeding time, Boomer froze. I knew I was in trouble from the energy traveling up through my legs and seat-bones. As I asked him to walk off, he exploded. All 17.1 hands of him worked to remind me of the job he knew far better than this quiet hacking business. As I fought to contain his outstandingly catty athleticism and keep myself in the saddle, I couldn’t help but grin through the adrenaline and think, “Well now, perhaps you will be amazing on cross country, after all.” As we trotted to regain composure and make sure we didn’t inspire any rubber-necking car crashes, I patted him. 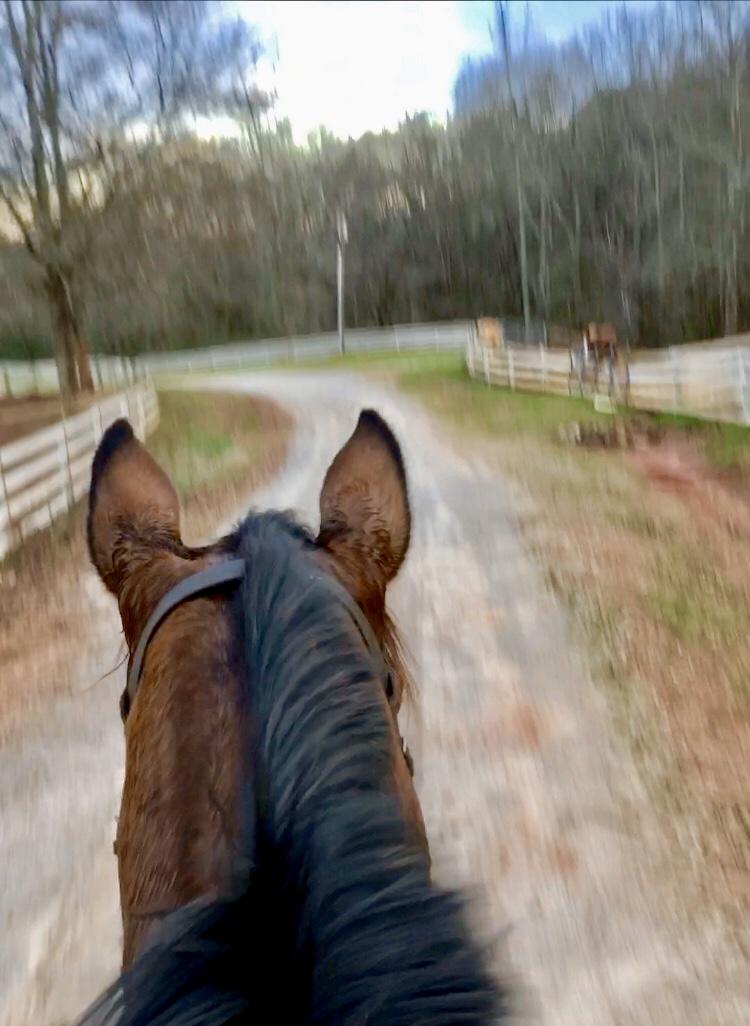 Boomer comes back from the far fields. Photo by Aubrey Graham.

While he is quiet 95% of the time, there’s an outrageously talented athlete sitting just below that calm demeanor. He might not be red and, unlike my other goobers, he might not need to remind everyone ALL THE TIME that he’s powerful, goofy, and capable, but Boomer just might also be my type after all. 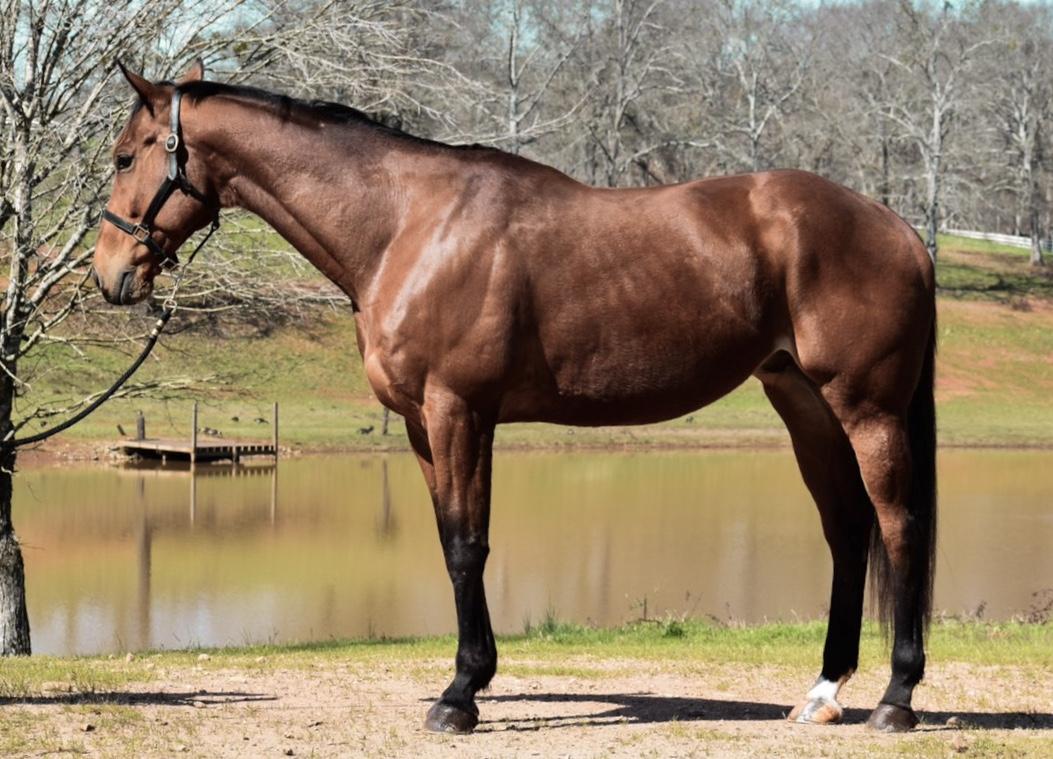 Aubrey Graham is an Anthropologist and eventing/hunter-jumper trainer located just south of Atlanta, in McDonough, Georgia. Based out of a farm built for the 1996 Olympics, she runs APGraham Eventing and Kivu Sporthorses & Training. She parlays her 30+ years of riding experience into training students and working with young, green, and challenging rides, but her passion lies in the retraining of the off track thoroughbred (OTTB). Aubrey has competed through preliminary level eventing and keeps her eyes on the upper levels while enjoying the small successes that come from getting the green horses ready for lower-level competition. In 2018 and 2019 she competed in the Retired Racehorse Project Thoroughbred Makeover with both personal and client horses; this year for the 2020 Makeover, she plans to enter two OTTBs.
Tweet