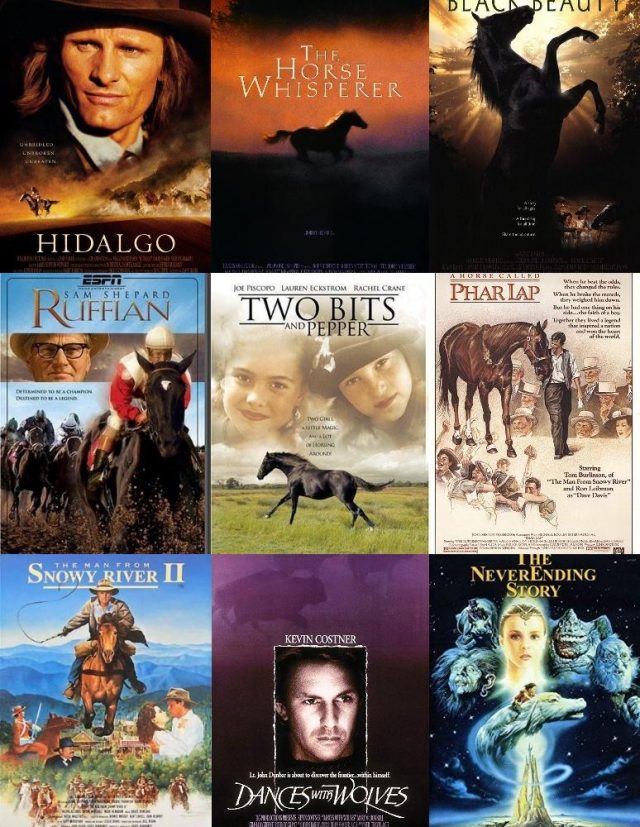 We love horse movies… and movies with horses in them. Until something bad happens to the horse.

However, for every free running, exhilarating moment we lived through vicariously, there was an equally devastating and — let’s be honest — downright traumatizing moment we had to endure to get our big screen horse fix. Here are nine movies that scarred us for life because of what happened to the horses.

Warning: We’ve included some YouTube clips of the scenes. We don’t actually recommend watching them unless you’re in the mood to ugly cry.

9. Two Bits & Pepper. Although this is a mostly fun-loving movie about two best friends who want nothing more to ride a horse (Pepper) and pony (Two Bits) into town, there’s still a scene that makes us shudder. The low-down dirty kidnapping thugs try to scare Two Bits by shooting in his general direction, but inadvertently hit the pony. Although Two Bits makes it, the time we spend thinking that he doesn’t is enough to tear at every horse-lover’s heart. In case you missed this one, here’s the trailer:

8. Phar Lap. Phar Lap is based on the true story of an Australian race horse that become a champion with the help of a stable boy. However, on April 5, 1932, he mysteriously collapsed at a farm outside San Francisco. His death came 16 days after he won the Agua Caliente handicap in Tijuana, Mexico. He died in the arms of Tommy Woodcock, his dedicated groom. Many have speculated that Phar Lap was poisoned (and in 2006 one scientist claimed to have proven this). The beginning of the movie shows Phar Lap’s death. When Tommy Woodcock is holding Phar Lap’s head and he stops moving, we were wrecked. Add in the scenes when a hard-handed trainer whips him repeatedly, and we’re done.

7. Return to Snowy River. In this sequel to The Man From Snowy River, Jim Craig returns to take up with his love interest, Jessica. Of course she has a jealous suitor who steals Jim’s horses. Jim chases him down the steep embankment AGAIN and, this time, Patton shoots Jim Craig’s horse. It’s horrible. Why do they always have to shoot the horse?

6. Hidalgo. Hidalgo is a great flick. What adds to it is that Viggo Mortensen formed such a close bond with TJ (the horse that played Hidalgo) that he purchased him after filming was done. The grit of the horse and rider make us love this film (for the most part).

But the part that scarred us for life? One of the many obstacles of the Arabian desert race is pits with bamboo posts. In fact, Hidalgo falls into one and is injured, but he survives. One of the other horses? Not so lucky. It falls into the pit and is injured so badly that it needs to be put down. The only means available to the rider? Stabbing. Watching that was … less than ideal.

5. The Horse Whisperer. The accident scene in this film is rough, y’all. Between the friendship montage and the graphic sights and sounds of the accident itself, this is not a scene for the faint of heart. Even my non-horsey friends recall this one. Then when you add in the scene when Grace first sees Pilgrim after the accident and it’s all over.

4. Black Beauty. Admittedly, I believe it was the book more than the movie that upset me as a child, but both are pretty traumatizing. Black Beauty’s friend, Ginger is a typical chestnut mare who won’t stand for poor treatment. Until, that is, she suffers an injury and has difficulty staying sound. After that, she changes hands repeatedly, is manhandled and starved. Her life becomes so horrible that Black Beauty hopes she has passed away so as to end her suffering. The end of Chapter 40, “Poor Ginger,” sums it up best:

“A short time after this a cart with a dead horse in it passed our cab-stand. The head hung out of the cart-tail, the lifeless tongue was slowly dropping with blood; and the sunken eyes! but I can’t speak of them, the sight was too dreadful. It was a chestnut horse with a long, thin neck. I saw a white streak down the forehead. I believe it was Ginger; I hoped it was, for then her troubles would be over. Oh! if men were more merciful they would shoot us before we came to such misery.”

3. Ruffian. Ruffian is a heart-wrenching tale no matter what. The Thoroughbred filly that went undefeated until she broke down in the race against Kentucky Derby winner Foolish Pleasure at Belmont Park breaks our hearts. What’s worse is knowing that they tried to help her but that in her panic she broke her other leg, which resulted in the devastating choice to put her down. The Hollywood version of the story played up this tragic moment, as it is wont to do. The result is this traumatizing scene:

2. Dances With Wolves. There are so many upsetting things about this movie, but I still can’t watch Cisco die. It doesn’t matter that they’re actors, I haven’t forgiven the Union soldiers in the buckboard wagon for shooting the horse. And this is AFTER the horse managed not to get shot when John Dunbar rode him during a suicide attempt at the beginning of the film. Then they shoot Two Socks. The worst part of it is that Dunbar was going back to his outpost to retrieve a diary so that the Union soldiers wouldn’t know everything that had happened with the Sioux tribe Dunbar befriends, but some illiterate soldiers were using it as toilet paper and threw it in the creek anyway. Guys, I just can’t. In case you missed it or are a masochist, a clip of that scene is below. Don’t watch it. It’s horrible.

1. The NeverEnding Story. Hands down, this has to be the scene that upset me most as a child. Not just when it comes to horse movies, but, like, of all movies. And that’s saying something because my parents didn’t filter what I watched (heck, I saw Nightmare on Elm Street when I was five and Silence of the Lambs IN THE THEATRE when I was 10). But when Artax drowns/sinks/gives up/whatever in the Swamp of Sadness no matter how much Atreyu begs him to go on or yells at him, it broke me. I am getting emotional just thinking about it. Sure, Falkor the Luck Dragon is awesome and Artax comes back in the end, but it doesn’t matter. By that point, the damage is done.

Years of therapy and many glasses of wine have done nothing to alleviate the trauma caused by these scenes. Which was the worst for you to watch? Let us know in the poll below!

Shout out to my friends at The Western Thoroughbred, who relived these horrible on-screen moments with me to help with this piece.