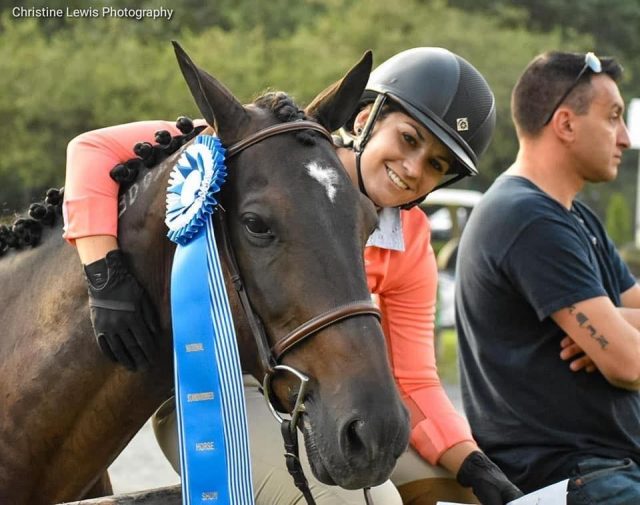 The next installment of our series on Standardbreds introduces Michaela and her fiery horse, Mooney. You can meet them at the World Horse Expo in Harrisburg, PA this weekend! 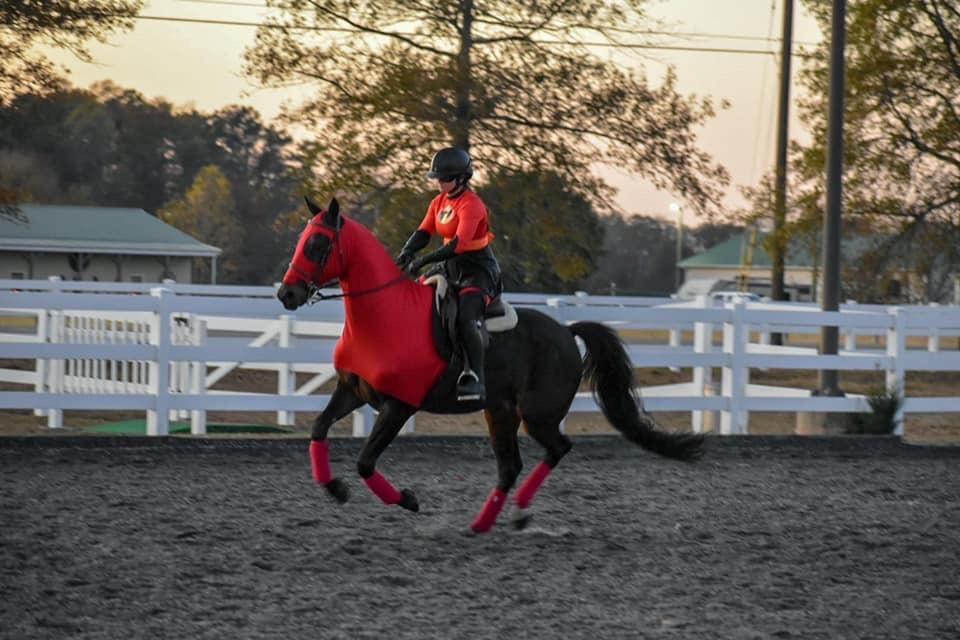 Michaela Schock has been head-over-heels in love with horses since she was a little girl. She began taking riding lessons at four years old at Hidden Meadows Farm with Brenda Stewart. For most of her early riding career she rode Arabians. When Michaela was nine years old her parents bought her a four-year-old Chincoteague pony named Jenny. When Michaela went to Lake Erie College, she rode on the IHSA Western Team. After college she went to Midwest Dental Academy.

While trying to make dentistry a full-time job, Michaela began picking up new clients. She got picked up as a groom at Dovington Training Center in Delaware. She fell in love with working within the racing community. While working with racehorses, she met her favorite horse, a 2006 Western Hanover Standardbred gelding named Lightning Moon. 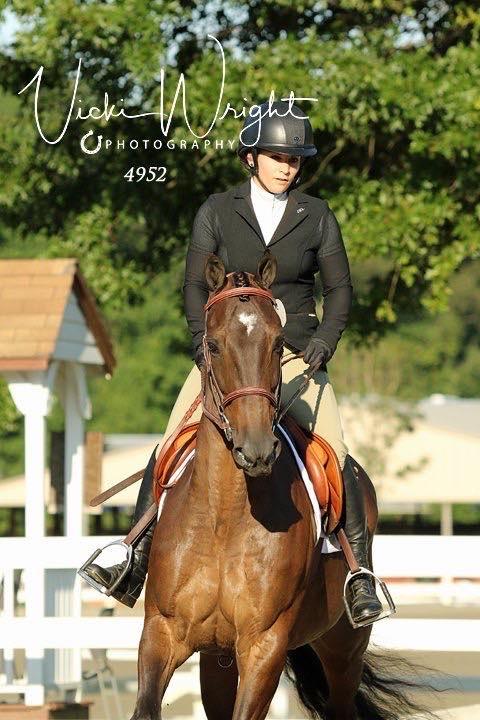 Lightning Moon raced 226 times and won 34 of his starts. He ended his career running in the $15,000 claimers at Chester. Terri Lynch bought Mooney in 2016, when he had bowed a left front tendon and his soundness was becoming an issue. After attempting to rehab Moon, he ended up having to retire from racing, and was sent to Michaela for training in February of 2018.

The plan was for Michaela to make Mooney into a trail horse for his owners. Moon was notorious on the racetrack for his hot temper and his spookiness. So, Michaela started him from the ground since he would throw temper tantrums when he didn’t get his way. Even just asking him to stand still in the arena would result in him trying to throw himself over backwards. Under saddle Mooney was a fireball, but Michaela knew that he needed to be quiet if he was going to be a good trail horse for his owner, Terri, so Michaela ponied Jenny, her old Chincoteague pony, off of him in order to keep him calm for walking trail rides.

Michaela knew that she could not do 60 or 90 days for training with Mooney because she wanted to make sure that he was ready before he went home with Terri. Michaela took things slowly with him and hadn’t put any ring miles on him until about a month before she took him in the Rookie Division and Intro to Dressage at the National Standardbred Show.

Not long after the National Standardbred Show, Moon went home with Terri and Michaela cried when she dropped him off. A few months later, Terri called Michaela and told her that Moon needed a job and that she didn’t have as much time to work with him as she’d thought she would. Terri offered to sell Moon to Michaela and, even though Michaela wasn’t in the position to buy him, she made it work and didn’t look back. And that was even before she knew that he could jump. 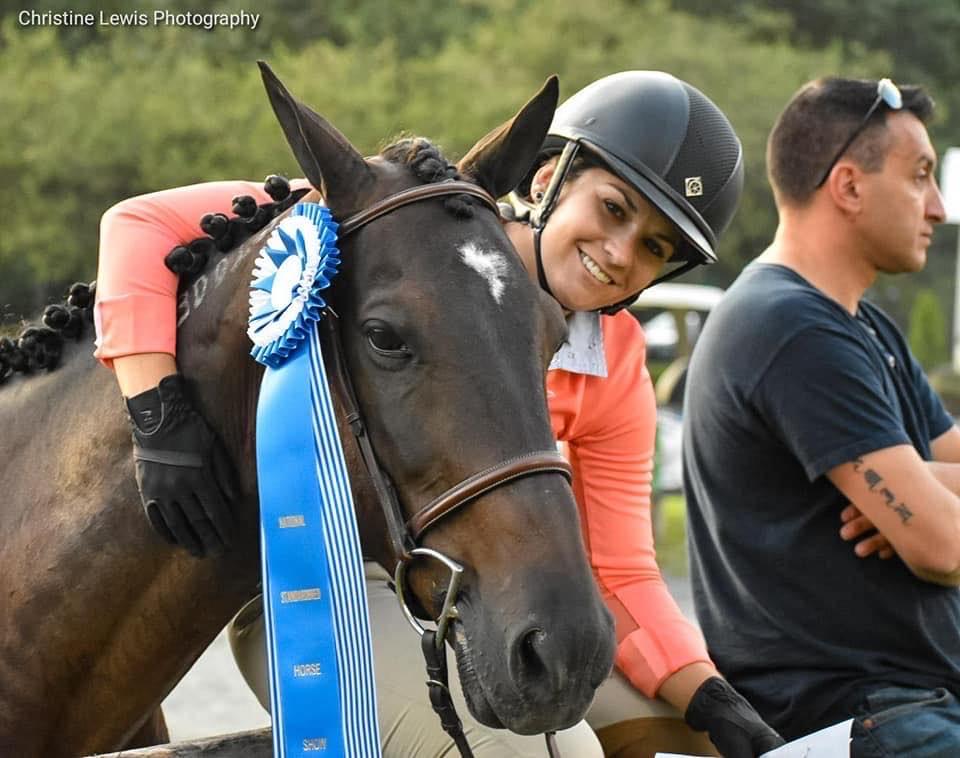 As a little girl, Michaela had wanted to jump anything that you put in front of her. Her pony Jenny was a fabulous jumper and allowed her to compete against bigger horses in the 3’ classes. In college Michaela had to stop jumping because her project horse, Ginger, was unable to jump due to navicular syndrome. So, she turned to riding western. Then Moon walked into Michaela’s life, and despite showing little aptitude for jumping initially — he literally tripped over his own feet at a walk and a trot — she popped him over a crossrail and he jumped it like a four-foot fence. From that moment on, Michaela knew that she had herself a Standardbred jumper.

Since beginning to turn Mooney into a jumper, Michaela’s biggest challenge has been keeping Moon round in the canter. When he flattens out, he breaks into his pace. Many people who ride Standardbreds know this feeling and know that it’s difficult to get a Standardbred to balance in the canter especially through turns. Once a horse has broken to a pace, the rider usually has to wait until they land from the next fence before they’re back into the canter. Michaela started working with Camille Kierstead, who helped her to teach Moon to balance and become soft in the bridle. 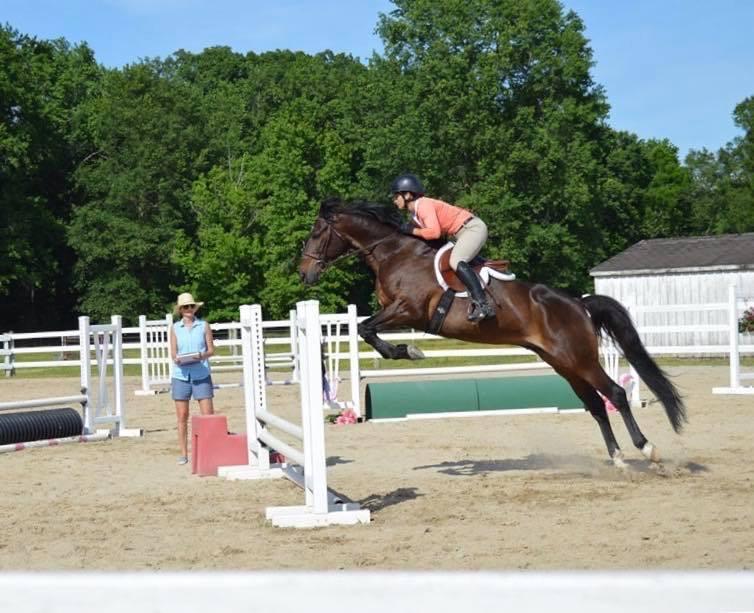 In 2019 Michaela and Lightning Moon went from jumping 18” crossrail courses in March to jumping 3’ courses by December. Michaela’s plan for this year is to see Moon break into the 3’3” or 3’6” divisions at jumper shows and to compete in their first cross-country starter trial in March. They’ll be at the Horse World Expo in Harrisburg, Pennsylvania at the end of February and competing in the National Standardbred Show in jumpers and dressage.