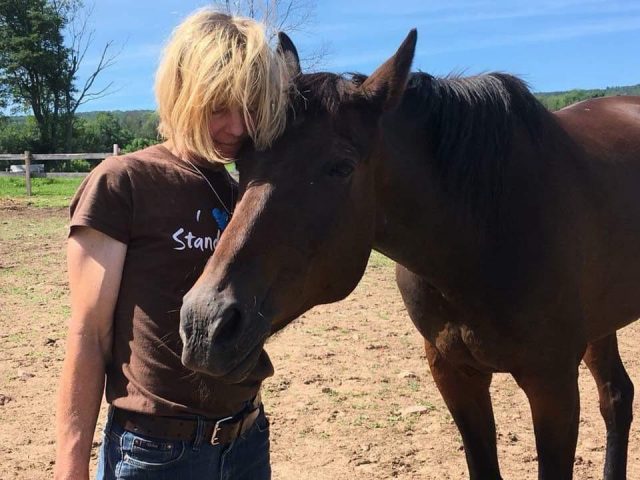 As a continuation of our series on Standardbreds, we want to introduce you to Sabrine Spring, a long-time lover of Standardbreds, and her war horse Sevruga.

Sabine Spring began her love of Standardbreds when she was a 12-year-old girl living in Germany. Her parents leased a retired four-year-old Standardbred for her and her sister to share. Like most 12-year-olds, Sabine hated having to share with her sister, but unlike most pre-teen girls, she did something about it. She answered an advertisement in the paper for a stallion. 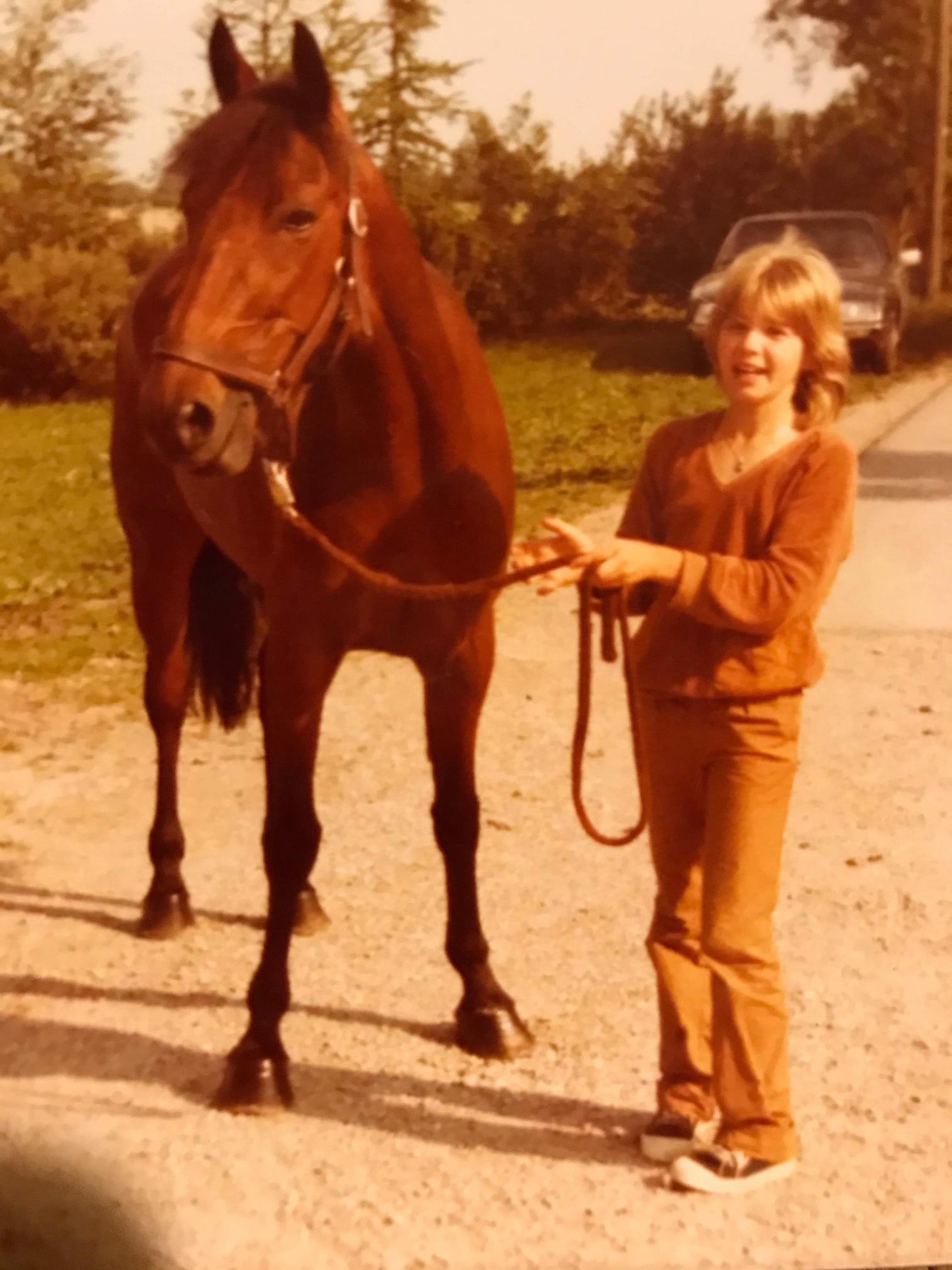 Sabine and Germer, the Standardbred she shared with her sister. Photo courtesy of Sabine Spring.

She answered the ad and told the man that she spoke to on the phone that she would like to come see the horse, but that she could not drive. He agreed to pick her up at the train station. Imagine the man’s surprise when a 12-year-old girl appeared at the train station! Despite his surprise, he still agreed to show her the horse. The stallion’s name was Brabant, the owner had gotten him in a package deal for a mare and stallion and only wanted the mare, so he was looking to rehome the stud. Brabant was a lovely liver chestnut Standardbred with four white socks. The owner offered to trade Sabine barn work for riding time on Brabant. After one year of riding Brabant on the trails at the gentleman’s farm, he was race fit and he ended up back on the track. 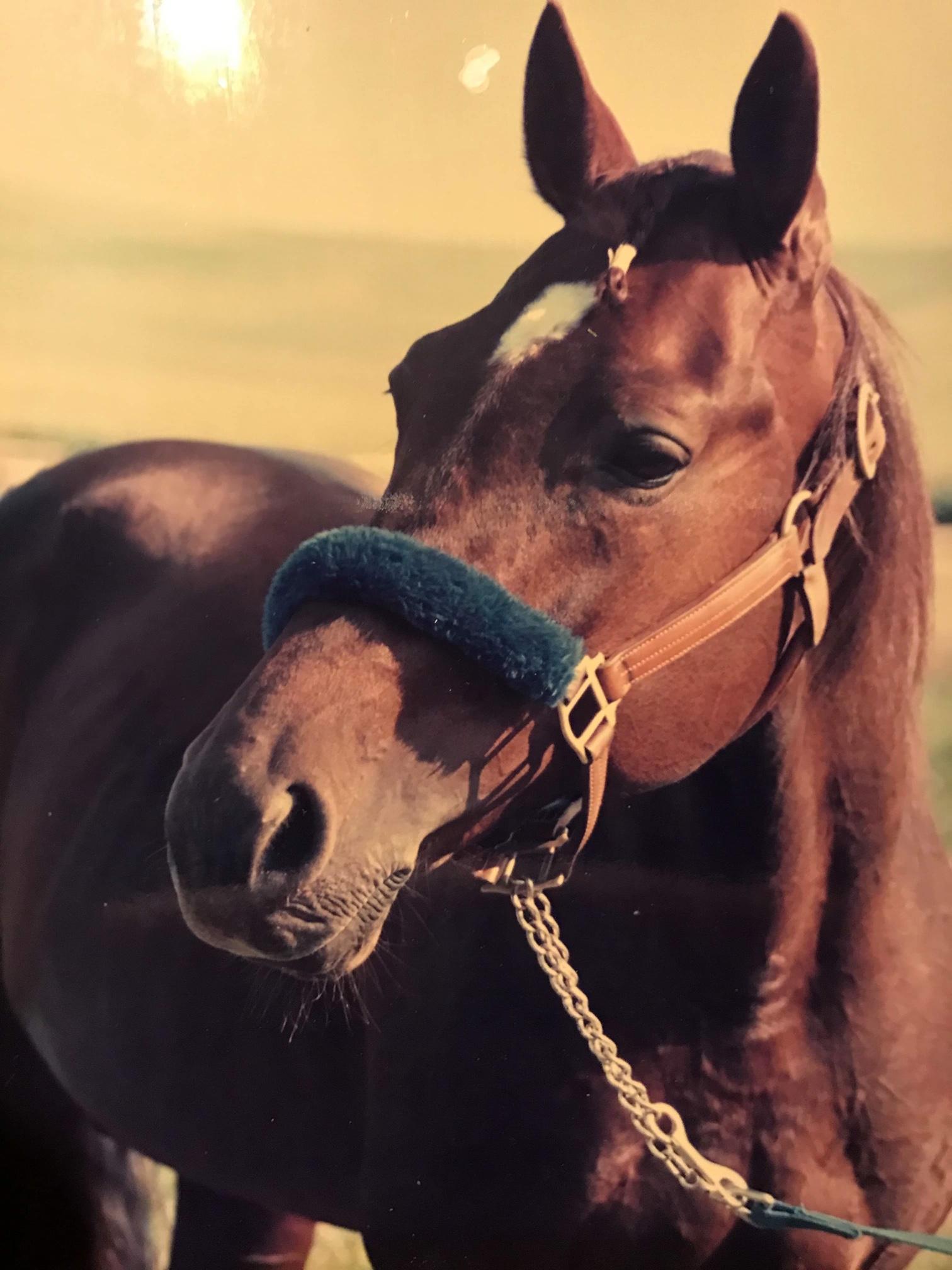 Sabine’s early encounters with Standardbreds in Germany left little doubt of what she wanted to do as a career. But her mother insisted that she get a real job first before devoting her life to horses. So, Sabine got a job as a legal assistant. The man that she worked for was also a rider, so everyday after work, they would change and go to the barn. Sabine lived for those nights riding and the day she passed her exam, she quit her job and went to work at the track and never looked back.

She worked with harness horses in Germany and ended up training a harness horse that traveled all over Europe. When he retired, she decided to take a vacation to America to learn about harness racing in the States. Sabine came to the US on a two-month VISA with plans to work on a few tracks before returning to Germany.

While working in the US, Sabine met her husband. They trained Standardbreds together for years before he took a job as a racing official at Pocono Downs. Sabine then also got into the racing official game and took a job as the assistant paddock judge at Harrah’s Philadelphia Casino. She’s been the assistant paddock judge there for the past 13 years.

Sabine Spring met her Standardbred Sevruga while she was working as a racing official at Harrah’s Philadelphia track. Sevruga’s personality endeared him to Sabine even while he was still racing. She loved the fact that he was laid back in the paddock, but that when it was time to race he was tough as nails. Sevruga was a consummate professional. He earned over $1 million on the track and had the work ethic of a true champion. 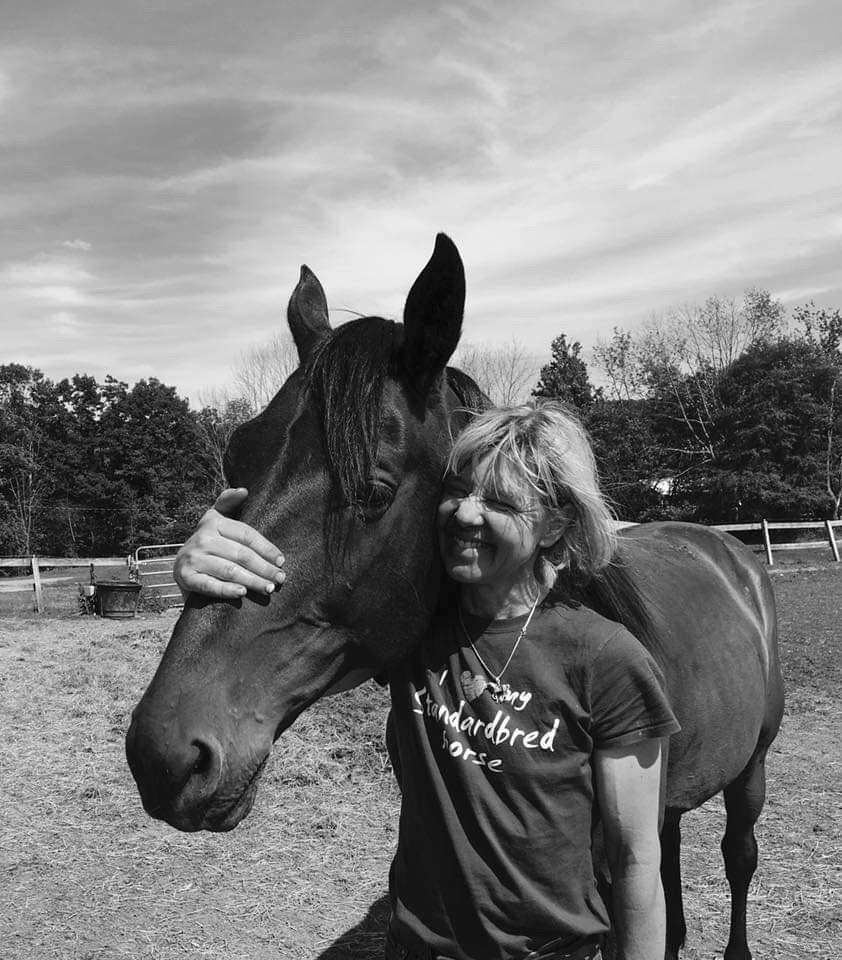 When it became clear that Sevruga was slowing down with age, Sabine talked to his race trainers, Andy and Julie Miller, and told them that she would give him a permanent, loving home. The Millers relayed Sabine’s offer to the owner, but the owner thought that Sevruga still had some good races left in him and switched him to another race trainer.

While with the new trainer, it became clear that it was truly time for Sevruga to retire. He was bleeding from his lungs and had slowed down considerably. The new trainer went to the owner with the same concerns that the Millers had presented, and the owner decided that the trainers were right and that it was time to find Sevruga a home.

The owner remembered Sabine’s offer, so in October of 2017 Sabine got a call asking if she still had room for Sevruga. Of course she did! 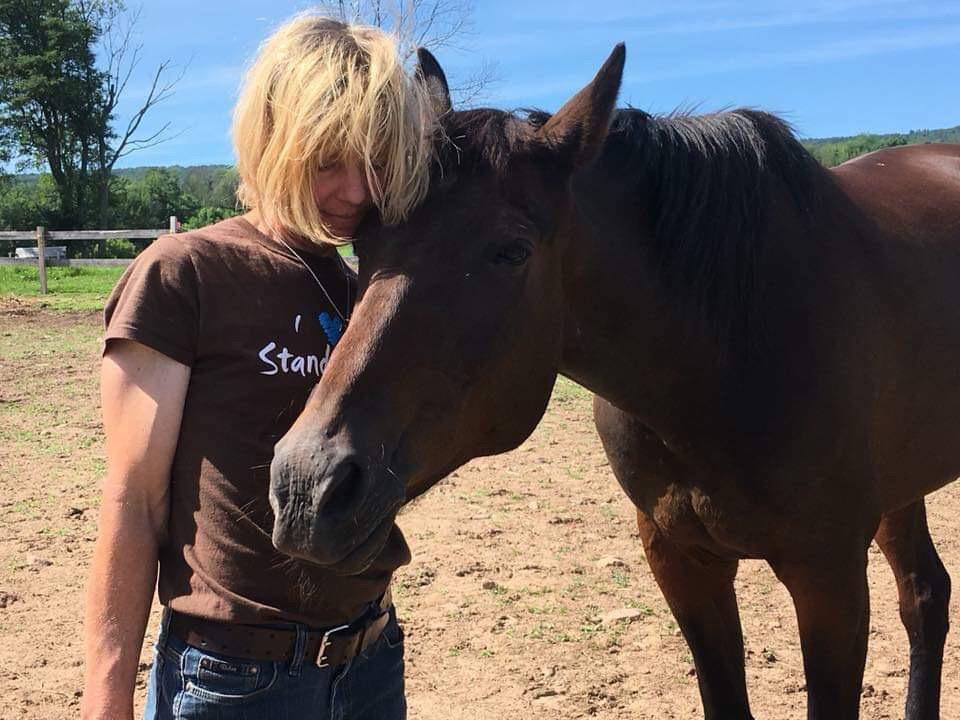 He now lives with Sabine and her two other trotters — a mare named SJ’s Sugarbaby and a gelding named Rich Guy. In addition to her permanent herd, Sabine also has several Standardbreds who are up for adoption.

One of the horses she recently adopted out, Scofanman is competing in limited distance rides with his new owner and is getting ready for endurance rides. Sabine loves Standardbreds and loves trying to help Standardbreds find homes where they can be successful and have happy, productive lives.

In his retirement from racing, Sevruga has found that he loves trail riding. Sabine describes him as a bit heavy on his feet and a tad lazy. She reports that he would not make a good endurance horse, but that trail riding suits them both perfectly. After earning over a million dollars on the racetrack, he has earned some long walks with an owner who adores him. 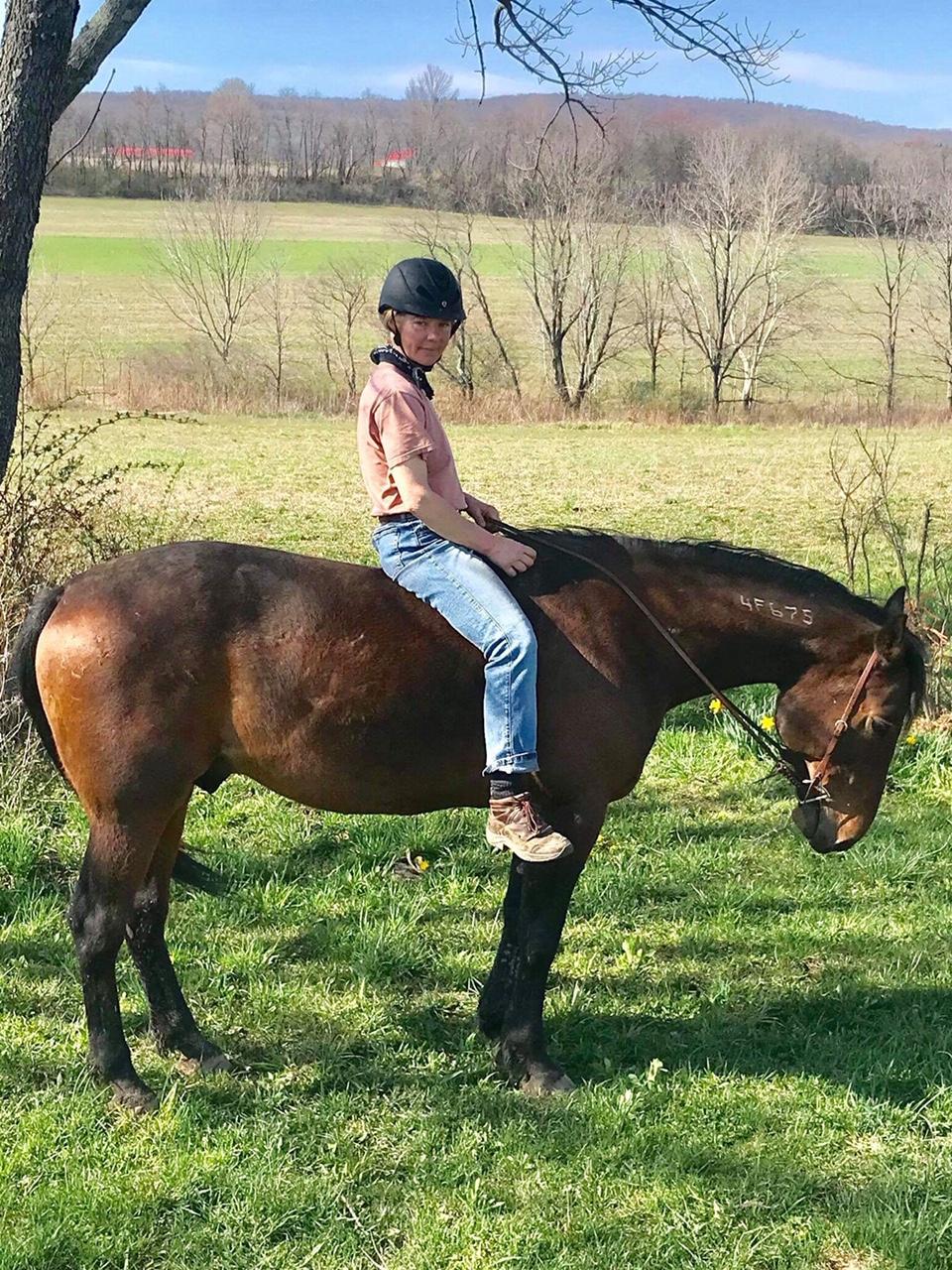 Sevruga on the trail. Photo courtesy of Sabine Spring.

Sabine and Sevruga will be at the Horse World Expo at the Farm Show Complex in Harrisburg Pennsylvania from February 27th to March 1st representing Superior Standardbreds. So, stop by and say hello to a true warhorse!