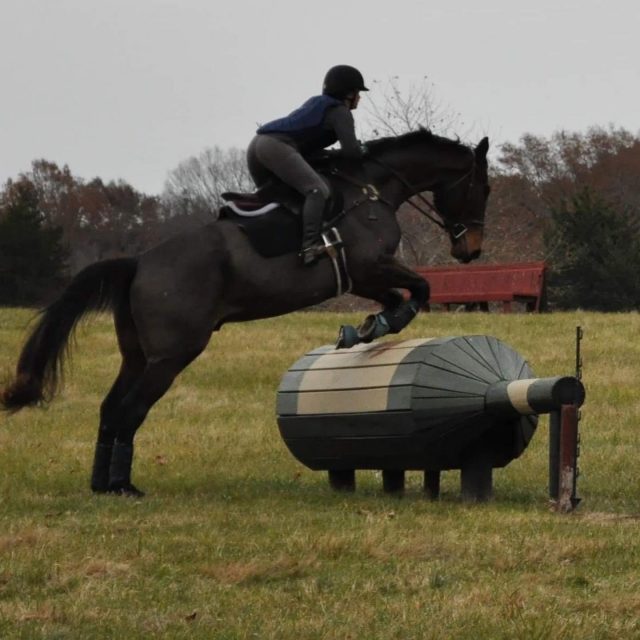 February 21, 2020DeAnn SloanAmanda Cousins#EVENTING, Best of JNComments Off on Best of JN: Confessions of a Hunter Princess Gone Rogue — In Event of Survival, Have a Plan B

Learning a new discipline is challenging, daunting and can often push you to your limits. Jumper Nation’s Amanda Cousins explores how learning to event has pushed out of her comfort zone.

It’s been an interesting deep dive into eventing. Leaving the comforting shores of ringwork and swimming out into the sometimes tumultuous waves of eventing has kept me on my toes and opened my eyes to new skills.

It likely seems crazy and entertaining to the casual observer, but crazy nonetheless. To what end would a professional trainer decide to throw caution to the wind and pick up a new discipline? Surely I’m past any hope of having a real upper-level competitive career. You wouldn’t be wrong thinking that I don’t have the means or the business model to really campaign myself. Which still leaves you wondering why? Well, for one, I’ve never been one to toe the line. The model I’ve lived by and has served me well is “it’s easier to ask for forgiveness than permission” (sorry mom and dad).

Secondly, this life, the professional horse life, is a tough one. The emotional ride and heartbreak it causes reminds me of the ’tilt o whirl’ that is a staple at every small-town carnival. You get off feeling slightly nauseous, a little invigorated and you’re pretty sure you had fun (but aren’t quite sure). A horse trainer feels every catastrophic loss, whether it’s a client’s horse, their own or a friend’s. They feel every high and low of their client’s learning curve and competitive career. There are more long weeks then there aren’t, and you oftentimes question if it’s all worth it, and it is. So in the face of a profession that could someday land me in a mental ward, I want to live and ride and have as much fun doing it as possible. I want to be challenged and do something with a horse that is just for me.

Third, I want to be the best version, personally and professionally, of me that I can. That requires me to be a well-rounded horseman. Well-rounded horsemen don’t stick to one discipline or one thought process or one trainer.

So here I am, buying matching cross country boots and vests and oddly shaped pads, trying not to stick out like a sore thumb. While I still hold true to my cross country jump definitions, I’ve finally come to terms with a lot of the jumps. We aren’t friends yet, but we’re on a first-name basis. I no longer arbitrarily use my crop at any ole ditch (now it’s just the big ones). I can pop down average-sized banks without my breakfast ending up in my throat. You could say it’s getting serious. The first one has to do with my need for speed, or as it turns out, a lack thereof. At my most recent Jimmy lesson, we were given an exercise that ended with an intermediate table and the directive to get a 500mpm gallop to it. Well, for one, I thought, “You’ve gotta be kidding me, have I even jumped a Prelim table yet?”

The second thought I had was, “It’s a good thing I’m last because WTH does a 500mpm gallop look like?” When Jimmy asks you to do something, despite your internal doubts, you feel this sense of confidence and obligation to prove him right, that you are capable of doing what he’s asked. Being the brave little soldier I am, I studied the first two riders, felt like I had a good idea of what kind of gallop I’d need, and set off to start the exercise. I sailed through the first part of the exercise, jumped the last jump before the table and kicked Duncan into our “gallop.” I felt like Rose on the front of the Titanic until Jimmy’s voice broke through my thoughts with a “change your speed now.”

Shut the front door; I did change my speed. I need more? Well, okay, I hit the gas pedal more, and Duncan met that table like it was Beginner Novice height. I’ll need some more work with my gallop and getting the real required speed, not just what I thought worked, but it was a great example of how the right gallop can make that huge table feel like a speed bump. Funny that we always seem to feel safer being slower. The second time I was confronted with my differing idea of a gallop was when I also learned my second life lesson. This time I was taking a clinic with Stephen Bradley. I mentioned in my last blog about how much I preferred going up banks as opposed to down, and that was thoroughly tested in this instance. Stephen began to tell me my course, which started with a simple warm up table and then instructs me to get my 500mpm gallop (there’s that word again) up the bank complex. Let’s take a brief pause to set the scene.

Behind me were two bank complexes. The one on the left was three consecutive banks, appearing to have a one stride in between them, and pretty hefty in height, and earlier I had been admiring it thinking, “Boy that’s big.” The bank complex to the right of the Godfather of all bank complexes, was its itty bitty baby brother. It had just two banks, maybe a quarter of the size of the Godfather, with two strides between them and some logs and houses placed around it.

So when Stephen instructed me to jump the banks, I looked at the baby complex and thought “oh piece of cake”. He then continued and told me to jump the log, take three strides, come down the banks and then end with the house. Which meant I was in fact doing the baby complex, but only after I did the Godfather complex. Again, I’m not a student who will tell a trainer no (unless I truly feel unsafe) and I’ve ridden with Stephen enough to know that if he thinks I won’t die, then I won’t.

So I set out to the first jump, with Duncan looking everywhere but where he should (clearly he wasn’t concerned), not instilling confidence that we wouldn’t die when we got to the Godfather. Stephen was yelling something I couldn’t quite make out, and I wasn’t emotionally ready for what was coming, so I pulled my hunter princess card and did a courtesy circle past Stephen. He was telling me I needed not to slow down and to keep galloping to the banks. Thank God for that courtesy circle because despite all the memes, I was not going to add more leg and keep galloping.

In the last moments before we met the first bank, the world got quiet and time slowed down. The problem was, I wanted out of that Disney moment, where time would actually speed up and I could hear the world around me, since I’m sure Stephen had some input I desperately needed. When we reached the top of the Godfather, I knew I was alive but otherwise the experience was a blur of hoofbeats and adrenaline, which brings us to life lesson number 2. Why don’t we jump wine bottles in the hunter ring? Photo by Tammie Paulino

In case you survive, always have a plan B. You see, my friends, I thought I’d be dead somewhere in the middle of the Godfather, so I didn’t really think about how I’d be doing the baby brother complex without looking like a goober. And look like a goober I did. My log was fine, but we had a stop at the top of the world’s smallest bank, deer hopped from the standstill and catapulted off the last one. Plan A was attempt the Godfather and die in a pile of tears, leaves and horse hair. Had I made a plan B, I might not have looked so stupid doing the easiest part of the exercise. But then what would I have to blog about?

I’ve got a ways to go at redefining my idea of the gallop. A forward ride to a jump in the ring is for sure not the same as a forward ride cross country. However, when I finally get this concept down, I’m going to feel like the slowest rider in the world back in the ring. It’s all a matter of perspective.