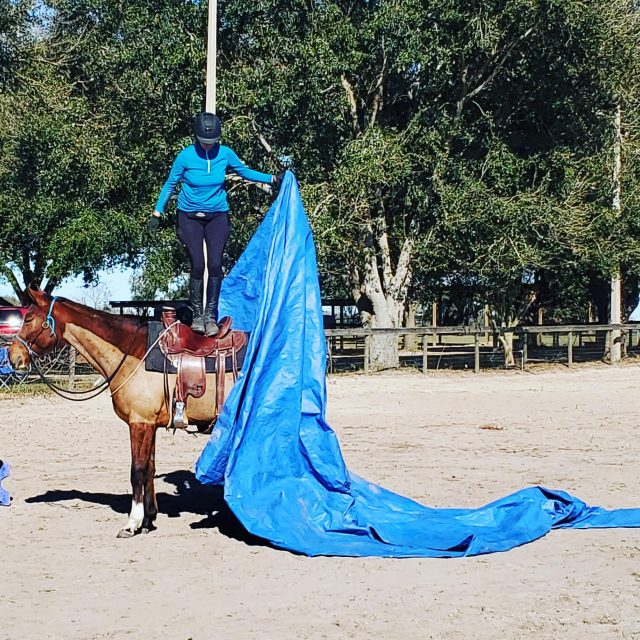 Lindsey Partridge explores why using fear is not the way to go about training a horse. 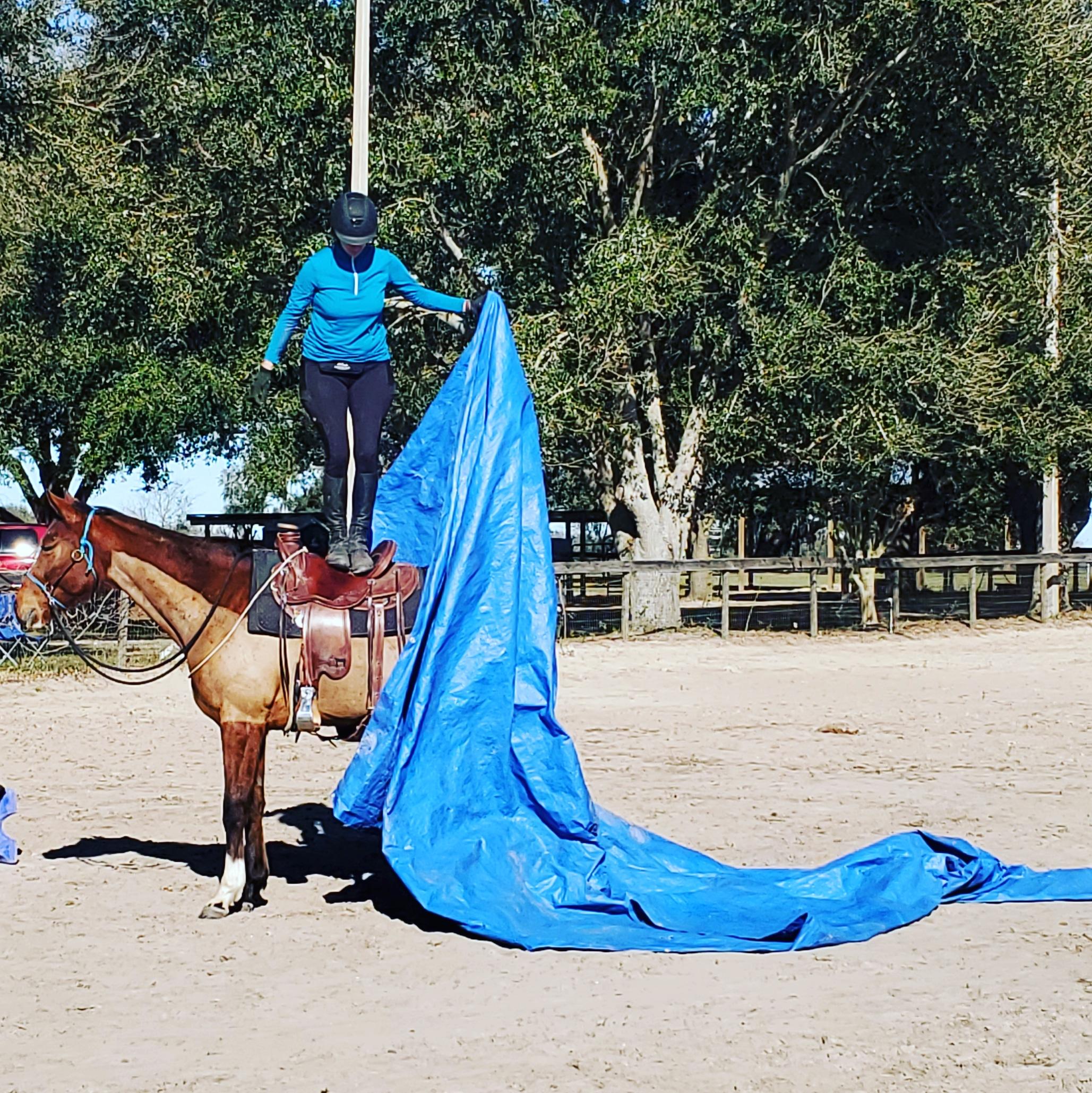 Fairly, my 2019 TB Makeover grad, that has mastered the tarp. Photo by Lindsey Partridge

A little while ago a video was circulating on Facebook and YouTube of a barrel racer using a shocking device underneath their saddle pad to try and get their horse to go forward. The horse was clearly very scared and agitated and was bucking trying to get the rider off. The horse was even crashing into the panels around the riding area.

The video went on for several minutes and I don’t think the rider ever got the horse to actually go forward. There were a lot of people commenting about how wrong that was — being mean to the horse and cruel.

I agree that shocking a horse is not a good form of training, but nobody was really commenting on why that is a poor training choice beyond it just being cruel.

Let’s say you don’t care about causing emotional fear or physical pain to a horse. Let’s say you are so focused on trying to win that you are willing to do anything. If that’s the case, appealing to somebody’s empathy for the horse may not persuade someone that shocking a horse is not the best training method.

Instead I want to look at what is happening to the horse when you use a fear-based training method. We all know that horses have a fight or flight response. And we need to realize how this impacts training. 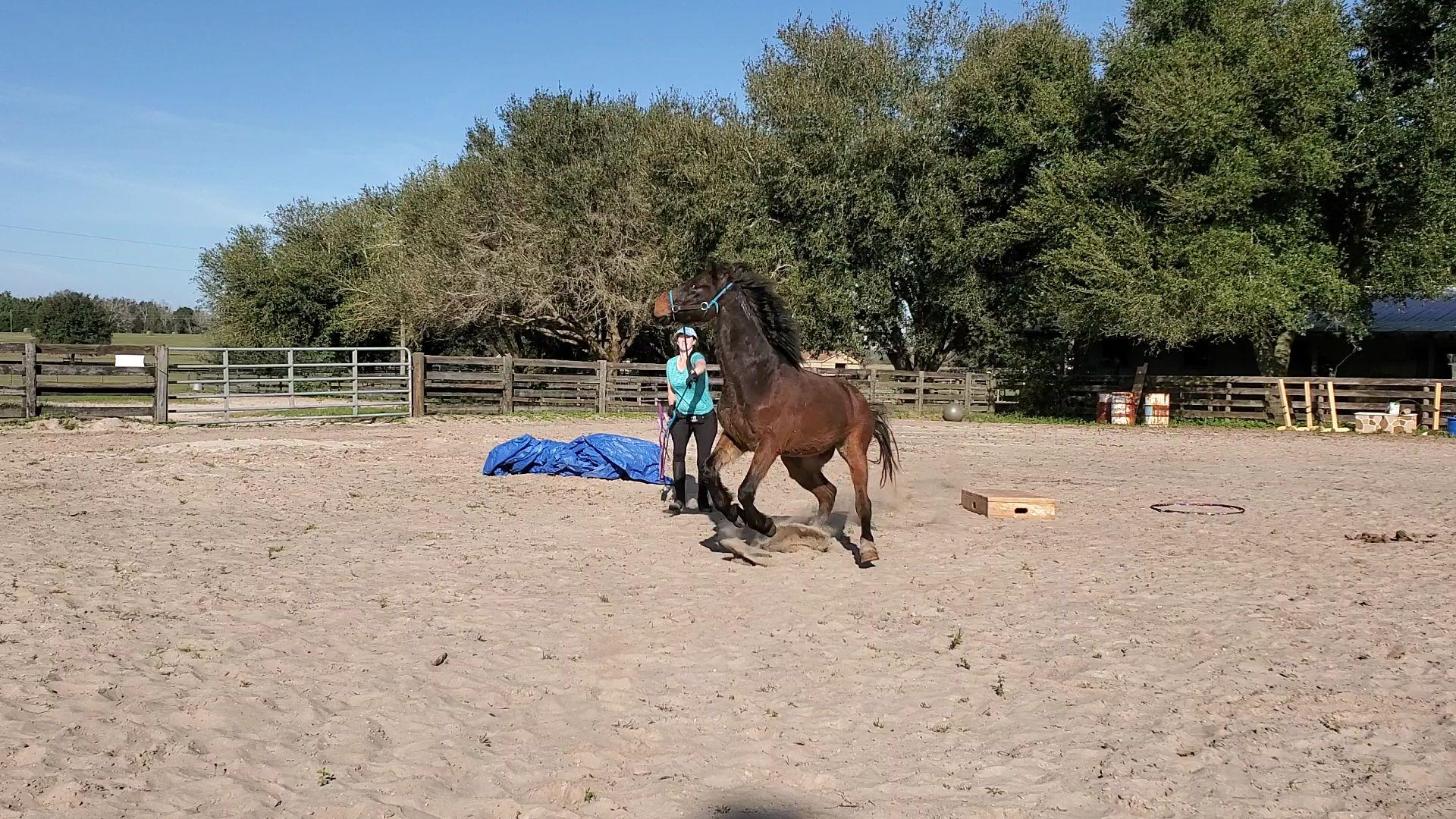 Valiente learning to overcome his fear of the tarp. Photo by Lindsey Partridge

There are two main reasons why shocking a horse using fear-based training is not good.

The first point in this scenario is that sometimes, when a horse is choosing not to do something, the horse may be in pain or something is physically wrong. If you push them they may hurt themselves. Sometimes a horse will say no because they don’t understand or they are not confident, but when they put up a huge fit about not doing what you asked and really refuse to go forward we always need to rule out pain.

If a horse is not physically comfortable, if it is injured or feels like it are going to injure itself we really risk doing long-term damage. I will never forget many years ago I had a Thoroughbred mare and we were jumping at home. All of a sudden she started to put on the brakes and did not want to jump anymore. We were just doing little jumps, probably about 2’6. I thought she was being stubborn and just didn’t want to go anymore. I pushed her through it to make her jump because I thought she was trying to get away with not jumping. As it turns out the next day she was lame. Ever since then I have thought maybe she was trying to tell me something and I didn’t listen.

I have also had it happen that when a horse has acted up, I’ve have gotten off thinking that there was a physical issue and ruled out everything — saddle fit, vet check, having the farrier look at the feet, getting massage/chiro/teeth done and it turns out it was a behavioral issue. It is important that a horse does not learn they can get away with being lazy and not having a work ethic, but it is very worth ruling out all of the physical issues. If you don’t rule out potential pain we risk injuring our horse.

If you use fear based training, a horse is likely going to push past some pain and potentially injure itself because it is actually tired, worn or not thinking properly.

The second reason for not using a fear-based approach in training is because no matter what your discipline is, it is to your benefit if your horse is in a thinking frame of mind. It is important that horses are in a thinking frame of mind because they know they can listen to your cues and they’re also less likely to injure themselves because they’re using their brain power and can assess the situation. 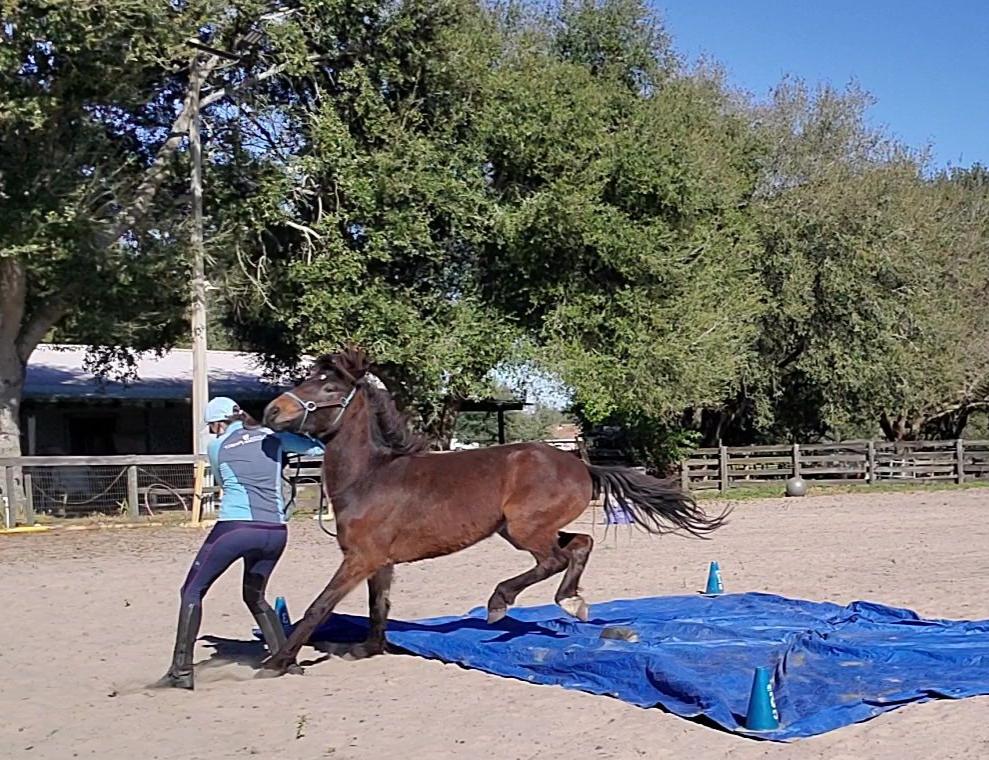 Valiente learning to overcome his fear of the tarp. Photo by Lindsey Partridge

Most of us have heard the phrase cared stupid. Have you ever been scared stupid yourself? That’s because sometimes you can get so scared that you aren’t even thinking, listening or observing the world around you. You get so fixated on whatever it is that is scaring you that nothing else matters. Sometimes you can get so scared that you actually lose control of your bladder or other automatic functions. This does not make you perform better, it makes you perform significantly worse. The same is true of horses.

I remember one time riding in a clinic in front of hundreds of people; I was so nervous that I actually forgot my jump pattern. Then the clinician made me feel more embarrassed for missing my course, so my memory got even worse! That’s because more pressure isn’t always the answer.

Horses are very strong and powerful animals — making them be scared stupid makes the sport dangerous and can lead to unnecessary injury. Not to mention that it is just not kind.

Even if you are trying to get revved up to have some speed, if you are excited rather than terrified, you will still get the adrenaline pumping with the difference of actually being able to think.

I definitely see many different examples whether I am at competitions or just visiting other barns. The challenge is that humans can get frustrated and it can be difficult to put our emotions aside. Instead we need to focus on trying to help the horse understand what you are trying to get them to do, or reward them for doing the right thing.

Take a look at Valiente (my mustang that I’ve had for about one month) when he was learning about the tarp. He became terrified! Instead of punishing him, I helped him.

My encouragement is to recognize that there is value in using positive reinforcement. Whether it is because you have an interest in being kind to your horse, an interest in trying to create the best competitor or keeping your horse in the thinking frame of mind where they are motivated to try.

If you are using fear to train your horse you are creating anxiety and you are taking away from your horse’s ability to think and understand your instructions clearly. This is going to cause a spiral effect of your horse not being able to listen to you, you getting frustrated and putting more fear into the horse which then makes them more scared and less likely to hear your instructions and the cycle will repeat itself. 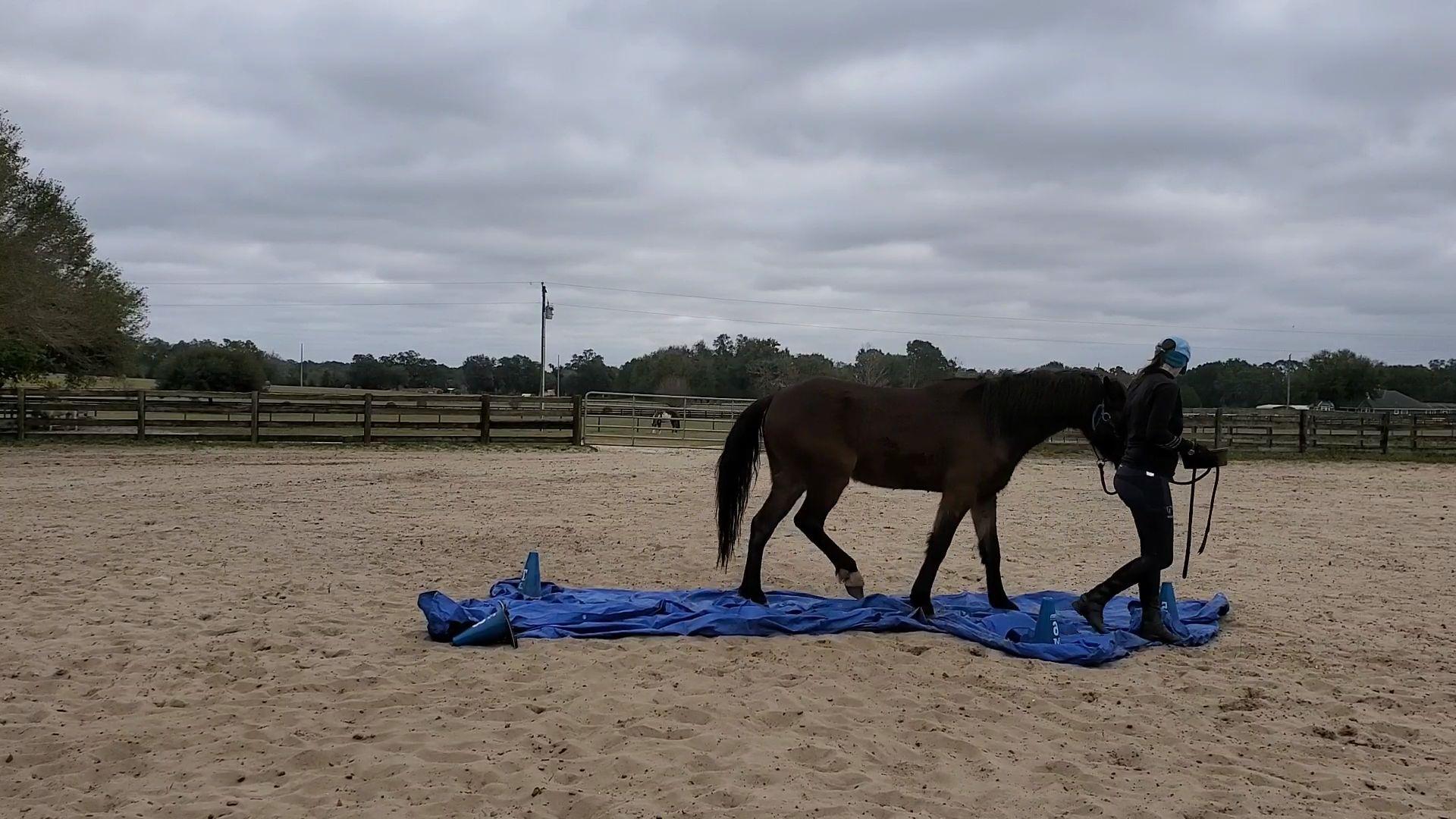 Valiente has mastered the tarp. Photo by Lindsey Partridge

Instead, break the cycle. The next time your horse frustrates you take a moment and think how you can help your horse understand, or if you are putting more pressure on your horse be careful not to cause pain or fear. There is a big difference between respect and fear.

Take a look at Valiente overcoming his fear of the tarp. It is a really challenging task and he learns to progress with positive reinforcement.