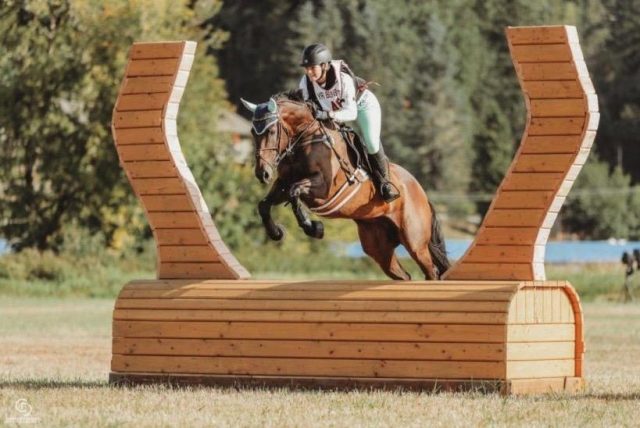 February 5, 2020DeAnn SloanContributor#ESSAY, Best of ENComments Off on From Rags to Riches and Rescuing Each Other

Eventing Nation’s Conner Ann Clark recounts the way she met her heart horse by being willing to give him a second chance.

From rags to riches: Second Chance McFly has had a remarkable journey to eventing success. Photo by Courtney Drake Photography.

One of our favorite things about this sport is that there’s no obvious path to success – and that goes for horses as well as riders. Sometimes, all an unlikely champion needs is the right person to see the diamond in the rough — and sometimes, all that person needs is that horse to help them feel whole again. 20-year-old Conner Ann Clark found that out firsthand when she stumbled upon an off-track Thoroughbred in need of a second chance. Take it away, Conner…

In 2016, I had a long run of bad luck that many equestrians can relate to. On top of lameness issues and vet bills, I lost my heart horse to colic. I was devastated; I was done riding and in a rather dark place. I had had enough heartbreak over the years and I thought it was time to find a new passion.

Well as many of you can guess, that did not last very long — four months to be exact. A horse for lease came across my path and I took this as a new opportunity. He was a great reminder of how much I missed riding but he was no Prince Charming. I didn’t get “swept off my feet” and he had several lameness issues and I knew this Cinderella story would soon come to an end, which it did.

I slowly started to look for a new horse and came across the cutest off-track Thoroughbred. His Jockey Club name was Golden Boy Mark. “Mark” was a 10-year-old gelding and needed to be rehomed as soon as possible, so his price tag was low. I figured maybe I could get him as a project and this could help me snap out of the funk I was in.

So less then a week later and defying everything my mother told me, I sweet-talked my dad to take me out to see him. I was told he was “a little thin” and expected to see the normal Thoroughbred “ribs,” but when we showed up all we saw were skin and bones. His feet were long, his living conditions were less than ideal but his eyes told another story. I could tell he was also in a dark place.

My heart shattered and melted all at the same time. My dad and I both had the same idea and we knew we could not leave him there. After some time on the lunge line I noticed he had nice movement and an eagerness to please. I only hopped him for just a short time as he was so malnourished. He had an amazing brain and something just told me to take a “chance” on this one. So in the trailer he went.

After a few months of doing nothing but eating, getting groomed and loved on, I decided to pull him out of his stall and put him into my riding program. This is also where the name change came into play; Mark was no longer fitting. He was getting a second chance at life and at times he and Marty McFly had one too many similarities. This formed Second Chance McFly.

My lease had ended due to yet another lameness so I made Chance my main priority. Chance was eager to work and learn, but more than anything he wanted to please. He was doing so well on the flat I decided to lunge him over a crossrail and boy did he love it! After many lessons and lots of homework we decided to enter his first recognized show in 2018. We entered the one-day horse trials at Spokane Sport Horse Farm, running Beginner Novice. Chance took home second place on a 20.9 dressage score! I was over the moon with him. He had found his passion and his job.

Figuring out life as an eventer. Photo by Courtney Drake Photography.

The rest of 2018 was a whirlwind; we moved up to Novice and he absolutely loved it. He also qualified for the American Eventing Championships at Beginner Novice in Parker, Colorado. We were in the opportunity class, not the true championships, but with the same challenging courses and Chance took home the blue! I couldn’t have been more proud of the show horse he had blossomed into. He went from nothing to a champion almost overnight.

Over the years our relationship has done nothing but grow. With Chance being a rescue he is willing to do anything I ask. He is brave and confident all on his own, which gives me the confidence I need while riding. The bond and the trust between the two of us is unbreakable.

At the beginning of 2019 we decided it was time to move Chance up to the Training level. I was quite nervous as it was both of our first Training level event. But as soon as we left the start box I could almost feel him say, “We’re ready”.

He stepped up in the places I was lacking and once again he gave it his all. I was grinning from ear to ear and my face was covered with tears of joy when we crossed the finish line. That was what it was supposed to feel like! That is what I had been missing all these years! Chance and I ran a few more Training events all with the same outcome and the same feelings and smiles. In the new year we plan to attend a few more Training level events with hopes of moving up to Modified at the end of the year.

Just when I thought I had lost my heart horse, I realized my mare was just the gateway to my ‘true’ heart horse. Chance has been my best friend, my partner and my courage over the past few years. He has listened to me in my time of need, always been there for me both on and off the course. Together I feel we can take on the world. I know he was my rescue horse but I honestly cannot tell you just who rescued whom.