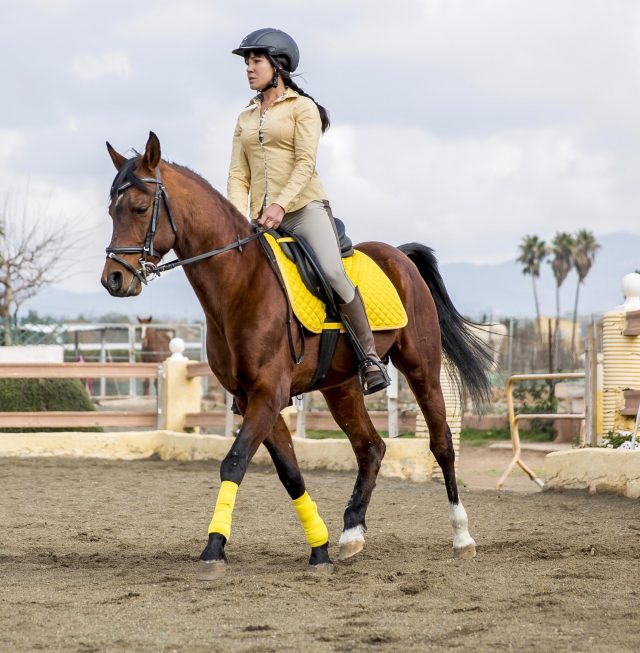 January 17, 2020DeAnn SloanAmanda Cousins#EQUITATION, #RIDING LESSONS, Best of JNComments Off on Best of JN: Time for Change — Why We Shouldn’t Be Teaching Riders “Up-Down”

You’ve all heard it and likely said it, probably ad nauseam. I’ll be the first to admit it, I’ve said it too. But the question remains, why do we say “up-down”?

Let’s be honest; the motion in which we post is NOT up or down. If it were, posting would look a whole lot different.

Then why do we say “up-down?” It’s a question I’ve been pondering lately (hence this article) because, honestly, I’ve spent many years saying that exact phrase, and that’s what was taught to me many moons ago. I turned out okay, right? Perhaps riders can be taught to post by going up and down and, eventually, on their own, they learn the correct motion of swinging forward and back. That’s how I learned, at least. The fact remains, however, that not everyone does. I’ve spent hours re-teaching riders of all ages how to post because years later, they’ve retained the up and down motion. If we’re going to have to re-teach posting, why are we saying “up-down” to begin with? I’m going to assume it’s because in general, people do not know a better way to go about teaching it, or perhaps just haven’t thought about doing it differently than the way they’d been taught.

Why exactly is “up-down” incorrect? Well, for one thing, it does not correctly describe the motion our bodies make when posting. While posting, our hips swing forward toward the pommel of the saddle and then swing back to the seat of our saddle.

If it’s incorrect, we shouldn’t need a second reason for not teaching it, but for conversation’s sake, there are position flaws that occur when this terminology is used. When a rider attempts to mimic the motion of “up-down,” they brace on their stirrup to force their body out of the saddle. Bracing on the stirrup generally causes the heel to come up, the foot to swing forward, the knee to grip and the upper body to fall back.

When posting correctly, as our hips swing forward, the pressure shifts to the thigh, instead of straight down to the stirrup, negating the need to brace. I could spend this whole article describing the negative effects of “up-down” posting and all the position flaws it creates.

Instead, I’ll save us all time and direct you to Wendy Murdoch, who has a fantastic video showing the difference between the two with a skeleton. I can’t exactly argue with our skeletal structure.

If not “up-down,” then what? For me, the thing that’s seemed to have the most positive and digestible affect for students is saying “swing forward and back.” Explaining that their hips are going to mimic what you do while sitting on a swing.

This isn’t a method that makes posting “easier” for a student to learn; young riders seem to struggle with swinging just as much as they struggle with going “up.” Adults, however, seem to absorb this terminology better since they have a deeper understanding of our anatomy and skeletally how our body moves. Aside from being an anatomically correct way of explaining it, there are quite a few upsides to saying, “swing forward and back.”

First off, it seems to negate the need to tell a rider to put their heels down. Obviously, having your heels lower than your toes is important, but we also know that forcing or jamming the heels down is not the intended goal either (that’s a whole other article to write). When a student is taught to “swing,” their hips stay open, also allowing their knees to stay open. Much of a rider’s issues with heels actually stem from knee pinching, which also stems from the hip/pelvis being closed.

Think about the song you learned when you were a kid: “the thigh bones connected to the hip bone” (google has informed me that the song is actually called “Dem Bones”). When a rider never learns to lock their pelvis, you don’t need to repeat heels down until the cows come home. If our heel is down and our knee is open, the calf has more contact with the horse’s side, also speeding up the process a rider goes through to gain a quiet but supportive leg.

Another really interesting upside is the ability to sit the trot. Perhaps for a beginner, it seems to be an unnecessary skill, but we also see how these early bad (or good) habits stick with riders. It can be hard enough for intermediate riders to sit the trot well, and it’s not pleasant watching beginner riders bang around on their kind lesson horses.

But since the term “swing” enables the rider to keep their hip open, the rider is naturally able to sink into the saddle and move with the horse’s motion instead of against it. What we tend to witness is the rider tipping forward, closing their hip and knee, thus bouncing against the horse’s rhythm instead of moving with it. Skeptical of the difference? Watch the video below of a student in her first two months of lessons in her first lesson with the sitting trot.

Most of my teaching epiphanies happen while teaching my more advanced students or taking lessons myself. But in studying the effects of “swinging” to learn to post with my beginner riders, I’ve had a real eye-opening experience. I spend a lot of time talking about an open knee with my advanced riders. It seems like an epidemic with the average rider because there isn’t enough conversation about the proper place to hold with the lower leg.

Even for me, the knee can be such a natural gripping point when riding a squirrely green horse or hacking out on uneven ground. If I catch myself gripping with my knees, how many riders do that without being aware, and where did that habit stem from?

Even when aware, it can be so hard habit for riders to break. But why? If being taught “up-down” skeletally fosters a closed hip, a pinching knee and bracing on the stirrup, are we not also teaching the habit to ride with a pinched knee from early on in the education process? Could perhaps the weak lower leg and pinching knee we see so often be something we’ve instilled in our riders from day one?

I find that thought chilling (I sure don’t want to be the reason someone has a lifelong bad habit) and eye-opening (if we suspect, we can change!).

Correct equitation is the most natural thing in the world because it breaks down to the skeletal level. It’s scientific. It’s not romantic, mystical fairy dust floating around that we get glimpses of but never quite master. Finding digestible ways to break down the way our body works on a horse and correctly communicating it to the rider needs to be the top priority, particularly at the very beginning of a rider’s education.