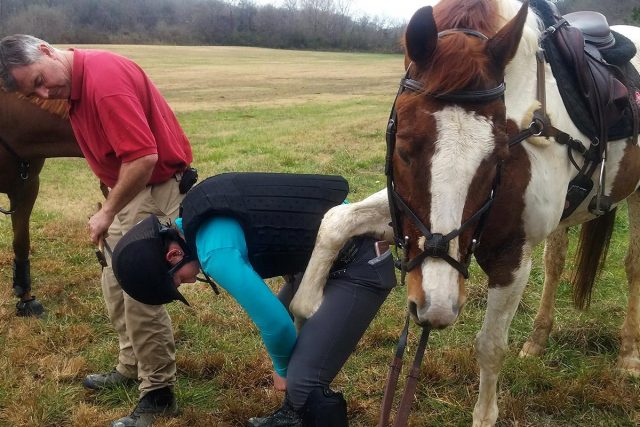 Let’s be honest, when it comes to horses, we’re always one thrown shoe or abscess away from a disappointing day. We’ve all been there… and so has Ainsley Jacobs. Find out how in this week’s Lessons Learned.

Our first hunter pace was so much fun … until it wasn’t. Sometimes I wonder why I even bother making plans anymore, because the Universe so clearly does not want me to succeed.

A few days ago, I checked the forecast for this weekend. I was all caught up on work from my day job, JJ had been training *really* well lately, and it was predicted to be 60*F here in Atlanta on Saturday (in December!!)

I figured he/we could use a much-deserved break from all our dressage flat work (since it’s been raining nonstop and we haven’t been able to jump) and decided we would go somewhere fun.

There was a benefit hunter pace/horse show being held to raise money for Drew Olsen, a local Georgia-based performance horse trainer who has an astrocytoma brain tumor and is currently receiving radiation (donations can be made via PayPal to [email protected] or by Venmo to @gallop766 if you feel so inclined), and I figured that was the perfect way to close out our 2019 year and registered us for the “first flight” fast-pace group since we both really enjoy galloping.

It was nice to wake up at a leisurely 7:45 am (instead of a normal horse-show 6:00 am time or earlier) and have a coffee before I headed over to the barn to grab JJ. With him loaded up, I hauled 1.5 hours to Chattahoochee Hills, one of our favorite venues, and got tacked to ride. After JJ dragged me down to the cross country field (it was pretty obvious what he was hoping for) and us wandering around for 30 minutes trying to find the start of the trail (spoiler alert: it was back up near dressage warmup, even though one of the girls at check in told me it was down in the XC field, ugh) we found it.

My friend and JJ’s beloved chiropractor Dr. Holly Breaux was finishing up a cross country school with her lovely spotty horse, Dan, so I tacked myself on to another friends’ group and headed out around 12:15 pm. They were riding greenies and wanted to keep it slow, which I totally respect, and they were fine with me ditching after we got onto the main part of the course.

JJ was all warmed up and absolutely loved his first canter. Holly caught up with us and we cruised along together for the first stretch. It was really fun riding out with a friend, but it seems Dan was a bit tuckered out from all his jumping fun, so Holly held back while I went on ahead.

I wasn’t worried at all since JJ is perfect on trail by himself and has no problems being in a field or in the woods all alone. We had SO MUCH FUN running all through the fields and I know he really loved being able to go Go GO without mom up there nagging him about pace, or direction, or what jump he’s supposed to jump. 😉 His ears were pricked, his tail was up, and he was having a blast going at a spirited canter and/or light gallop.

After 45 minutes of a good pace (peppered with trots and walk breaks, as needed of course!) I started noticing that the trail marker flags were few and far between. They had gone from long pink streamers to just small pink knots on random branches and I was concerned I had somehow missed the trail or gotten lost.

Well, after walking another five minutes or so and seeing no marker at all, we entered a field and I started hearing gun shots. No big deal – either target practice or hunting. But they started getting closer… and although JJ didn’t care, I definitely did and was worried we might be mistaken for a deer. So, I turned around and we hurriedly headed back. JJ was happy to give me a nice, rolling canter but after were were safely in the previous field, he broke to a walk and started limping. CRAP!!

Turns out, he pulled a shoe. AGAIN. I am getting really tired of this. I quickly dismounted and called one of my friends who happened to be helping organize the event and asked for help, and she relayed my message to Hugh Lochore, the facility’s event director.

As we waited, I held JJ’s leg up so he wouldn’t stand on the skewed shoe and hurt himself. His blood was up and his adrenaline was going, but he stood stock still for nearly 20 minutes and simply grazed, calmly, on three legs. He always amazes me with what a good boy he is!

Some friends and other riders came as we waited and graciously kept us company until my hero Hugh showed up with farrier tools, and my badass friend Marian Bickers of Cornerstone Equestrian (who I had originally started the course with, ironically) saved the day by taking point on removing the wrenched shoe since she’s a pulling professional and I most certainly am not. 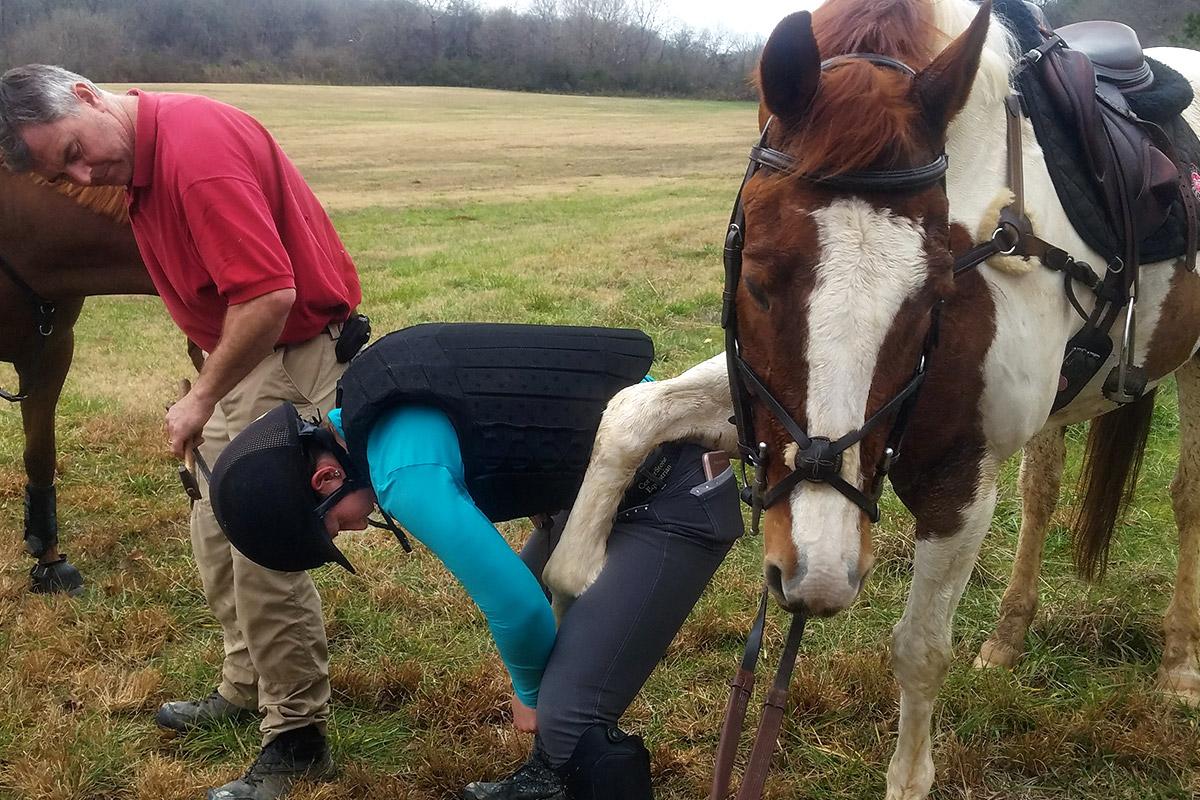 My heroes, Hugh and Marian, while JJ looks appropriately ashamed. (Photo by Ainsley Jacobs/Ride Heels Down)

Fortunately, JJ was sound and his reward for that was having to cart me all the way back home. Marian and her student, Kelsey, were riding babies who were a bit tired, so we just doubled back the way we came and all did the walk of shame together.

My “first flight” hopes had unexpectedly devolved into “hilltopper” status – not that there’s anything wrong with that, it just wasn’t what I had hoped for.

The whole way home, surprisingly (or not, really) JJ kept offering to trot and walked WITH A PURPOSE towards the cross country field. I think he thought he was still going to get to play. That kid really is too dang cute. 😉

So, yeah. I’m disappointed for sure as I had really hoped for a stress-free, relaxing, fun day and it turned into a total bummer, but… at least I got to spend some time with my best boy and he got to have some gallops. Or something. And, yes, I was definitely embarrassed for having to need “rescuing” and for being such a “badass” in first flight and then basically failing to finish. :'(

Always be grateful for a sound horse and that it wasn’t worse, and that you’re not the one they’re holding the benefit for… And hope that 2020 is an easier year with more fun and fewer pulled shoes.