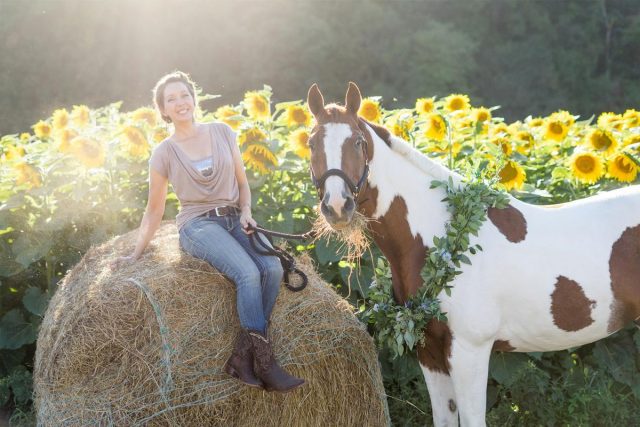 “Stop putting it off. Save smarter, hustle harder, spend strategically. You can always make more money, but you might not always be able to make more time or more memories – make the most of it while you can. And make sure you take the photos.” 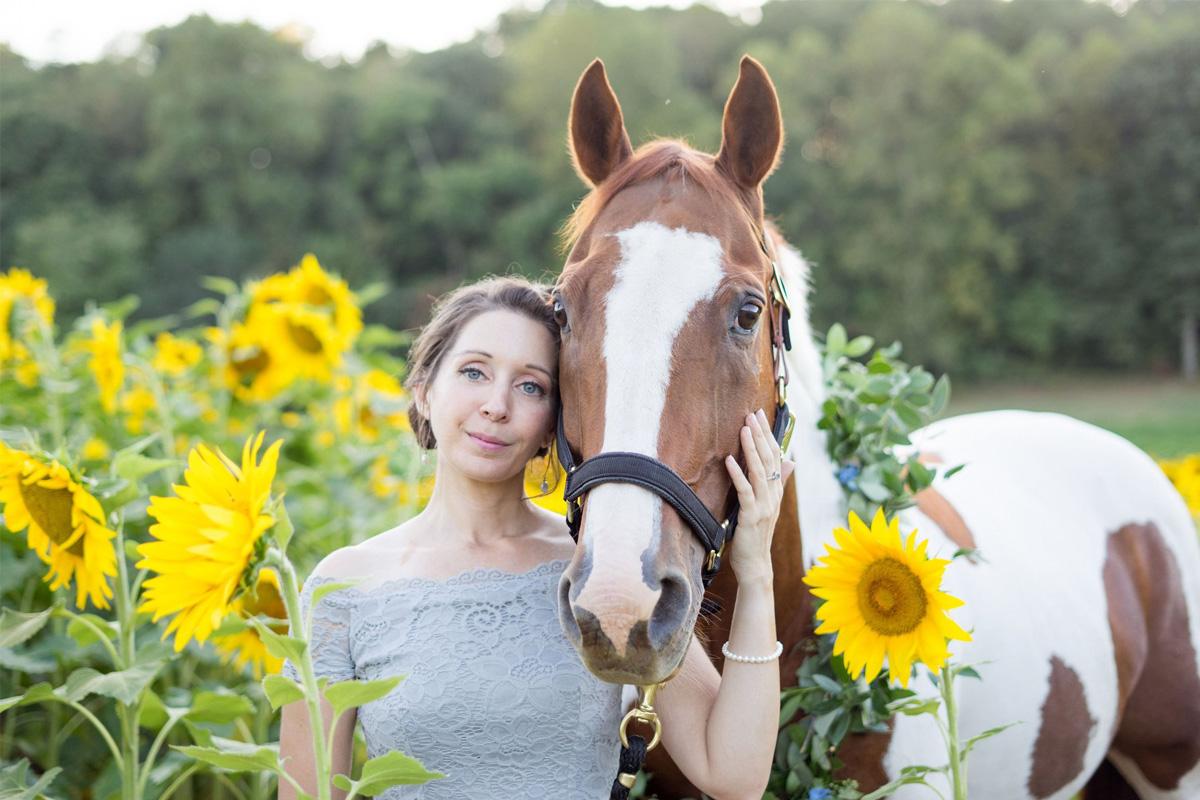 I’ve always drooled over the pretty pictures my friends’ post on social media of them and their horses, beautifully posed and looking like magazine stars.

Several years back, I met a local equestrian photographer here in Atlanta, Erin Wheeler of Sweet Fresno Photography, and her signature style quickly became a favorite of mine. I had dreamed of doing a shoot with her, but finances and adult-y responsibilities (mortgage, vet bills, show fees, etc.) seemed to always come first and it never happened.

Earlier this summer, Erin posted a contest on social media to promote her offerings. Wanting to help my friend get the word out about her business, I happily shared, commented and liked – I never intended to win nor did I care to, I just wanted to help a talented person get recognition.

Well, fate rewarded me and, surprisingly, Erin randomly drew my name from all of the entries as the big winner of a photo package! WOOHOO! It was finally time for me and JJ to have our very own photo shoot, and, since I am fortunate enough to have tons of really awesome, high-quality competition photos already (thanks to my husband, Erik), I wanted to make the most of this opportunity and do something special and a little unusual.

I was thinking of locations and remembered there’s a sunflower farm not too far from me that allows horses and photographers. PERFECT! I talked to Erin about it and she was really into the idea, so I started planning.

The search for the perfect outfit was tough, not gonna lie. I ordered (and returned) about a dozen dresses before ultimately finding something on Amazon of all places. A gorgeous dusty gray, off-the-shoulder, lace dress was all kinds of “yes,” and I accented it with a rhinestone sash, also from Amazon… grand total of about $50. 😉 Next, I raided my closet for another outfit, since Erin generously said we could shoot two different “looks” and I wanted to honor JJ’s heritage as a stock horse with a pair of cute cowgirl boots and something a little more country-casual. 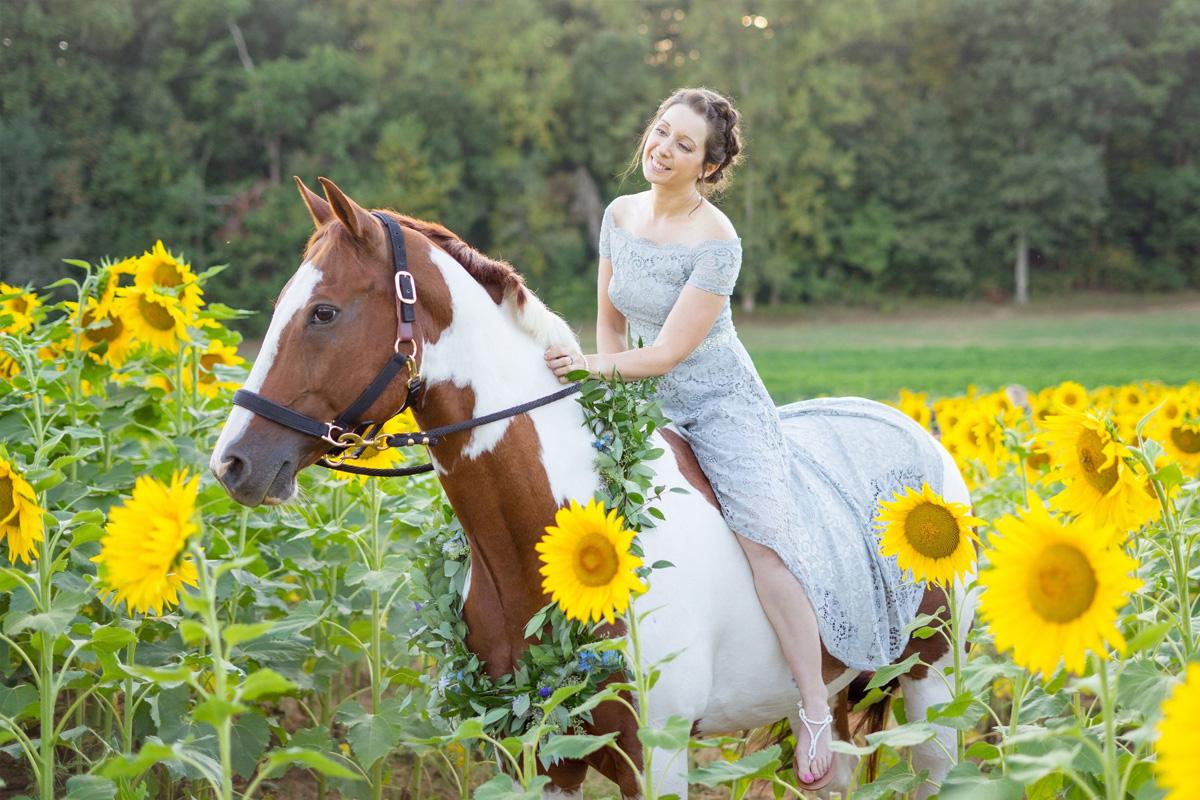 He looks like a million bucks. Photo by Erin Wheeler/Sweet Fresno Photography

Months went by as we waited for the sunflowers to bloom, and finally it was show time! I also bought a new black halter and lead (he needed them anyway since the clip on his old purple halter broke) for JJ so the colors wouldn’t clash, and kept them at home where they wouldn’t get dirty beforehand.

A few days prior, I started working on JJ. He got his bridle path clipped, fetlocks trimmed, his tail shaved and banged and his mane pulled. The night before, I loaded my trailer, stuffed and hung a hay bag, then gave him an epic bath and covered him from head to toe in that awesome dirt-repellent shine spray stuff, tucked him in for bed and told him ‘please don’t sleep in poop.’

Knowing I could handle my own makeup but not my hair, I had booked an appointment at a local salon for the morning of. I was told the appointment would take about 45 minutes and planned out a (very) detailed timeline based around that. Unfortunately, it wound up taking nearly two hours as the stylist completely disregarded my requests for something “loose and ethereal” and ignored the pictures I had showed her of the intended style.

After three failed attempts and something that looked like bad ‘80s prom hair, the stylist literally gave up and walked away without even saying a word to me. At this point, I was starting to sweat – literally and metaphorically. After a few minutes of stressful waiting, though, a second (and third) stylist came to my chair to completely start over and try to work a miracle in a matter of minutes. They did a good job, but I was feeling the pressure at that point as we had set the schedule around sunset and time waits for no one. 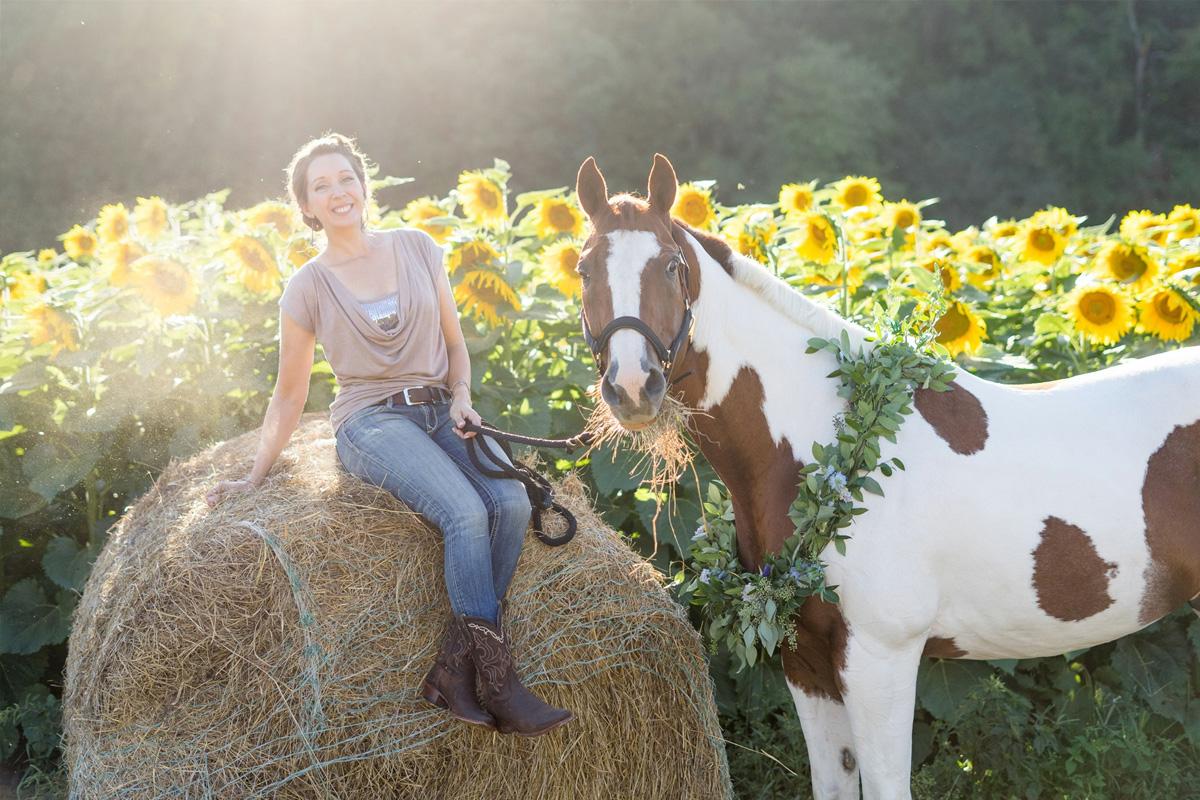 I love that he’s got a giant mouthful of hay. Photo by Erin Wheeler/Sweet Fresno Photography

Guess what? Finally, it was “good enough” and I headed home to stuff breakfast/lunch/dinner in my mouth all in one meal and to throw on a full face of makeup in less than 15 minutes. I grabbed the bag I had packed the night before with all my clothes and breathed a sigh of relief that I had built in enough buffer time in my schedule that, despite the salon delay, I was still on time.

Somehow, there was a huge turd stain on his white butt, so I had to quickly hose him off and spot-clean a few other areas. No big deal, though, since I knew he would get right on the trailer and we could hit the road.

Except that he didn’t. He flat out refused to load, did his best stubborn mule impression, and through trying to work him on for a half an hour, I felt the pins in my hair start to fall and everything start to fail.

I was this close to crying and giving up, because I had so carefully planned the most epic photo shoot ever and the day that was supposed to be so much fun had been insanely stressful instead.

I was literally taking my shirt off to put over his eyes as a blindfold in a last-ditch-effort final attempt to load when the awesome barn manager showed up (I had been alone until then). Embarrassed but grateful, I buttoned myself back up, and, magically, JJ got right on the trailer. Oh, the joys of horses…

The stress didn’t end there, though. I set my GPS for Fausetts Farm as we pulled out of the barn and it said the trip would take 30 minutes. Well, 45 minutes later I “had arrived” in the middle of nowhere. Turns out, Google changed my destination and rerouted me without ever saying anything (I hadn’t touched my phone the entire time since I was driving, so I have no clue how that happened) and we wound up in the completely wrong place. So, I turned around and drove another 20 minutes back to where we needed to be, trying to stay ahead of the sunset the whole time, and somehow maneuvered the world’s sketchiest three-point-turn with my trailer on the side of a cliff and managed not to drop over the edge.

Finally, WE MADE IT. 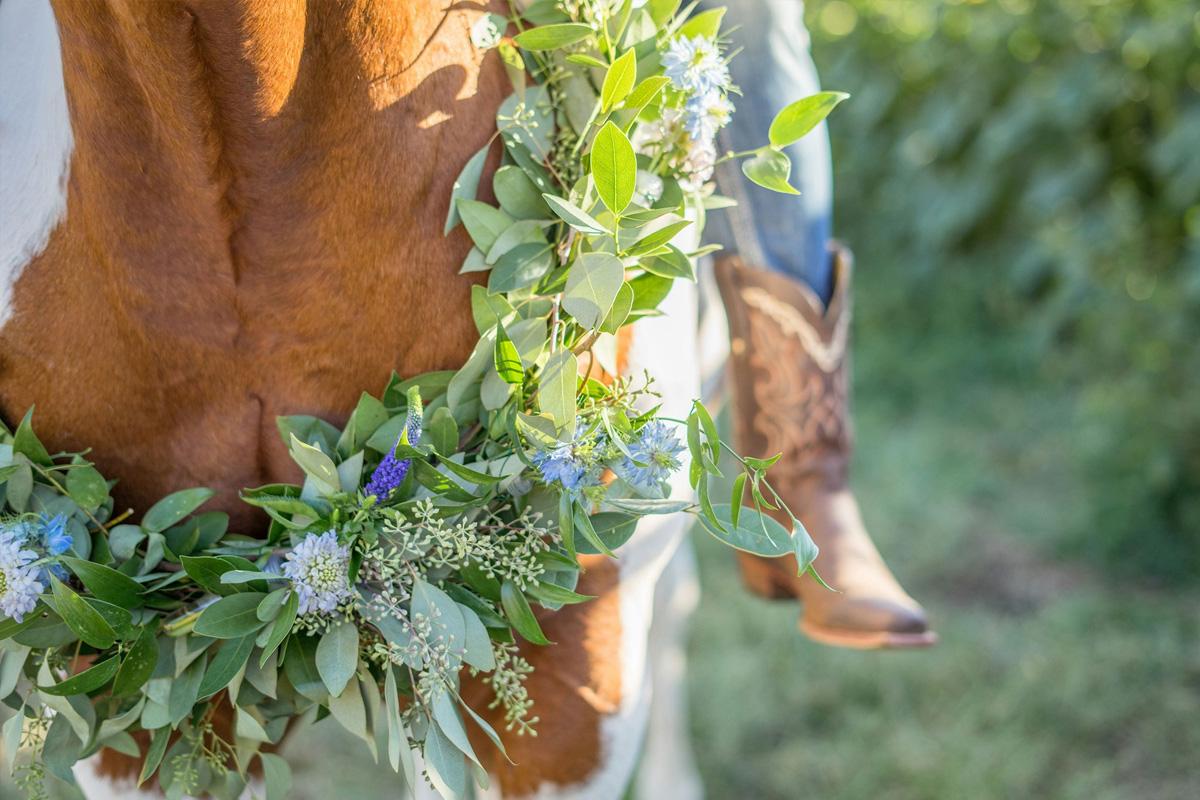 She was right, of course, and everything worked out perfectly in the end. 🙂 Erin had already arrived by the time I pulled in, so I got JJ off the trailer, did a quick grooming, and hurriedly changed into my first outfit. I was still stressed as hell and definitely NOT relaxed and happy like I should have been for a fun, carefree photo session, but she did an amazing job of calming me down and convincing me we still had plenty of light.

The shoot itself was easy and fun, and Erin smartly brought lots of peppermint “bribes” to get happy ears from JJ since he usually doesn’t cooperate for photos. He was a total star and settled in so quickly despite the strange environment and massive flowers that kept tickling and poking him.

Overall, the stress and frustration of everything leading up to the actual shoot was so totally worth it, because Erin captured some truly amazing, absolutely incredibly, beautiful once-in-a-lifetime images for us, and for that I am eternally grateful.

A friend told me recently “you do all the things with JJ that the rest of us wish we could do,” and that made me wonder, ‘well, why don’t you, too?’ He’s my first horse so yes, I want to do all the things I’ve spent a lifetime dreaming of doing – go do clinics with the masters, compete at the AECs, book a fairy tale photoshoot, HAVE FUN – but what’s stopping YOU from doing that?

To see all of our photos with Erin Wheeler and Sweet Fresno Photography, CLICK HERE.

Stop putting it off. Save smarter, hustle harder, spend strategically. You can always make more money, but you might not always be able to make more time or more memories – make the most of it while you can. And make sure you take the photos.