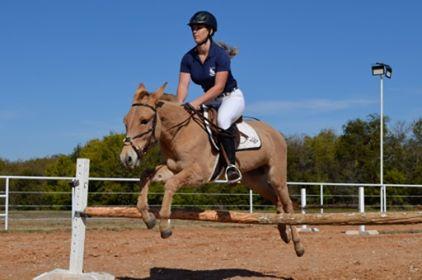 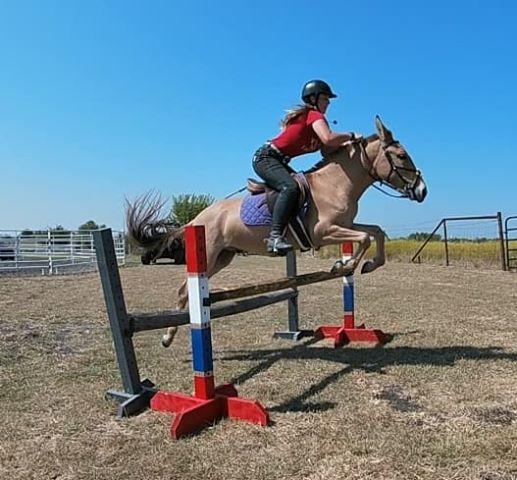 Who says mules can’t jump? USEF and the USHJA, apparently. However, Katie Wettleland and her mule Mjölnir are looking to change that.

In 2016, a rule change that would allow mules to compete in all classes in all divisions was proposed to the United States Equestrian Federation (USEF). The proposal was turned down unanimously.

Under USEF rules, mules are not considered horses and, therefore, cannot compete in affiliated events. Some disciplines such as endurance, combined driving and dressage allow mules to compete at USEF sanctioned competitions, but other disciplines (such as eventing and jumping) do not. The reason behind this rule is unclear, but there is some conjecture that it is because of the potential for mules to distract the horses. 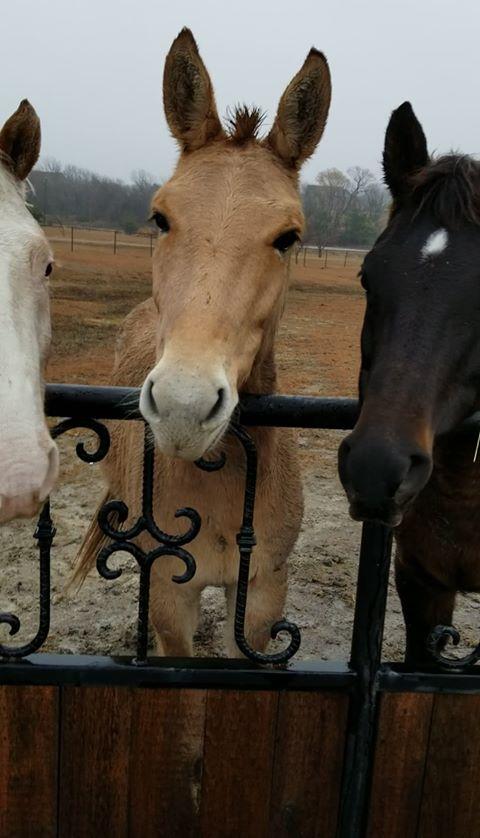 Mjölnir and his horse pasture mates. Photo by Katie Wetteland.

Despite the prejudice against mules among many of the governing bodies in the English and Western worlds in the United States, some mule owners are pushing back on the ban in the hopes of being able to show their mules at sanctioned events. Katie Wetteland is one such rider. 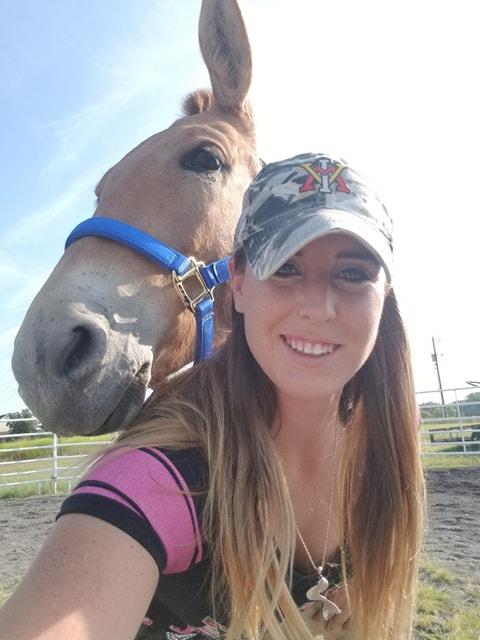 Wetteland is a lifelong equestrian who grew up showing her Dutch Warmblood/Thoroughbred cross in jumping. However, when she was at the Virginia Military Institute, Wetteland said she “saw this adorable mule from a distance and fell in love.”

She spent the next five years learning everything she could about mules and caring for them. She decided to get her own and found Mjölnir on Facebook — an untouched two-year-old that, despite being unhandled, seemed people friendly. After a 10-hour roundtrip drive to meet him, she owned him within a week. 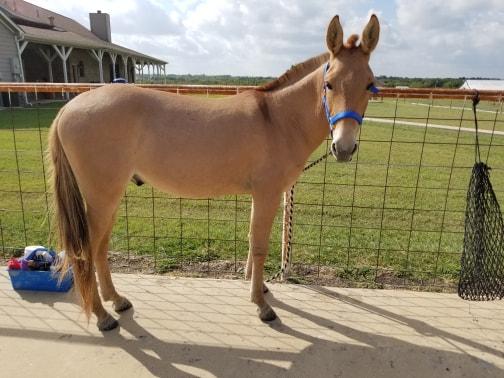 Mjölnir was named for three things. First, Wetteland wanted to pay homage to her Norwegian heritage. In Norse mythology, Mjölnir is the hammer of Thor and, as such, is one of the most fearsome and powerful weapons. That’s the second inspiration for the name — it’s a nod to mules’ legendary ability to kick with power and precision. Finally, the name is a play on words since most Americans pronounce Mjölnir as “mule-near” (see what she did there?).

Wetteland trained Mjölnir herself. From basic halter breaking to riding, he took to each part of being handled and trained easily. As someone whose heart was in jumping, Wetteland asked herself, “Why not make him a jumping mule?” She had free jumped him and he seemed willing under saddle. 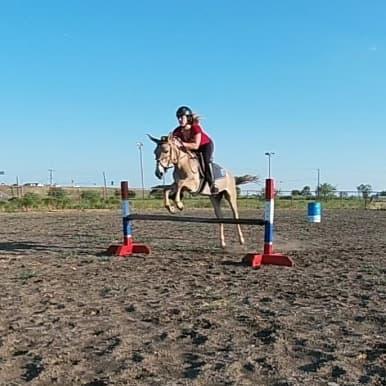 Wetteland’s initial goal was to take Mjölnir to shows geared toward mules or mules and donkeys. However, after learning that the United States Dressage Federation (USDF) allows mules in competitions at lower levels and with rules specific to mules, she set her sights on the United States Hunter Jumper Association (USHJA).

USHJA is an affiliate of USEF, which means it is governed by USEF rules. Therefore, mules are not considered horses when it comes to jumping and may not compete. Wetteland hopes to change that by submitting a proposal for a rule change to USEF in 2020. However, proposing a rule change as an individual isn’t as simple as it sounds.

In order to submit a proposal for a rule change to USEF, the proposer must be a lifetime member or have been a member for five or more years. For those looking to include mules, this can be problematic as it is likely that many USEF members are not mule owners and vice versa. Mule owners have little incentive to pay dues into USEF since there is not much probability that they will be able to reap the benefits of their memberships.

Further, not all proposals are brought to a vote. Some are dismissed due to similarity to past rule changes or, perhaps, lack of support. Therefore, Wetteland is working to gain enough backing for her proposed rule change through crowd-sourcing. She has started an online petition to allow mules to compete in the USHJA jumper divisions on Change.org in an attempt to build momentum for the proposal. Ultimately, she hopes to get the backing of individuals or an organization with enough clout to catch USEF’s attention and bring the proposal to a vote.

Wetteland is sure that mules can compete alongside horses. “Afterall,” she stated, “jumpers is just putting skill against skill. There is no judging involved, no scoring. It’s just the timer and the team.” 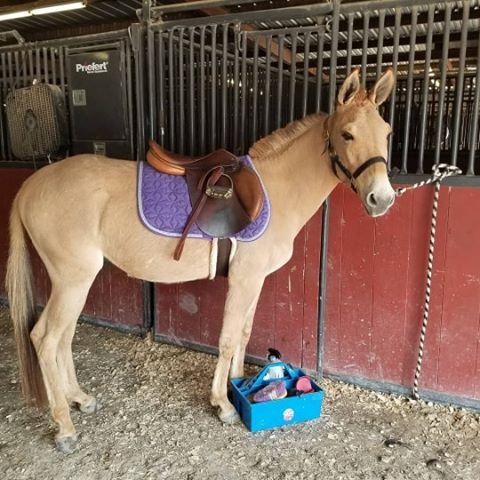 Drawing inspiration from the way that USDF allows mules to compete, Wetteland is hoping that USHJA will admit mules in sanctioned competition at lower levels and with a specified set of rules. On her Change.org site, she writes, “I propose that mules should be given a chance to perform at low level, local shows under specific rules, to hopefully facilitate the inclusion of mules into all areas of English and Western riding.”

Wetteland does not want to approach her proposal without evidence to support her conviction that mules can and should be allowed to compete with horses. Therefore, she has made a point to take Mjölnir to local, non-sanctioned events to prove mules’ capabilities. At their most recent show, Wetteland and Mjölnir placed second in the 2′ class. 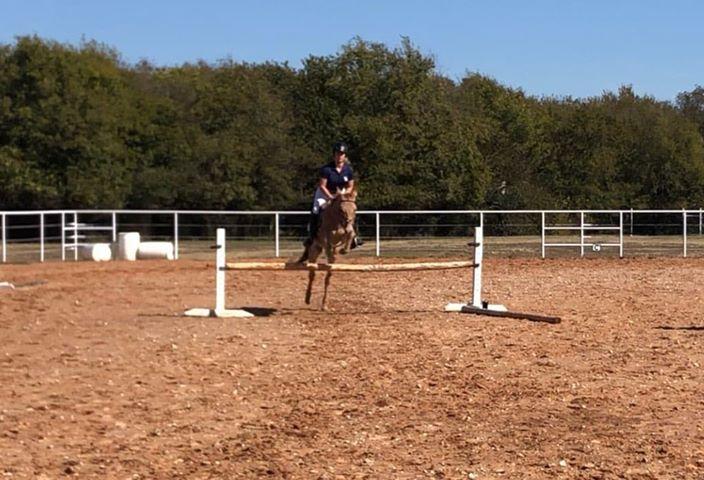 Katie and Mjölnir in the 2’3 division at a local show. Photo by Alexandria Spaller.

More than anything, it seems that Wetteland and other mule owners want their equines to be given a fair chance. She says, “They are literally half horse. In this time of inclusion and celebration of diversity, I hope their time has finally come to stand on equal ground.”

If you’re looking for an easy way to give something small that means so much to someone for GivingTuesday, you can sign Wetteland’s petition to allow mules to compete in USHJA jumper divisions here. 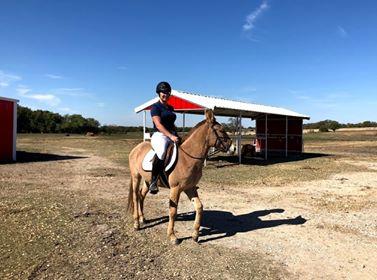