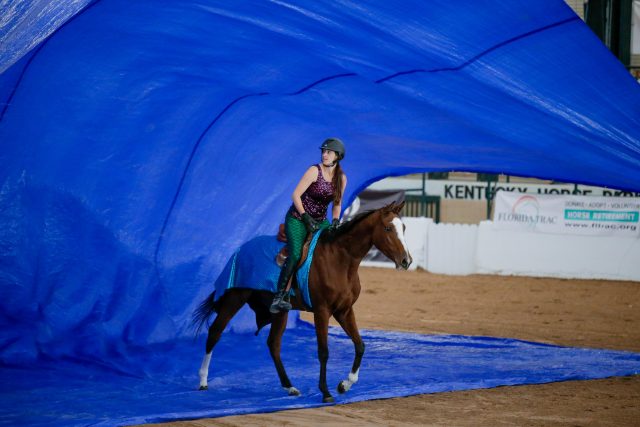 Lindsey Partridge talks about her trip to the Makeover, where she competed on two horses in four different disciplines. What’s the secret? Patience. 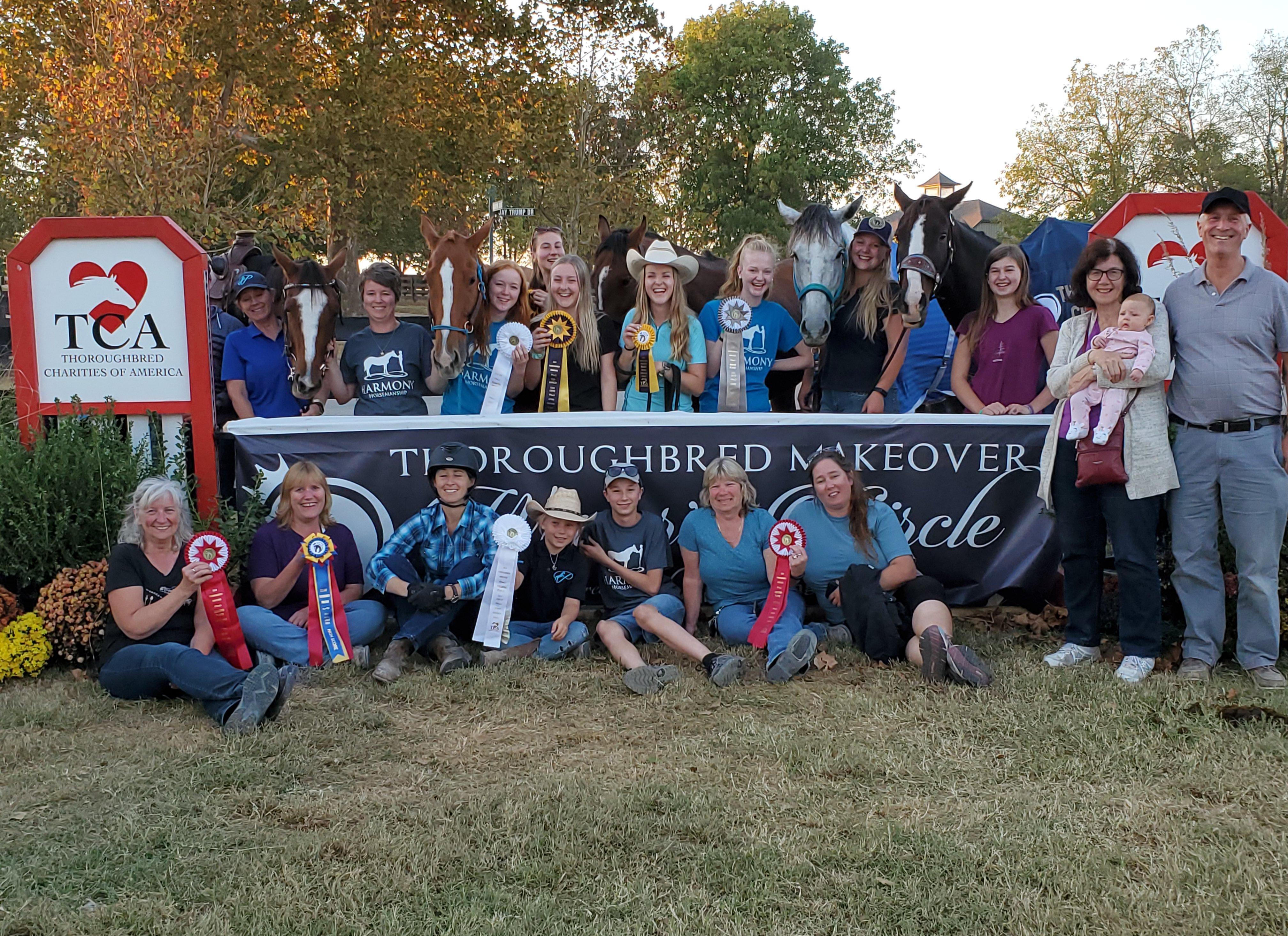 Photo by a friendly passerby who was willing to take the picture. Photo provided by Lindsey Partridge.

During October I competed in the Thoroughbred Makeover with my two horses Regina Christina (Bling) and Fairly Obvious (Fairly). I headed down with some students and friends.

When I came to Kentucky I was definitely dealing with a variety of nerves. It was my first time competing with both my Thoroughbreds while balancing breastfeeding a three-month old baby. Because of my pregnancy I wasn’t able to ride very much leading up to the Makeover. This meant my horses were coming to the Makeover with less training than they typically do — about 30 rides or so each.

Also, due to my truck troubles, they had a lot less off-property experiences. I wasn’t able to do any of the off-site experiences that I had booked in the last couple weeks before the Makeover.

So, I headed down to the Thoroughbred makeover just hoping to have a good time, and hoping that I live up to my reputation of making the finals.

On Tuesday during schooling, I asked Fairly to lie down. This is one of the tricks I wanted to do during our Freestyle. I did a few other easy things first, and then gave the cue to lie down. Fairly was oddly hesitant about lying down. Usually it is a pretty easy task for her. I could tell she understood what I wanted, but for whatever reason she just wouldn’t lie down.

I knew that if I wanted to get a lie down during our Freestyle, I would need to be patient and just wait for Fairly to do it. I actually pulled out a chair and continued to give the signal for her to lie down, but waited in the chair. It was over three hours before she finally was able to lie down. You can bet she got a lot of cookies when she finally did it.

On the Wednesday of competition I started off in Field Hunters with Regina Christina (Bling), which went really well for our flat class and our individual test. There was a very tricky log down a steep hill to a creek up to another log that my horse was one of very few not to refuse, so I was super proud of that. Bling had not seen water obstacles in about a month and she still went through the water confidently, which made me really happy.

Then it was time for Freestyle with Fairly. My hope was to ride the entire routine bridleless, but I didn’t put in the miles that I had hoped for. The Freestyle competition requires the horses to complete a large figure eight and large canter circles. Although I can ride her bridleless walk, trot and canter, I wasn’t confident enough that we could ride the compulsory tasks nicely enough for the competition. Therefore, I decided to ride with my bridle on.

Luckily my patience paid off and Fairly lay down for the routine… although a bit later than when asked. I was very proud of her and later I found out we ended up sitting second place in the Freestyle by just a few points.

Thursday was a hectic day as I started off with a mock hunt with Bling, followed by Competitive Trail with Bling. Then in the afternoon I had my flat pattern for Ranch Work with Fairly, and then later in the afternoon I had my trail pattern with Fairly for Ranch Work. It was my first time ever competing in Ranch and I just wanted to try it because it looks like so much fun.

I was a bit nervous heading into the trail pattern for Ranch because Fairly didn’t get to go to the cow clinics that I had booked in the last two weeks before the Makeover, so she actually only had two off-site cow experiences before coming to the Makeover … and we had never sorted cows.

I was so incredibly proud of her because she did everything perfectly and we were able to do the gates and the cow pen so well.

Later that day I found out that we ended up finishing fifth in Field Hunters for the preliminaries with our combined score, second in Freestyle, first in Competitive Trail and, to my surprise, first place in Ranch Work with Fairly! 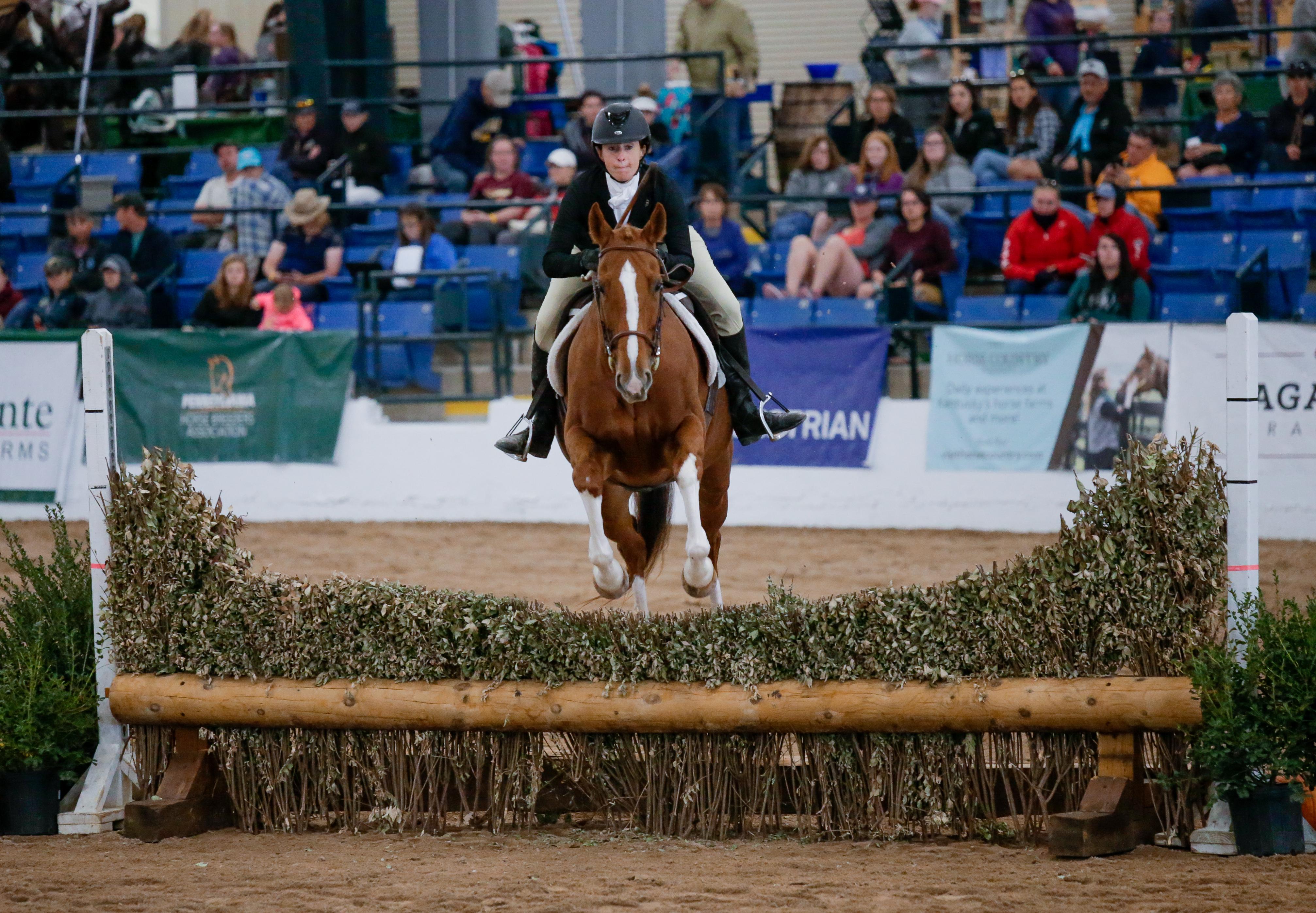 When I realized that that meant that both of my horses had qualified for the finals in both of their divisions, I was very excited but also a little bit overwhelmed.

I love the disciplines in which I competed this year. Freestyle is fun because you get to be creative and show a variety of skills, Field Hunters is challenging because we have to be brave over the cross-country course and precise as we navigate the gates and other tasks, Competitive Trail really tests bravery and patience among other things and you never know what you’re going to be faced with, and Ranch Work also tests a lot of bravery and precision.

Luckily we had Friday as a day to compose ourselves and also give me a chance to follow up on some leftover business with my truck that had been left in Kentucky from my last adventure for the Mustang Makeover.

Saturday was finale day. I started off with Field Hunters, for which I was super relaxed. It was almost comforting to know that I was sitting in fifth in the finals because I knew the worst I could place was fifth.

Bling gave me our best jumping round yet, including two clean flying changes which is something that we had been struggling with throughout the season. I was over the moon excited that we moved into fourth place after the finale.

Next was Freestyle and Fairly and I made a few modifications to our routine. This time she lay down on time, and at the very end I took off my bridle just to do a bit of bridleless once I made sure all my compulsory tasks were complete. We improved our score from our preliminary round and finished in second place. 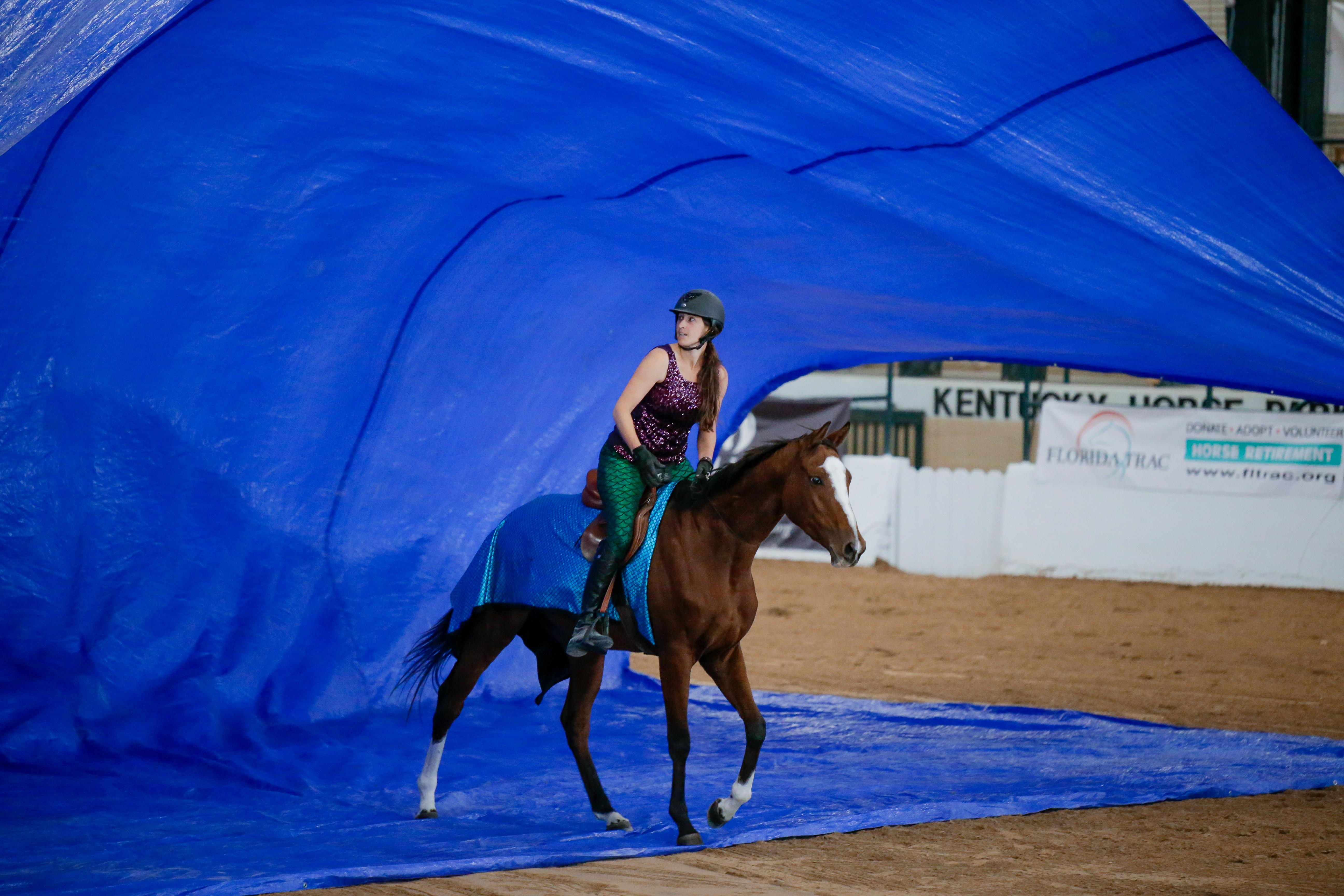 Next was Competitive Trail, which was the one I was the most nervous about because I had the most to lose and also expected to do well here. I think I was also struggling a lot with my adrenaline spiking before the competition and then having to go all day. Plus I don’t typically eat on competition day because I get too nervous, but I am not used to that while breastfeeding.

I was feeling very light-headed. I wasn’t doing too well at the in gate, so the ring steward kindly gave me a cookie and some water to try to perk me up a bit. My nerves ended up going into Bling and although we completed all of the tasks, it was definitely not as relaxed as it could have been. We ended up dropping into second place, but the winning round was absolutely stunning.

The last event was Ranch Work. For this finale I was not nervous because I had never sorted a cow before so I wasn’t expecting anything. Really, I was just looking at it as an opportunity to have fun. When it was our turn we went in and had a blast.

I was impressed that Fairly was confident and relaxed around the cows. She moved them around easily. We struggled to get our number nine cow who kept sticking to another one stubbornly.

We dropped to fourth place but felt honored to be among such great cowboys and cowgirls and had so much fun that I may just have to try it again another year!

I am over the moon proud of my horses and I think it’s kind of funny that my girls ended up matching with a second and fourth place each. They also both won their state bred awards, Bling being the top bred New York horse and Fairly being the top bred Pennsylvania horse.

A huge part of my success I attribute to patience. For instance, Fairly needed me to be super patient for her to lie down. I do that when training for obstacles, when asking for a slow canter, etc. I ask and then allow the horse time to think through the request rather than being emotional about it.

At many horse shows I see riders losing patience with their horses — and the result is usually a braced horse that can’t perform at its best. I try to imagine myself in the horse’s hooves: if I were unsure about something, what kind of guidance would help me succeed? I want to be that patient and encouraging teacher for my horses.

I really love the Thoroughbred makeover, especially the finale. It is something to take in because you get the five best horses at the finale and you get to see 10 different disciplines. Each one is different from the other and it’s so fun to see everything in one day. Definitely put it on your calendars for next year.

I am super appreciative of my team and my parents because it would not have been possible without them. My parents watched Evelyn a lot during the Makeover and my team of friends and helpers made it possible for tack changes to happen on finale day as well as pull off an amazing Freestyle. 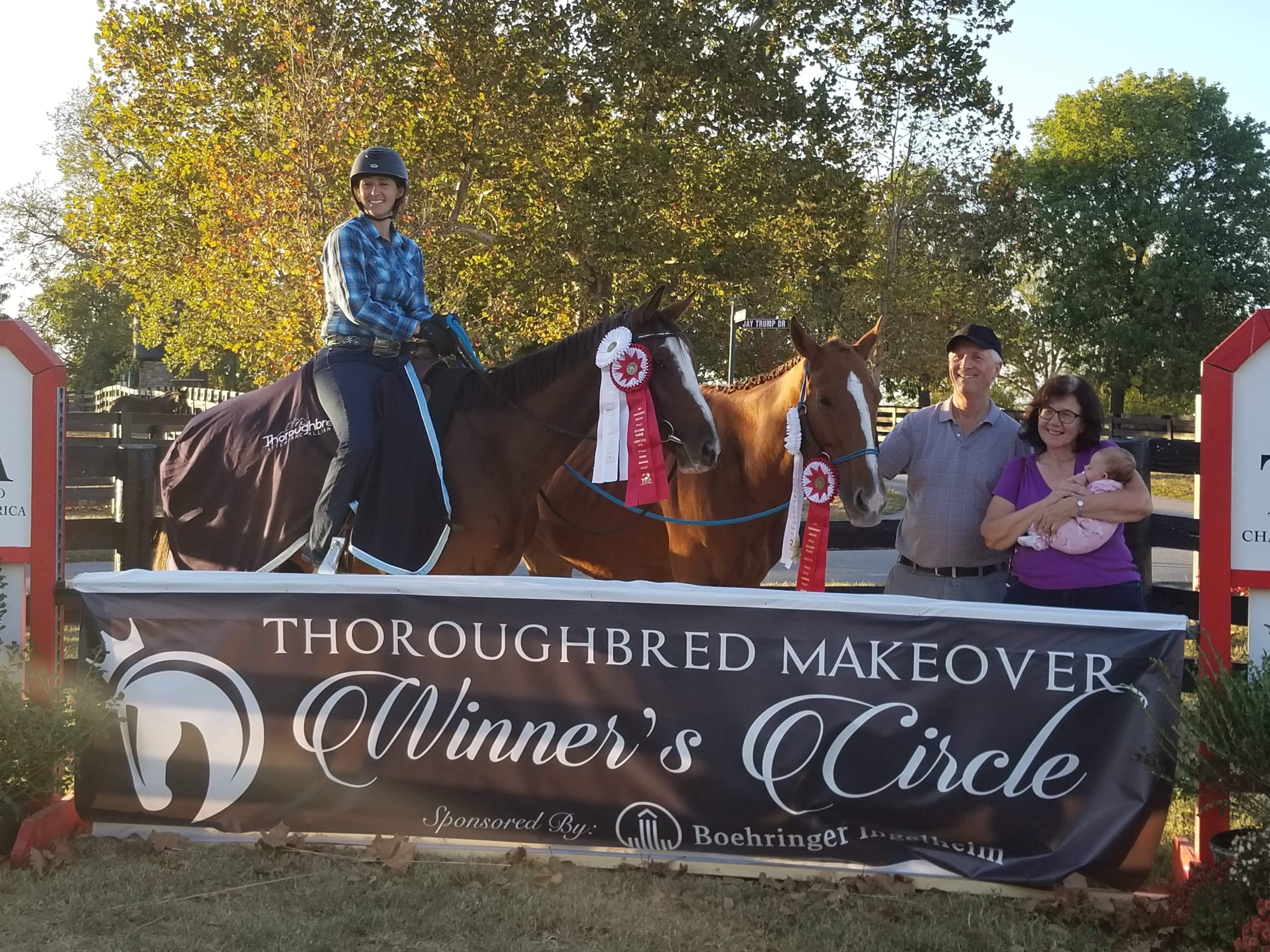 Photo by a friendly passerby who was willing to take the picture. Photo provided by Lindsey Partridge.

The next adventure will be taking Kaibou to the world championships for extreme cowboy racing! You can bet that if he is nervous about something that I will take the time I need to get him to do it well.