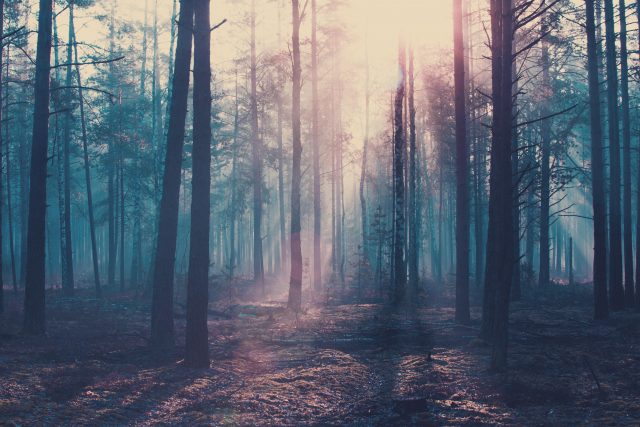 October 30, 2019DeAnn SloanReader Submission#HALLOWEENComments Off on The Lost Horse of the Pine Barrens

In honor of Halloween, Horse Nation held a spooky short story contest, calling for readers’ best horsey tales of horror (and humor!). We’re sharing our favorites and here’s one of our picks.

“What’s up?! It’s Phineas! You voted and here we are in the Pine Barrens just a couple of hours before Halloween!”

Phineas, a popular YouTube vlogger, talked into his night vision camera. This was his first year ever trying something like this and his nerves were quickly replaced by the excitement of knowing that this could finally get him a million hits.

Phineas continued, “The Pine Barrens are labeled as one of the most haunted places in America. It’s got it all — two-headed snakes, the Jersey Devil, numerous ghost stories, a few ghost towns and plenty of legends and tales. I can’t wait to see what we are going to find out here! I just hope I make it out alive.”

Phineas stopped the recording so he could get his bearings in the shadowy forest. He first reached into his backpack to set up his GoPro chest mount and then reached in again for a flashlight so he could study his map. The Pine Barrens were massive, spanning close to a thousand acres. If he didn’t triple-check that he was staying on the trail, he would be lost for days. Phineas pressed play on his GoPro and pressed record on his camera again.

“Alright, it’s currently,” Phineas checked his phone, “10:14 p.m. We’re heading towards the remains of one of the old factories.”

Phineas didn’t want to admit to the camera, but he was starting to get some weird vibes. He kept on thinking that he was seeing things out of the corners of his eyes. He quickly brushed it off though, figuring it was just all the Halloween mumbo-jumbo getting to his head.

As he walked the path, following the light of the flashlight, he rambled on to the camera, retelling one of the legends of the Pine Barrens. Phineas tried to focus but every snap of a twig or rustle of a bush made his heart beat that much faster. He knew that it had to be just squirrels, right?

He was on a ghost hunt for his YouTube channel, but Phineas really didn’t believe in all that stuff. This was just for fun and for the views. Once Phineas reached the crumbling foundation of the old factory, he turned so his back was to the old remains.

“Here we are! Do you think the Jersey Devil will make his appearance? Let’s -” Phineas started to step back as he spoke, but he went stone-cold when his back unexpectedly made contact with…something?

Already feeling on edge, Phineas jumped forward instinctively and spun around to find a young girl, lit up by his flashlight. Something was off about her; her hair was lighter than the lightest shade of blonde, her skin so pale it was almost translucent and her eyes were so dark you couldn’t see her pupils.

For a moment, Phineas was starting to question everything he believed. There before him was a ghost. A real ghost. And he was getting it on camera.

“Excuse me, Mr.? Can you help me?” She spoke softly. He noted that the young girl was dressed in breeches, tall boots and a warm black coat, only knowing that because his little sister dressed like that for her horseback riding lessons.

“Are you mute?” She asked, more sternly this time.

“It’s Phineas.” He composed himself, feeling more relieved than he should be knowing that the girl, while strange, was real. The world was right again. Now the real question was what was this girl doing in a haunted forest at this hour of the night. “How can I help?”

“Nice to meet you, Phineas. I’m Kritanta.” She reached out a gloved hand and Phineas shook it. “My horse ran off a couple of hours ago and I can’t seem to find him. Do you mind helping me look? It’s getting late.”

“Uh…sure.” Phineas glanced at his camera. “Change of plans! We are now looking for a lost horse. Kritanta, what does your horse look like?”

“Arion is all white. He’s super fast and can be anywhere by now. Having an extra pair of eyes is going to make it a lot easier.”

Following a girl into the dark and spooky forest was not what Phineas expected to be doing. He had a hunch about this, a feeling that he couldn’t explain in his gut. Either way, he couldn’t leave Kritanta alone out in the forest by herself. He knew bad people sometimes hung out in the heart of the Pine Barrens.

With that as a thought, he wondered if he could trust her? He was starting to question her intentions as she led him off the main trail.

“Hey, Kritanta. Do you know where we are going?”

“Of course. Arion and I ride these forests almost every night. I know this forest like it’s my home.”

There was no sign of her horse anywhere. It was like looking for a needle in a haystack. It wasn’t possible for just the two of them to scan every inch of the Pine Barrens. Even so, they continued on their trek into the forest.

Phineas caught something out of the corners of his eyes. On both sides of him, he could see shadows, darker than the night, moving between the trees. It was just a trick of the light, the wind moving the clouds over the moon, he told himself even though the air was still.

Kritanta must’ve noticed Phineas pausing to study the shadows. “Oh, those are my friends helping me look.”

“Sure. That makes total sense,” Phineas remarked when, in actuality, nothing made sense to him. There were warning sirens going off in his head as he started to piece together the series of events that led him to this moment.

Kritanta had to be leading him into a trap. There was nothing he could do about it but continue to go along with it. Phineas wouldn’t be able to find his way out of the Pine Barrens at this point. Kritanta had gone too far off the path for him to backtrack now.

A branch snapped behind him followed by a cold breath on the back of his neck making all his hair stand on end. He slowly turned, too afraid to make any sudden movements. A huge all-white horse towered over his six-foot frame, glaring him down with ruby red eyes. Phineas could see the horses’ ribs and even his skull and it wasn’t because he was skinny. The horse was translucent, almost like his rider.

“Kritanta…I think I found your horse.”

Death sat upon her pale horse, looking down at the boy who helped her find Arion. She pulled down the hood of her black velvet cloak into which her simple coat transformed.

“Thank you, Phineas, for helping me find Arion. He can be so silly at times. For trusting me and finding Arion, I grant you an extra life. I will see you again someday.”

The darkness engulfed Death like a blanket and in the blink of an eye she and her horse were gone.