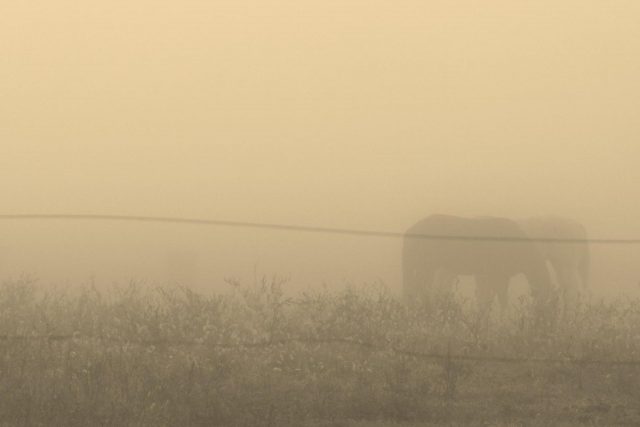 October 29, 2019DeAnn SloanReader Submission#HALLOWEENComments Off on The Mystery of the Hay Tarp Ghost

In honor of Halloween, Horse Nation held a spooky short story contest, calling for readers’ best horsey tales of horror (and humor!). We’re sharing our favorites over the next three days — here’s one of our picks! We’ll be reading some of these tales on Horses in the Morning on Halloween day. 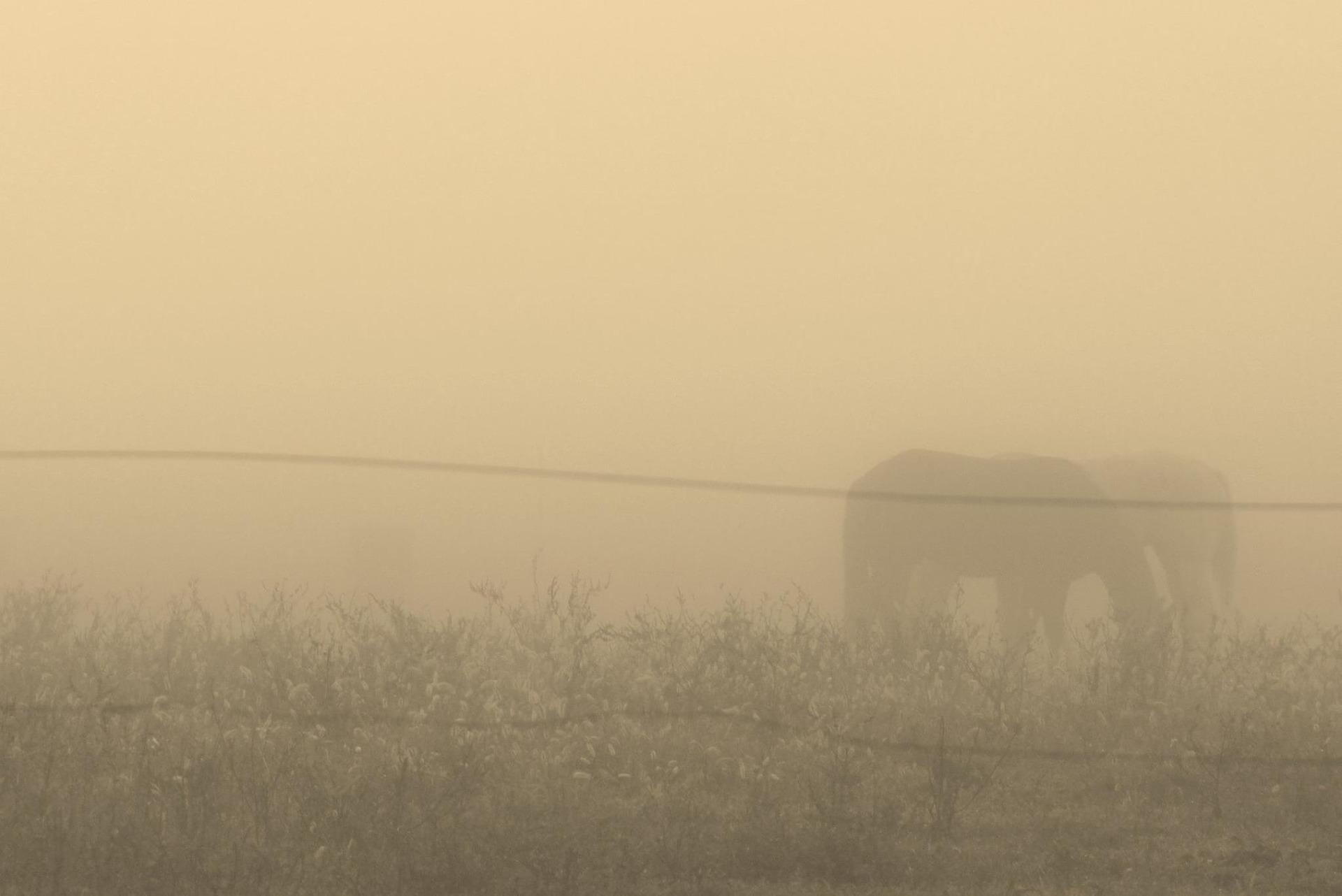 “The barn is haunted!” Sasha exclaimed, her big eyes wide as could be.

M&M, a silver grey Miniature Horse, stood wearily in the door way, then shifted his weight on his back leg and leaned against the door.

“What do you mean the barn is haunted?” he asked, yawning from a late morning nap. “Have you been drinking too much of that fermented apple diet drink again?”

The big Quarter Horse mare paused, and then gave her short boss an exhaustive look.

“For your information, M, the drink you refer to is 100% pure organic apple cider juice, enhanced with over 50 antioxidant compounds and beneficial greens. It is a way better nutritional source than that fast-food junk hay you and Tweak eat.”

“Yeah, sure,” M said under his breath, shifting his weight again on his back legs, causing the sign on the stall door to rattle softly. The sign outside read “M&T Pony Detective Agency,” but you had to tilt your head just so in order to make out the faded lettering. “So why do you suddenly think the barn is haunted?”

“Because I seen a ghost this morning!”

M inhaled a long breath, then shut his eyes and sighed. It was the morning of October 31st, Halloween, and here he was listening to his hysterical office secretary telling him she’d seen a ghost. Oh joy of joys, he thought. How had M ever let Grandpa Sonny talk him into hiring his adopted niece, fresh out of pony secretarial school!

“So, where did you see this ghost?” he questioned, not really wanting to hear the answer.

“In the arena gym, during my aerobic exercise class,” she said. “My personal trainer and I were doing a fast Pilates trot, and suddenly the tarp on top the hay crinkled, rattled and began rising up. Then it fell down to the ground.”

“Look, calm down. Are you sure it wasn’t something else? Wind? Mice?”

M glanced away. He had to choose his next words carefully.

“If it will make you feel better, I will have Tweak and Mousy go over the arena gym and check it out as soon as they come into the office.”

“And, what good will that do? “ Sasha protested. “Tweak blames everything on puddle monsters.”

“Well, do you have a better idea?” M teased with a wry smirk. “A puddle monster ghost works for me!”

Sasha snorted, stamped her foot and left M’s stall office in a huff. An hour later, M filled in his partner, Tweak, and private investigator, Mousy, on the facts of the new case.

“So, let me get this straight,” Mousy said, holding up one of his soft, kitty paws. “Sasha was in an exercise class with a bunch of other carb-starved health nut mares trying to sweat off some pounds, and they seen a ghost up on the hay pile? What are we supposed to do about it?”

“I know it sounds crazy, but I told Sasha we’d look into it,” M said. “She’s pretty upset.”

“You know,” Tweak said, “it might not be a ghost at all. Maybe it was a puddle monster looking for a place to hibernate over winter.”

“Who else was in this exercise class?” Mousy asked. “Did anybody else see this supposed ghost?”

“It was a private training session,” M said. “I called over to the arena gym, but the trainer had already gone home with a migraine.”

“So, where do you wanna start?” Mousy asked. “It’s not like we have a lot of experience chasing ghosts.”

M let out a long, frustrated breath. He was getting too old for all this nonsense and from a silly mare, no less.

Once Mousy and Tweak got over to the arena, they realized a special Halloween event was going on.

“Who ever thought of having a schooling show on Halloween!” Tweak said, smirking at one of the dressage horses going by in a zebra costume.

“Well it just might give us the cover we need to get to the bottom of Sasha’s ghost sighting,” Mousy replied, eyeing a sorrel gelding warming up his human for an upcoming driven dressage class. “Why don’t you go dig out your pleasure cart,” Mousy said, “meanwhile I will jump up on the hay and get a close look at the tarp. “

Twenty minutes later the pair met in front of the entry booth.

“Why do we have to do this?” Tweak asked, checking over the buckles on his harness.

“Because,” Mousy replied, struggling to get his kitty size helmet on, “by entering the show it lets us mingle without suspicion”

“So what do we know so far?” Tweak asked, kicking the cart tires to see if they were inflated with enough air. “We know the hay tarp Sasha seen looks normal. There were some pieces of twine tied to the ends, but that is probably to secure it when the rest of the hay is brought in for the year.” Mousy paused and glanced over at the in gate, “Come on, looks like we’re up next.”

“I don’t know what to do,” Tweak whispered as the buzzer sounded.

“Just trot down the center of the ring and I’ll tell you the test as we go. Keep watching the crowd for anything out of the ordinary.”

The pair trotted into the arena for their first (and likely their last) driven dressage test.

As they did, Tweak noticed several chickens milling about near the judge’s stand.

Tweak trotted through the corner, all the while watching the chickens with suspicion. Tweak did not like chickens. They were always clucking and pecking along like they owned the place. Tweak thought they were the most arrogant and egocentric creatures on Earth, and this bunch was definitely up to no good.

“At A trot right a 20m circle,” Mousy instructed from the cart. Tweak started the turn. Suddenly Mousy called, “Hey, what’s that?” pointing a paw towards the roof.

Tweak looked up just as Brutus, the bully barn cat leader of the delinquent kitty gang darted through the maze of rafters overhead. The twine from the tarp wrapped around his body, the large trail of plastic crinkling over the schooling ring like a giant ghost seeking revenge.

Mayhem broke out below. Horses snorted, whirled and bolted in all directions. Humans yelled, cursed and panicked. Halfway across the tarp dropped onto the chaotic scene.

“There he goes,” Mousy called as Brutus clawed down a support pole and dashed out the big door.

“We can catch him,” Tweak called out, already in pursuit at a full gallop.

Mousy dug his claws into the vinyl seat as the cart bounced wildly. Once even with Brutus, Mousy leaped out and tackled the large adolescent feline. The pair somersaulted into the side of the building with a loud thud.

After Barn security was called onto the scene and all the necessary paperwork was complete, Mousy and Tweak returned to M’s stall office.

“It turns out, Sasha seen what was meant to scare away some of rival gangs,” Mousy reported. “It seems there’s a turf war between the local juvenile cat gangs and the chicken gangs. Sasha just happened to be the victim of a Halloween prank meant to intimidate members of the chicken gang to make them think the barn was haunted and keep them away from the arena.”

“So why did they disrupt the show?” M asked.

“Well Brutus had it in for one of the exhibitors,” Mousy explained. “A Thoroughbred mare called Romance. Apparently she stomped on his tail last week and he wanted revenge.”

Everyone knew big horses were deathly afraid of plastic bags, much less a giant tarp flying above their heads. Big horses were just not as brave as mini horses.

“It serves her right,” M thought to himself, recalling a few unpleasant encounters he’d had with the moody chestnut mare known as Romance.

“Well, now that the ghost issue is settled,” he said, “let’s get back to solving some real cases, shall we?”

And so the staff of the M&T Pony Detective Agency all agreed to close the file on the case of the hay tarp ghost for good. 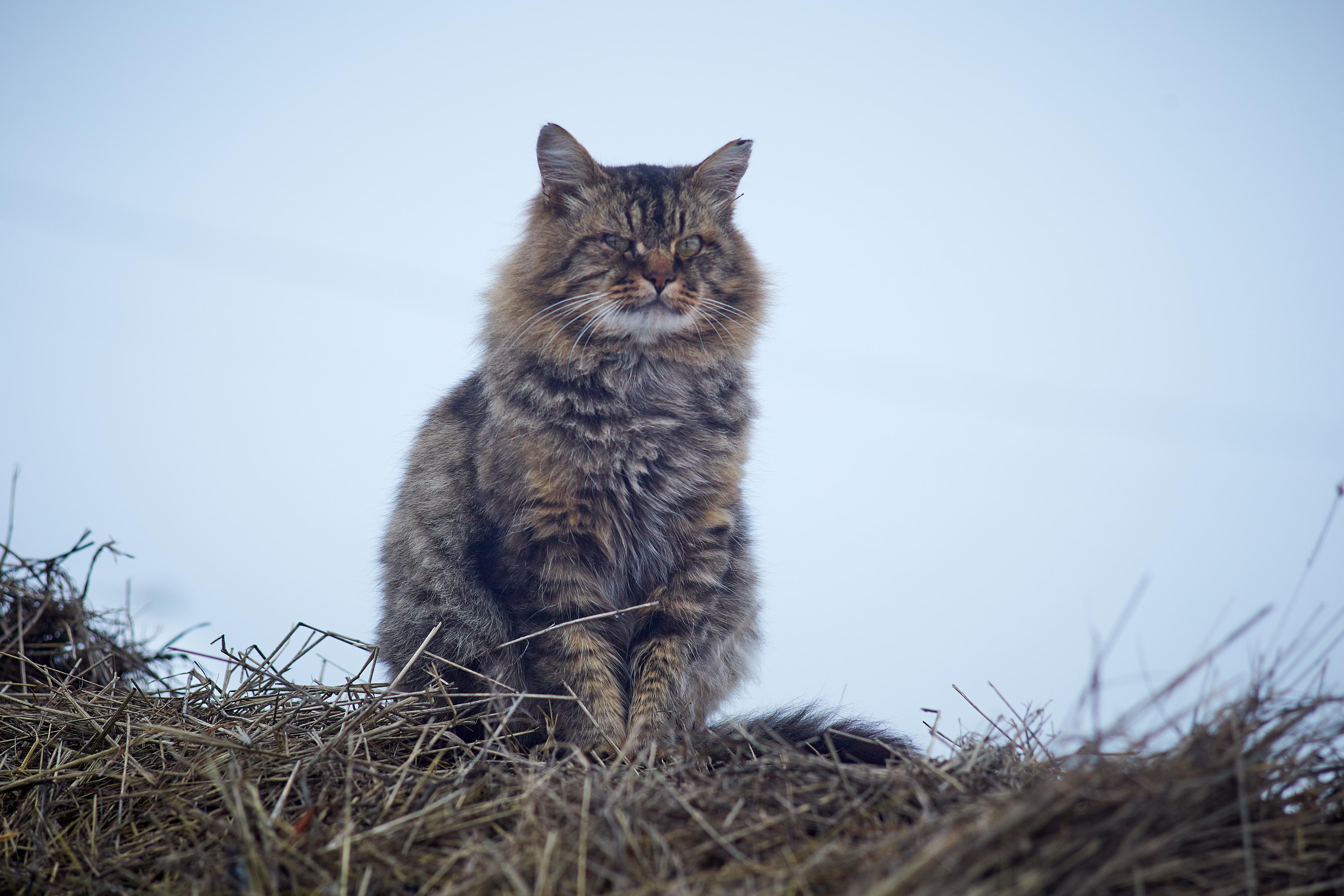