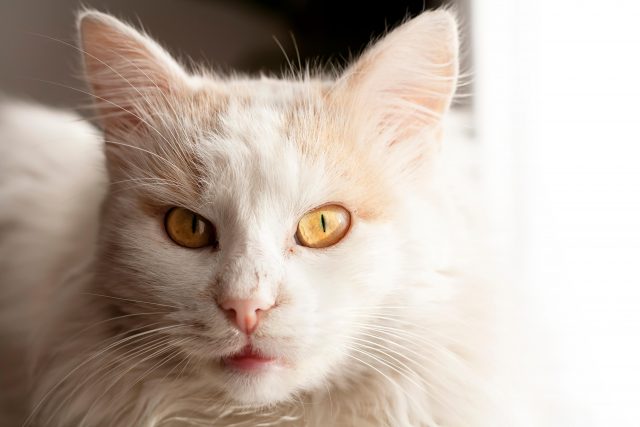 In honor of Halloween, Horse Nation held a spooky short story contest, calling for readers’ best horsey tales of horror (and humor!). For those of you who love cats, hate cats or are generally ill-at-east around them, this one is for you! 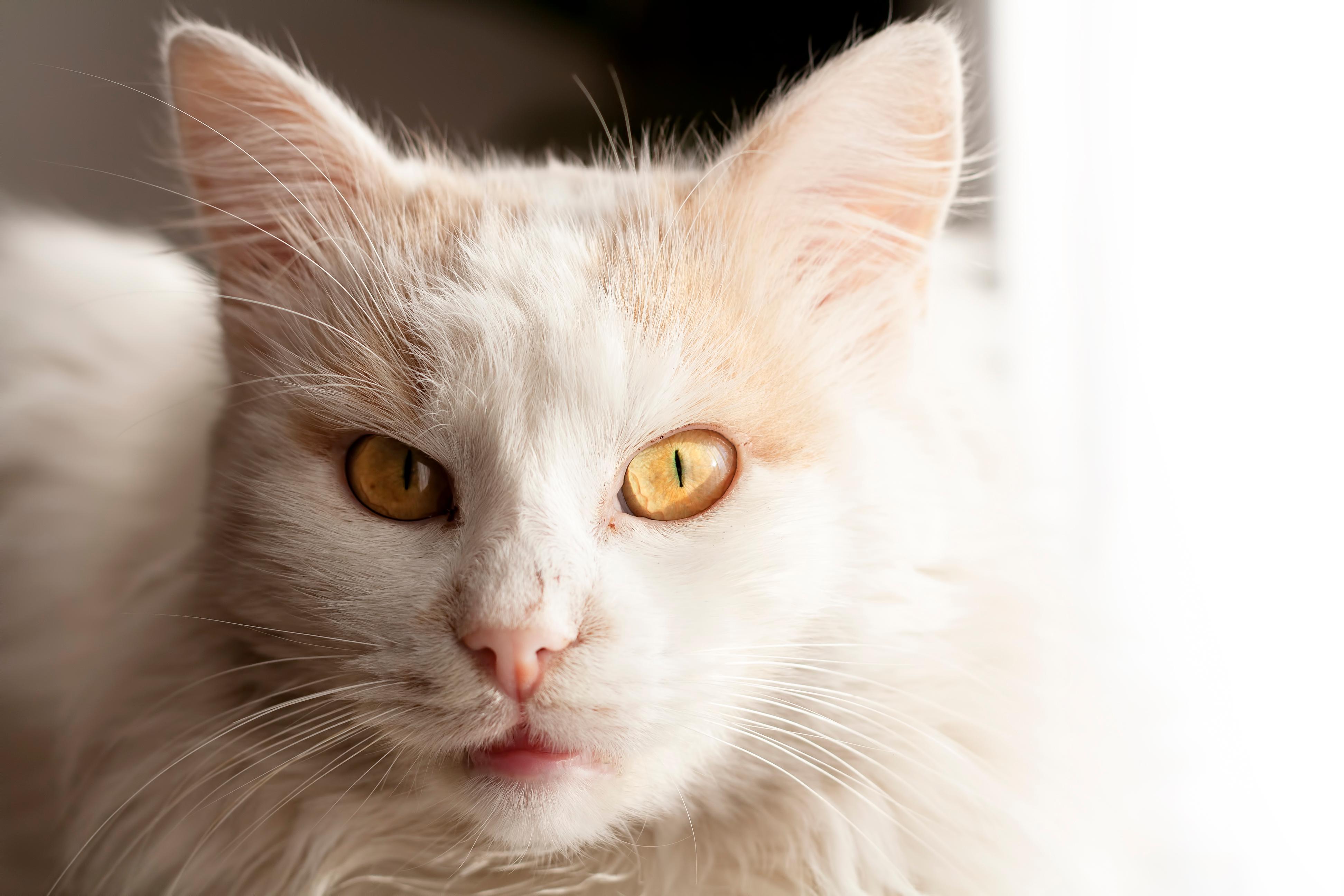 For the story you are currently reading, I neither expect nor demand credulity. But these events are true, even if you think me mad for relating them. My soul and mind have long been burdened with the memory of the phantasm. My voice incapable of telling the story that my pen attempts to reconstruct for you now.

Many years ago, when I was young and happy, my family and I moved to an old mill. The buildings were dilapidated; the bricks crumbling, plaster flaking and cobwebs clinging to the stone walls. On the property there was an old bank barn, its beams sturdy despite its age. Into this barn I moved my horse, Anansi.

One silver morning, when frost lined the grass and a heavy mist hung in the air, as Anansi was grazing in the pasture, I went in the barn to clean stalls. Carrying a pitchfork, I walked into the long, rectangular area and stopped dead in my tracks.

There, sunken into the hay, was the body of a cat. The cat was pure white. His body thin and frail as if it had shriveled post mortem. His legs were outstretched, his tail stiff, his head cocked back and his mouth and eyes open. The yellow eyes shone brightly despite his lifeless appearance. The pink of his tongue was stark against the whiteness of his teeth and coat. I leaned in closer to inspect the cat for signs of the cause of death. His body was unmarked except for one gaping sore on the cheek where the flesh was pulled back exposing his molars through his cheek.

I recoiled in horror at the grotesque wound. No blood dripped from it and no smell emanated from the cat. A feeling of dread crept into my stomach in the cat’s presence, and I used my pitchfork to pick his hardened form up and deposited him unceremoniously in the river near our mill.

For the next several weeks, life went on as usual, and all thoughts of the cat were driven from my mind. But then one morning while the mist was rising, I opened the door to go out to the barn, and from the corner of my eye I caught sight of a white cat darting through the bushes. A shudder went down my spine at the sight of the apparition, but I shrugged it off as likely being a stray that had found its way to our property, and continued with my morning chores.

But month by month I saw the cat more and more often. He would skirt around the edges of the barn. Slink under the water wheel. Appear unbidden in the field. Late at night, I would see those unholy yellow eyes peering at me from the rafters. Or I would catch sight of his tail disappearing into the woods as I rode by on Anansi.

Gradually I began to be aware of his presence, even when I could not see him. I would be riding Anansi and he would spook seemingly for no reason, but in the air I could feel a tension, and I would know the cat was there. Somewhere. I knew Anansi could feel him too. He was flightier and more unpredictable than he had been before the appearance of the cat. Sometimes he would raise his tail and scream staring off into the distance, and I would know that he was looking for the cat, feeling its presence.

One night, while throwing hay, I heard a low growl emanating from the darkness. I switched on the light, looking desperately around for the creature, but saw nothing. The hair on my arms stood on end. I knew he was there somewhere, lurking in the shadows and mocking me.

Anansi’s tension and nervousness started to show itself in his health. He lost weight, his gray coat seemed ragged and the muscles on the underside of his neck bulged. One cold, dreary morning he colicked. The vet and I blamed the weather. But then he colicked again two days later, and again two days after that. We started to suspect that he was suffering from ulcers and treated him accordingly. My vet asked me if there had been any changes in Anansi’s life that could be causing him stress.

And, knowing that I likely sounded mad to any rational person, I told him about the dead cat I had found in the barn and my belief that I was being haunted by its ghost. To my surprise, he did not laugh at me, but turned deadly serious, and asked if I knew what a puca was. At my puzzled expression, he explained that his grandmother had grown up in Ireland and told him about pucai — mythical creatures with white or black hair that appeared in rural communities as harbingers of good or evil. He advised that I should contact an exorcist as soon as possible.

Rather than be buoyed by this conversation and the vet’s belief in my story, I began to doubt my own sanity. What if I had imagined the whole thing? What if I really was insane? What if I was inventing a ghostly apparition of a cat that was haunting me? What if I just enjoyed the thrill that accompanied fear?

What if Anansi was feeding off of my tension and making himself sick?

So I read up on exorcism, to err on the side of caution, and perhaps to exorcise the demons that were plaguing me. I burned sage and sowed the stone dust at the barn’s foundation with salt, thinking of Cato’s cries of “Carthago delenda est,” and of the Romans sowing the Carthaginian soil with salt. As I sowed I chanted, “Feles delenda est! Feles delenda est!” Surely if there’s a place for Latin it’s in an exorcism? I felt foolish, but afterward it was as if a heavy weight had been lifted from my shoulders.

Anansi, too, seemed to notice a difference and started gaining weight and muscle. He calmed down and started to act more like his usual self. His coat shone, gleaming almost white, and his brown eyes were bright and alert, no longer haunted as they had been previously.

The months passed without incident and in the spring, I entered Anansi in a hunter pace. We had always loved running through the woods and jumping logs and coops. Anansi could be spirited and head-strong, but he was an excellent partner and was quick on his feet and adjustable to the jumps.

The morning of the pace, I had a feeling of dread deep in the pit of my stomach. I felt the cat’s presence. Anansi was nervous that morning as well. It was as if he knew the cat was near. He reared and struck at the trailer, screaming violently. At that moment I thought about turning back, but I reasoned that if Anansi and I got away from the farm all would be well, so I pushed on and loaded him.

As my parents drove me to the event, the feeling of dread nagged at me. I tried to tell them about the cat but they dismissed my fears as superstitious nonsense and competition nerves. “A possessed cat?” they scoffed, “Really!? It’s like the plot to some silly movie.”

But to me the cat was anything but silly. It was menacing. It was a thing of evil. But how to make anyone understand? I would end up sounding like a crazy person, rambling about pucas and malevolent spirits. So I tacked up Anansi, and I set out on course. The last thing I remember clearly were the unholy, gleaming yellow eyes of the cat peering out from underneath a particularly large brush fence.

From there the images come into my mind in bits and pieces. A pool of blood, the words echoing in my head that my beloved horse had not made it, the world spinning, the flickering fluorescent lights of a hospital room.

The fall happened many years ago. Too many for me to count as my brain was rattled, and the doctors say I am often confused these days. The days before the accident are crystal clear, but the years afterward are muddied. The trauma to my brain damaged my ability to speak, leaving my voice inept. When I have visitors, I sometimes manage to express a word or phrase. The word that most often passes the barrier of my teeth these days is “cat.” For he is now my constant companion. But now, rather than making me uneasy; when I look into the cat’s soft brown eyes, I am comforted.

Where once the cat was menacing and dangerous with glowing yellow eyes, now his eyes are the soft brown of my dear departed horse. Anansi’s soul lives on in the cat. I should have known it would have ended this way. Pucas are notorious shapeshifters. The god Anansi, a notorious trickster. And I am comforted by the presence of my cat and the padded walls of my cell.