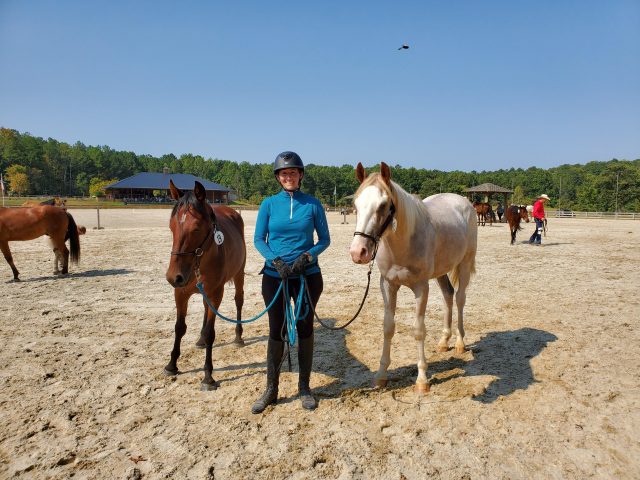 Lindsey made it to Georgia with her two Mustangs, Meraki and Kibou. However, the trip was not without its challenges. 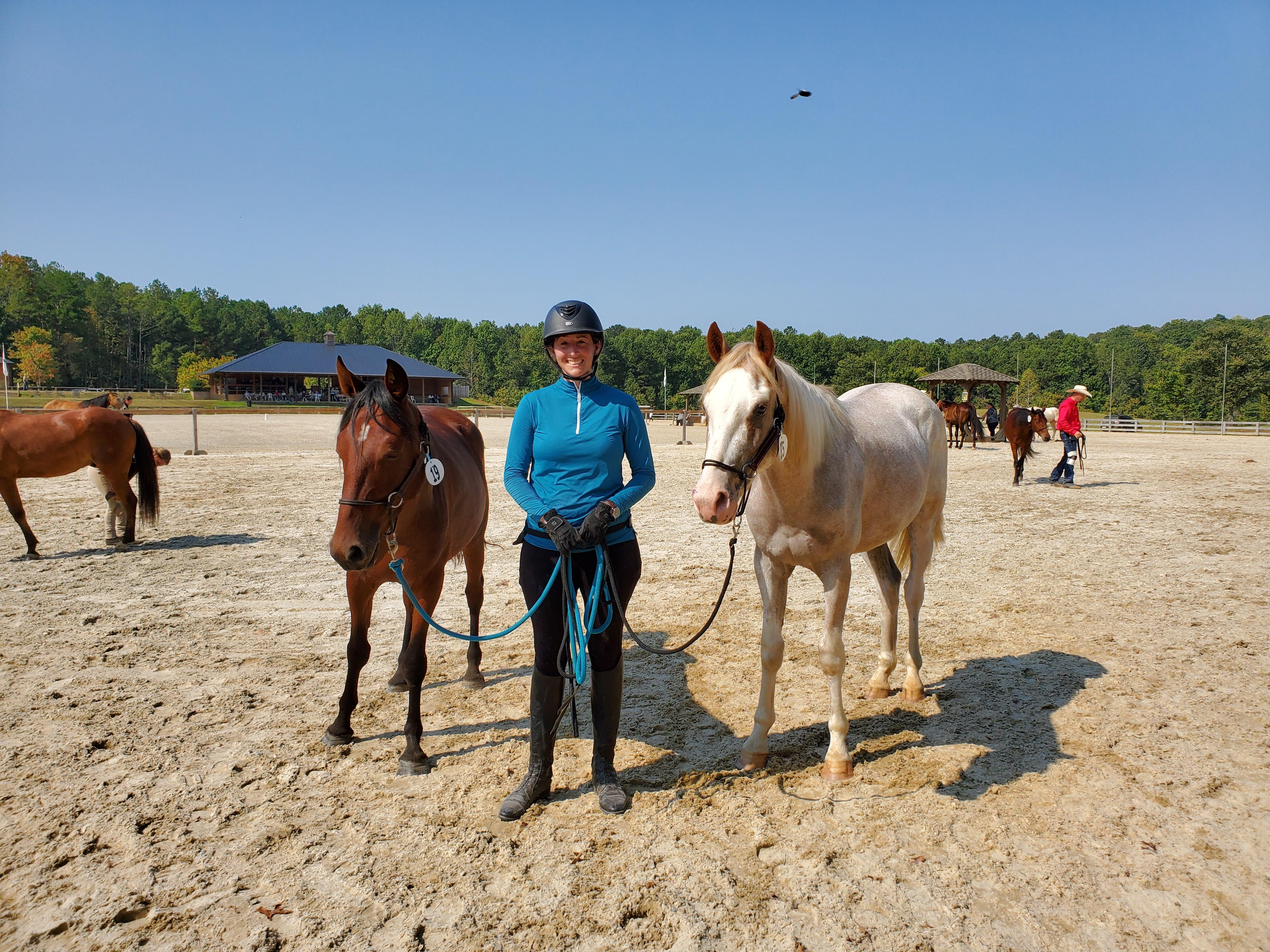 It was finally here — the Georgia Mustang makeover. After getting my Mustangs while I was literally in labor, it was hard to imagine what life would look about three months later when we went down to Georgia for the competition.

My Mustangs arrived very skittish — one so flighty that if you looked in the paddock I thought he would try to jump out — and the other super underweight. I was already cut short of training time because we had paperwork issues of getting the horses into Canada and then I spent a week in the hospital after giving birth to my little baby Evelyn, which cut down my training time even further.

When I started training, both of my horses were in the same paddock and Kibou was the easier to train, so I wasn’t able to start Meraki until I had Kibou halter trained and moved into a field. This was imperative because I didn’t want to tell Kibou to leave me alone (because in the beginning the relationship is fragile and didn’t want to give mixed messages of telling him not come over), so because Kibou would approach me in the field, I couldn’t focus on Meraki.

I didn’t actually get started with Meraki until mid-July, which means an entire third of the competition he wasn’t handled at all. I even contemplated not taking Meraki to the competition because he was so spooky and skittish I wasn’t sure if I would get him trained in time.

Instead of fretting about not being ready, I just put aside the time that I could and worked with my horses whenever I had the opportunity. Sometimes that meant I could get to them a few days a week, and other times less or more. Because I usually don’t get a ton of time to work my horses or I would be watching the baby while training the horses, I usually picked one goal to focus on and tried to get that task a little bit better. 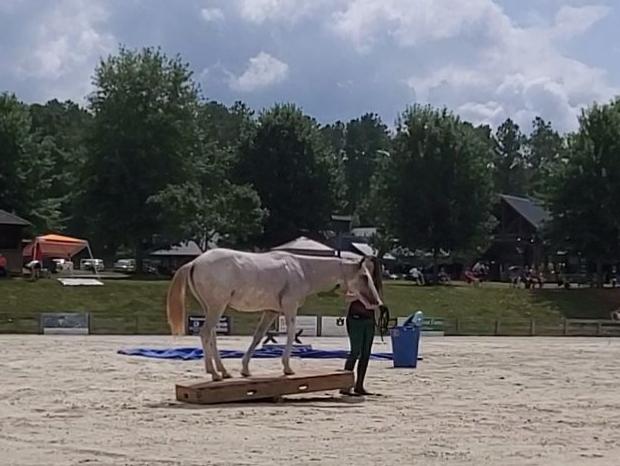 For example I might have the goal to getting a horse to pic up its feet better, so I start by focusing on other things and then make sure my picking up of the hooves got better before we finished the session. That way, even though I was not able to tackle multiple tasks within a session, I was at least making progress.

Somehow the time passed and I made enough progress with Meraki that we were driving down to the Georgia Mustang makeover. When we got there we were delighted by the beautiful show grounds.

It was definitely a challenging competition, especially with the Mustangs and a newborn baby. Even though I had some helpers, I also had two other competitor friends that I went down with who also needed help.

I learned that doing two freestyles with a variety of props is challenging to organize. I don’t think I’m planning to do that again! It was a lot of fun, but I would change a few things to make it easier during the day.

My boys ended up doing really well. Meraki won his handling class and finished seventh overall. Kibou finished 11th overall and he competed in the open freestyle class which was open to Mustangs that had been adopted at any time. That means we were against some pretty tough competition with people that have had their Mustangs for a long time. We still managed to pull off a sixth place, which I was extremely proud of.

The real excitement happened on the way home. We made it a few hours to Tennessee and experienced a death wobble in the truck. It was super scary but we were okay and made it to an auto shop. I made a post to Facebook and a bunch of people stepped in to help find us a place to stay.

We were really lucky that somebody was able to drive over with their truck and hitch to my trailer to bring me to their place so the horses could be turned out — and they had a sofa for me to sleep on.

The auto shop was able to figure out the problem… $3,500 of repairs and a day later, I was back on the road, but by myself with the baby and my two mustangs because the rest of the group had to get back.

When I got my truck back I had to go early in the morning and made it a few minutes before the truck started doing weird things. For instance, the radio going on and off. I contacted some mechanically inclined friends who said it seemed like the alternator, so that I could keep driving but to make sure I didn’t shut it off.

I thought, “That’s okay. I have a friend in Kentucky I planned to stop at anyway and I can unhitch and take it to a shop again.”

Three hours to Kentucky and then the lights on the dash started going on and off, but I made it to my friend’s place. As I pulled in the driveway, Evelyn started screaming because she was hungry, but I couldn’t turn off the truck, so I quickly unloaded the horses and unhitched the trailer.

Literally as the trailer lifted off of the truck, I saw white smoke come out of the exhaust and the truck shut off.

So I called a tow truck and had the truck sent to another auto shop, this time it would be about $2,000 worth of repairs to get it going again. How many hours will I make it this time?

I made the decision to abandon the truck in Kentucky and try to find a different way home. I was open to any options including selling my trailer, getting my Thoroughbreds shipped down to Kentucky to meet me there (because the Thoroughbred makeover in Kentucky was just two weeks away) or finding somebody to come down to get me.

Luckily somebody was able to come down from Ontario to Kentucky, hitch to my trailer and tow my horses back to Ontario for a reasonable price and on such short notice. I had actually signed up for a clinic with Josh Rushing and an obstacle show that I was supposed to take my Thoroughbreds to for a last practice before the Makeover.

It turns out that it was closer for Ben (who came to get me) to take me to the clinic location than to take me home. That meant I was able to ride Kibou at the clinic and to compete in the show with Kibou. I had completely given up on making it to the clinic when all the truck craziness happened, so I was thrilled to participate.

After the clinic a friend was able to tow my trailer the rest of the way home after the weekend was over.

Next I had to figure out getting down to the Thoroughbred Makeover. I made a post on Facebook on the Makeover Trainers page and I was able to connect with another person that had a truck but no trailer so she was looking for a ride for her horse down to Kentucky. We were able to help each other out by using my trailer with her truck.

You can bet that the whole experience was pretty grueling and lots of challenges came my way. At times I definitely cried and couldn’t wait to just get home.

I often say I am the luckiest unlucky person. But at the same time I think in bad situations I make decisions that allow some good luck to find me. 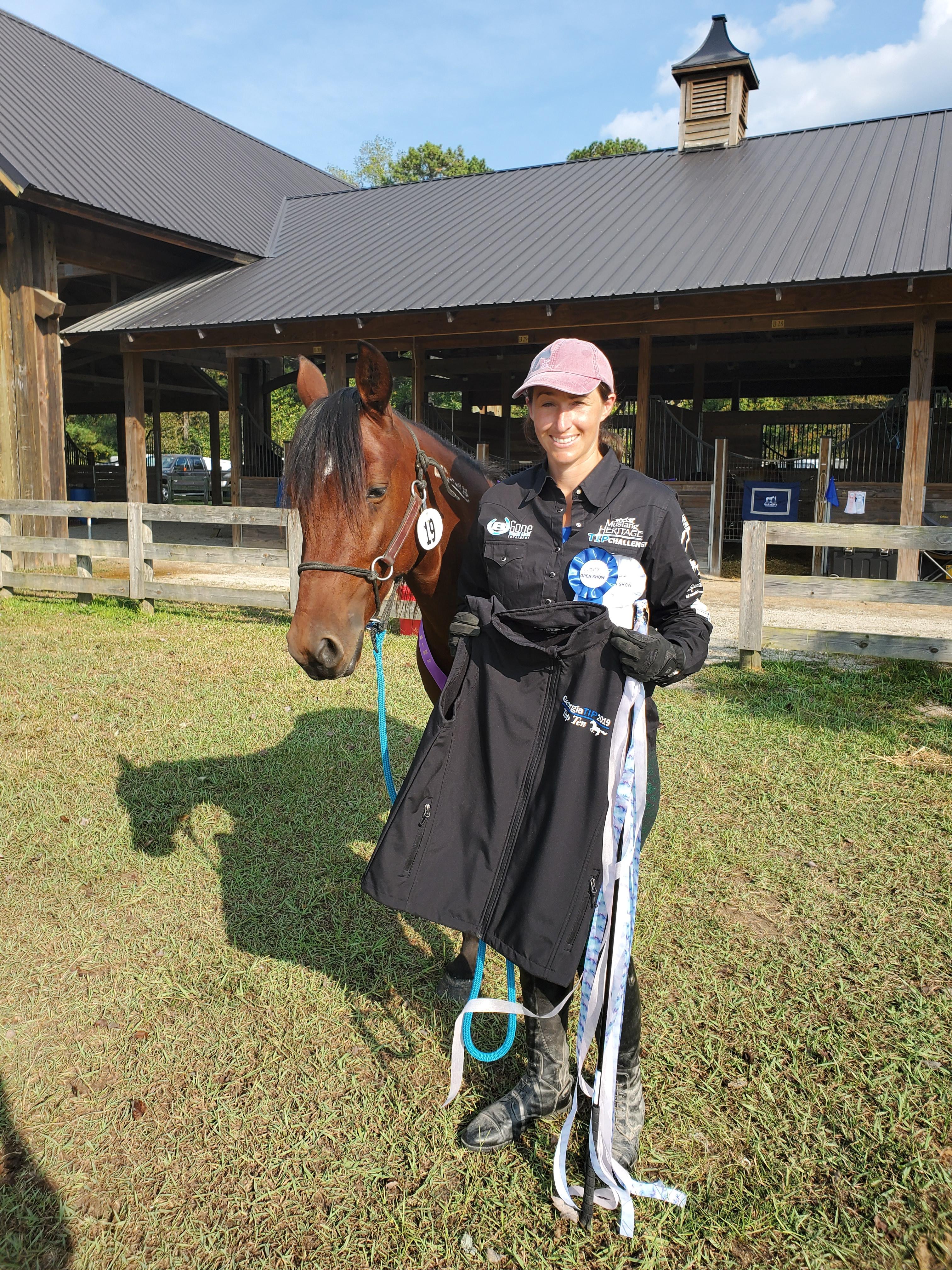 I could have given up on getting to the Thoroughbred makeover, getting to the clinic, and I could have wallowed in sorrows for a week. I don’t have everything figured out yet as I still don’t have a truck. It’s not as simple as simply going out to buy one, as I would have to figure out payments and things like that.

When I talk to different people, it seems like we all have challenges and struggles, just different types. Half the battle is our mindset and coming up with solutions and options to our issues.

This month’s message is one of reflection about your own goals and the barriers or challenges for you achieving them. What is standing in your way from what you want? What is stressing you? And what are your options?

Not just the easy options, but what are the options where you might need to reach out and ask for help, what communities do you have available to you to ask for help? What can you exchange or trade that might make it easier to get what you want?

When you are stuck in a crummy situation remember to:

Let’s hope the Thoroughbred Makeover will be less eventful!