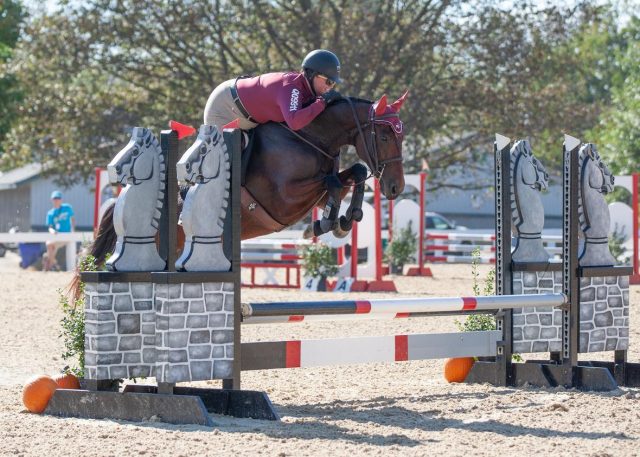 Preliminary competition is now complete in all ten disciplines at the Thoroughbred Makeover and National Symposium, presented by Thoroughbred Charities of America. See who is sitting in the top spot in each discipline. 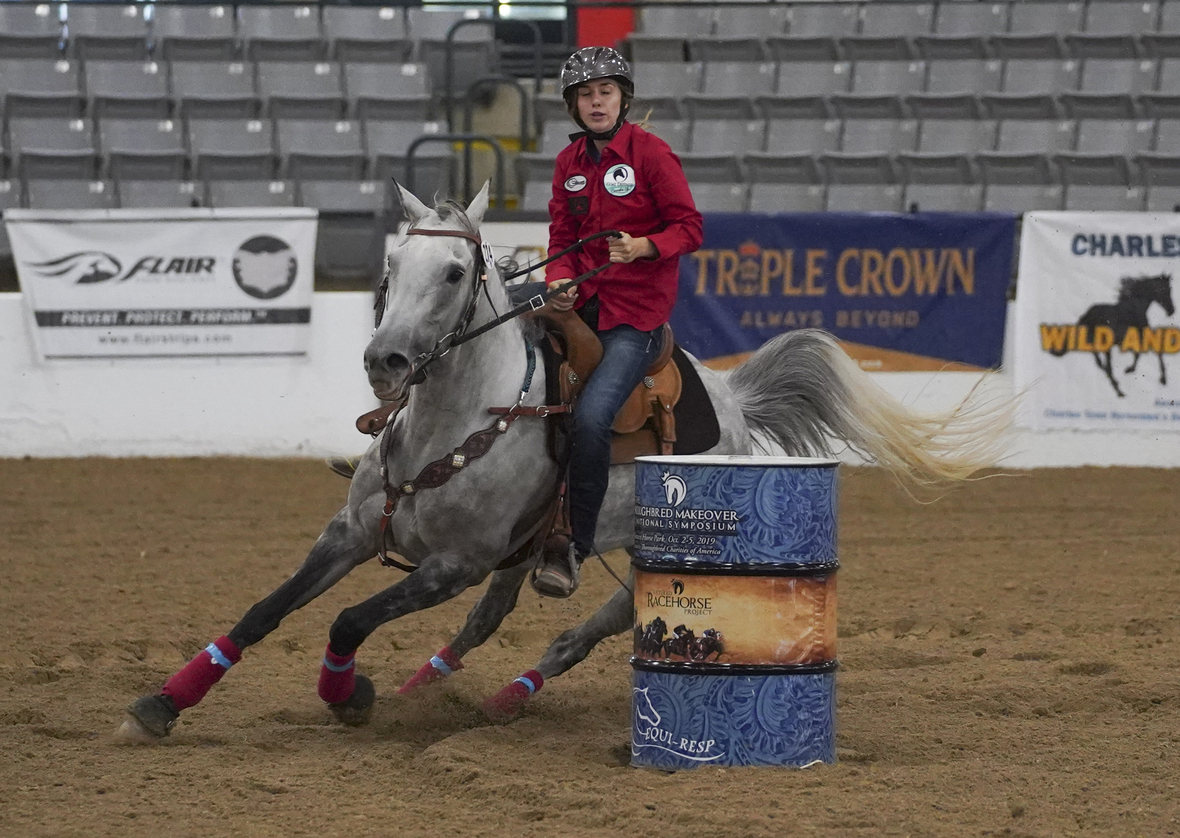 While Fallon Taylor and Cowboy Swagger still hold in the overall lead in the Barrel Racing after this morning’s second run — overall scores include two barrel runs plus the horsemanship test that assesses foundation of training — the fastest barrel time in preliminary competition was set by junior trainer Shaila VanSickle and Market Risk.

VanSickle hails from McHenry, Maryland and has a Top 5 placing at All-American Quarter Horse Congress on her resume. Her horse Market Risk is a 2012 mare by Alphabet Soup out of the Formal Gold mare Risky Kitten; she was bred in New York by McMahon of Saratoga Thoroughbreds. Market Risk is a “warhorse” having made 67 lifetime starts, winning three races and earning a total of $39,724. As of her last start at Mountaineer, Market Risk was owned by East Dailey Racing Stable and trained by Kevin L. Fields. 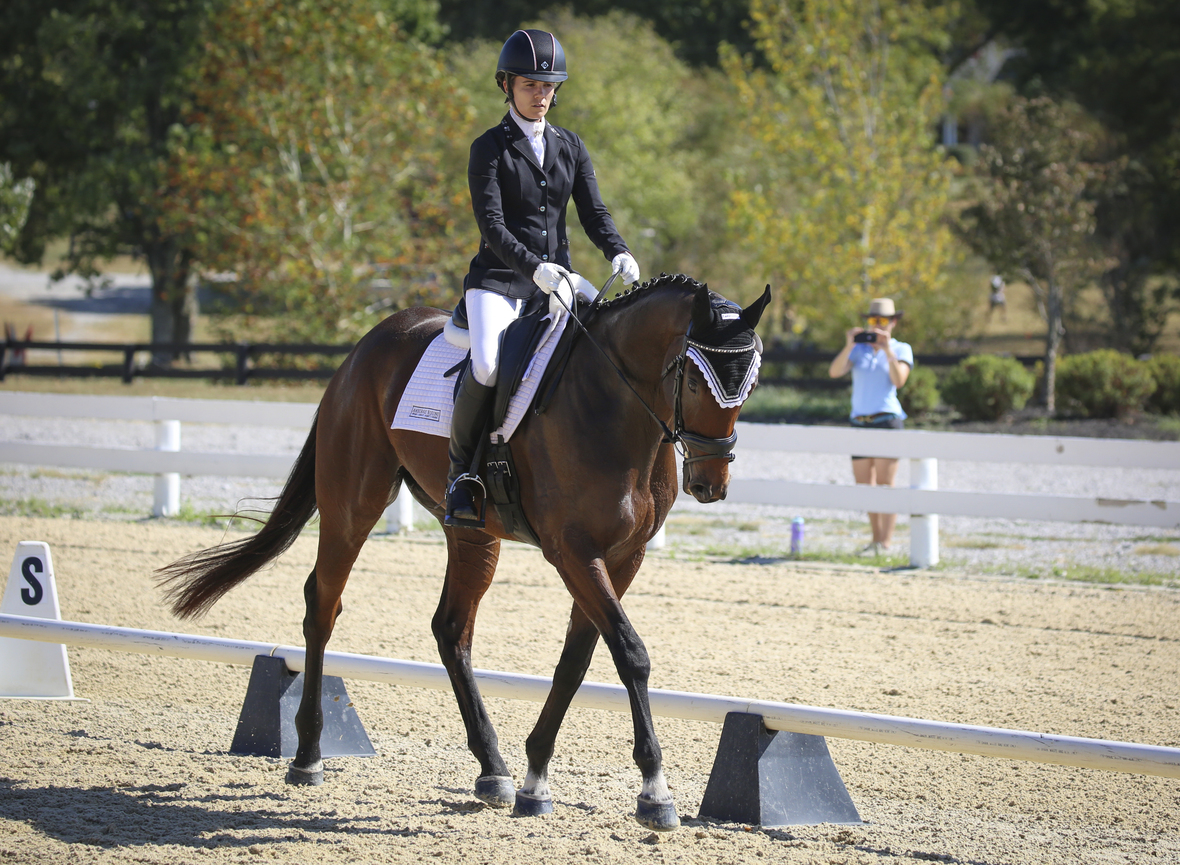 Today’s Dressage competition shook up the leaderboard, with Alison O’Dwyer and Fifth Ace taking over the lead. O’Dwyer is a professional from Laurel, Maryland, describing herself as “an eventer who loves dressage.” She’s no stranger to the Makeover stage, having finished as reserve champion in eventing in both 2017 and 2018.

“In the arena, I was smiling ear-to-ear with every movement,” she described. “It was a great feeling to come out of the Rolex Arena knowing that we could not possibly have done better than we had. We did our very best.” O’Dwyer intends to develop Fifth Ace as a personal horse; the 2015 gelding is by Bernardini out of the Giant’s Causeway mare Model. He was bred in Kentucky by Abergwaun Farm, and made three career starts with $1,365 in earnings. As of his last start at Arlington, Fifth Ace was owned by Neil Jones and trained by Andrew McKeever. 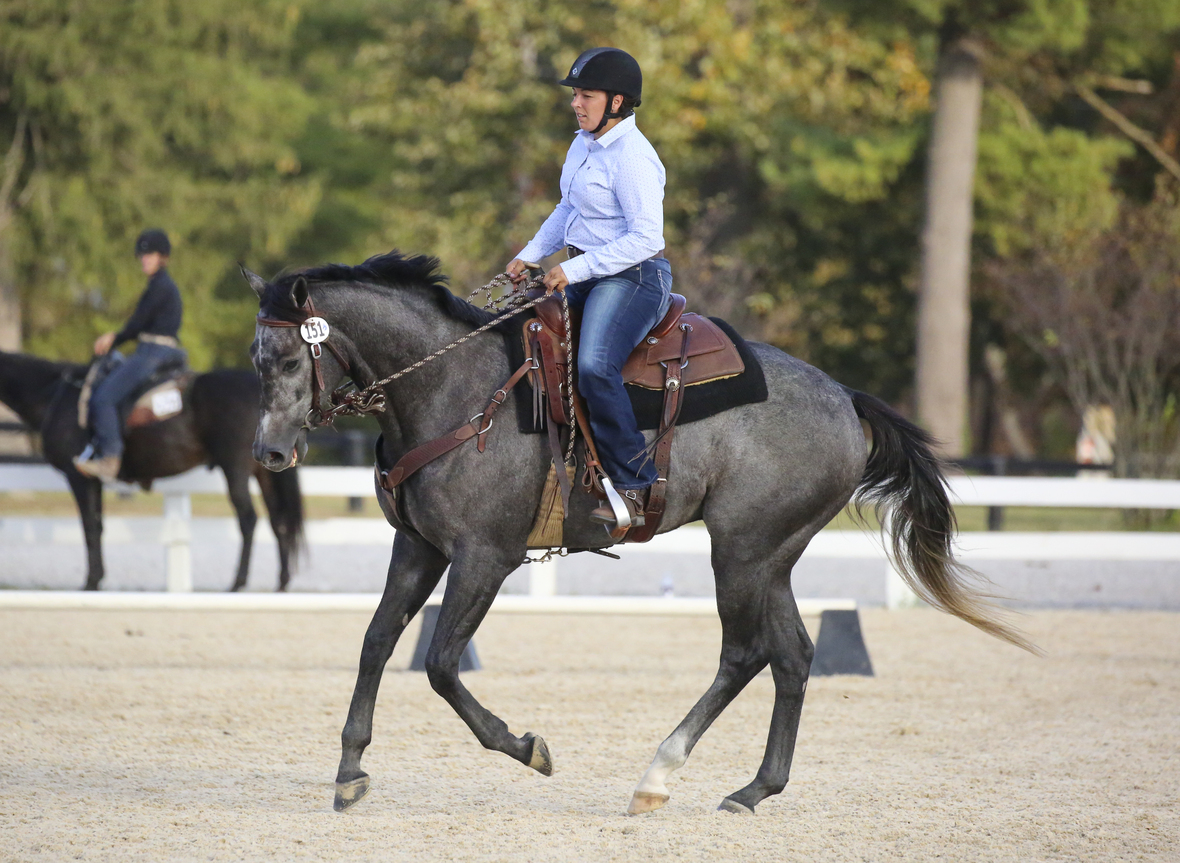 Debuting for the first time at the 2019 Thoroughbred Makeover is the emerging discipline of western dressage. At the Makeover, western dressage is offered as an option within the discipline and English and western riders compete side-by-side. After preliminary competition, Lauren Burke and Frank’s Gift are the highest-placed western combination, standing in fourth going into Saturday’s Finale.

“I got into western dressage thanks to the Makeover,” Burke, of Versailles, Kentucky, described. “We don’t always have a lot of ranch shows locally, so when I was preparing my 2018 horse Street Jersey for the Ranch Work, I often attended local dressage shows that offered western competition. This year, I’m preparing a younger horse, so I didn’t want to put him through two jumping divisions — it seemed like a natural fit to try western dressage when I saw that it was added to the roster.”

Burke, a professional trainer with plenty of Makeover experience, has finished in the top ten in both 2017 and 2018 in a variety of classes. She’s preparing Frank’s Gift not only for the Finale in Dressage, but also in Field Hunter. Frank’s Gift is a 2016 gelding by Temple City out of the Master Command mare Miss Pippa. He was bred in Kentucky by Spendthrift Farm, but never made a start. 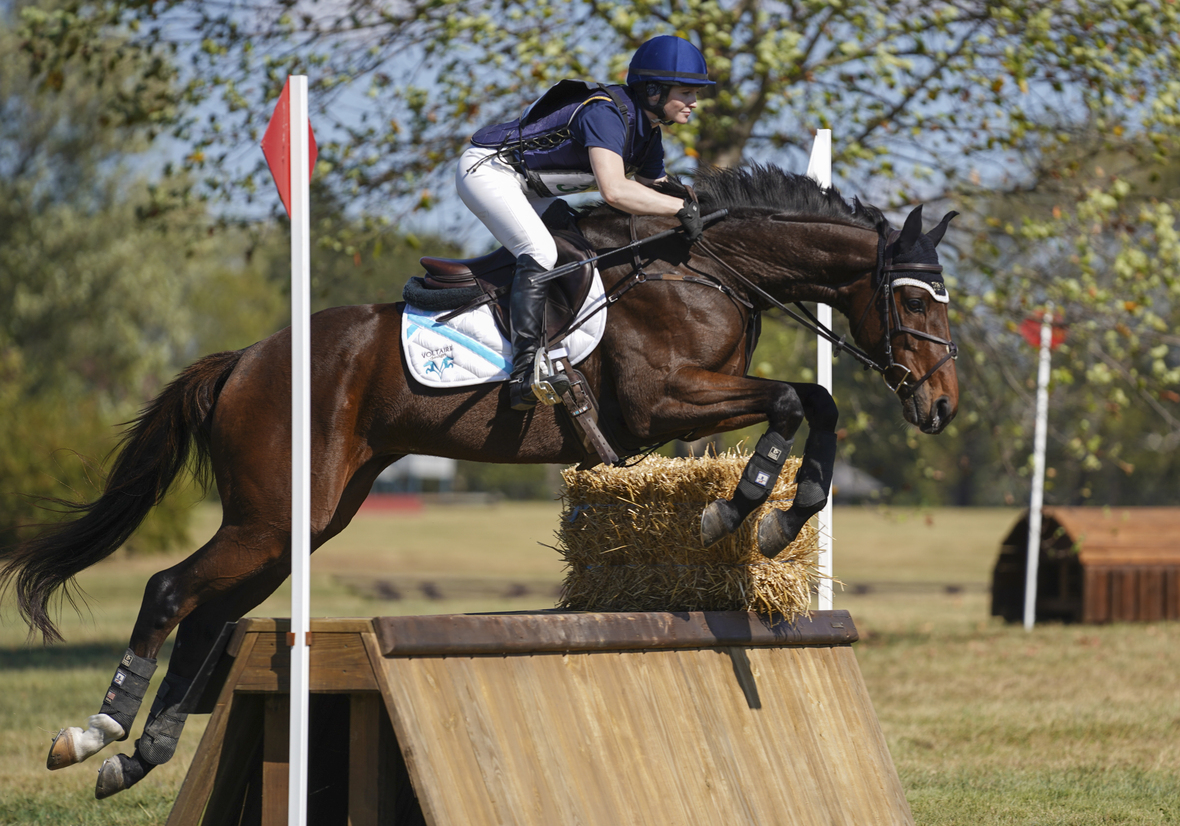 Rosie Napravnik and Sanimo have taken over the lead in Eventing (Napravnik also will finish seventh with Bethel Wildcat). 2019 marks Napravnik’s fourth Makeover, after she transitioned careers from professional jockey to professional trainer of off-track Thoroughbreds. She is from Simpsonville, Kentucky.

“This horse peaked today,” Napravnik described. “He had by far his best dressage, his show jumping was very good, and by the time we got to cross-country I was just so excited to ride! Cross-country is his best phase.”

Sanimo is a 2015 Kentucky-bred gelding by Smart Strike out of the Galileo mare Sanima. He was bred by Dell Ridge Farm and consigned to the September sale at Keeneland as a yearling, but did not sell. Dell Ridge Farm raced the horse, trained by Geoff Mulcahy, for four starts and earnings of $1,861. Sanimo is currently offered for sale via the ASPCA Makeover Marketplace. 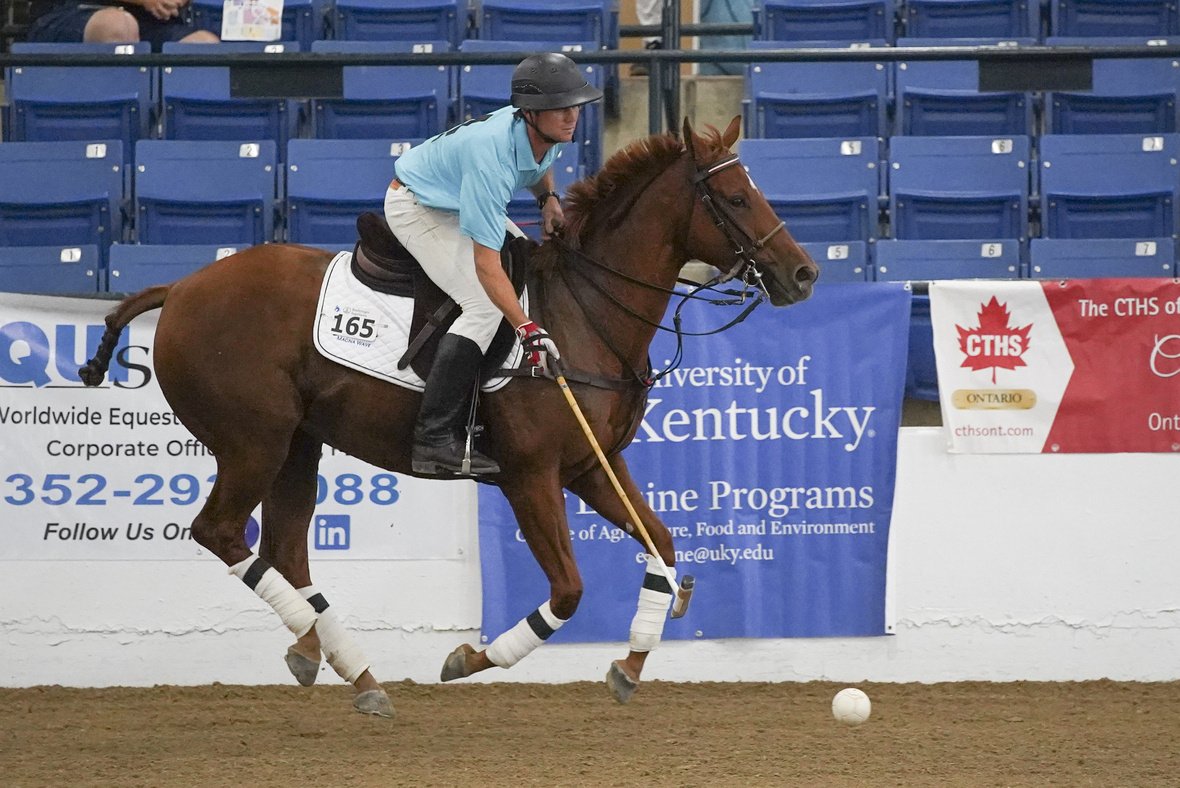 Buck Schott is another trainer who is no stranger to the Thoroughbred Makeover nor the off-track Thoroughbred: he won the Polo discipline in 2016 and placed second in 2017, and he and his father Trey start several off-track prospects annually for their polo program. He’s currently sitting in the lead in Polo with Great Reward, a 2015 mare by Candy Ride out of the Include mare Daring Reality.

“She’s been great to work with,” Schott, of Versailles, Kentucky, described. “She had a little bit of aggressive behavior at first, but now she fits into our program one hundred percent and she’s getting pretty friendly. She’s going to be a successful polo horse — she’s the ideal body type and she looks the part. She’s also very sensitive, athletic and responsive, and she’s a quick learner.”

Great Reward was bred in Kentucky by Dell Ridge Farm and sold for $110,000 as a yearling at the Keeneland September sale. On the track for owner Joseph V. Shields, Jr., she made two starts and earned $730, trained by James A. Jerkens. 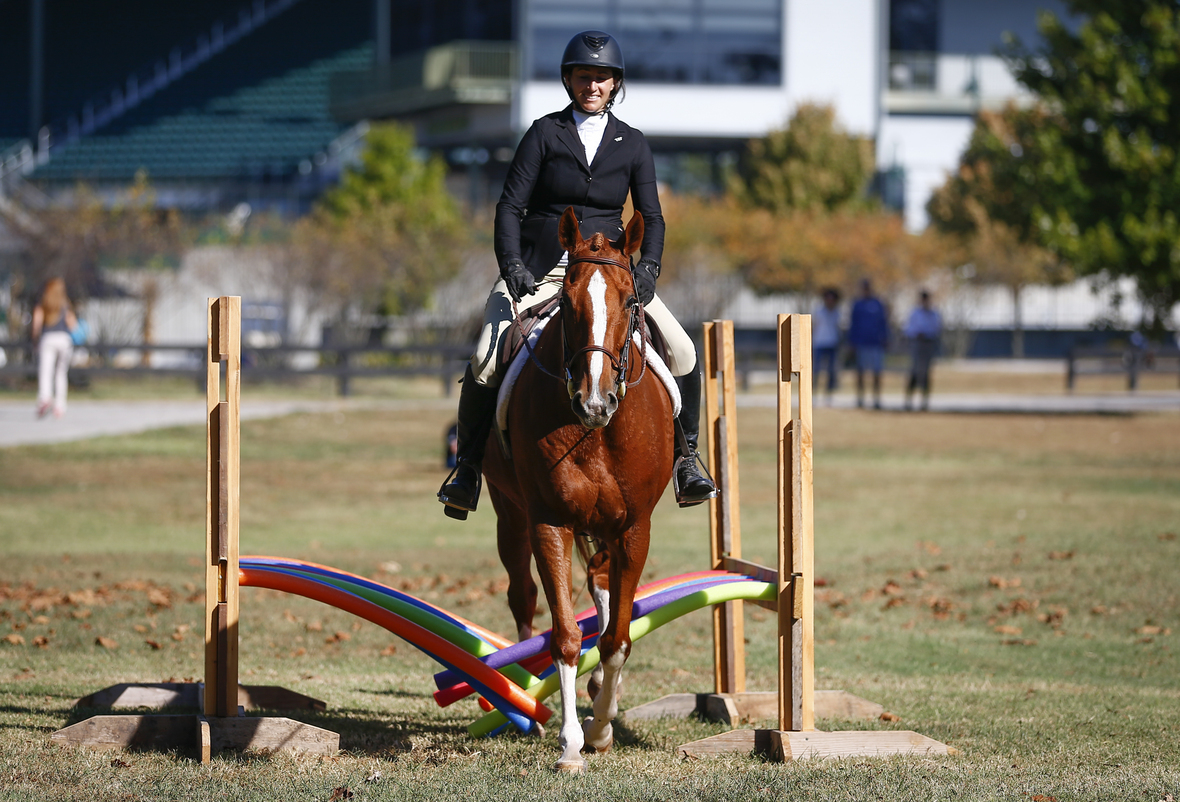 Sitting in the lead in two Makeover divisions at the same time is not a new experience for Lindsey Partridge of Pontypool, Ontario. The professional horsewoman made a splash in her first Makeover in 2015 winning Thoroughbred Makeover Champion, and has consistently placed in the top ten in every discipline she’s entered since — other than in 2018, when she served as a judge in the Freestyle. She’s leading once again with two different horses: Regina Christina in Competitive Trail and Fairly Obvious in Ranch Work.

“Honestly, I was nervous coming into this year’s Makeover,” Partridge stated. “I haven’t had nearly the miles on my horses this year that I normally do: I had a difficult pregnancy and had my daughter in June, so I didn’t start really riding these horses seriously until later in the summer. People now expect pretty big things from me at the Makeover, so the pressure was on!”

But Partridge’s foundational work saw her through with both horses in both disciplines: Regina Christina tackled some new obstacles with ease in the Competitive Trail, and Fairly Obvious handled the ranch patterns smoothly and confidently — despite having only been able to participate in two off-property experiences with cattle before the Makeover. 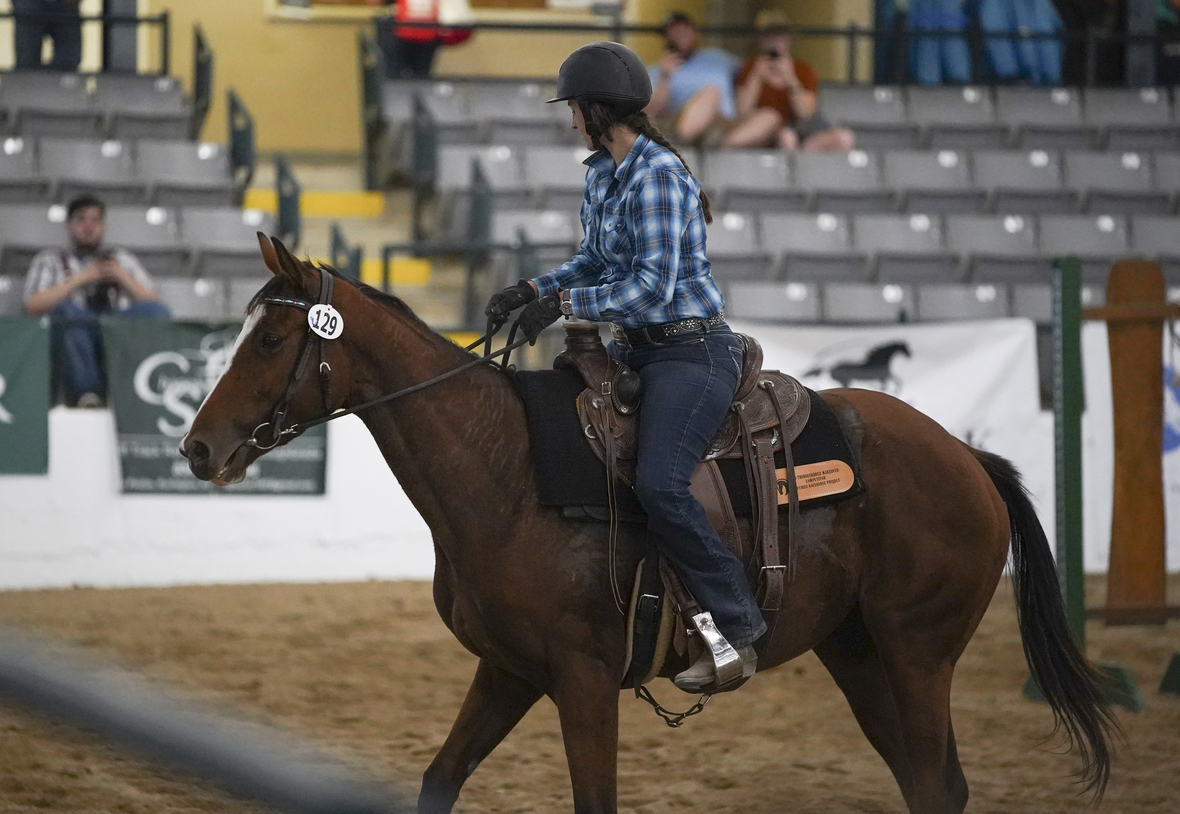 Regina Christina is a 2012 New York-bred mare by Stonesider out of the Kelly Kip mare Great Lady K. She was bred by Hardwicke Stable and raced for owner Paul H. Ubbink under trainer Karl M. Grusmark, making 35 starts with six wins and earning $148,384. Her last starts were at Finger Lakes. Regina Christina is listed for sale via the ASPCA Makeover Marketplace.

Fairly Obvious is an unraced 2016 mare by Weigelia out of the Kris S. mare Their Fair Share. She was bred in Pennsylvania by Ghost Ridge Farm and never raced. Partridge intends to train Fairly Obvious in jumping when the mare is a little older. 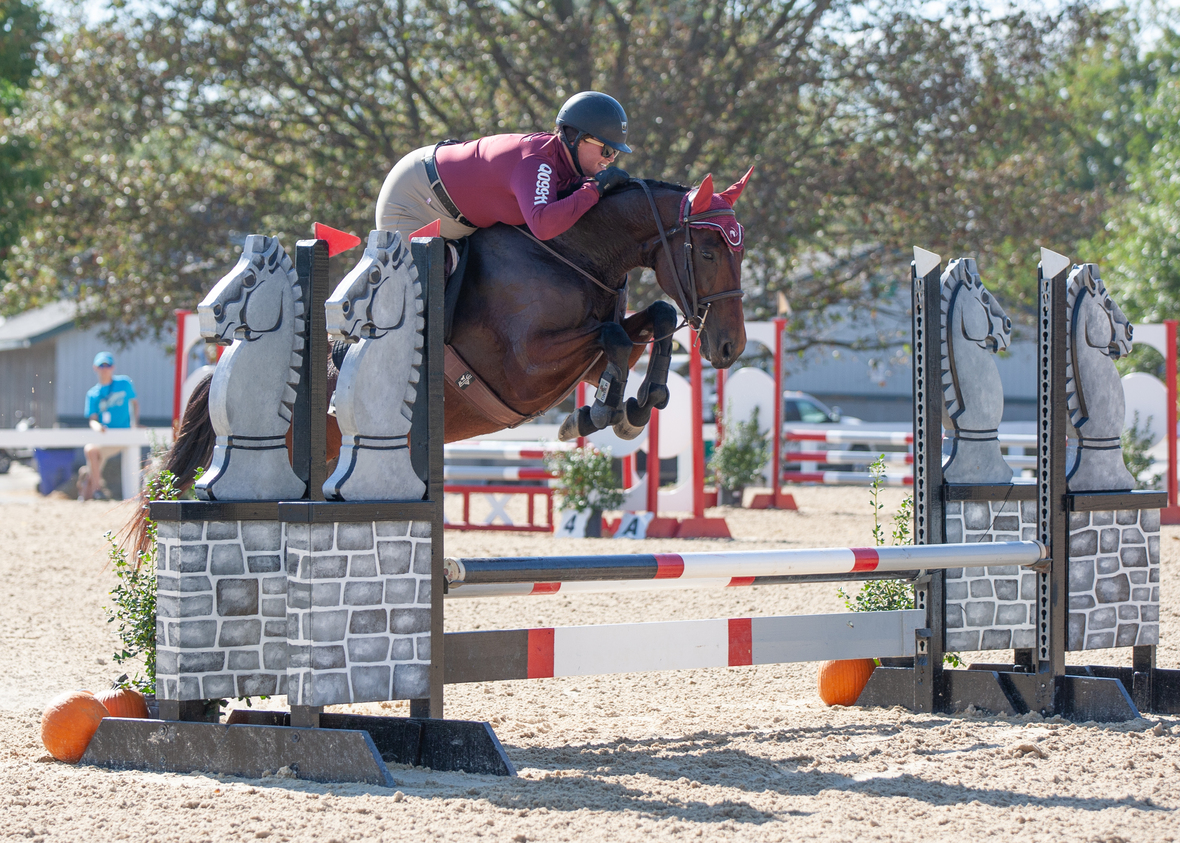 Taking control of the lead in Show Jumper are Katherine Deichmann and Tenpin Sugar. Deichmann hails from Wimberley, Texas and is a professional trainer with experience in both show hunter and show jumper. This is her first Thoroughbred Makeover.

“My grandfather raced this mare,” Deichmann shared. “We thought she’d be a good candidate for this event, so we brought her home and one of my students fell in love, so she has a forever home! She was perfect today — she also did Show Hunter yesterday and felt great, and will be coming back for the Finale there as well. After the first two fences today in Show Jumper, I knew she was on her game.”

Bred by Emile J. Barras Farm Stables in Louisiana, Tenpin Sugar is by Tenpins out of the Storm Cat mare Hurricane Amy. She sold as a yearling in the Equine Sales of Louisiana Yearling Sale in 2014 for $1,900. Owned and trained by Edelmiro Carrizales, Tenpin Sugar made 19 career starts and won once, earning a total of $7,586. 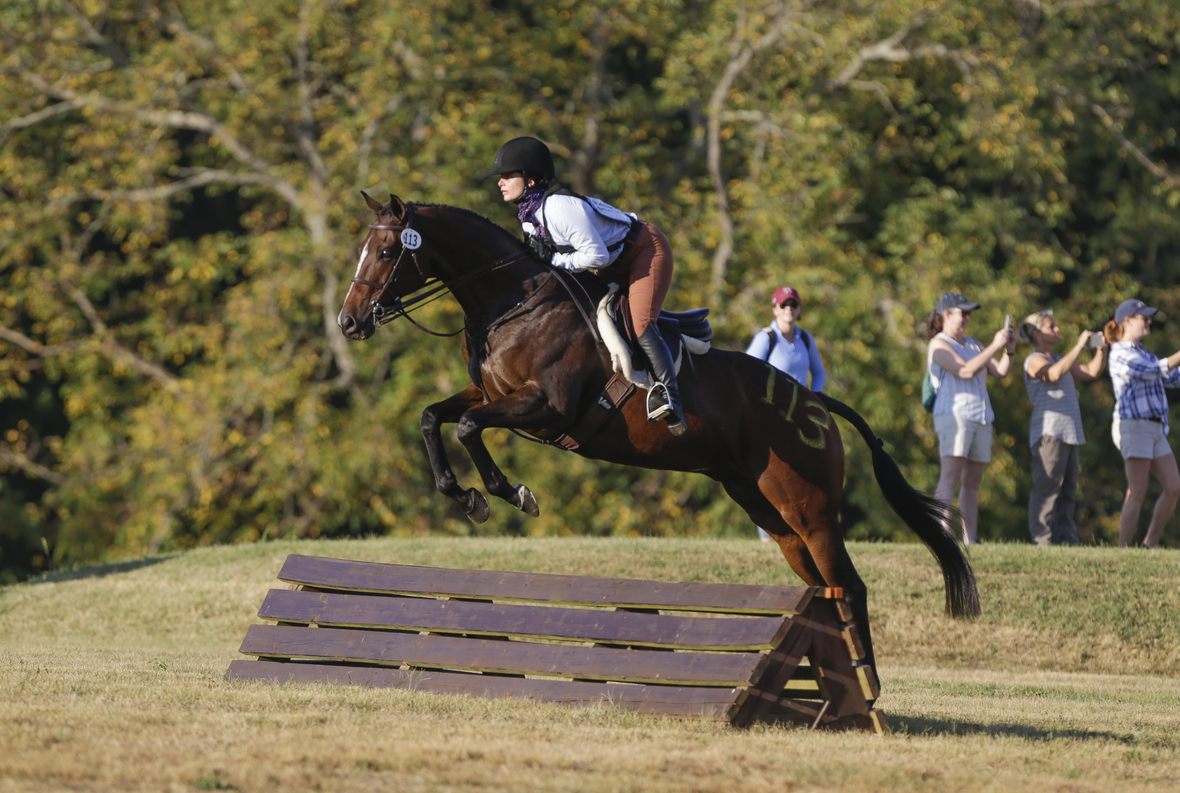 Yesterday’s leaders in Show Hunter and Field Hunter remain the same after today’s competition. The five top-placed riders in all ten disciplines will return for the Finale on Saturday, where one more round of competition will determine final placings. The winners of all ten disciplines will then be in the running for Thoroughbred Makeover Champion, determined by audience vote.

On Friday, education takes over at the Thoroughbred Makeover and National Symposium. The TERF Master Class takes place from 9 AM until noon, and a seminar series presented by Horse Media Group takes place all afternoon.