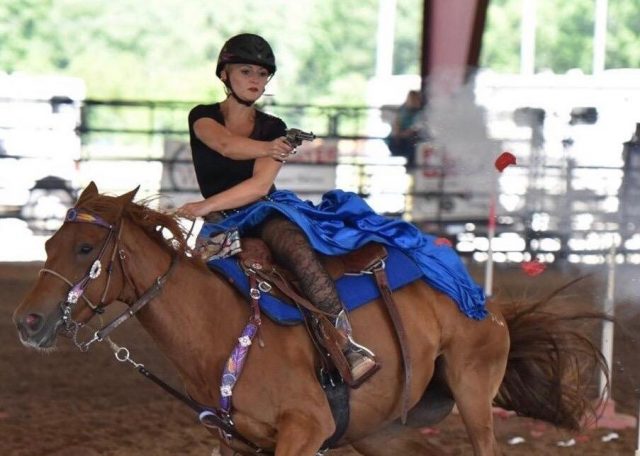 This weekend marks International Helmet Awareness Day. As a way to help raise awareness, we here’s the story of Jennifer Treas, whose helmet likely saved her life. 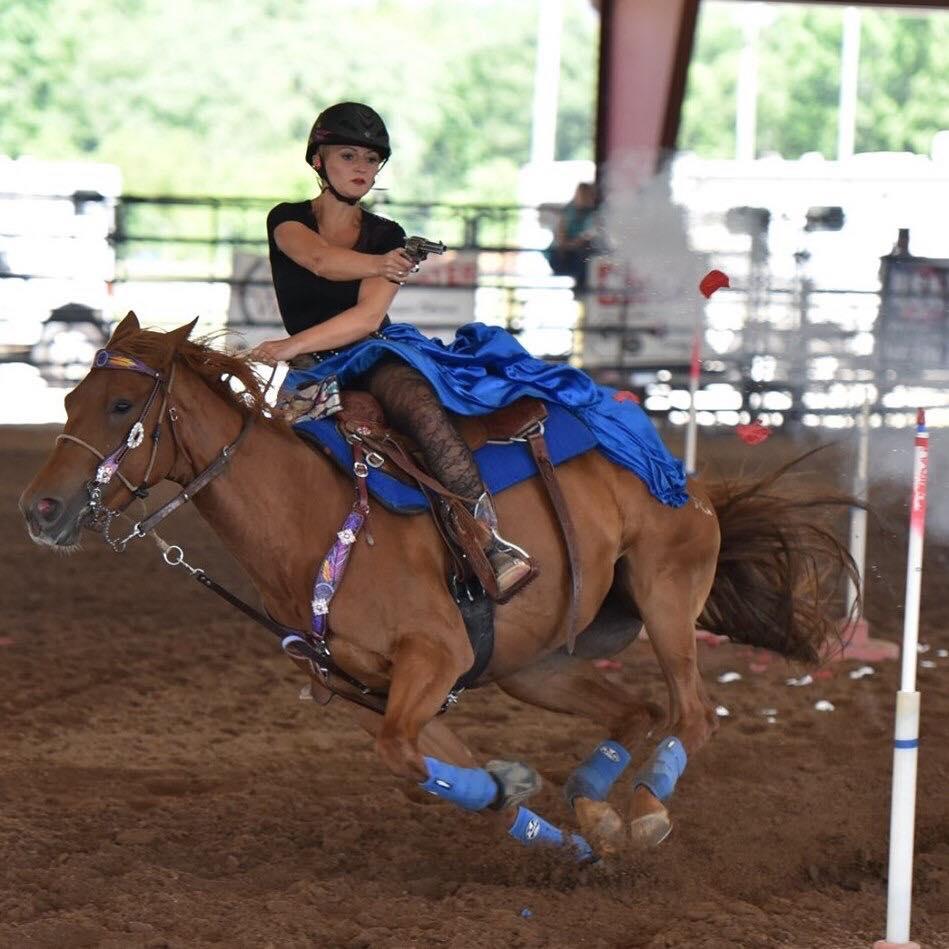 I’ve always avoided the helmet debate. As an avid skier and horsewoman, I’ve spent my fair share of time in the vortex. You know, the black hole better known as internet discussion forums. If you choose to delve into the vortex, you’ll find numerous heated debates surrounding the use of helmets. I’ve steered clear of these. First, I don’t want to get into a circular argument in which no one is going to change anyone else’s opinion. Second, who am I to tell you what to do? I don’t feel it’s my place, so I’ve stayed away.

As for my own helmet use, I’ve always been a bit of a paradox. In skiing, I wear a helmet. No questions asked. As an instructor I had to and as a skier who spends much of her time on the East-ish Coast, ice is hard. Thus, I wear a helmet.

Riding horses, I’ve never worn a helmet. I can’t even tell you why. Maybe it’s because I ride western and it’s not what we “do.” I make my kids wear helmets and I’ve had it in the back of my mind that I “should.” Yes, because it’s the safe thing to do, but mainly because I want to set a good example for my kids . . . and avoid having them say, “But you don’t wear a helmet” when the inevitable pushback about wearing one arises. However, I have been dragging my feet. I haven’t made getting myself a helmet a priority.

This summer, that changed. The misfortune of someone I know served as a wake-up call.

In honor of International Helmet Awareness Day (which is today, September 14th), I want to share my wake-up call with you by relating the story of the amazing woman with whom I get to compete — Jennifer Treas.

I know Jen through Cowboy Mounted Shooting. Now, when I say I know her, let me be clear. I am just starting out in the sport and she is an accomplished rider. So, more accurately, I know who she his, have watched her runs in awe and being the wonderful person she is, Jen is always friendly, warm and welcoming.

On top of this, she and her family compete together. Paul, her husband, is a Men’s Level 6 and their two daughters — Georgia, 6, and Lily, 5 — ride in the Wrangler classes. Each of them is a great rider in his or her own right, and they always look good doing it. 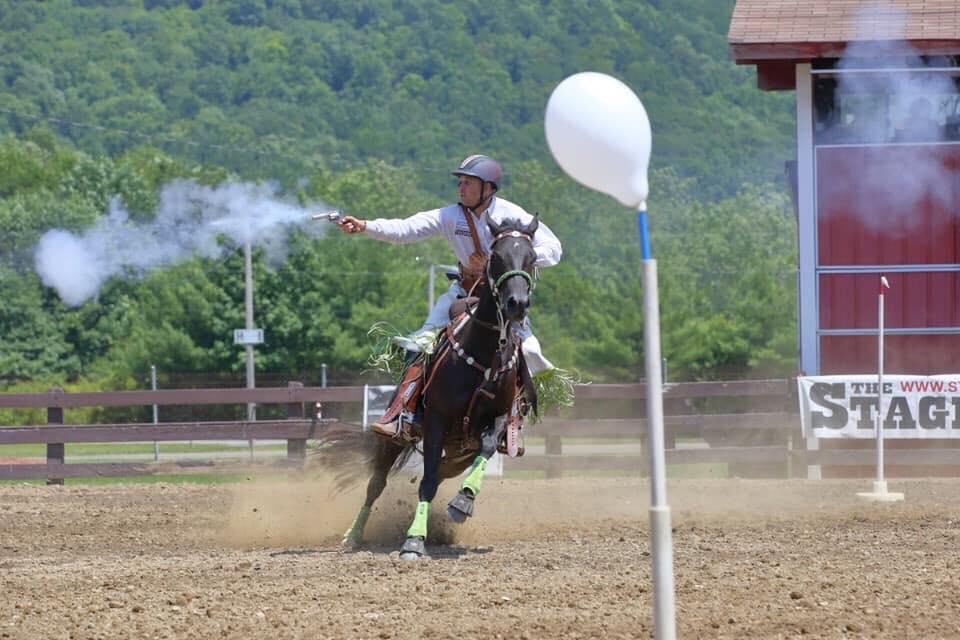 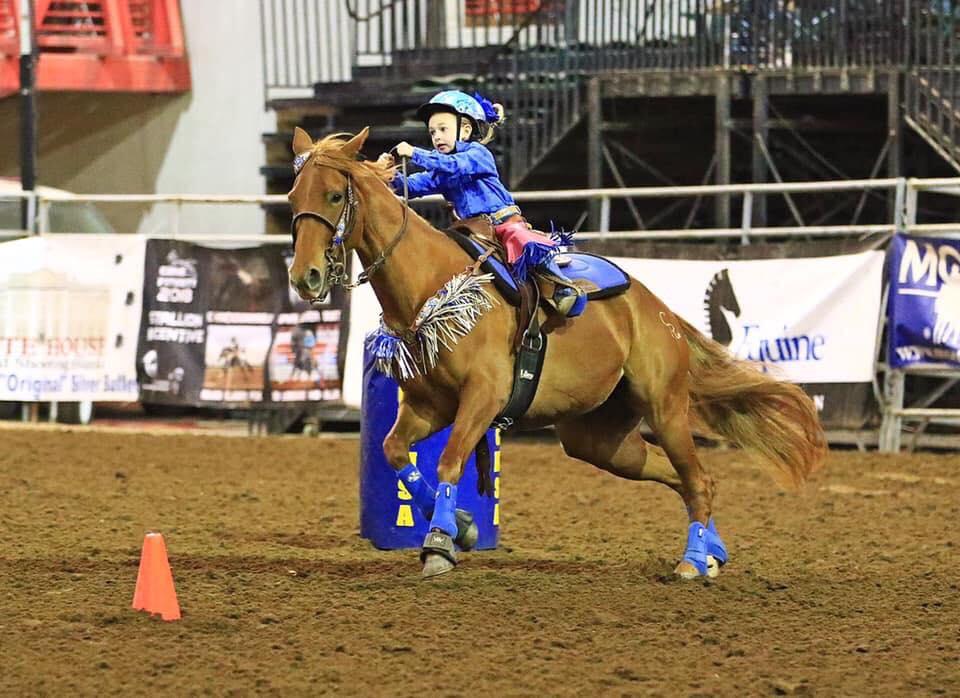 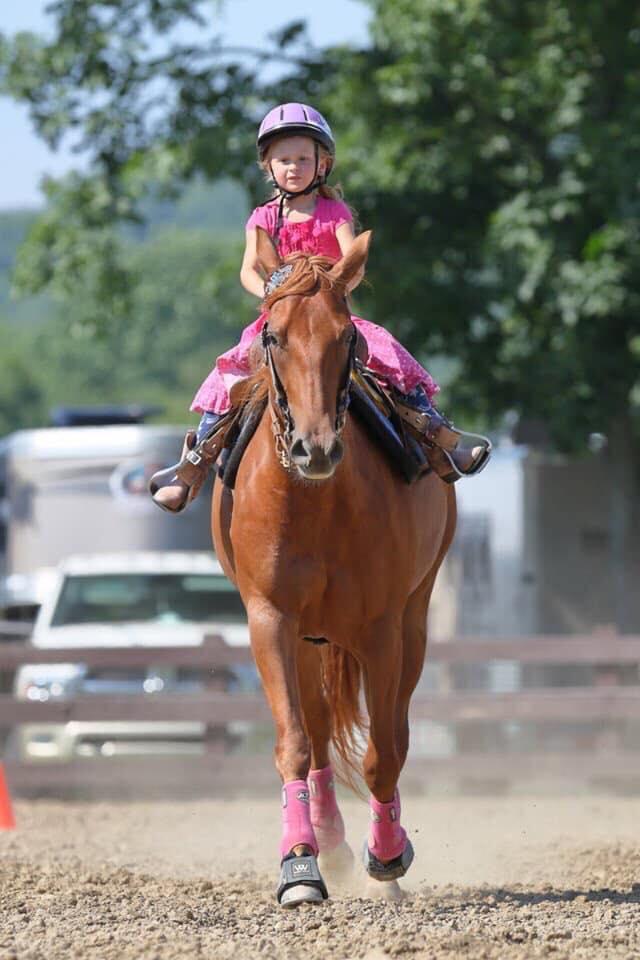 We’ve all been to our share of shows where we see riders who are accidents waiting to happen. During their rounds, we watch with stomachs clenched waiting for disaster. Jen is not one of those riders. Quite the opposite.

As a Ladies Level 4 (out of six) shooter, Jen has proven that she has the skillset to navigate a course at speed. But she’s also an excellent rider. Her equitation is nearly always perfect and her runs are fluid and correct. The amount of time and hard work she dedicates to her sport is evident in how she rides. She and her horse, Ruby Red Starlight (aka Posh), are an amazing team and watching them run a course is like poetry. 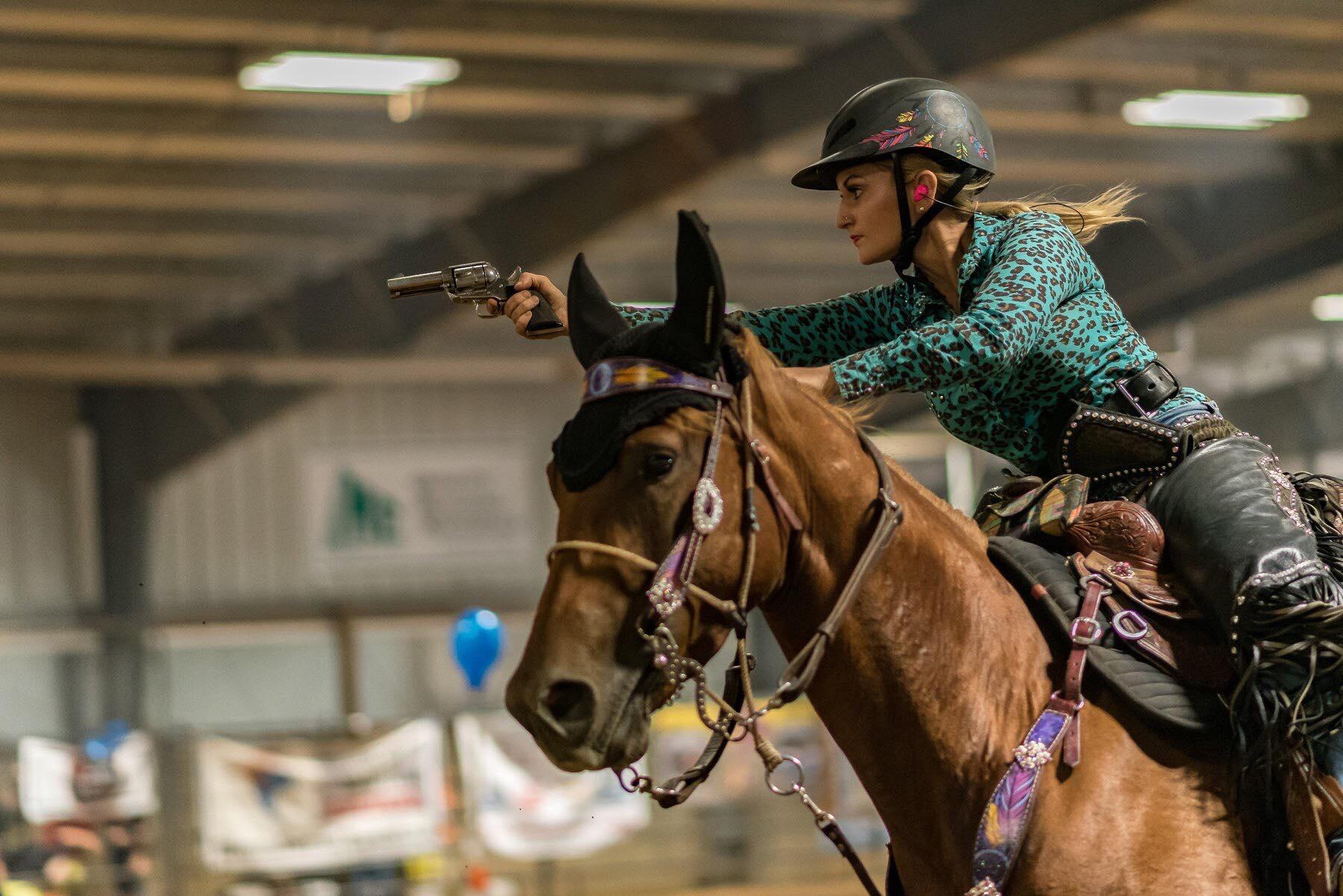 So when Jen had a serious crash earlier this season, everyone in our community of riders was shocked and shaken up. Between Jen’s own riding ability and the family atmosphere she, her husband her children bring to the events, her accident was particular jarring. And it was exactly that — an accident. There was no rider error, the footing was good — it was just one of those things that happens.

The accident itself happened at the end of a run. Jen and Posh ran a clean and fast pattern. Nothing was out of the ordinary. It was a great run and after the tenth balloon, Jen started to pull up.

According to Jen, the “last thing I remember is turning and looking behind me to see if I got all my balloons in my run (which I did!). Then complete darkness for about 10 hours. I remember screaming, hyperventilating, the feeling of my eyes being irrigated even though it felt like sand paper and the feeling of my beautiful pink shirt being cut off.” 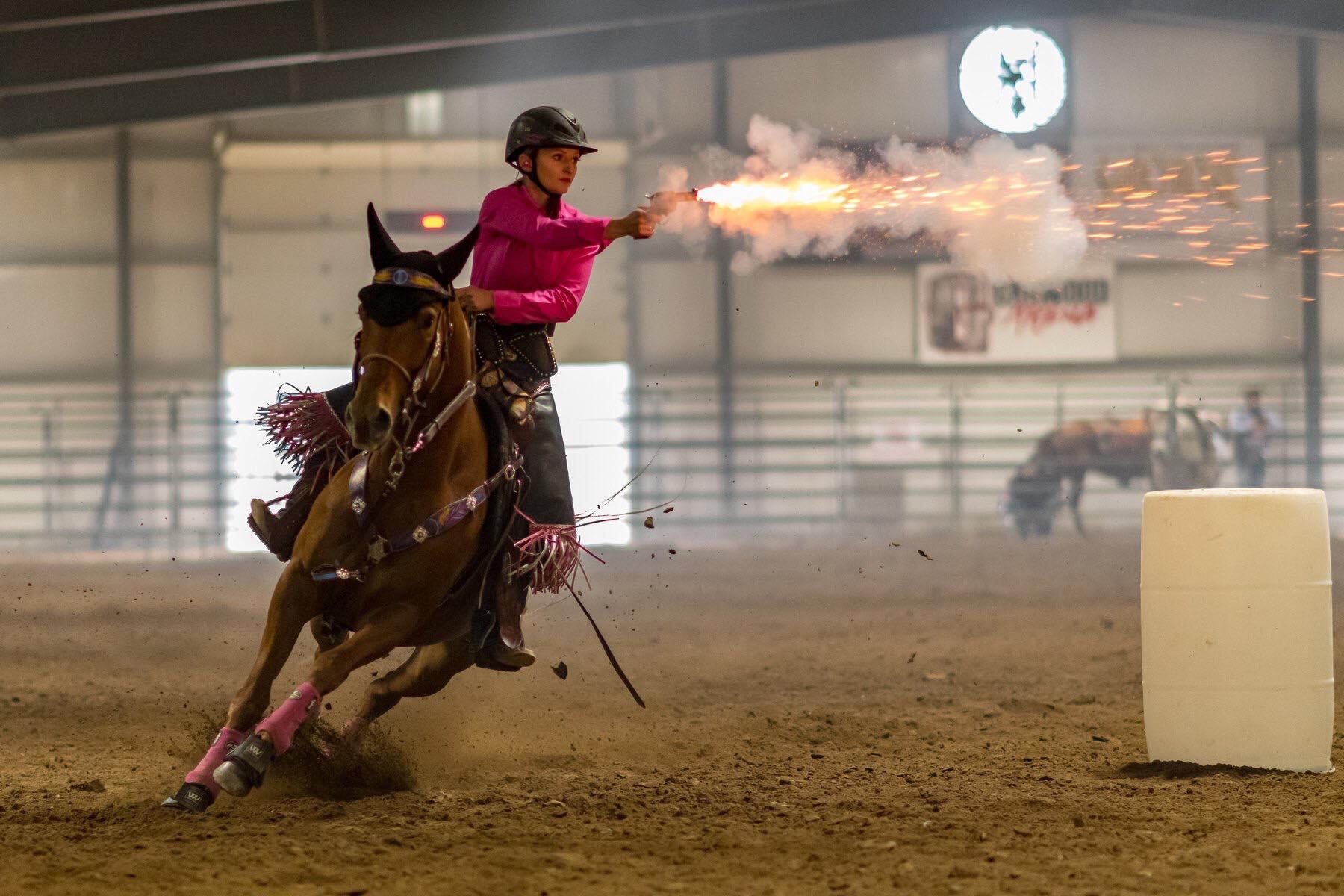 What Jen doesn’t remember and had to be filled in on later is that Posh’s back shoes caught on her front shoes. Instead of the shoes giving way, the horse’s feet got caught up and catapulted her and Jen head first into the arena floor. Posh came down on Jen, mainly on her head and shoulder.

When Posh recovered herself, she got up and trotted off, taking an unconscious Jen with her. After a few strides, Jen’s foot dislodged from the stirrup, she fell a second time and the horse was free of her.

Jen was, of course, rushed to the hospital. She was released that day, but the days and weeks following the accident were filled with more doctors appointments and consultations. On top of a grade three concussion, she injured her back and shoulder. Jen won’t be able to ride for months and her days will be filled with physical therapy. But there is so much for which to be grateful.

Most importantly, Jen is alive. Paul, Georgia and Lily get to have her home with them. Jen’s walking. She will ride again. According to Paul, “That’s why we wear helmets. I truly believe it saved her life.” This is no small thing. Jen’s 1000 pound horse landed on her head. Let that sink in. 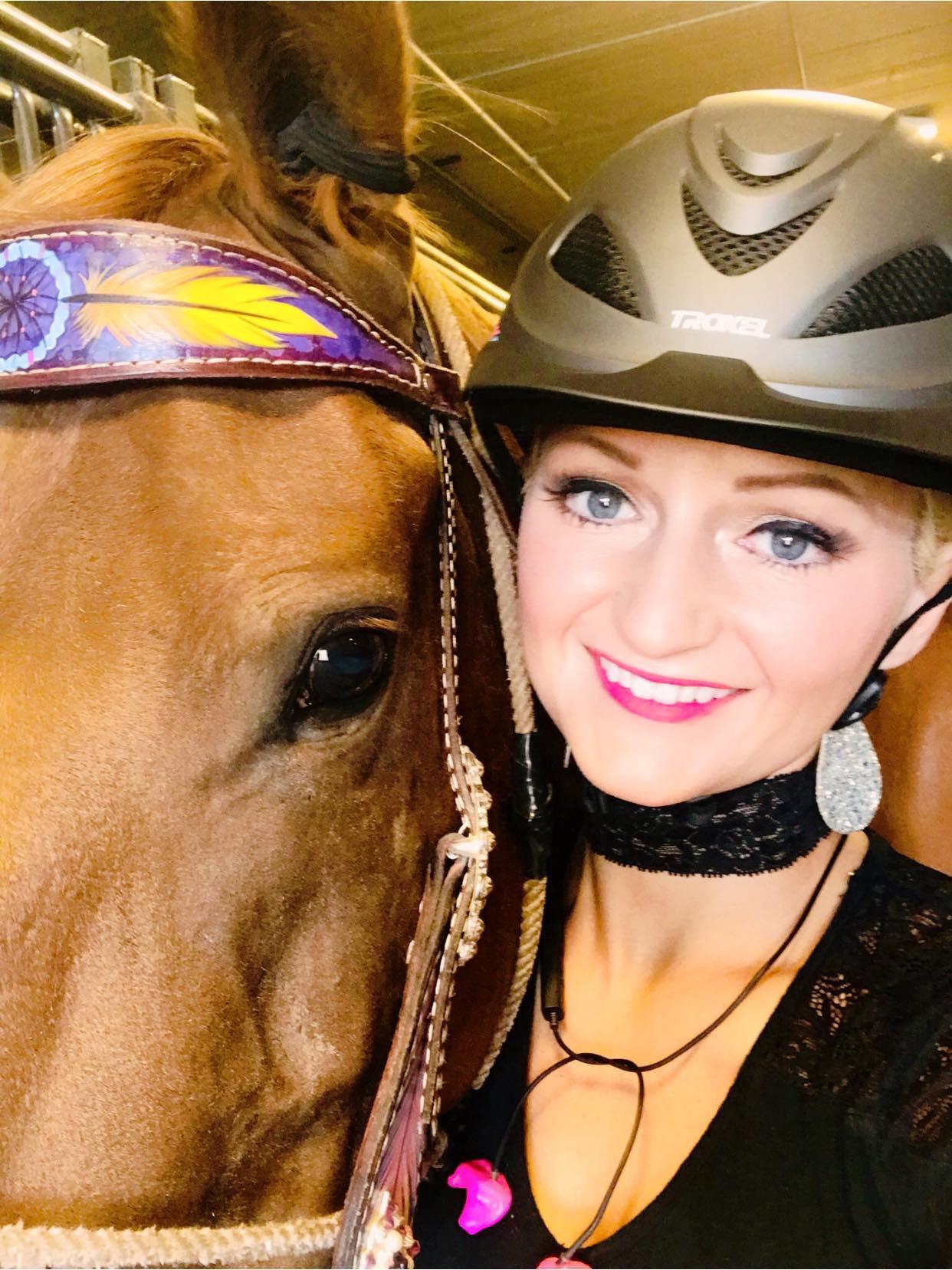 Another amazing thing about this accident is that the girls didn’t see it. When Jen and Paul compete, Georgia and Lily are usually to be found astride their own horses along the outside of the arena. Mercifully, they were in the trailer. They didn’t have to witness the crash.

Also, Posh, Jen’s gritty little red mare, is fine. Despite the fall that could have been disastrous for both horse and rider, she’s sound and unphased. In fact, she went on to help Paul qualify for worlds in Calvary.

Although she has to take time off, Jen will heal. She’s walking, she’s talking and she’ll be able to continue enjoying the sport she loves with her family. 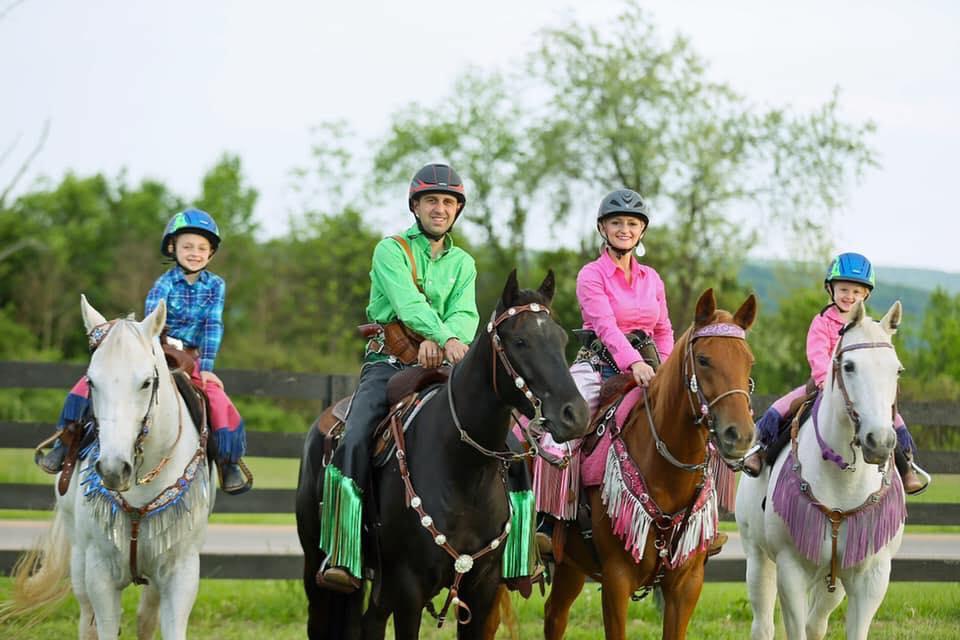 From left to right: Georgia on Holly, Paul on Louie, Jen on Posh and Lily on Becky. Photo by Lance Jeffrey.

After seeing the impact and realizing the potentially disastrous outcome of the accident, my casual approach to helmets has changed. I still won’t tell you or anyone else what you have to do, but I’ve purchased my first helmet for horseback riding. And I’ll certainly encourage those I know to wear one. The risks are simply too great not to wear one (and what took me so long?).

It’s a shame that sometimes it takes an accident that hits close to home to have important messages to sink in. That’s human nature, I suppose.

Jen and Paul live in Central Pennsylvania with their daughters, Georgia and Lily. They compete in Cowboy Mounted Shooting as a family. Paul is sponsored by Troxel Helmets and they own Treas Horse Trailer Sales. 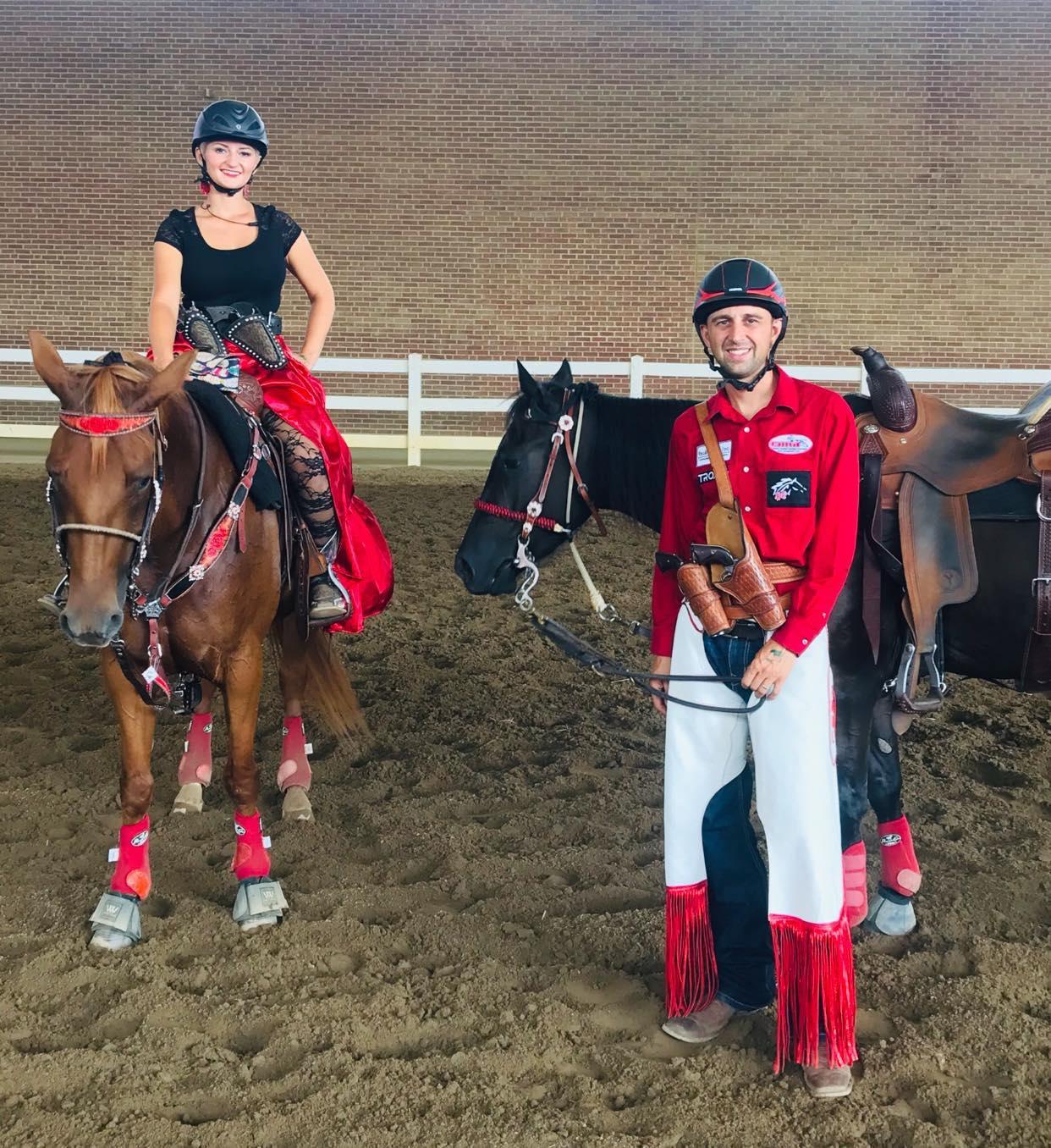 Jen and Paul with their horses. Photo courtesy of Jen Treas.