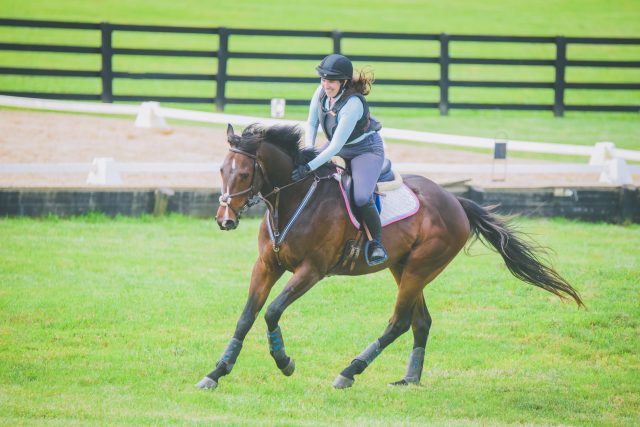 “I was having more fun and less stress riding than I had in a long time. I was enjoying our journey so much and each week I reveled in the progress we made. For once the struggles, though frustrating, just weren’t that bad because the fun rides far outweighed the bad rides.”

For 673 accepted trainers, the journey to the Retired Racehorse Project‘s 2019 Thoroughbred Makeover has begun! Over the next nine months, three of those trainers will blog their journeys, including their triumphs and their heartbreaks, successes and failures, for Horse Nation readers. Kristen Brennan shares how her plans of selling Geoffrey fell apart in the best possible way. 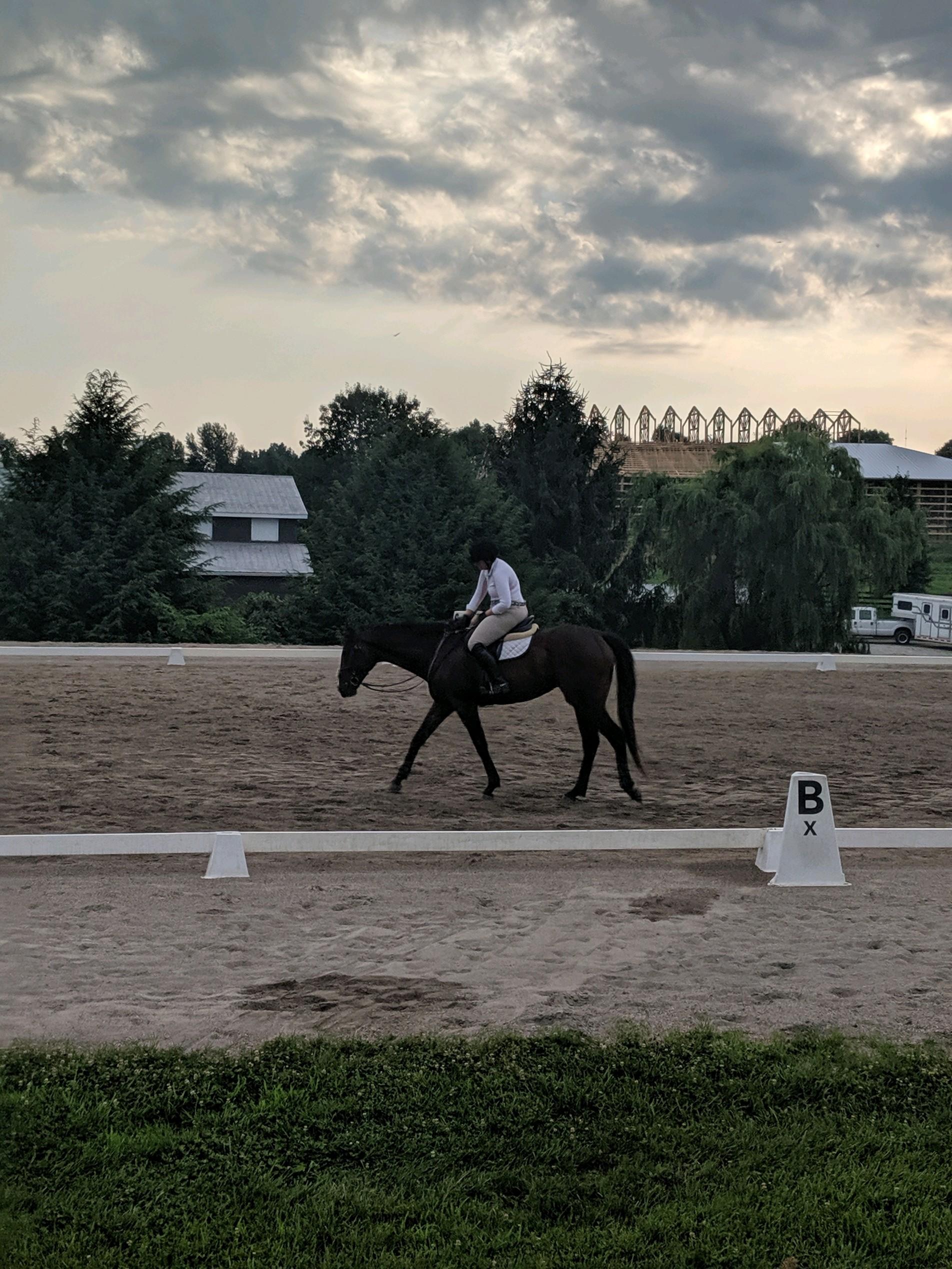 A quiet moment at an early morning show with Geoffrey. Photo by PC Marty Riney.

I’ve poked fun at myself quite a bit about the impulsiveness (and possibly stupidity) surrounding how I ended up on this journey to the 2019 TB Makeover bringing home a green OTTB on a whim after a bad 2018 eventing season. Looking back, I’m not really sure why I thought it was a good idea nor do I know why my husband didn’t hand me divorce papers as I pulled in the driveway with the horse I was supposed to just “go look at”.

I reasoned with him that I just wanted to ride him for a few months to have something to play with while I figured out going forward with Marcus, and I would sell him come spring. Ever the optimist, my husband would say, “Why don’t you give him some time before you decide to sell him? What if he’s perfect for you?” Yet I would quickly dismiss him and go on about how great of a resale prospect he was.

At first, I never wavered on this. As we drove away from the track, the friend who found him for me offered to take him on commission when I was ready. When I had my vet examine him, we discussed his resale potential since he was big, pretty and quiet. As I unloaded him, I promised my husband the extra stall he occupied would be empty by spring.

The idea was to keep Geoffrey eligible for the RRP so that after a few months of taking my mind off retiring Marcus, I could sell him to someone who wanted to compete at the Makeover. So, I did all the things that you do for a resale horse. I pieced together a bridle from the assortment of tack I had collected over the years. When it got cold out, he got hand-me-down blankets that didn’t quite fit but did the job. I tagged any social media post with #ottbforsale.

Every time a friend asked me about him, I mentioned that he would make someone a really nice horse when I sold him in the spring.

But then it started. After a few months, I decided the track halter with a plate that said “Ghost Rocket” needed to be retired and we needed to get one with “Geoffrey” on it. I justified it by telling myself a nice new halter with a chin clip would make it easier to take it off when I went to turn out. 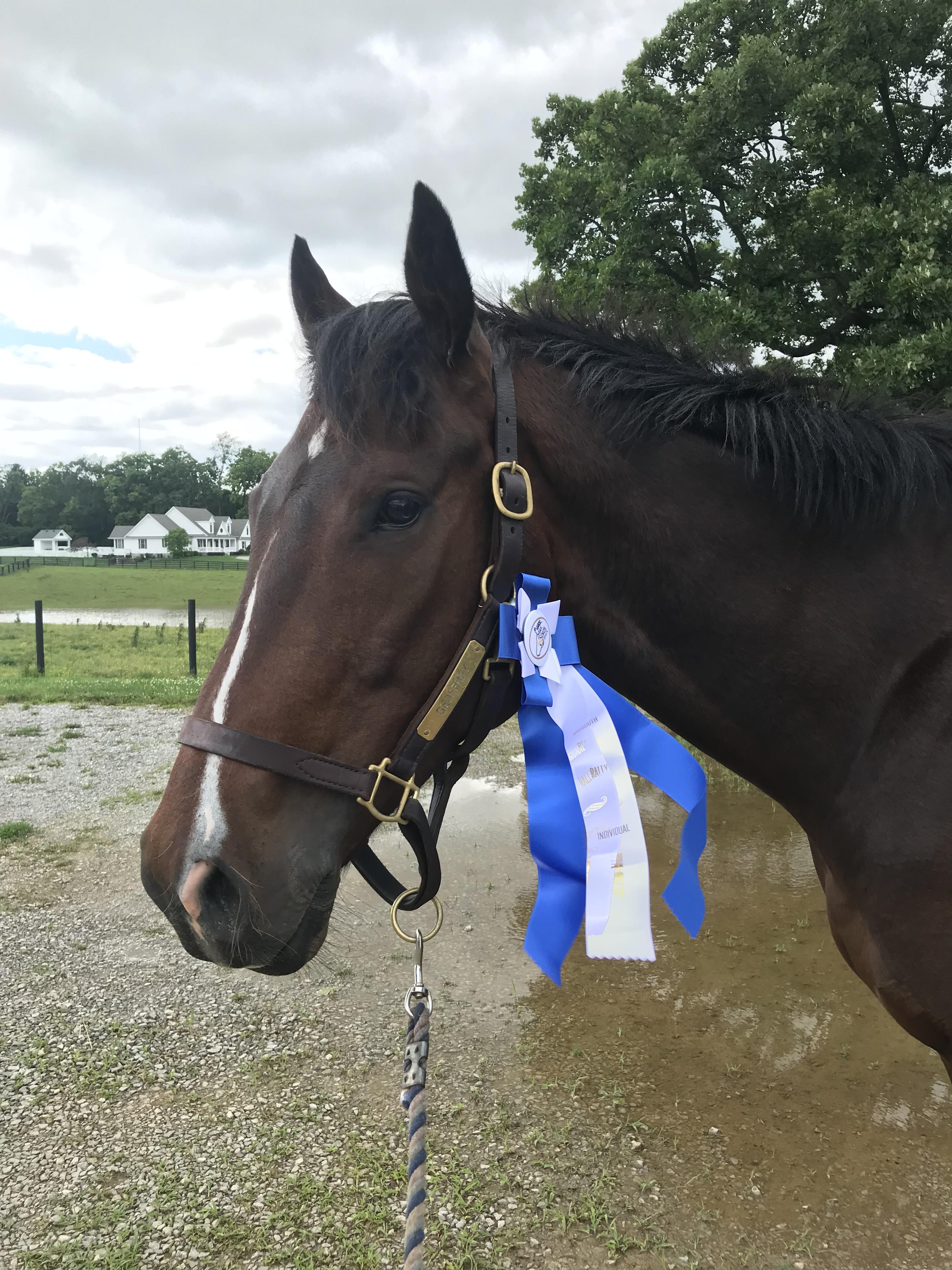 The halter that started the unraveling my resale plans. Photo by Kristen Brennan.

Next came a set of new blankets. Because Geoffrey was only going to be a temporary member of our herd, I had outfitted him in the assortment of old patched up blankets I had kept as back ups over the years. But as the days got colder, I found myself clicking on emails advertising sales just in case I spotted a deal. Next thing I knew, I had ordered a full set of new blankets for Geoffrey, justifying it by telling myself I could resell them after he was sold.

Before I realized it, Geoffrey had a new bridle, a new fan for his stall and a freshly re-fitted jump saddle. But he was still going to be sold in the spring.

Then I began to let myself plan things for the future. First, I decided he needed a show name just in case we did any shows before he sold. I laughed as I typed “Snap Decision” into the USEA horse registration form (because “Complete Lack of Impulse Control When You’re Sad” was a tad too many letters). I figured I might as well poke fun at my impulsiveness if I was going to name a resale horse. 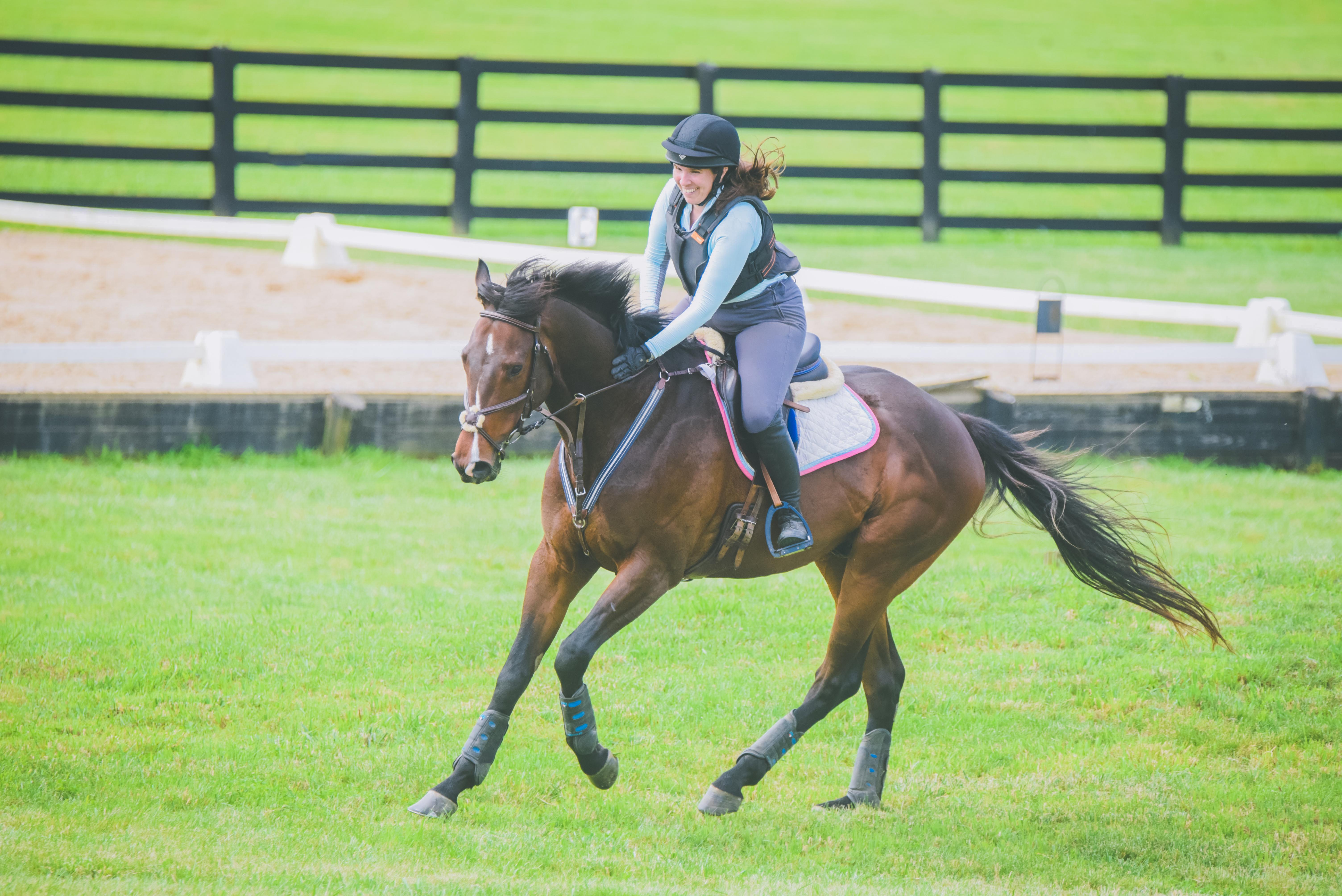 As application calls went out for the 2019 TB Makeover, I debated about applying before I ultimately hit submit. Afterall, I had to at least apply since I was supposed to write a blog series all year about working towards the 2019 event. Then I sent in an entry for our first horse show because, well, March wasn’t technically spring….

Spring came and went, and I found myself dragging my feet a bit more. I started talking about what disciplines we would compete in at the 2019 TB Makeover and how maybe we would shoot for a real event in the fall. When I’d catch myself saying those things, I’d quickly mention it was only if he didn’t sell first. But deep down the truth was, I was getting attached and I selfishly wanted to keep him for myself .

I was having more fun and less stress riding than I had in a long time. I was enjoying our journey so much and each week I reveled in the progress we made. For once the struggles, though frustrating,  just weren’t that bad because the fun rides far outweighed the bad rides. My husband noticed early on how much my attitude towards riding changed, but he would just smile and say, “Okay, that sounds like a plan” when I would talk about selling Geoffrey.

Finally, one day in early summer, I came out of the dreaded Claiborne Ring at the Kentucky Horse Park after Geoffrey quietly packed me around stadium despite pony carts whizzing by and chaos all over. When I realized I had just jumped around clean in the ring that had caused me so much frustration and heartache in the past, I started crying and told my husband I didn’t want to sell him. He laughed and me and said, “I’ve been waiting for you to admit that. I was never going to let you sell him”. 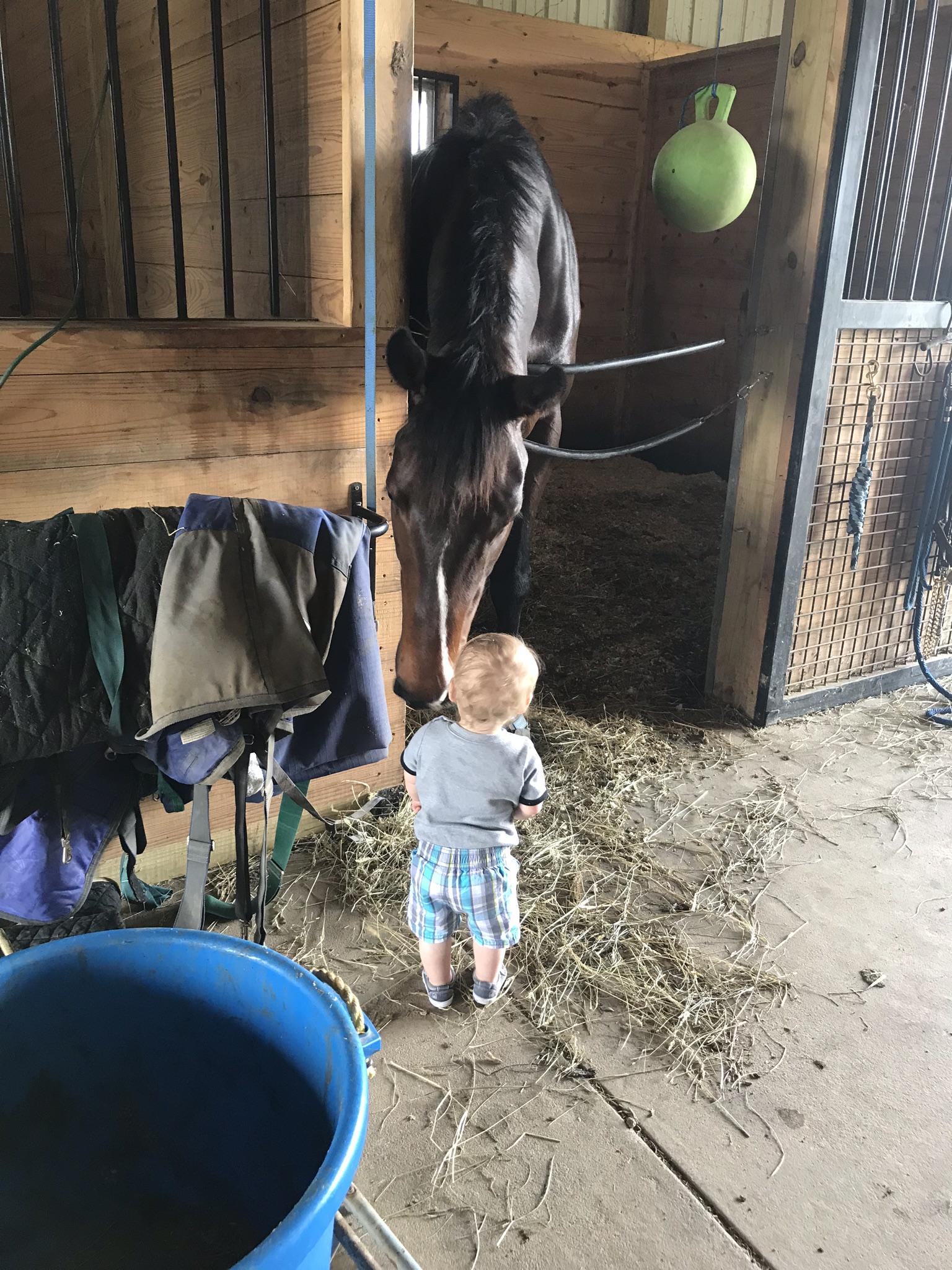 Geoffrey and my son Thomas. Photo by Kristen Brennan.

So I guess Geoffrey has officially become a #resalefail and he is mine for keeps. We’ll be putting our 2019 TB Makeover entry to good use in a few weeks competing in dressage and show jumping. No matter what happens at the 2019 TB Makeover, our extra stall will still be permanently occupied by the best thing I ever failed at.