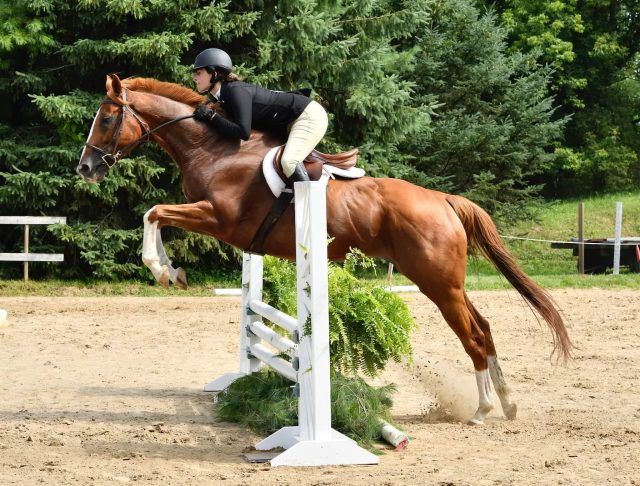 “The reality of the matter is you can try to win the ribbon for today or you can play the long game and teach your horse the skills in the show ring that they need to be a superstar.” 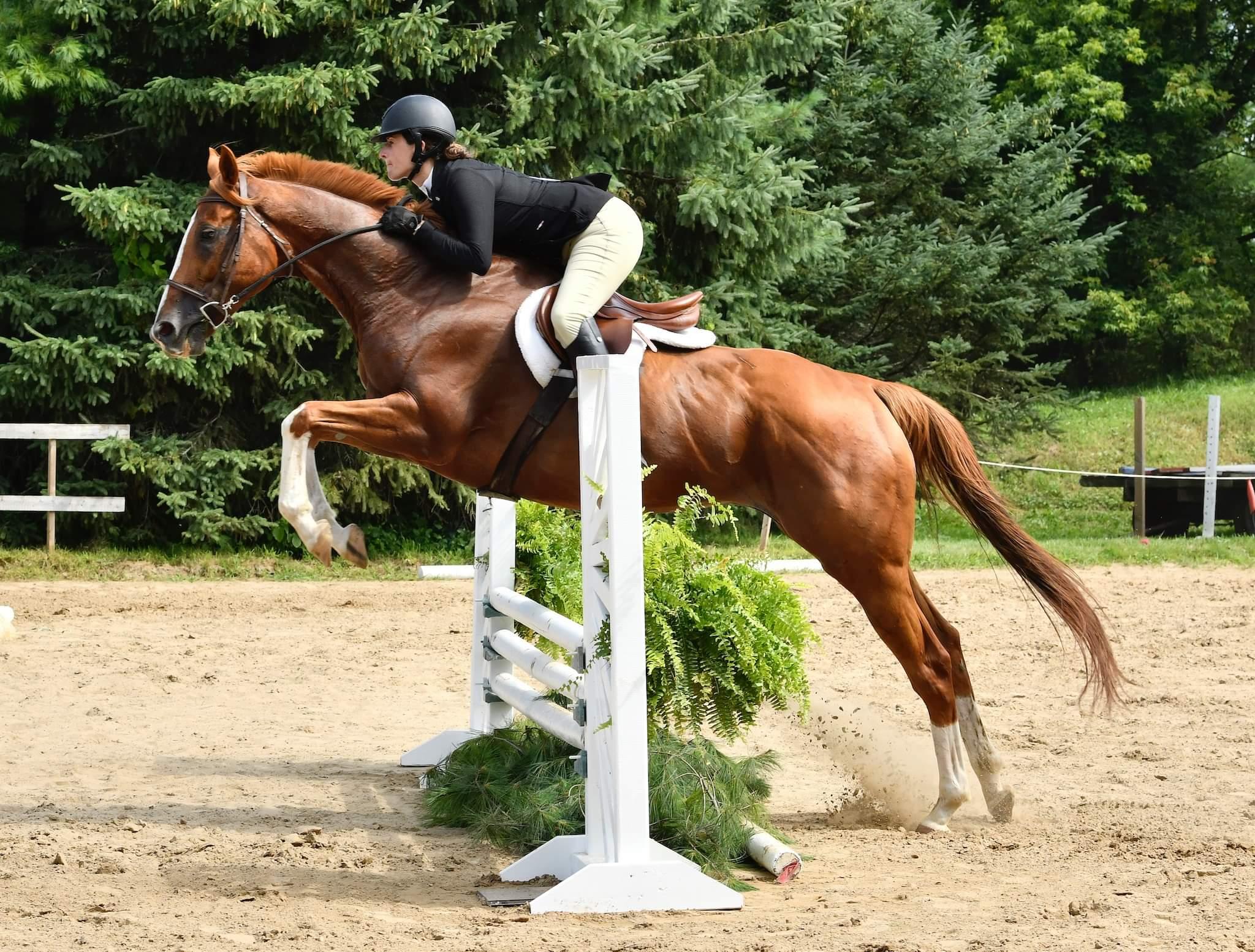 It is finally here, the Mustang training challenge is next week in Georgia. I will be going down with my two Mustangs and we certainly have been doing our best to prepare.

At this point my boys have been exposed to a variety of experiences, but only Kaibou has competed. Meraki is only trained in hand and has been working on Liberty because we do not have to ride them for the Mustang challenge. However, there is an optional open show with riding classes in which Kaibou is entered.

To help prepare my horses for the competition, I have what I call sacrifice shows. These are shows where I know I am not going to win but I’m entering them anyway so I can give my horse the experience. It is when I really put the experience for my horse as the first priority, where I’m not trying to go fast, and I will go as slow or make corrections as I need so my horse stays in the thinking frame of mind and learns to be a confident thinking show horse. 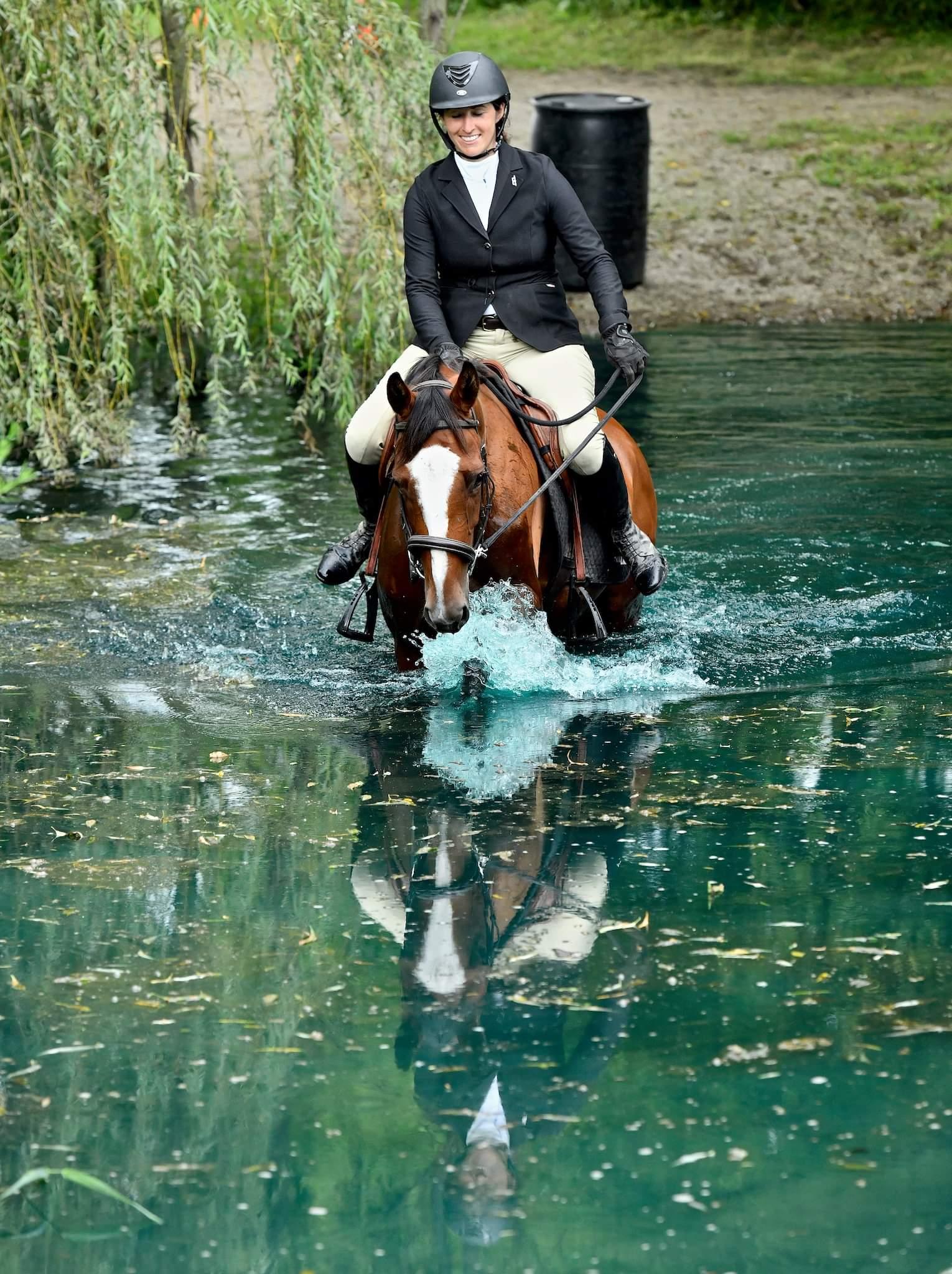 A Three-Step Approach to Making a Great Show Horse:

Here is a video of Meraki’s first offsite schooling:

To me it is so important that we put the relaxation first. It can really pay off to do a few sacrifice shows before competing.

For example, if you are doing a jumping show and you get two refusals you get excused from the ring, which is a bad experience for your horse. So you want to make sure you set up your horse and yourself for success.

You would be better off to show at a lower level show and get permission ahead of time to do more than two refusals if this an issue for your horse. But if I’m at a jumping show with a green horse and they refuse a fence but then get over it, sometimes I will purposely circle back and repeat the jump again which disqualifies me for going off course but reinforces to the horse to jump that fence. Or I might continue the course but stop and end the course before I reach a fence my horse will refuse because if I get a 2nd refusal I’m out and we would leave on a bad note.

When it comes to the obstacle shows in extreme cowboy racing, we need to go fast. But at the first race I went slow and walked most of it with a little bit of trot. Fast forward to our third race and we were doing a lot more canter work. This is to slowly build him up, gain confidence and make sure I encourage my horse to be a thinking horse — I would rather a thinking horse than a fast horse.

Take a look at the difference between Kaibou’s first race and his third race.

Meraki is going to do his first show this weekend at a fair in the halter and showmanship classes so he can do it in hand. But let’s say that we are doing the haunch turn and he messes it up and doesn’t do it properly. I’m going to sacrifice the show and do a second turn to make sure he does it properly and understand what he was supposed to do.

Another example is during one of my extreme cowboy races with Kaibou. There was a bridge that he did go up onto but he kind of fell off the side. Typically when that happens you are supposed to just move on to the next obstacle, but because I wanted him to learn to be more careful about his feet, I circled back and I did the bridge again even though it cost me more time and did not earn me any more points.

With Bling at the jumper shows, I am trying to get her to learn to be careful and accurate. When she lands on the incorrect lead I take the time to slow her down, rebalance and then take the correct lead through a simple change if needed even though it means taking the wider corner and slowing down. If I were trying to win the jumper round I would want to maintain a faster rhythm. 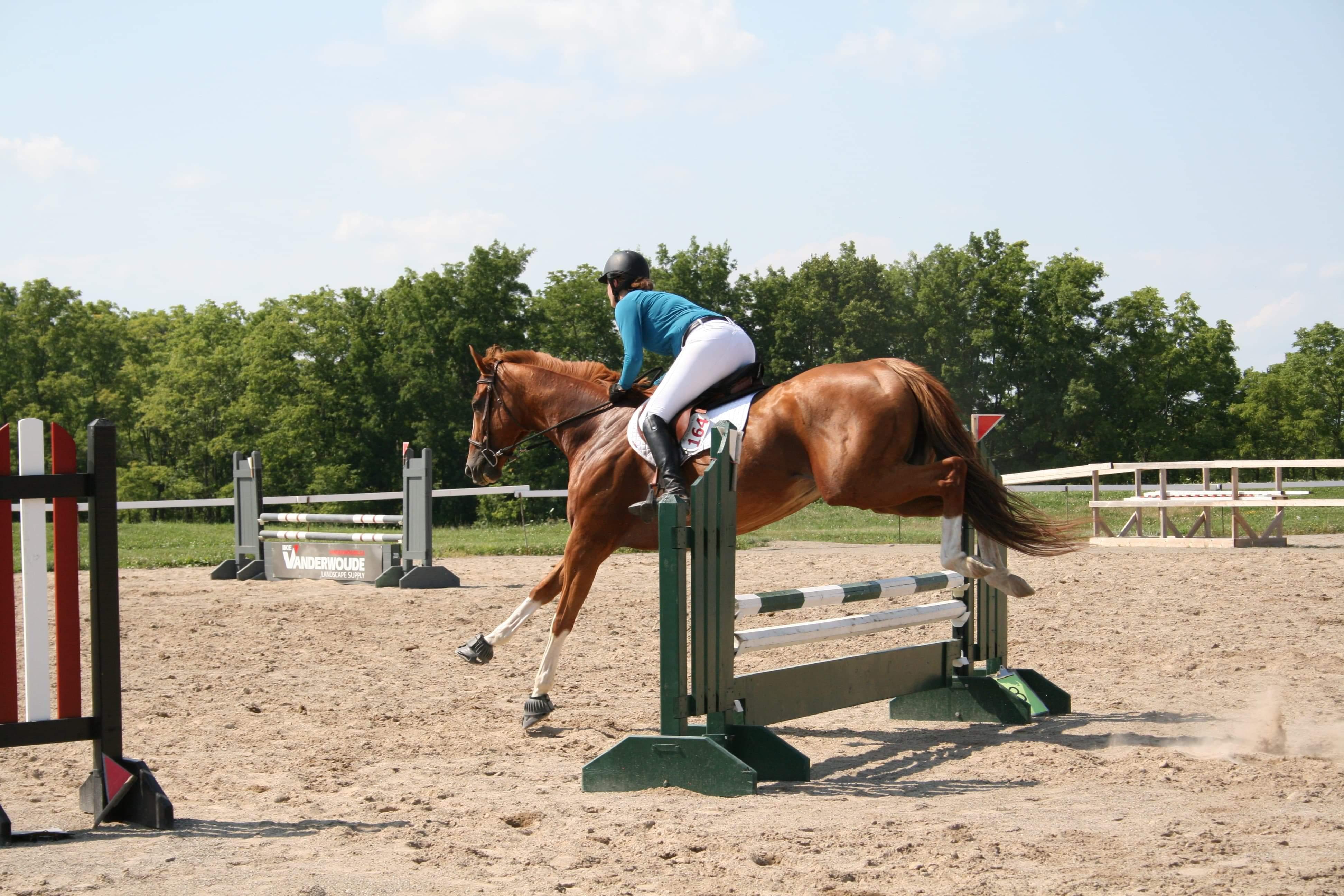 The fact of the matter is, you can try to win the ribbon for today or you can play the long game and teach your horse the skills in the show ring that they need to be a superstar.

Whether it’s in training or my clinics, I see a ton of horses come in with big issues. I’m offered free horses on almost a daily basis from people at their wits’ end with a horse. Often the issue has been a horse would do something a little bit wrong but it was not corrected, and then it progressively gets worse until it becomes a problem. Then the horse has a bad habit or has learned that it can be naughty or get away with certain things in the show ring.

If we just teach our horses that we are willing to sacrifice the ribbon for the sake of correcting them and making sure that they complete the course or the task correctly then they will never learn that the show ring is a place where they don’t have to be accurate.

Whenever I need to make corrections to my horses, I always try to do it with calmness and without punishment. I do not want to create anxiety in the show ring. I want the show ring to be a happy place.

I try to give a correction that will make sense to the horse. For example if they stopped at a fence, I think why did they stop at the fence?

If it was because they were scared then I will usually allow them the chance to stop and just breathe for a second before we circle back and do it again. If they didn’t understand or we were not straight or we had a bad take off spot, then I will circle back and try to readjust so we can get it right.

If they miss a bridge or fall off the side then I try to re-approach and keep them super straight.

If they are doing something like drifting towards the out gate, then I may bump my inside rein and my outside leg. Whatever the reason or issue is I avoid punishment like spurring or hitting them with a crop for the sake of it.

If a horse is drifting to the left and you use a left spur, this is a correction not a punishment because the horse could do something to release the pressure. It is negative reinforcement which encourages a thinking frame of mind. However, if a horse stops at a fence or does an obstacle poorly and you spur them but there is nothing the horse can do to make it right, that is punishment. Punishment puts them in an emotional place.

Research has shown that when you use punishment, it puts a human or an animal into an emotional state. I want my horses to stay in the thinking frame of mind so I focus on corrections that make sense and avoid punishment.

Here is Bling at the Thoroughly Thoroughbred show:

Here is Fairly at the Thoroughly Thoroughbred show:

All of my horses have made massive progress this month and I’m super proud of where they are, but at the same time it has been challenging fitting in the hours with having a newborn at home. We are not quite where we want to be.

I will be leaving for the Georgia Mustang Challenge next week and I had hoped to do our freestyle routine bridleless, but so far I have only been able to fit in one ride where we were bridleless. Realistically I don’t think we will be ready to go bridleless for the challenge. However, the routine we have put together is pretty darn impressive with the big blue tarp anyways. 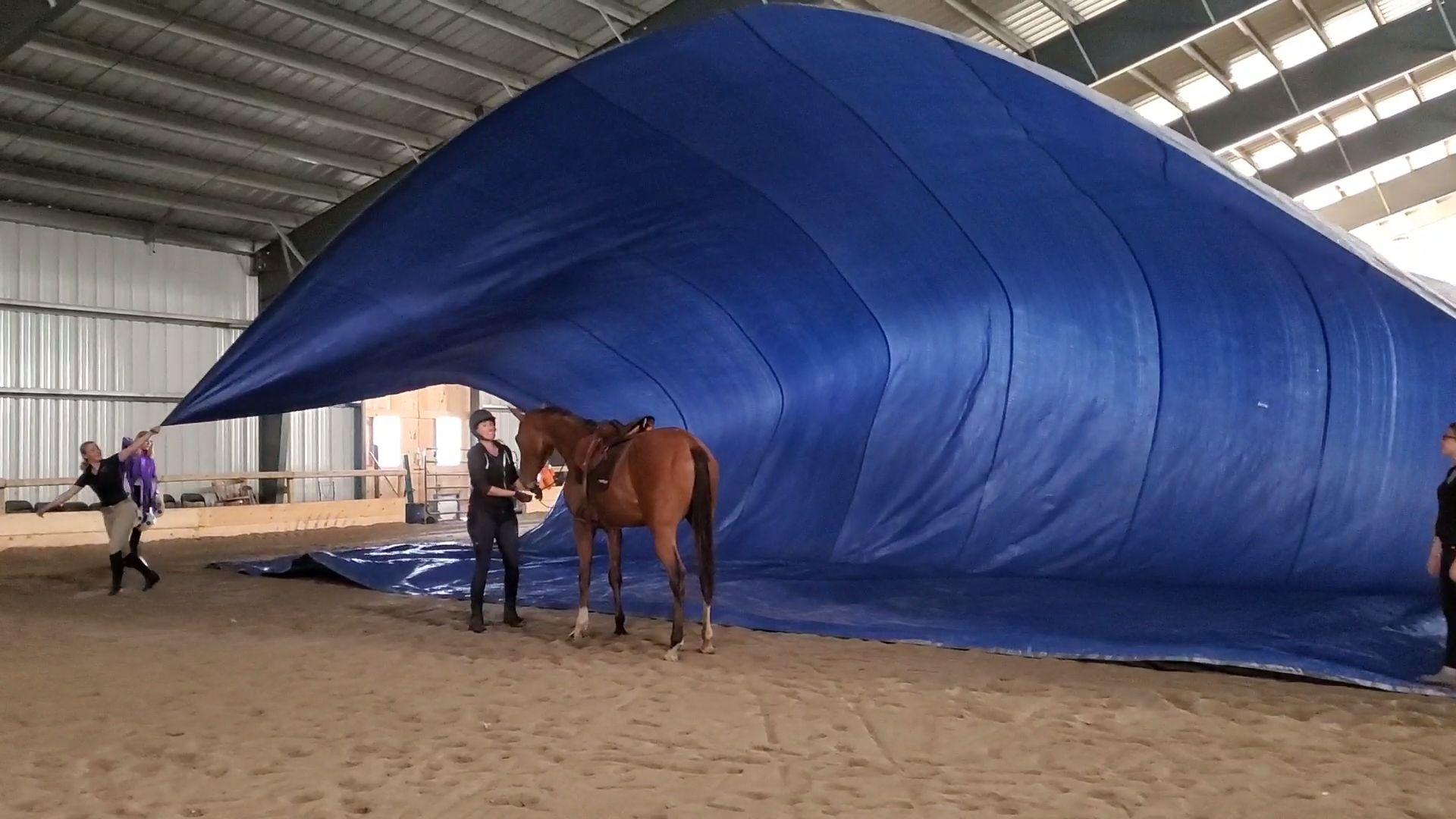 You can check out Kaibou learning about the big blue tarp for the first time in this video:

Fairly’s first time with the big blue tarp practicing for her freestyle:

I can’t wait to share with you next month how the Georgia Mustang Challenge went, and we’ll see if the sacrifice shows have paid off. 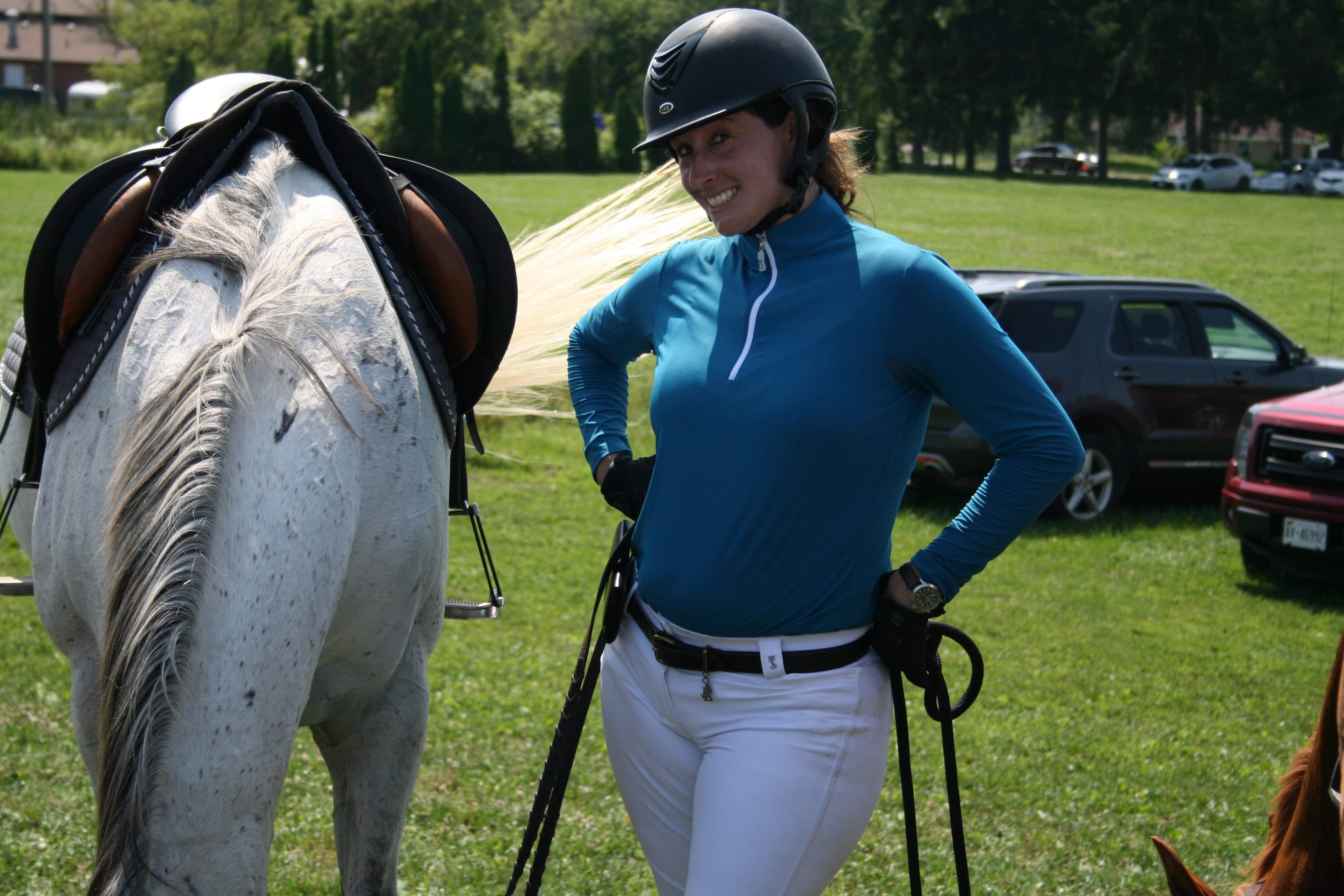