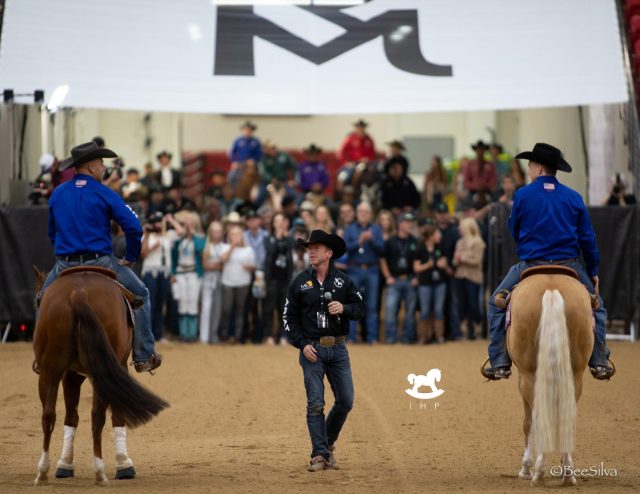 September 4, 2019DeAnn SloanDeAnn Long Sloan#reining, #RUN FOR A MILLION, Performance of the WeekLeave a comment

Cade McCutcheon and Craig Schmersal come out on top as co-champions of the Run for a Million.

I won’t lie, I was pretty into the Paramount Network’s The Last Cowboy. My loyalty to unscripted television is fairly limited, but there was just something about watching the talented riders on their reining horses that drew me in. Therefore, this week’s Performance of the Week goes to the co-champions of the Run for a Million, Cade McCutcheon and Craig Schmersal.

Even though these performances technically occurred two weeks ago, the results of the competition with the biggest purse in reining history were kept secret until last Wednesday, so we’ll let it slide in order to recognize these two amazing riders.

Cade McCutcheon (Aubrey, TX) –  Cade is the youngest rider ever to be named on Team USA for the World Equestrian Games. The son of million-dollar riders Tom and Mandy McCutcheon, Cade is following closely in their footsteps, launching his professional training business just out of high school. During the Run for a Million, he competed on Custom Made Gun (Colonel’s Smoking Gun – Custom Made Dunit – Hollywood Dun it).

Craig Schmersal (Scottsdale, AZ) – Schmersal is ranked #3 professionally, with more than $4 million in lifetime earnings.  In 2017, he won the “NRHA Level 4 Open Futurity” and has won the “National Reining Breeders Level 4 Open Derby Classic.” He was a member of the US Team at the World Equestrian Games in Kentucky, winning Team Gold and Individual Silver medals.  He is also a gold medal winner in the World Reining Masters. During the Run for a Million, he competed on No Smoking Required (Colonel’s Smoking Gun – Icing Required – Smart Chic Olena).

McCutcheon  and Schmersal tied with a score of 229.5 and, rather than doing another run to determine who would come out on top, they chose to be co-champions, splitting the first place purse and earning $250,000 each. Although some may have wondered why they didn’t battle it out for the top spot, both recognized each other’s quality runs and didn’t want to tax their already fatigued horses.