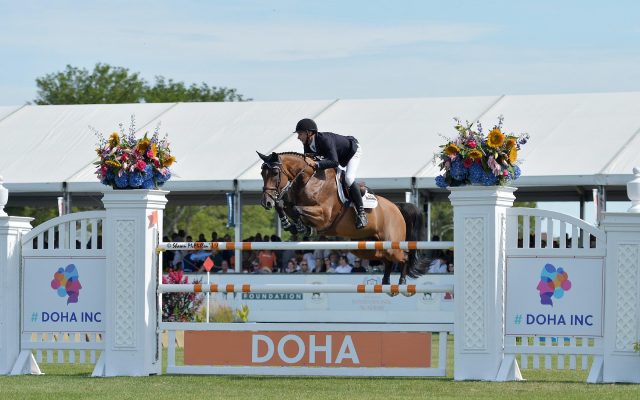 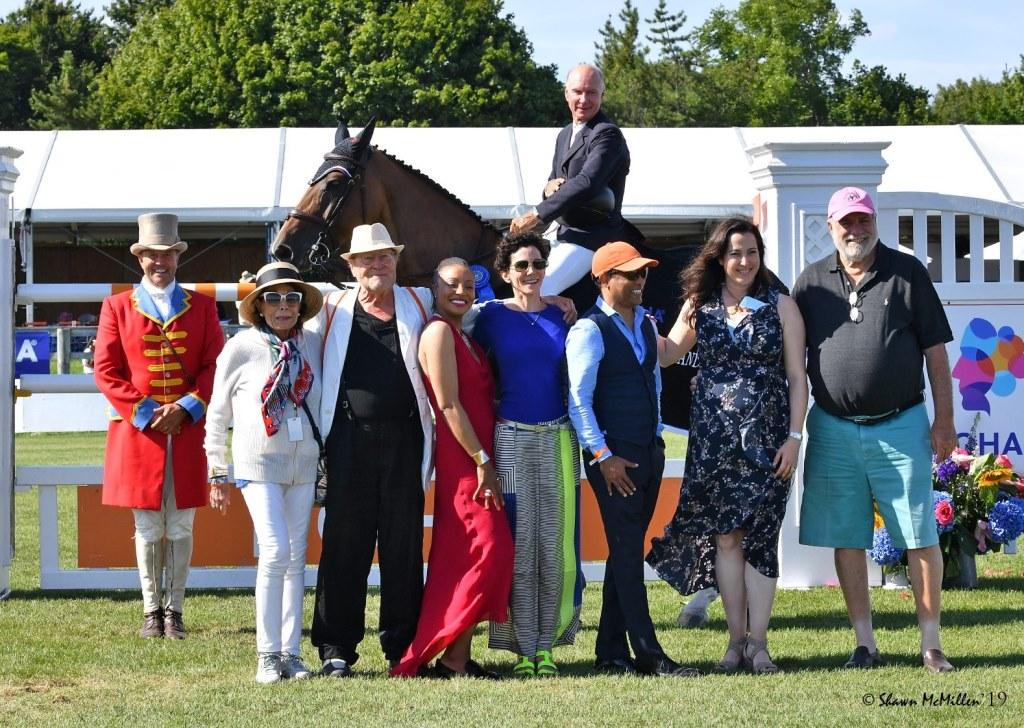 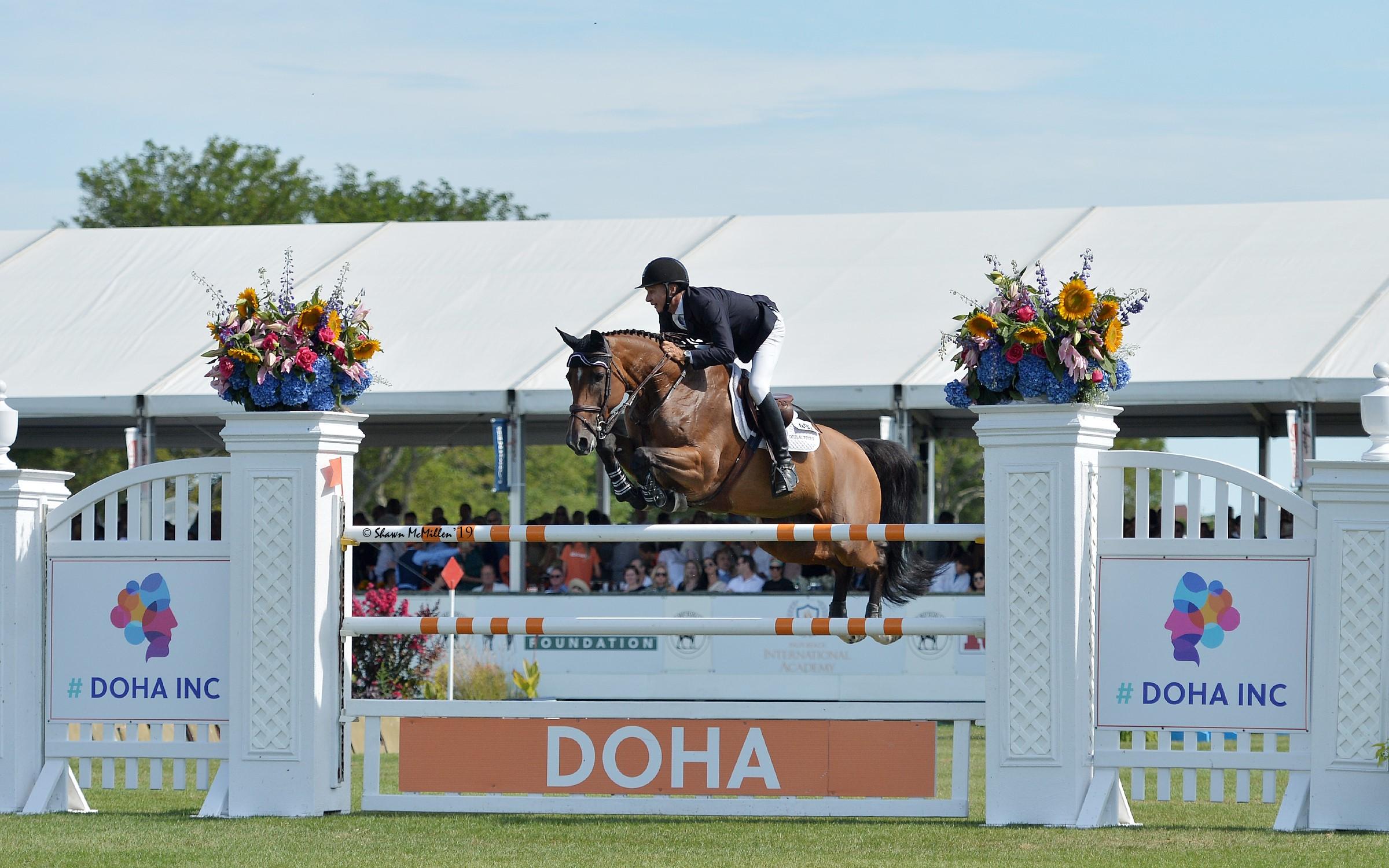 Riding ‘Bardolina’, Mario Deslauriers won the 44th Hampton Classic Horseshow’s $300,000 Grand Prix CSI4* Sponsored by DOHA, INC. Deslauriers is a native of Canada and is a two-time Canadian Show Jumping Champion, having represented Canada at every major international competition. He presently resides in New York with his wife, Lisa Tarnopol Deslauriers, and their daughter Lucy Deslauriers. Lisa has been the Chair of the Hampton Classic Board of Directors for the past ten years.

Lucy Deslauriers, who just returned from being part of the U.S. bronze-medal winning team at the Pan American Games, had a stellar week at the Classic. On Friday she won the $75,000 Douglas Elliman Grand Prix Qualifier. On Sunday she was the last to jump and came a very close second to her father in the HC Grand Prix. Although Lucy and Hester had the best time, they pulled the top rail on the final fence, to finish second. Lucy later stated, “I got a little excited. If I had it to do over again, I should have pulled a little harder to the last fence.” 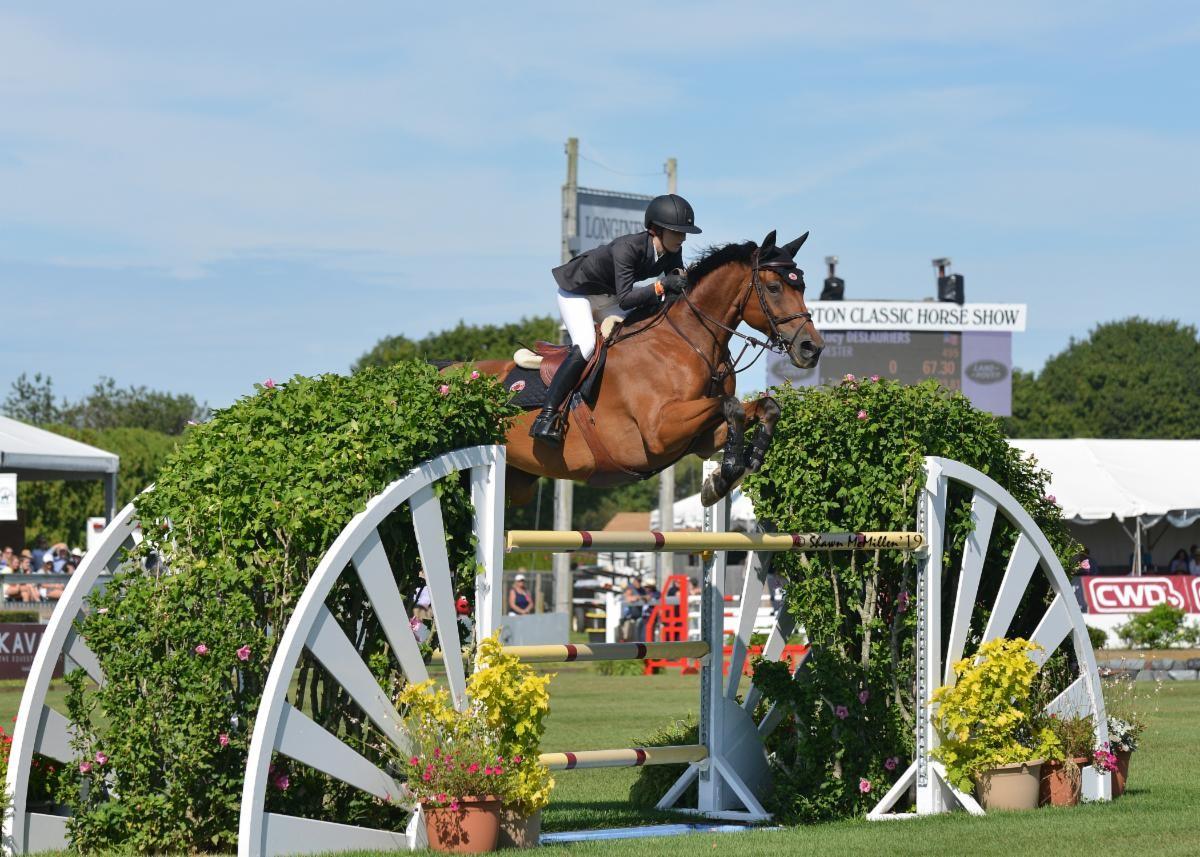 American team gold medalist from the 2018 World Equestrian Games Devin Ryan, with his WEG mount Eddie Blue, was the first to go in the Grand Prix competition, sandwiching Mario Deslauriers between him and Lucy. Ryan misjudged the striding to the second fence and Eddie Blue knocked it down. They finished third with only four faults.

For each of the seven years the $30,000 LONGINES Leading Rider Challenge has been in place, it was won by an Irish rider, going back and forth between Shane Sweetnam and Richie Moloney. 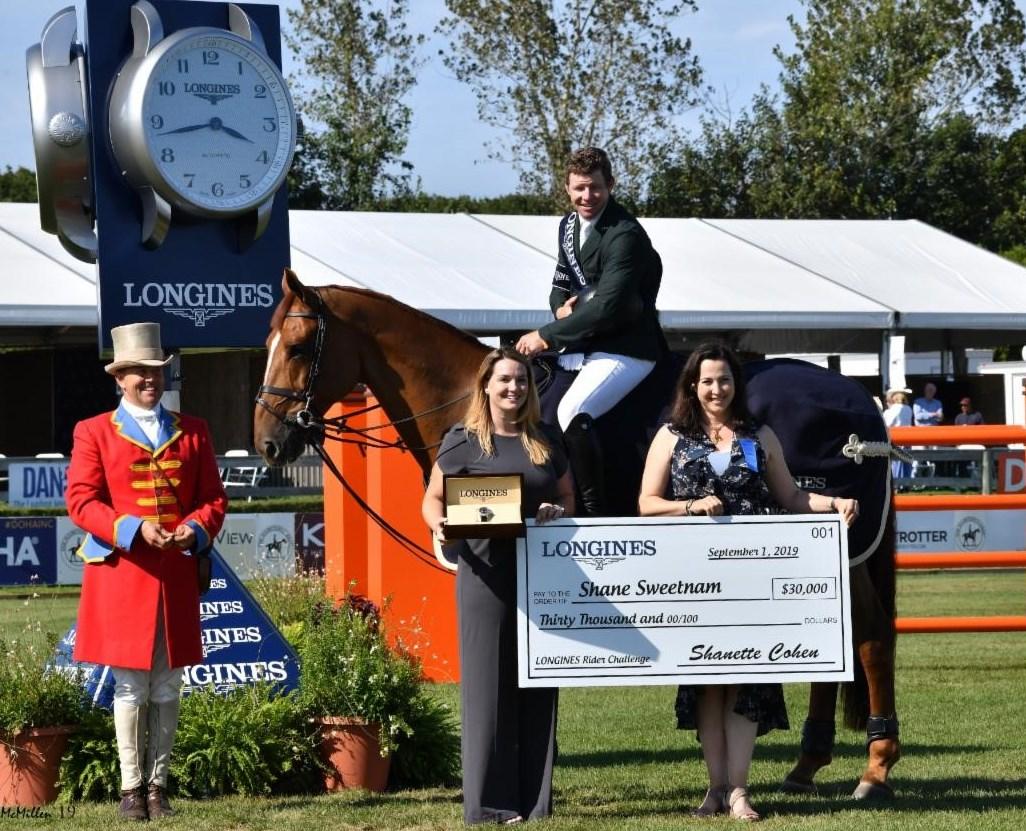 Ireland’s Shane Sweetnam won the $30,000 LONGINES Leading Rider Challenge receiving a bonus check for $30,000 and a Longines timepiece. This is his third time winning this award. Photo by Shawn McMillen.

Only three horse and rider pairs of the 39 entries advanced to the jump-off due a very challenging course designed by Michel Vailiancourt. His course reached a maximum height of 1.60m. He included a triple combination which stretched the jumps, taking competitors most of the length of the entire manicured turf arena. 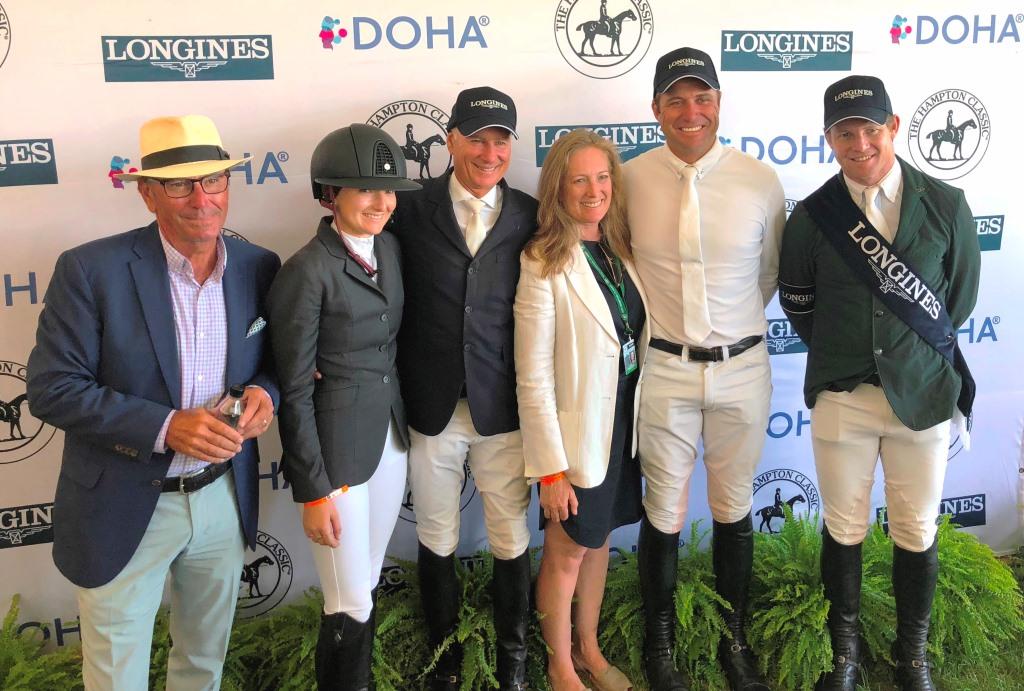 East Hampton native Stephanie Brown Beamer, owner of Hampton Dressage at Pinnacle Farm in Watermill, NY both opened and closed this year’s Classic. An active FEI competitor and trainer, Brown Beamer is a USDF Gold, Silver, and Bronze medalist and a USDF “L” judges graduate. She rode Gryphon Z, a Friesian cross-breed that she purchased as a three-year-old, who has competed through the levels and is now schooling Grand Prix. Their demonstration included a number of upper-level dressage movements along with a shortened Grand Prix Musical Freestyle that was narrated by Anne Howard, a fellow FEI competitor and trainer. 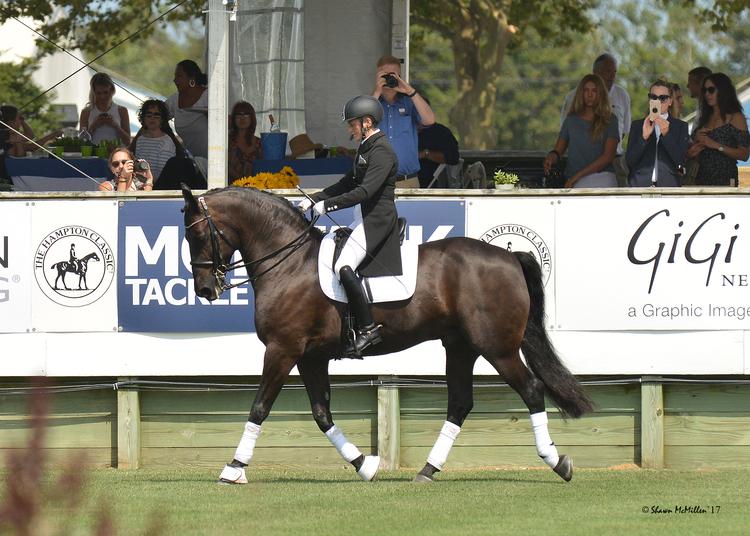 The 44th annual event was one of the most spectacular equestrian events in the nation and showcased the highest level of show jumping competition. The week-long Classic hosted hundreds of top riders and horses from around the world. It featured more than 200 classes in six beautifully manicured show rings and offered five FEI Classes. The 60-acre show grounds was a shopping and dining mecca with a wide variety of foods and kids’ activities, with a luxury Boutique Garden and Stable Row featuring more than 80 vendors. 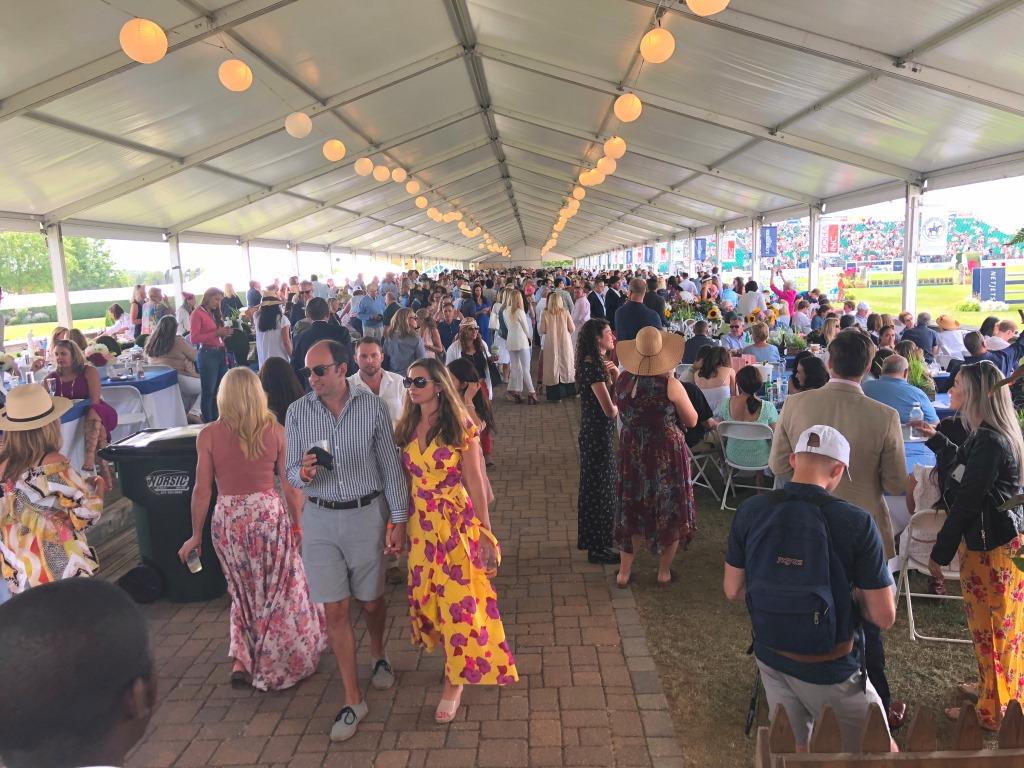