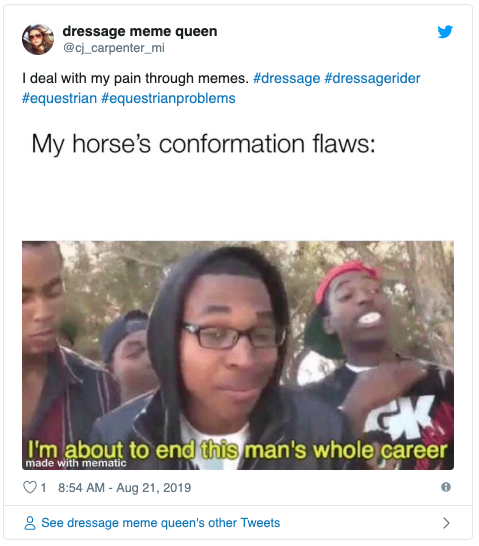 Because brevity will always be the soul of wit.

Zipper tab on my left half chap broke 😢 I tried to superglue the 2 metal bits back together but made things worse. Hoping I can get the zipper replaced in time for my next lesson. Love my ProChaps but they are known for zipper issues #eventerproblems #equestrianproblems pic.twitter.com/UYXzaHvp93

passionate. thrilling. feels so good underneath you. hearts pounding, gasps for air. your hips ache, but you keep going. dopamine levels are spiking with every thrust.

#equestrianProblems:
I saw whoa to LITERALLY EVERYTHING. Dogs, cats, people, my car, other cars on the road (you know this times when you don’t trust people to stop), literally any moving object that I want to stop gets a big ol whoa from me.

There is hay in my shoe…… do I awkwardly take it out in the middle of orchestra rehearsal or do I leave it in there until after? #equestrianproblems