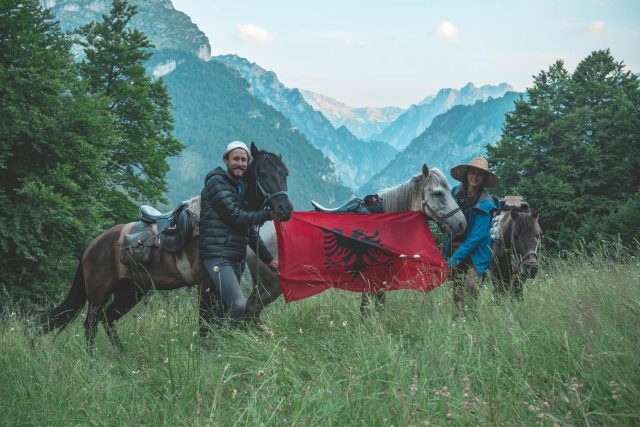 “What we have to say to those who would follow in our footsteps is this: do it! Make your adventure, cross mountains, forge rivers, sleep under the stars… The experience will be enriching beyond words. You will be exhausted, exhilarated, confident and scared.” 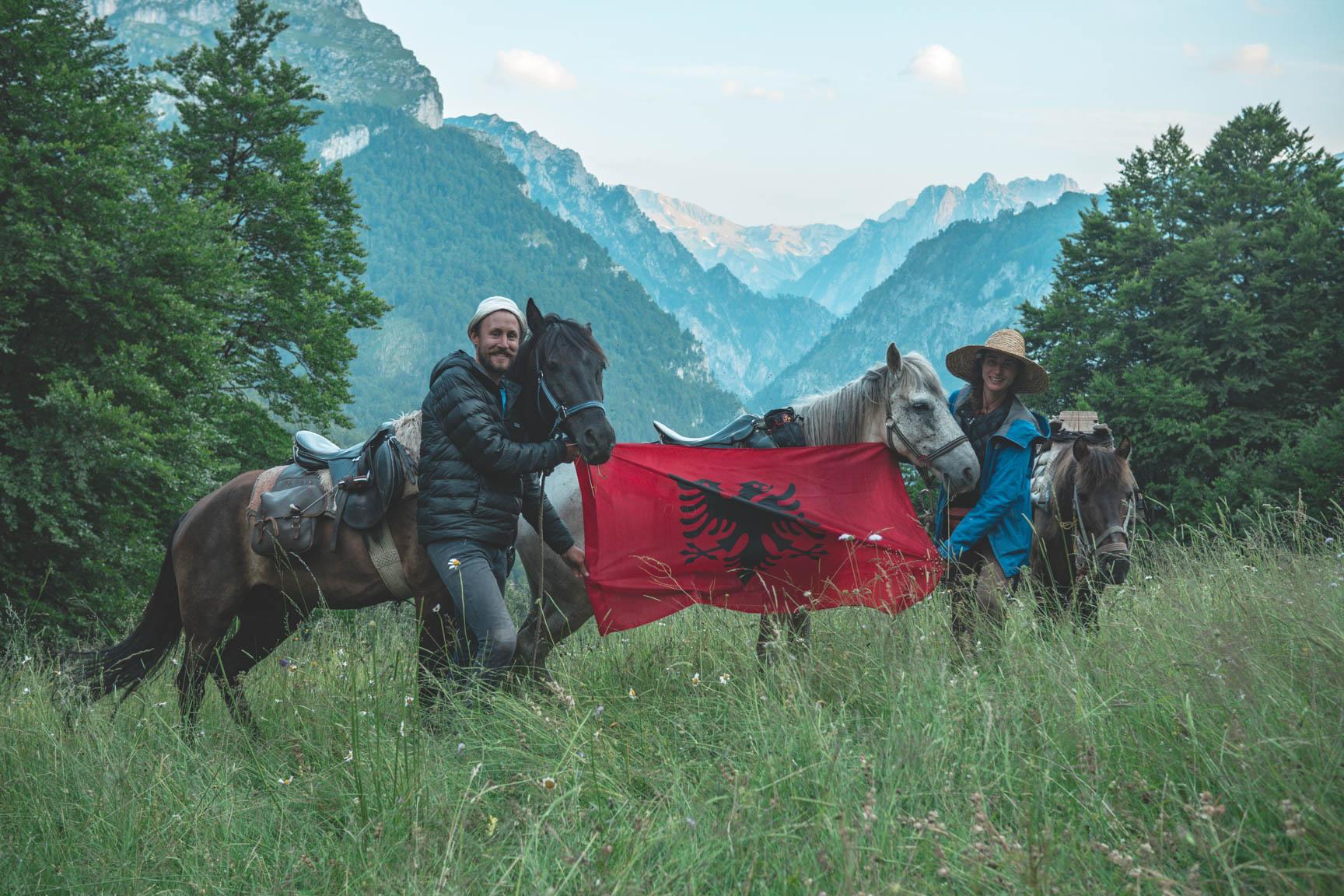 Arriving at the descent into Valbona Valley. We made it! Photo by En Selle. 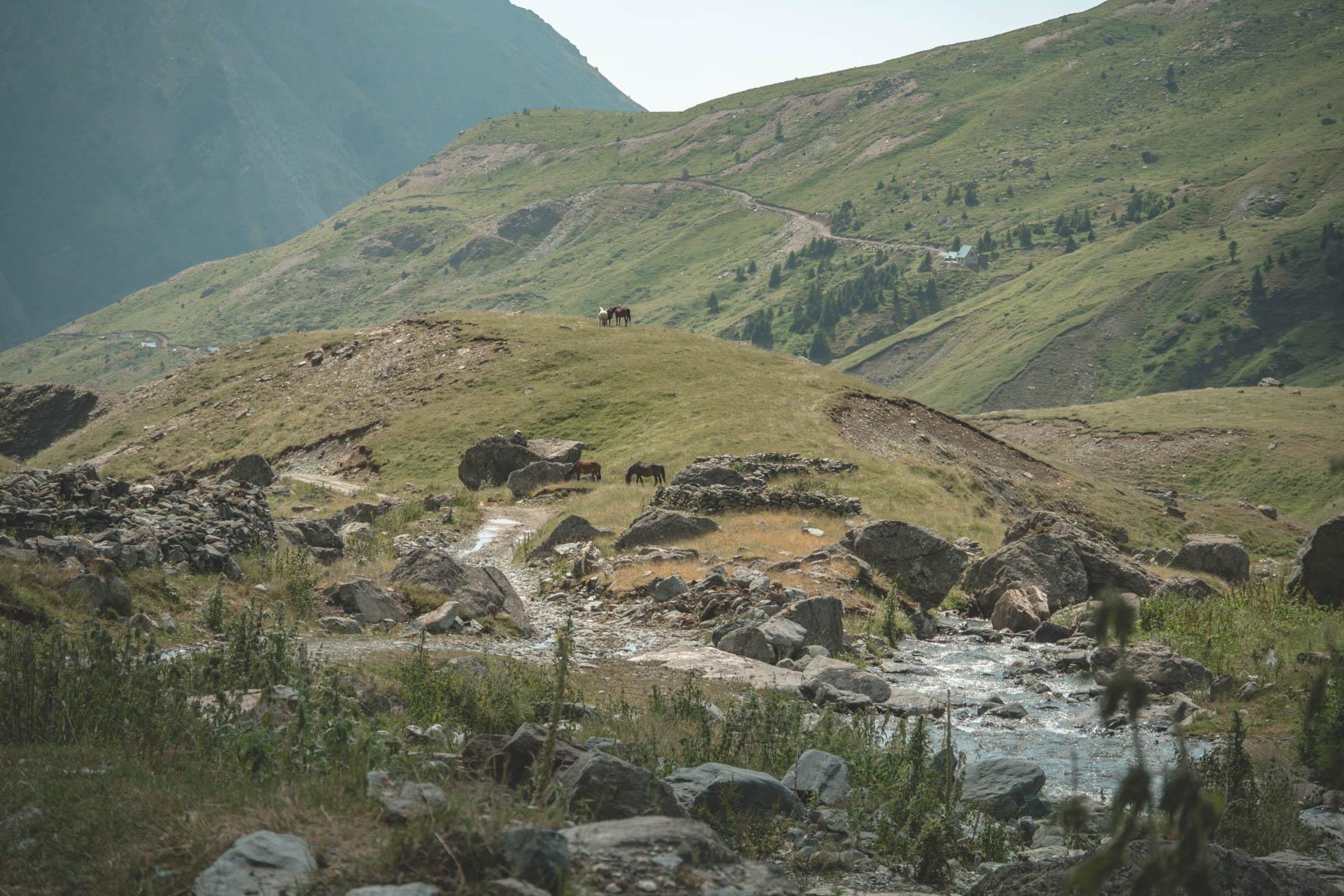 The grass is up to their knees, cold, pure mountain water runs through their pasture; Johnny, Griva and Düldül are home. After meeting us six weeks ago and undertaking the journey of their lives, our three horses are enjoying well-earned time off in their new home in Valbona Valley. Six weeks, 800km and over 20,000m of cumulative elevation gain, our horses are the first horses to cross Albania.

After one month on the road, we realized we were rapidly approaching the end. Our final challenge would be the last 70km through the most ominous sounding region we had yet to face: The Accursed Mountains. 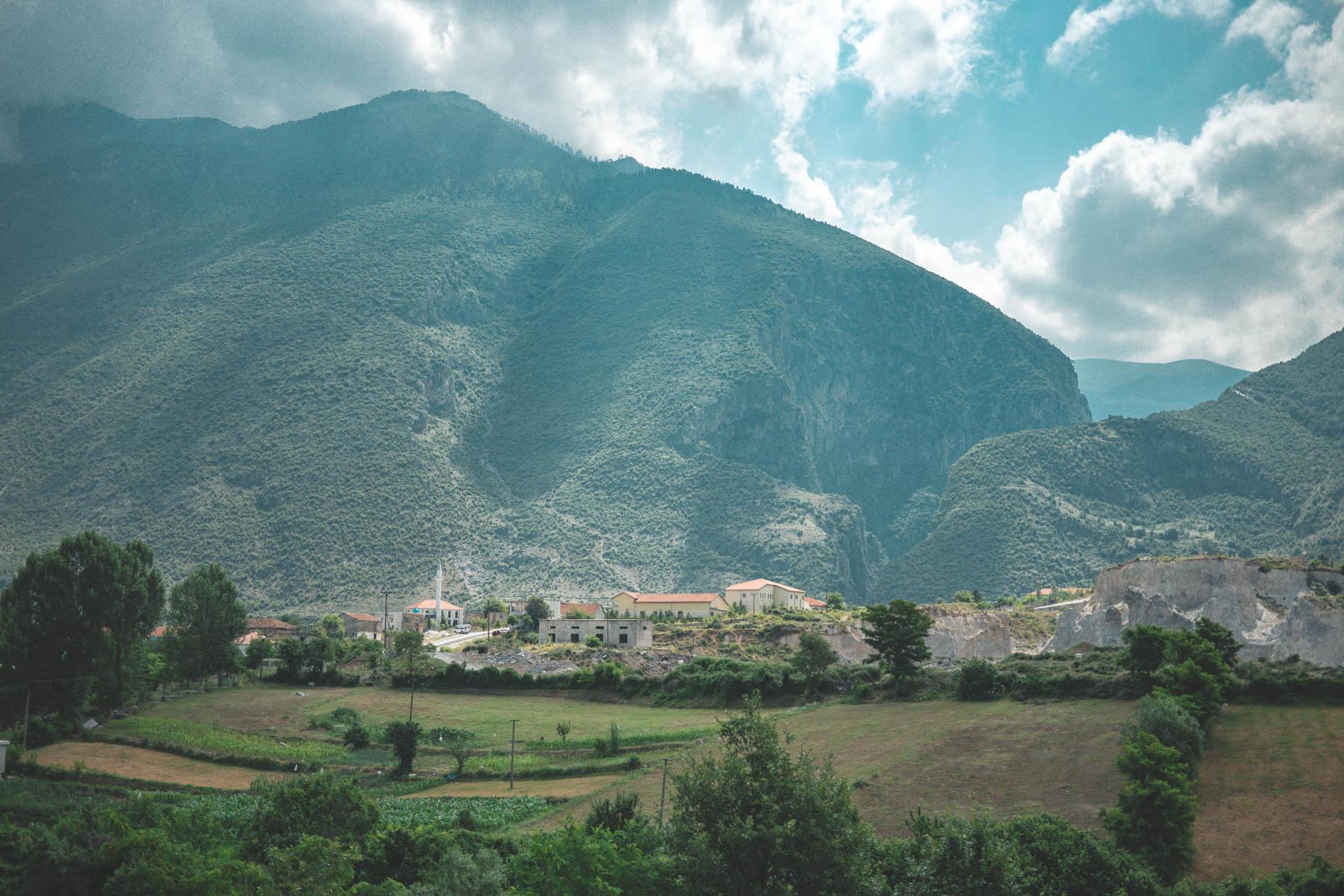 This village near Kukes is Islamic, as indicated by the miranet. The three religions of Islam, Greek Orthodox and Roman Catholic cohabitate peacefully in Albania. Photo by En Selle.

Breakfast view from the tent. Photo by En Selle.

In the Accursed Mountains

To arrive in Valbona is difficult no matter your transport. If you’re coming by car, you’ll need to get to the north of Albania first, which means either a three hour boat ride or coming around through Kosovo, a six hour drive. If you’re coming by horse, you can ride across the plains, but you’ll be blocked by two nearly impassable canyons. Or you can ride up to the Montenegrin border and through the Accursed Mountains. Yes, that is really their name, and yes, we rode through them. They’re a bit like the end of the world — so far off the map, so unreachable by regular transport, and so wild that you don’t know how anyone could survive up there.

Riding into the Accursed Mountains we followed the Tropojë river up and up, seemingly endlessly. The trees towered above us, their girthy trunks revealing their timelessness. The river thundered beside us, making it impossible to talk. All the better, since we were lost in thought, appreciating the last days of the ride.

Once we arrived above the tree line, vast alpine prairies opened up in front of us. Local families make a pilgrimage to this place each summer to graze their flocks and we felt like we were watching a scene out of Heidi as we rode through the lush grass, waving at the kids popping out of the seasonal huts.

By the time we reached Doberdol pass, at a staggering 2200m altitude, we were beginning to tire. As is wont to happen in the mountains, bad weather accumulated around the pass, dampening our day. By four in the afternoon we were only just beginning the descent to Valbona, and we were all becoming impatient, knowing that we still had at least ten kilometers to go before bed.

Our patience got a second wind as we found ourselves riding through a pine forest on the border with Montenegro. To our left we saw finally Valbona Valley, and the deep mountains behind it. Even in mid-summer, the peaks were topped with snow, and the string of mountains seemed endless. The beauty of these Accursed Mountains is indescribable, and maybe it’s better to leave them undescribed than to poorly describe their power. 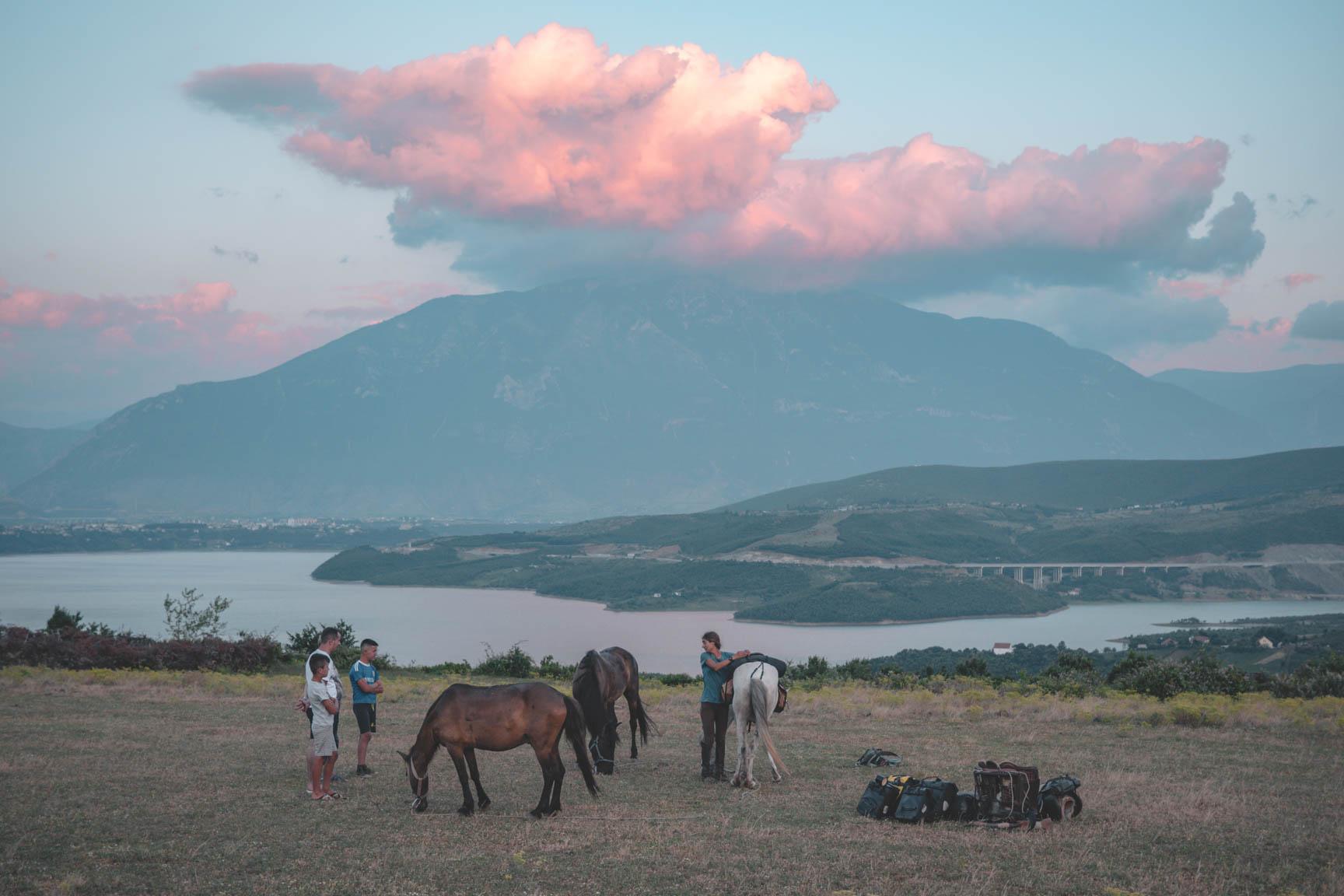 Locals watch as we settle into a field near the village of Myc-Has. Among them the English professor and his two brothers. Photo by En Selle.

Arriving in Valbona after dark, we unsaddled the horses for the last time and cooled them out. Exhausted, we left them in their new pasture. The next day, we woke up and realized it was finished. We had crossed Albania on horseback.

How could it have happened so fast? We sat down and took stock of how much our horses had changed and how much we’d changed as well. The horses, who were previously uncatchable in the pasture, now won’t leave us alone and have to be shooed away if we want to eat breakfast in peace. The riders, who previously fretted over rocky trails, now trust their horses enough to confidently hop from rock to rock.

Our horses’ new home is with an American woman who runs the NGO TOKA in the north of Albania, an organization dedicated to protecting the region from big business operators that would destroy the national park, and to promoting local entrepreneurs’ eco-responsible businesses. Our horses are under her watchful eye, and they are available for local guides to use on mounted tours of the area. Even knowing they will be loved and well cared for, how to you say goodbye and thank you to the horses who brought you so far? We thanked them, hugged them and left, admittedly choking back tears.

What we have to say to those who would follow in our footsteps is this: do it! Make your adventure, cross mountains, forge rivers, sleep under the stars. Keep your horse as your first priority, and let your ego take second, third, even last place. The experience will be enriching beyond words. You will be exhausted, exhilarated, confident and scared. You will meet the most amazing people, and create a deep bond with your horse. And if you choose to make your adventure in Albania, give us a call; we’ll send you all the maps and contacts you need — as long as you give Johnny, Griva, and Düldül a kiss from us when you see them. 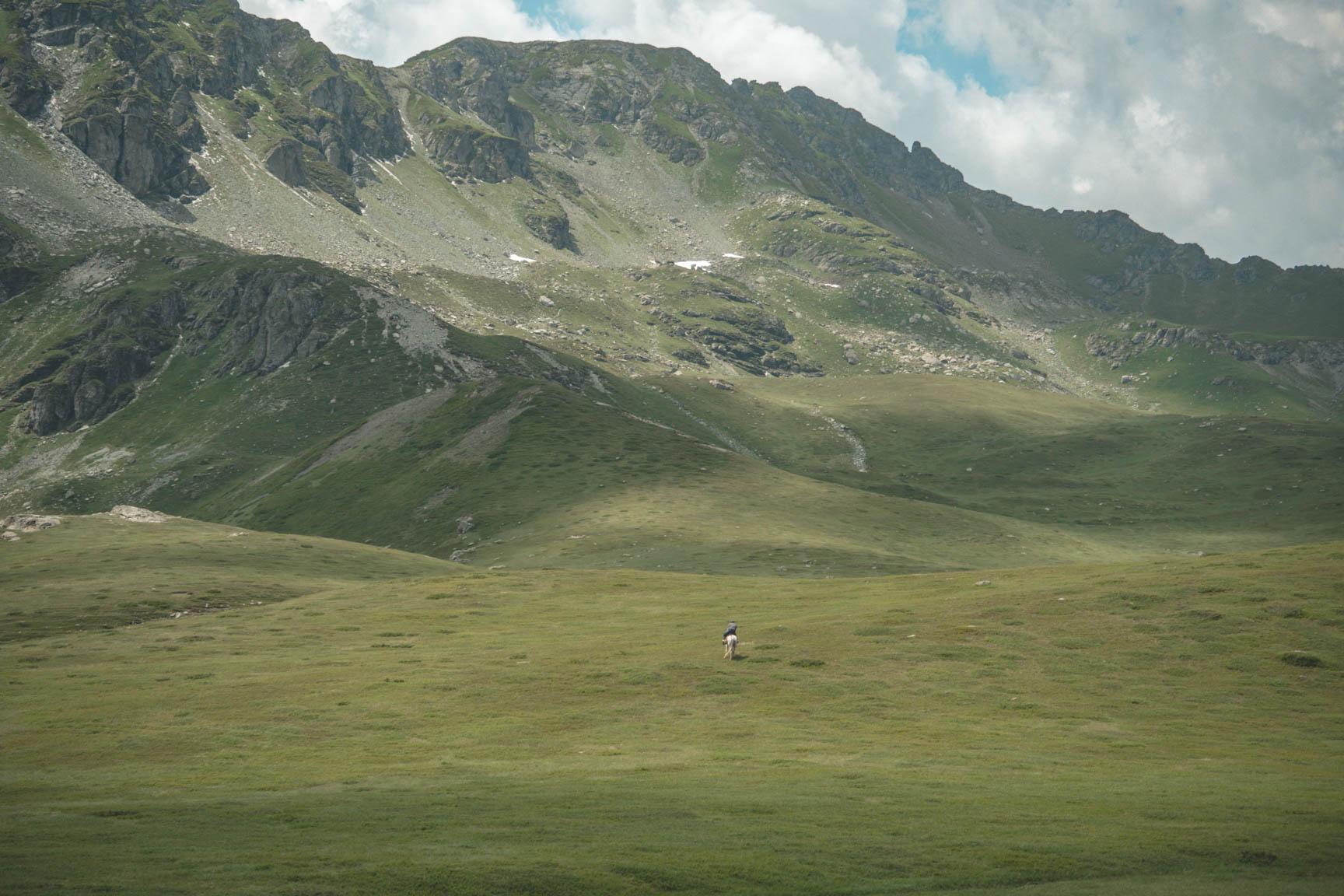 The vast grazing lands above the tree line in the Accursed Mountains. Photo by En Selle. 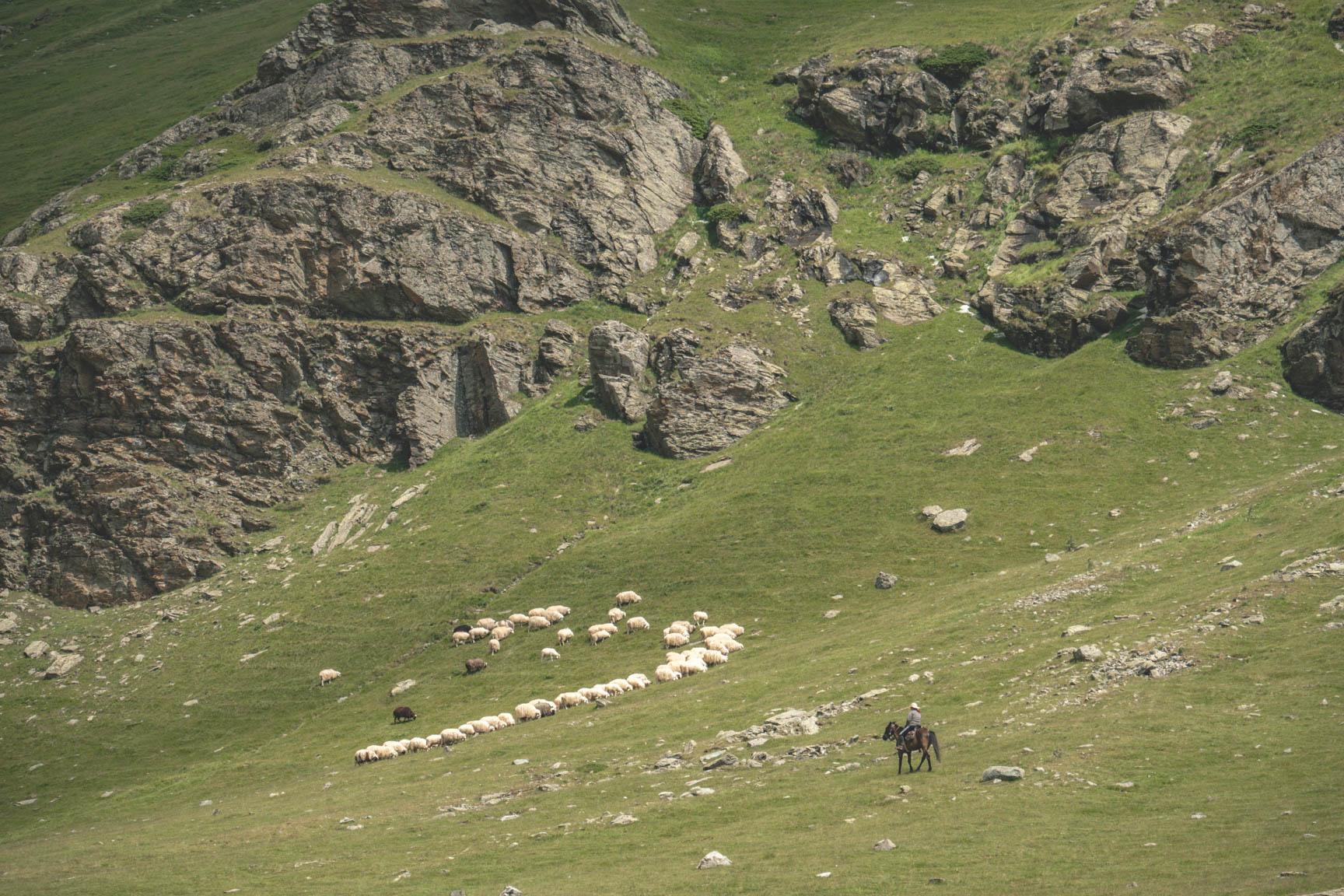 Families bring their flocks here in summer to escape the heat below. Near Doberdol Pass close to Montenegro. Photo by En Selle.