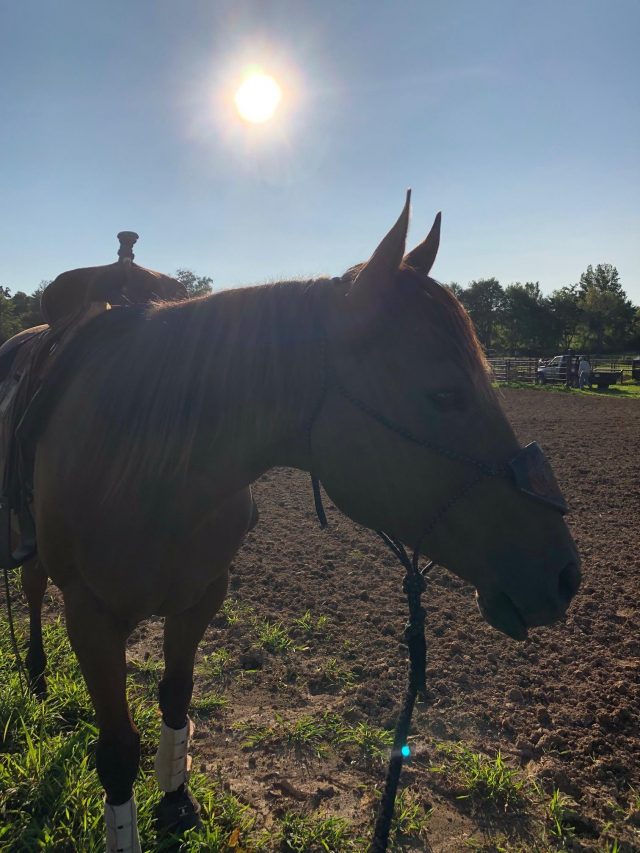 “I am happy to say that we will be submitting our final entry for Barrel Racing. To  me, this is an accomplishment in itself. When I began this journey, that was my hope for Alvie, but I was willing to take it whatever direction suited him best.”

For 673 accepted trainers, the journey to the Retired Racehorse Project‘s 2019 Thoroughbred Makeover has begun! Over the training period, three of those trainers will blog their journeys, including their triumphs and their heartbreaks, successes and failures, for Horse Nation readers. Casey French has officially submitted her final entry and considers her goals or Alvie as they move into  the final weeks before the Makeover. 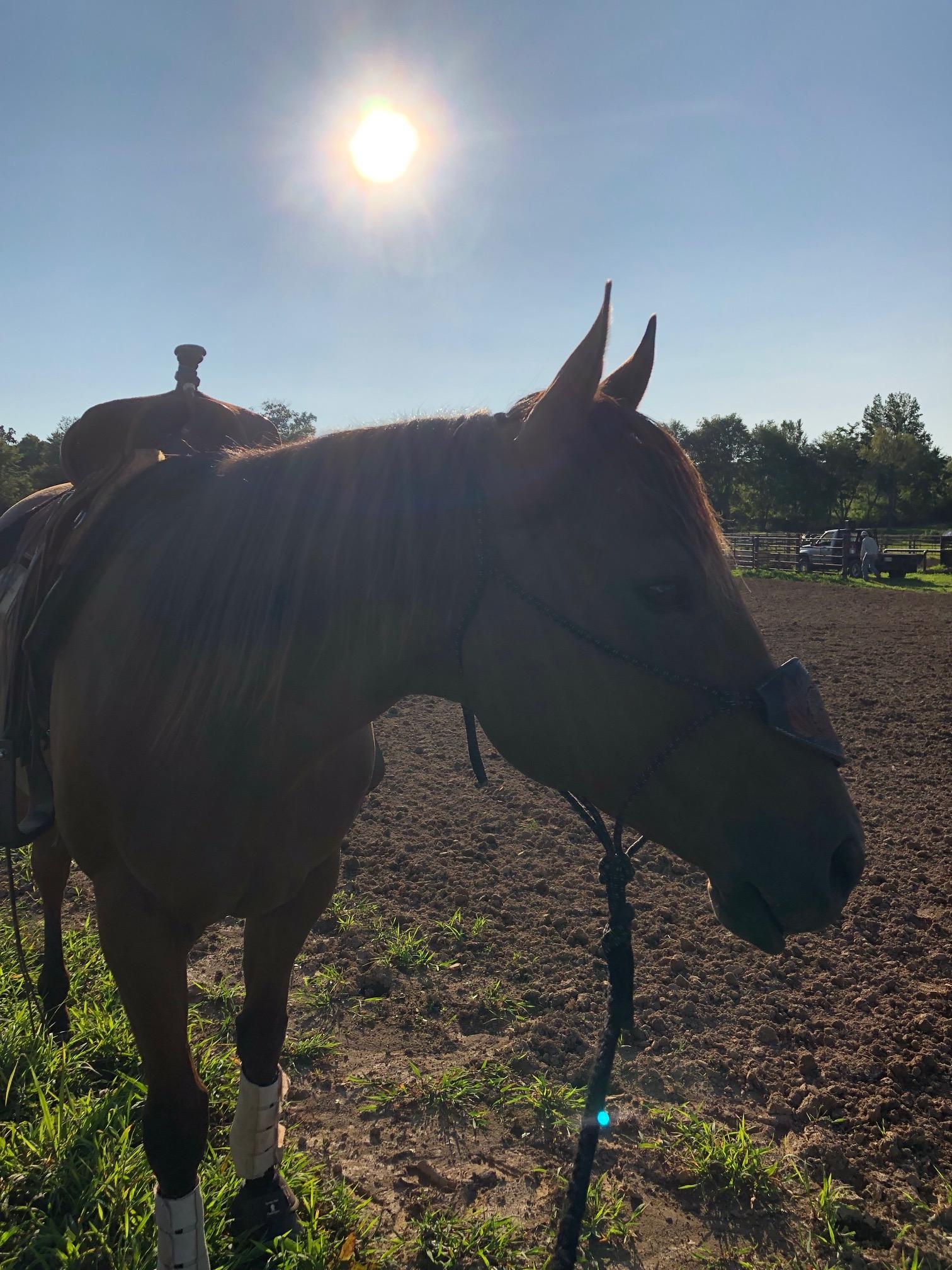 The day that I found out that I was accepted to be a trainer for the Makeover, I remember reading the words, “Some of you may not may not make it to the actual makeover.” Wait, what? How could this be, I thought to myself? But as time went on, it became clear that it’s a very real thing that many would face. We still aren’t home free by any means, but we have made it this far!

When we started in February, there were 673 trainers that were accepted to the program, and 36 who had listed Barrel Racing as their first discipline. Only time will tell how many of us end up switching disciplines — the numbers could go either direction. 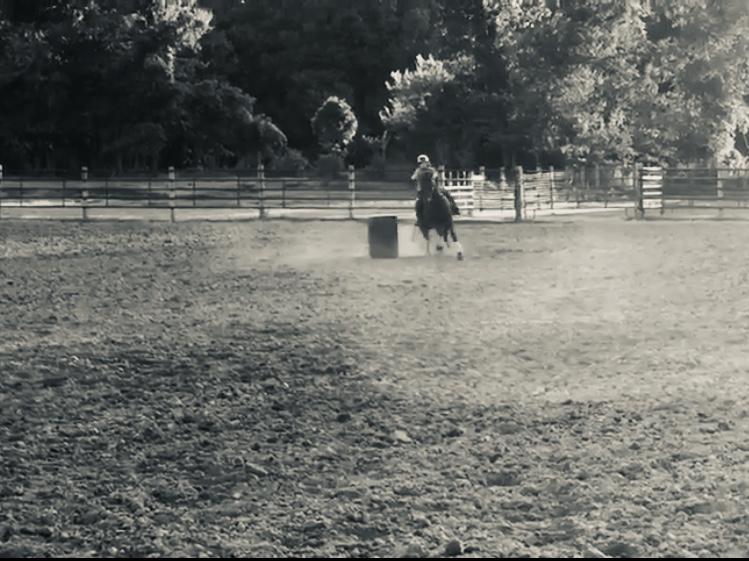 I am happy to say that we will be submitting our final entry for Barrel Racing. To  me, this is an accomplishment in itself. When I began this journey, that was my hope for Alvie, but I was willing to take it whatever direction suited him best. If that meant me putting on a pair of breeches for the first time in forever, that was what I was willing to do! One thing I feel that is of upmost importance is doing what is best for the horse. Doing what’s best for them and what’s best for us sometimes creates a conflict of interest, but it is what it is. They are not much different than we are — talented in some areas, lacking in others. 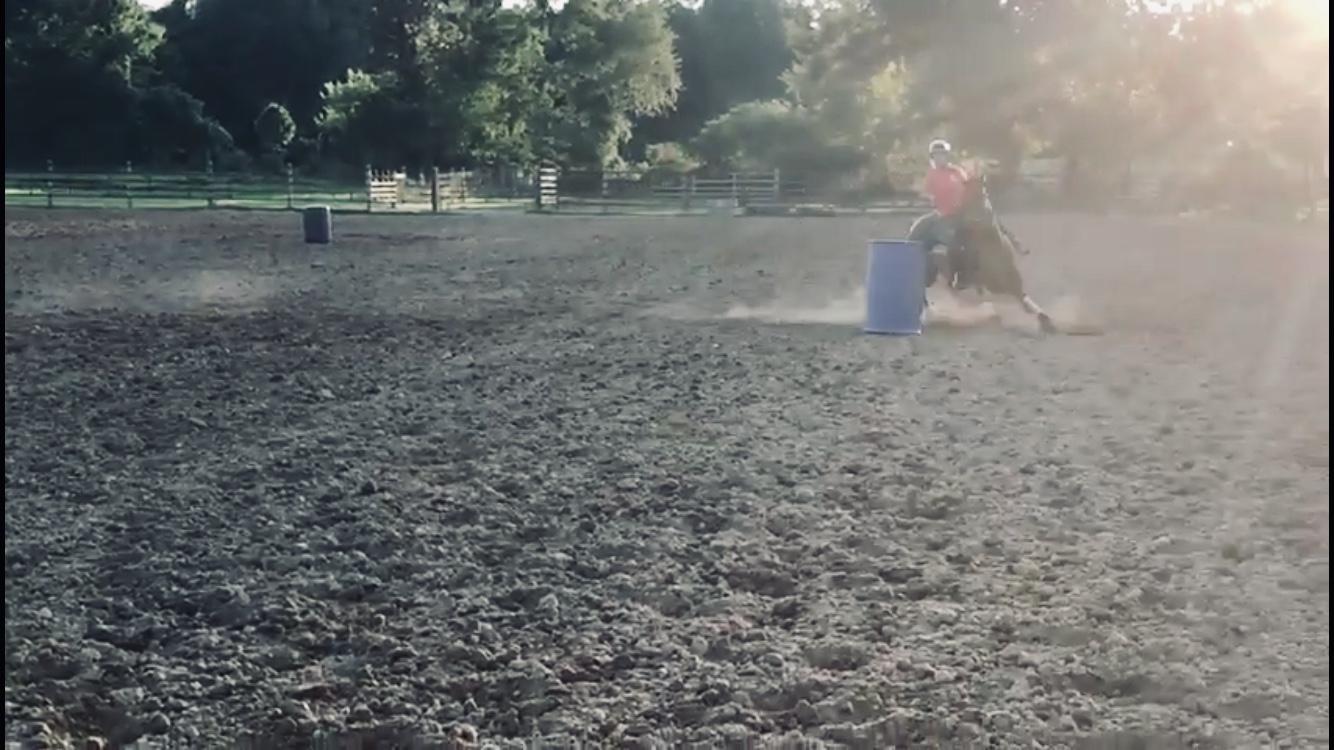 However, Alvie is starting to show a little promise in the arena! We are still at turtle speed, but things are going well. We have actually had some quick barrel horse moves lately! I’ve even had times where I gave him the day off here and there because I thought, why not? He’s on track and training beautifully, a few rest days are deserved. Not that this is really a time to relax, but I know it’s not the time to push TOO hard. With that said, I am taking it in stride, what we are when we get there is what we are. But I can finally say that I feel good about where we are now.

He has no idea what we are doing is a timed event yet, or that we are “supposed” to go fast. I’m not sure when I am going to let him in on that secret. At some point I’m going to have to clue him in, but I don’t think I’ll let him know completely for quite some time. Luckily there are many divisional events that allow horses to earn money while they are still in training and coming up the ranks. That helps things to be a little less intense when hauling a young or inexperienced horse. A lot of it is based on luck, but at least you know that you can do things at a slower pace and still have a shot at winning something. 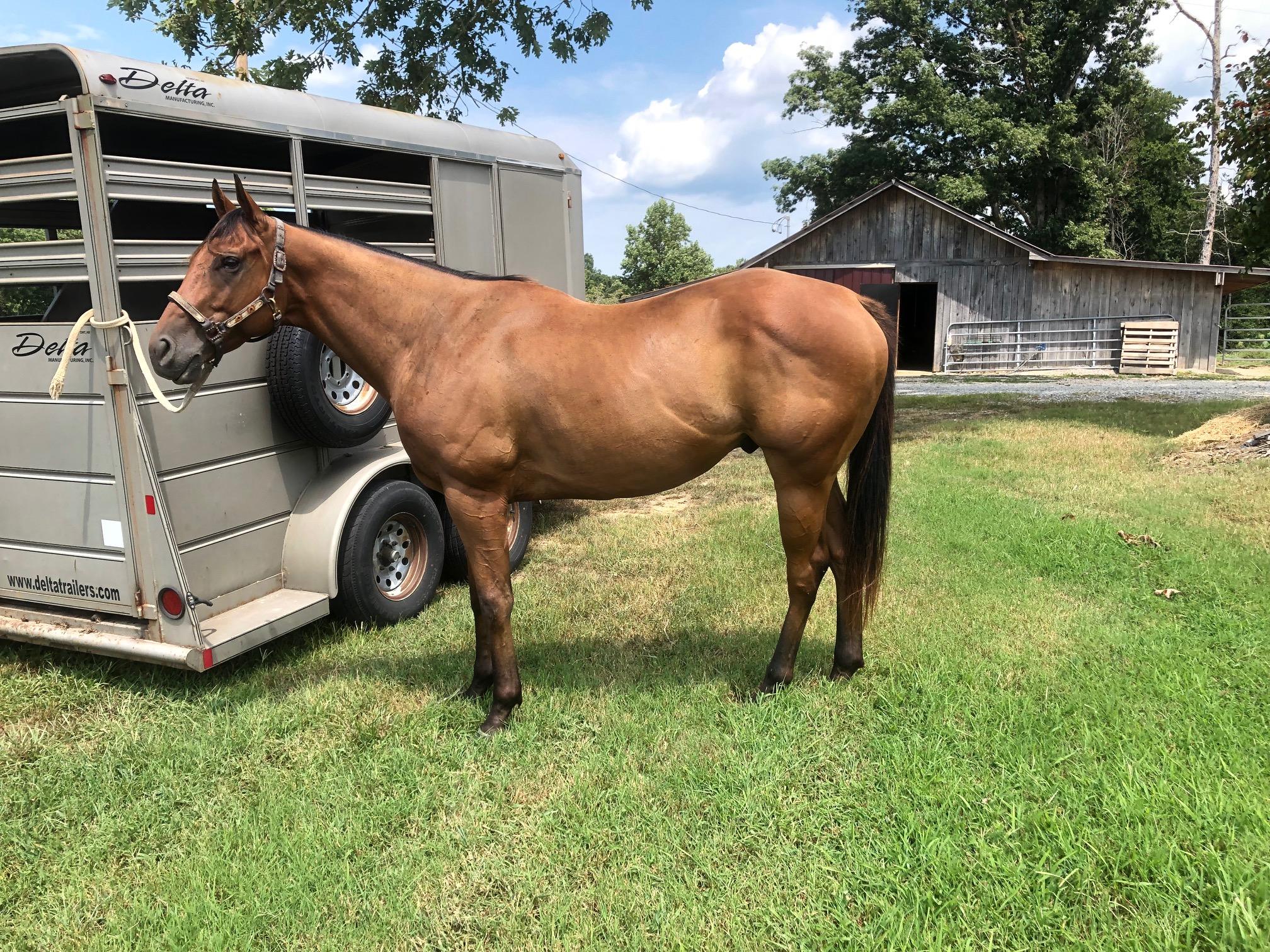 Entries close on August 15th and the only reason I have not submitted my entry yet is because I am not positive if Barrel Racing is the only event that I am going to enter. I have had Western Dressage on my mind for quite some time. I feel that my horse is totally capable, I am just not experienced in that area whatsoever!

Thankfully I have found a friend in the RRP trainers’ group who’s been quite successful in Dressage that has been really helpful in all of my questioning. I am sure she wishes I would just make a decision and stick to it by now. It would be fun to try something new, but with only a handful of dressage lessons myself, I am not sure how overwhelmed I would be. Part of me feels like maybe I should try it, part of me says stick to what you know.

Over the next few weeks I will be making that final decision — will it be a second discipline or not, that is the question!

I have set myself two goals from now until Makeover time. One, to enter a barrel race with Awesome Choice by the first of September. The second is to work as hard as I can on his health and appearance as I have my sights on the Best Conditioned Award. For me that would be such a special accomplishment for us both. I really work hard to ensure all of our horses have adequate nutrition, exercise and overall general health for optimal performance, while at the same time still letting them maintain as much of a natural lifestyle as possible being performance horses. 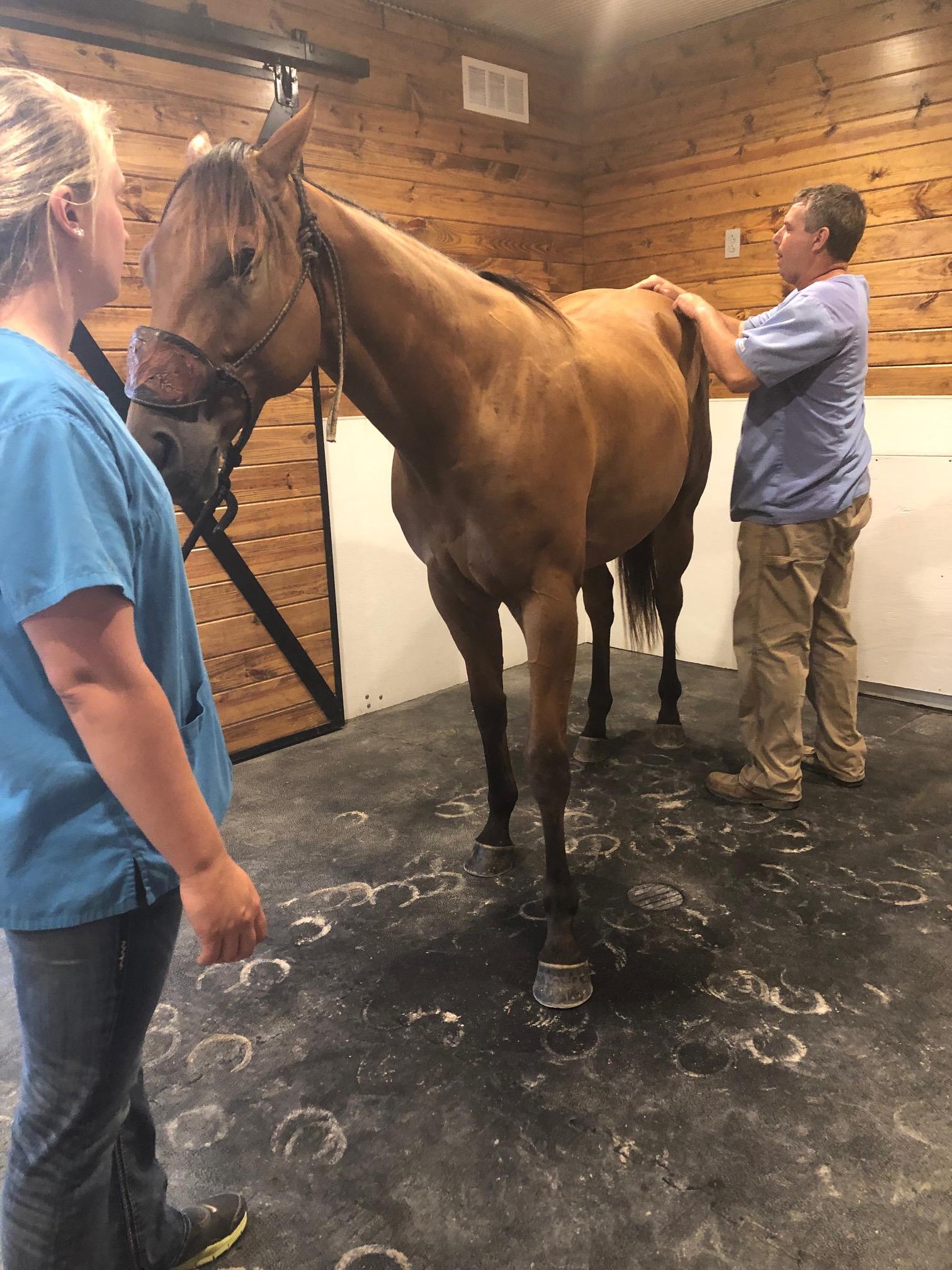 With that said, Alvie’s a bit sun-bleached, but he still shines and looks great! Hopefully the fall will bring our dark bay coat back. Until then, we will be relying on Tribute feeds, Succeed and Redmond Equine to help us in hopes of earning the coveted title!