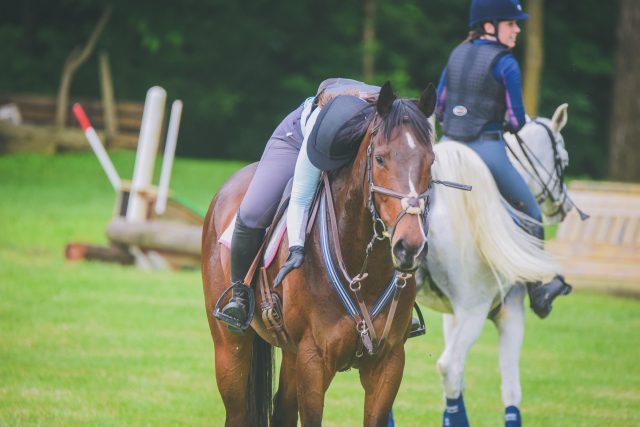 “Those game-changing moments are the most amazing feeling and they are what make all the struggles and frustrations worth it. You just have to work hard, be determined and wait for them to come.”

For 673 accepted trainers, the journey to the Retired Racehorse Project‘s 2019 Thoroughbred Makeover has begun! Over the next nine months, three of those trainers will blog their journeys, including their triumphs and their heartbreaks, successes and failures, for Horse Nation readers. Kristen Brennan shares how tears of frustration can give way to moments of enlightenment with patience and perseverance. 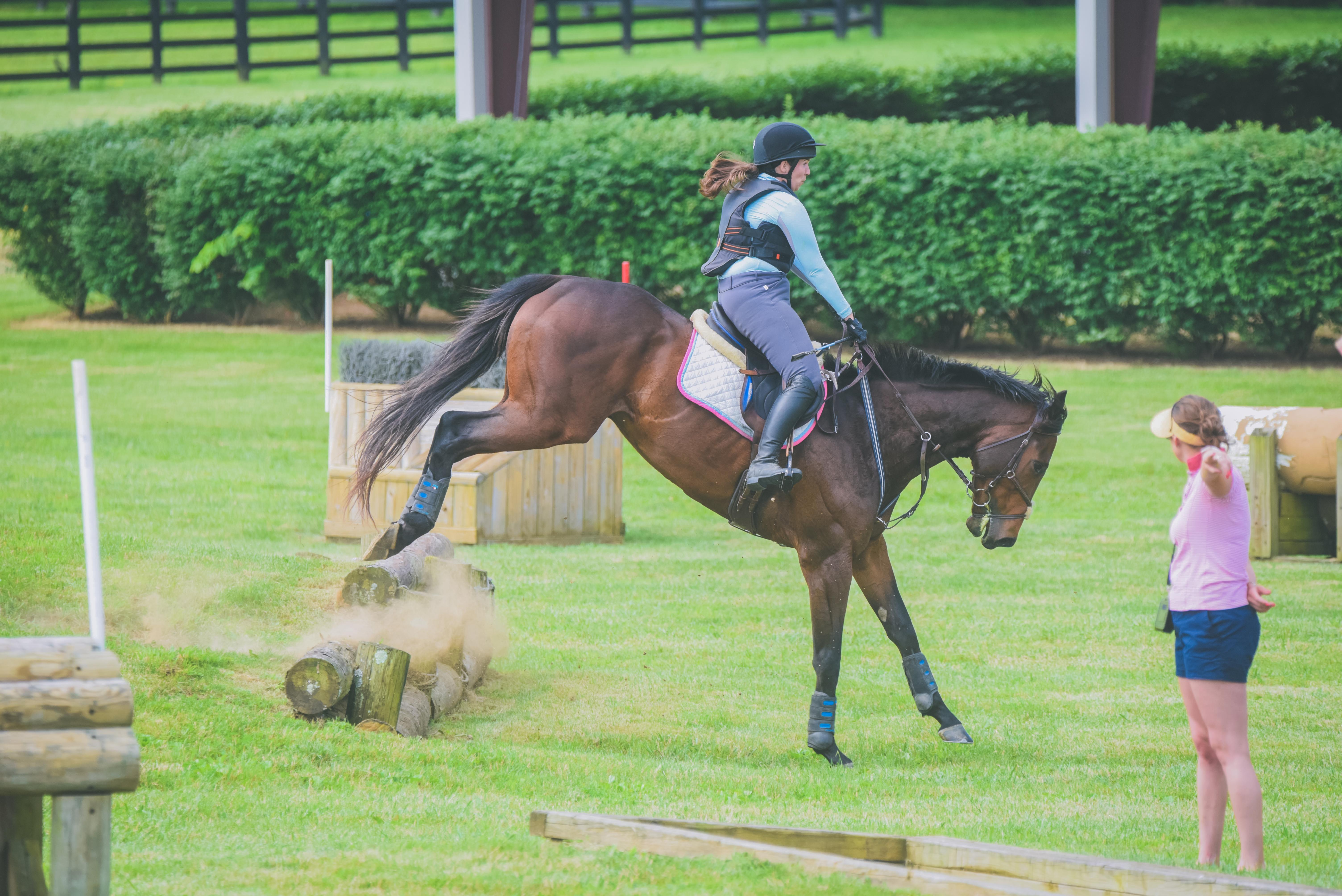 Is there anyway to make jumping down a bank not look awkward? Photo Credit : JJ Sillman.

I grew up a child of two working parents, which meant the day school ended, I was shipped off to summer camp. At camp, we had swimming lessons twice a day where we learned everything from treading water to the butterfly stroke. On the weekends, we’d head to my family’s house on the Jersey shore and apply those lessons as we spent hours swimming in the lagoon. While I found most aspects of being in the water came naturally to me, I struggled with one. Diving. Summer after summer, I spent my swim lessons at camp trying to learn how to dive. My swim instructors tried every trick in the book to get me to figure it out to no avail.

On the weekends, I would stand on our dock and practice over and over, but still end up hitting the water feet first. It was frustrating and it seemed the harder I worked, the worse it got. Then one day I stood on the dock, bent my knees, I piked my arms and pushed off into an almost perfect dive. It was a light bulb moment and from then on, there was no stopping me.

I could dive off anything — diving boards, pilings, the boat, you name it. Most people can relate to that moment where things just clicked for me and I got it. I know since then I’ve had many times, in life and in my career, where a seemingly endless struggle suddenly in one moment ends, the lightbulb goes off and I’ve felt that “Ah okay! I get it” feeling.

Developing a young horse can be frustrating. The training process is a constant game of one step forward, two steps back and a true test of patience. Geoffrey is kind and smart as the day is long, and his happy-go-lucky attitude makes him a joy to be around. But I’ve also found he can be a horse that is very slow to process when you present him with new challenges that he doesn’t quite understand.

I won’t deny that at first, I mistook this for a lack of willingness and athleticism and started to write him off as an eventing prospect. But then I reminded myself of my struggles learning to dive as a kid. Just because it was a challenge for me to figure out didn’t mean that I didn’t want to do it. I just needed to keep working hard and trying until that lightbulb moment happened.

Geoffrey and I have made a lot of progress with our flatwork and stadium jumping over the last eight months of our journey to the #TBMakeover. On the other hand, cross country has remained a big challenge. At first it took months to even get out there because mother nature kept interfering whenever we had a cross country school scheduled. When we finally got to school, I had high hopes — the few months’ delay meant lots of lessons and our stadium jumping had improved astronomically. As I tacked up for that first cross-country lesson, I had visions of confidently clocking around the BN course with ease as the rest of the group watched in awe. After warming up I picked up a trot and headed for a tiny log. And we did a drive by. Not what I had envisioned, but no big deal. We headed back, tried again and yet again he ran out. 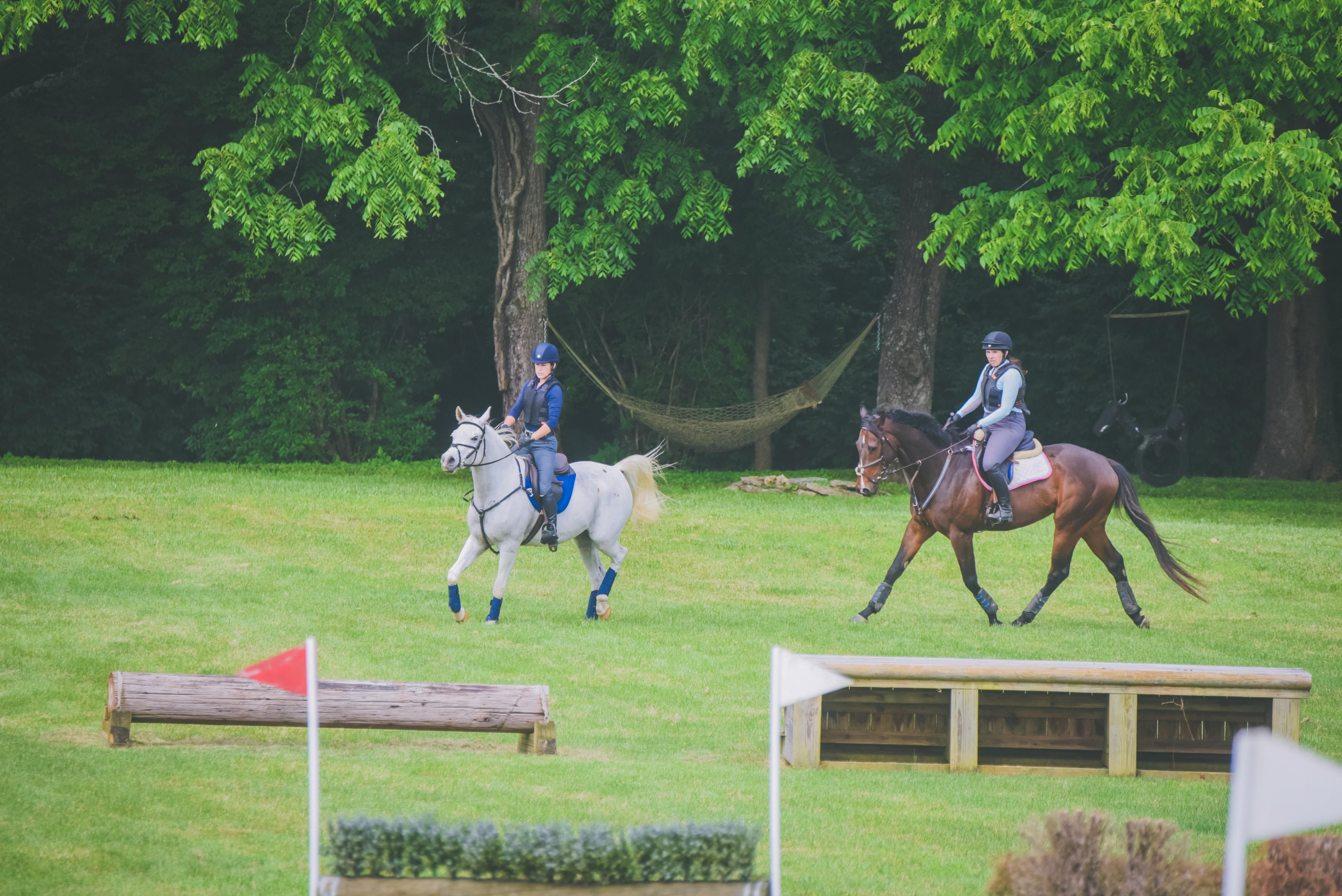 Getting a lead from our friends Jasmin and Saheeb. Photo Credit : JJ Sillman.

This went on about five times before we got a lead from a pony and Geoffrey jumped it. It was spectacularly ugly — he jumped like a deer throwing me off balance and quickly wiping away those visions of BN perfection from my mind. That first jump set the pattern for the rest of the schooling, leaving me frustrated despite my trainer’s insistence that what happened was totally normal with young horses. I headed home feeling pretty low.

Yet we kept at it. Every lesson ended with going out to the cross country field and asking him to jump a few tiny logs. It was ugly every time and I grew more discouraged because Geoffrey just did not seem to understand what I was asking on cross country despite jumping around perfect stadium rounds moments before. For every other challenge, it seemed like though he was slow to process the question, the lightbulb moment eventually happened. But log after log, that moment never seemed to transpire on cross country.

Even worse, I felt like an idiot because I had been so confident that cross country would be a breeze that I had signed up for a clinic with 5* rider Lillian Heard before we had even attempted our first schooling. While Lillian has the patience of a saint, I was a bit panicked that it would be a complete waste of money and a source of embarrassment when we couldn’t get over a single fence. It felt like I had been asked to dive off the high board when I couldn’t master diving off the side of the pool.

The morning of the clinic, Lillian had us trot down to an embarrassingly small log to warm up. And we stopped. And stopped. We got a lead from a friend hoping he would follow her horse, but again we stopped. As a result, I started thinking we would never “get it” and our confidence in each other spiraled downward.

After about 12 refusals and on the verge of tears, we finally got over it. And it was ugly. But we jumped it again, and each time it was a little bit smoother. Then something happened. Suddenly, jumping that same log again, we had a light bulb moment as Geoffrey finally understood what we were asking. 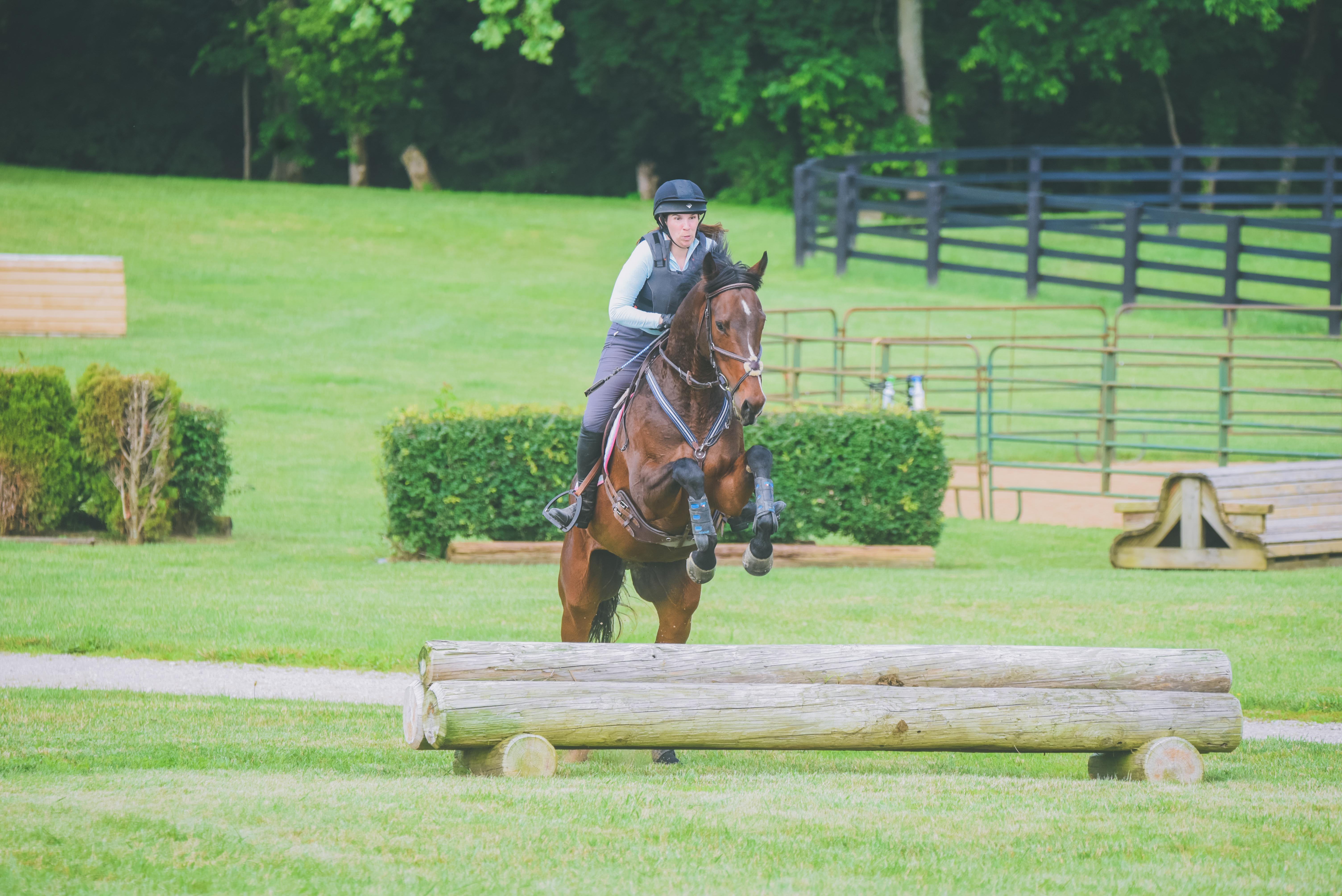 We had one more stop that day, but he got bolder and bolder with each question we asked him. Logs became no big deal. He confidently leapt off the bank and turned around and jumped up it without hesitation. I think he even had his eyes closed over the open ditch.

Just like that day on the dock when I was learning to dive, it’s been Game On since that light bulb moment. We still have our fair share of stops, but they always stem from my lack of confidence, not his. He is willing and bold on cross country and if I give him a good ride, he doesn’t bat an eye. Even when we do have stops, I don’t shut down anymore and instead I try to fix what I am doing to give him a better ride. When I do, he jumps without question. 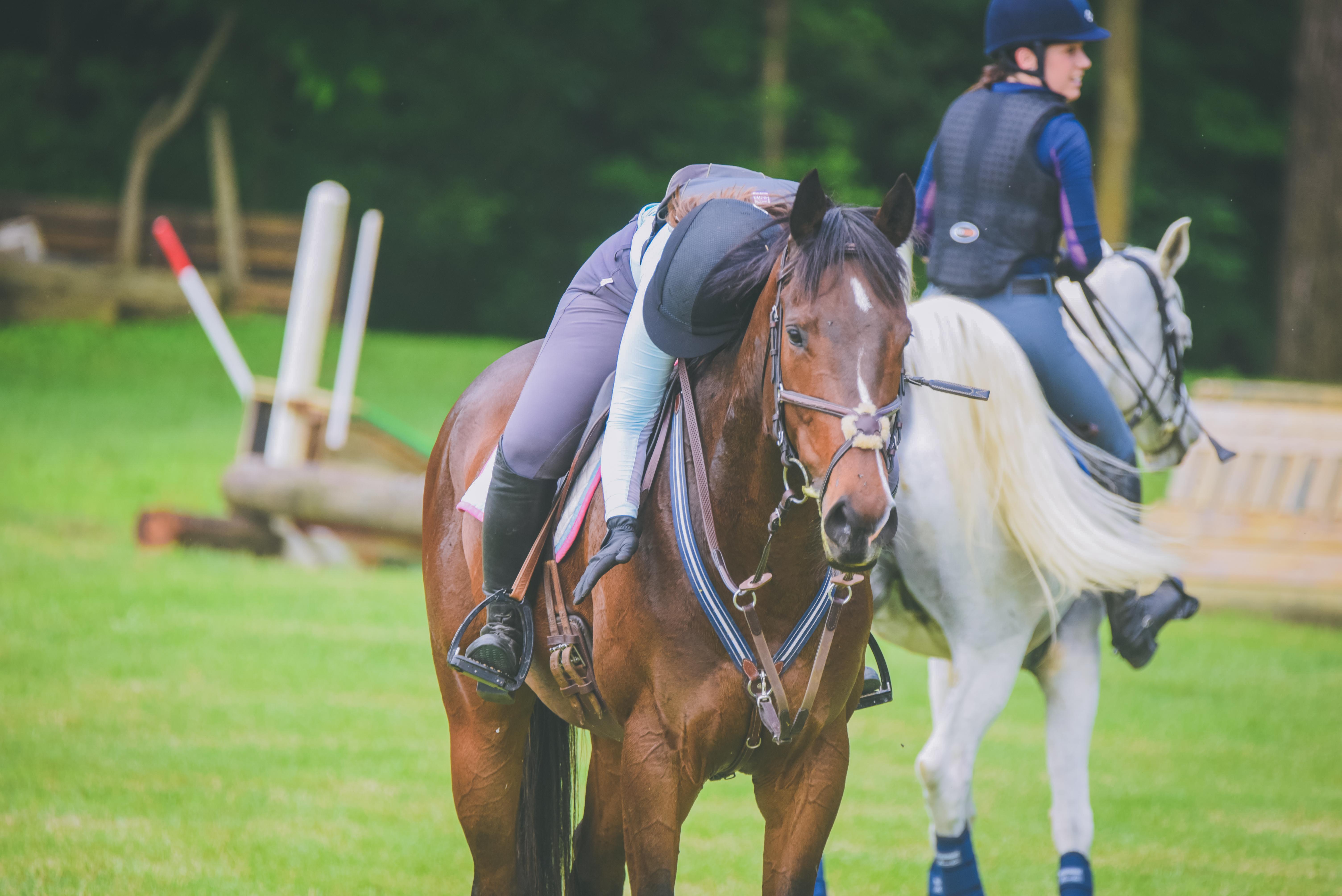 Showing my gratitude to the horse that tries so hard for me. Photo Credit : JJ Sillman.

We completed our first mini horse trial without a cross country penalty and then went on to school the next higher level confidently. Though we will always be a work in progress, starting Geoffrey on cross country has taught me that patience and persistence are what lead to the light bulb moments with young horses. Those game-changing moments are the most amazing feeling and they are what make all the struggles and frustrations worth it. You just have to work hard, be determined and wait for them to come. 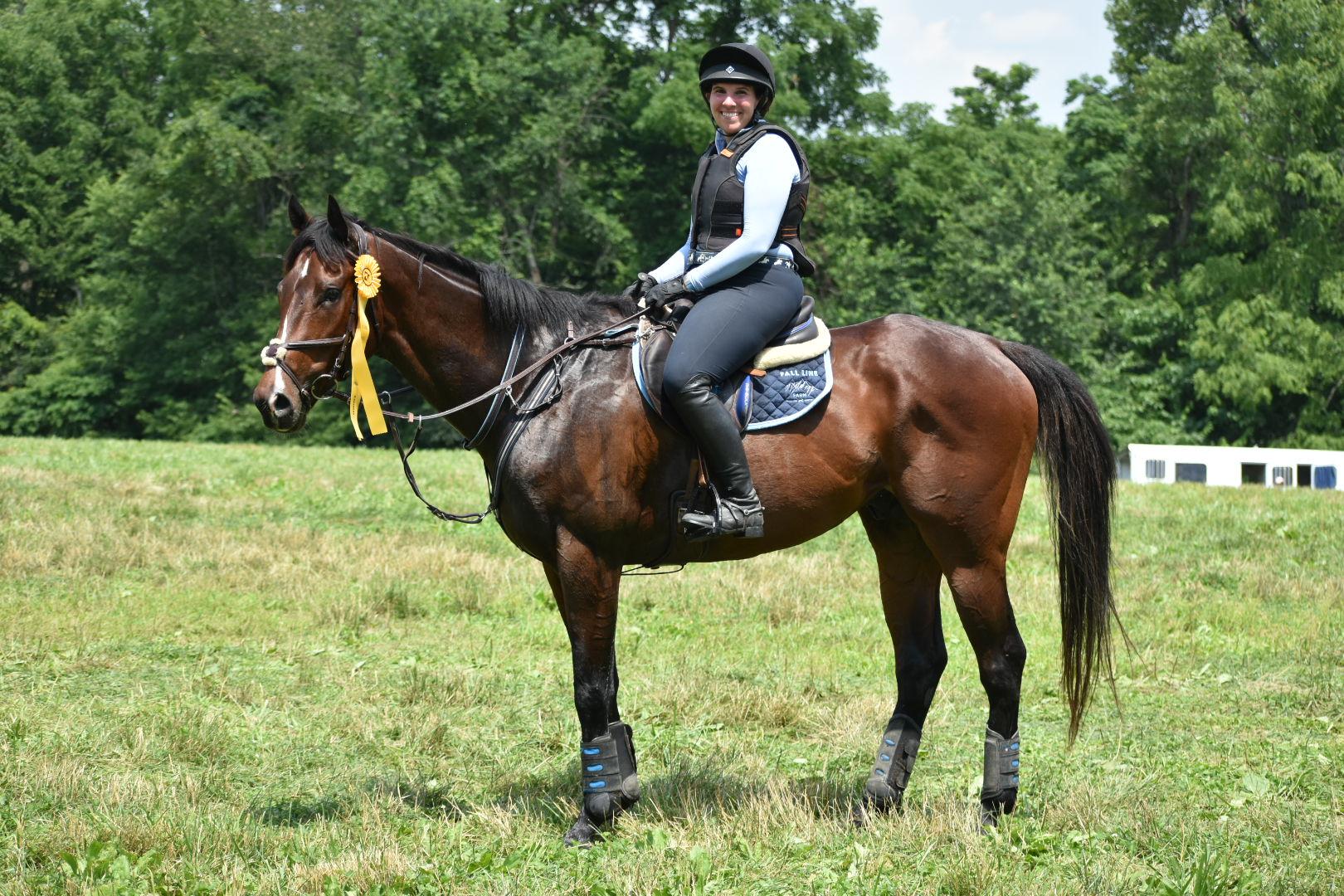