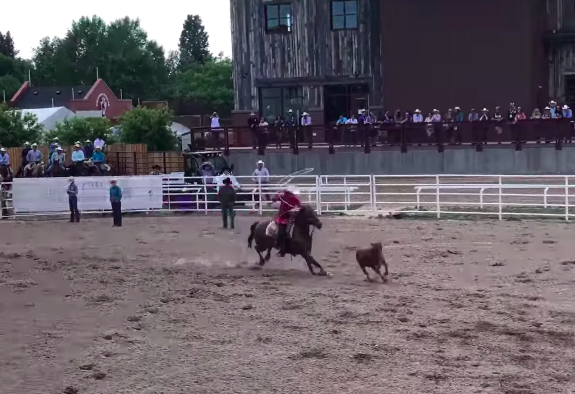 In the FIRST-EVER women’s breakaway roping event at the Cheyenne Frontier Days, Jordan Jo Fabrizio wins it with a 4.18-second-run.

For the first time in the 122 years since its inception , the Cheyenne Frontier Days added women’s breakaway roping. The event drew 242 entries and when the tournament-style competition ended, seven of the 16 ropers in the championship round turned in times in the four-second range.

However, Jordan Jo Fabrizio of Canyon, Texas, was the fastest of the seven with a 4.18 second run.

Fabrizio is the first breakaway roper in the CFD record book with winnings of more than $17,500.

“All of the breakaway ropers took time to take a group photo in front of the grandstand before the finals today and it really hit me how historic this is,” said Fabrizio. “This will be something I’ll never forget and always treasure.”

As part of her inspiration, Fabrizio wore a CFD champion tie-down roping buckle won by Raymond Hollabaugh in 1983. Fabrizio spent five years competing in college rodeo for West Texas A & M University where Hollabaugh is the coach.

Keep Fabrizio in your mind as you strive to make history in your own way, Horse Nation. And, remember — go riding!