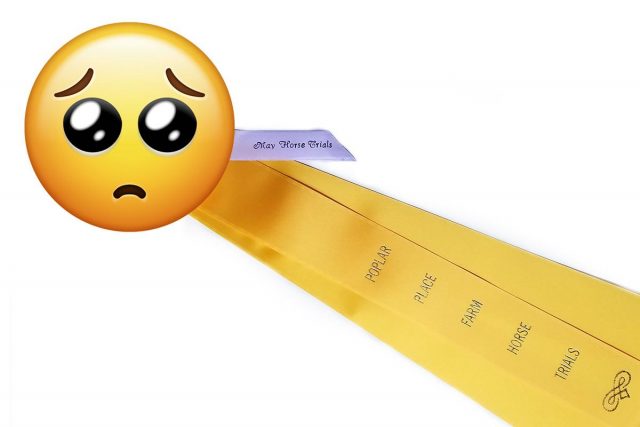 In this week’s Lessons Learned, Ainsley Jacobs grapples with a disappointing ride and an outcome she didn’t expect. 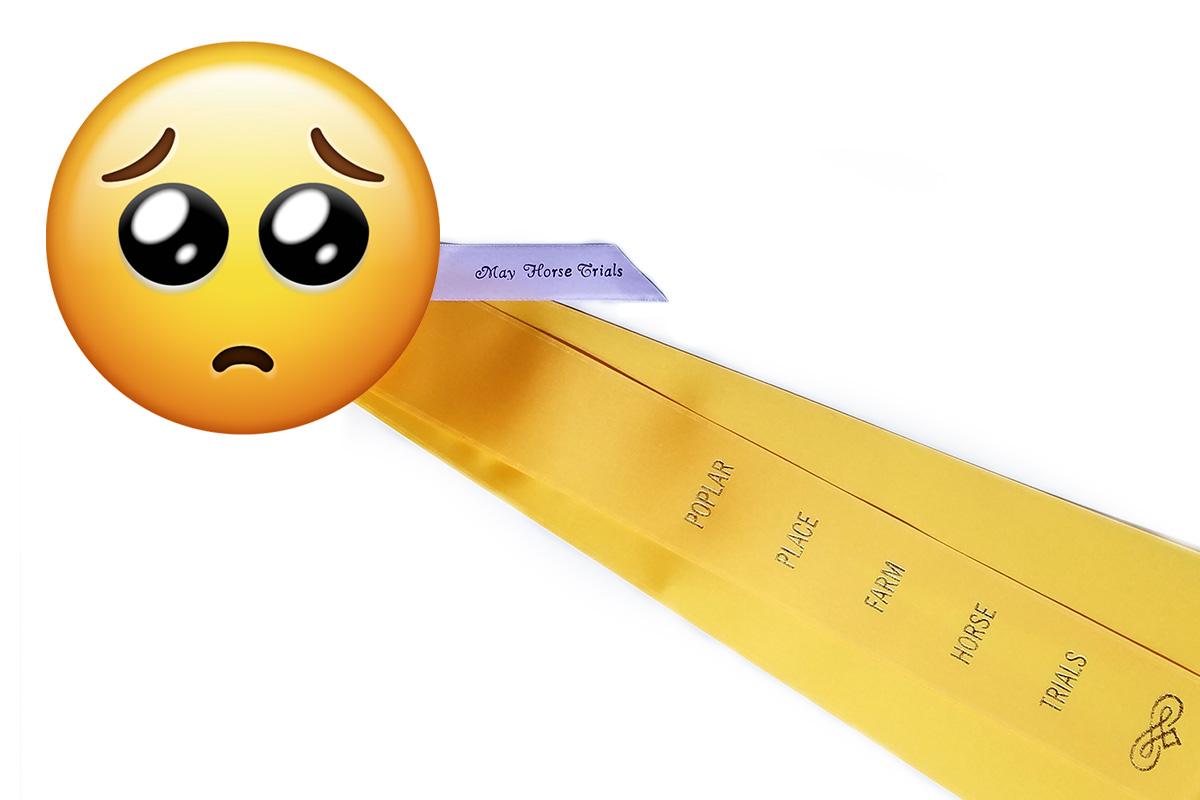 My face when I picked up this ribbon :C (Also, literally the only photo I have from the event.) Photo by Ainsley Jacobs/Ride Heels Down

It’s been two and a half months since our last 3-phase and I was excited to get back at it after spending a week at the LRK3DE vending my awesome Ride Heels Down apparel. <<< Shameless plug. 😉

I was feeling pretty low-key about this event, a Novice Horse Trials, since I would be going on my own – my awesome coach Lauren Turner of River Birch Farm had other plans, my husband was away on a work trip and no one else from my barn was going… whatevs.

I celebrated my “not stressing at all”-ness by going to the Dover tent sale on Friday morning, buying stuff I didn’t need and wasting time helping my friends spend their money, too, before I headed over to Beaumont Farm to grab my trailer. And JJ.

The drive to Poplar Place Farm was three hours and totally boring, which I guess is a good thing. I got JJ settled in and went off to walk my cross country course. All alone. With no adultier-adult supervision to help me not make bad decisions.

It was all stuff we had jumped before and the course seemed pretty straightforward. I was feeling confident after The Novice Olympics in Florida earlier this year, and the only thing I wasn’t entirely sure about was the 8AB combination – I could either do a half coffin (which we’ve already done a thousand times) or go for the weird-line-tiny-jump-option off to the side… as much as I wanted to be a badass and just go for the ditch, I figured this was probably a good time for me to be a wuss and take the easier route – only three people in my class meant I would end the weekend with an AEC-qualifying score as long as I didn’t get eliminated. NO PRESSURE!

(Note: The USEA AEC Qualifications page outlines qualifying placings as “in any USEA recognized Novice Horse Trials (or) Novice Three-Day competition.” It does not specify a minimum competitor count for a class to be eligible for qualifying scores… but someone mentioned to me this weekend you need 5 entries to be eligible. Can someone clarify/confirm for me??)

Saturday morning was fairly stress free. I braided, headed down to dressage, and – as usual – JJ felt good in warmup but we were slightly off our game once we went into the actual arena. Regardless, it felt like a good test and I thought we had done a pretty decent job.

I spent the afternoon having lunch, hanging out with my friend Heather Allen and her awesome mom, Valerie, who stabled with me, and took a nap. Finally, it was time for the fun part!

JJ warmed up well and felt keen to go for cross country. The starter counted us down, told us to “have a great ride,” and we were on our way. The first six jumps all felt like easy peasy little speed bumps and I was having a lot of fun. We came into the 7AB combo, an upright fence to a down bank with a log, and I tried my best to ride confidently because I didn’t want to take anything for granted. The following happened…

So, I circled back around and JJ hopped down like it was the easiest thing in the world. UGH. I knew we had just incurred a massive 20 point penalty and all my AEC hopes and dreams for the weekend were shot since the placing score must also be on a clear XC round, but I wanted to still focus on making the best of the rest of the ride.

We got through all the other jumps without any issues, and they were all easy as well. There was a nice section through the woods before the final jump where I had planned to trot if we needed to kill time, but since the stop/circle I knew we would be cutting it close. I checked my watch and saw I had 26 seconds left to go, so I legged JJ on instead and we flew over the last fence and across the finish with a full TWO seconds to spare before Optimum. So, at least we didn’t add any time penalties to the 20.

That night, Poplar’s owner, Launa DesPortes, generously hosted a really awesome Kentucky Derby/Cinco de Mayo combination competitors’ party with food, booze and a viewing of the race. It was a nice way to unwind after a somewhat depressing day.

On Sunday, I felt like I had nothing left to lose, so I went into stadium with minimal nerves. Our score was already bad, so other than me falling off, we really couldn’t make it much worse… JJ warmed up well, felt nice and springy over all the initial jumps and so we went in to “get it over with” on schedule.

The stadium jump course was pretty twisty-turny, but it rode just fine. JJ was a good partner, as usual, until jump #3 – it had a stone wall box, and I tried to ride it defensively, but just like at our last event, he stopped at it. I circled back and he popped right over, of course, then went on to finish the course with only a tiny bit of time. I’m really getting tired of this stopping thing he’s started doing lately. JJ, please stop stopping!

If I’m going to be completely honest, I’ll say it – I’m seriously disappointed, in myself most of all. It just seems like we aren’t destined to be winners. If we do well, we’re still always mid-pack. Or last. It’s frustrating.

I’ll admit, I’m crying a bit as I write this. Our dressage, which felt really good for us, was actually one of our worst scores ever. (For those curious, it was a 40.5.) Even when JJ picked up the wrong lead and went around like a giraffe at Training, a level higher, we still scored better than we did this weekend. This felt like a slap in the face to all our hard work, especially considering the other two horses were in the 20s.

I know I shouldn’t get down on myself, but it’s so hard not to… After years of doing this, it would be nice to get the blue ribbon validation. Even just once.

I’m trying to be grateful for the fact that I’m even here at all, able to get through a Novice Horse Trials on my own and, with the exception of the down bank, to do it easily, instead of where I was a few years ago: crying – and scratching – in Beginner Novice stadium warm up. But, it’s hard to keep being positive when all the results say otherwise, and I’m starting to question my ability as a rider. Maybe I’m really not as good as I like to hope I am.

But then I’m going to Suck It Up, Buttercup, and I’m going to kick on to the Area III Championships in a few weeks – which we (barely) qualified for.

I was talking with my friend, Marian Bickers of Cornerstone Equestrian, before going out for cross country and I made a joke that ‘JJ better make good decisions if he wants me to drive him home tomorrow,’ and it made me realize that, if something happened to me at the event, I had no idea who would be JJ’s “emergency contact.” So, if you show alone, make sure you’ve got a backup plan on how to get your horse home – just in case!