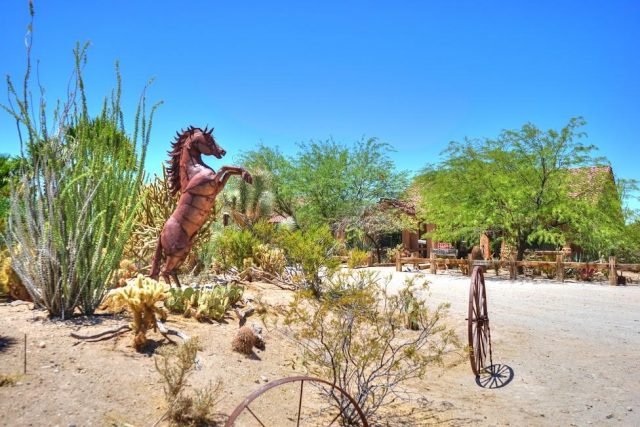 If you’ve ever wanted to visit the sites of your favorite movies from the back of a horse, Tony Daly offers this definitive guide of where to go.

Whether we watch them on the big screen or the small screen, movies don’t just broaden our perspective; they also inspire us to see more of the world, set-jetting — one of the latest buzzwords in travel.

Long before the term came into being, Western movies stirred a passion in many of us, some hooked on horseback riding by those first few brushes with the real Wild West. Take Tony Daly for example, whose initial stay at Arizona’s Tanque Verde Guest Ranch lead to a complete career change.

Now Managing Director of riding holiday specialist, Ranch Rider, Tony is taking the reins with his set-jetting inspiration for 2019. His list covers everything from live-action modern-day Westerns to Disney’s CGI remake of The Lion King.

Hear the roar of The Lion King on horseback

Released earlier this month, The Lion King movie may be a remake, but with its clever use of pioneering CGI technology, it’s as though you are really being transported to Africa’s open savannah. Staying true to the original storyline, the film is a showstopper, the incredible visuals loosely based on the Serengeti national park, the 1994 animated version drawing safari-goers to Tanzania in their droves.

A UNESCO World Heritage site, and arguably one of Africa’s best national parks, the Serengeti’s 5,700 square miles are dominated yearly by huge herds of wildebeest, 1.7 million of them making their annual passage in search of greener pastures.

Of course, with their movements based on the rains, there are no guarantees of sighting the famous wildlife spectacle, but the Serengeti packs some punch on the animal encounter front year-round, with 10,000 lions (the world lion population is around 25,000) and the greatest concentration of plains game in Africa residing in what is Tanzania’s oldest protected area.

While most people would choose to visit the park on a game drive, you can also book a front row saddle to the Serengeti’s main event, the Serengeti Migration Safari, exploring Piyaya and taking riders across a remote and little-visited part of the national park’s ecosystem.

The landscape is rugged, the open, sweeping grasslands interspersed with striking granite kopjes and adjoining the Serengeti-Mara ecosystem and Ngorongoro Conservation Area, the eastern corridor of the Serengeti, is teeming with magnificent wildlife.

The Ranch Rider team will be exploring Tanzania’s endless plains on horseback this September.

America’s legendary Wild West figures are some of the world’s most intriguing characters, with the entire frontier era reading like a sure-fire Hollywood blockbuster. The rich tapestry of stories from the Battle of the OK Corral to the Wild Bill Hickok vs. Davis Tutt duel are made for movie moments, some of the oldest films to date having a timeless appeal. 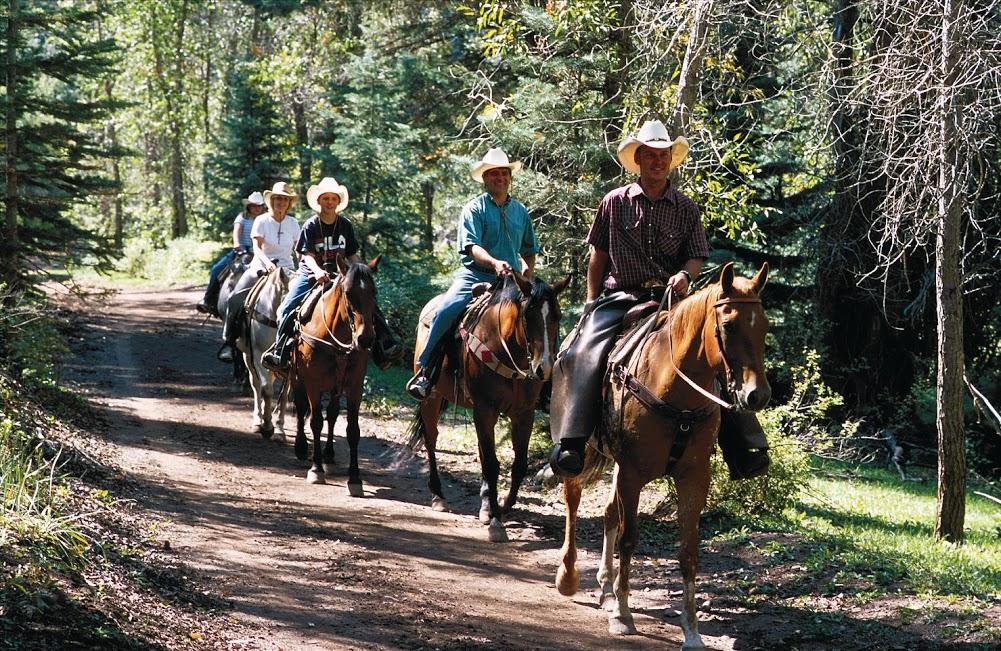 This year will mark 50 years (24th of October) since the release of the classic Western, Butch Cassidy and the Sundance Kid, and with Colorado’s Durango to Silverton Narrow Gauge Railroad making an appearance in the 1969 movie, it’s the ideal time to jump aboard. Around three and a half hours each way, the scenery is compelling, the vintage steam train winding its way through spectacular canyons in the remote wilderness of the two-million acre San Juan National Forest — the city of Durango a mere few miles from the Colorado Trails Guest Ranch. 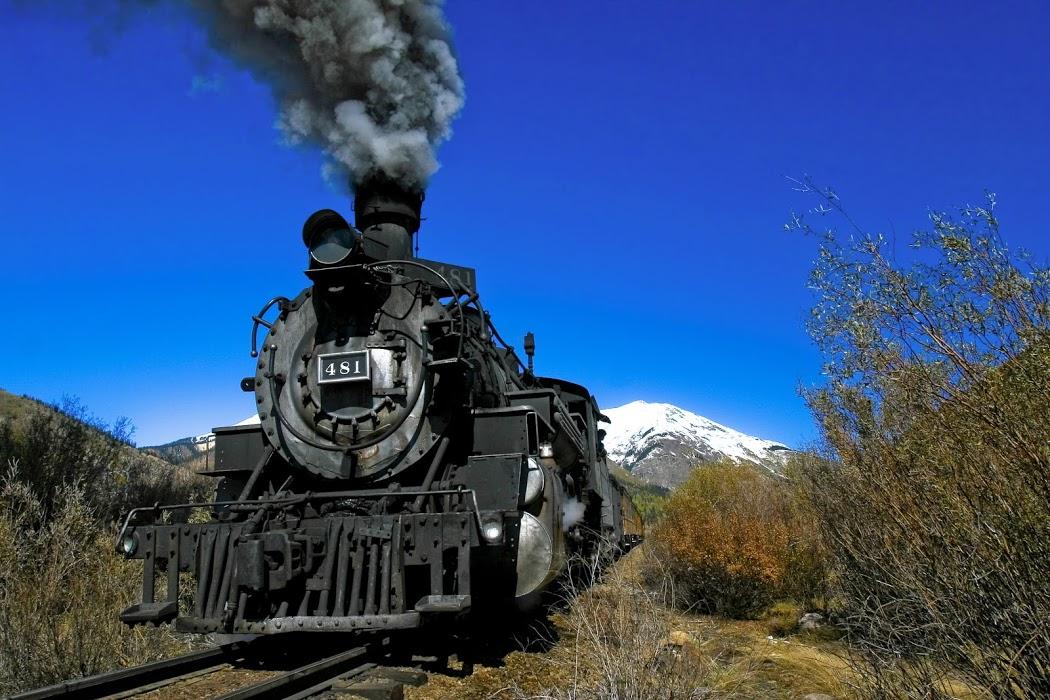 Ride back in time with Billy the Kid

Fast forward to March 2019 and The Kid, the semi-autobiographical Western action movie filmed in Santa Fe New Mexico, where echoes of the famous outlaw still ring out. The story includes the gun battle in which Old West lawman, bartender and customs agent, Pat Garrett, is said to have killed Billy — but the real location for the gunfight is Fort Sumner. 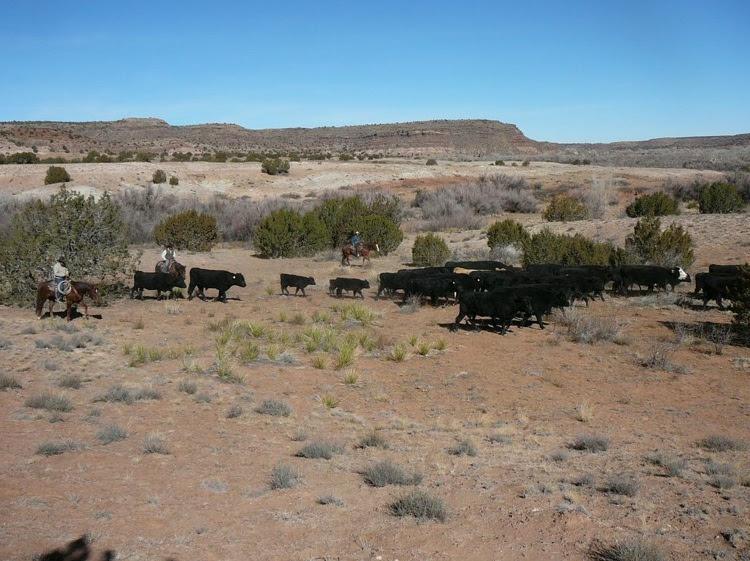 Billy the Kid’s grave and a dedicated museum is only 40 miles away from Santa Rosa’s Creek Working Ranch. Situated on 8,200-acres in the Pecos River Valley, the ranch’s red desert surrounds and the neighboring town of Puerto De Luna were also regular hang outs for the Western legend, so you can expect to hear plenty of interesting storytelling around the campfire.

Keeping the spirit of Tombstone alive

Described as one of the most beloved modern-day Westerns, Tombstone might have graced the Big Screen back in 1993, but A-listers from the movie are regulars at the Annual DOC Holli-DAYS, the next big event scheduled to be held on the weekend of the 10th and 11th of August.

A chance to pay tribute to one of Tombstone’s most colorful characters, the weekend event is dedicated to celebrating the life and legend of John Henry “Doc” Holliday. Always a star-studded occasion, this year Michael Biehn (who played Doc’s most famous Nemesis, Johnny Ringo in the movie Tombstone) is being billed as the featured guest. 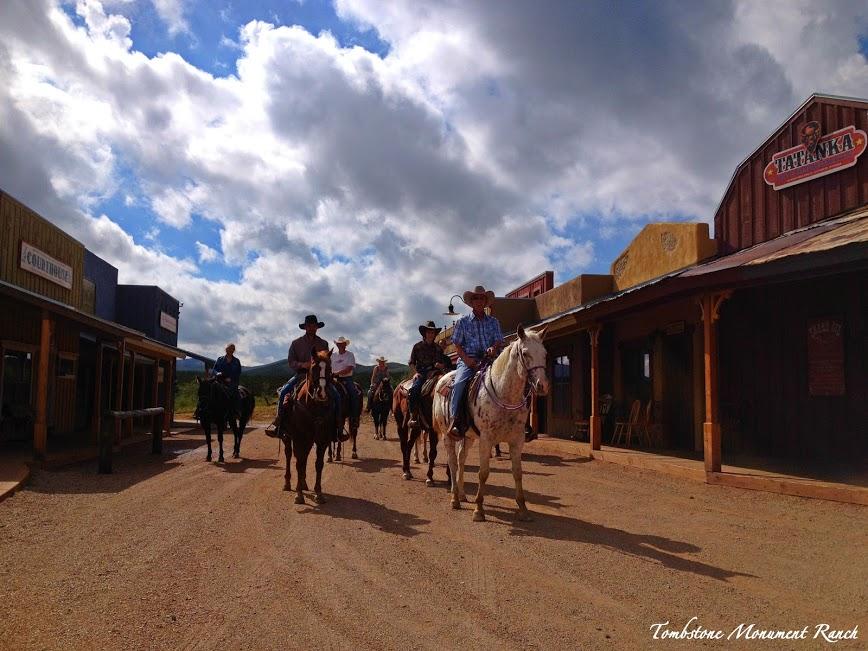 Only a few miles from Arizona’s Tombstone Monument Ranch, the property is the ideal place to stay during the festivities. It’s also the perfect hideout for anyone looking to get into character, the entire ranch fitted out like a frontier Western town.

Go set-jetting in the Dragoon Mountains, one of the main filming locations for Tombstone, with Native American Charlie One Horse helping guests to explore the area where Apache Chief Cochise and the Warrior Geronimo had a stronghold.

Deadwood: The Movie first aired on HBO back in the spring. The film followed on from the Deadwood TV series, which featured real historical figures, including American army generals, gold miners, gunslingers and sheriffs, and actual past events.

The synopsis for the latest reincarnation reads, “Former rivalries are reignited, alliances are tested and old wounds are reopened, as all are left to navigate the inevitable changes that modernity and time have wrought.” So, expect more of the same wrapped up into one hour and 50 minutes. 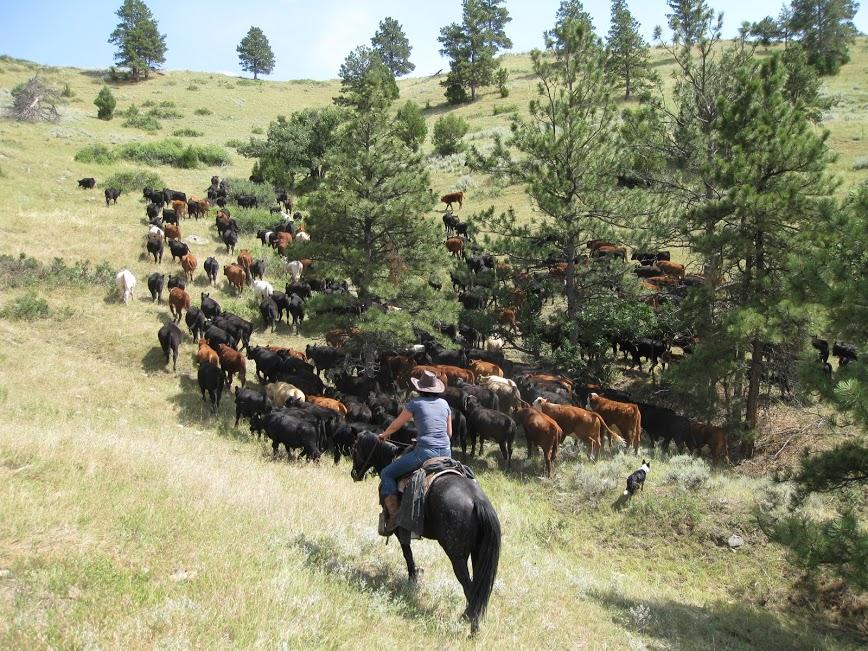 Wyoming’s New Haven Working Ranch is perfectly located for Deadwood film fans. A cattle, horse and sheep ranch lying close to the border of South Dakota, the cowhands often cross state lines to help out with their neighbor’s cattle. The horseback adventures cover challenging terrain and the property is a mere 2 hour drive from the gold digger town.

Star in your own Western

Based in the Mojave Desert in northwest Arizona, the Stagecoach Trails Guest Ranch is the perfect place to star in your own Western. The owners purchased the actual stagecoach featured in The Magnificent Seven movie earlier this year. 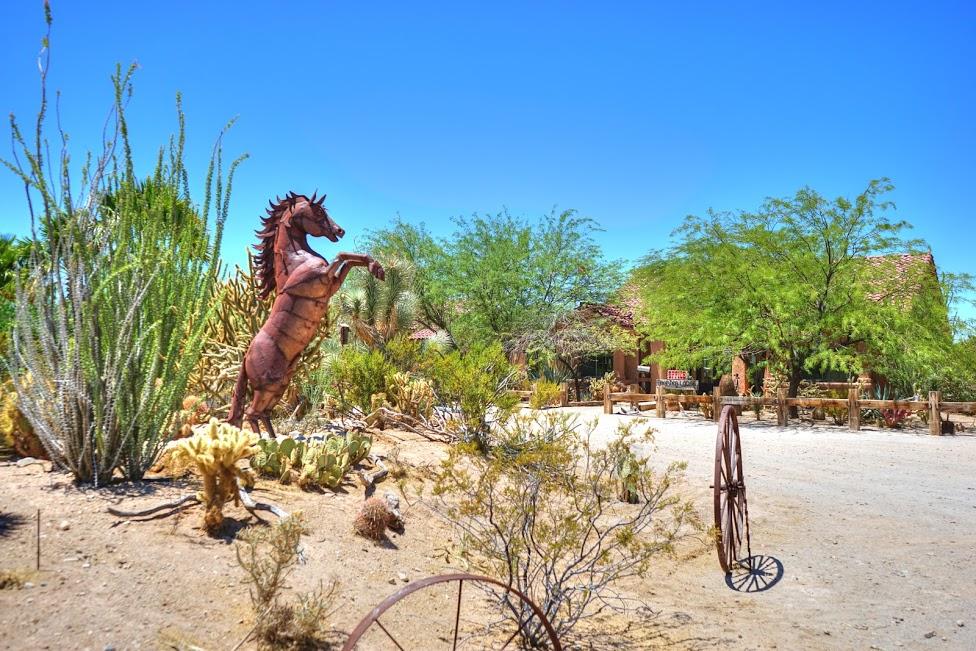 Aside from taking rides the Old West way, the list of activities includes horseback riding, hiking, archery, wagon rides and even cowboy action shooting — the ranch’s gunslinger night gives guests the opportunity to see if they have the quick draw skills of those of the past.

Ranch Rider is an independent riding holiday specialist, its handpicked collection of horseback adventures covering the USA, Canada, Argentina, South Africa, Botswana, Namibia, and Tanzania. A keen rider himself, Managing Director, Tony Daly switched careers from accountancy to tourism after a week at Arizona’s Tanque Verde Resort Ranch, and almost overnight, Ranch Rider was born. Now the company has been operating for over 25 years, the team constantly adding new experiences to the mix, from pack trips in North America’s backcountry to riding safaris in Africa – its aim to offer horse riding holidays for everyone. Ranch Rider PROTECTED No 4660 ABTA 96395/V9150. 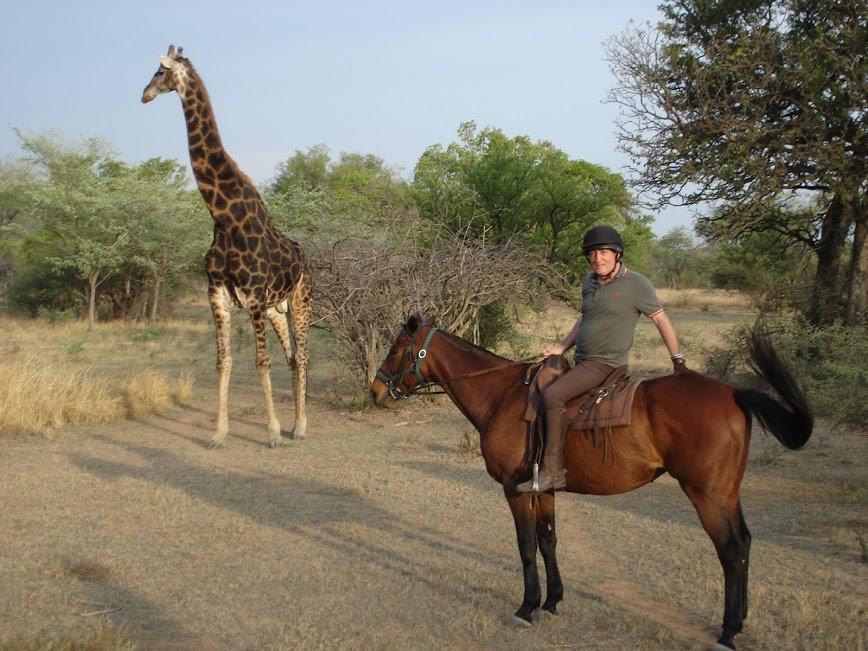